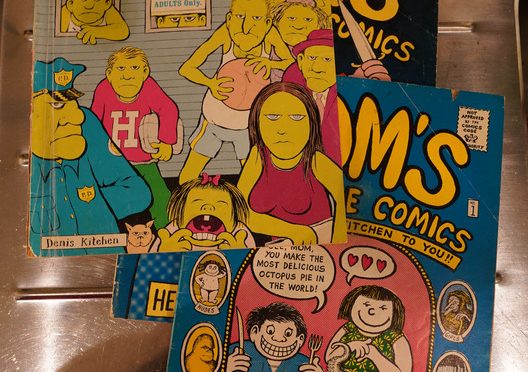 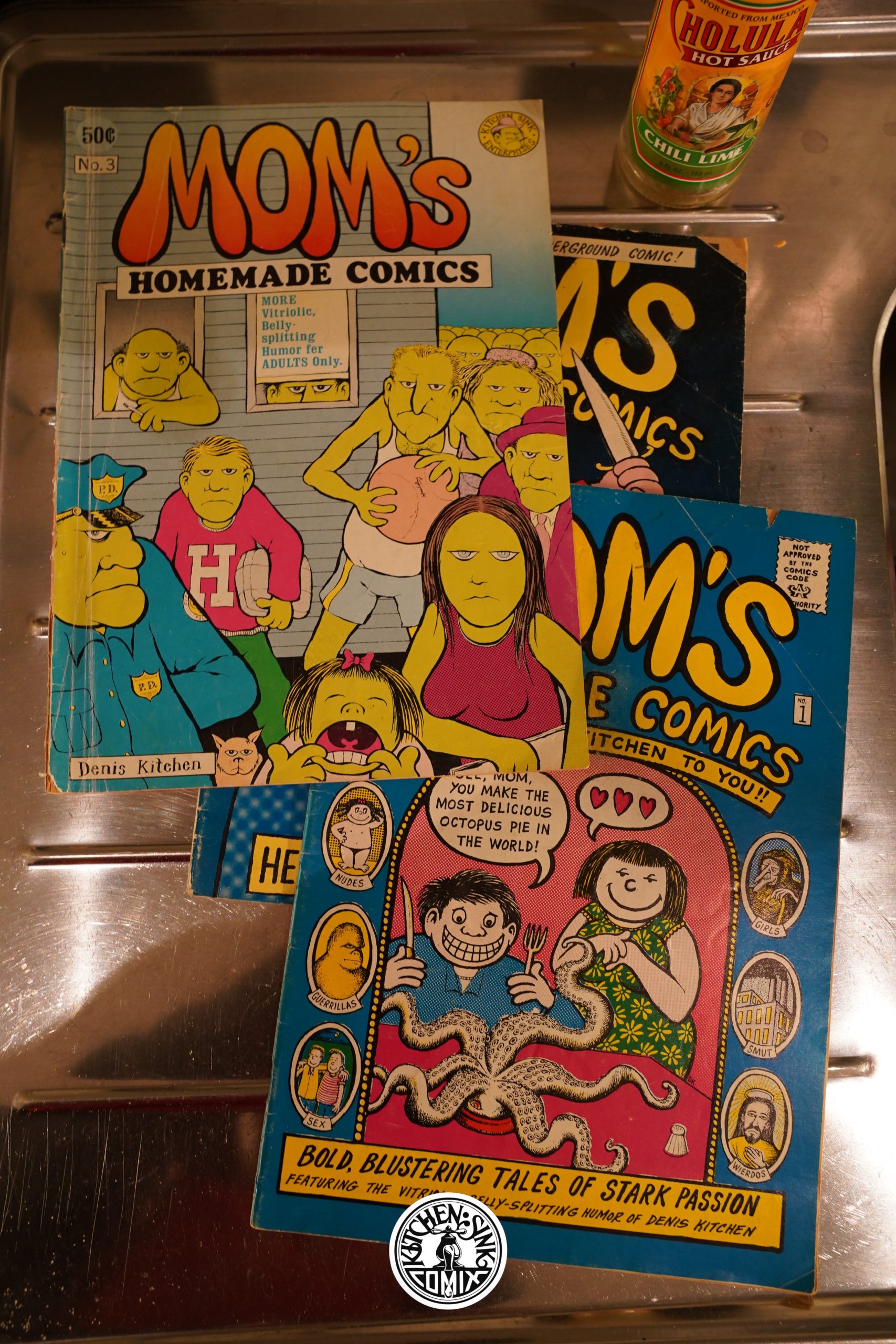 Kitchen was in his mid-20s when he was inspired by other early underground comics, like Bijou Funnies and Zap Comix, to self-publish his own book, and this was the start of the Kitchen Sink Enterprise empire.

Since this is the first comic published by Kitchen Sink, let’s read the entire first story in the first issue together: 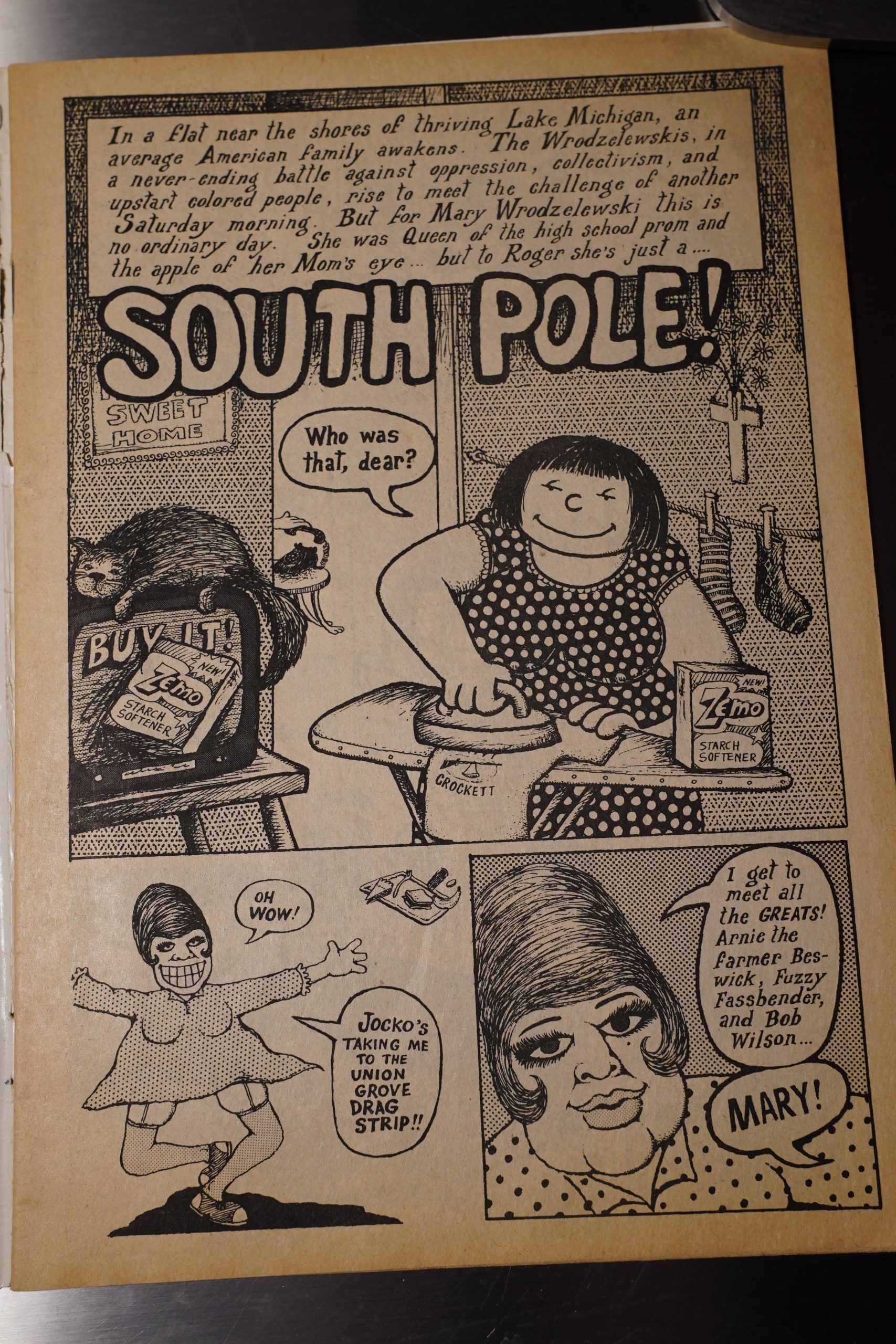 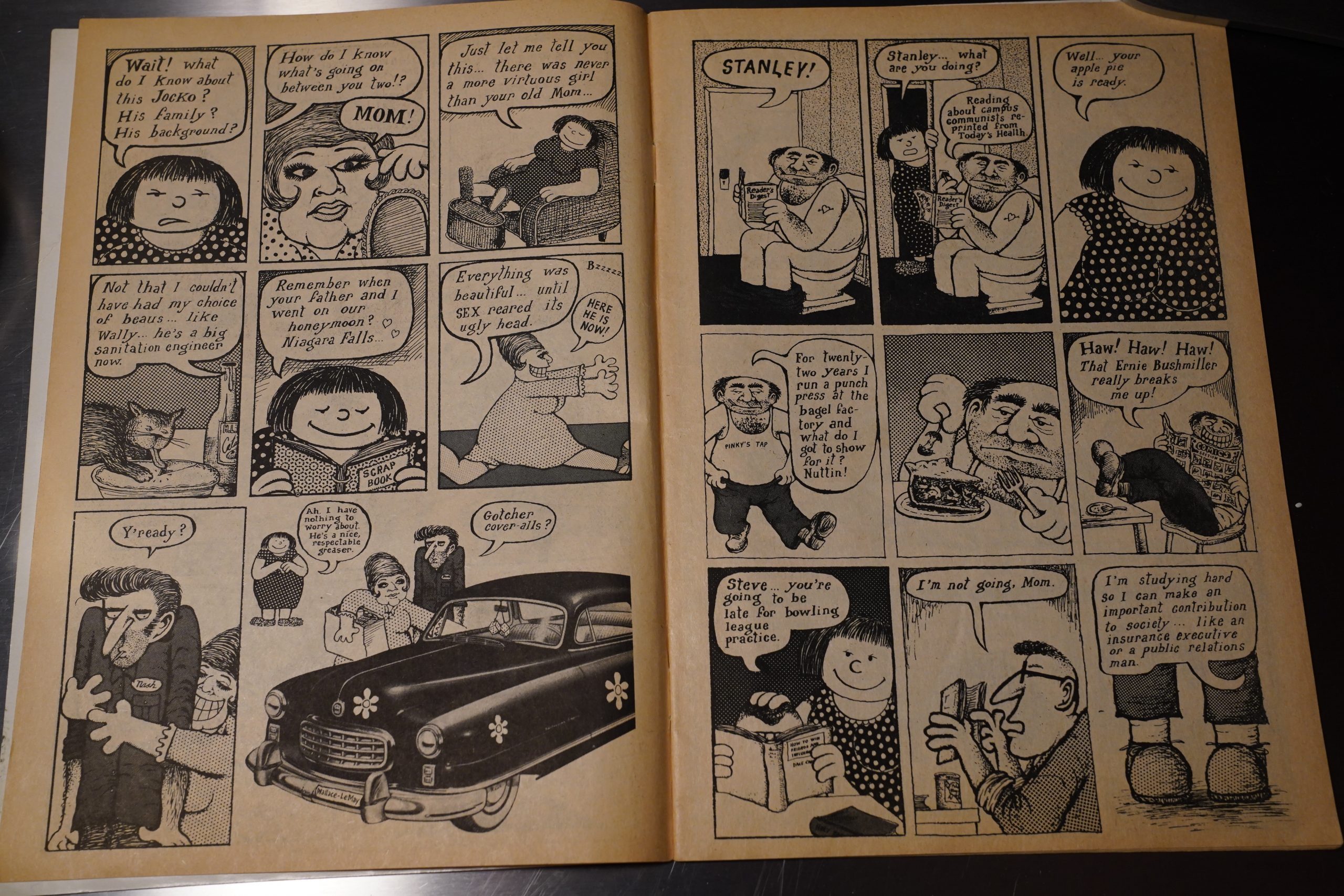 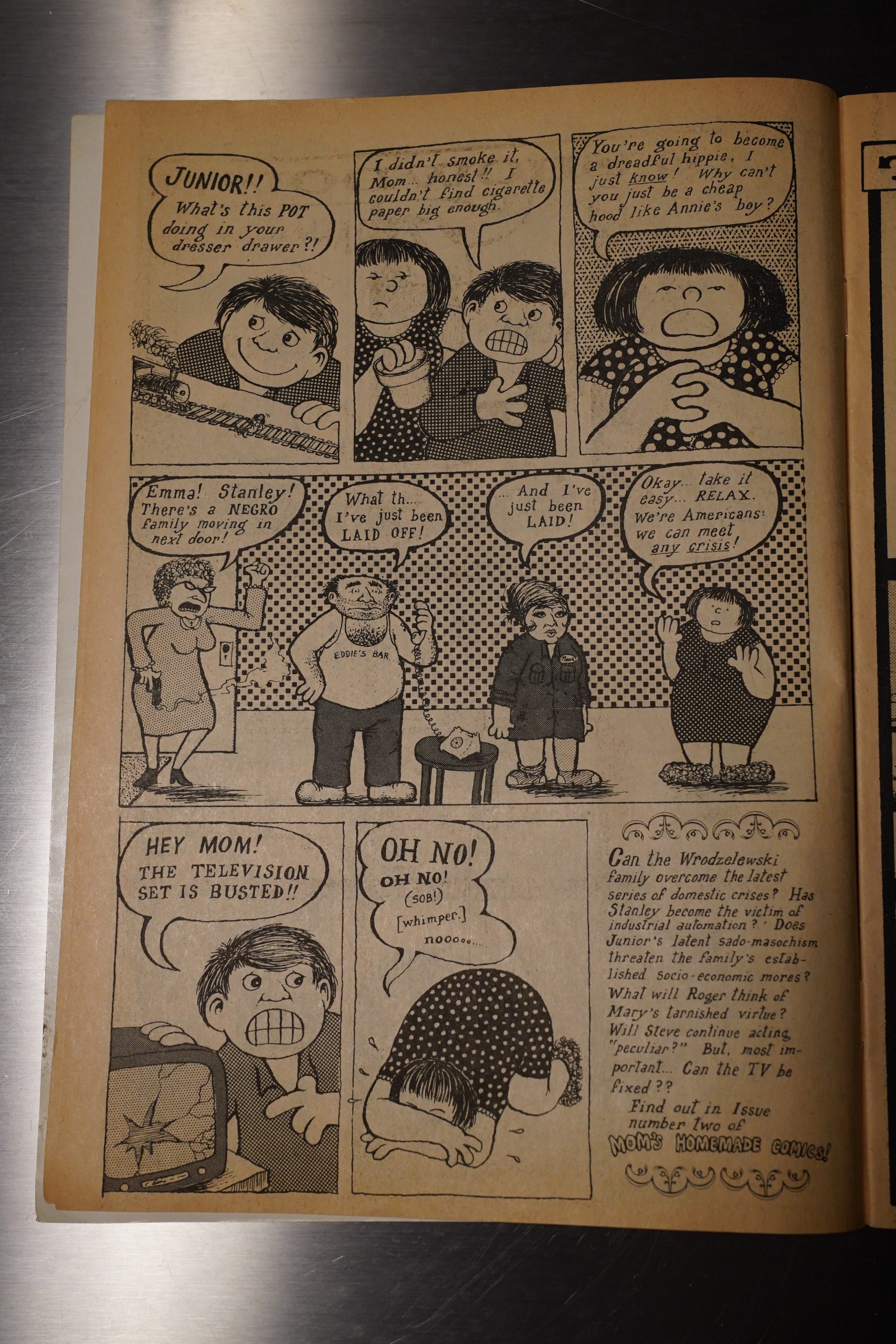 Yeah, OK, it’s not exactly the best thing ever in the history of comics. Kitchen would later develop a pretty meticulous and recognisable art style, but it’s not here yet. And even in this four page strip, he really seems to be casting about for something to write about, and settles on a sorta mild sit-com-ish take on how much those darn Americans like their TVs.

It’s not the most auspicious start ever, but on the other hand: It’s not that bad, either? 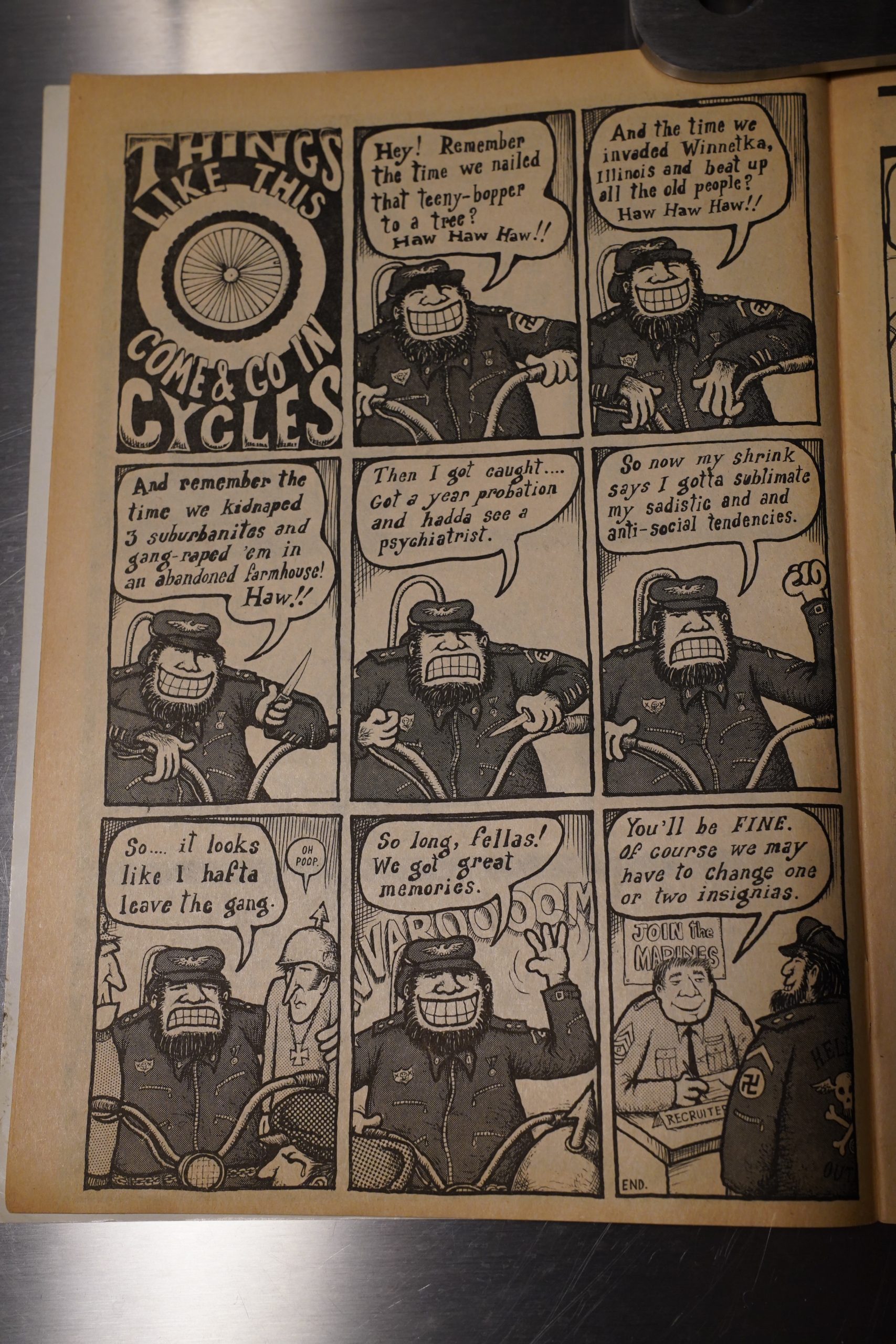 The rest of the first issue is mostly single page gags, and like the above, they’re mildly political: The cops and the military sucks, and drugs are cool. Which means that he’s totally right aaaaawn, but it’s more “that’s sure tellin’ ’em” than knee slappers. 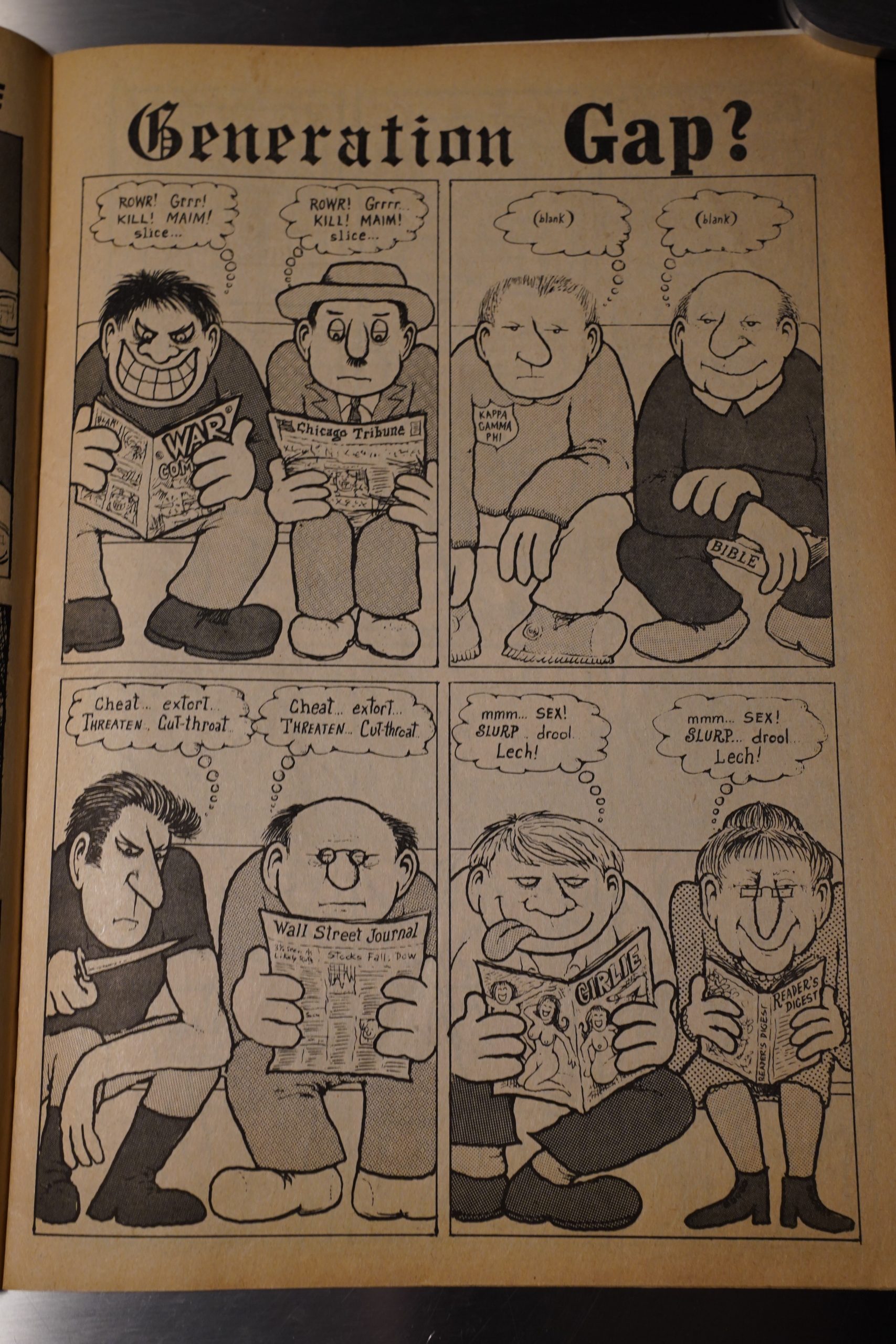 Many of the gags are straightforward pleas to the older generation to realise that kids these days are just the same as them. 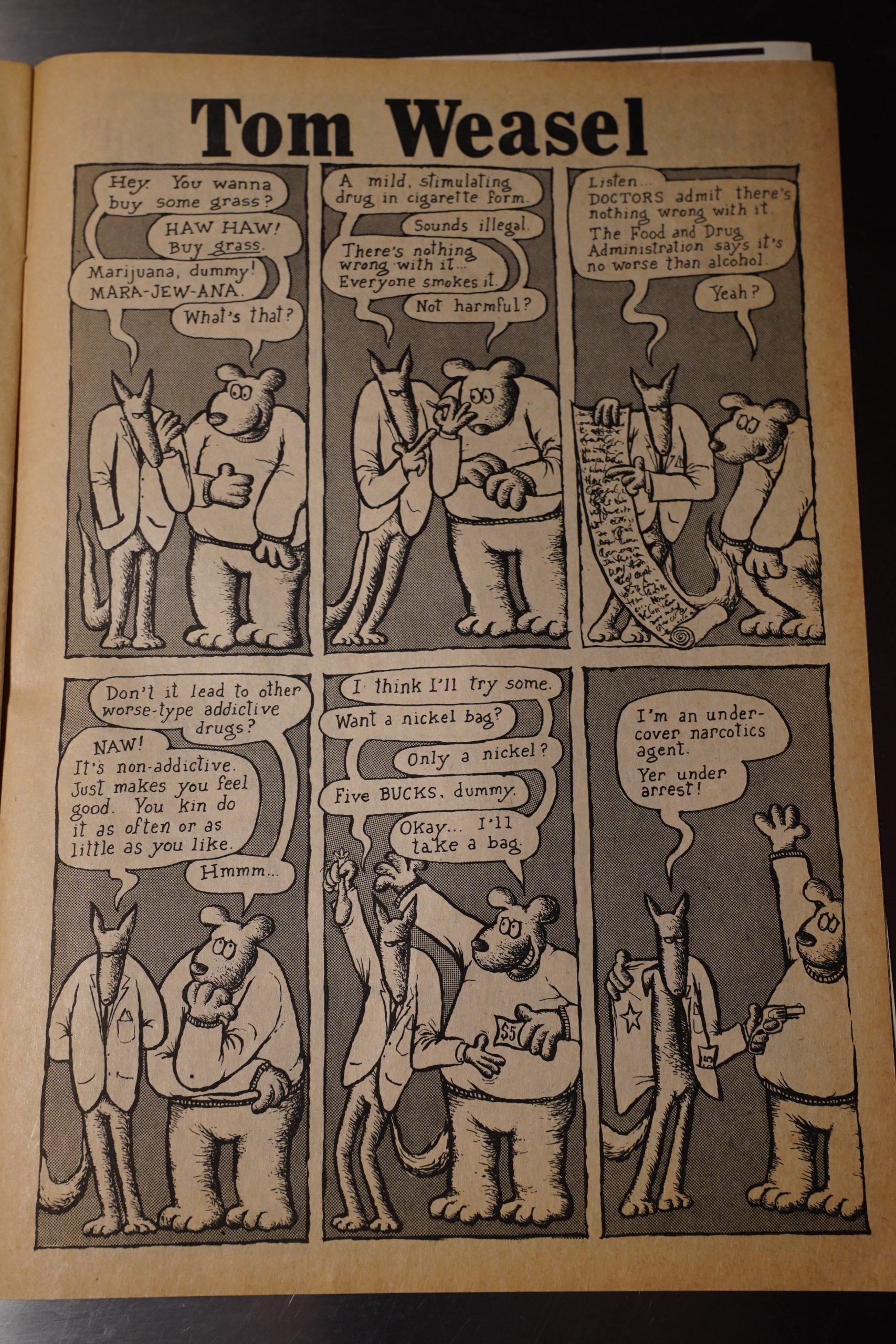 And… are all these strips really by Kitchen? The art’s all over the place, so I started wondering whether they’d been made by a group of people, but there’s no other name in the book than Kitchen’s, so… 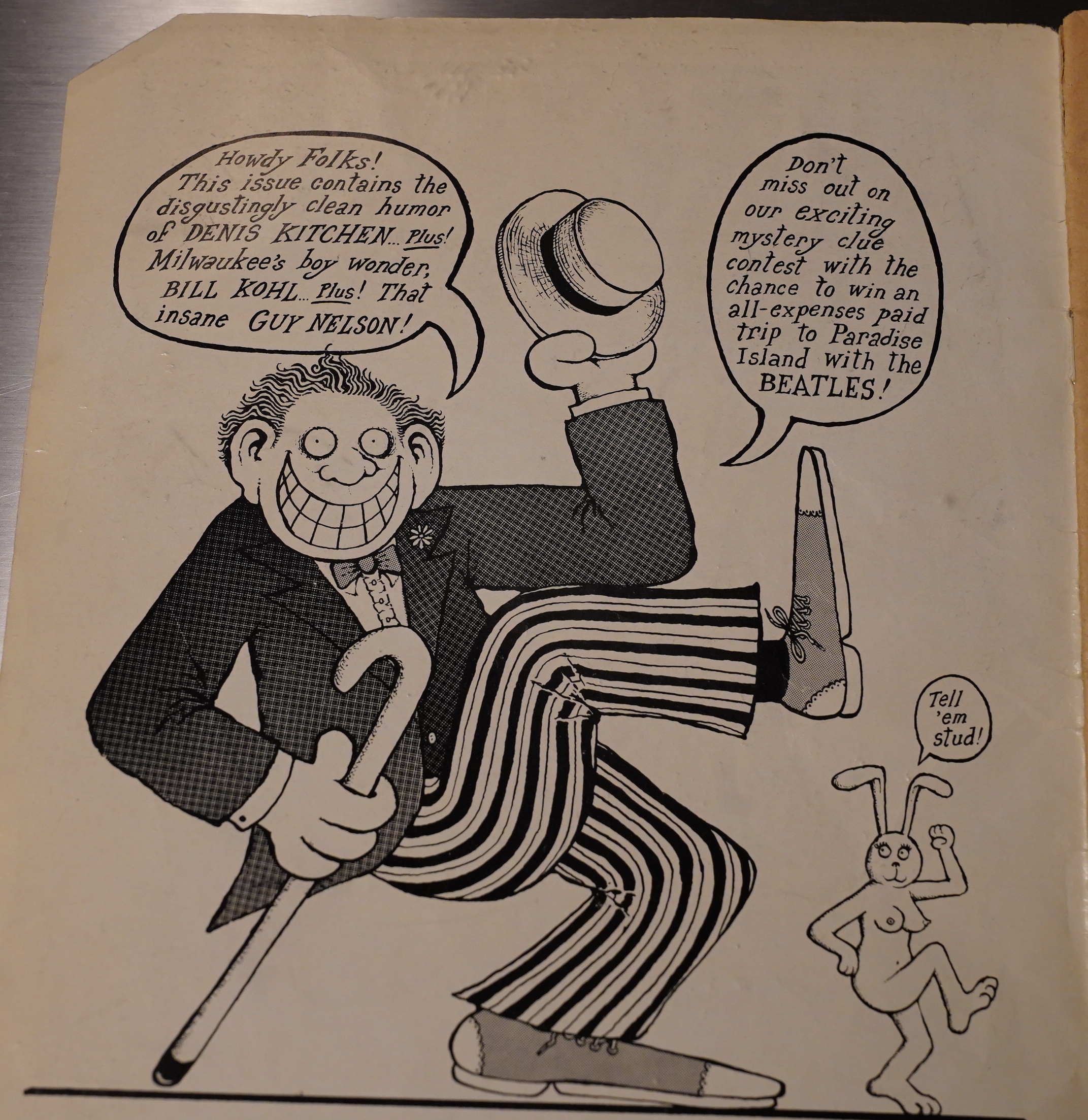 The front cover on the second issue promises sex and gore, but the inside insists that this is going to be a “clean” book. I’m not sure how Kitchen was trying to position this book on the general underground scene — it’s certainly not as out there as Zap, for instance. Is he trying to keep it family friendly? 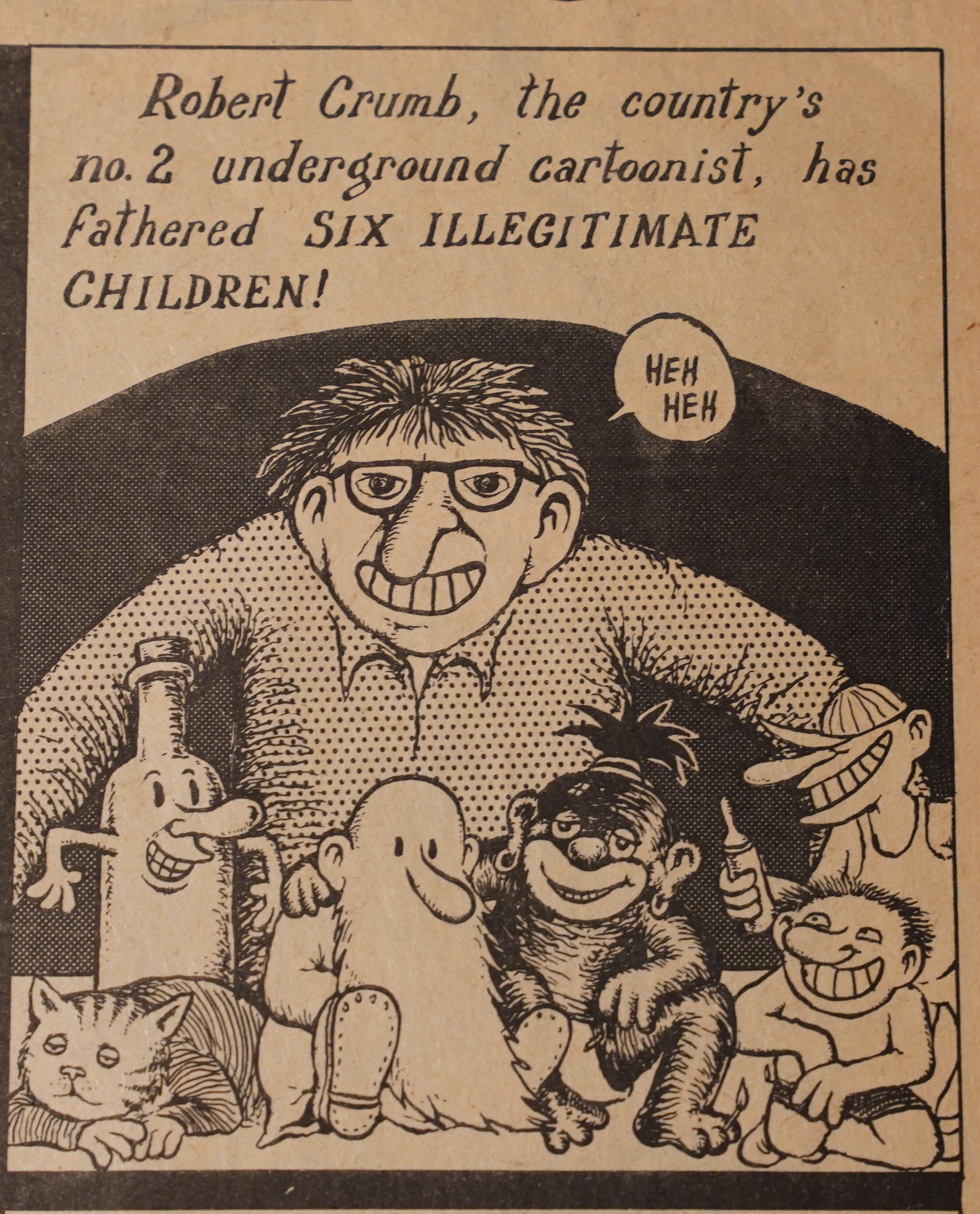 In the first two issues, Kitchen seems like he’s trying to get a friendly imaginary feud with R. Crumb going, calling him the “no. 2 cartoonist”, which is fun. 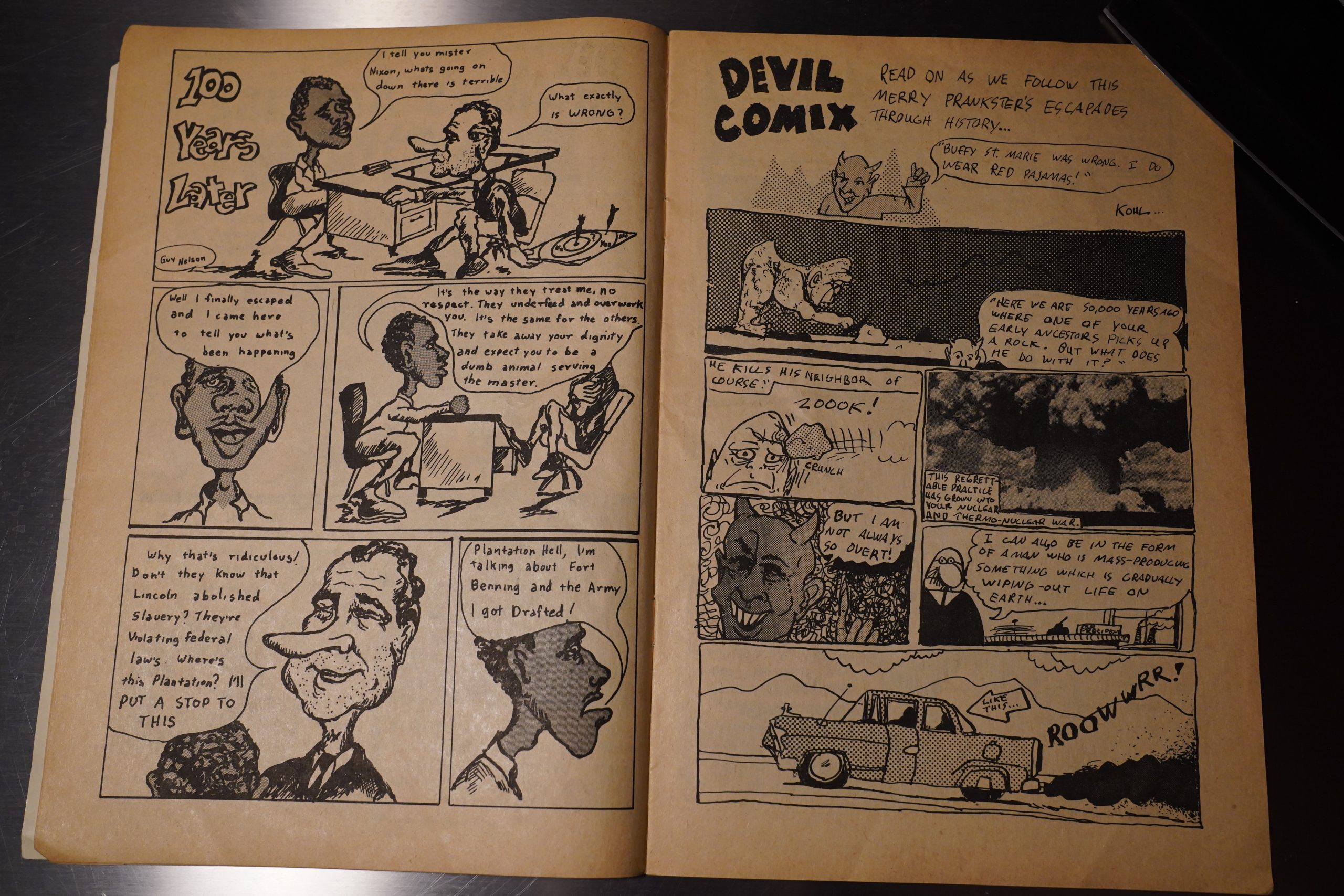 The second issue is apparently published by Print Mint? And we’ve now moved to an anthology format: About half the pages are by somebody else than Kitchen.

And it’s pretty rough stuff. Here we have Guy Nelson and Kohl, and … uhm… 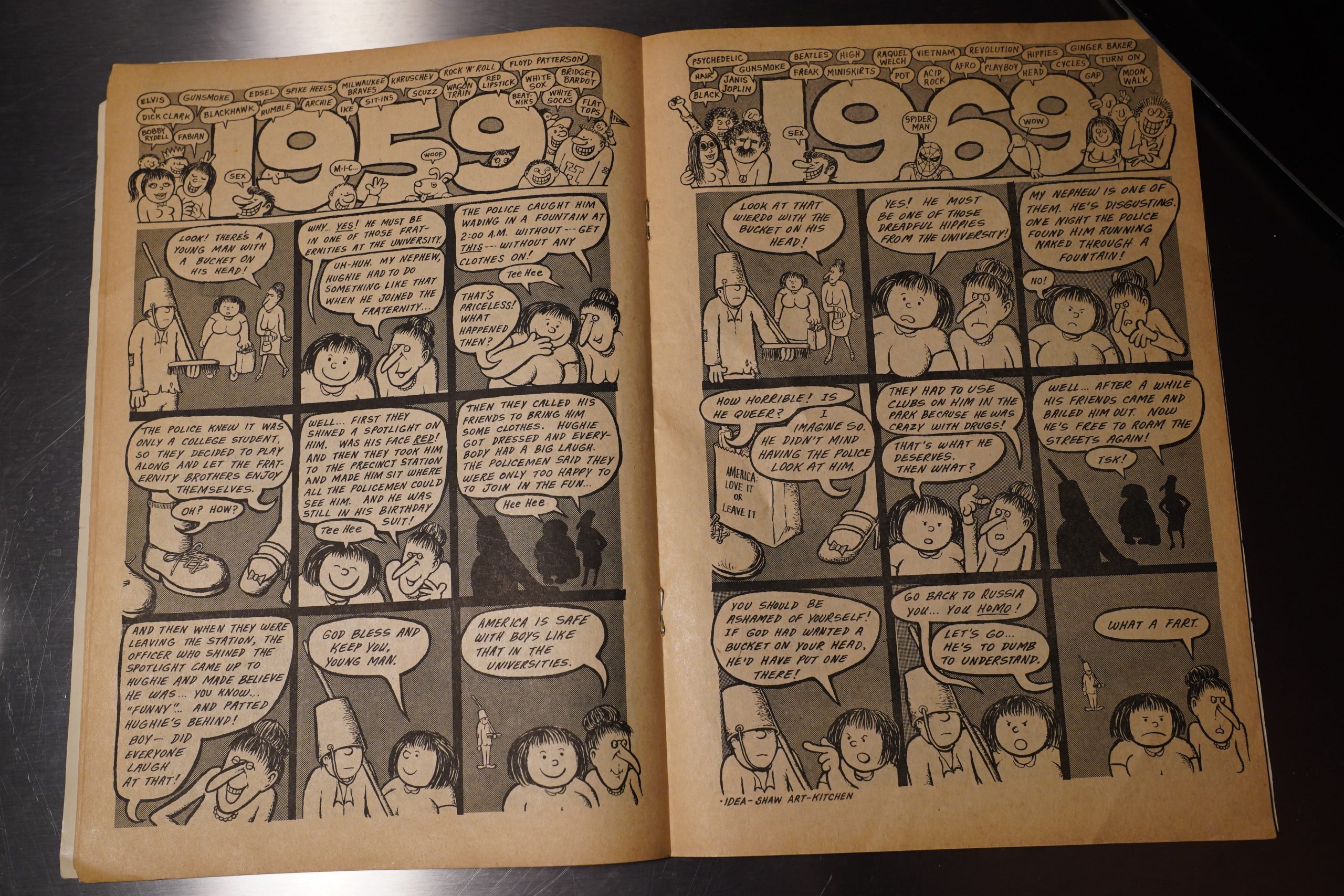 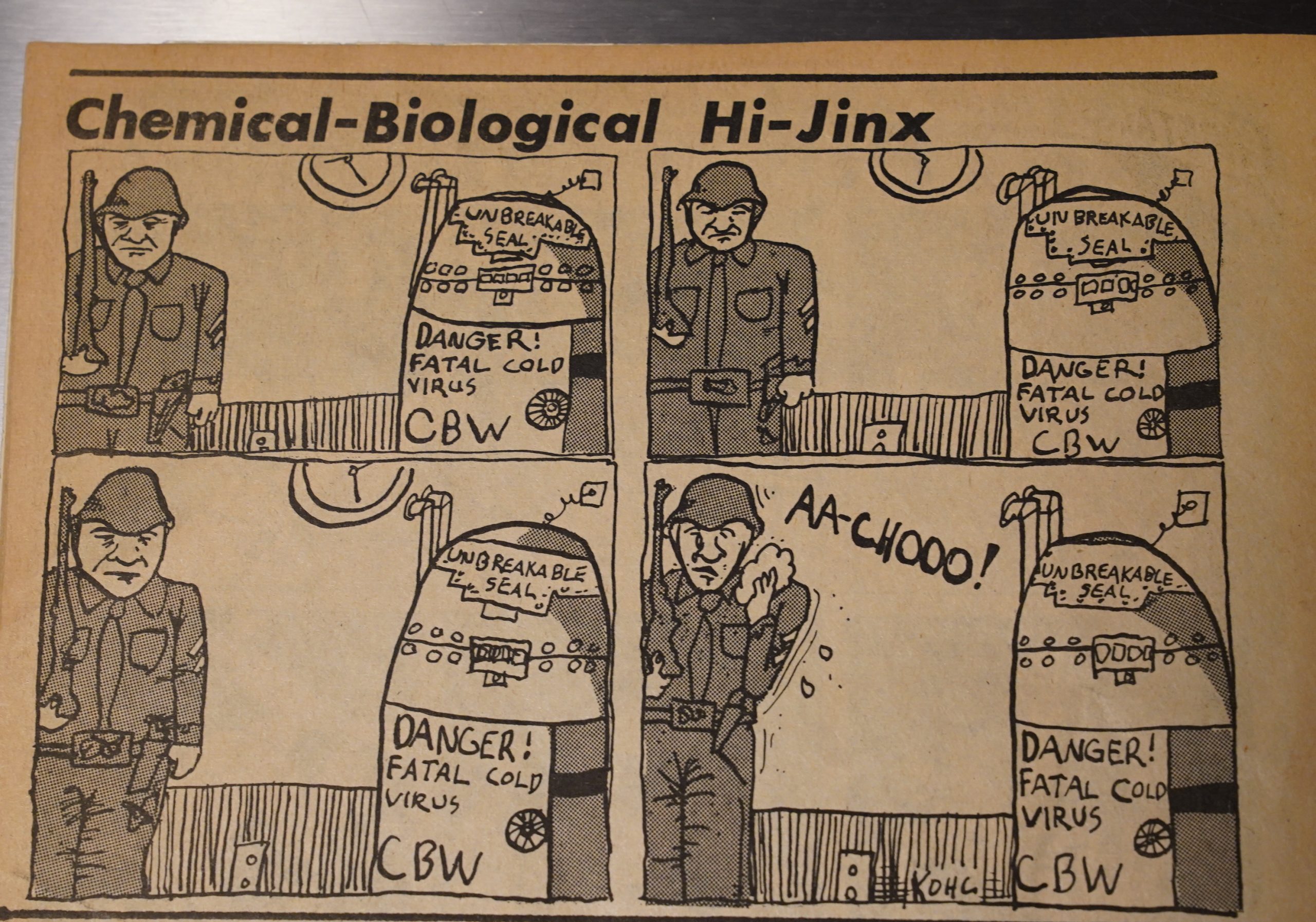 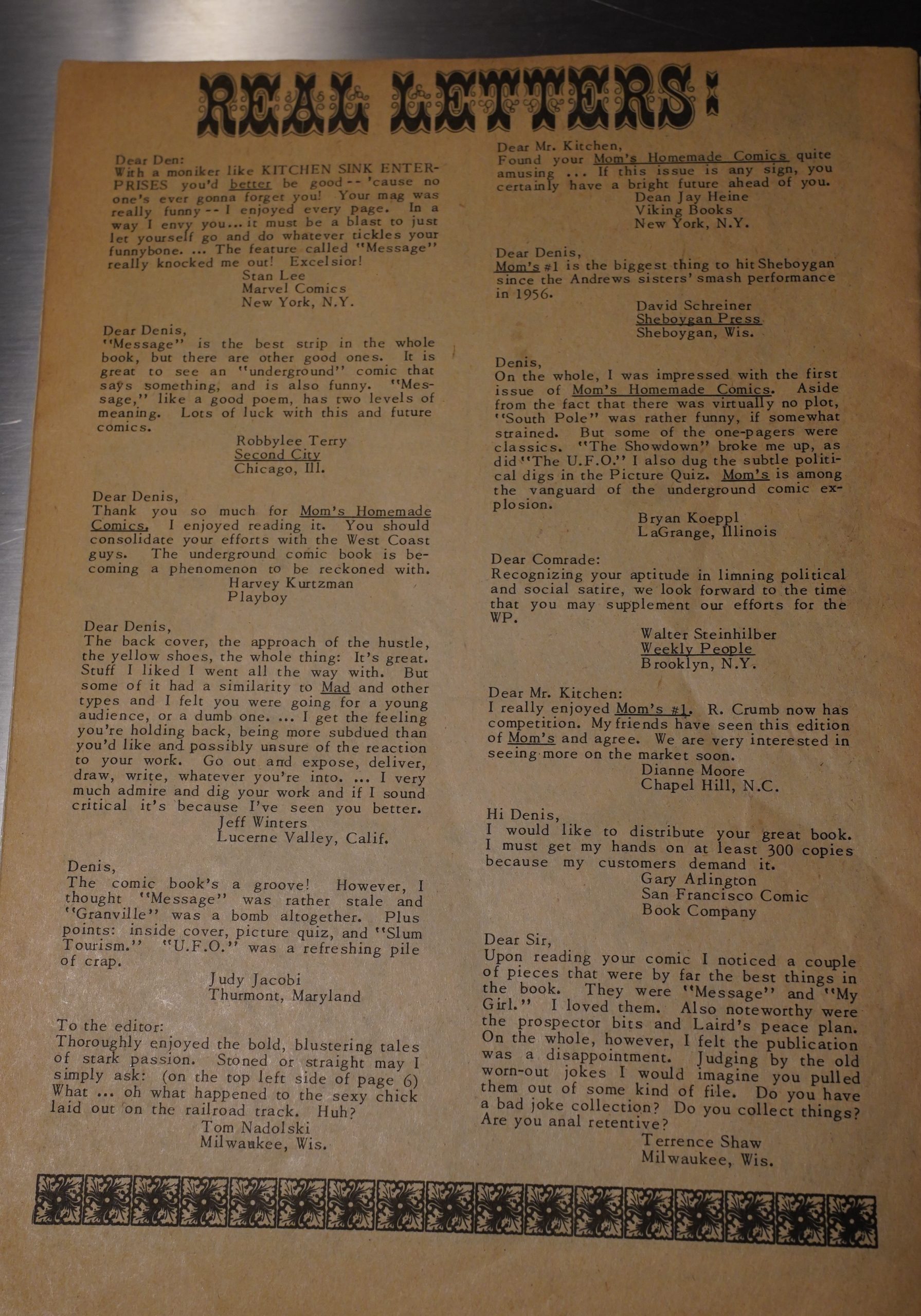 And they all quite liked The Message strip from the first issue, and that was indeed the best thing — it was a pretty funny and absurd little ditty. 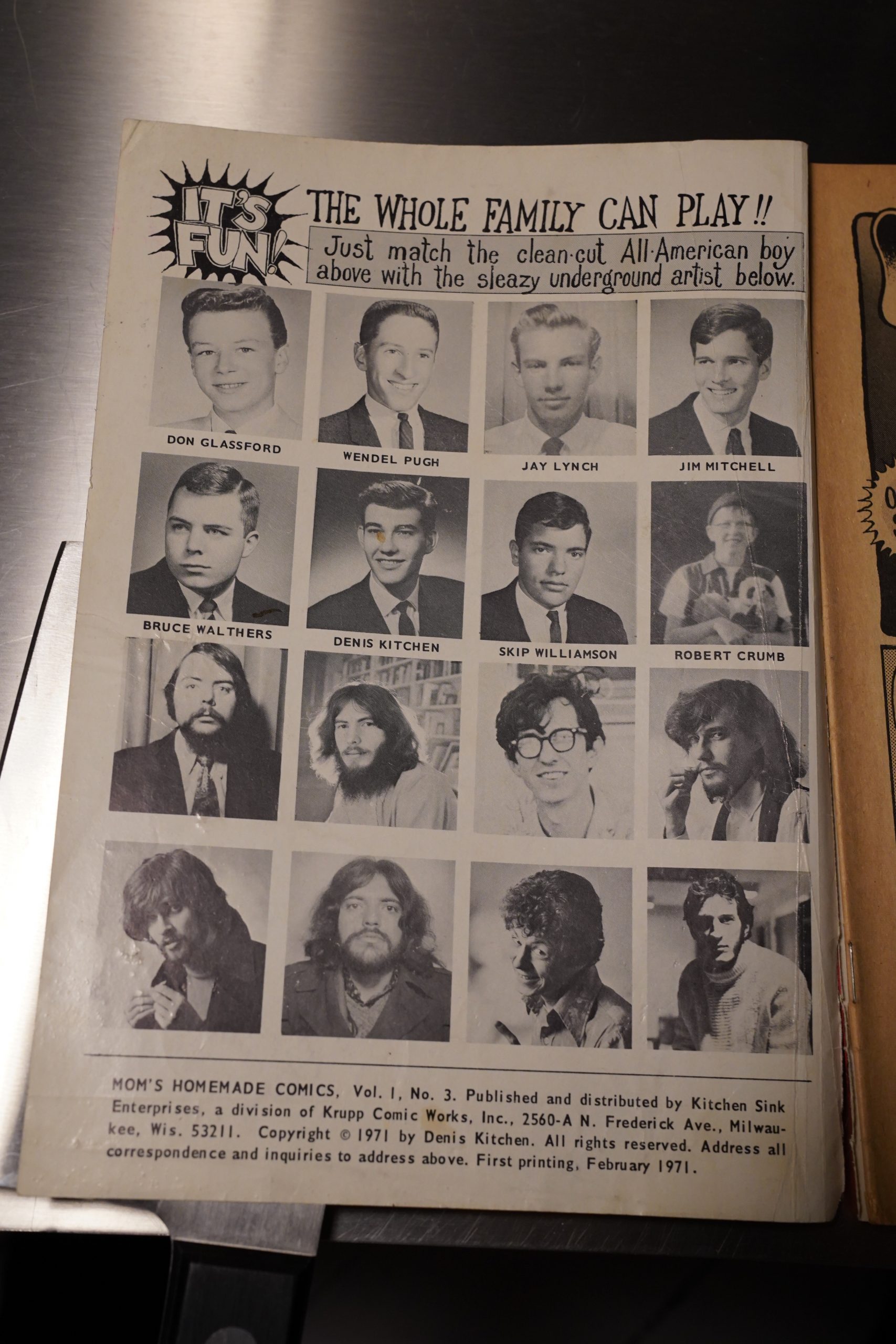 With the third issue, Kitchen has the book back again, and he’s upped the ambitions considerably — gone are the amateurish contributions, and all the pieces in the issue are from well-known underground artists. 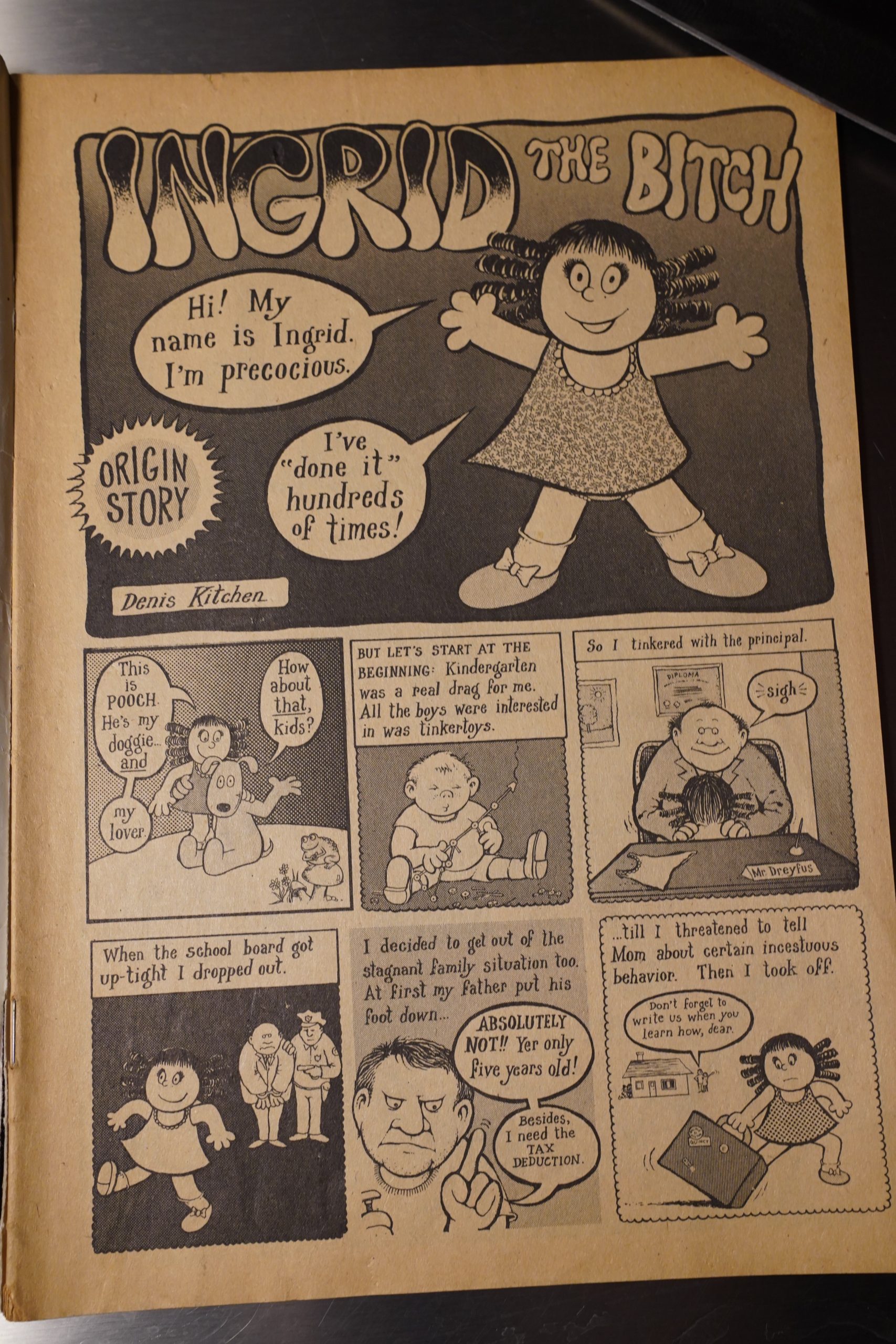 Kitchen’s artwork is now getting closer to his mature style, and he’s using zip-a-tone a lot more confidently. He’s also obviously decided that perhaps going for the shock factor is a more productive angle than the political approach. So the main story in the issue is about the sexual exploits of a five year old girl. 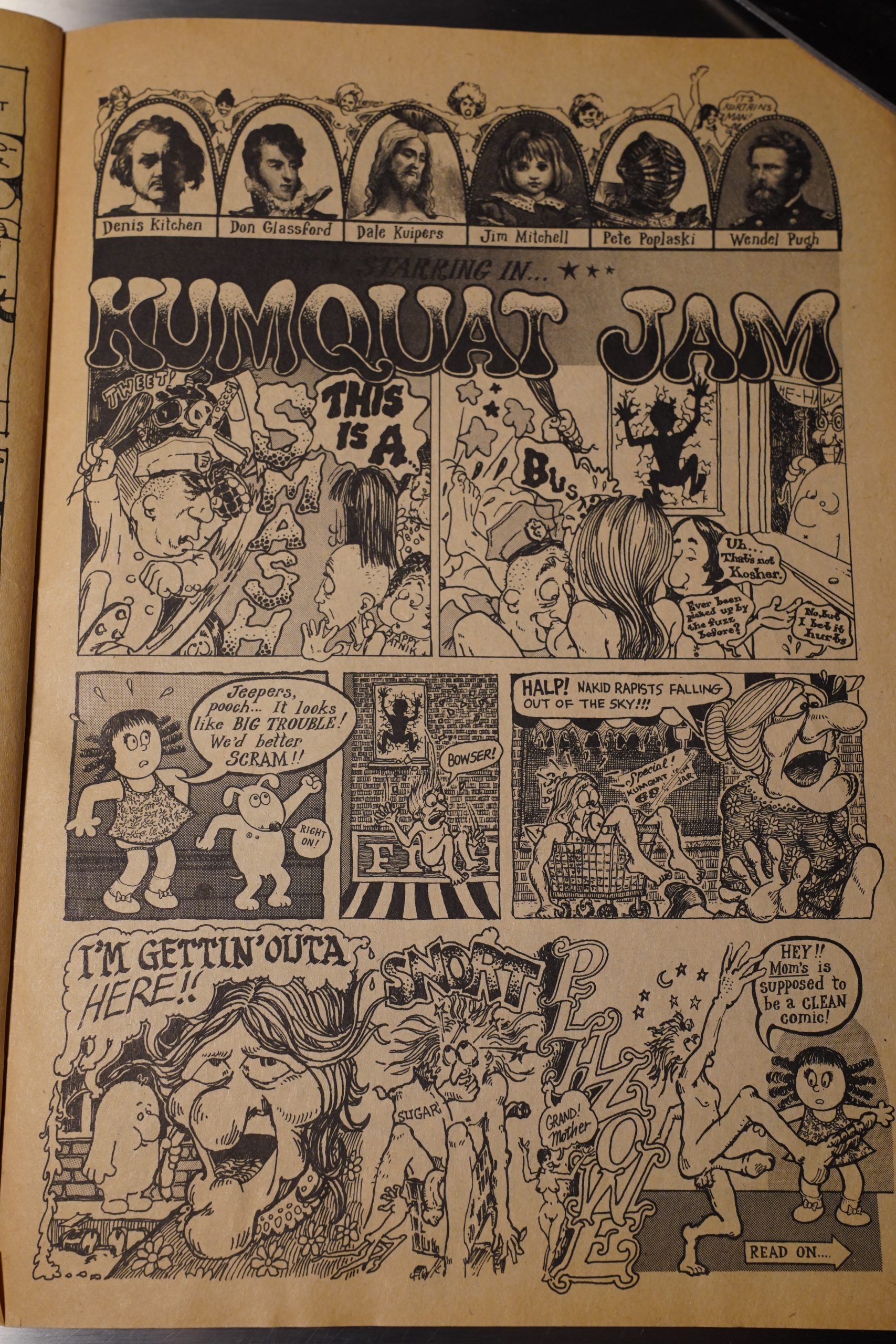 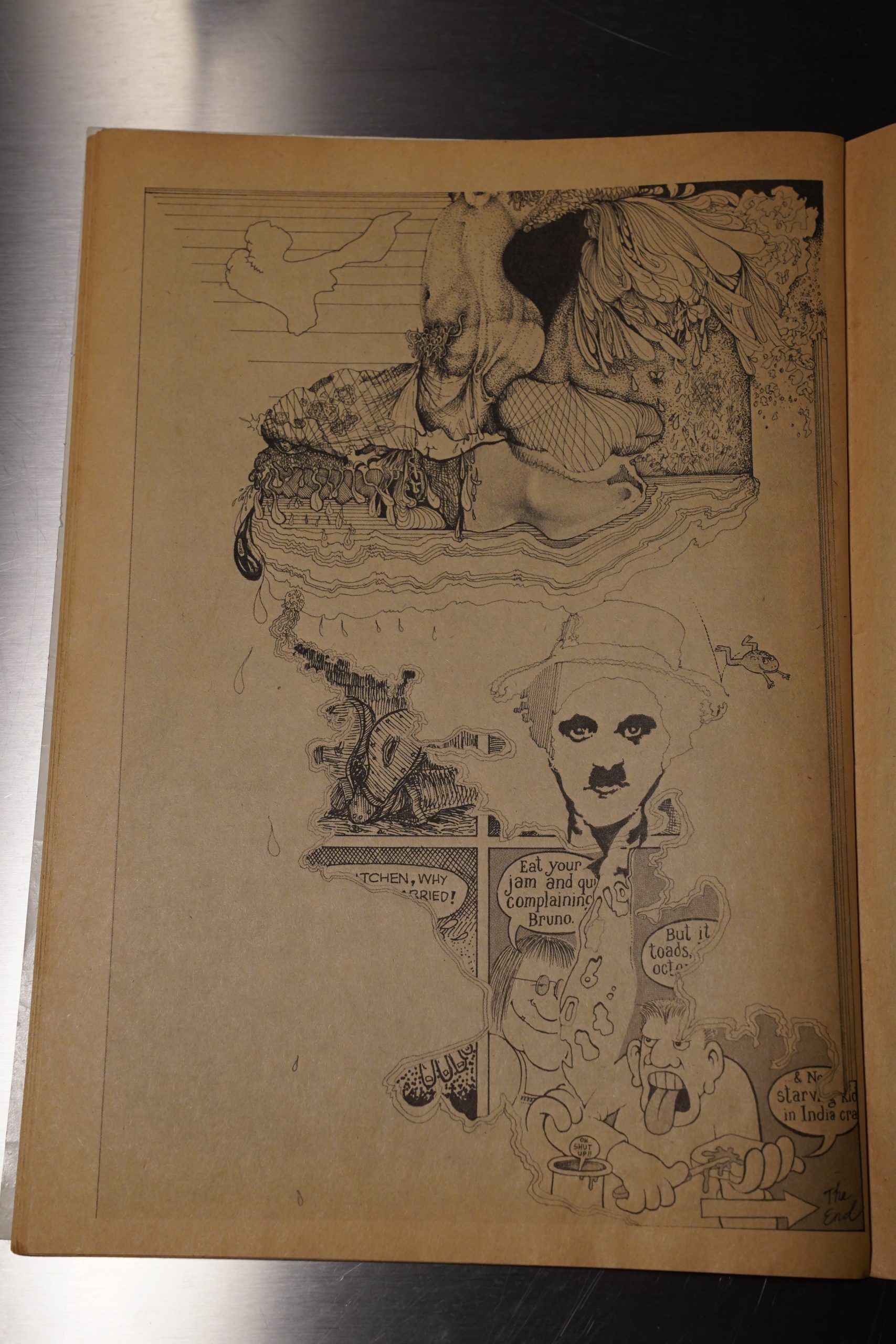 That ends with the most hippyish way possible. Look at that page. Just look at it! 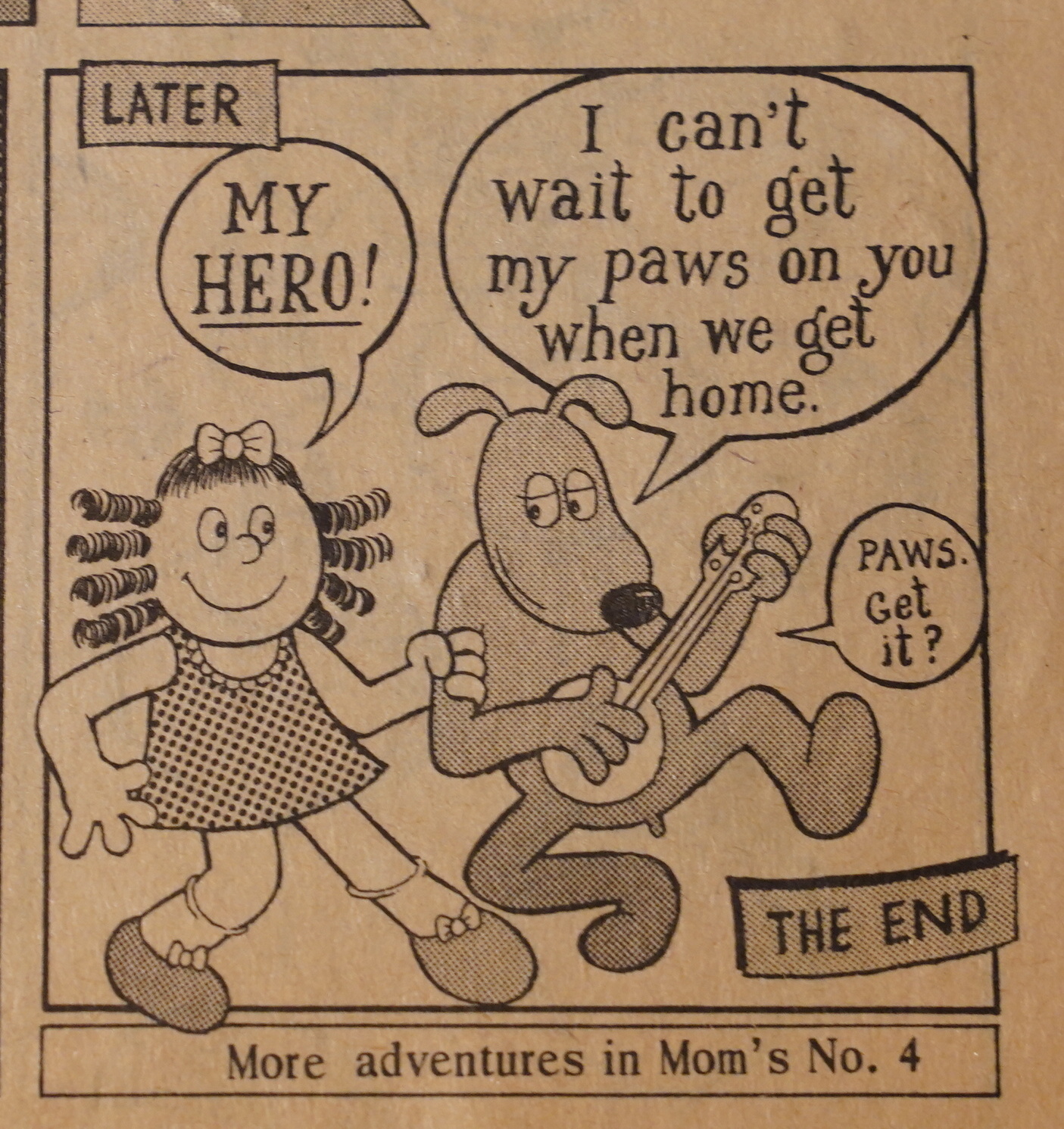 Kitchen apparently envisioned keeping the series running, but I’m guessing he just didn’t have time, as Kitchen Sink Comix (and the Krupps off-shoot) were getting pretty busy by now.

ROSENKRANZ: so Mom’s Homemade
Comics your comic book?
DENIS KITCHEN: Mom; was the first
comic book that I did, which I started in
the fall of 1968. I was never involved
With fanzines, although had seen a few
at that point. Mostly, was a loner in
Mihvaukee. I started an underground
newspaper of sorts when I was in
grade in 1960, called It continued
inro high school. I wrote, illustrated,
typed, and hawked it, the whole works.
When I attended the University Of
Wisconsin in Milwaukee, I worked on
the student newspaper, doing editorial
cartoons, illustrations and I started a reg-
ular strip called Sheepshead U. In my
junior year, I was art editor and contribu-
tor to Snide, a humor magazine that only
lasted one issue. When I got out Of col-
lege, I was drafted almost immediately,
served my three weeks, which is a story
in itself. Then I decided to become a
freelance cartoonist. It was a stru* at
the beginning but somehow I survived. I
freelanced for a lot of places in
Milwaukee. I did a poster for Schlitz,
posters and flyers for various rock groups
that came into town, stuff for the
Milwaukee Journal, ads for Various stores,
but my true love was comic books, and I
freelanced mostly to pay the rent. In late
’68, I Saw a copy Of Bijou Funnies
and said, “Wow, I could do that. ”
That’s how Mom; began. Bijou #1 was
the Only underground
comic I had ever seen
when I did Mom’s. I had
4000 books printed local-
l”. Then the Print Mint
saw a copy and offered to
publish and distribute it
nationally.
ROSENKRANZ: What exactly
is Krupp Comic Works?
KITCHEN: Krupp is incor-
porated. I’m the principal
stockholder and president,
so Krupp and I are pretty
much one and the same.
TO backtrack a bit
though, so you know how
Krupp began Print
Mint did a couple Of
printings of and
then they did Mom’s #2,
but I unas never satisfied
With the way were
happening. write a
rer to them and I’d never
get an answer. call to
find out when my book
would be ready or When
I’d get paid or how many
svere being printed. All I’d
ever get was a runaround
over the phone. I asked
for printer’s receipts Of
print runs When I got a
little suspicious and none
ever came. I just got very suspicious. I
had no evidence that they cheated me
really, but they made no attempt to be
upfront about their operation. I got sick
of having to rely on some outfit 2000
miles away that didn’t seem to give a fuck
about artists, and decided the only thing
to do was to start a company in the
Midwest. Rip Off was the only other real
publisher at the time and they seemed to
be very unstable. Since then, they’ve got-
ten very good. I’ve gotten to be very close
with Jaxon and the Rip Off guys. But
anyway, at the time, there were no other
alternatives.
My roommate Gene Gessert invested
some money and we formed a partner-
ship, which we called Kumquat
Productions. Kumquat published
Shangrila and Quagmire and folded.
then approached several other Milwaukee
cartoonists about starting another com-
pany, which I envisioned as an artists
cooperative, which in retrospect, was a
pretty naive thing (o do. I approached
Jim Mitchell, and Don Glassford, and
Bruce Walthers, and Wendel Pugh, who
were all interested. The idea Of an artists
cooperative just didn’t work. There were
too many generals, if you know what I
mean. Krupp is finally beginning to run
On the efficient basis it needs to, in order
to Stay alive.
ROSENKRANZ: did you get the rights to
print Mom’s Homemade Comics and
Bijou Funnies back from Mint?
KITCHEN: Actually, publishing companies,
at least in the underground, do not own a
title. The copyright holder does. took
Mom; aveay from the Print Mint, obvious-
Iy, and Jay and Skip took Bijou away from
them. We can reprint the Old Mom’s any
time we want — Print Mint has absolute-
Iy no control over that any more. We’re in
the process of reprinting the old Bijous.
We’ve already done our own edition Of
Bijou #4 and will soon be doing #3.

Another interview in The Comics Journal #63, page 213:

BILL SHERMAN : Let’s start with some history—that’s
what my notes say. How did Krupp Comics come about?
DENIS KITCHEN: I was in college, in Milwaukee. I
got drafted right Out Of college. I’d always had aspira-
tions to be a cartoonist, but I don’t think I was
terribly serious about it until was drafted and 22
days later became a civilian—but that’s a different
story—and decided I did want to be a cartoonist after
I was browsing in a bookstore in Milwaukee and saw a
copy of Bijou #1, and I remember thinking to myself that
that was the sort of thing I would like to create. I
bought a copy and took it back to my hovel. My roommate
said he would vigorously promote the book if I would
draw my own. So we formed a brief partnership and
that’s how Mom’s was created. It was strictly for local
consumption, and in fact had a lot of Milwaukee jokes.
To my astonishment 4, 000 copies sold very quickly in
Milwaukee. In fact, Bill, the roommate, went to San
Francisco with a box in his trunk, dropped them off at
Gary Arlington’s San Francisco Comic Book Store and
within a week the box had sold. Gary wrote me, asking
for more. But I was running out of copies. And then The
Print Mint, which at the time was the only viable under-
ground publisher, offered to be my publisher and I was
delighted. I was beginning to think that maybe I could
actually make my living at this. At this time, of course ,
there were tens of thousands of “hippies” looking for
their “own” literature and this was a mushrooming
phenomenon.
To make the long story short, I was unhappy with The
Plült Mint for a variety Of reasons, and I decided to
publish books myself. Based on my brief experience in
Milwaukee, I thought I knew ‘tall about” publishing,
which was terribly naive. With the help of another friend,
I started Kumquat productions. That didn’t last very
long at all, publishing only two comics. It reorganized
into Krupp Comic Works in September of 1970. I had a
certain knack for business even then but was very
naive. I was very lucky that there was a great demand
for underground comix; that there was a subculture and
a network of head shops literally begging for books.
Other cartoonists offered me their books. They said,
“Here, you print them and distribute them and pay us a
royalty,” and I said, “Well. okay,” and became a
publisher by default. I had no intention Of ever being
a publisher.
SHERMAN : The first issue of Mom’s was all your work.
KITCHEN : It’s the only solo book I ever did. (laugh-
ter)
SHERMAN : What happened? Why was the next issue not
all Denis Kitchen ?
KITCHEN; Because already I didn’t have time to draw
it all myself and I didn’t show a great deal of taste in
choosing contributors for the second issue. It was put
together hastily and my contributions kept shrinking.
To this day I’m probably the least prolific cartoonist I
publish, but I still like to draw. I do have a page here
and there in various books. But publishing takes at least
of my time.
SHERMAN: How fast are you as an artist?
KITCHEN: When I’m just drawing, probably half a page
a day at best. I consider that a good rate. But it’s hard to
find full days. To take two days to draw a page is a real
luxury to me now. Usually the only time I turn out work
is when I have a deadline imposed from outside because I
don’t take my own deadlines seriously. Time after time I
have books with myself on the chart and I end up crossing
my name out and substituting someone else because can’t
produce in time.

This is the first post in the Entire Kitchen Sink blog series.