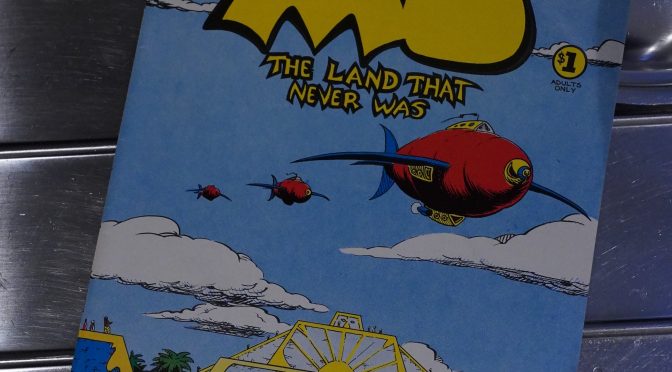 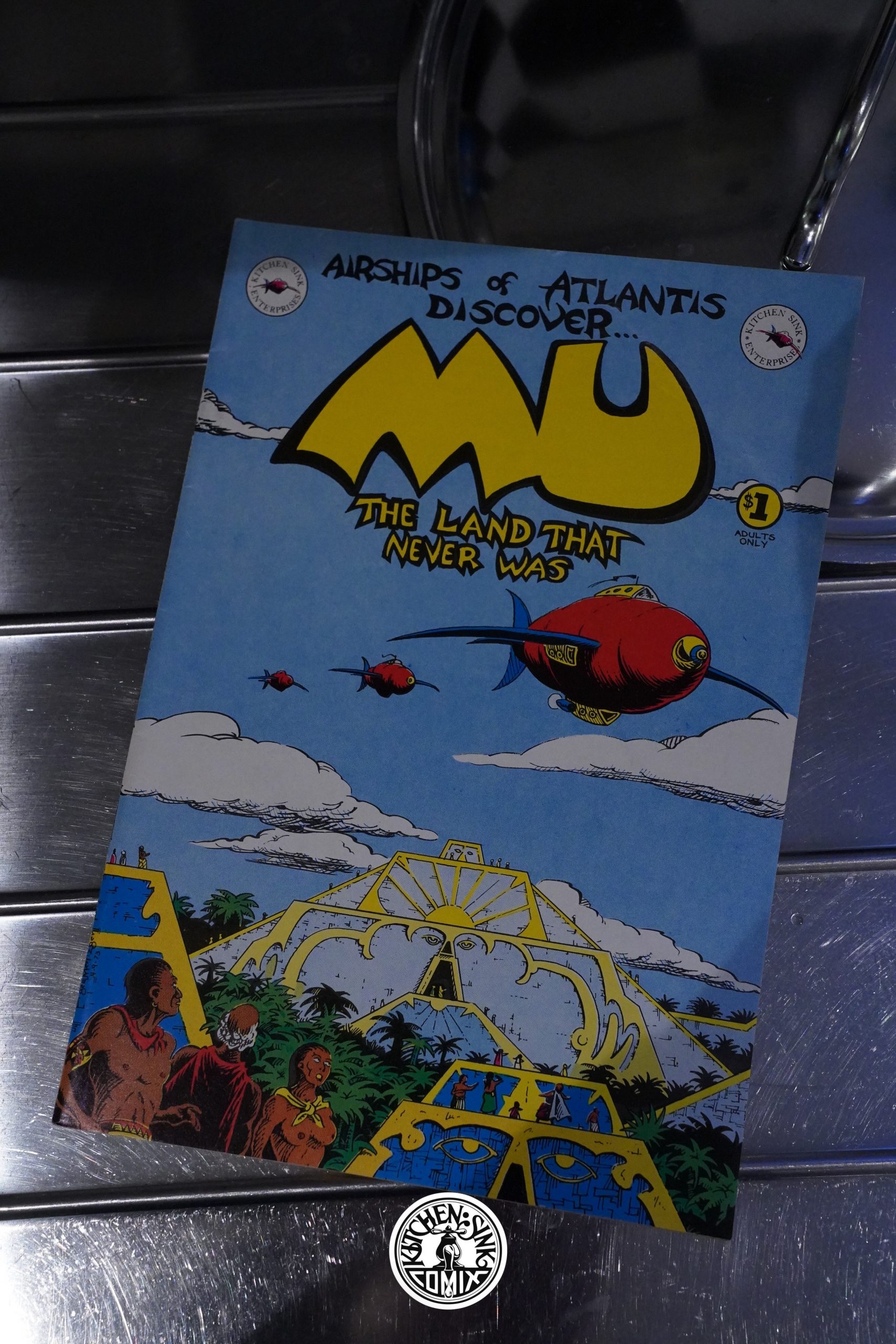 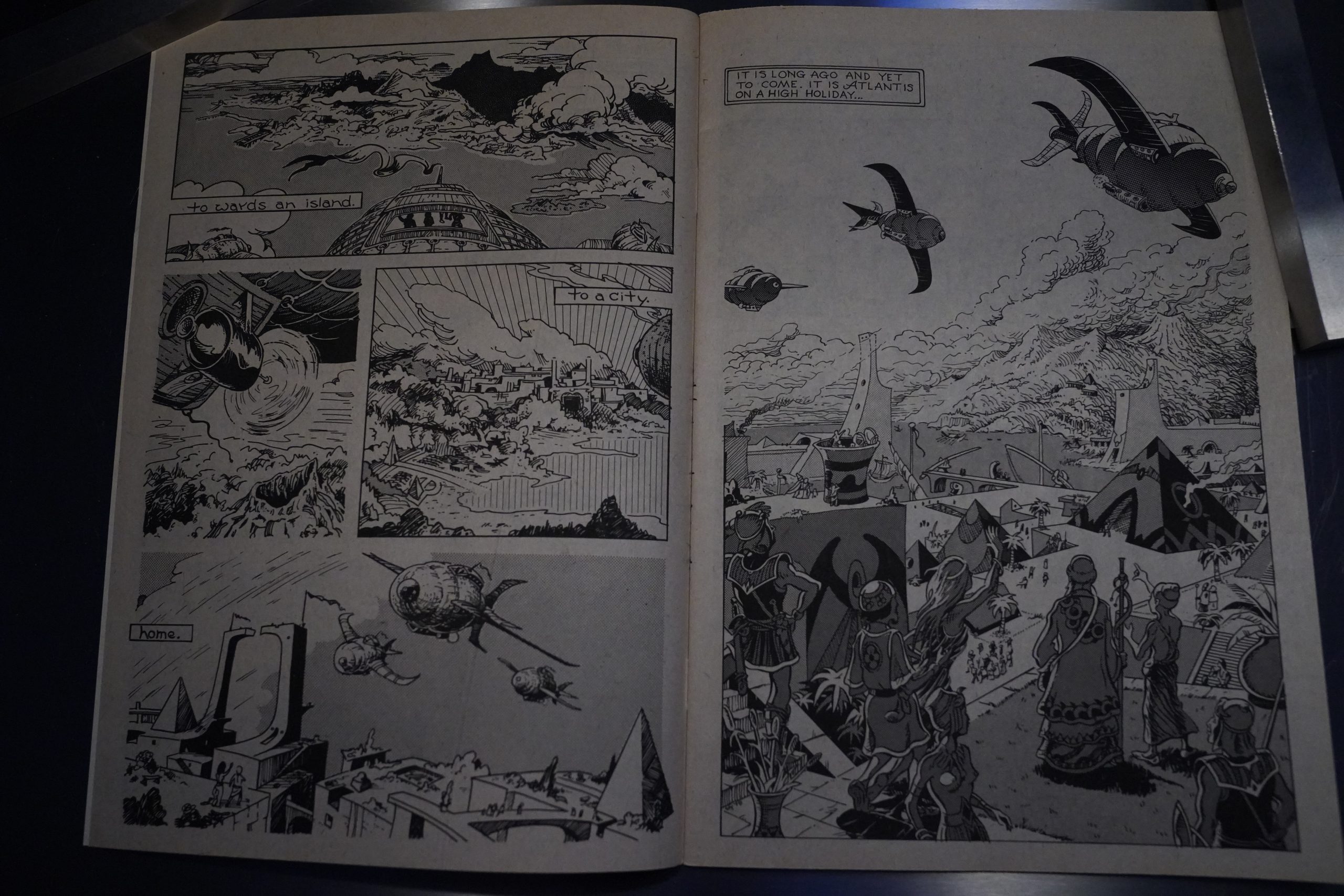 Huh, this looks like such a throwback to earlier Underground times… because it is. This is yet another Kitchen Sink edition of an earlier work — this seems to have been made in 1973, but I’m unable to determine whether it was ever published at that time? 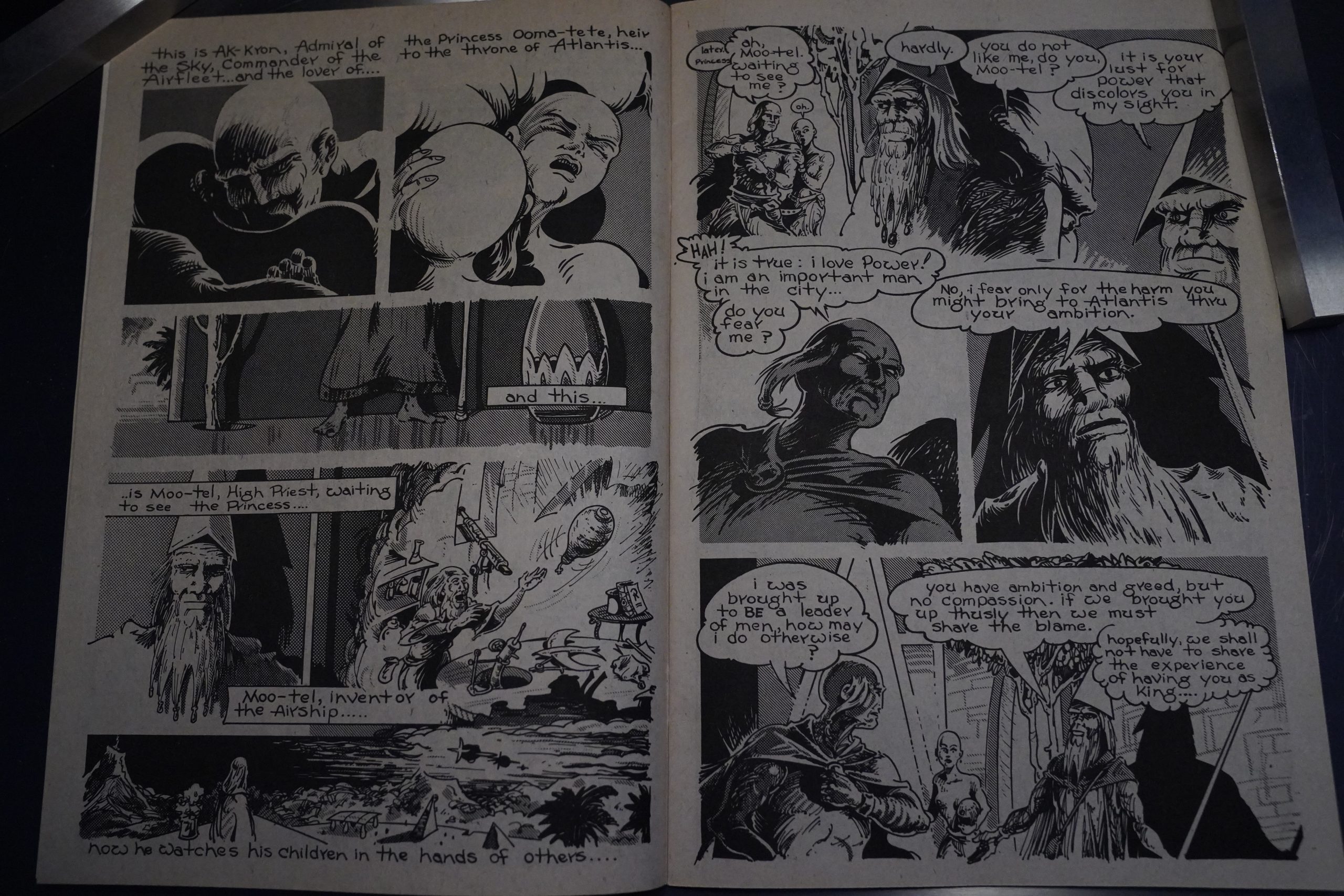 In any case, this is a serious enough effort: It’s about a guy going from Atlantis to Mu, and, as one does, tries to conquer Mu.

The figures are pretty basic, but some of the landscapes are nice, and the story has a kinda fun twist. 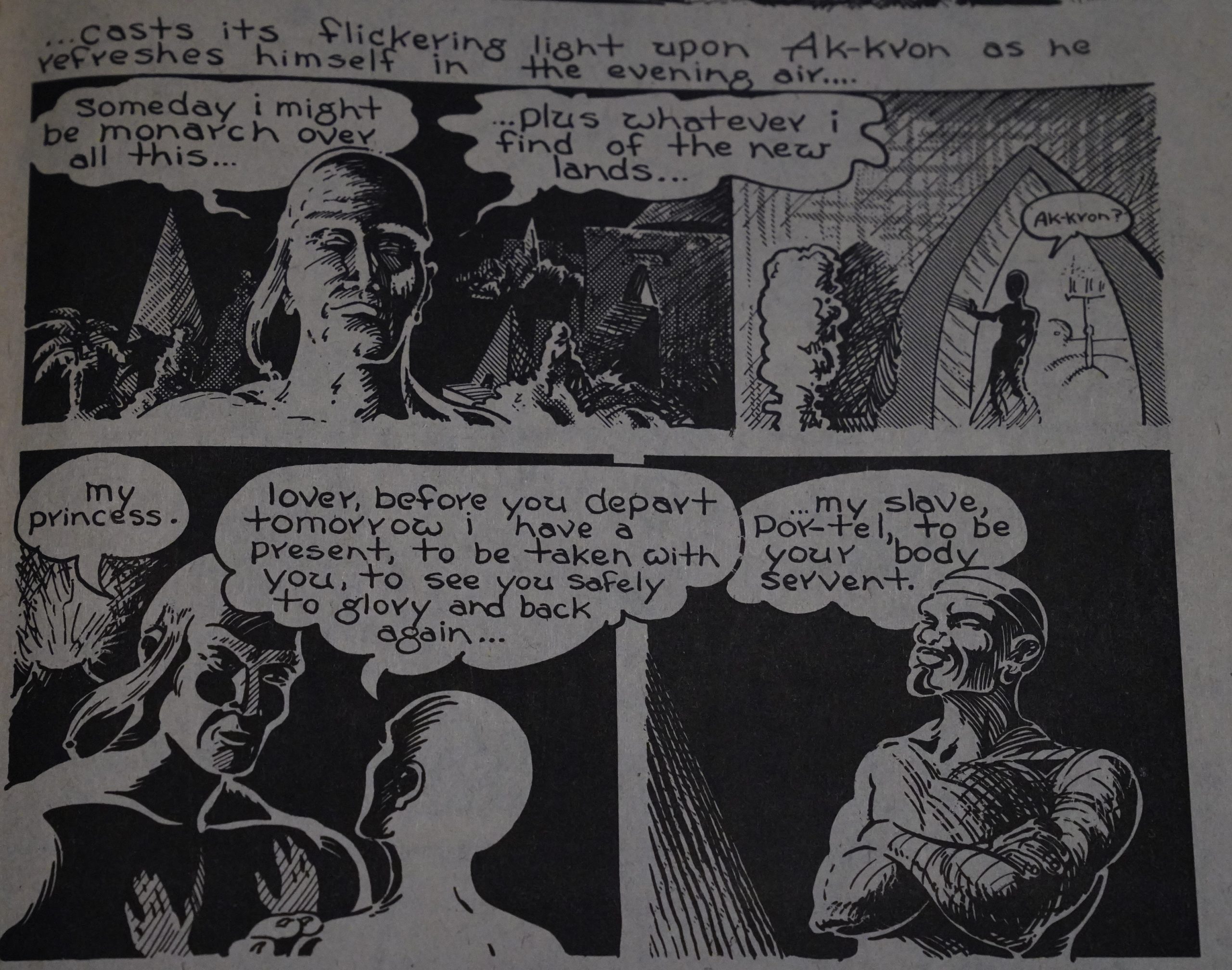 Unfortunately, the one-sided ear mullet never took off as a hair style. 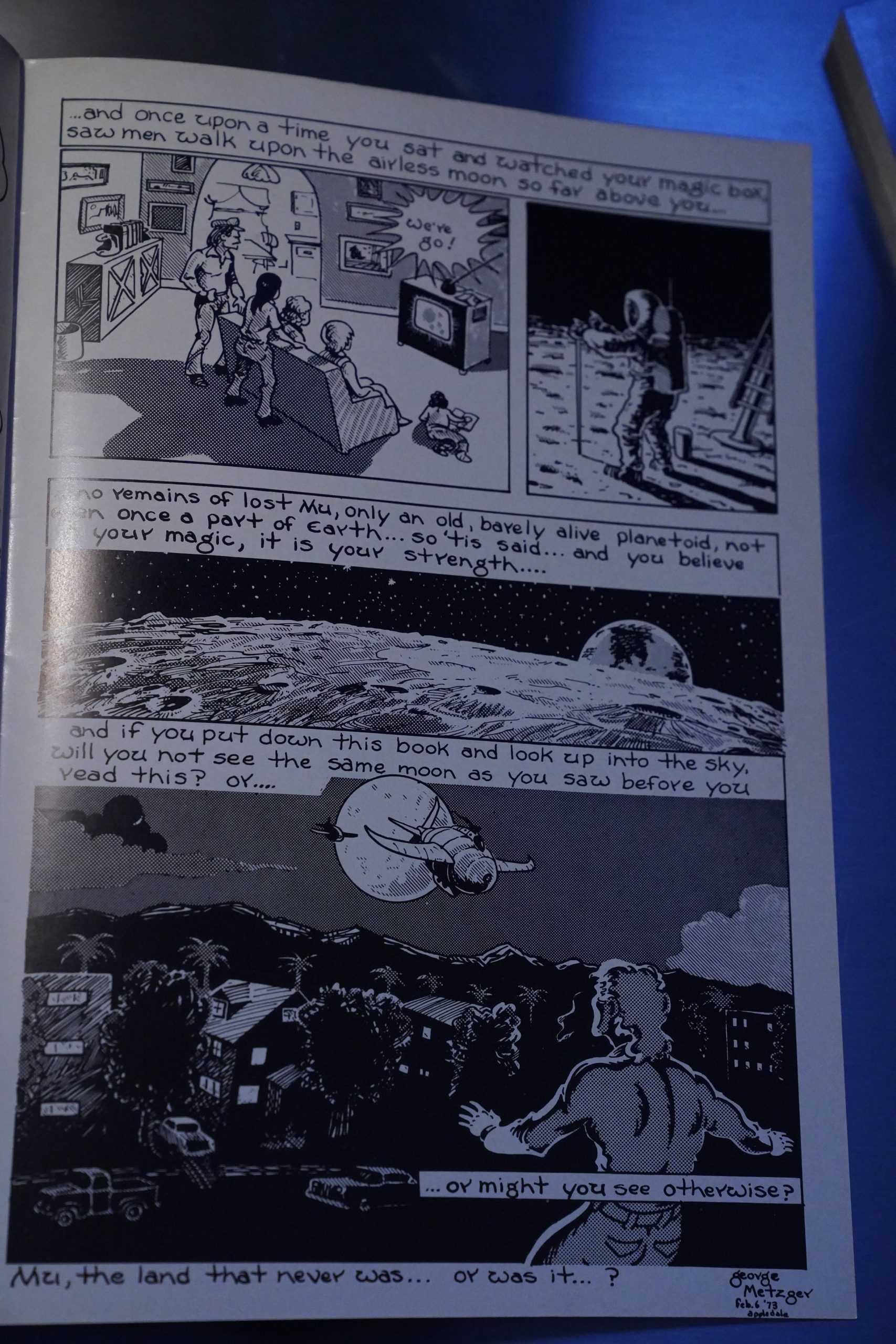 I can see why nobody published this at the time, and it was never reprinted, so I guess it didn’t sell much in 1978, either.

Metzger is interviewed in The Comics Journal #87, page 92:

BURBEY: What was the evo(ution of Mu? Why did ii take six to
be published?
METZGER: did Mu in a marathon work spree, approximately
two months during my first winter in the Slocan. I worked long
Movies were a big influence on me. Still
could be if I could afford to go more often.
days, usually evenings and nights, going to bed at sun-up. I think I
initially intended the book for Bill Spicer, who was trying to do
comic books back then; perhaps his attempt to do Beyond Time had
folded then. Anyhow, Richard Kyle claimed it—he was doing
Wonderuorld—he had the artwork, got it shot, etc., and began mak-
ing payments on it: (My financial records for ’74 and ’75 show
payments—nothing available before then.) But he never got it off.
His bookstore mainly kept him preoccupied I guess.
Anyhow, I was down in California in ’78 and lookink for easy
money and I figured “time’s up. ..it isn’t ever going to be published.”
I was intending to do Moondog for Print Mint, I thought I’d
spread it around a bit, so I approached Denis Kitchen and he
wanted it (Mu), so that was that. The cover art was okay, but the in-
teriors needed refurbishing. I had used a paper that you develop the
tones out of with a fluid: Those had to be touched up, they had
faded. Where they didn’t some out, I whited them out and put in
screens. Some panels were redrawn. Also, Denis wanted a page for a
house ad. This was okay, as I had a two-page spread I wanted to
redraw, so I redrew, too, as there were some awkward sentences.
Possibly Denis made suggestions.
I mailed the originals to Kitchen and he promptly printed it—
damn little delay. got my monies in about three chunks. HOY’ well
it sold for him, I don’t know. Got some okay reviews, even. That it
was done very quickly showed in some of the art, but it came to me
quickly. I was pretty hot and the thing flowed out and any uncert-
ainties all fell into line. Sometimes it was like it wrote itself. I hermi-
raged fordays. I had a small radio that at night brought in far-away
radio stations, even New Orleans. Mostly I listened to a San Fran-
cisco radio station. I remember hearing a friend of mine, Pig-Pen, in
the Dead, had died of a collapsed stomach. He was a bluesman, col-
lected ECS, too. Jee:, and in the morning, I could sit on my doorstep
and watch the Doukhobor funerals next door. A memorable winter.
BURBEY: Mu probably had more sex scenes than any of yur other
work. Was this simply because felt the story called for it?
METZGER: pretty much. I set out deliberately to compose a story
with all the proper ingredients to be epic. I intended it to have sex,
that it be part of the plot, of the characters.
BURBEY: Mu has a lot of with airships, dirigibles, as do some of
your other stories. Where comes your fasclnattön for airships?
METZGER: True, I am quite fascinated by airships, but the origins
of the fascination elude me. Air Wonderstories? Reading books on
the subject? It sort of slipped up on me and there it was.

This is the forty-ninth post in the Entire Kitchen Sink blog series.