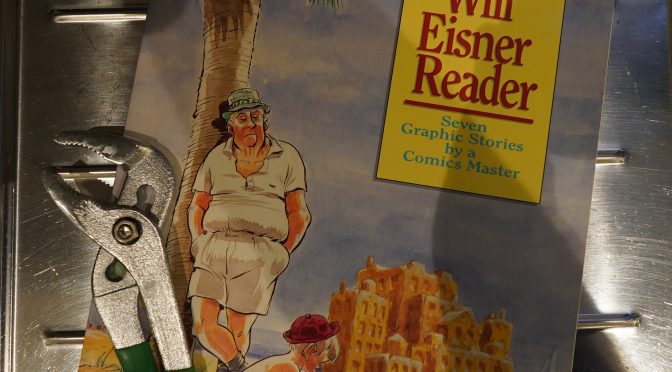 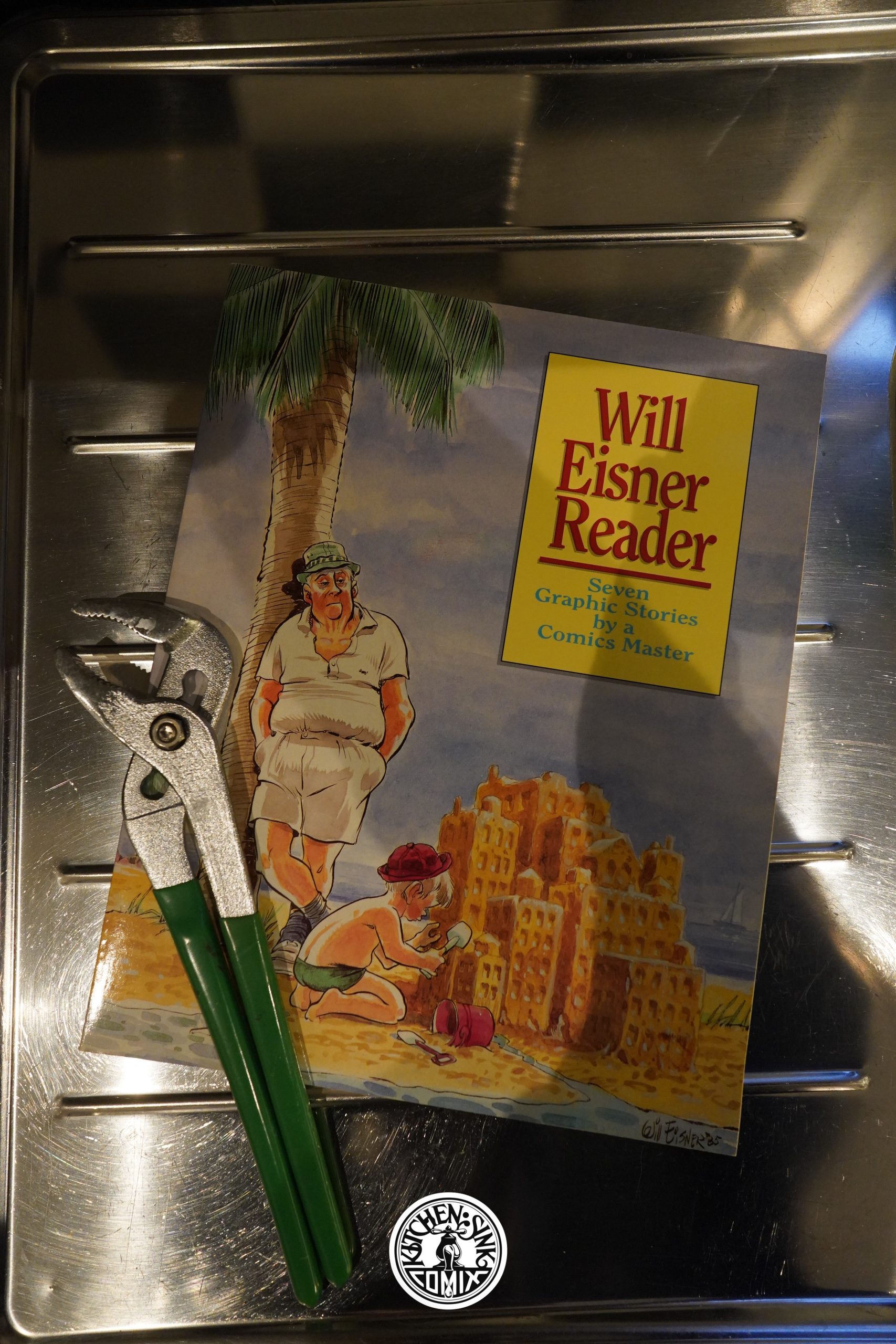 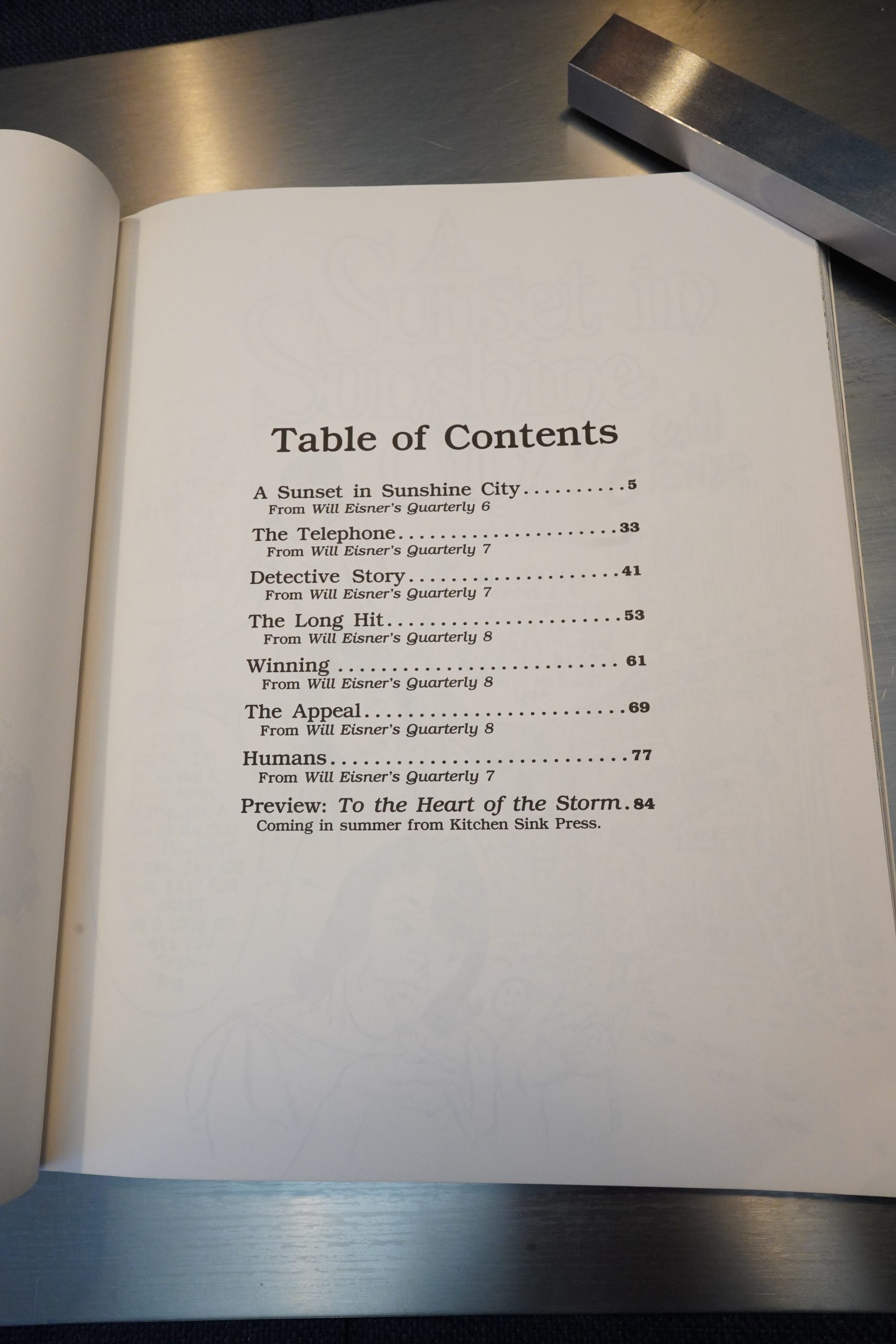 This is a collection of pieces from Will Eisner’s Quarterly… 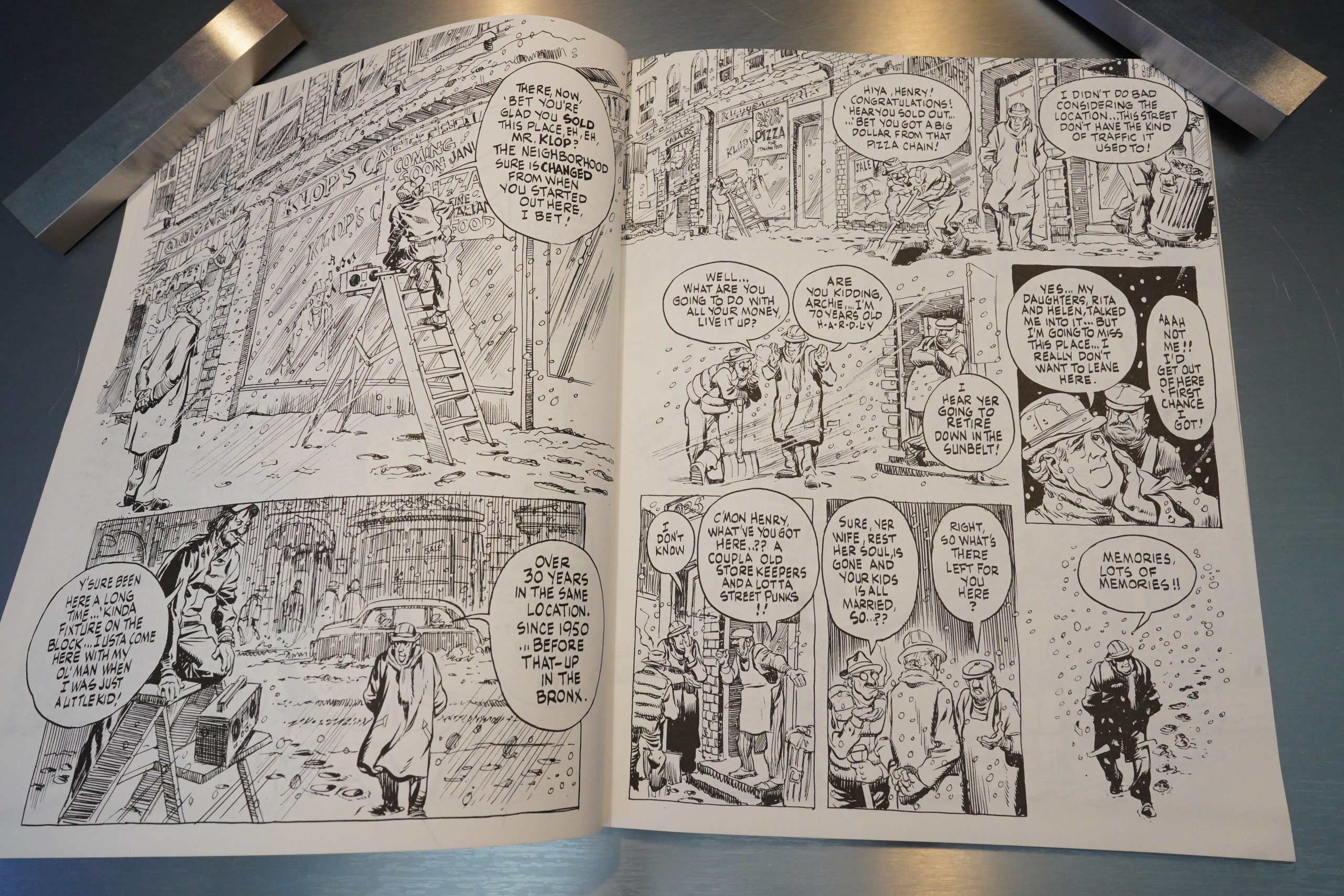 … so I wasn’t going to re-read these stories, but I ended up doing so, anyway. 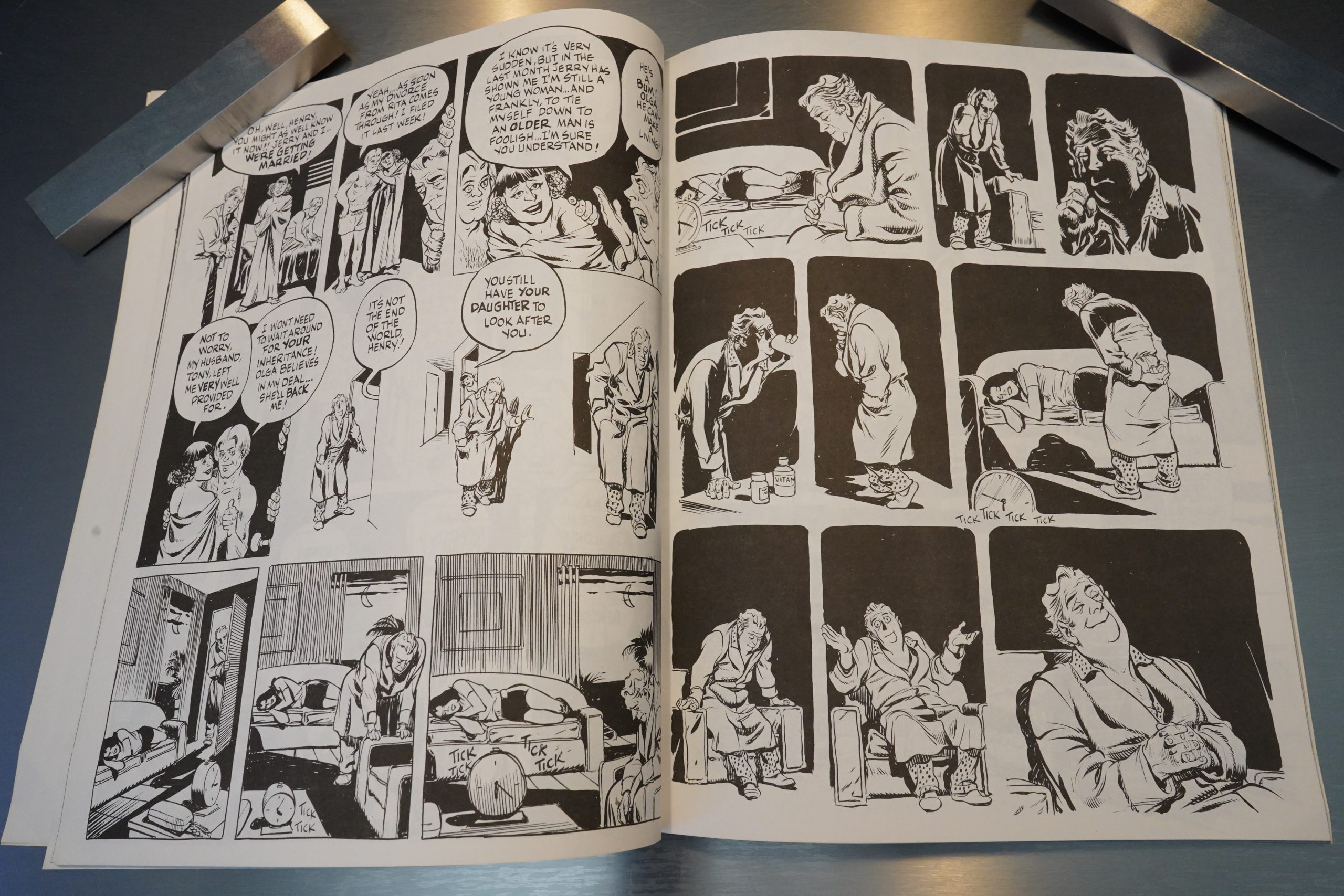 It’s a pretty good selection of works — it includes some of the more satisfying “ironic” stories. 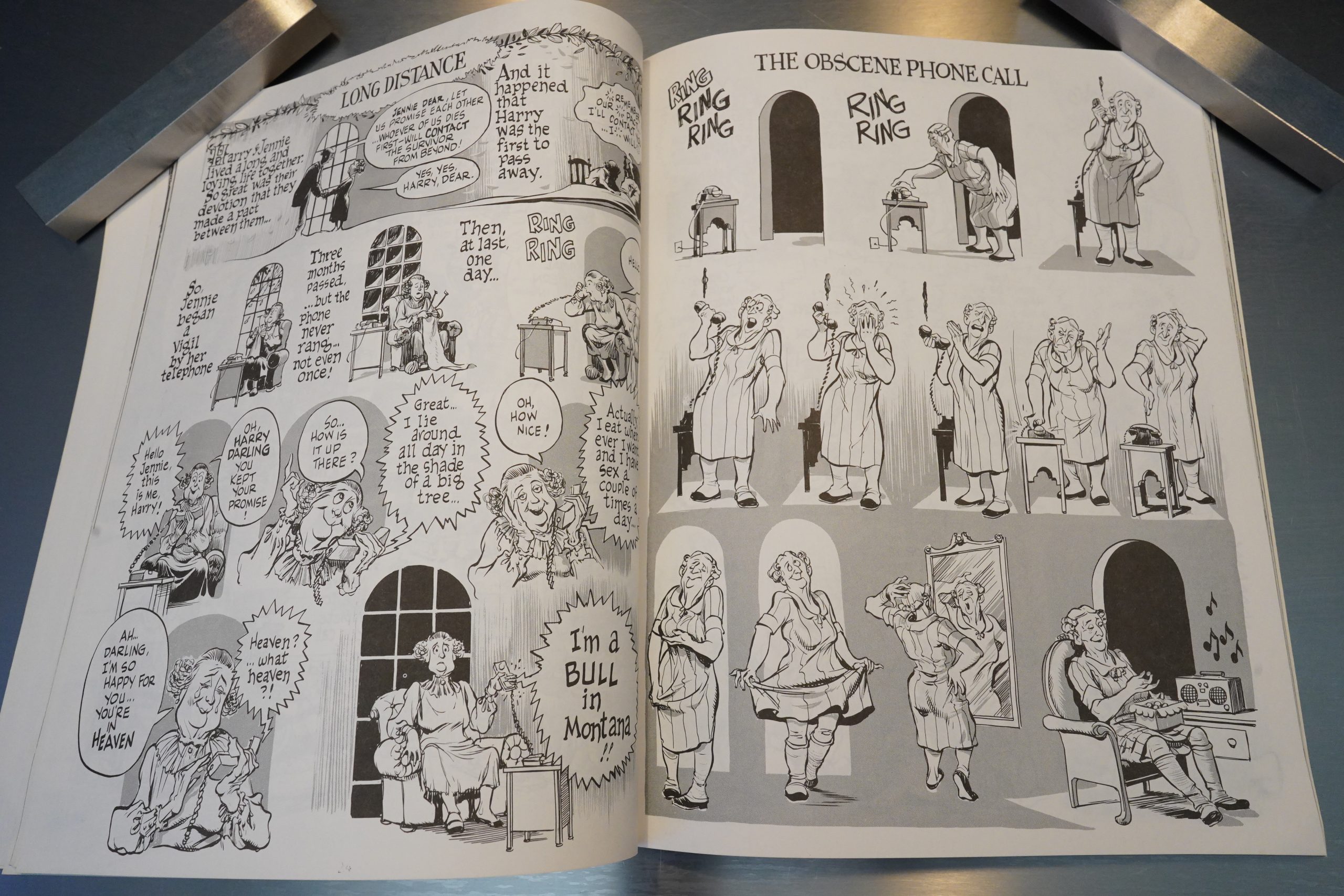 And a collection of one-page slightly off-colour jokes. 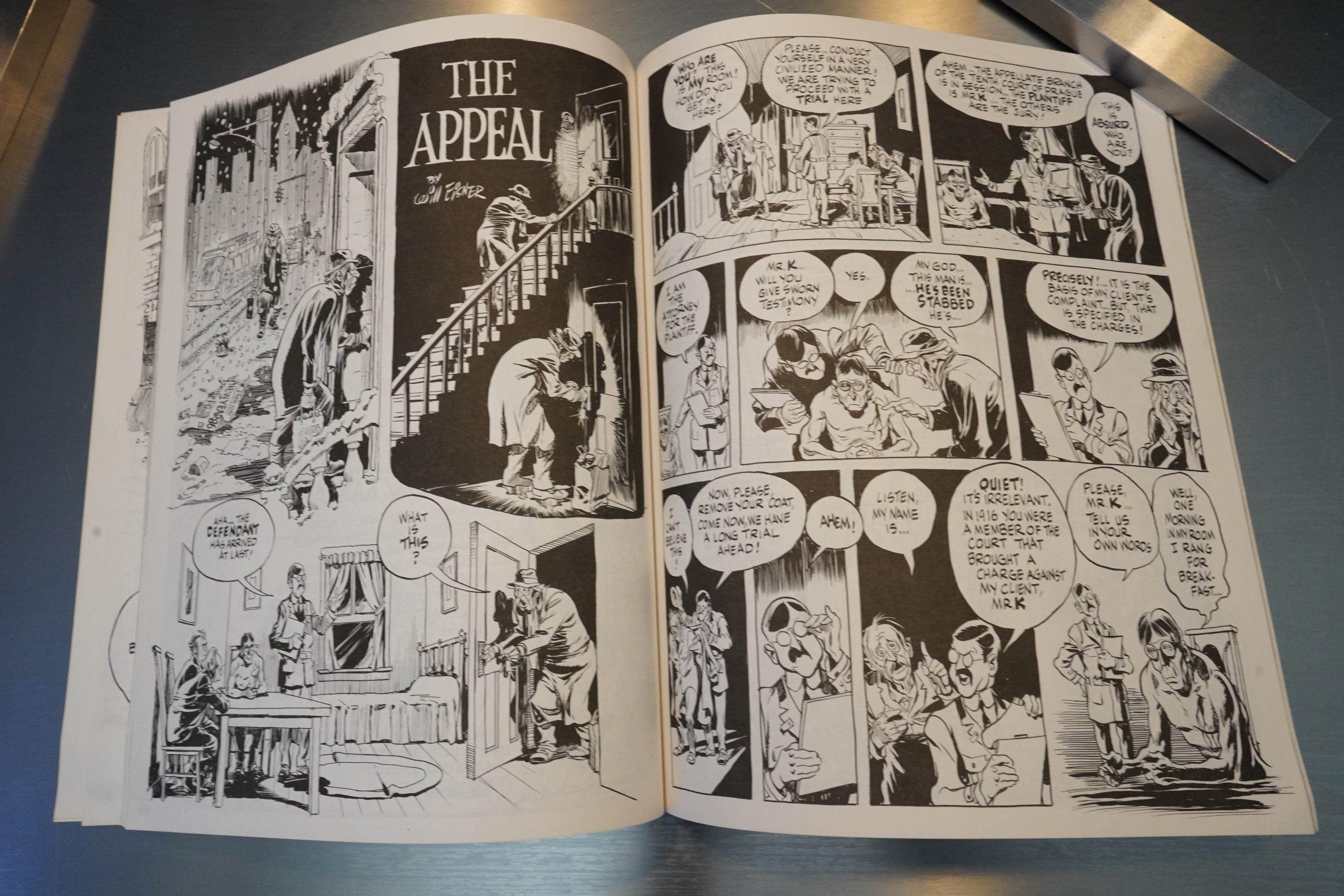 And even a Kafka adaptation. 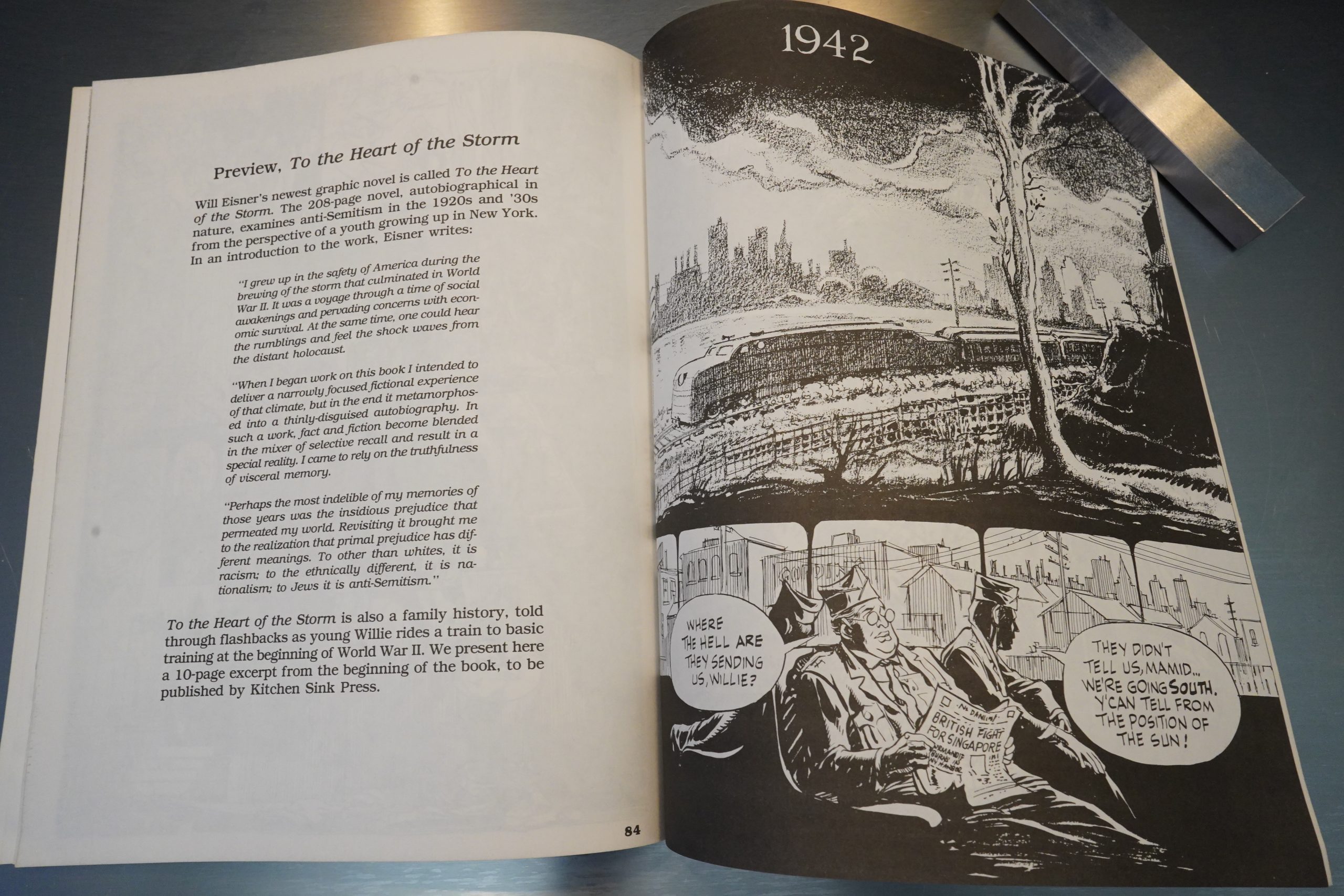 And it ends with an excerpt of To the Heart of the Storm.

It’s a pretty good collection, if you’ve never read any of this stuff. But these stories have also been collected in other books, so…

The reader may have detected a
certain hedging on my part about the
artistic significance Of the third career. I
must confess that I’ve never derived a great
deal of enjoyment from them. Having spent
a lifetime doing work made to order Eisner
was going to do what pleased him, which
wasn’t necessarily What pleased fans of The
Spirit. What I missed in the later work was
the tightness and virtuoso turns of The
Spirit. I’m going to have to take another
look at it without preconceptions one of
these days. Looking at what I have on hand
(The Will Eisner Reader and To the Heart of
the Storm) dispels some misconceptions. To
begin With, think the Whole third career
has to be considered gravy, a gift from Eisner
to his cult and a gift from his cult to Eisner.
Next, the commonly held belief that there
was a great falling off after A Contract With
God won’t hold water. It would be more
accurate to say that many of us upon reading
Contract concluded (a) that we’d seen late
Eisner and (b) that we’d seen enough of it.
The style of late Eisner is looser than early
Eisner but it’s not loose. He didn’t lose a lot
of skill to age, and he didn’t “grow” a whole
terrible lot. It’s as if he had learned to play
the clarinet, and at a certain point he knew
how; the playing became a little mellower
and less showy With age but didn’t change
much in its essentials. The virtuosity of
The Spirit I suspect had more to do with
injecting originality into formulaic material
and later on maintaining interest in subject
matter that had come to bore him. The
stories in the Reader, which are not bad at all
for the most part, are a lot like the material
he was interpolating into the postwar Spirit.
Eisner a natural spinner Of yarns. He
was a sentimental ironist whose sentiment
is leavened by a Lardneresque cynicism
about human nature. He was usually more
sophisticated than hc seemed at first. He
aimed to subvert cliché, but (he subversion
often comes so latc in the Story that cliché is
the dominant impression.
Take “A Sunset in Sunshine City”
from the Reader. It appears to be standard
melodrama: A widower whose business is
slowly fading is convinced by his daughter
to retire [o Florida. As he looks around the
old neighborhood for the last rime his mind
is filled With bittersweet reminiscences about
his domineering Wife and his daughter’s
marriage to a nogoodnik against his wishes.
In Florida he meets a slightly younger fellow
retiree Who pursues him and eventually
convinces him to remarry, though he doesn’t
seem that enthusiastic. This sends a shock
up the coast, because the nogoodnik son-
in-law had been counting on the eventual
inheritance to shore up his shady business
deals. He pressures the daughter to come
down with him to Florida to put the kibosh
on the marriage. It’s not until the last
three pages that the string is pulled. The
nogoodnik has discovered that the matron
has more money than the widower. He asks
her to marry him instead, and she is quite
satisfied to be used in this way if it means a
young man in her bed. Initially the widower
is upset by this development, but in a deft
wordless sequence it dawns on him that
his situation is not nearly as bad as it first
appears. After a lifetime of being pushed
around by every female in his life from Start
to finish, he realizes that his to be divorced
daughter is now entirely dependent on him.
As the story ends he’s got her waiting on him
hand and foot.
In To the Hearn Storm the semi-
autobiographical main character, a recruit
en route to be trained to fight the ultimate
expression Of anti-Semitism, reflects on
episodes of anti-Semitism in his life and the
life of his family. TO begin With, the framing
device is a bir glib. The larger problem,
however, is that he’s addressing subject
matter that’s been done by some of the finest
writers of the last century, and comparisons
are inevitable. And the largest problem is a
failure of reflection, i.e., that if his character
is anything like him then he’s spent the last
several years retailing racial caricatures, and
will resume upon his return. Now, I’m not
one of those people who wrings his hands
over Ebony White, and Eisner had examined
his conscience and found it clear, but not to
confront this issue renders his self-analysis
superficial.

Well, I guess that’s a point…

This is the one hundred and thirty-second post in the Entire Kitchen Sink blog series.