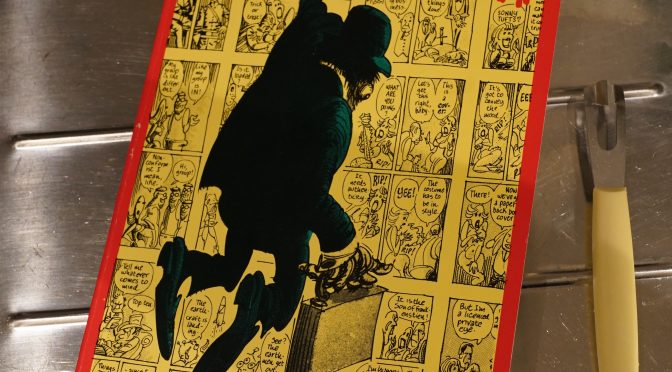 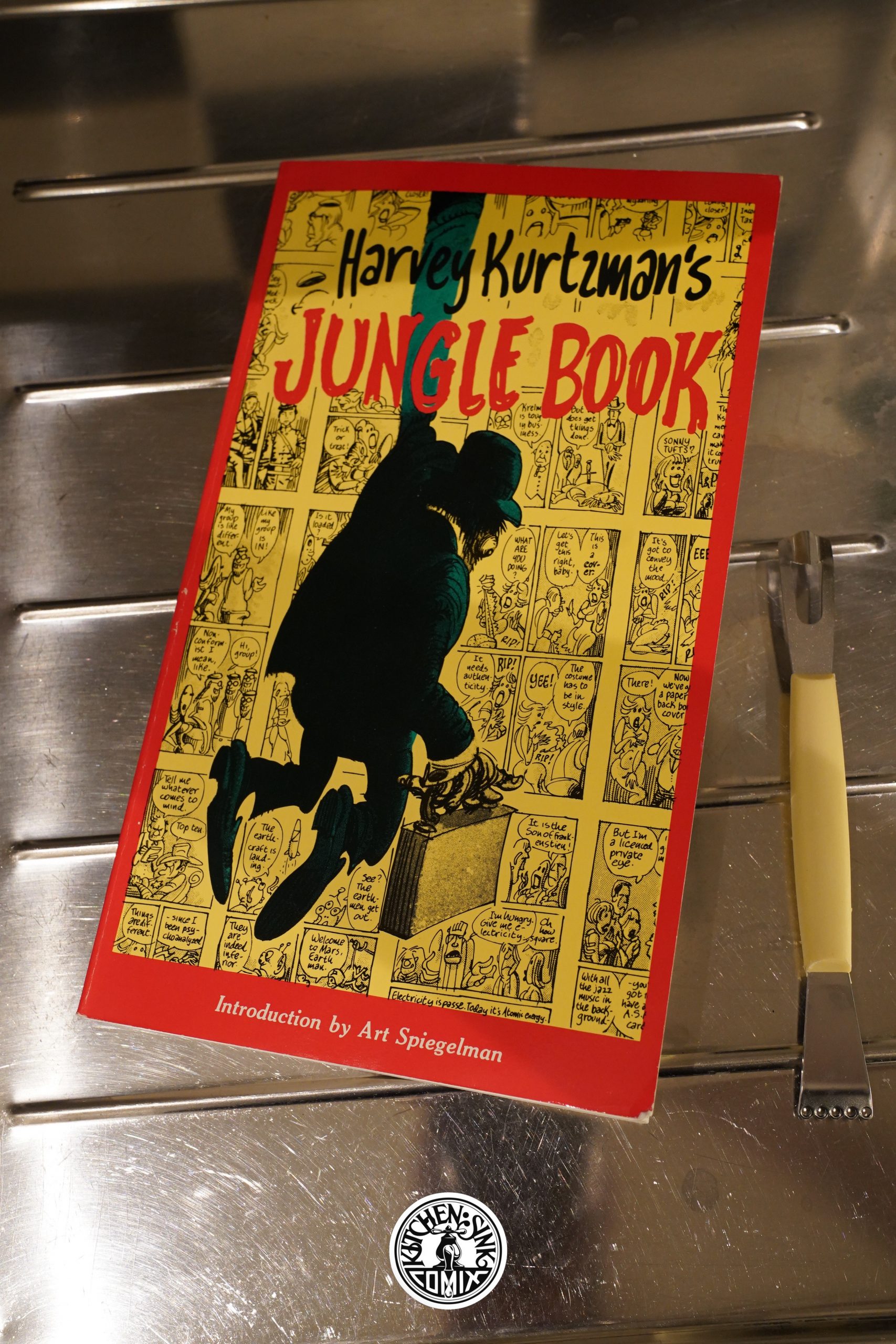 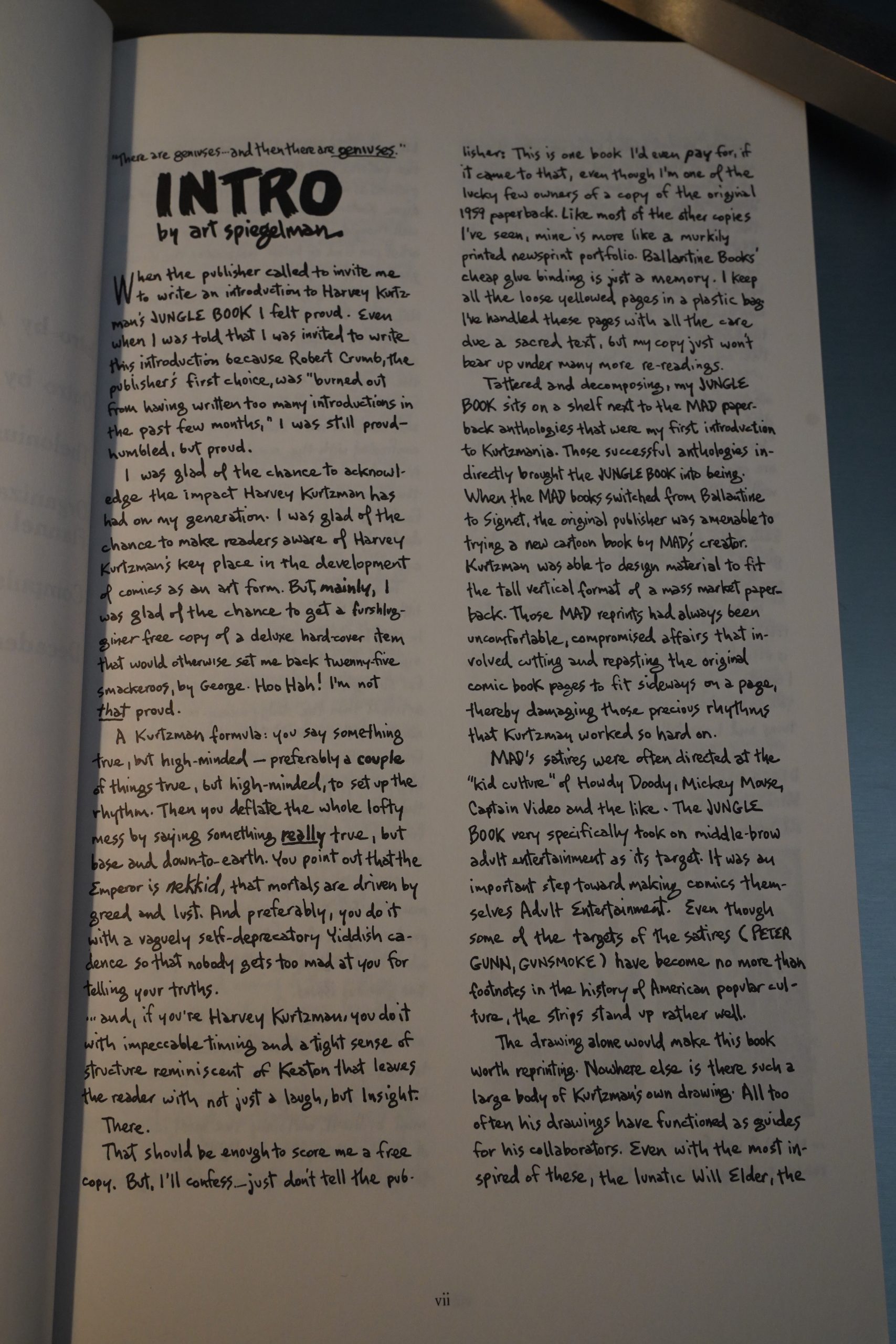 As Art Spiegelman explains in the introduction, this book was originally published in 1959 by Ballantines as a pocket book — so about half the size of this book and on normal paperback stock.

And Kurtzman drew the thing on blue-lined paper that was supposed to not be picked up by the repro camera… but it was, giving the entire thing a rather messy look. 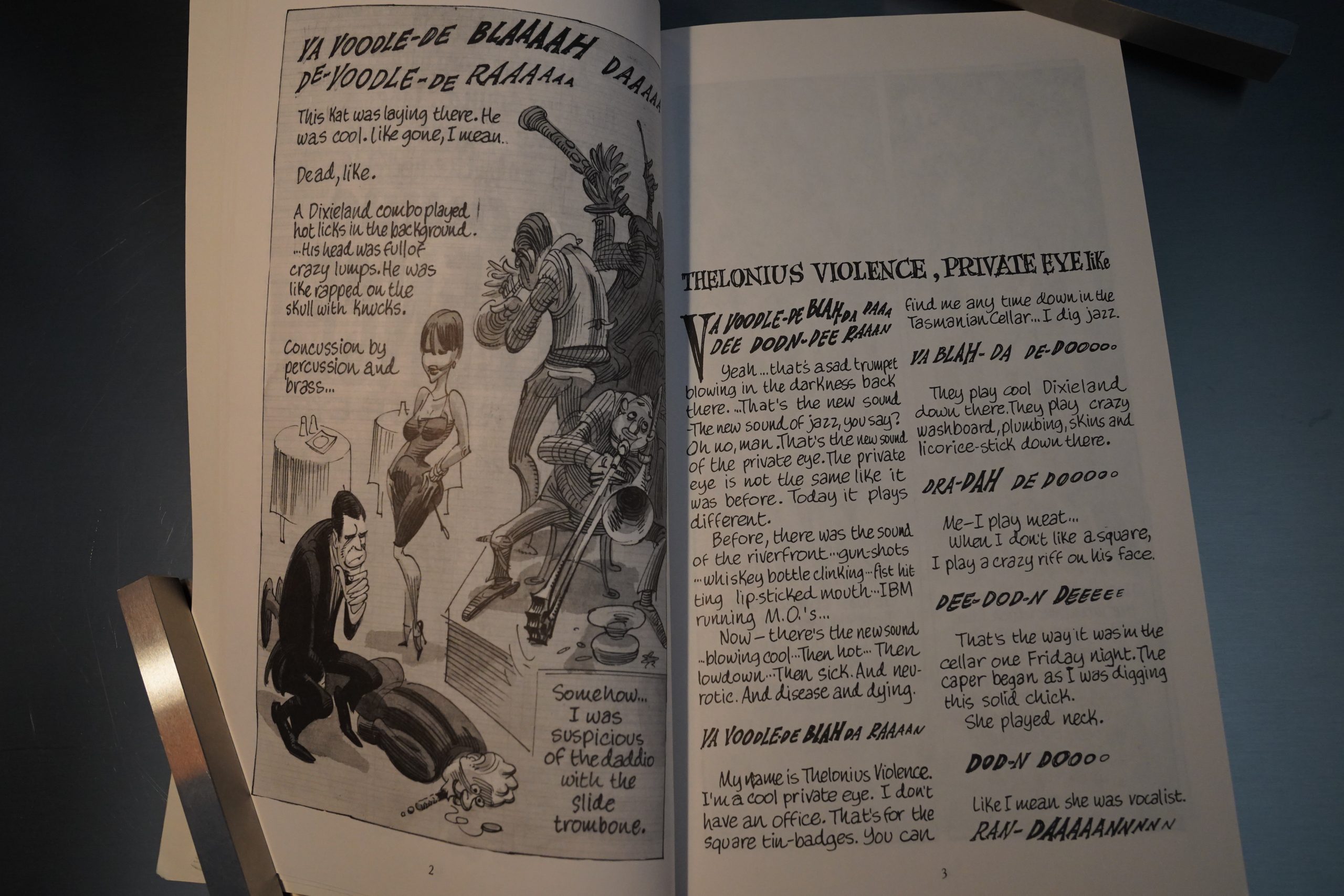 This is, of course, another book of Kurtzman-style parodies (and satires). The first story is a parody of the Peter Gunn TV series, which I’ve never seen, so I have absolutely no idea whether this is on point or not. I’m pretty sure it’s not actually that funny, though. 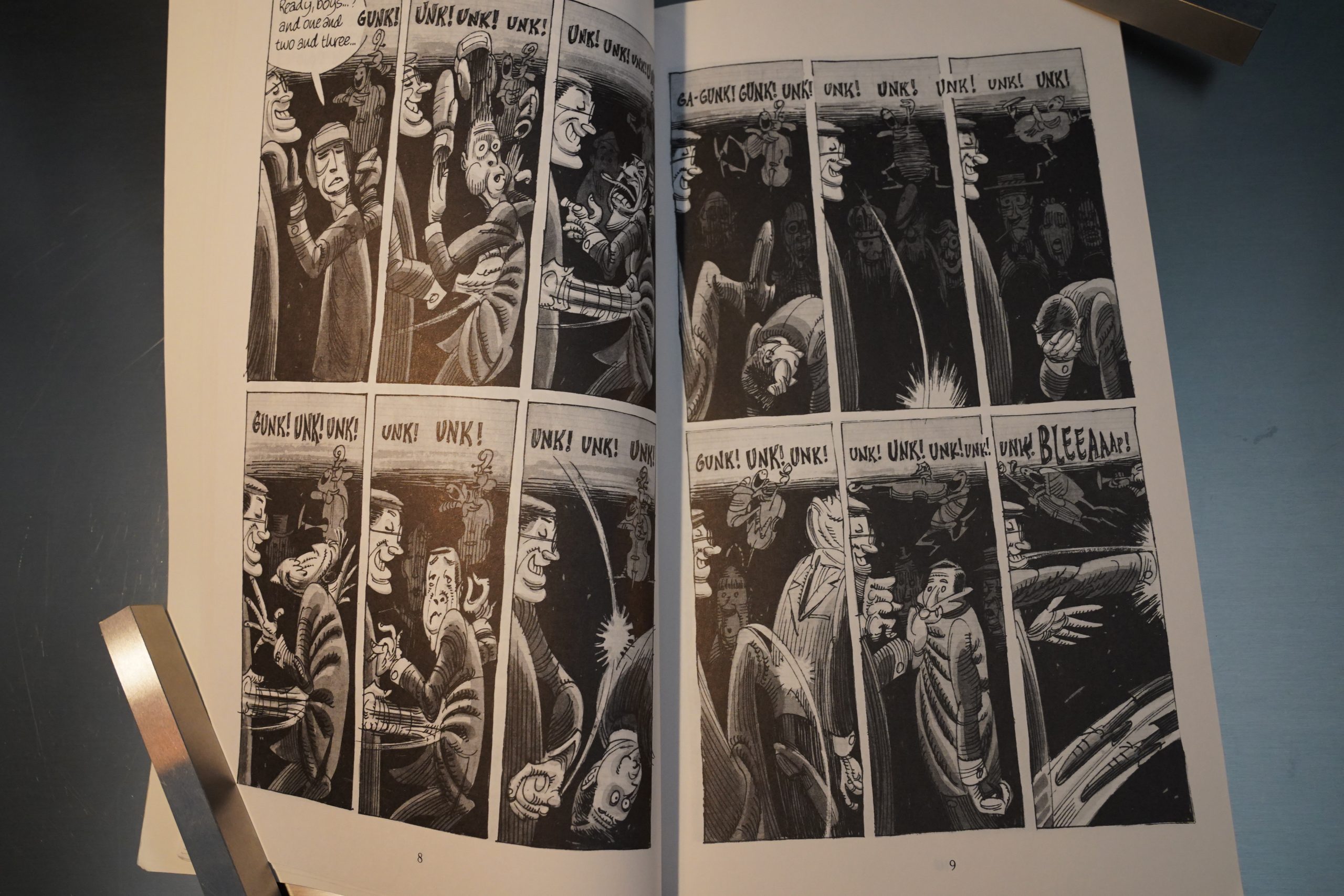 However, the artwork sure is nice. 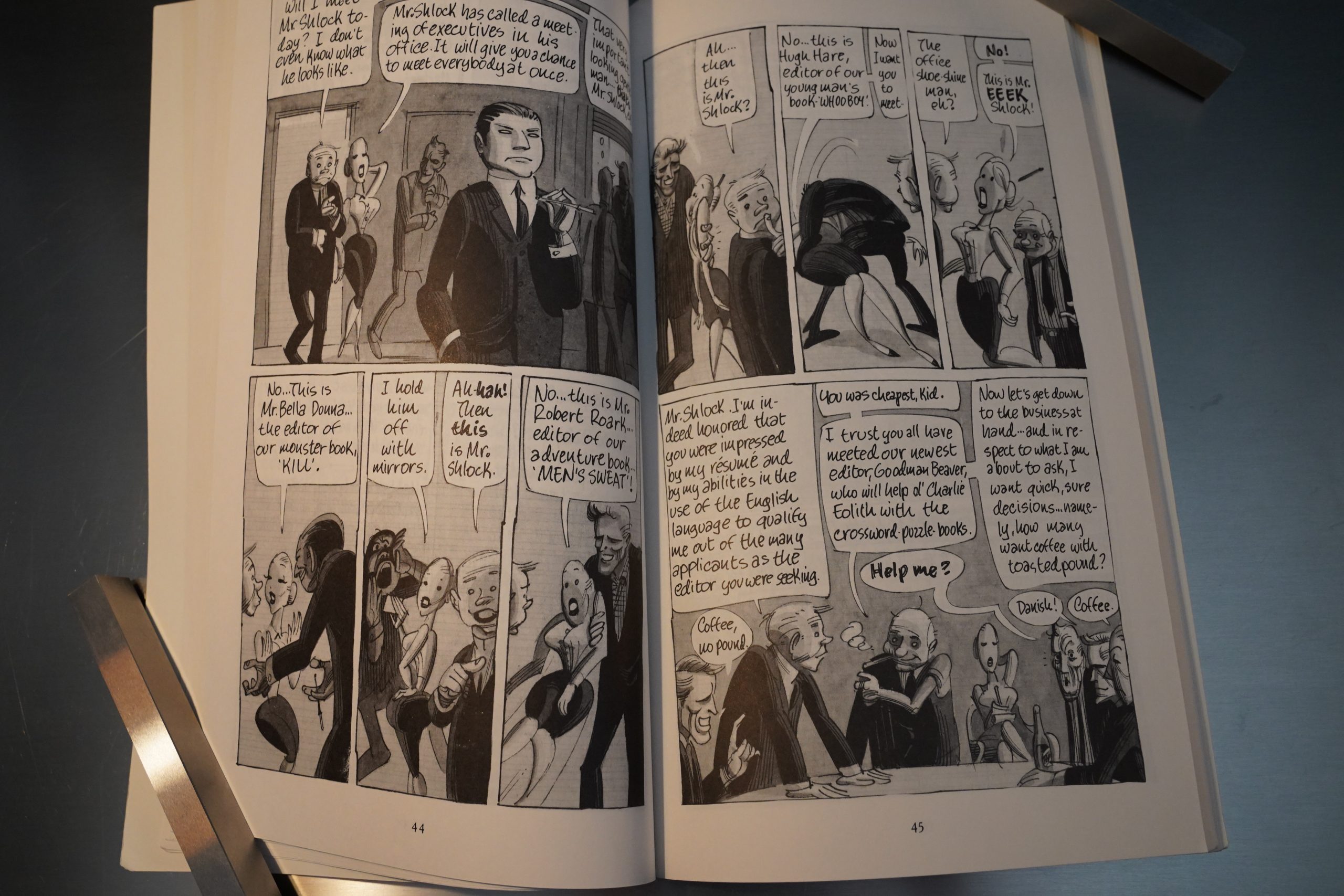 The second story is much more successful — it’s a poisonous look at the magazine publishing history, so here Kurtzman gets to vent on his own behalf. 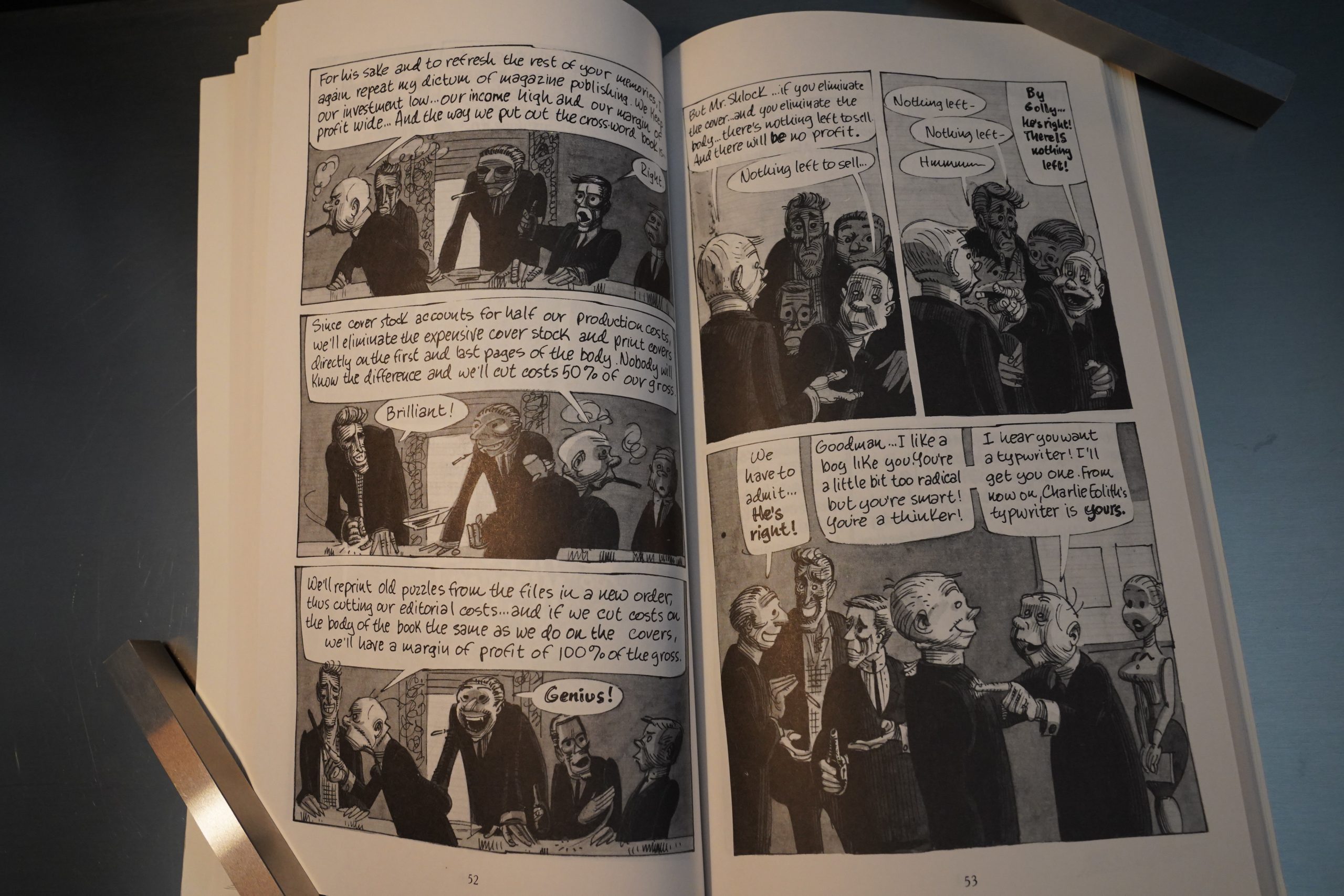 It turns out that publishers are venal, petty creatures. Who knew? 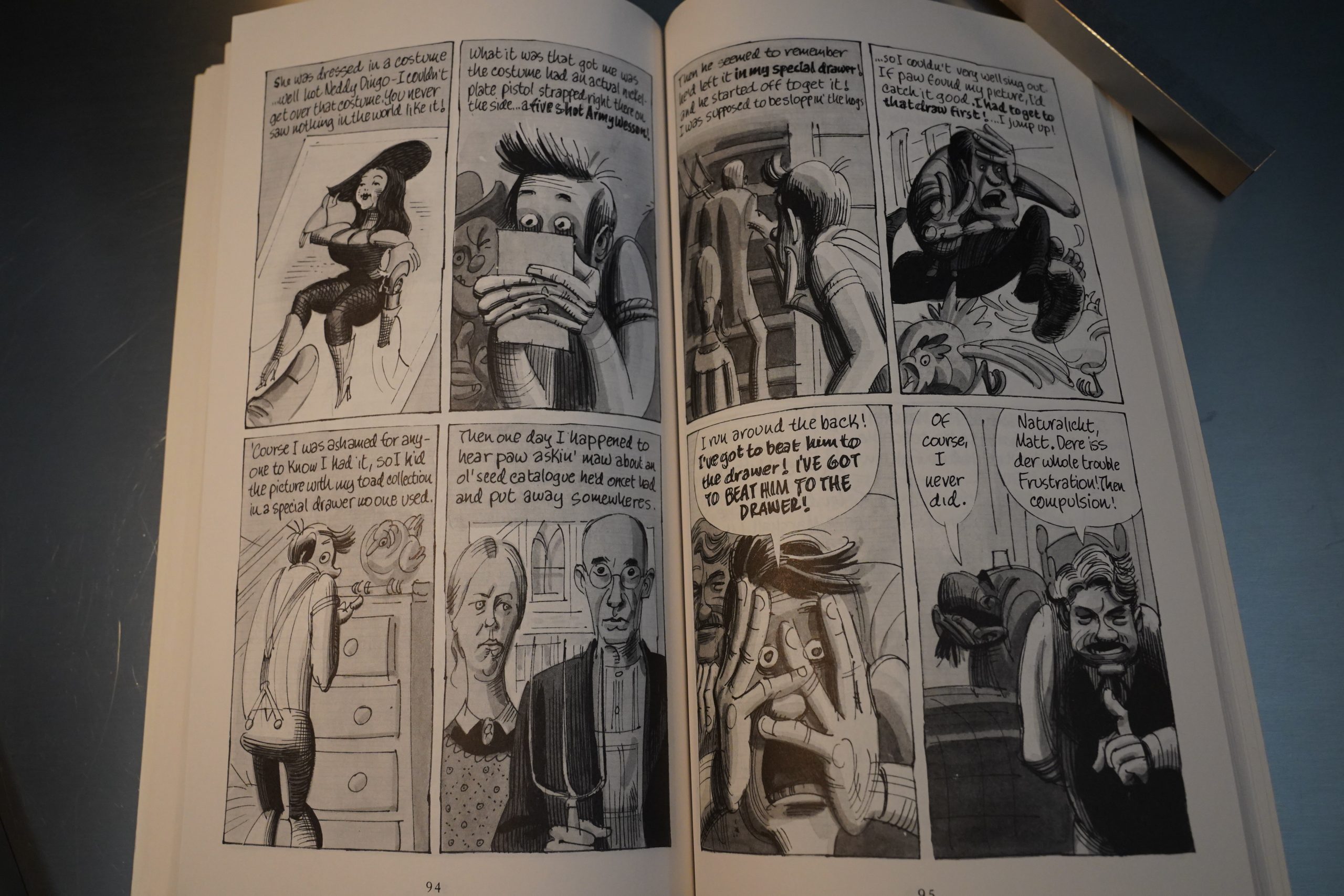 The cowboy parody has more gags, and this thing, where a psychologist teases out why the sheriff feels the need to have shootouts where he can see whether he can draw the gun faster than anybody else… it’s pretty ingenious. 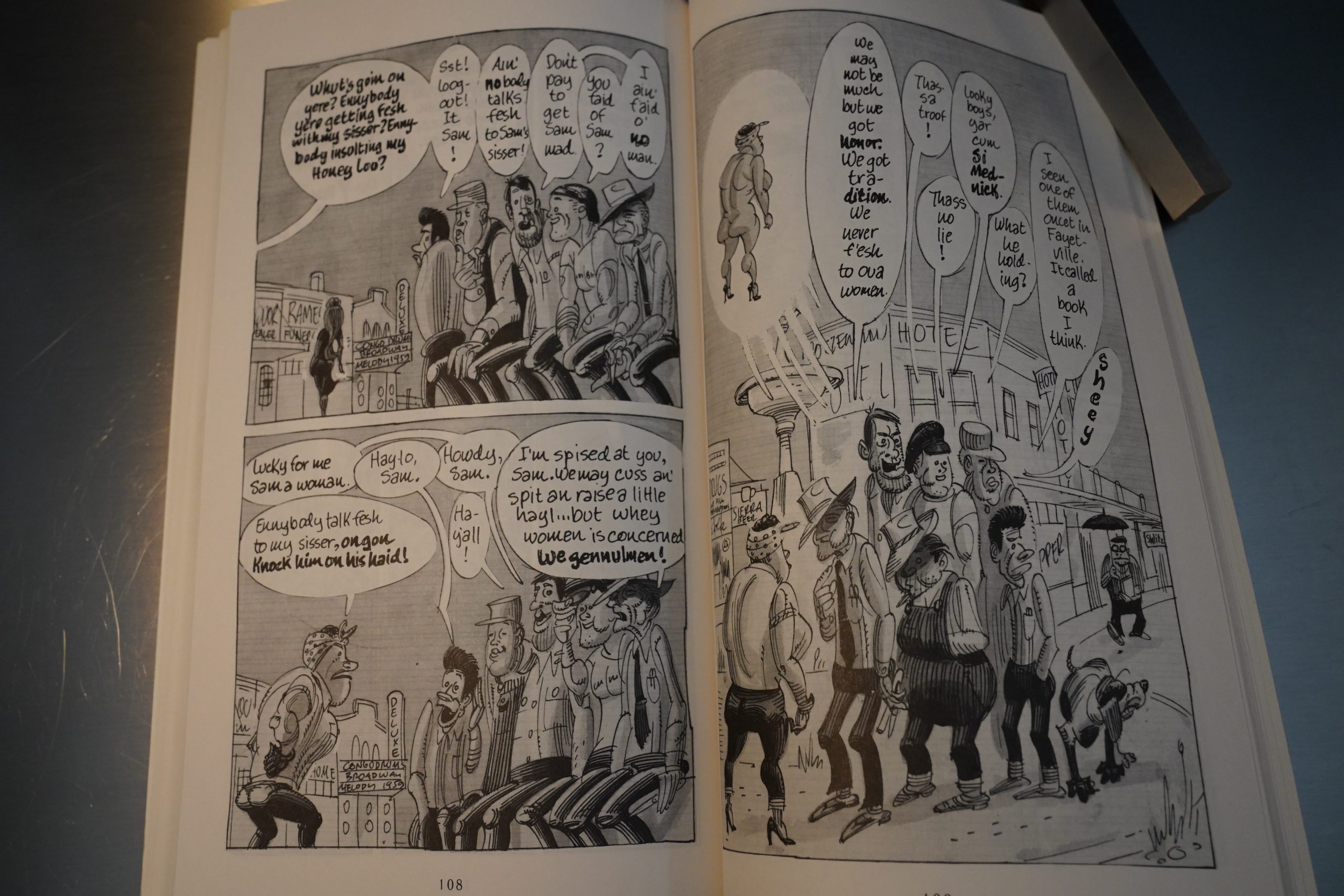 Finally, Kurtzman takes a look at Texas, and determines that Texans are all morons. It seems pretty accurate and is drawn from his time there.

The book reads well, overall — it’s fun to look at Kurtzman’s characters and line work. However, most of the gags are pretty weak, but I can see myself thinking it was pretty clever when I was, like 14.

Three remarkable new publications, each
preserving significant work from an
acknowledged comics master for posterity,
have appeared from Kitchen Sink Press
during the past six months. Each is a
cultural treasure, and Kitchen Sink merits
praise for investing the time, effort, and
expense to make available what are, I sus-
pect, only marginally profitable projects.
The first is a hardcover reprint edition
Of Harvey Kurtzman’s Jungle Book.
Jungle Book has historical significance as
the fißt mass-market paperback to consist
of entirely original comic material. (Bal•
lantine Books commissioned the book in
1959 as competition for the popular line
of MAD paperback reprints.) Mostly, it
is the stunning show of a gifted satirist—
perhaps the most subservise talent ever
to have worked in comics—performing at
the peak of his skills.

The book’s second piece, “The Organ-
ization Man,” is a genuine classic, repre-
senting a certain mode of satire that
Kurtzman pioneered during the 1950s. It
is a venomously funny black satire on the
corrupting effects of greed in the New
York publishing world. (The title derives
from three influential books written about
the business world during the 1950s, so
the story has its origins in parody as well;
Man in the Grey Flannel Suit and Exec-
ulive Suite were hugely popular film
adaptations of best-selling novels.) Kurtz-
man kicks off the story by having Good-
man Beaver arrive for his first day on the
job at “Shlock Publications.” During the
corpus, Kurtzman traces the perversion
Of Beaver’s innocence. Not only is the
story ruthlessly funny, it is a kind of
autobiographical document attesting to
the surreal excesses Of the publishing
industry as Kurtzman experienced them.
(Early in his career, Kurtzman edited
paperback crossword puzzle editions, as
Goodman Beaver does in the story.) Al-
though this kind of satire has been wide-
ly imitated since the ’50s, “The Organi-
zation Man” holds up beautifully. It has
real bite as an indictment of the exploi-
tative mentality Of those who produce our
mass culture

And, as Art Spiegelman correctly
points out in his introduction, the words
also have a wonderful comic rhythm
unique to Kurtzman. They form an in-
tegral part Of the visual progression.
The second distinctive Kurtzman qual-
ity is the wonderfully loose, fluid sketch-
iness that imparts such an immediate
sence of the artist’s absolute immersion
in the act of cartooning.

At 140 brilliant pages, theJungle
Book is certainly Kurtzman’s most
substantial graphic achievement.
The vigor and immediacy of the
brushwork, the bold use of tones,
the hypnotic pattern Of sustained
and broken visual rhythms from
panel to panel and page to page,
make it one of the most formally
inventive comic books ever pub-
lished. And Kurtzman’s mordant
wit, freed from the constraint of
shorter magazine pieces, would
never again display as pitiless a bite.
That last Frontline Combat story,
a meditation on fate, Was called
“The Big ‘If.” Harvey Kurtzman’s
Jungle Book provides the biggest “if’
the romantic travails ofits namesake
lead. The strip later became a kind of
adventure-comedy, as Tubbs, and
soon enough, too-similar pal Gozy
Gallup, practiced hijinks and farcical
comedy in a number Of locations
across the world. Things finally fell
into place with the arrival ofsoldier
Of fortune (in typical Crane
fashion, he made his debut by break-
ing down a door). With Easy
providing the muscle and a sense Of
in comics’ history: What if it had
been a success? What if Kurtzman,
instead of being forced to leapfrog
from more failed anthologies to the
compromised Little Annie Fanny to
teaching and illustration jobs, had
been able to recreate himself as a
one-man satirical storyteller — writ-
ing and drawing for magazines and
books? What ifhe had succeeded in
carving a niche in the mainstream
publishing world, into which the
whole next generation of cartoon-
isb could have poured — short
Story writers, essayisß, and novelists
who just happened to work in the
comics form?
Harvey Kurtzman’s Jungle
Book remains one Of the artform’s
most stunning successes, and one
of the field’s most heartbreaking
failures.

Kurtzman also had the #64 and #63 spots in the list (with Goodman Beaver and Hey! Look, and probably more). That’s a … list of its time, eh?

The book has been reprinted by Dark Horse:

I’d read this in the Ballantine paperback, muddy art and all, but the material looks much better here and the introductory material helps put it in the context of Kurtzman’s career. Unfortunately, I’m inclined to agree with Crumb’s assessment in the the afterward/interview that closes the volume. Kurtzman isn’t very funny here and the material feels considerably less sharp than his work for Mad and Trump. There is an air of weary desperation about some of it and time has rendered even the edgy bits a little pale.

Spiegelman says in his introduction to this edition that he was only offered the job because Crumb turned it down. But they got Crumb to do the introduction to a later edition. Heh heh.

Most people seem kinda unimpressed but don’t want to say so:

And in the end I’ll say, you should read it. Or something by Kurtzman. He was an important figure in American comic, and has influenced countless creators. Many of whom have gone on to call him a genius. He was a visionary and something quite rare: a truly funny cartoonist.

Kurtzman has a very readable visual style, combined with an excellent ear for dialogue. But these strips feel a little throwaway, and, indeed, were originally published as a small pulpy paperback – the posh hardback edition feels like it’s trying too hard. Still, it’s a fun and clever read.

This is the eighty-sixth post in the Entire Kitchen Sink blog series.