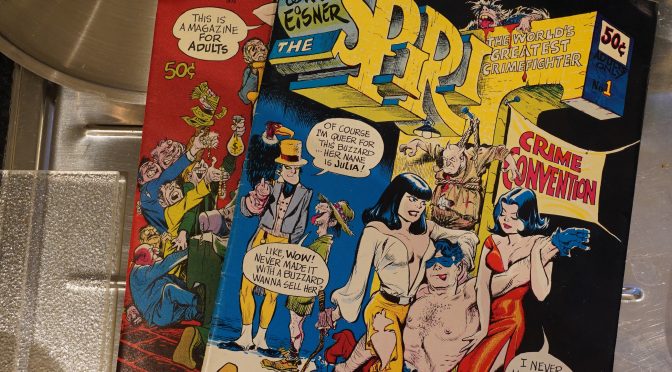 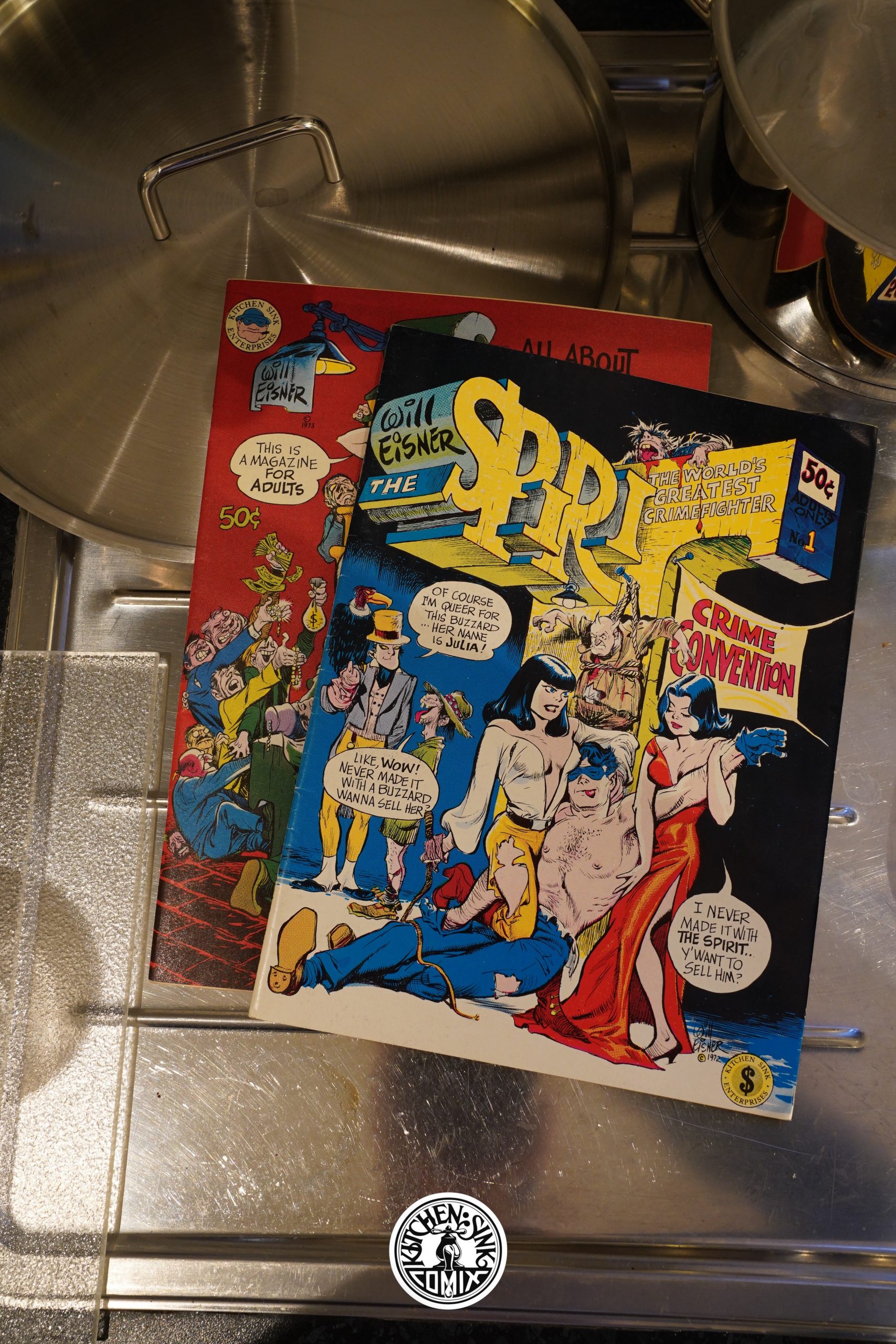 Despite lasting only two issues, this is a significant series in the Kitchen Sink saga: It was the start of the long relationship between Will Eisner and Kitchen Sink, and Kitchen Sink ended up publishing more pages by Eisner than by anybody else. And while Kitchen didn’t publish A Contract With God, Eisner’s return to comics after taking some decades off, they did publish most of his subsequent work.

And that led to a higher profile for Kitchen Sink, and more respectability: For a time in the 80s, A Contract With God was considered (by some) to be the first graphic novel, and the start of the wave of literary comics that Eisner’s subsequent works fitted well into.

These days… I think Eisner’s 70s and 80s work has been mostly forgotten?

But I’m getting ahead of myself. 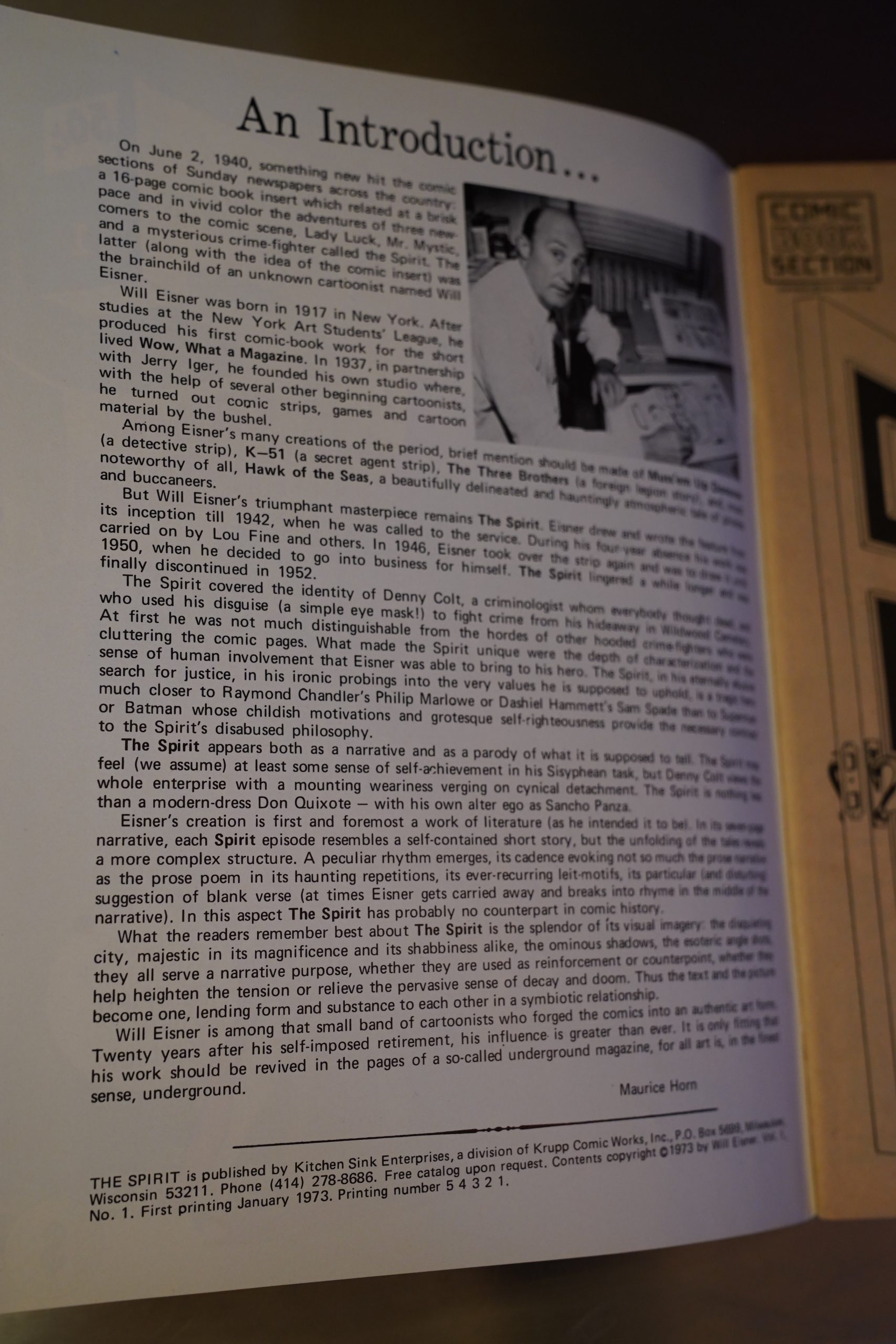 Maurice Horn does the introduction, and lays it on quite thick, but that’s perhaps natural… “childish motivations and grotesque self-righteousness”, eh? I guess he doesn’t like super-hero comics much. 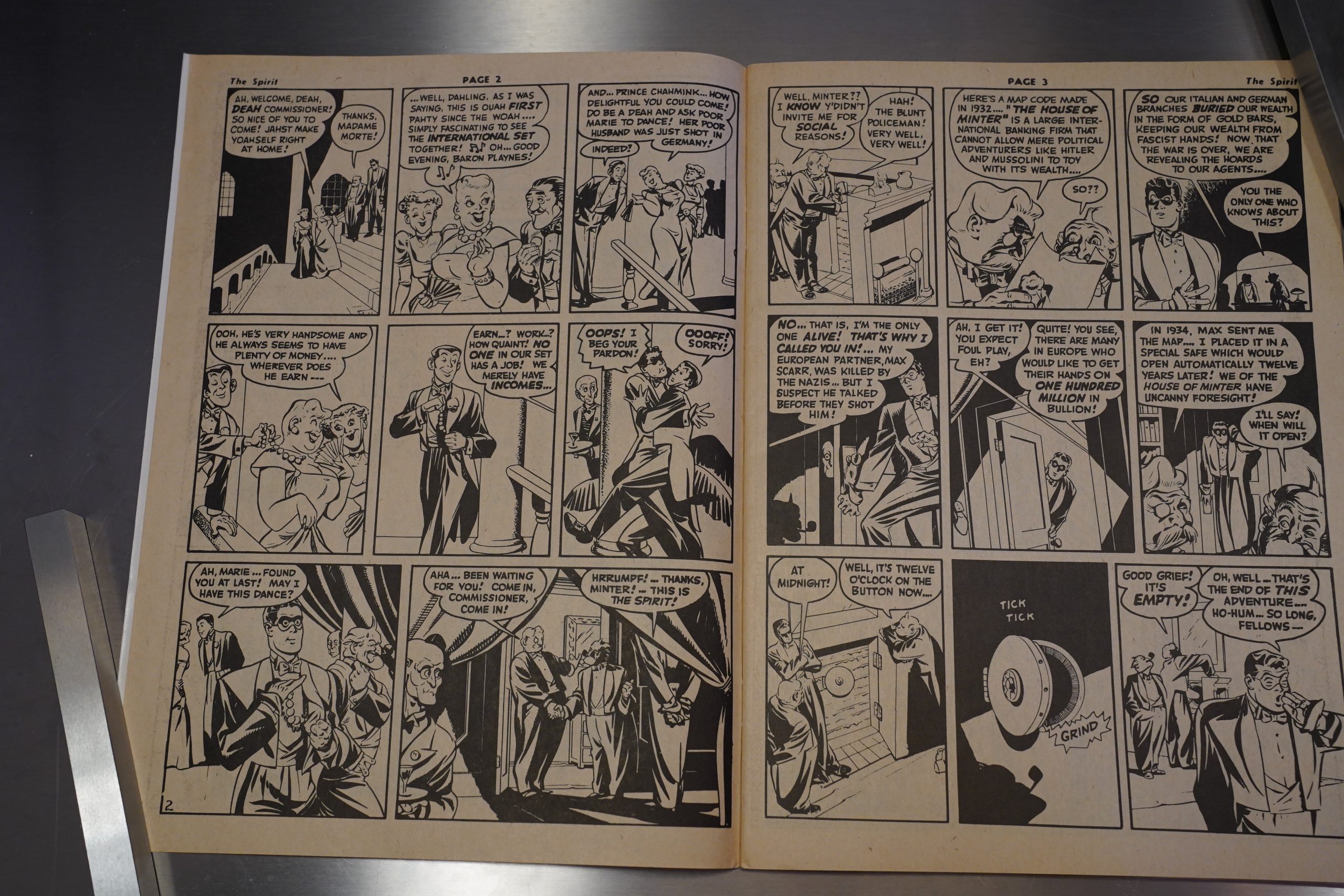 Anyway, we start off with a strip from 1946, and it’s a perfect as an introduction: It’s a simple little mystery, but it really does feel like reading a short story (as Horn said). Eisner achieves this by cramming so much into these seven page — and he does this by having several narratives going at once. The commissioner is talking about something in the dialogue, and The Spirit is doing other stuff in the artwork, and it’s a really pleasing little thing. 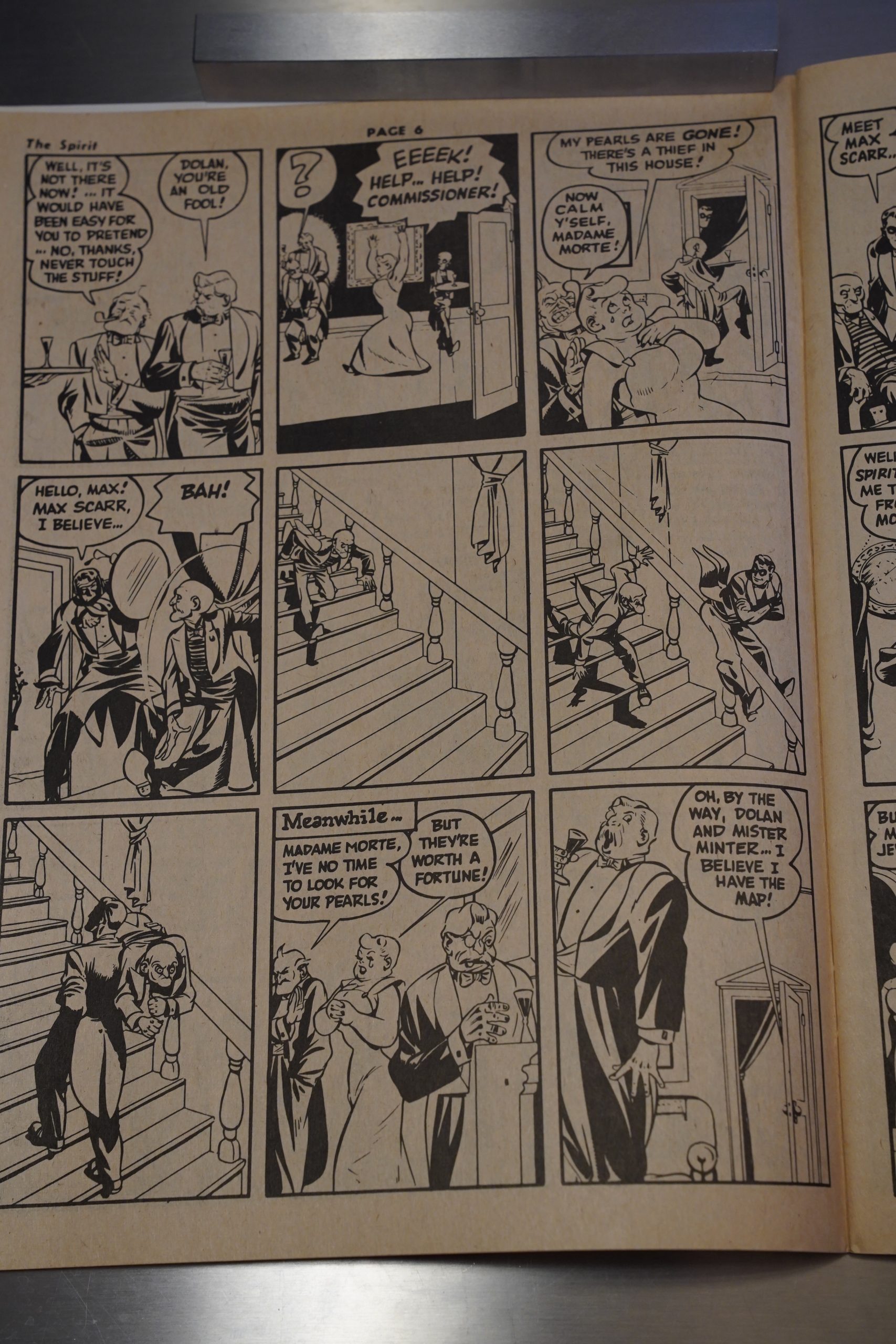 And I love that action scene. 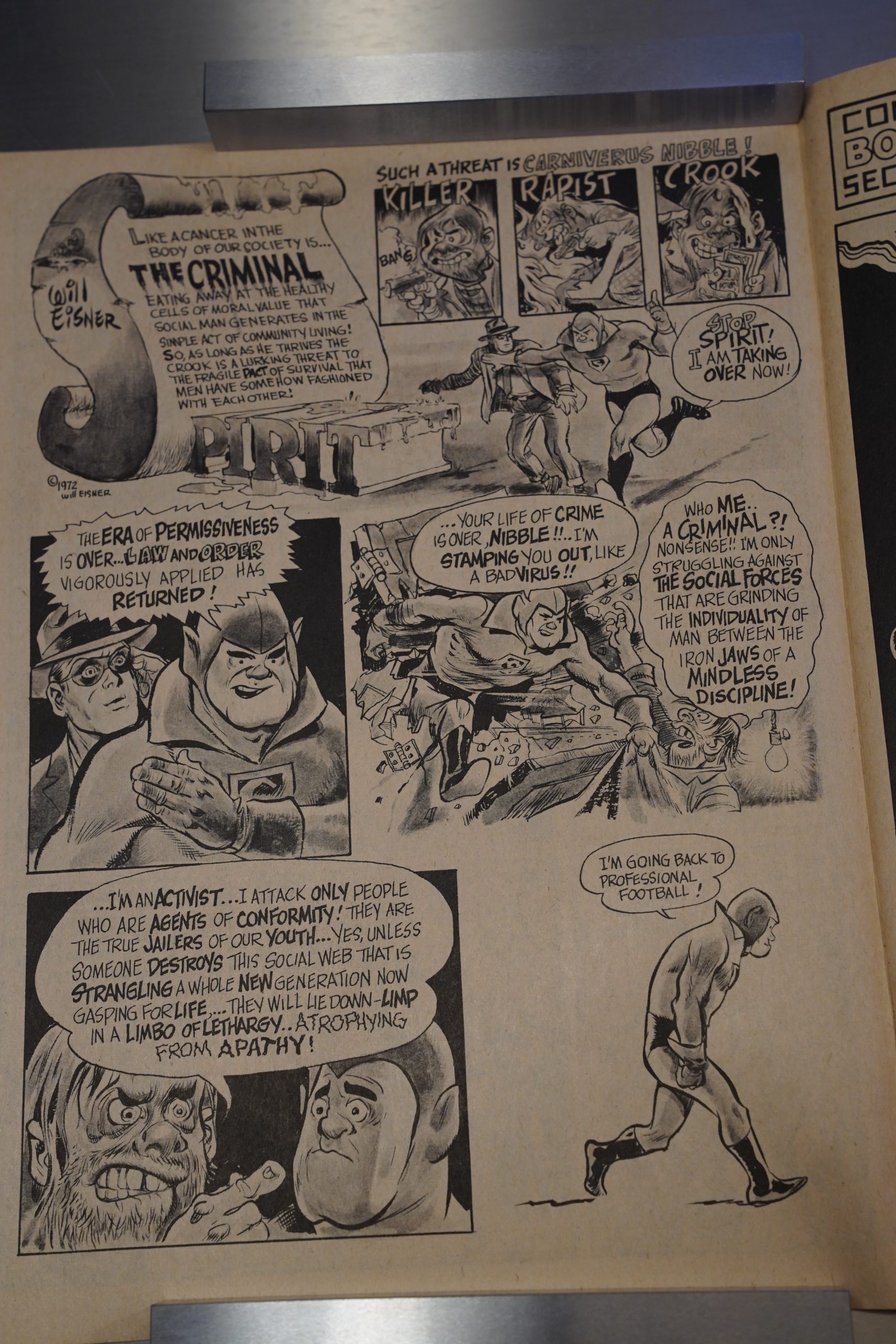 These are 32 pages books, which means that there’s four pages to fill (since there’s four Spirit stories per issue), and Eisner here echoes Horn’s take on super-heroes from the introduction… (Or perhaps the other way around.) 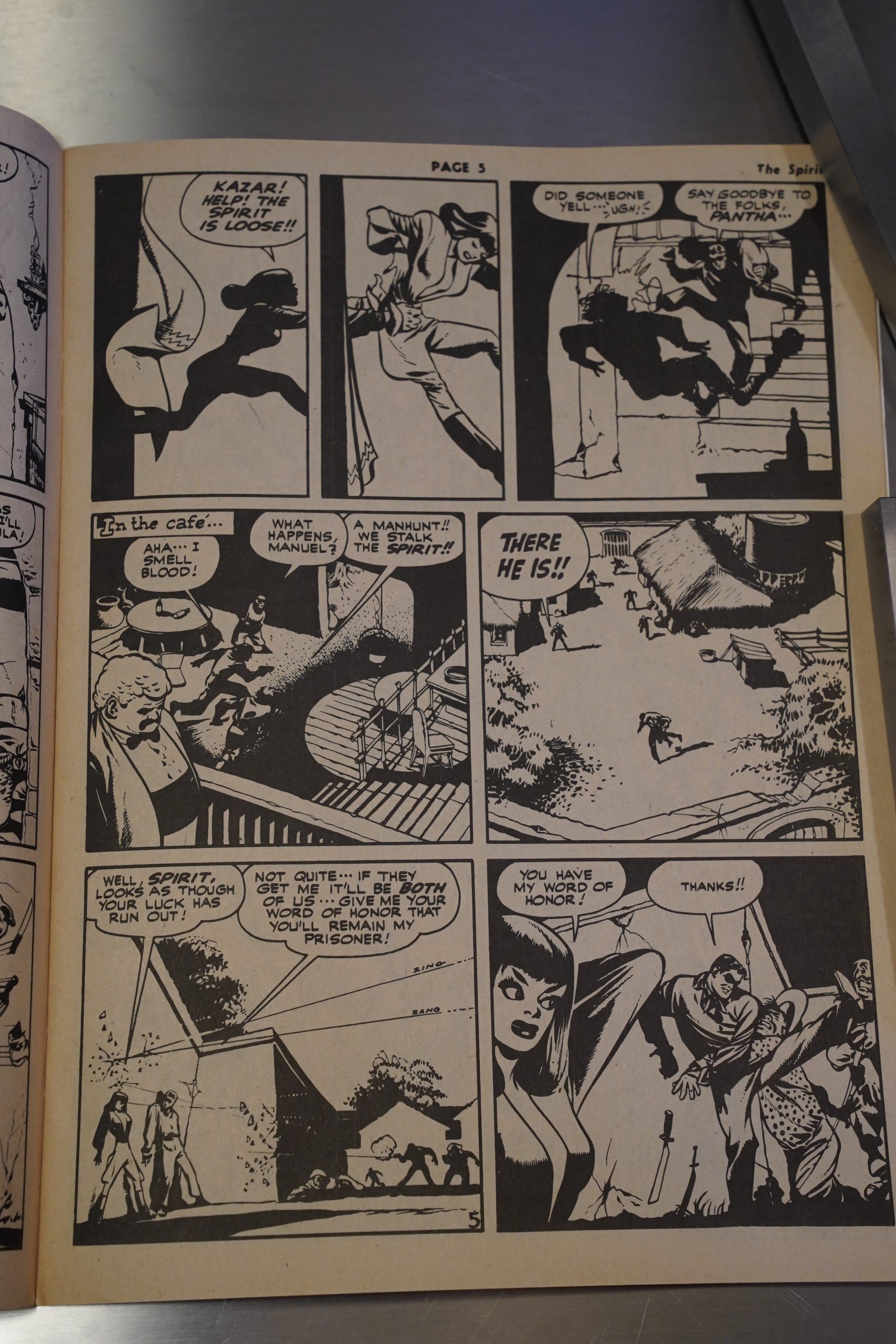 The second story is from half a year later, and is all action, so we’re getting a very varied selection. 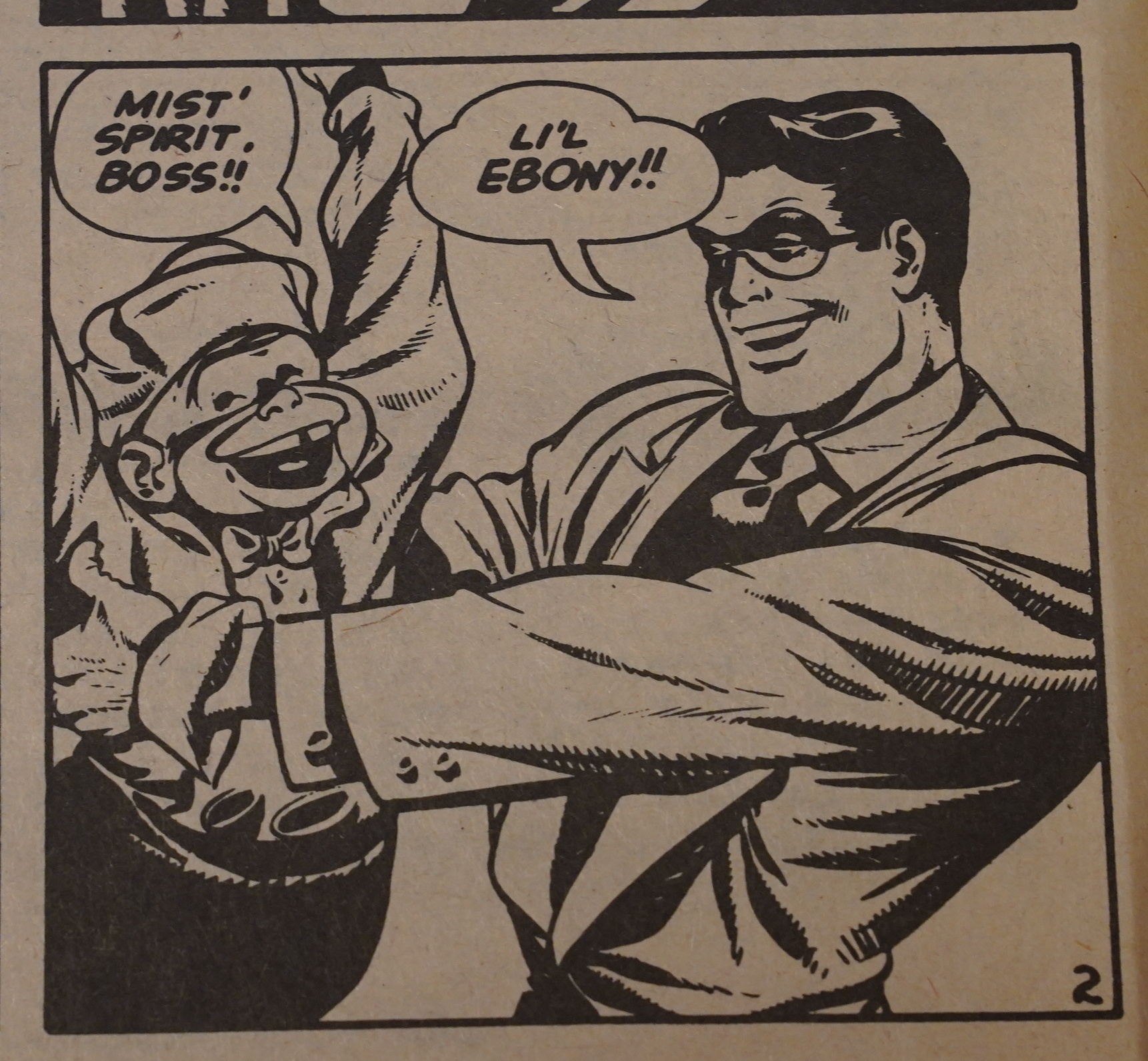 And… Li’l Ebony. Eisner’s been soundly critiqued for the racist way he’s depicted, and he is indeed more cartoonish than most of the other characters. But on the other hand, Eisner should be commended for having such a central non-white character in a mainstream publication. Like, I mean — there’s plenty of other comics from around this time that had absolutely no representation, so some of the critique I’ve read seems a bit unfair to me.

But what do I know. 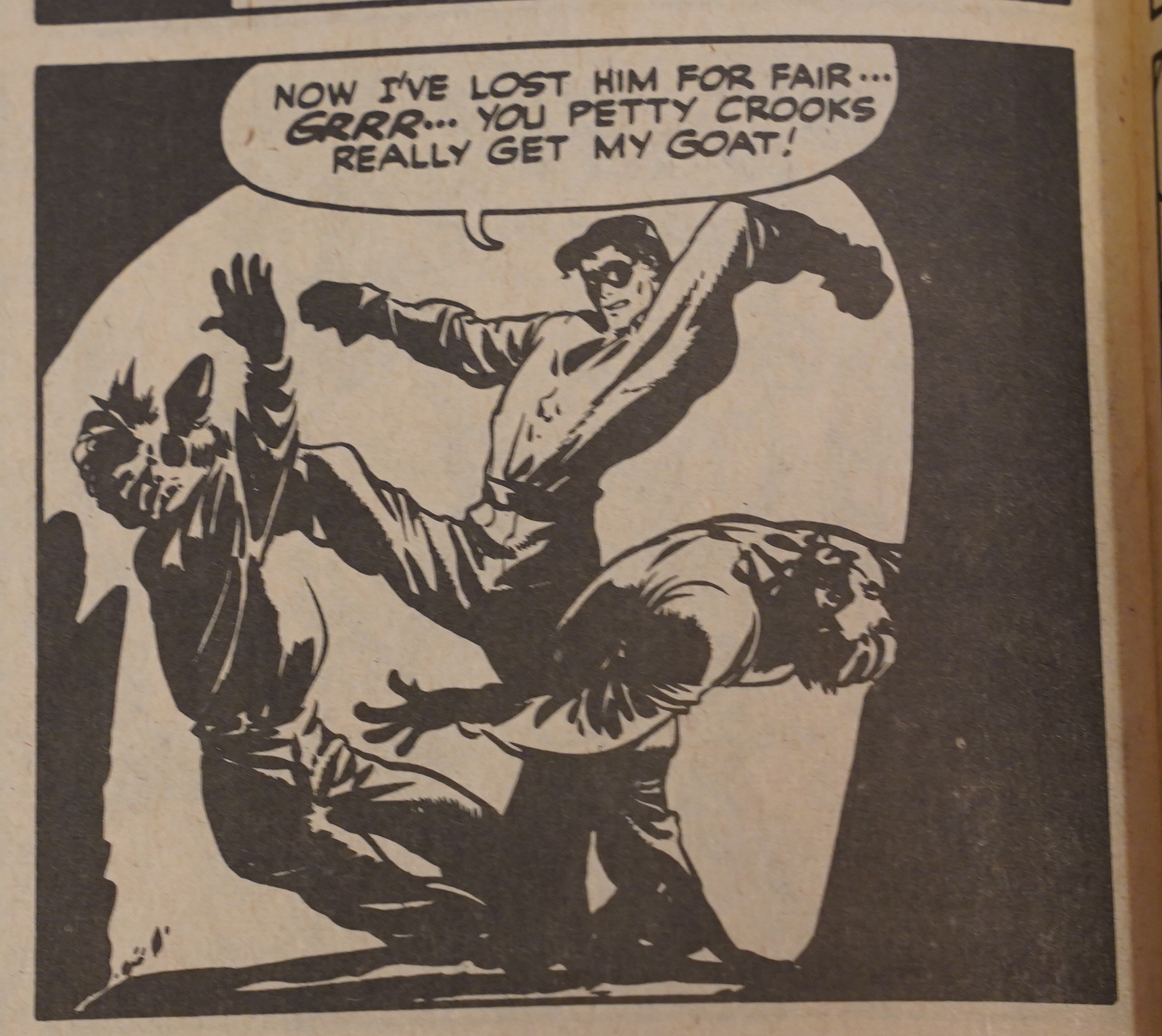 The figures go a bit Bugs Bunny in some of the action scenes, but it’s fun. 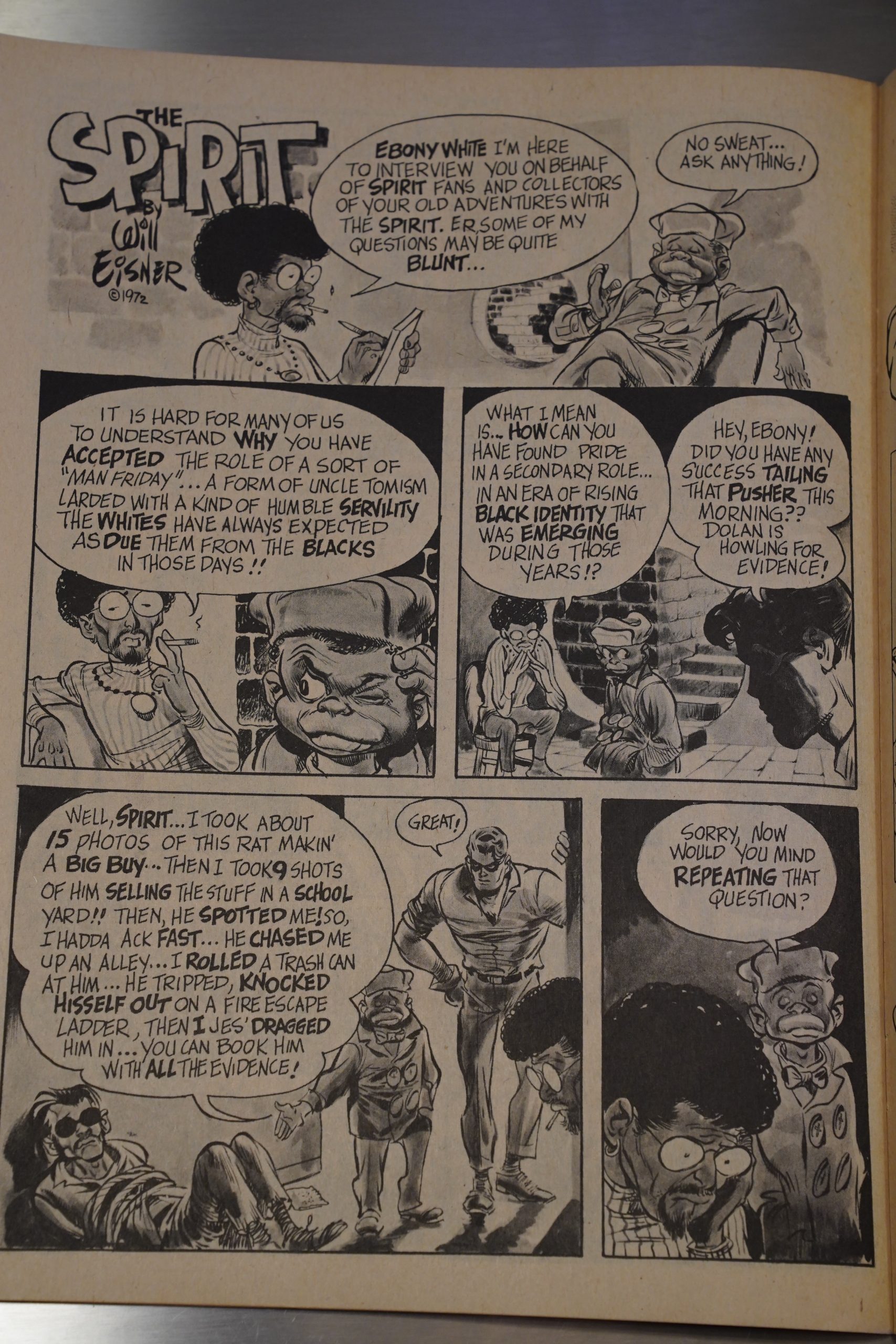 Wow! I didn’t expect this — apparently the critique of Li’l Ebony was already a thing in 1972, so here Eisner responds by basically saying that Li’l Ebony is a character with agency and no simple racist side kick.

The gloating Eisner does in the last panel is pretty… er… offputting, though. He teached them good! 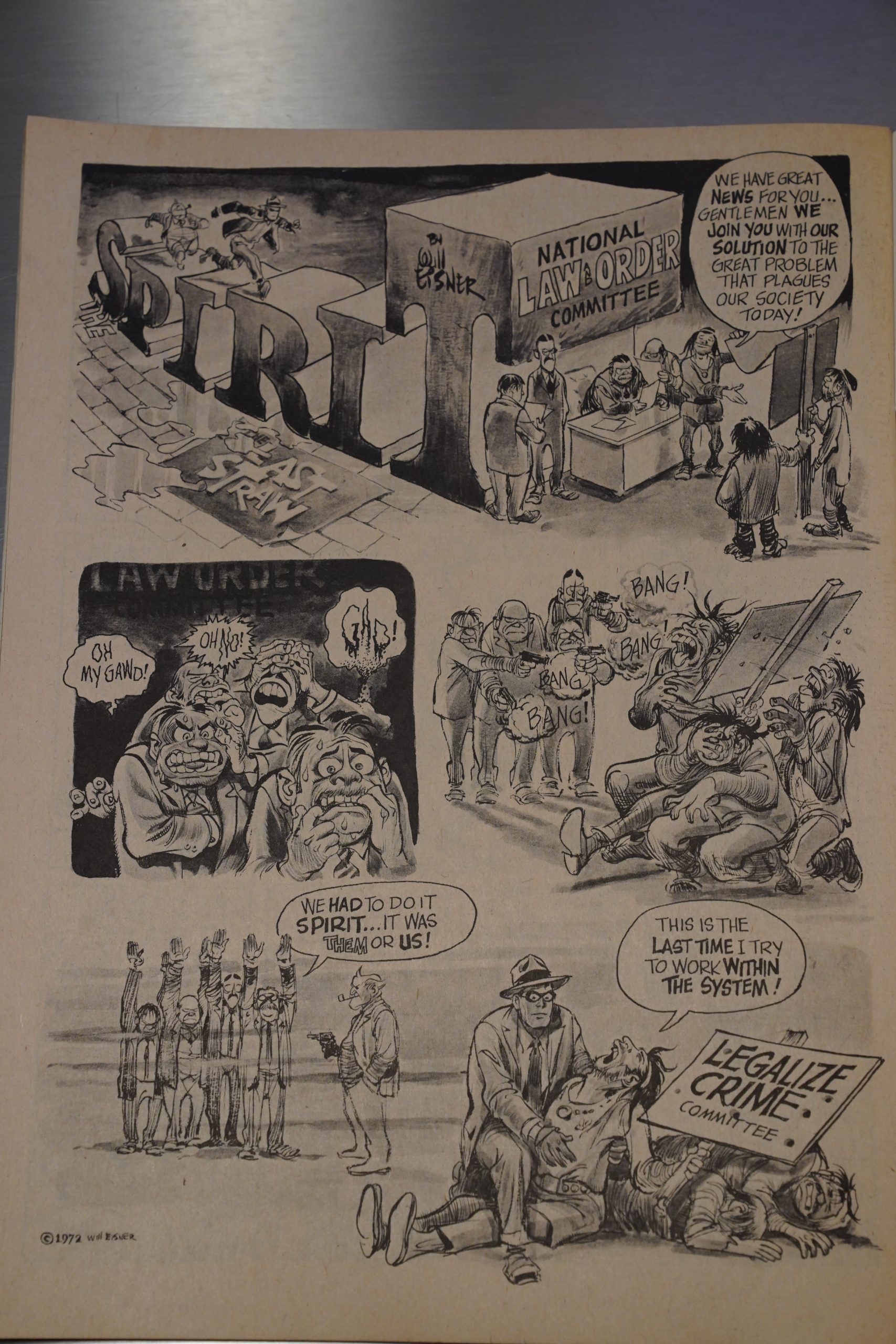 And I’m not quite sure what Eisner is saying here, but he’s definitely trying to get in on common underground tropes. 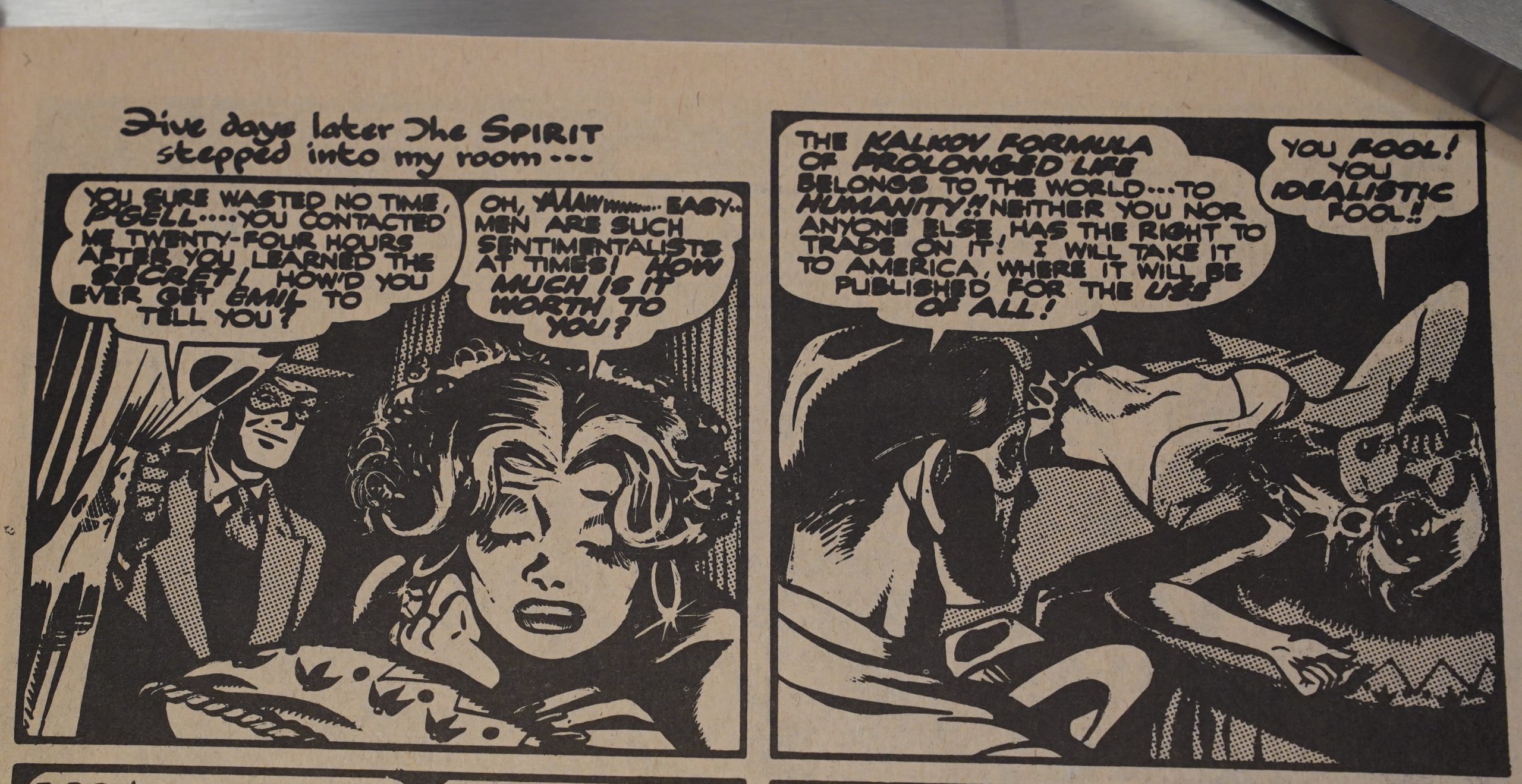 The second issue is all P’Gell stories, and that’s also a pretty good choice — Kitchen (I’m guessing) is picking some solid stuff to introduce a new generation to The Spirit.

The reproduction of some of these pieces is pretty horrible, though. So much ink gain. 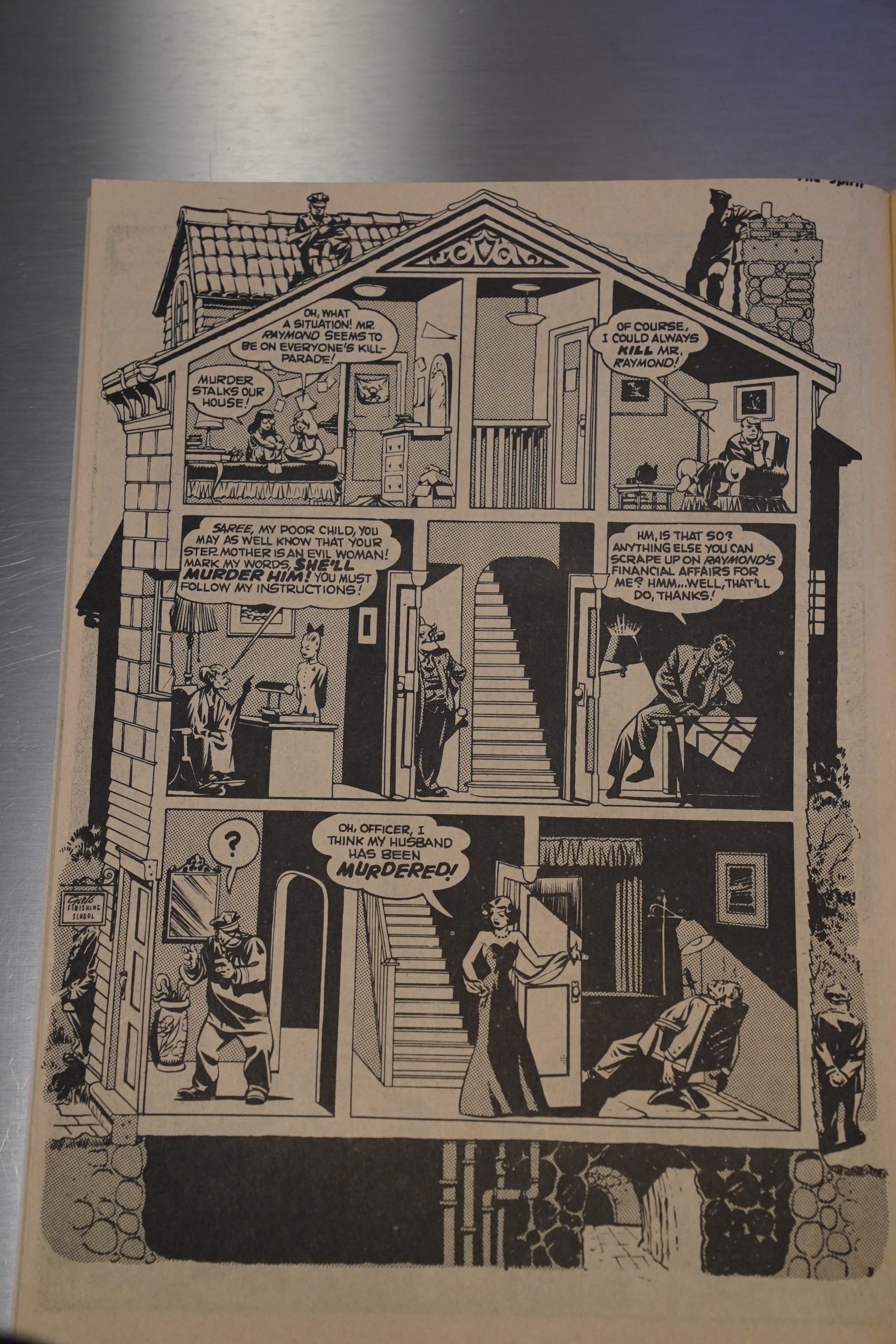 But most of the pieces look fantastic.

And it’s this sort of thing more than anything else that endeared Eisner to a certain generation of comics artists.

It is also really charming how Eisner lets all the characters have their time and victories — The Spirit sometimes comes in to save the day, but P’Gell, for instance, takes care of herself.

Oh, yeah, the casual violence — The Spirit is a lot more brutal than comics usually are. I mean, not in horrific gore or anything, but in things like this: How casually The Spirit kicks that guy in the head. With his hands in his pocket, even. 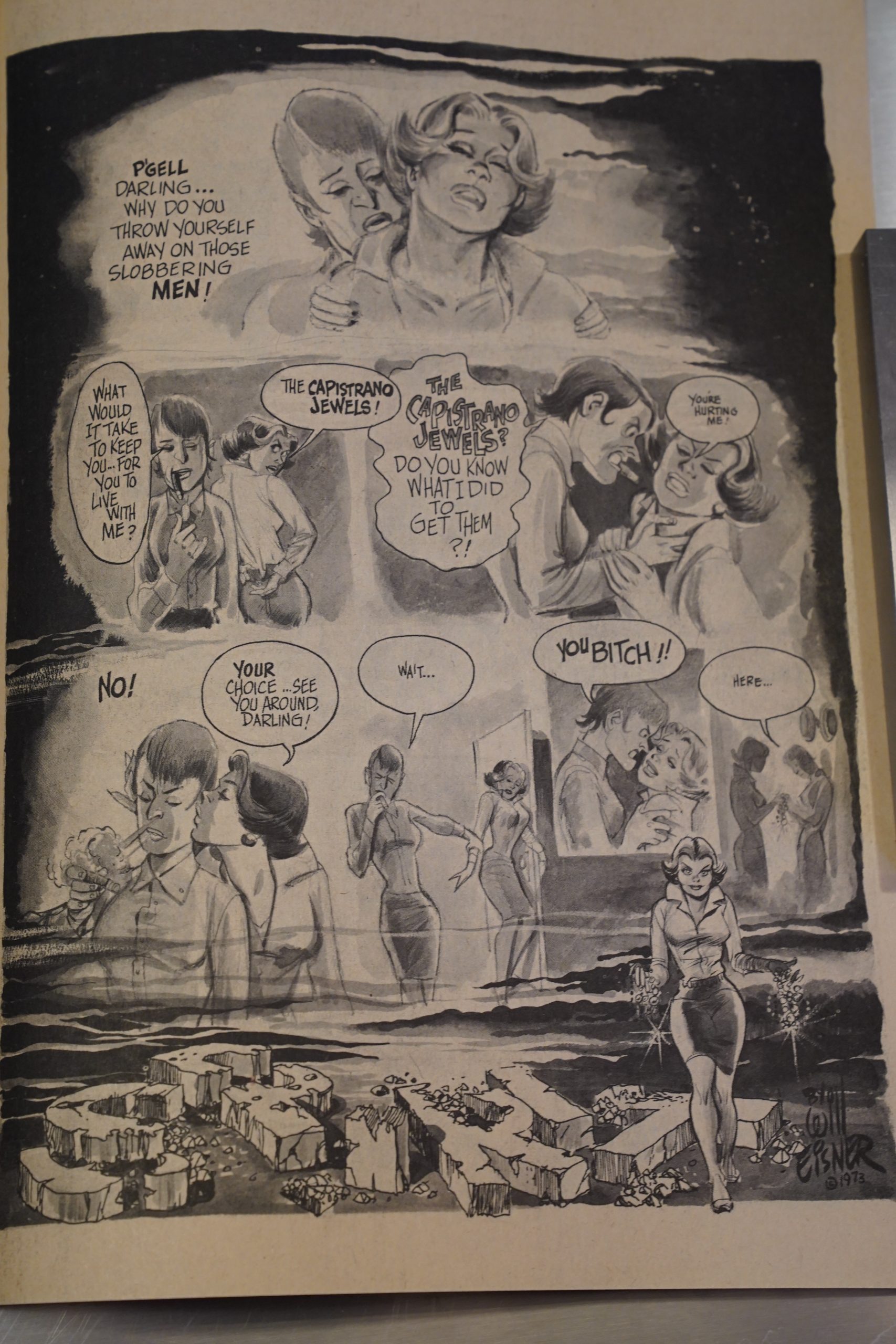 The second issue includes a new four page story where P’Gell is apparently shacked up with a lesbian. P’Gell kills her, as she usually does with her spouses, but it’s… Eisner’s certainly adjusting stuff for this 70s audience.

These two issues were an unexpected success, so Warren made Eisner an offer, and Eisner took The Spirit over there, where The Spirit was reprinted in magazine size for 16 issues, before coming back to Kitchen Sink. Not very… er… loyal of Eisner?

And we’ll come back to the Kitchen Sink issues of that reprint magazine later in this blog series.

This is the twenty-third post in the Entire Kitchen Sink blog series.