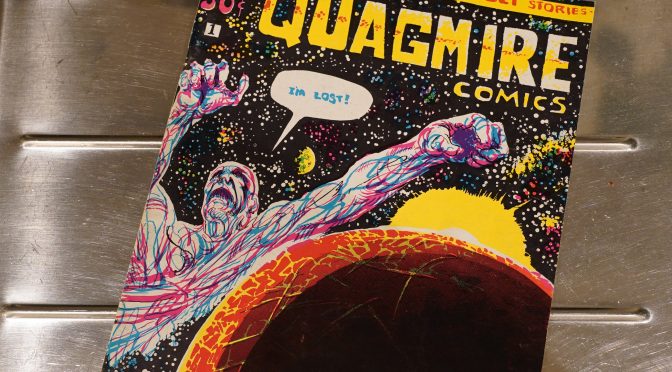 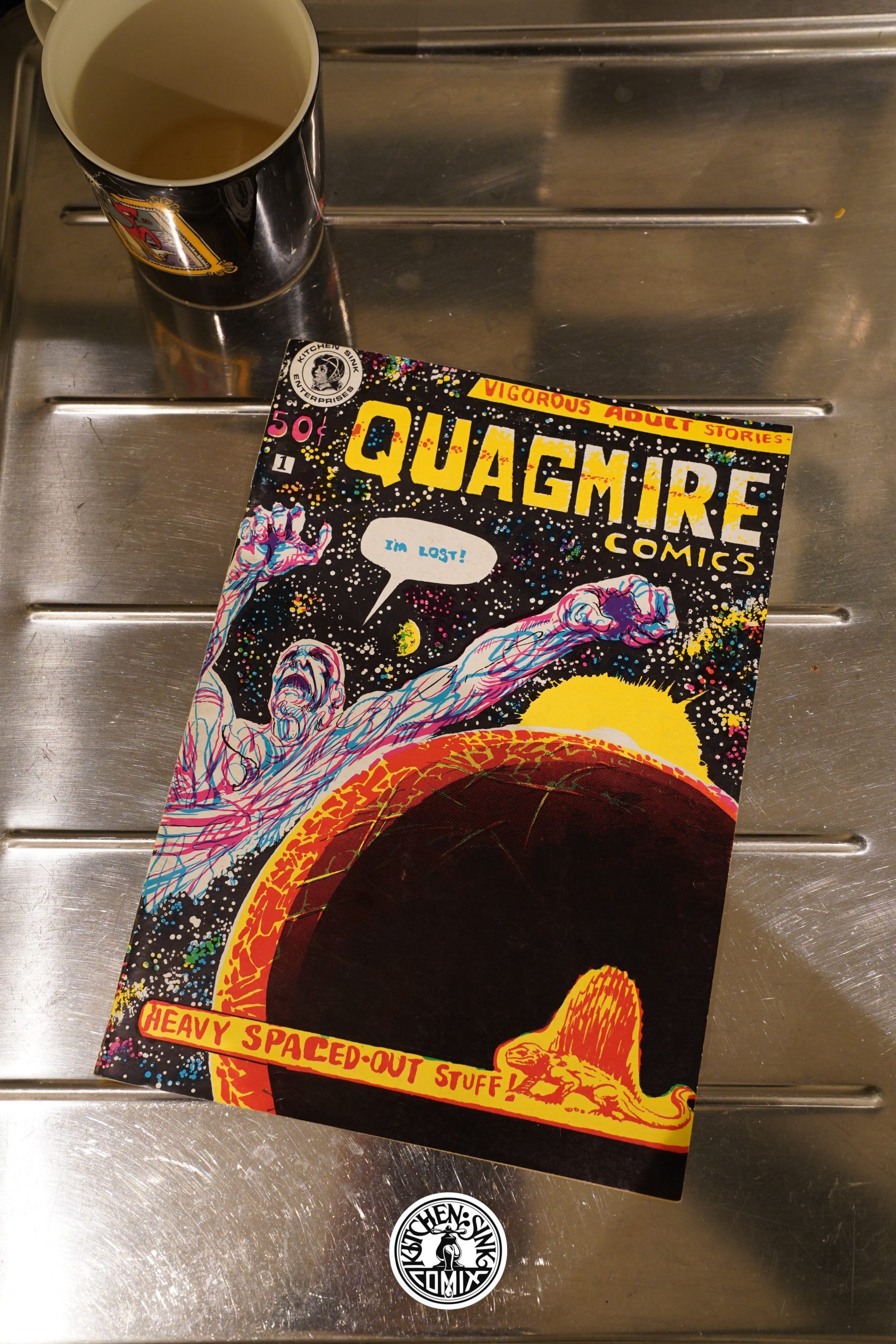 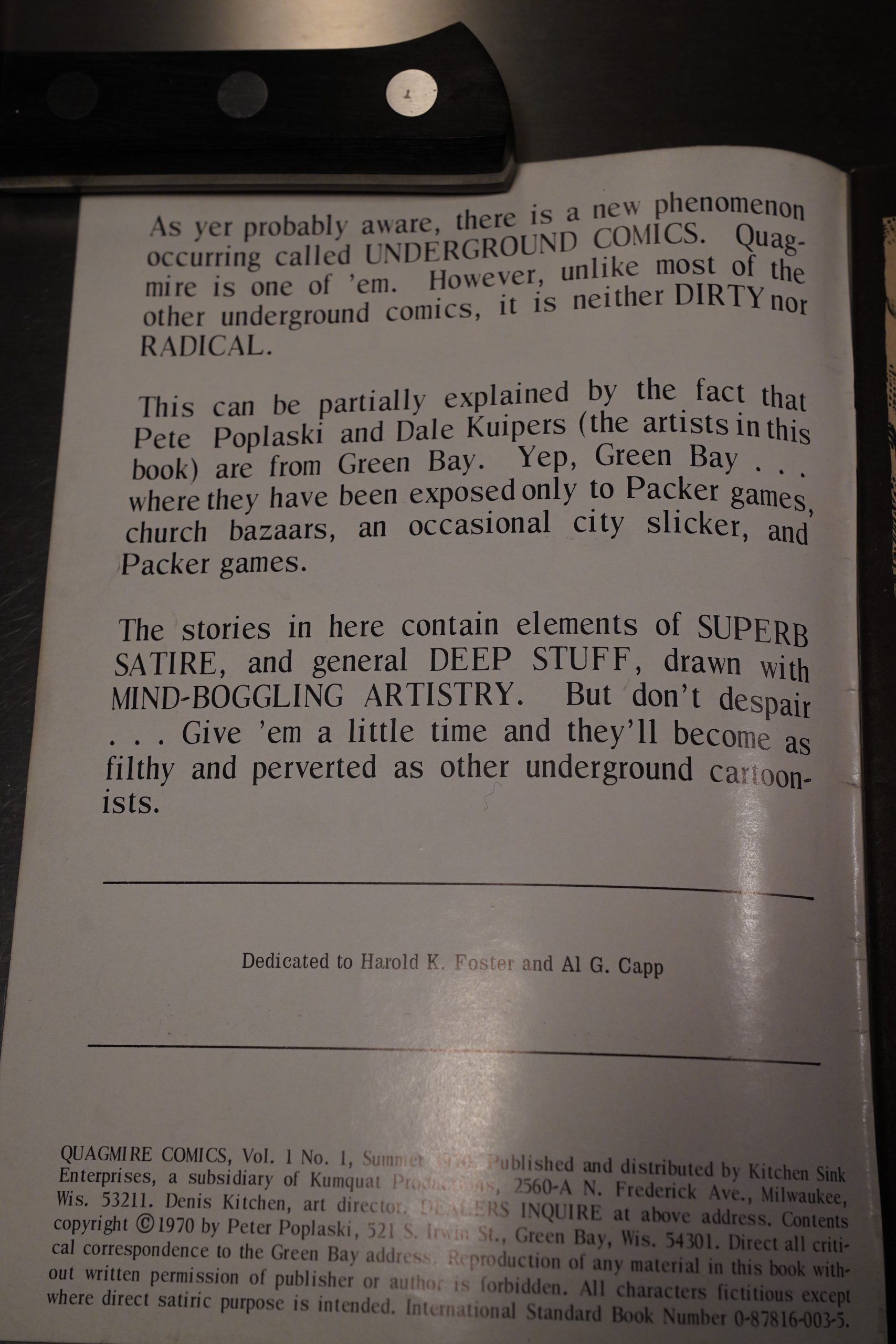 I find it amusing that they have to apologise for not being “DIRTY nor RADICAL”.

And note that Kitchen is still pretending to be a subsidiary of Kumquat Publications — if I understand correctly, they were sort of going for a group-owned communal kind of thing, with a bunch of people being in charge. Kitchen grew tired of that after a while and dropped the Kumquat moniker. 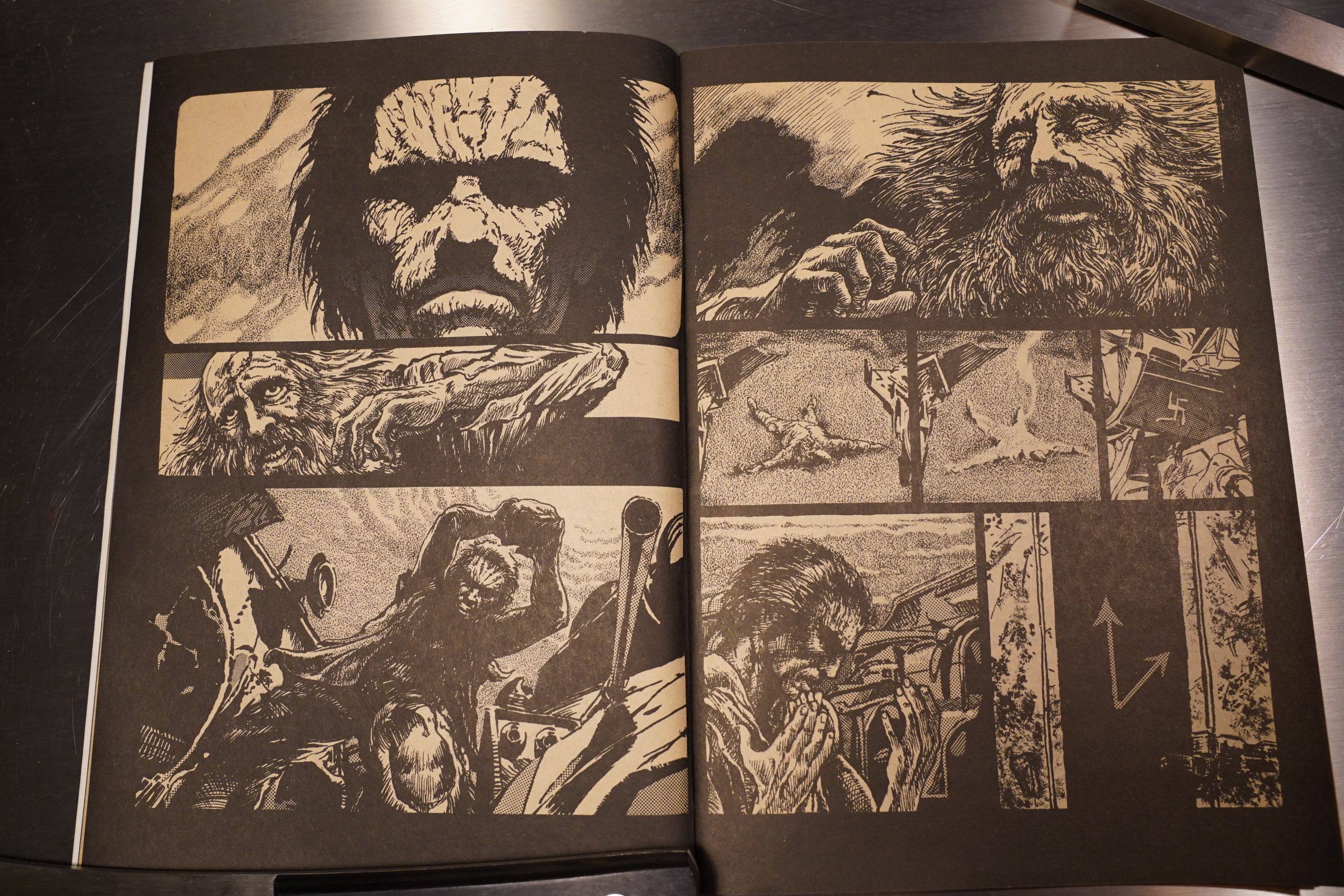 I know Poplaski mostly from his much later work as a designer and colourist, I think? Here he’s doing serious fantasy/sci fi work… and I have no idea what this story is about, but it looks pretty impressive. 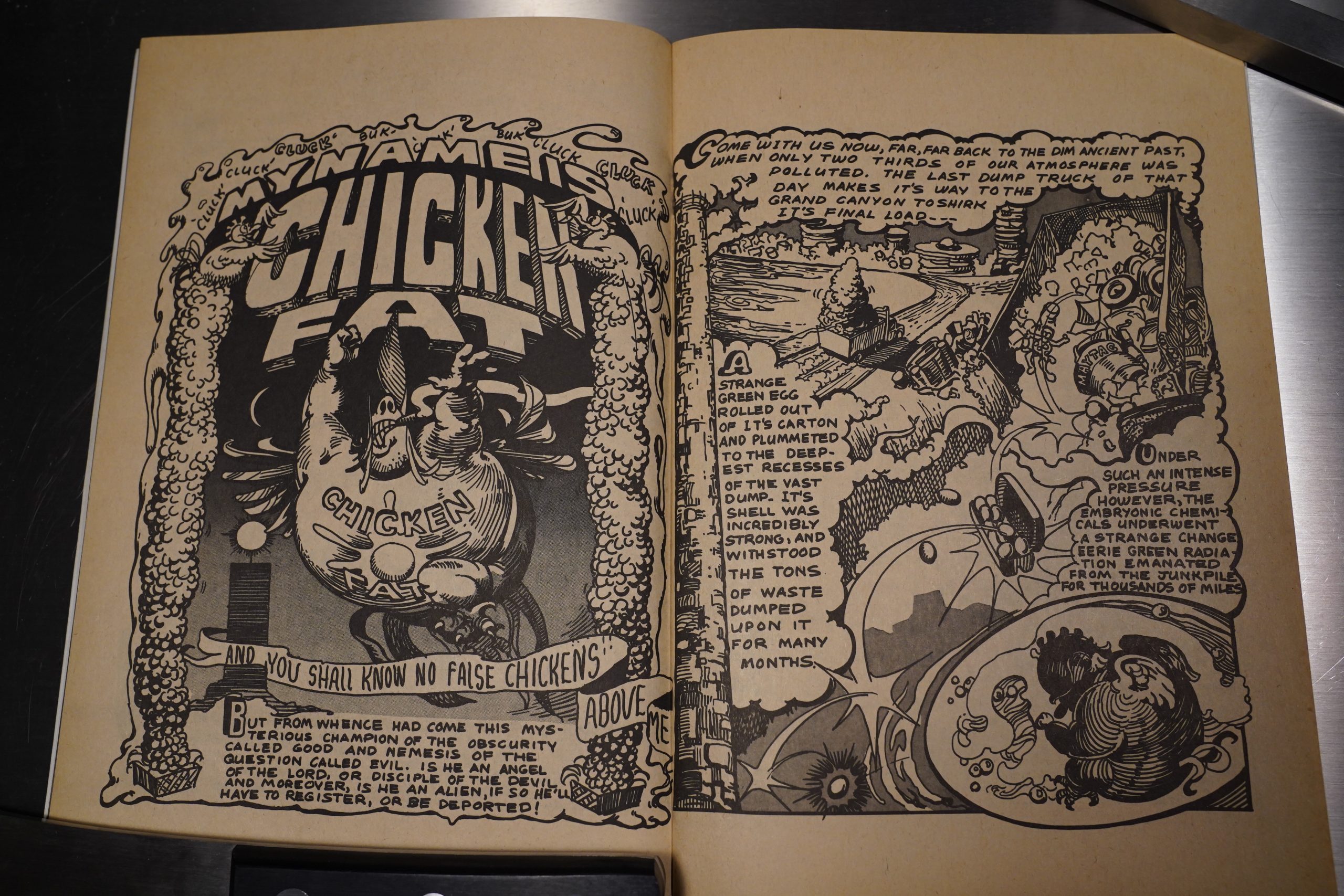 Kuipers does the other half of the book, and like the Poplaski thing, I have absolutely no idea what it’s all about. And it’s a horrible mess, really, and seems to have been drawn for a magazine size ratio. 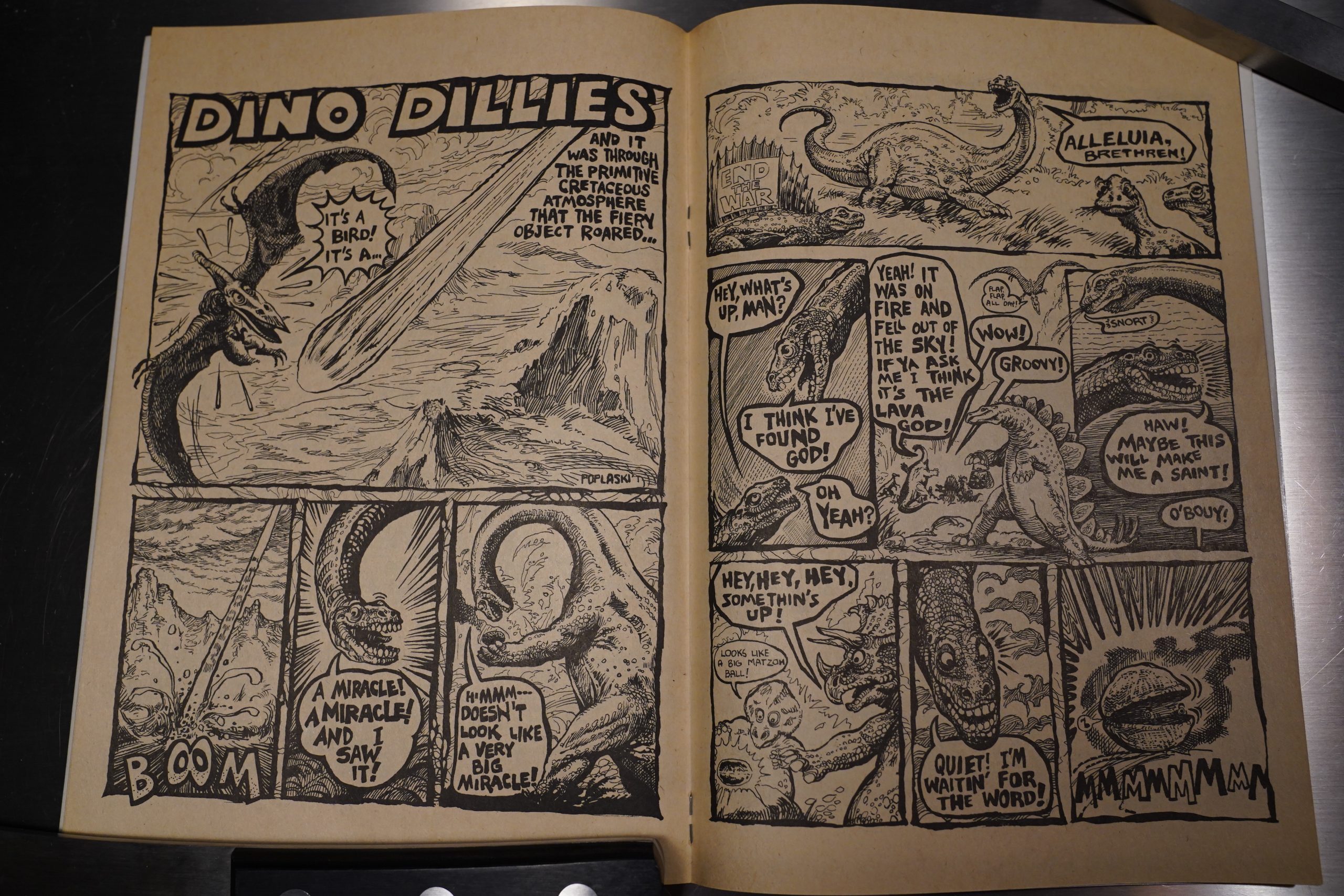 Poplaski does a short (and pretty amusing) thing about dinosaurs… 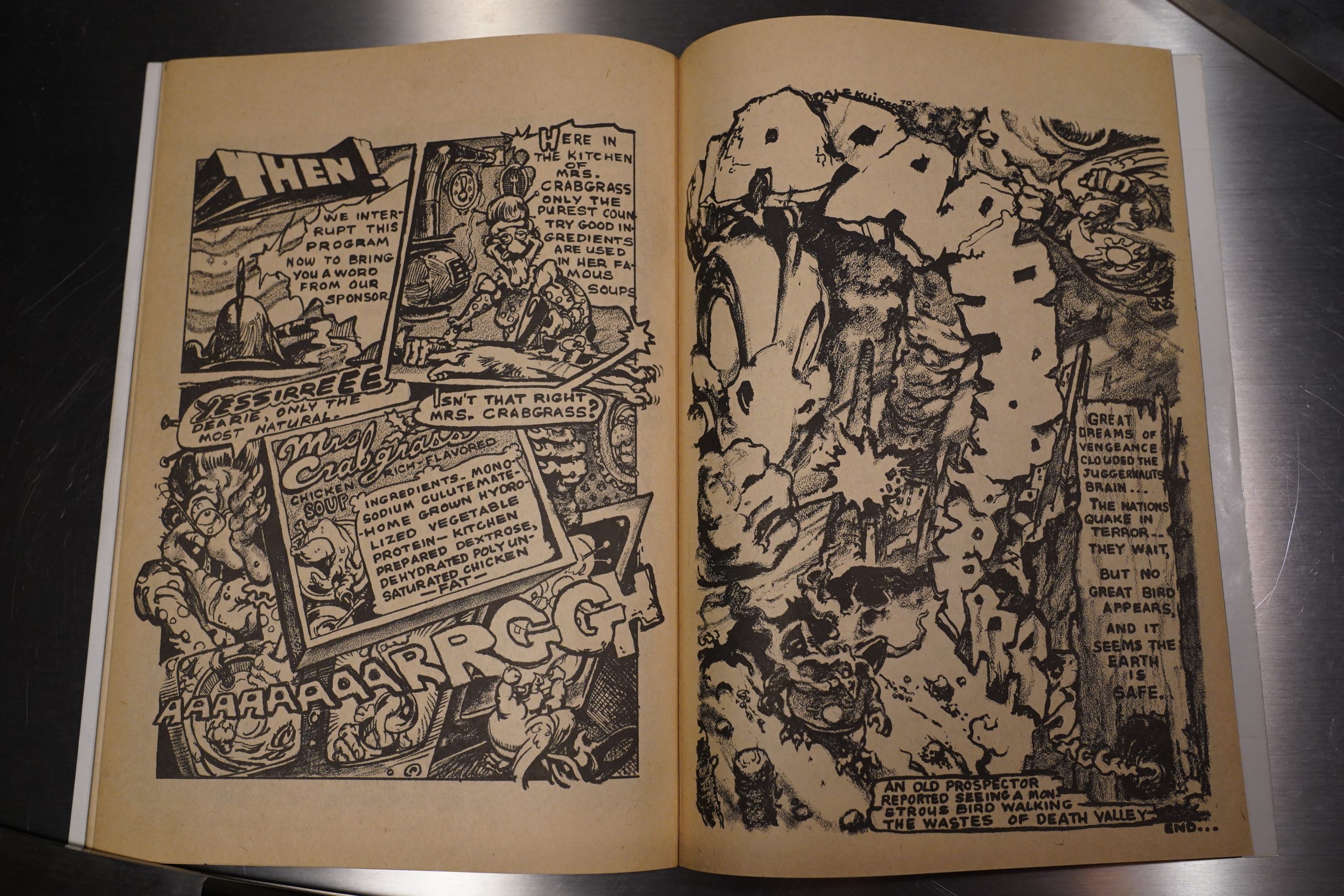 … and Kuipers finishes off his story, in a different aspect ratio and a different rendering style.

As a “will this do?” kind of underground, it… doesn’t really. Like in the much later black and white explosion/implosion in the 80s, a lot of money grabbing publishers put out really crappy stuff during the first couple of Underground Comix years, but I really thought that Kitchen had a higher standard.

To be clear, Quagmire’s mediocre score isn’t due to the artistic talent of the creators, because the artwork is about 50 times better than the really shitty undergrounds that were published in the early ’70s. My issue with Quagmire is that the storytelling is more muddled and less satisfying than in any of the aforementioned sci-fi comics.

Quagmire Comics, which Denis Kitchen candidly admitted “was a dud,” had the potential to be much more and had talented creators behind it, but the lack of fulfillment of that potential makes me less generous in my assessment of it than I would be of a comic book that was destined to be shitty from its birth.

This is the fifth post in the Entire Kitchen Sink blog series.