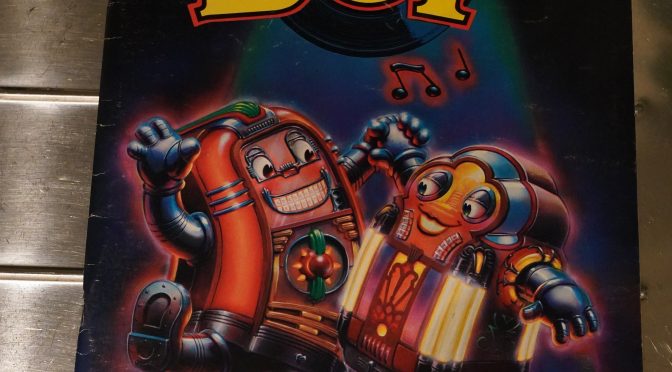 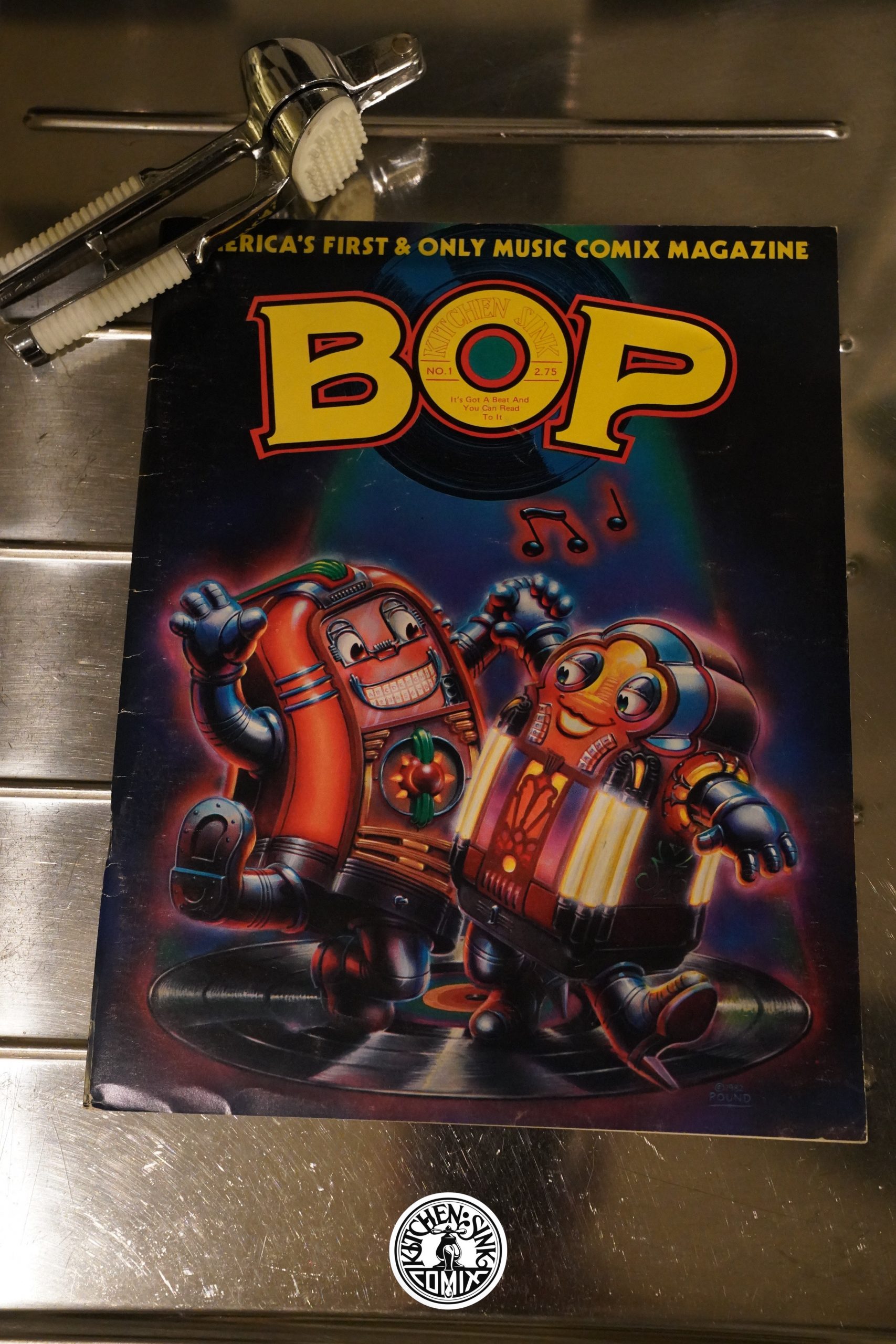 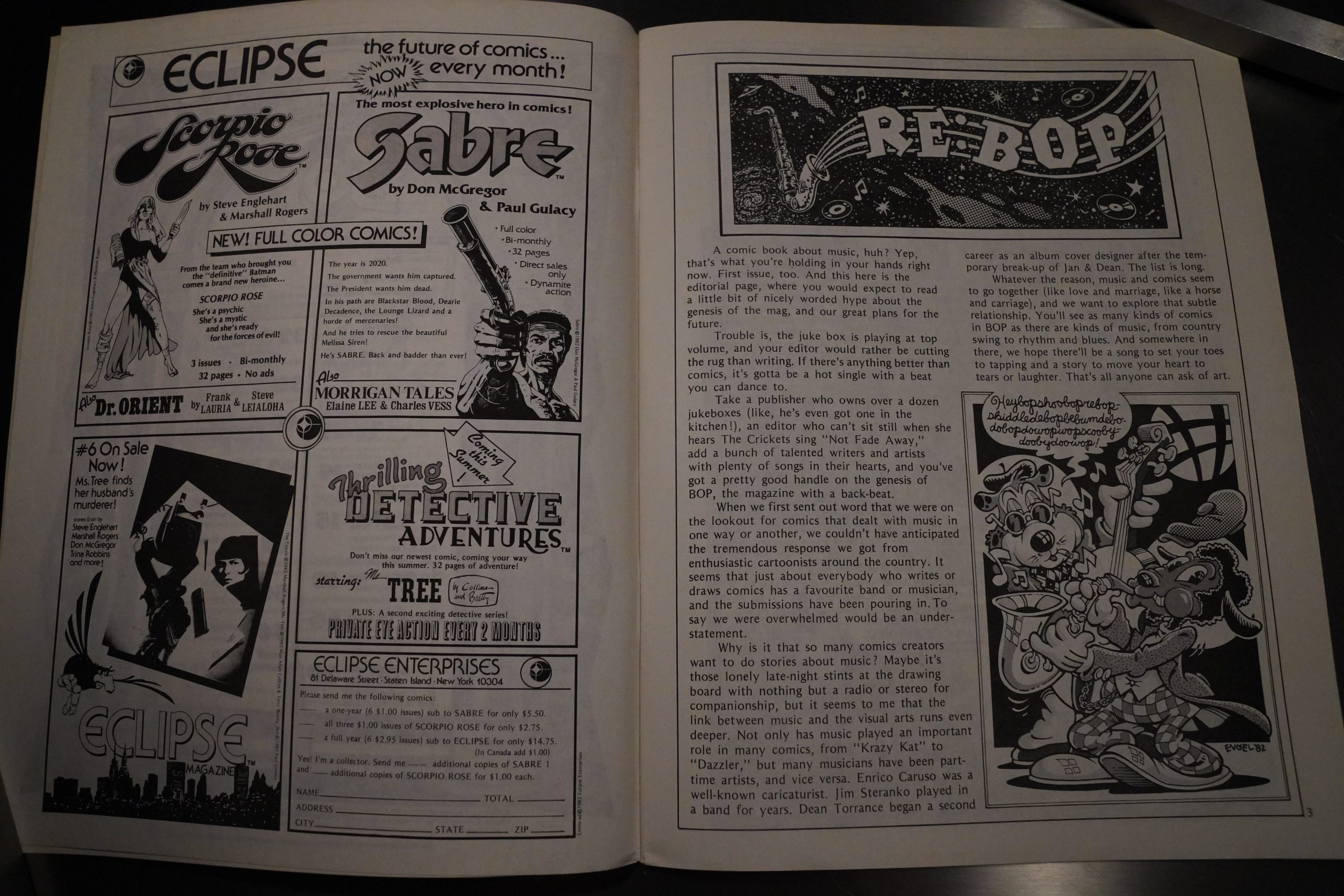 Well, this is an odd one. During the first few years of the 80s, Kitchen Sink basically published Will Eisner stuff and not a lot else. This was launched as a new ongoing magazine series, and I guess it makes sense one some levels. But… it’s a comics/music magazine about… oldee tymey music. I know comics fans are often really conservative, but c’mon. 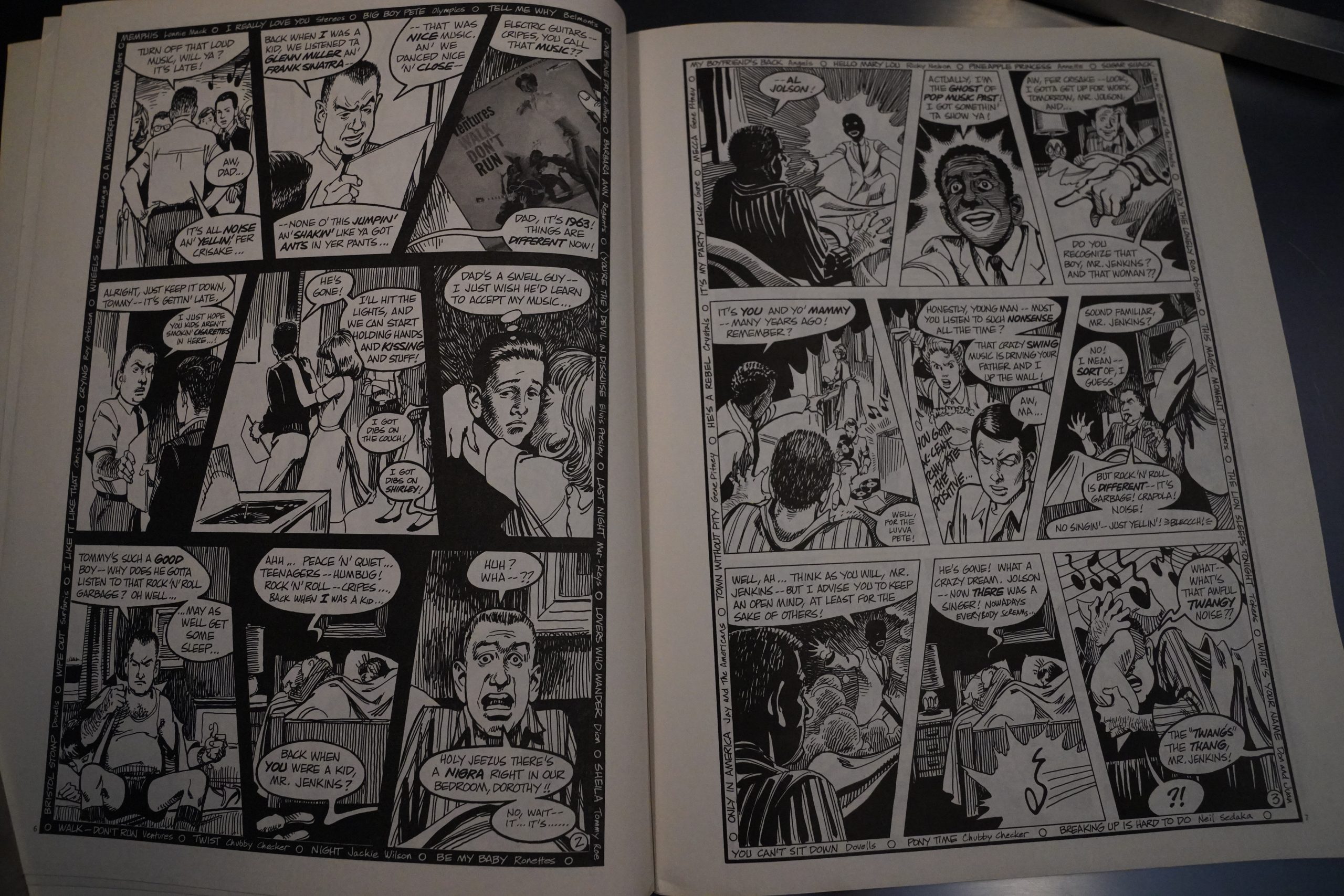 Marc Hempel does a take on A Christmas Carol, but about how old people always hate on whatever music’s new. 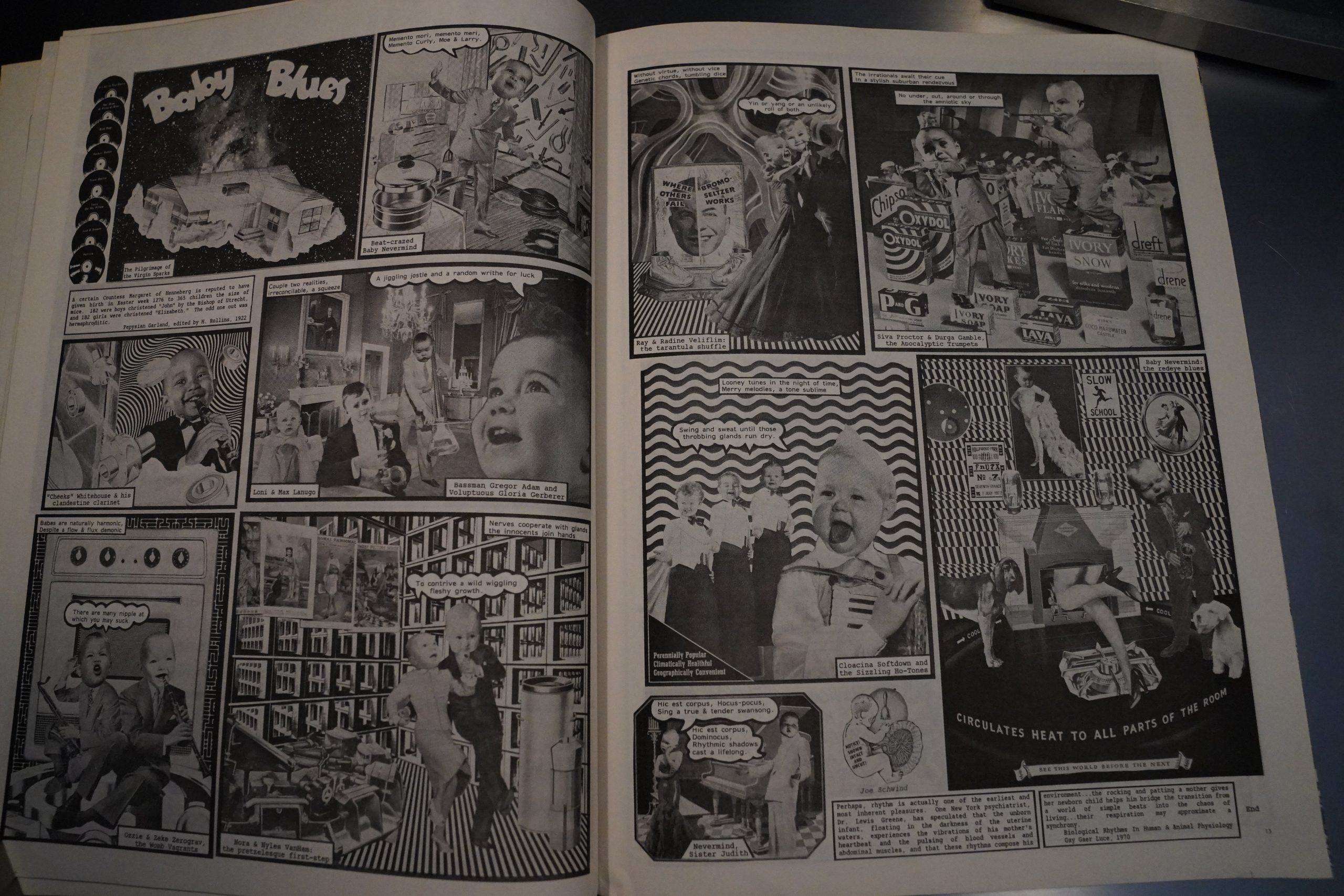 Joe Schwind does this… 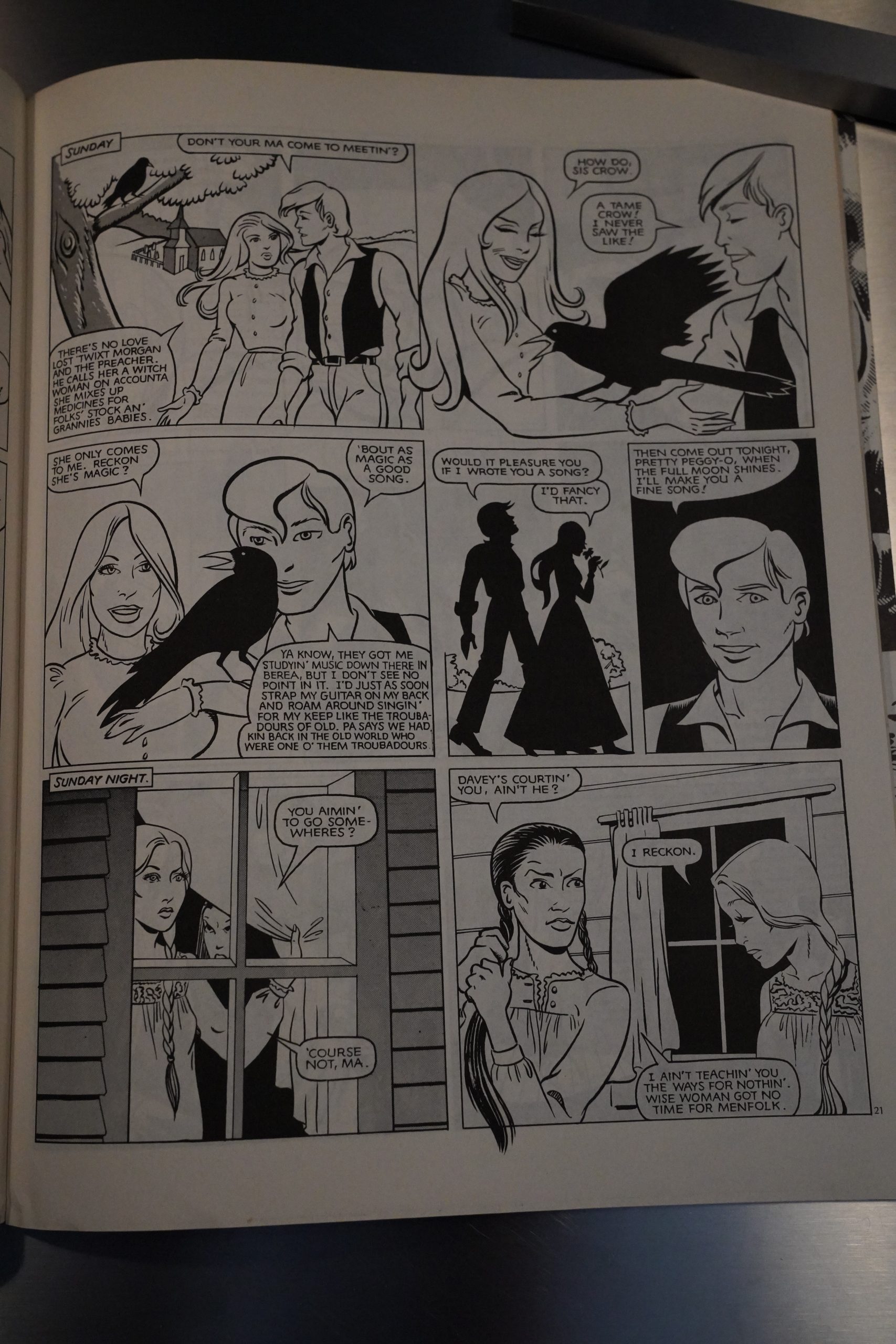 … but the most successful piece in the book is Trina Robbins’ take on East Virginia Blues. 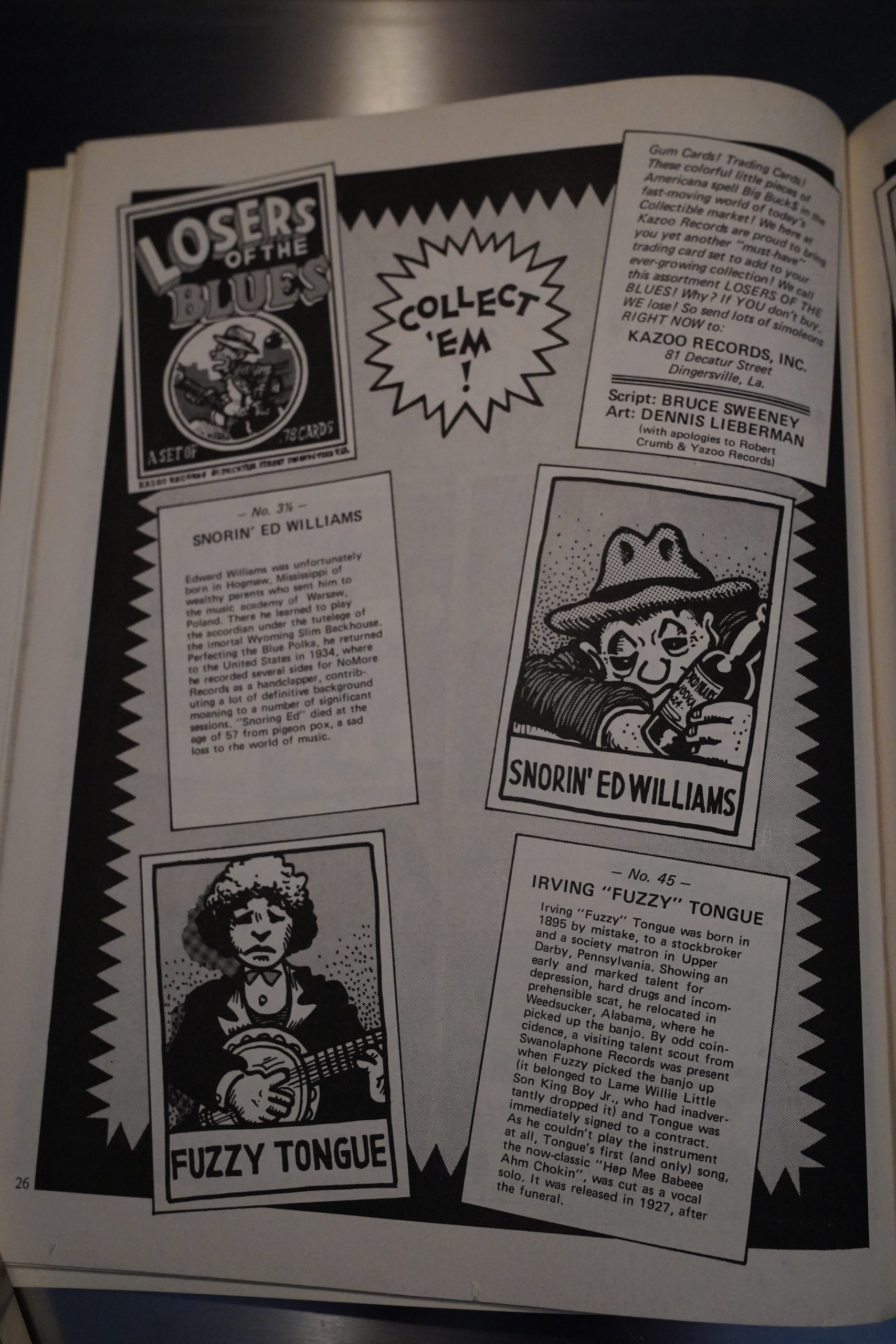 OK, this parody of Crumb’s Heroes of the Blues is pretty much on point. 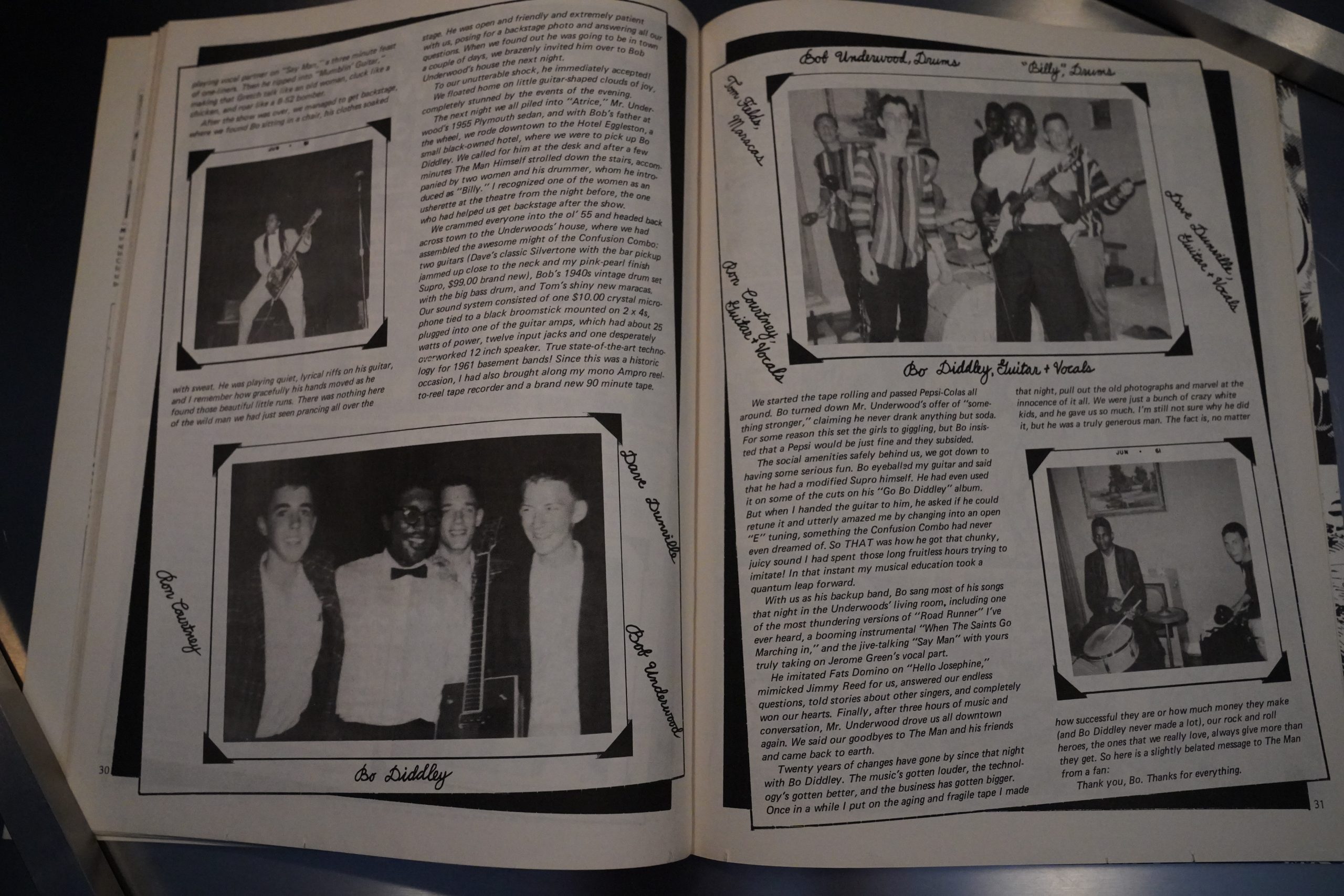 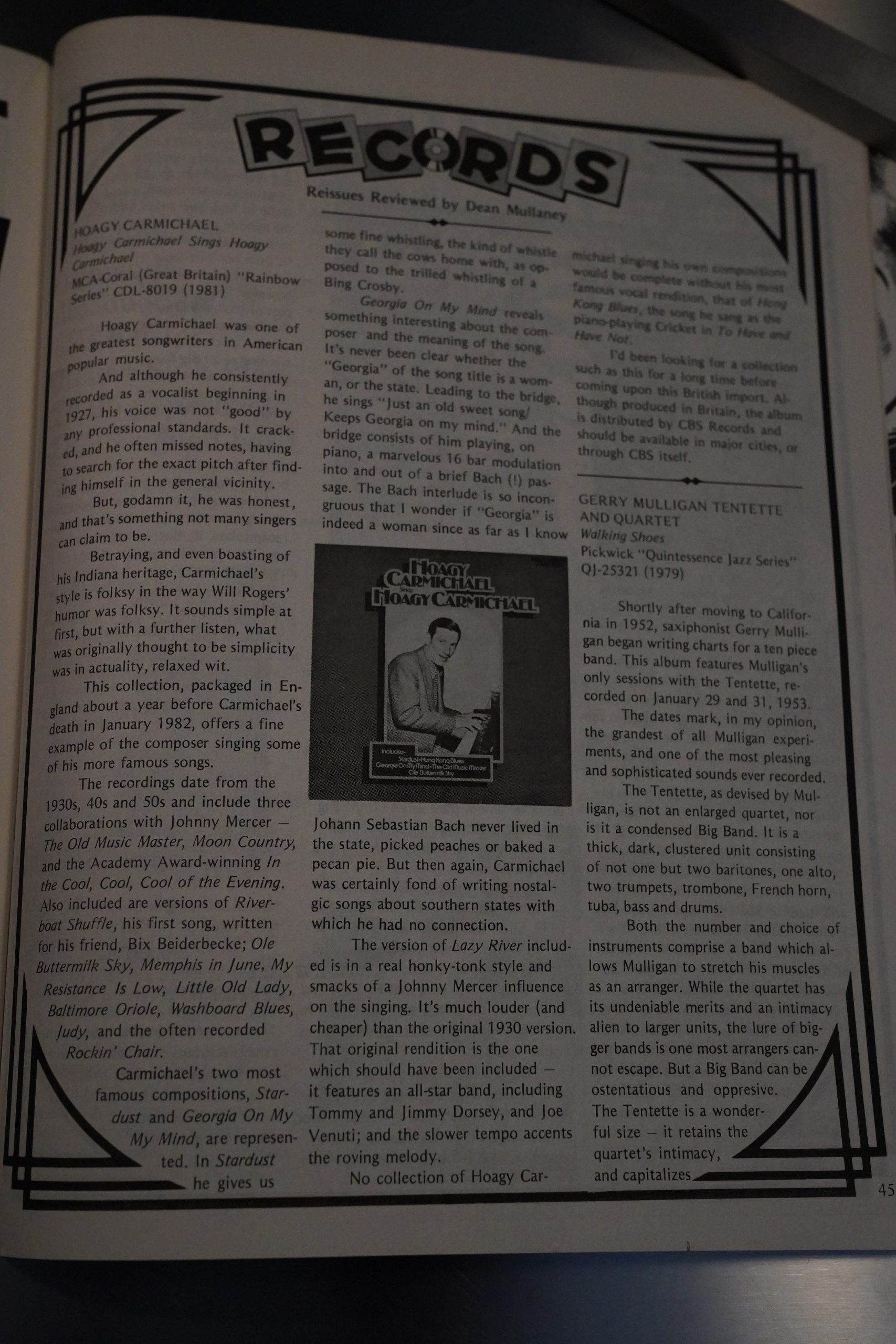 And reviews of (old) music. Hm, why didn’t Eclipse publish this instead? Yronwode and Mullaney are both Eclipse people… 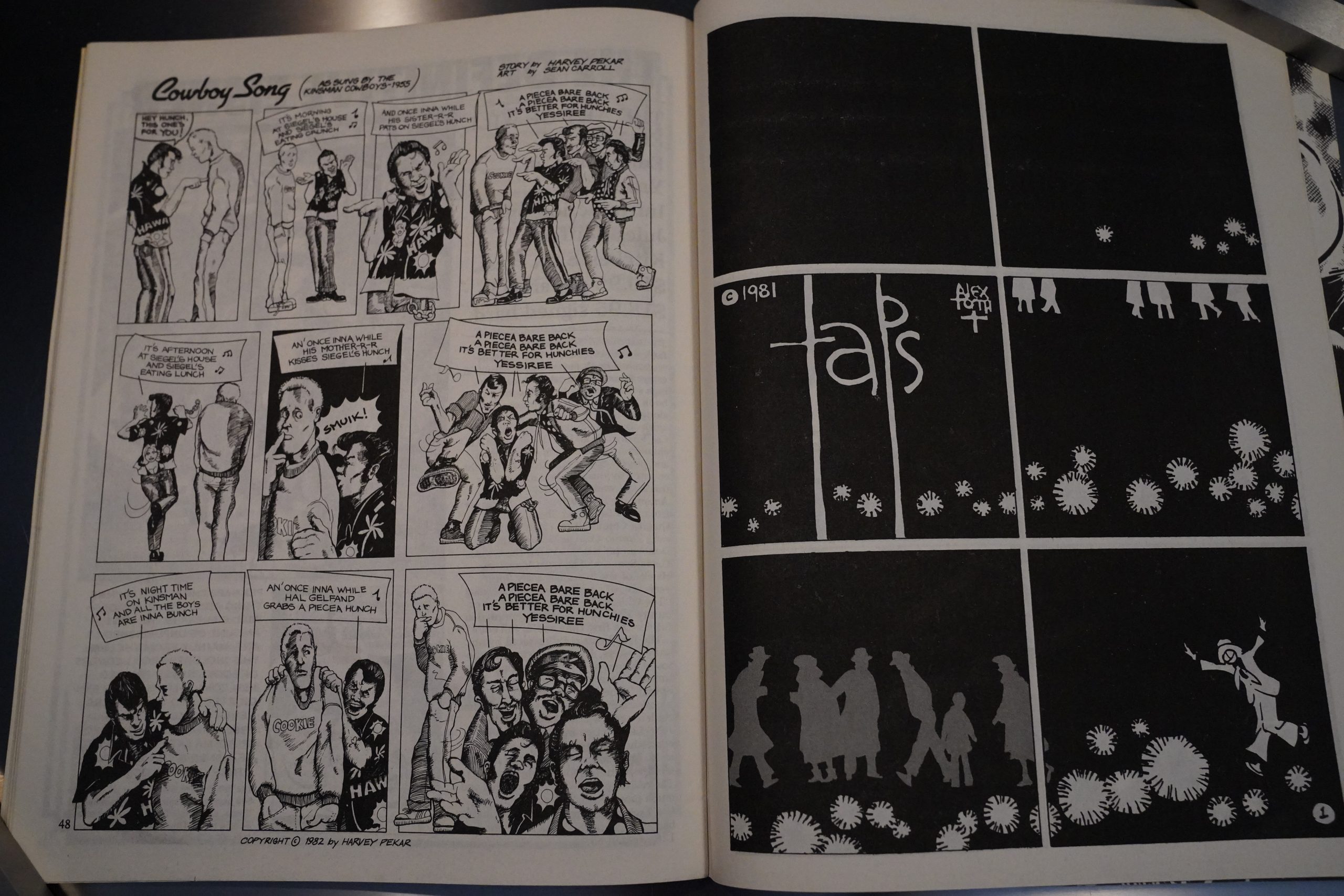 Harvey Pekar shows up with a suitably absurd thing, and Alex Toth takes us dancing. Well, actually, the Toth thing is pretty good, too.

I guess the magazine is kinda OK, but it’s just rather confusing as a project. I’m not surprised at all that no further issues happened, though.

On the other hand, Denis Kitchen’s Bop
is fully professional in its production and
the work of dedicated and talented people
—but in its own way falls equally short of
the mark.
Bop was a fine idea—a black-and-white
“music comix magazine” which sought to
bridge the gap between the underground
comix and the music many underground
comix artists listen to while they work, in a
format suftciently “above ground” to sell
outside the rapidly disappearing head-
shops.
Alas, there was also a gap between the
basic idea and its realization—which may
have contributed to Bop’s disappointing
sales as well as its basic failure to fulfill its
promises. Thus Bop #1 was both a•first and
a last issue, and its potential has been
stillborn. That’s a pity; I had hoped when I
first read it that it would improve with sub-
sequent issues.
Bop is a handsome magazine. John
Pound’s airbrushed cover is a pure delight.
Sadly , nothing inside the magazine, despite
Bop’s overall graphic excellence, comes
anywhere close to Pound’s cover painting
in vigor, wit, or musical animation. Why?
I’m not sure. The easy answer would be
that editor Cat Yronwode set her sights
too low, and accepted too many pieces that
failed to imbue themselves with the spirit
needed (no pun intended). But perhaps she
had no choice; perhaps this result was in-
evitable. It’s possible that the melding of
comix and music she (and l) sought was im-
possible to achieve. I’m not sure. Looking
back over the years of underground comix
I can think of few examples that meet the
necessary requirements.

When I edited the first Rock issue of
Heavy Metal I had a number of French
pieces (published in two Rock Special issues
Of Metal Hurlant) to draw upon, but I used
only a few. The French love of ’50s rock
and roll and what they perceived to be the
American culture of that time produced a
few brilliant pieces and a lot of garbage.
Among the American artists I turned to
were Spain, whose Trashman had been a
fixture among ’60s pnderground strips, and
who rivals Wilson for rock-energy in his
work. But that issue of HM was not edited
from the same premises used for Bop; I
wanted pieces which told stories or ern-
bodied rhythm, or in some way evoked the
rock experience, which is a far narrower
focus than Bop’s, despite superficial
similarities between the two magazines’
approaches.
Bop is far more academic in its approach
to music. It is too often didactic, choosing
to explain music rather than sharing its ex-
perience. And its feel is anemic, as though
the life-blood of music—all music—has
been siphoned off first, leaving a relatively
lifeless body.

It’s an irony that a man like
Toth, who has enjoyed such a long career
•in the professional comics, turned in the
best piece of “comix” in Bop, but perhaps
that offers yet another explanation for
failure to realize its potential.
The rest of Bop—perhaps half the total
issue—is not comics Or ‘ ‘comix,” but is
typeset text with spot illos, and the text
material is basically music-fanzine material,
some if it quite good, but all of it essentially
explanatory and not evocative—more
didacticism.
The overall impression I’m left with is
that Bop lacks the essential aliveness of
music, and isn’t great shakes as comics
either. Pound’s cover and Toth’s panto-
mime are only real successes and they
just don’t carry the issue.
That’s a genuine pity, because the obvi-
ous time, money, and care that went into
Bop should have yielded better results.
Denis Kitchen deserves applause for not
only trying Bop but for his almost single-
handed efforts to keep a dying industry—
underground comics—alive. His failure to
make a success of Bop will inevitably be
reflected elsewhere in the shrinking
Kitchen Sink empire and we will all (along
with Denis) be the poorer for it.

This is the sixty-third post in the Entire Kitchen Sink blog series.