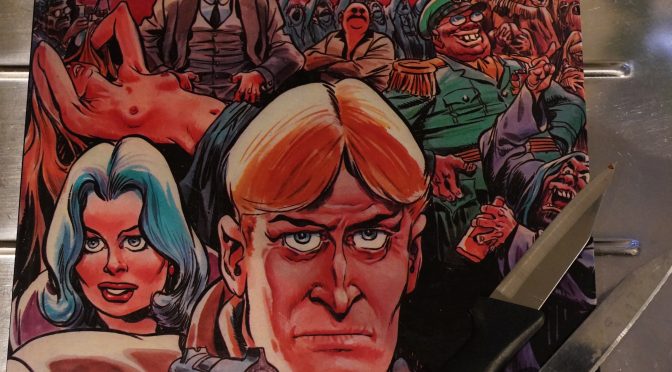 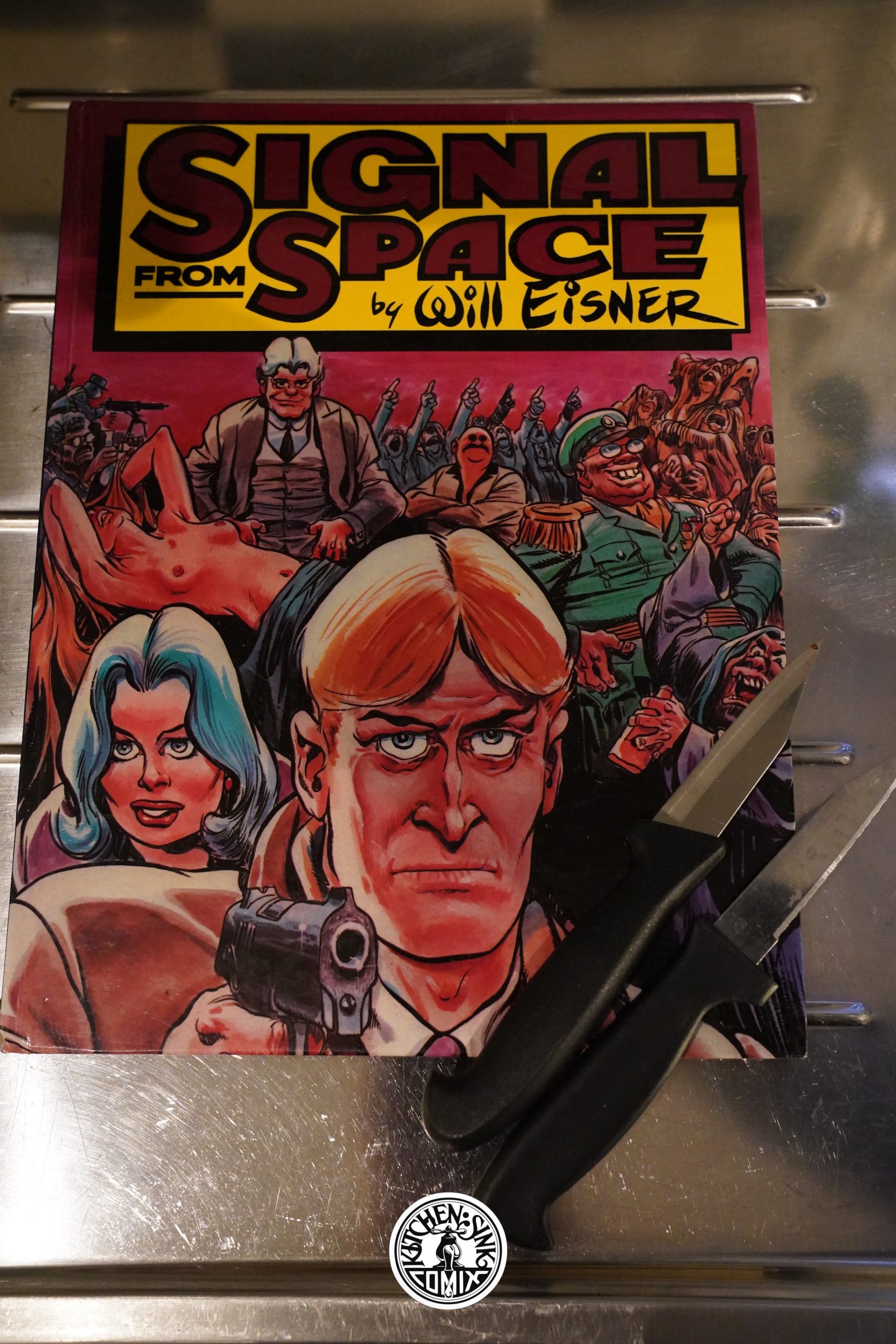 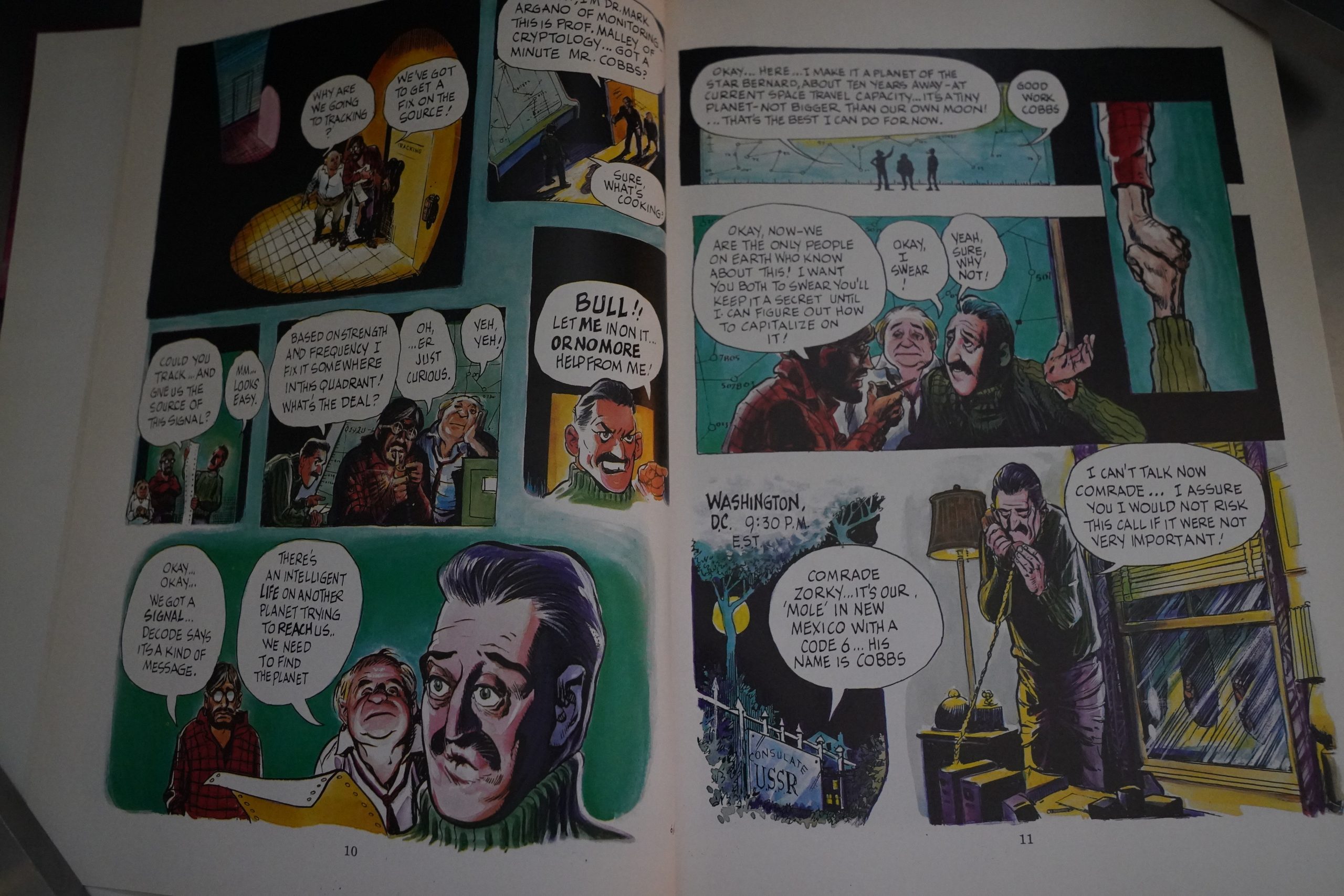 I bought this book when I was about fifteen, I guess? It sort of occupied a special place amongst my comics — I would look at it sometimes, but I don’t think I read it more than once. I kind of admired it? But… I didn’t really like it.

And reading it now, I can totally understand why. 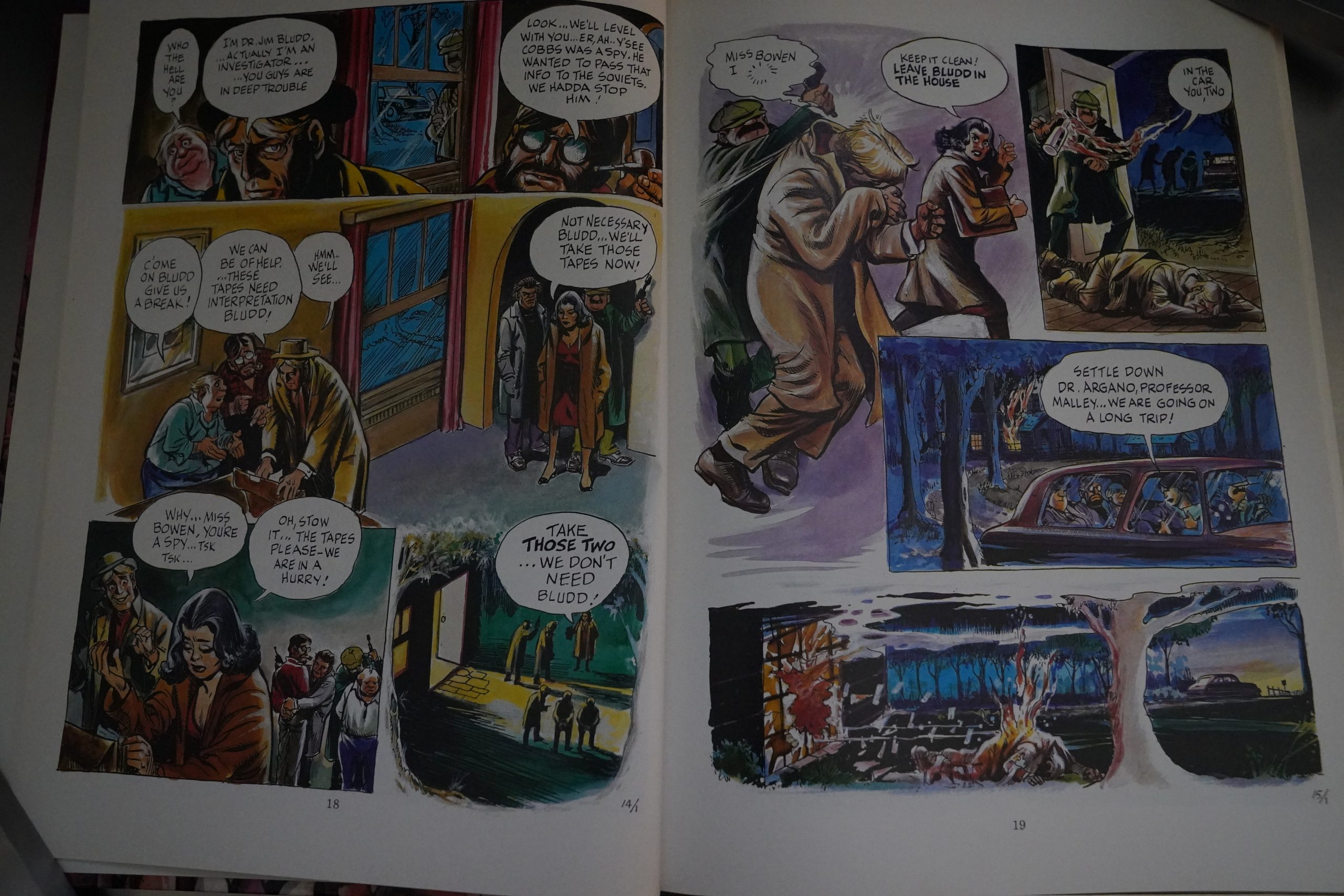 This is a “satire” about what would happen if intelligent life were to be discovered on another planet. So lots of venal scheming and etc.

It was originally serialised in the Spirit magazine (but in black and white). It’s been coloured for this version, and it looks really good. (It’s printed in Italy.) 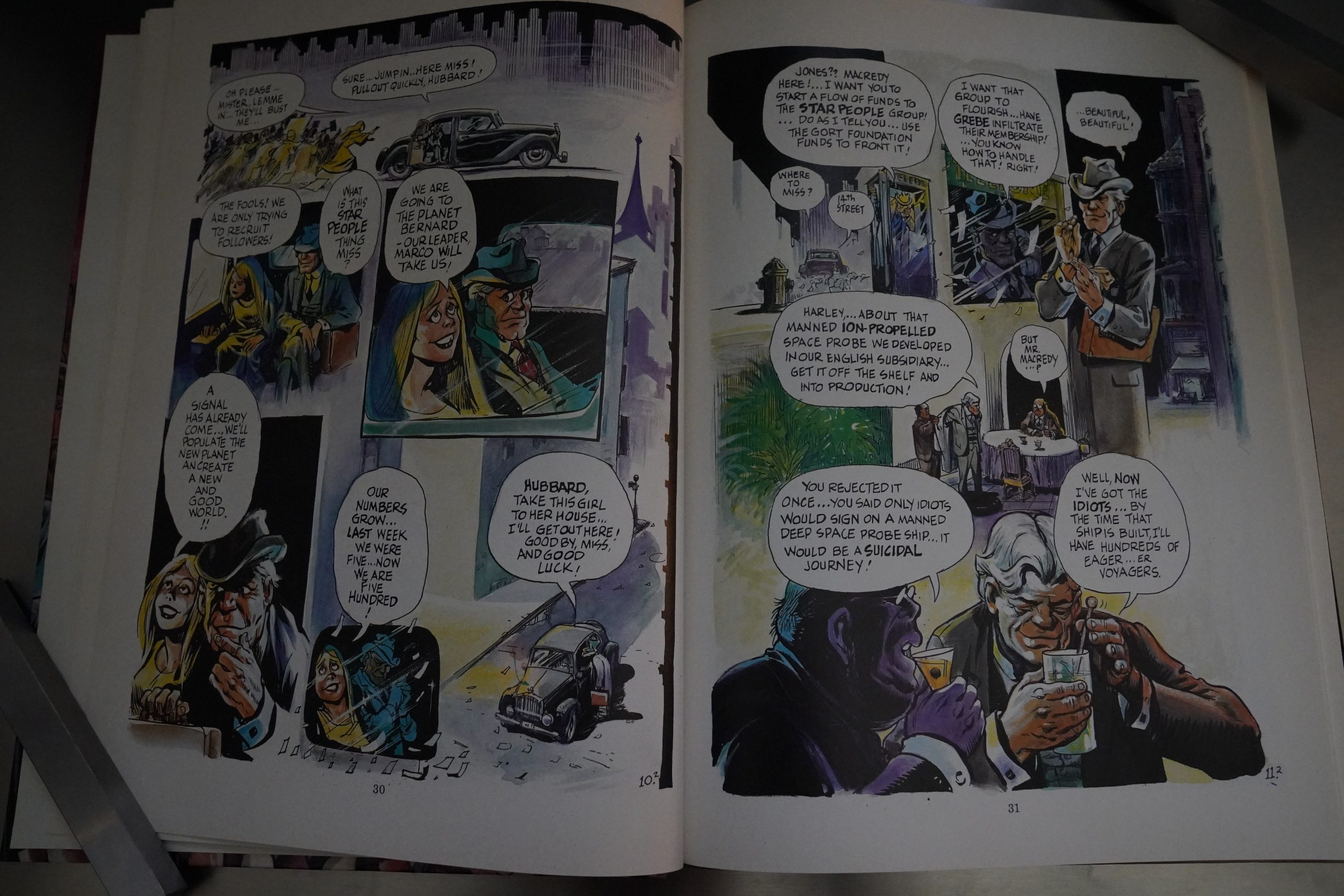 And it’s not that it’s even unrealistic how stupid everything is — we know from the recent years that our branes don’t work that well — but it’s just so choppily told. There’s about two dozen characters, and Eisner is a veteran in getting to plot points very, er, efficiently. (Doing hundreds of seven page stories must be good training.) 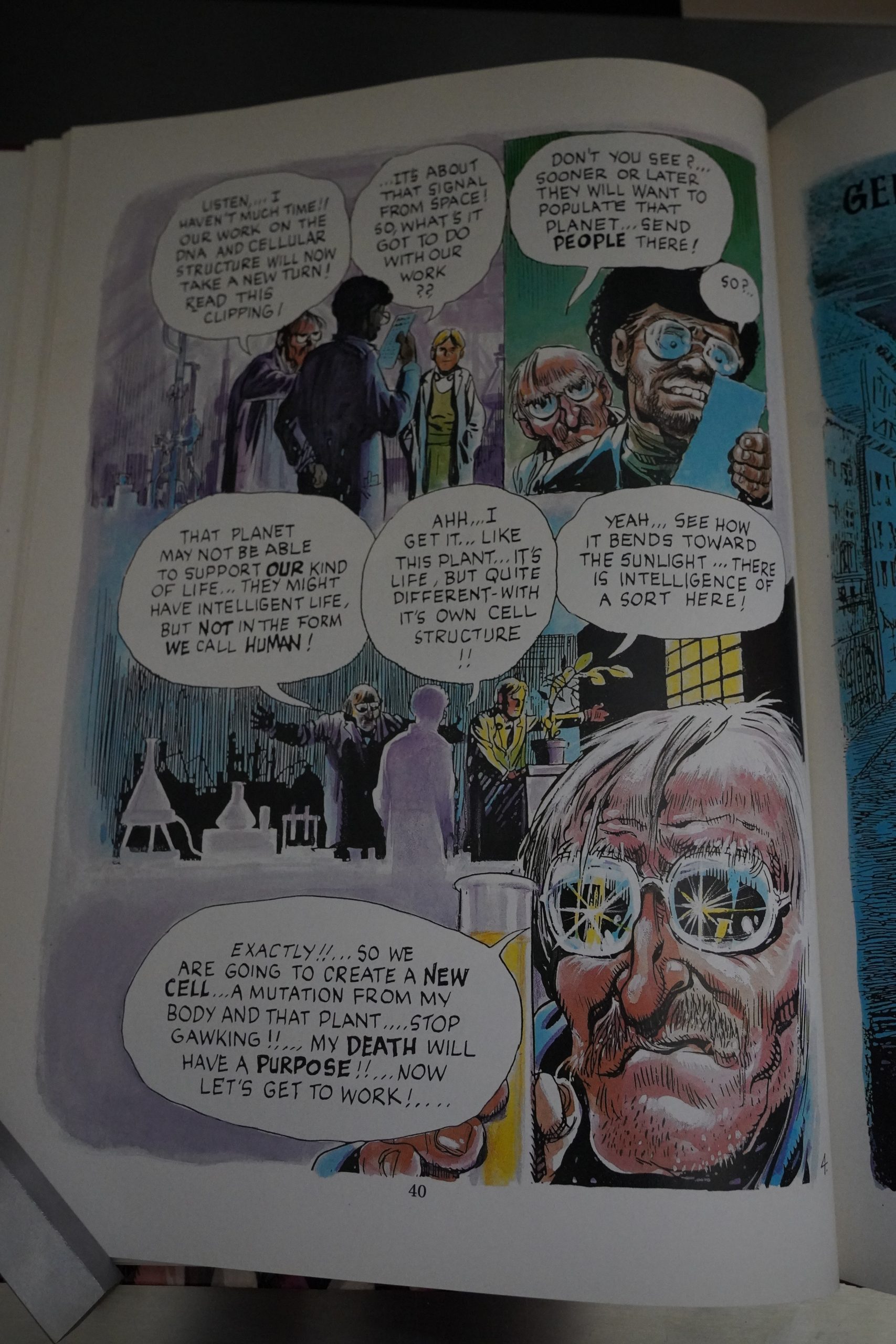 Of all the things that don’t make sense, the bit about this guy dying and therefore splicing his cells with a plant… makes the least sense. I mean… 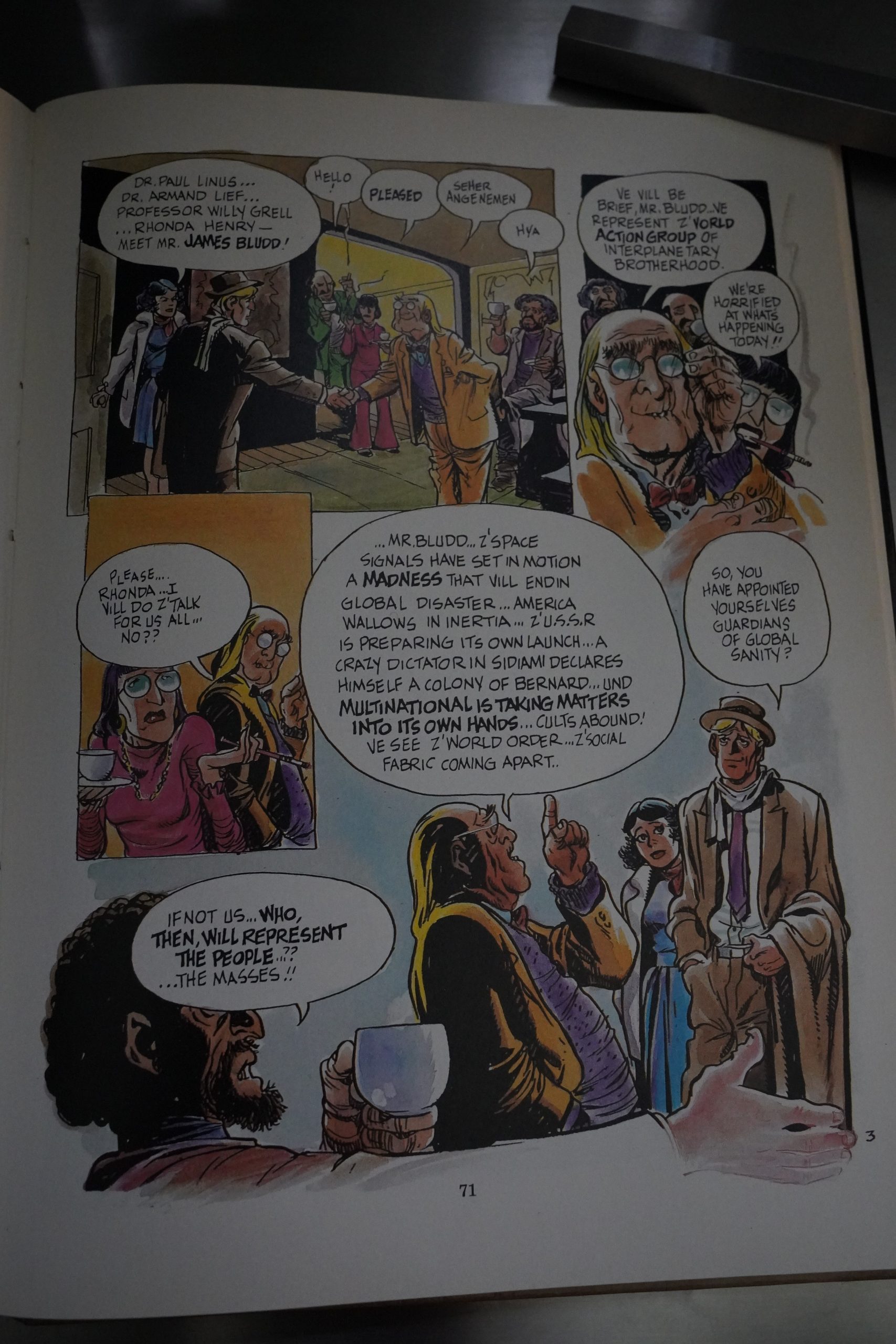 Did I mention this is a satire? Oh, how satirical and droll. 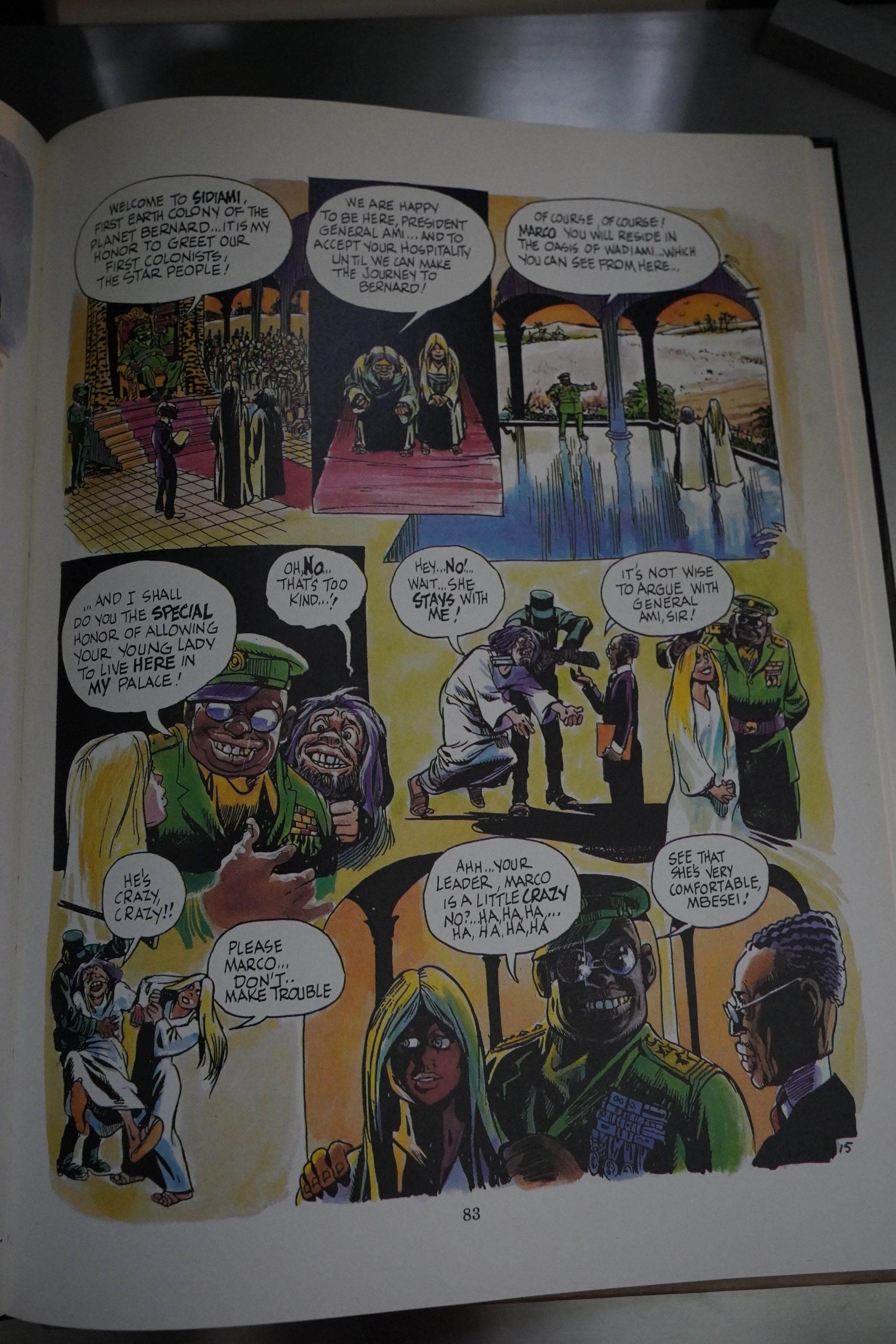 Reading these 130 pages feel like reading the synopsis of three seasons of a New Era of Quality TV series.

And I mean that in the worst way possible.

On the other hand, the artwork’s quite nice.

Eisner has created an epic
nightmare fable that documents human-
kind’s response to a signal from space that
affirms the presence of intelligent life on
another planet. The dim vision of the
human race in Signal From Space grows out
of Eisner’s determinedly grim assessment of
how our world and its leaders might cope
with such an epoch-making development.
For all its macabre and caricatural aspects,
however, Signal From Space raises no better
question than whether its cynicism, which
is overpowering at times, isn’t in fact a form
Of clear-eyed realism. Signal From Space is
not ideological storytelling so much as it is
a drama about ideologies and how people
sacrifice their humanity at the altar of the
hopes, promise, and dreams that are the
raw stuff of ideologies. If Signal From Space
lacks a certain human resonance, it’s at
least partly because the sapping of redeem-
ing, sympathetic qualities from the central
characters as they compromise away their
humanity is a key focus of Eisner’s theme.

I reviewed the Life On Another Planet at
some length in the Journal and so won’t
reiterate my earlier thoughts here. I will
note that those who perceived my review
as schizoid were quite accurate, This is a
major piece of work from one of the
medium’s acclaimed masters: he has given
us a startlingly vivid and complete
speculative vision of a possible future,
based on how he understands and imagines
our world. At the same time, there are,
think, grievous flaws in the very idea of the
work—in the conception of the story, , in
how the characters have been worked out,
in the very thought behind much Of the
work—that inhibit unqualified praise of
the piece as a work of art. So I’m Of two
minds about Signal From Space. It’s heroic,
daring, and moving, but it’s also, at inter-
vals, shallow, banal, and tiresome. NO neat
capsule judgments here, folks, just
unresolved feelings about work from a
master that deserves to be read and argued
about.

The coloring is extraordinarily well-
managed—Eisner and Andre LeBlanc did
the coloring themselves—but the fact of
color adds an elements of artifice and
refinement that, for me, intrudes upon the
pristine reality of the artist’s original black
and white images. What so impressed me in
the black and white installments—the
sense Of observing a remarkable stylist
reduce his means to the near-elemental in
an effort to distill the raw, primal truth of
his imaginings—is oddly muted by the
meticulous and subtle artistry of the
washes. Mine is undoubtedly a minority
view, and an impractical one; I’m not
unmindful •that color will help sell this
book, but Life On Another Planet has a
violence that disturbed me more profound-
ly in its earlier incarnation.
Eisner has. redrawn and retouched the
first two chapters from their original
appearance in The Spirit Magazine (where
they appeared in an ill-advised sideways
format with pages about the size of a small
paperback book). Quite a few pages have
been completely redrawn. Eisner’s deft
reworking of the material is a matter Of
opening up some of the cramped panels to
suit the larger scale of the book format
—adding a panel here, refashioning a back.
ground or expanding the size of an image
there. In the book’s first chapter, Eisner
has substantially redrawn the character of
Bludd. Throughout much Of the original
opening chapter, Bludd is very sketchily
rendered, as though Eisner were rushed or
careless or, more likely, hadn’t quite settled
on a “look” for the character. In the revised
version, Eisner has “drawn” a whole Com-
plex Of attitudes and values into Bludd,
clarifying what kind Of man he is on his ini-
tial appearance. There are other small
changes of nuance (such as the new, malign
expression on Grebe’s face On page 36) that
provide intriguing glimpses into Eisner’s
methods. Those with a serious interest in
Eisner will want to note the changes he has
made, particularly those in the first
chapter.

But Eisner has an inexhaustible
bag of tricks that makes every page
of every story visually and narrative-
ly unique. Despite all the experi-
mental hotshot young artists of the
last twenty years, Eisner can still
startle us with a panel layout or a
storytelling trick. But more than
that, .. Eisner uses his bag of tricks
to tell stories of genuine, ,heartfelt
humanity and literary value. It is his
perfect synthesis of startling techni-
que and deep human reality that
makes “Life on Another Planet” the
artistic summit of comic book
science fiction.

LUCIANO: How is something like Signal
From Space received differently in Europe
than in the United States?
EISNER: Well, Signal From Space is a
socio-political comment wrapped in a spy-
adventure yarn. It deals with an adult
premise in diverse situations. It is
“realistic” science fiction. I believe it has
experienced a good reception in the Euro-
pean marketplace because the European
market represents a more diversified au-
dience than we have in this country. These
seems to be a larger group of adult readers
with the life experience that is capable of
understanding storytelling that relates to
real experience. Here, superheroes still
dominate the output. I’m not dealing with
two mutants killing each other, I’m dealing
with real life, people involved with life
itself. This requires a common experience
between me and the reader. When I write I
intend to share an experience. I’m telling a
Story that deals with an aspect of life. A
case in point is a book I did recently, Life
Force. This is a reportage that deals with
the history of my experience, or experience
that I’ve seen, or felt, or been aware of, dur-
ing the ’30s. It deals with life during 1934.
It’s reportage, in the pure sense. As most
storytelling is.
The point is that, the publishers in
Europe seem to be willing to respond to a
marketplace that accepts the comic-book
nwdium as a valid, legitimate literary form.
A very important thing when you consider
it. It has an effect on the kind of work I’m
doing, and provides me with the market-
place that I’m working for. Here in the
United States, the marketplace is more
severely divided, even though it has a vast
young audience, a preponderance of young
readers whose interests are in fantasy art,
and whose interests are in science fiction,
mutants, for example, that is Teen Titans
and X•Men, things of that sort, and whose
life experience, as readers, is not really con•
ducive to a concern with man against the
system or against life itself. They’re con-
cerned largely with fantasy or escape. Their
interest seems to be largely in the, what I
call sensory experience, and, they are also
influenced, the young readers, largely by
motion pictures, Which have in the past
been influenced by comics. so you have a
kind of dog chewing on a dog’s tail, the
thing is going back and forth. European
readers are terribly interested in New York
life. One of the most successful comic strips
coming out of France right now is done by
this Italian boy named Liberatore, doing
Ranxerox, which is a violent, violent, sex•
laden strip. Beautifully drawn, magnifi-
cently executed. It deals with, realty, punk
life, and, really, very distasteful to adult
readers in this country who are concerned
with that kind of living as being a part of
the inner city in L.A. So we have a differ•
ent kind of interest. Another strip that’s
doing very well in Europe, that originated
in Spain, and originally the first issue was
done by Alex Toth, is a thing called
Torpedo which, fantastically, Concerns
itself with a hitman in the ’30s, a gangster
and bootlegger era, who’s really a terrible
person, a killer, and who is the hero of the
strip. Anti-hero if you will. But there’s a
great interest in inner-city living, and in
the American scene. There still exists in
Europe an interest in the Western scene in
this country, which we no longer have. So
you have really two basically different,
broad markets.

This is the sixty-fifth post in the Entire Kitchen Sink blog series.