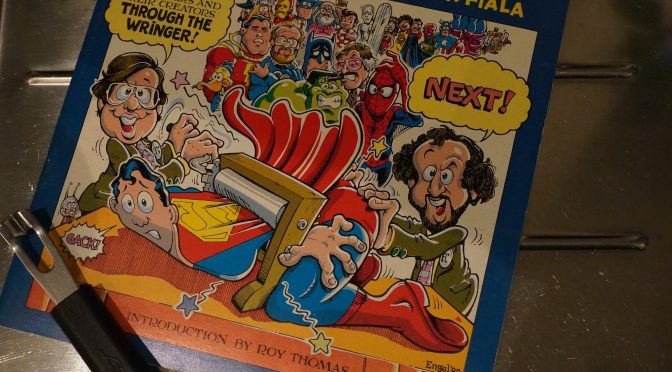 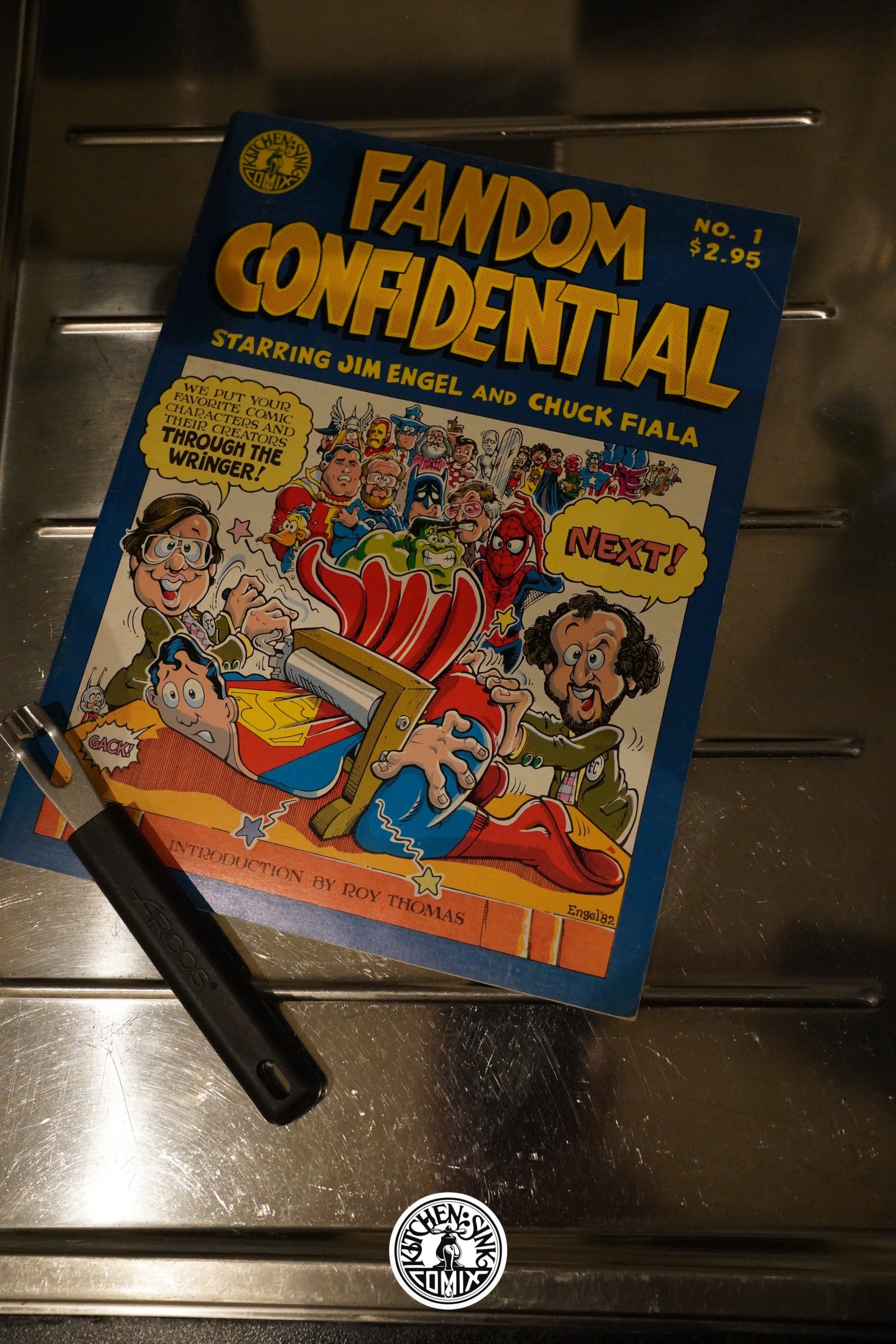 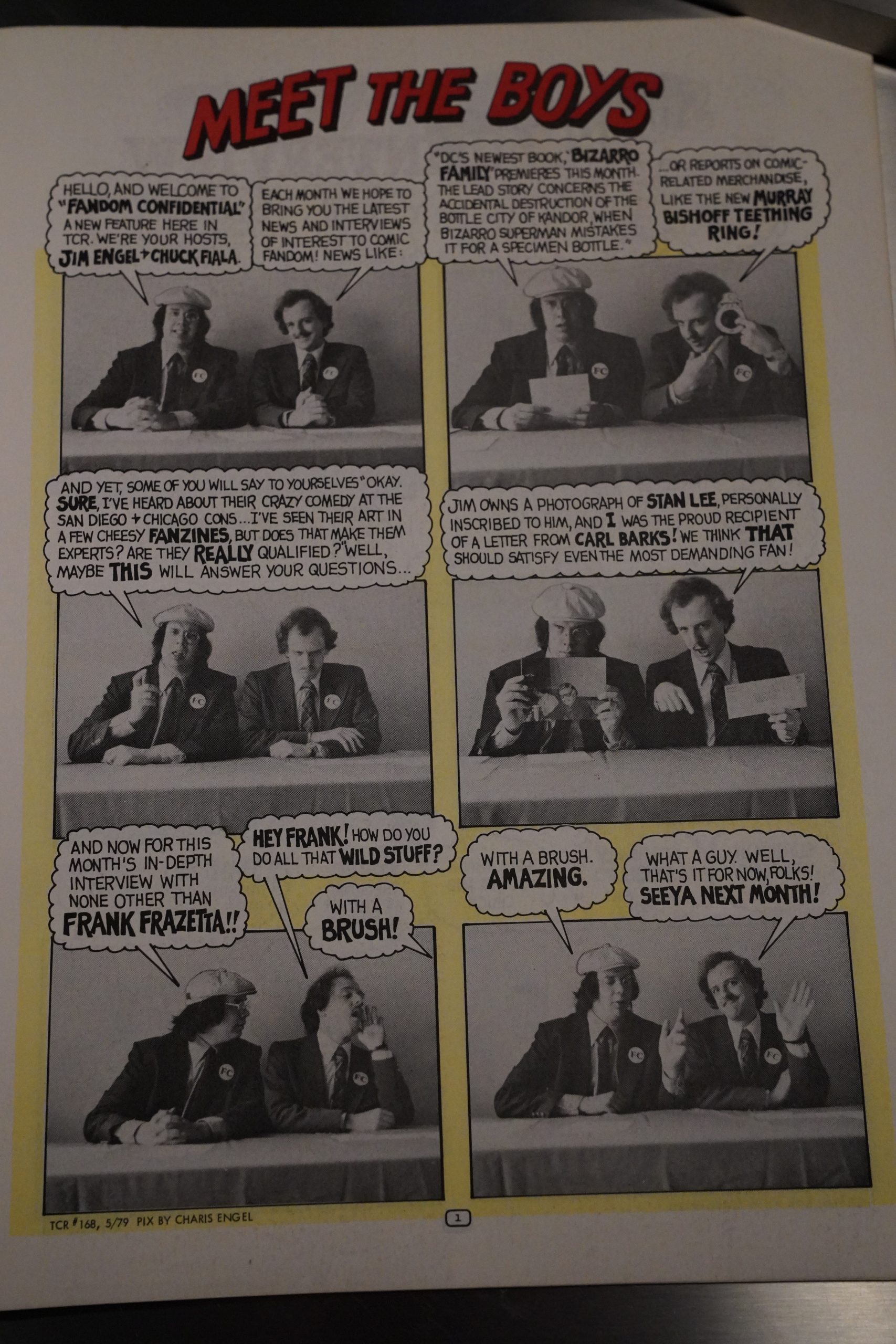 This book reprints these fumetti that ran in The Comics Reader. 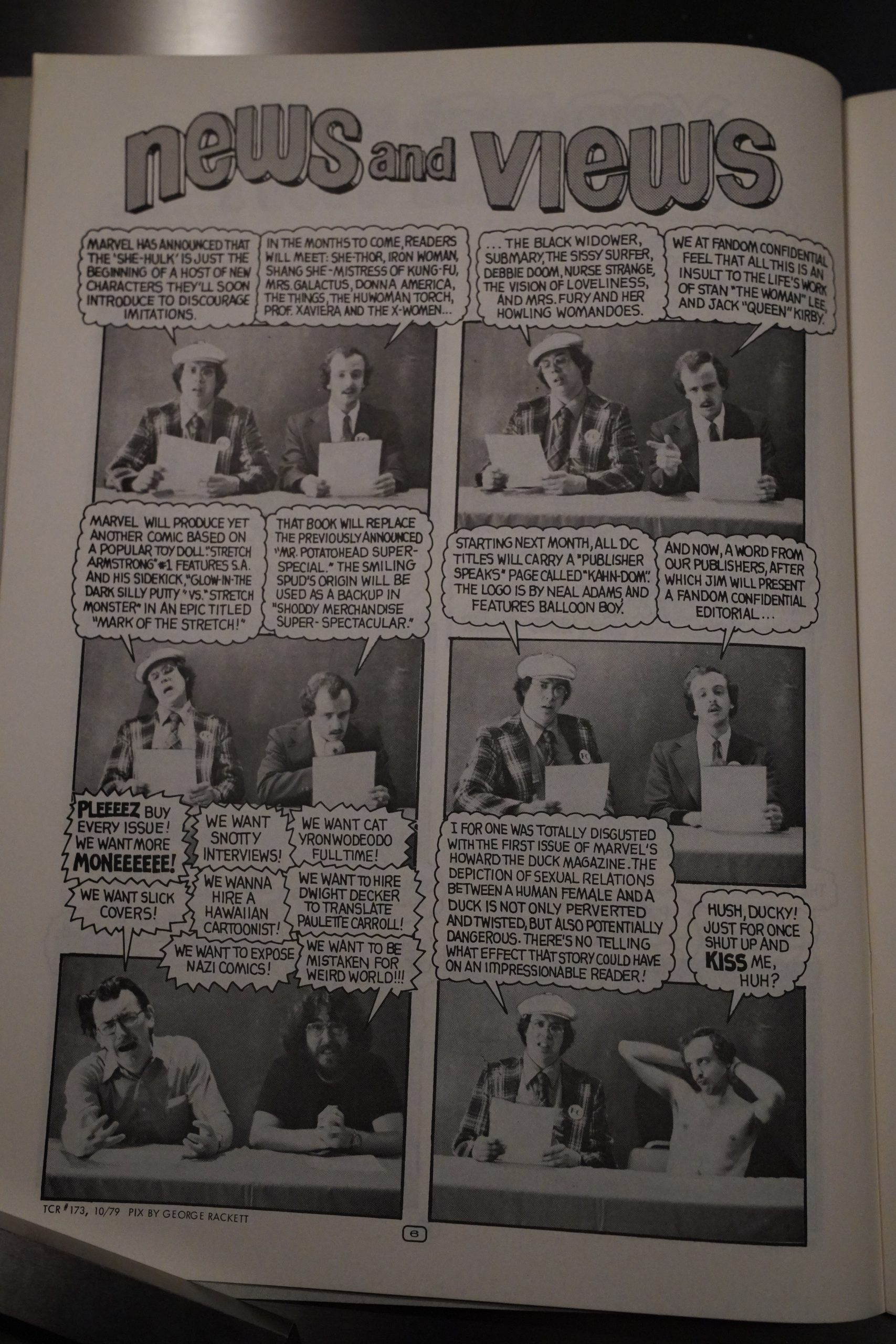 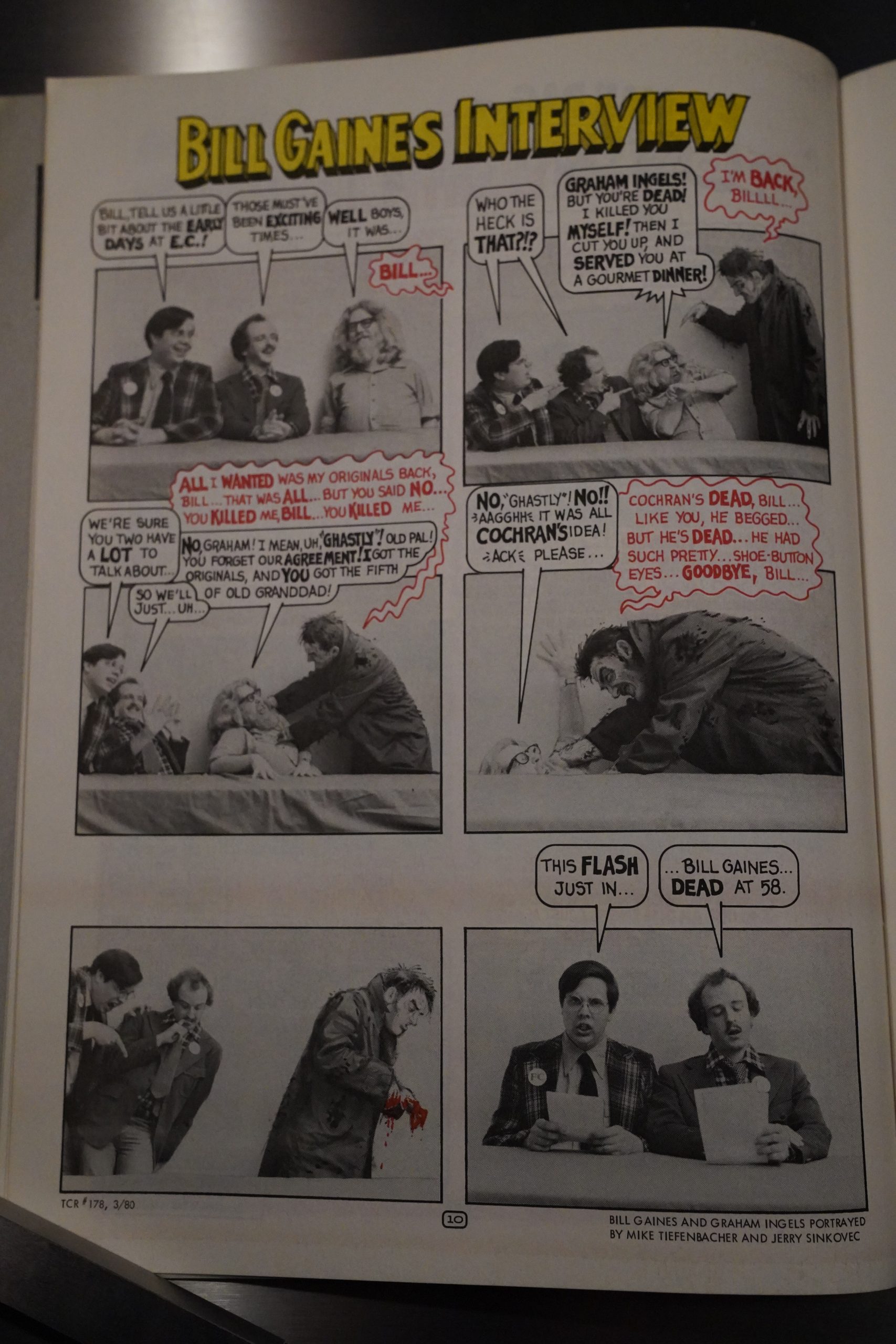 Sometimes other people drop by for some more action-oriented guest appearances, which helps give the book some variety. 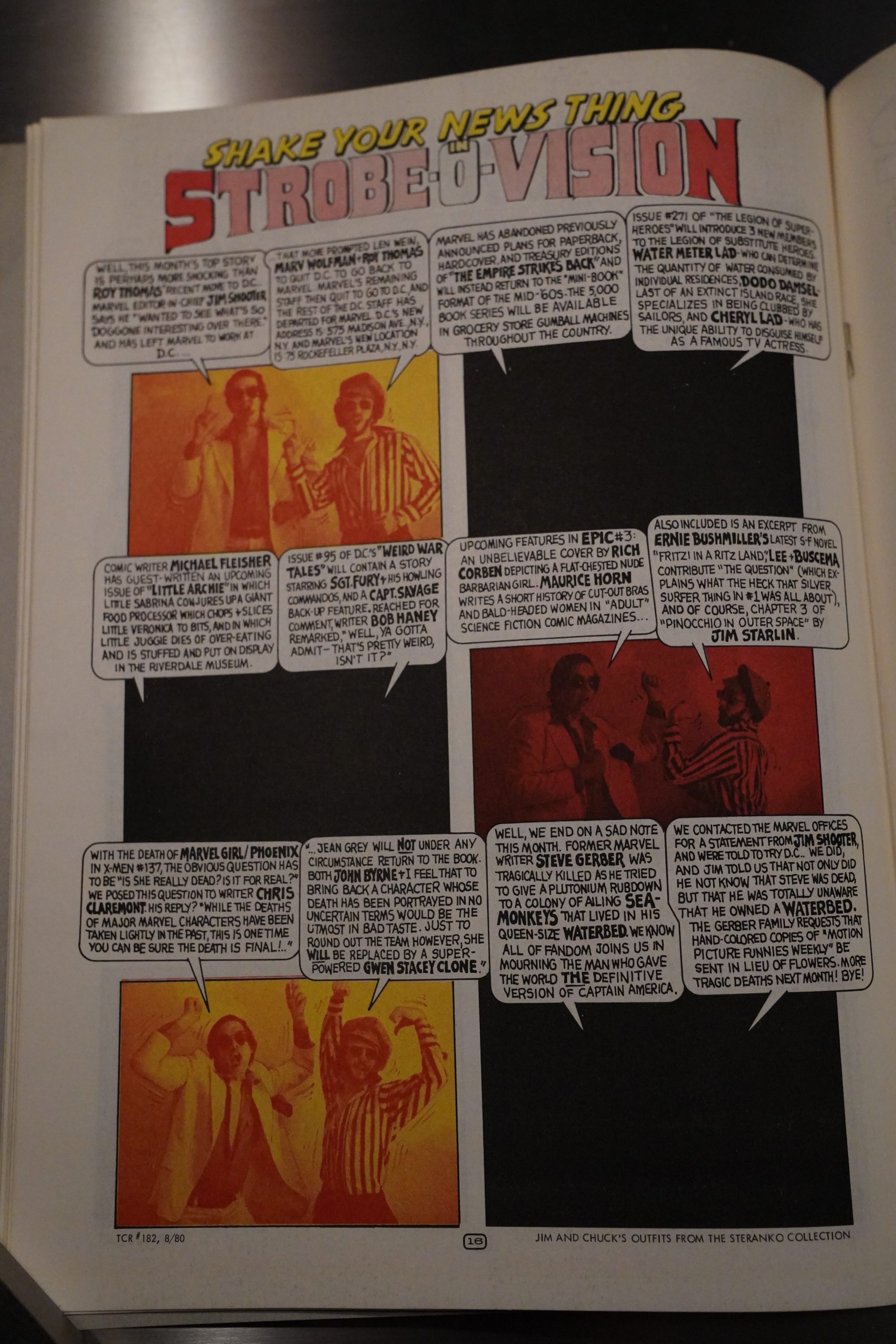 I think they’re pretty accurate in their targets? But it’s not like this is a savage critique of anything. It’s pretty amusing — if you know what they’re talking about, which… I do. I’m so old! If you don’t get the references, then I guess this isn’t for you. 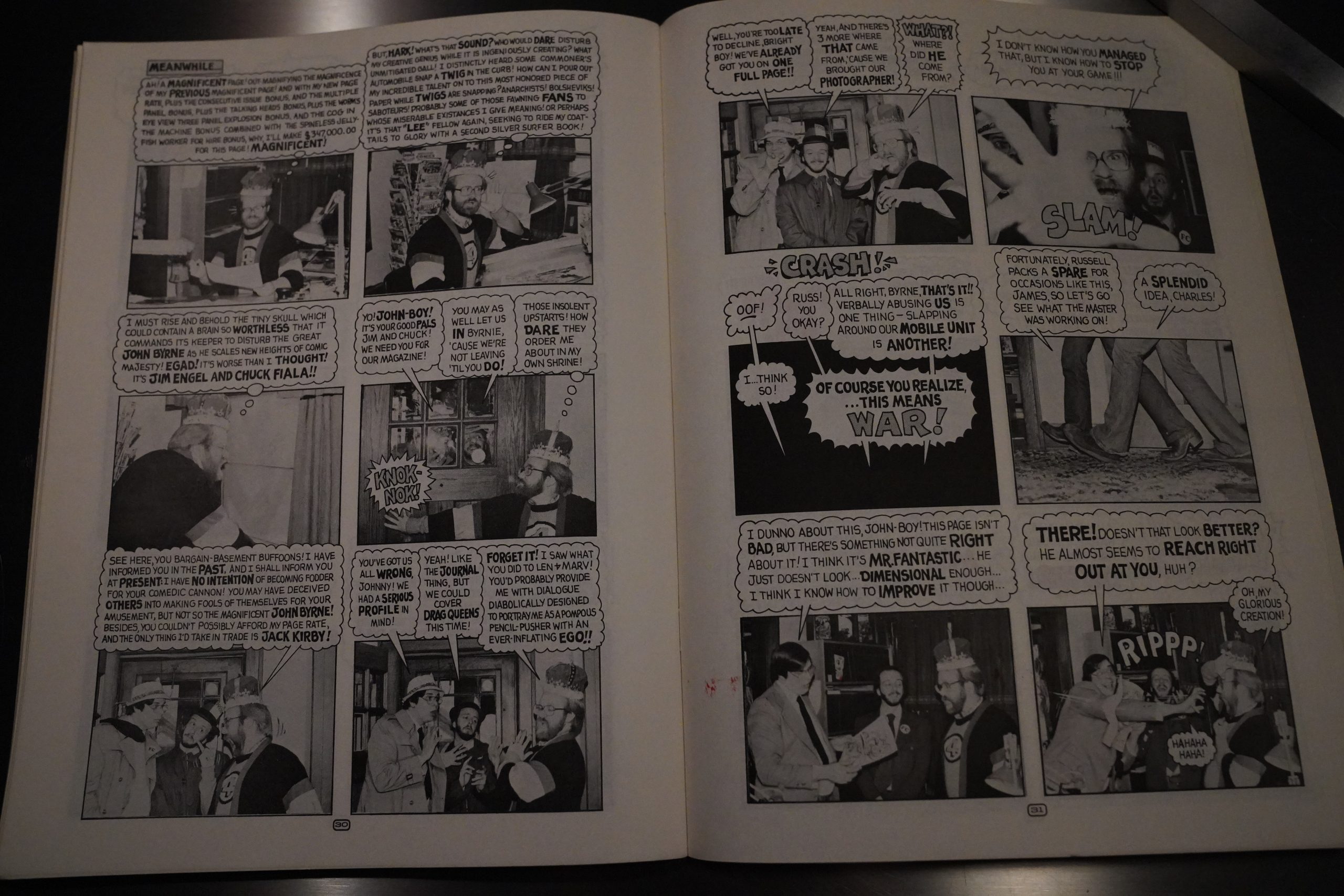 They end the book with a tale called The Obligatory New Pages, which features John Byrne.

Fandom Confidential plugs itself accurate-
ly enough as a satirical lampoon of comic
characters and their creators. While there’s
a mostly funny ravaging of Lee and a huge-
ly amusing debunking of Byrne (portraying
himself as a rampant egomaniac), what I
found most appealing and consistently fun.
ny is Engel and Fiala’s ongoing deflation of
the fan mentality’s absurdism. The image
of Engel soberly displaying an autographed
photo Of Stan Lee as evidence of his impec-
cable journalistic qualifications is satire of a
fairly high order, as is the description
throughout of the steady and mind-
sapping abosrption in the lavish, intricate
trivia of doings at Marvel/ DC. The new,
seven-page story has a funny conclusion
based on the premise that a fan who spends
more than five minutes in the same room
with the regal Byrne turns into a grovel-
ing…well, sycophantic gremlin. And for
once, the dialogue has the emphases in all
the right places: “You’re my favorite artist
in the whole world!” Brandishing a copy of
The Art of John Byrne, Engel pleads, “Pleez
could you sign this book? I’ll never sell it, 111
keep it forever, Oh pleeezz??” We may also
credit Engel with delineating the quint-
essential fanzine interview with a degree of
coldblooded accuracy:
ENGEL: And now for this month’s in.
depth interview With none Other than Frank
Frazetta!!
FIALA: Hey, Frank! How do pu do all
that wild stuff?
[Speaking from outside the
panel:] With a brush!
ENGEL: With a brush. Amazing.
What a guy.
And while I rarely laugh out loud while
reading comics, there’s one strip involving
Engel’s dada attempt to pass himself off as
Popeye that had me in mild hysterics for at
least a full minute. Only a couple of the
strips fall flat (in pariicular, I could have
lived without the strip that has Engel/ Fiala
in a fistfight with Buyer’s Guide publisher
Alan Light), and Engel makes such wry, in-
ventive use of this little used form that you
begin to wish the energy and invention
that went into creating these strips had
been channeled in a less cultish direction.
Still, if you’re savvy to the in-jokes and
references, Fandom Confidential is great
fun.

This is the sixty-fourth post in the Entire Kitchen Sink blog series.