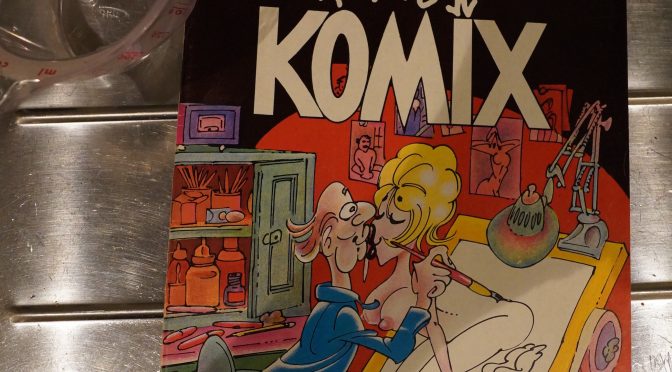 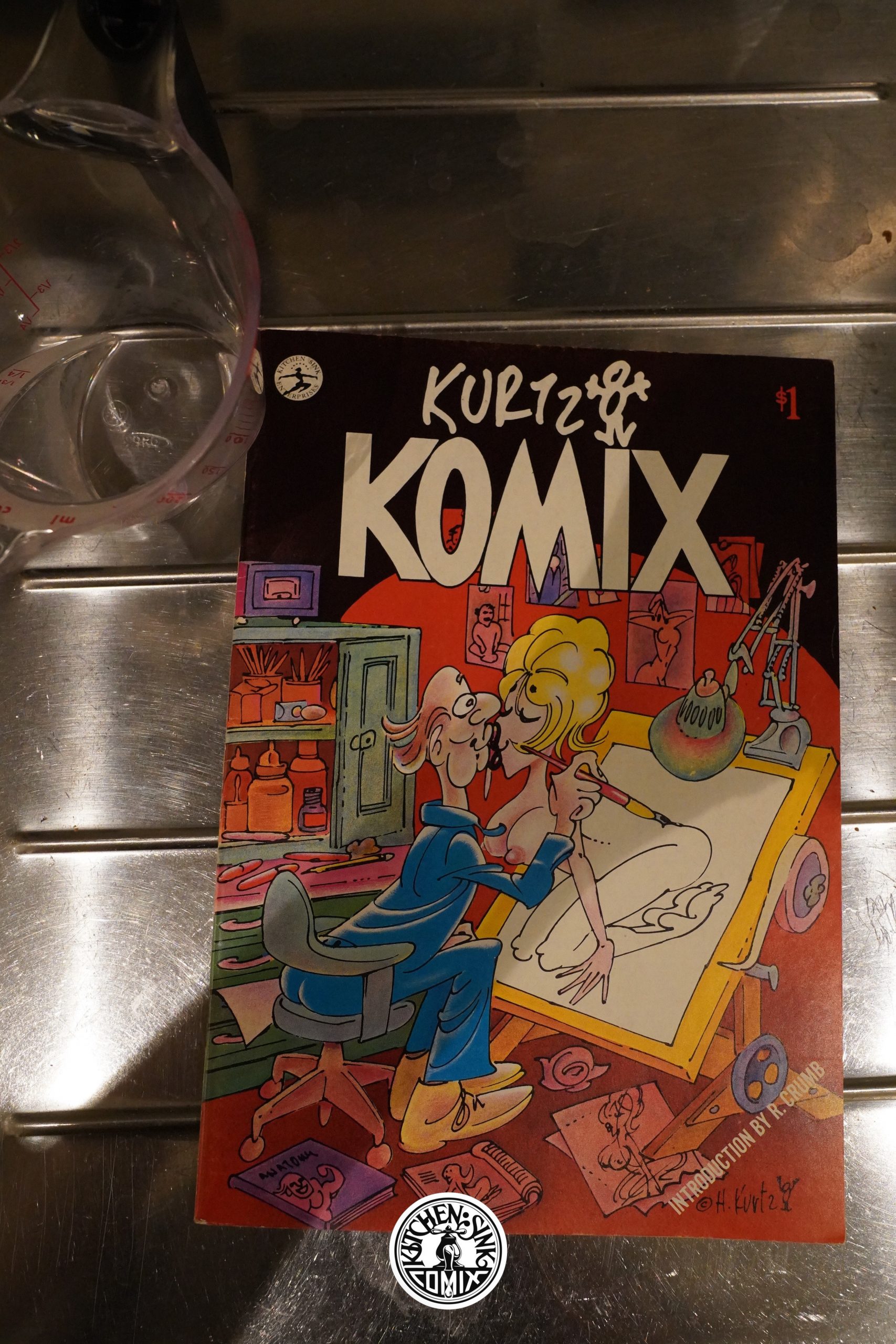 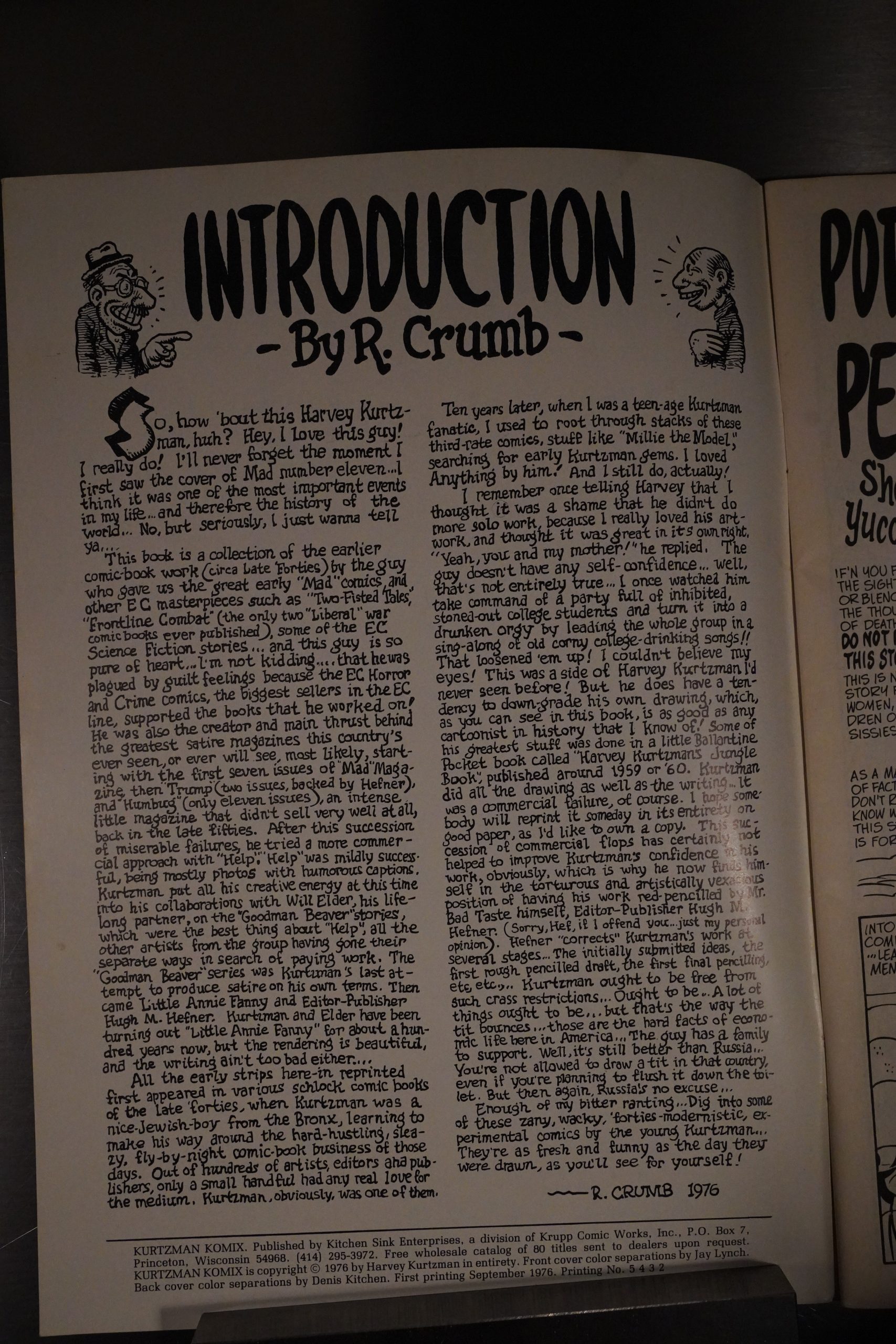 Kitchen Sink would eventually be the home of basically all the pap pap comics legends, but they were still sort of nibbling around the edges in 1976. They’d done a couple of issues of The Spirit, and here comes a 32 page reprinting of random Kurtzman comics from the 40s.

The introduction by R. Crumb is pretty good (and presumably helps sell the book to an underground audience). 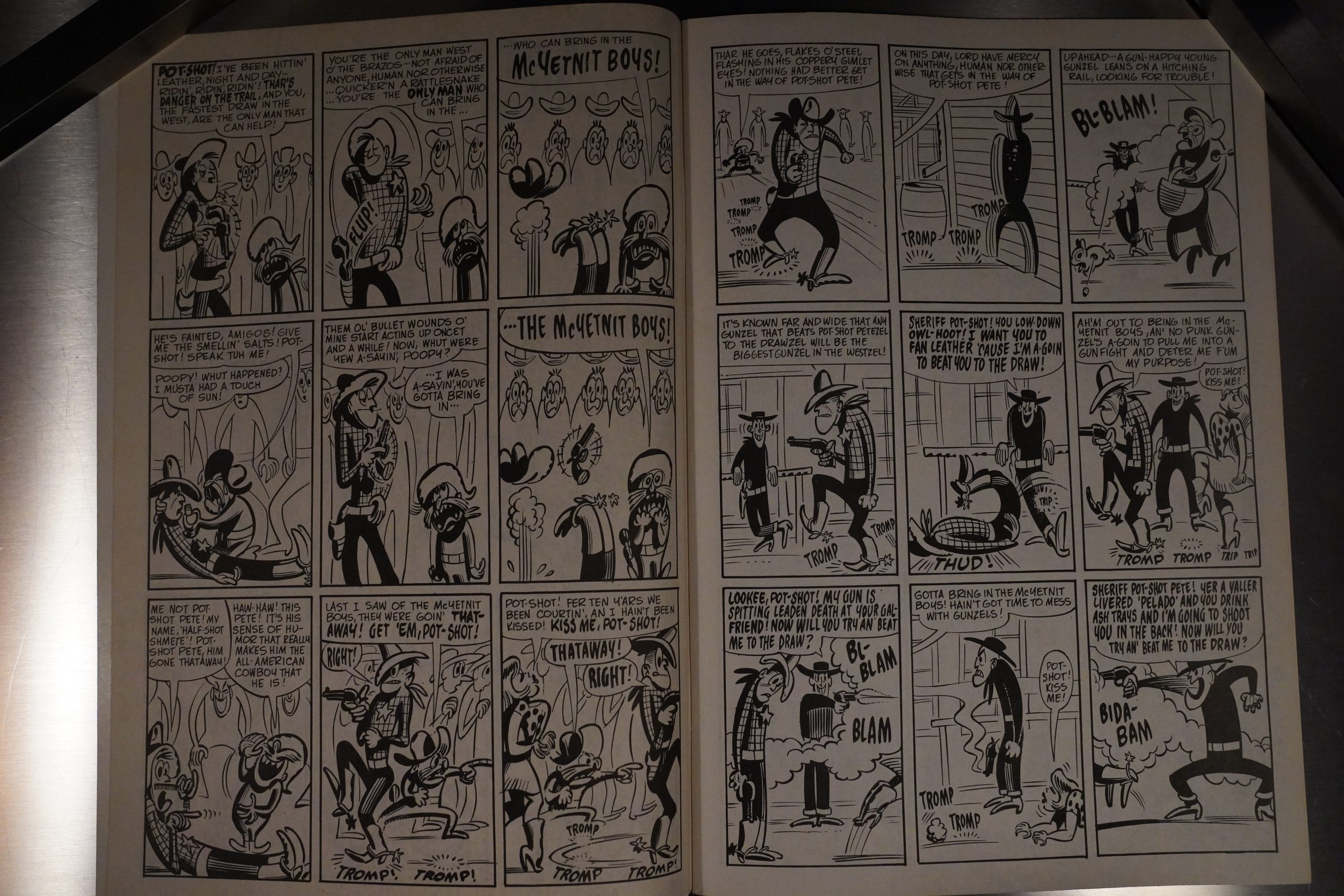 It’s not stated explicitly where these comics are from — and there’s only Pot-Shot Pete, Sheldon and Hey Look! strips.

The Pot-Shot Pete strips are the most interesting graphically, I think. (Here we see the bad guy fridge the hero’s sex crazed fiancee (sort of.)) 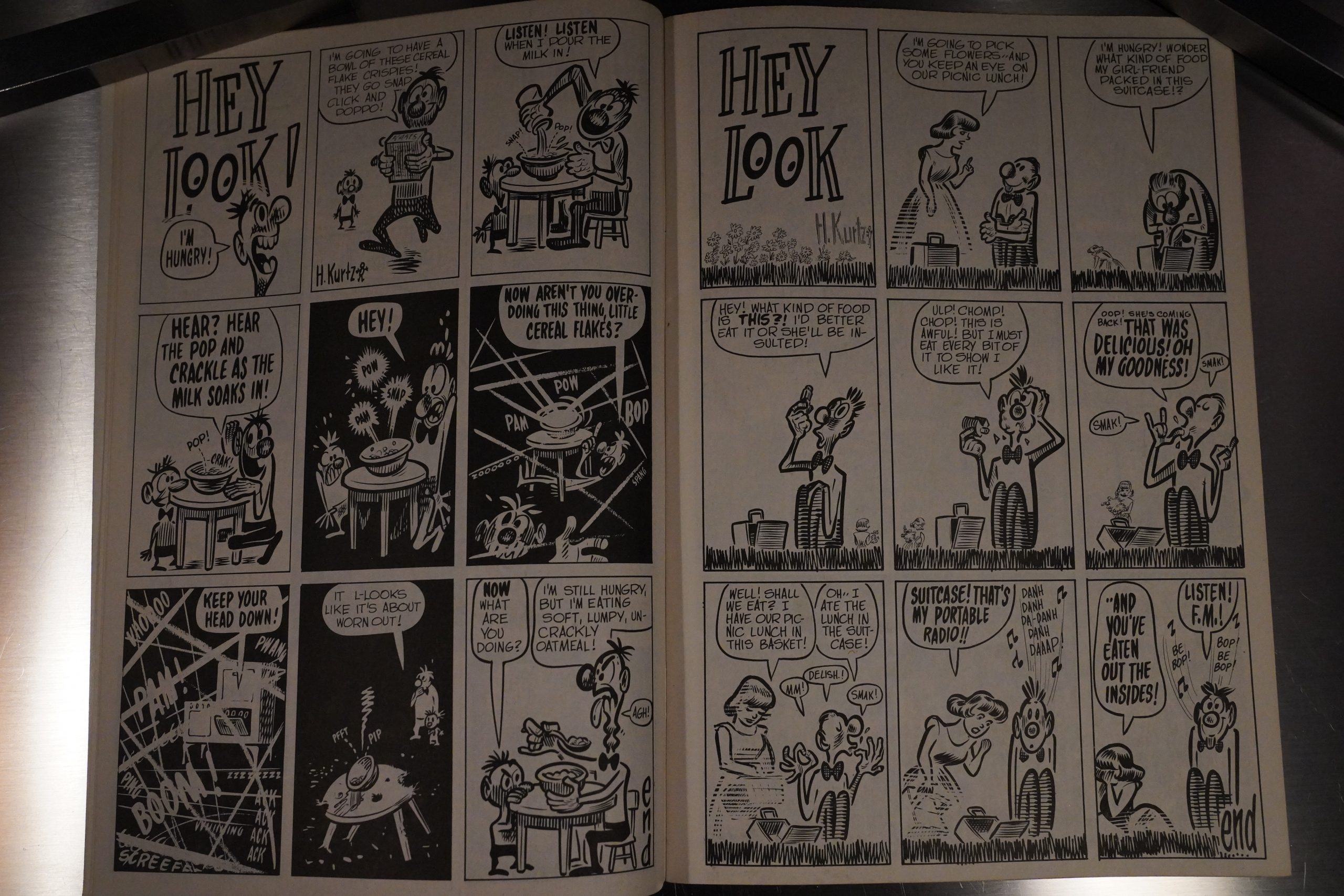 I think I’ve read many (all?) all of the Hey Look! strips before? 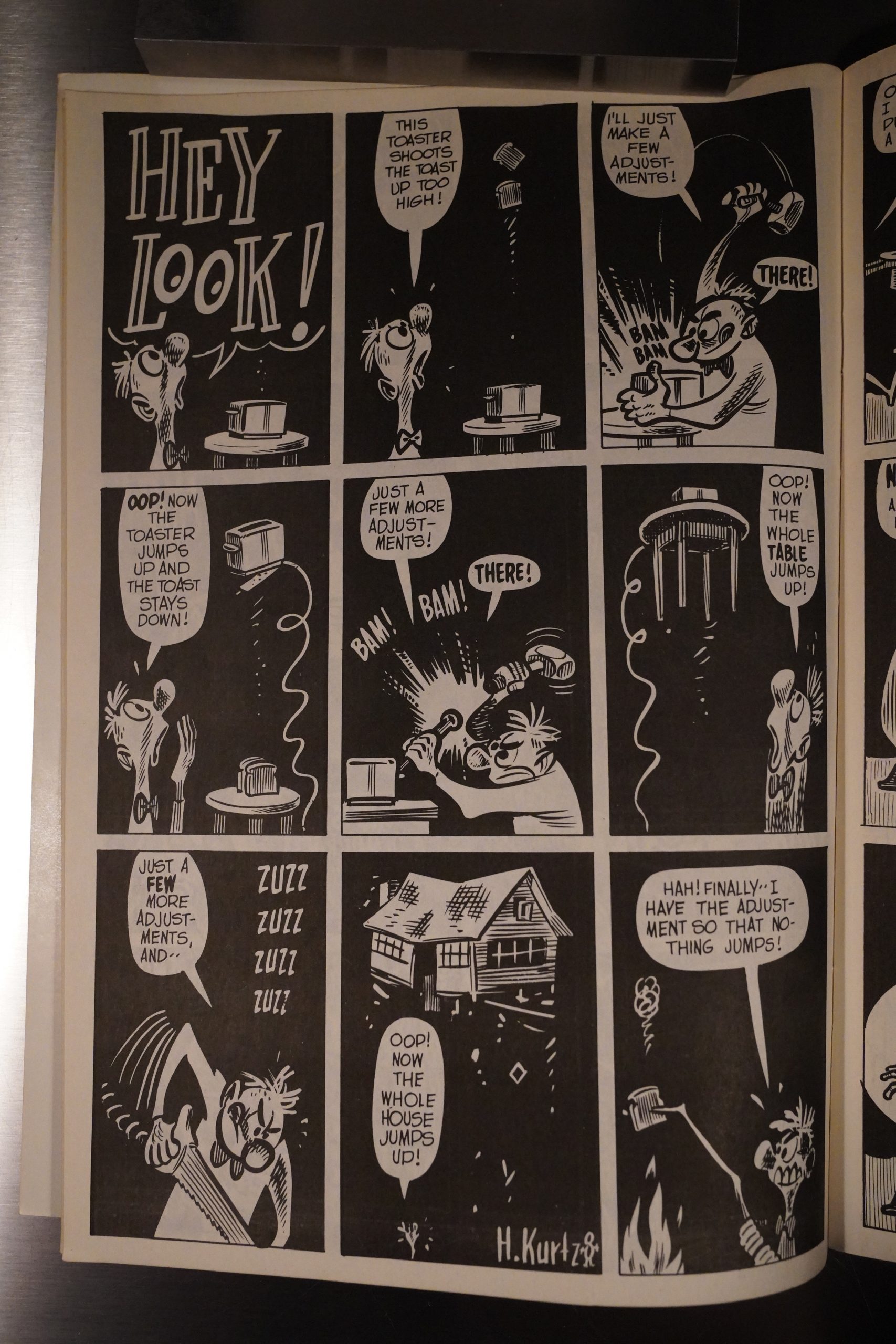 They’re a bit hit or miss, but the ones that do work are kinda genius. 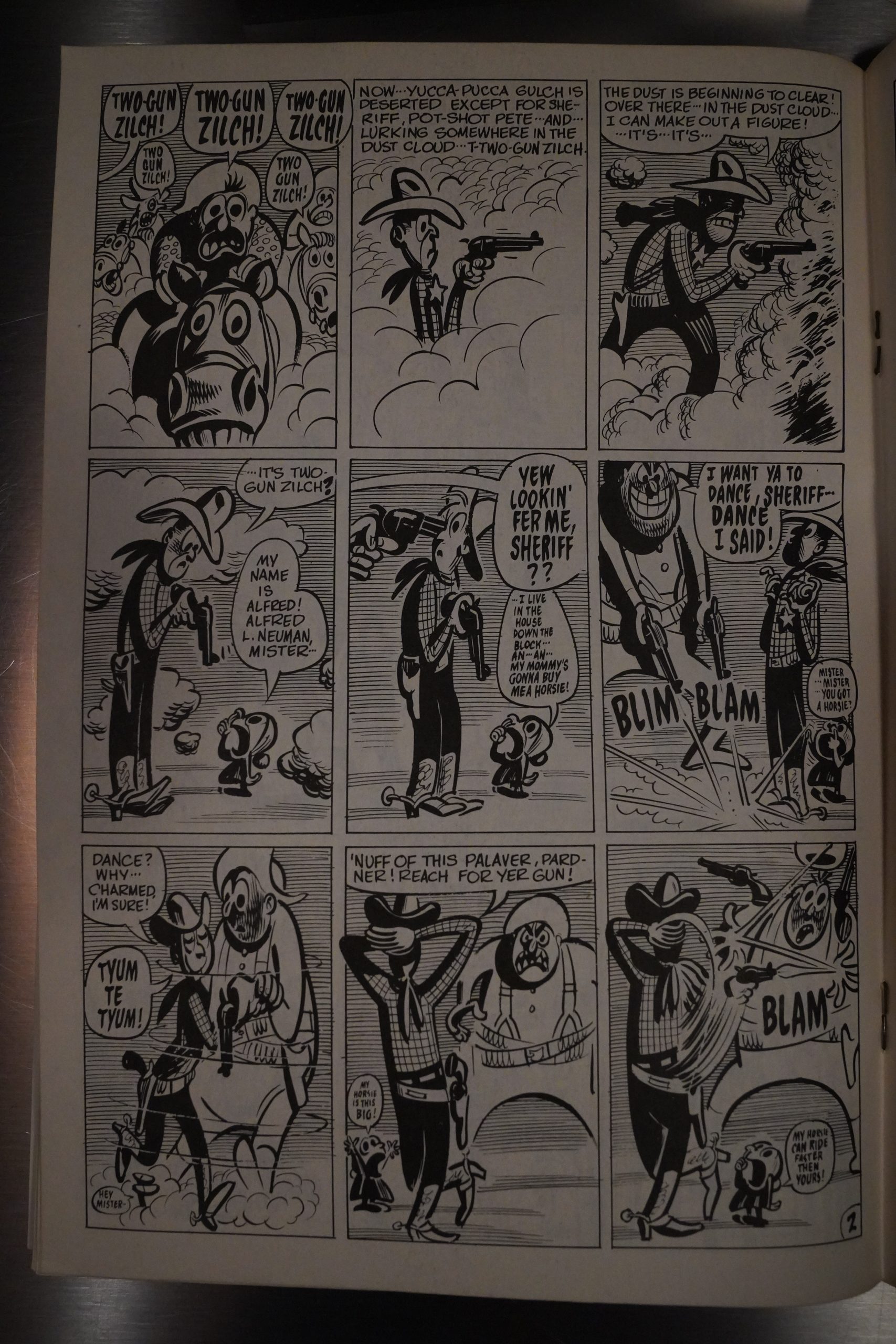 It was apparently not a success:

Kitchen Sink printed approximately 9,000 copies of this comic book. It has not been reprinted.

Hm… but my copy says that it’s a second printing? I think ComixJoint is mistaken.

KURTZMAN KOMIX
This 32-page black-and-white collec-
tion is more widely available now via
a resolicitation (rather than a reprint)
of its second printing; it was first pub-
lished in .1976.

Finally, there is another series of
one-page strips; entitled e”Hey Look.”
Here we) have a poor slob (who is
never named) who always ends up
with the short end of the deal. Part of
the charm is in trying to figure out
how he’ll get it this time and some of
the gags are nicely inventive and am-
using. But even when you can see it
coming a mileÄvay, there is some
weird pleasure in seeing how it grinds
out.
Kurtzman crams a lot of fun and
action onto every page and this vol-
ume is definitely worth the rather
modest cover price. And speaking of
the cover, it features a humorous illus-
tration of Kurtzman kissing a bare-
breasted beauty who is emerging from
his drawing board. Nice though it is
(and also appropriate, I guess, given
his involvement with Little Annie
Fanny), I uonder if it is fitting for this
particular comic as it is certain-
ly not indicative of the nature of the
contents.
Besides being a fine look at a pre-
Rtvrws
vious era in the history ofcomics, this
edition will hopefully help to increase
the awareness of Kurtzman by the
comics reading public. Obviously, he
deserves no less.
GRADE: ! ! ! 1/2

So Kitchen still had copies of the second printing left in 1989? So not a huge seller.

This is the thirty-fifth post in the Entire Kitchen Sink blog series.