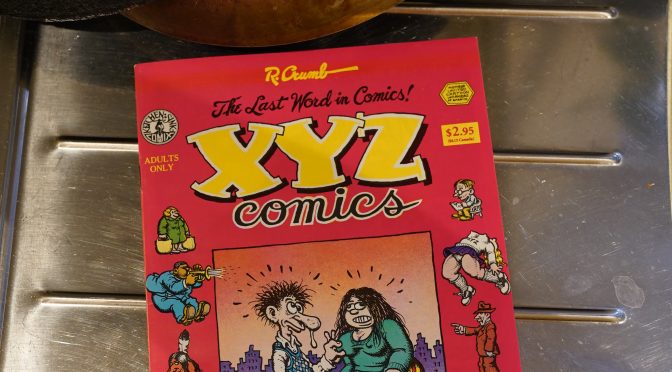 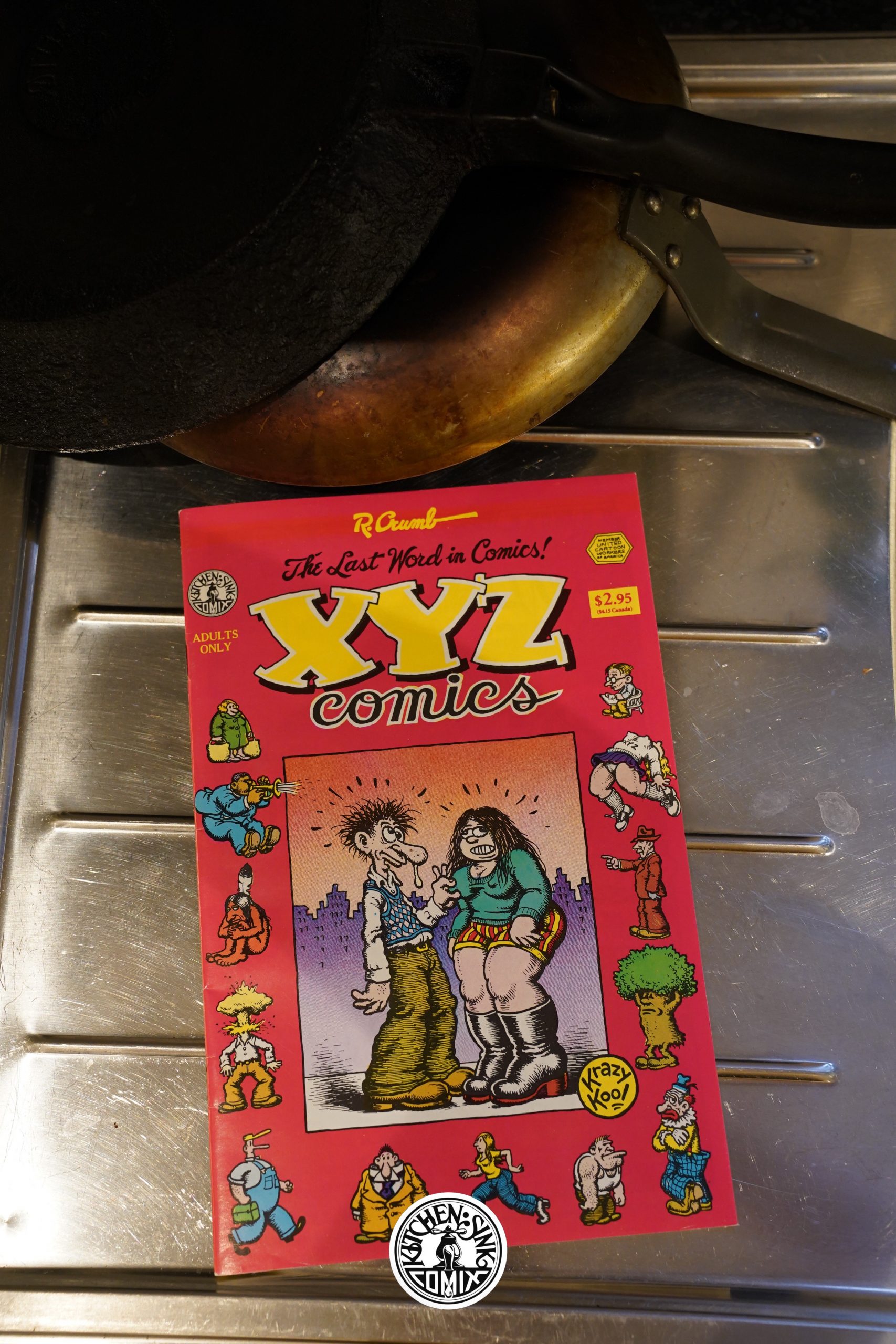 The previous Crumb book published by Kitchen Sink, Home Grown Funnies, is one of the most beloved underground comics of all time. So how does Crumb follow up that? 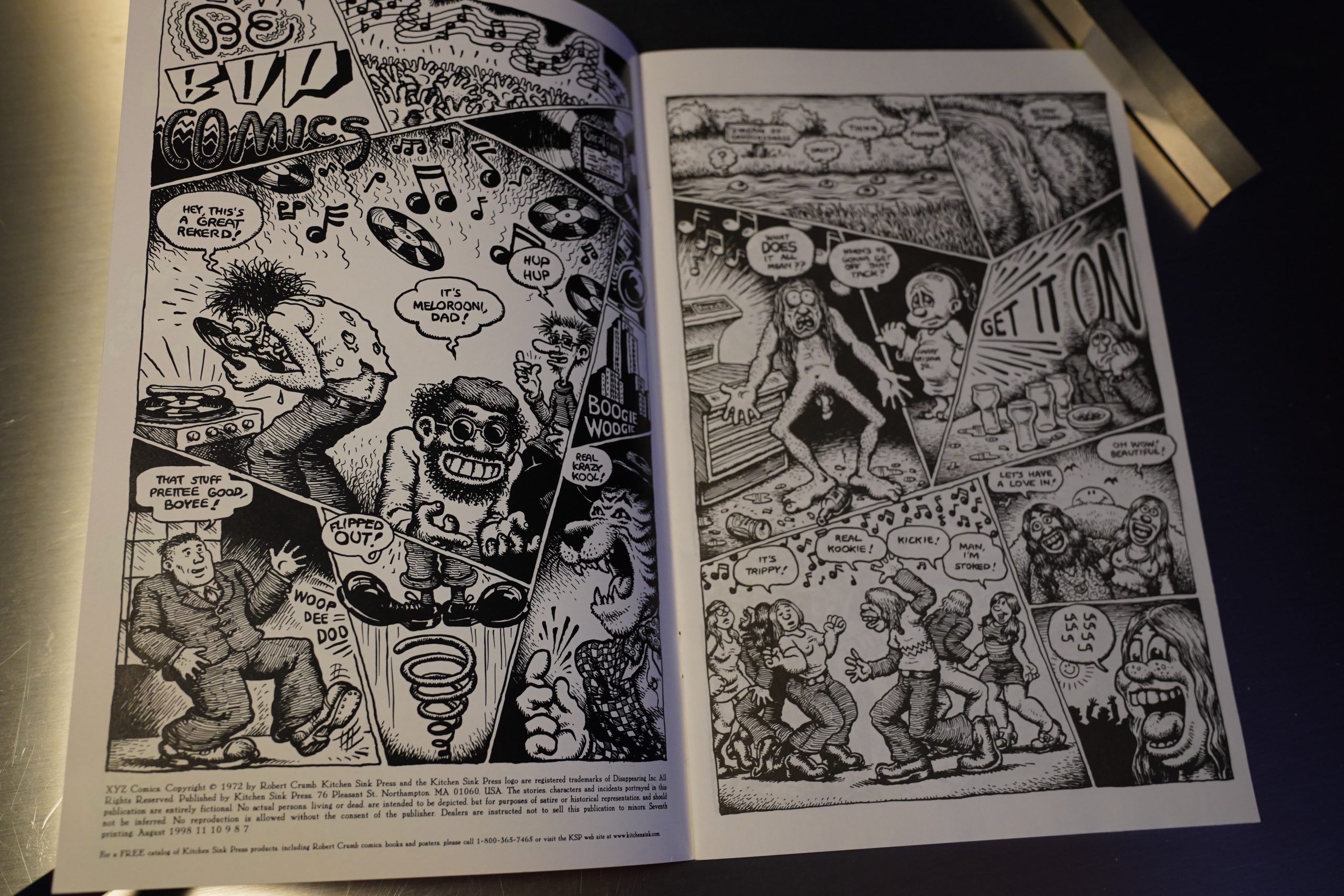 I’ve got the seventh printing — from 1998, so if Kitchen stuck to his regular plan of printing 10K a pop, this sold much less than half of the previous book. 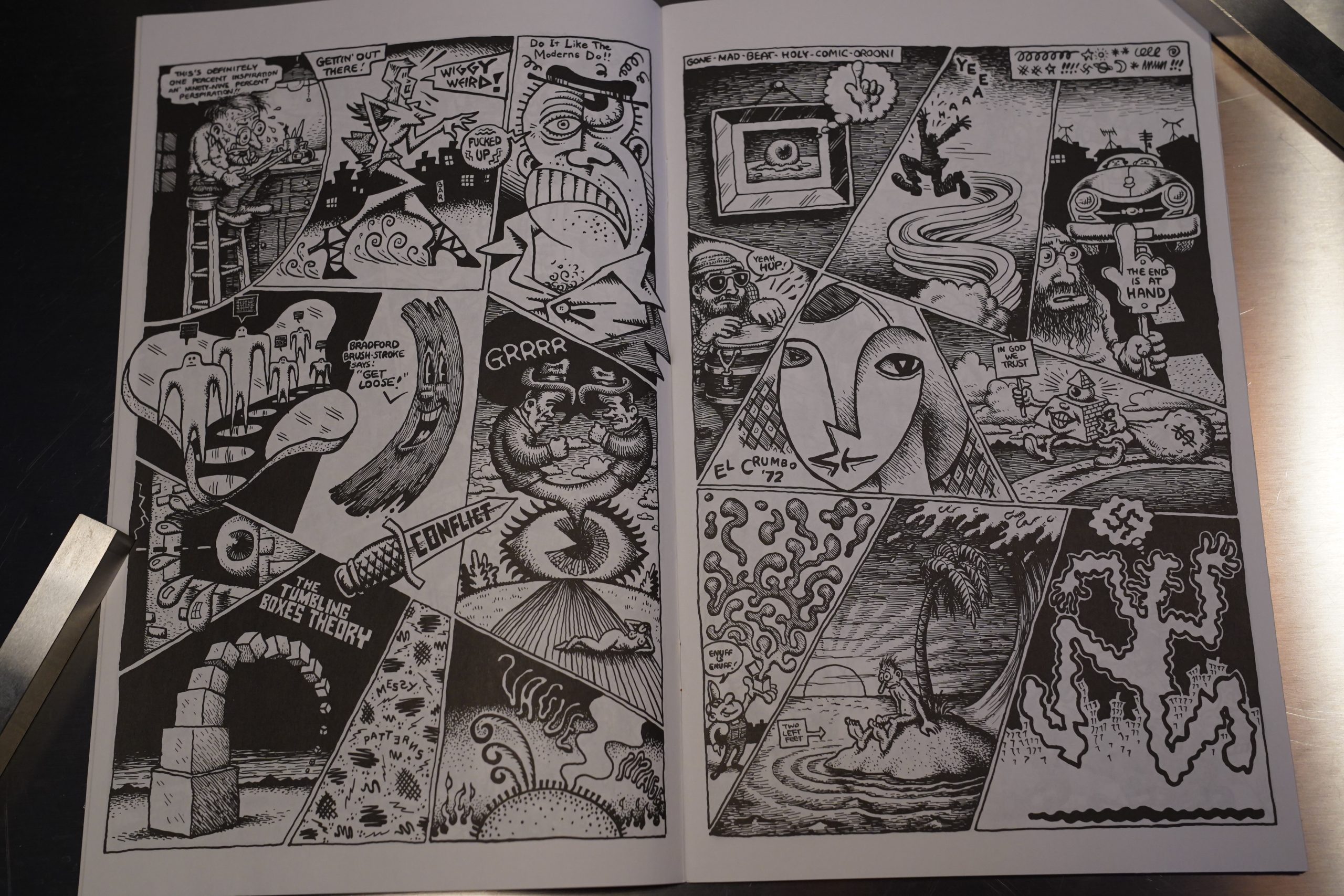 And I can understand why, because most of these 24 pages aren’t, strictly speaking, narrative. Crumb hints at a writer’s block, and we basically just get random associative imagery for the first half.

But man, such imagery. Perhaps Crumb wasn’t up to writing anything much, but this has to be just about the peak of this part of his career, cartooning wise. Every image is just… you know… interesting? And gorgeously rendered. 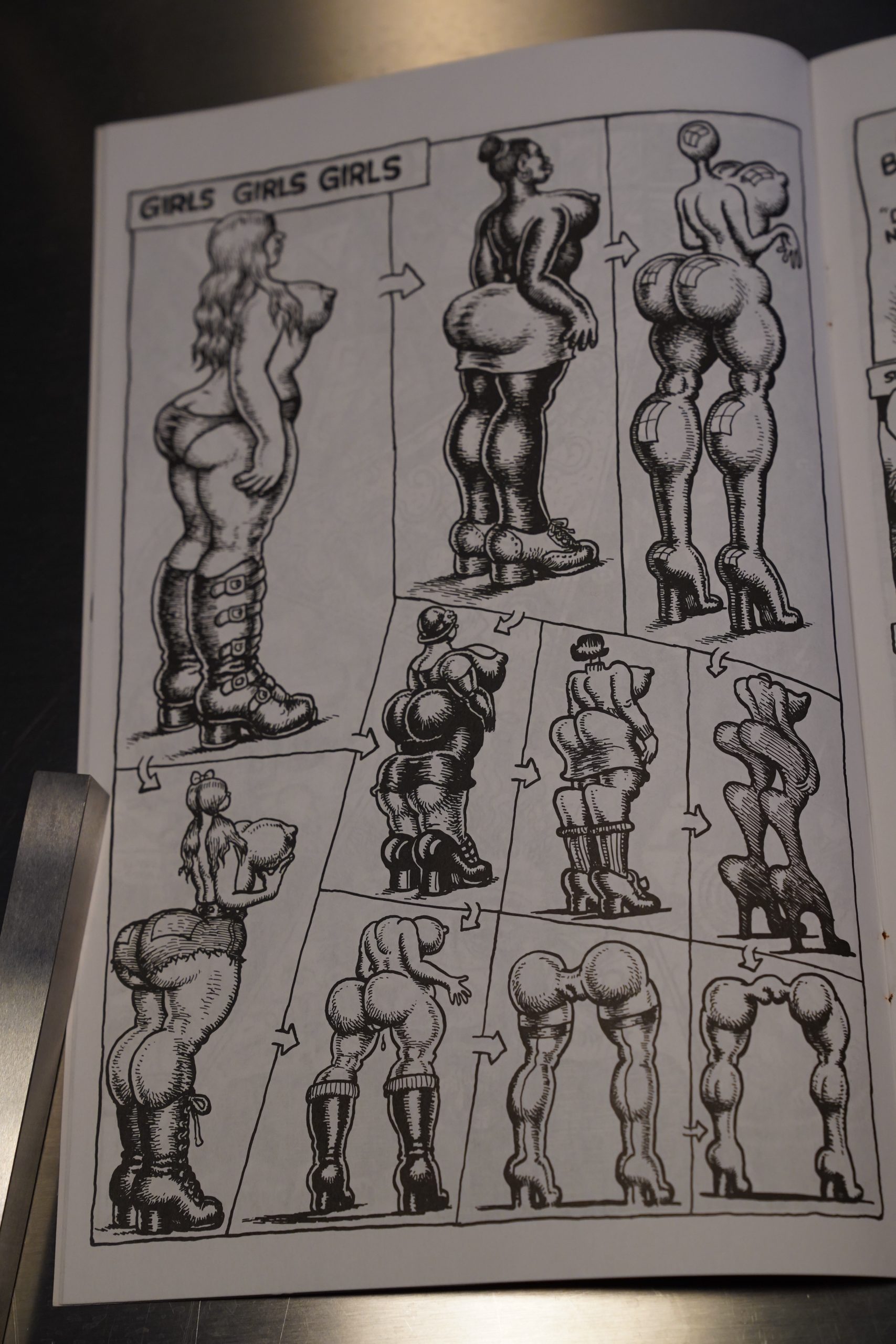 After that first associative ramble, we get a bunch of shorter pieces, some of which are narrative, and some are more… er… reductive… 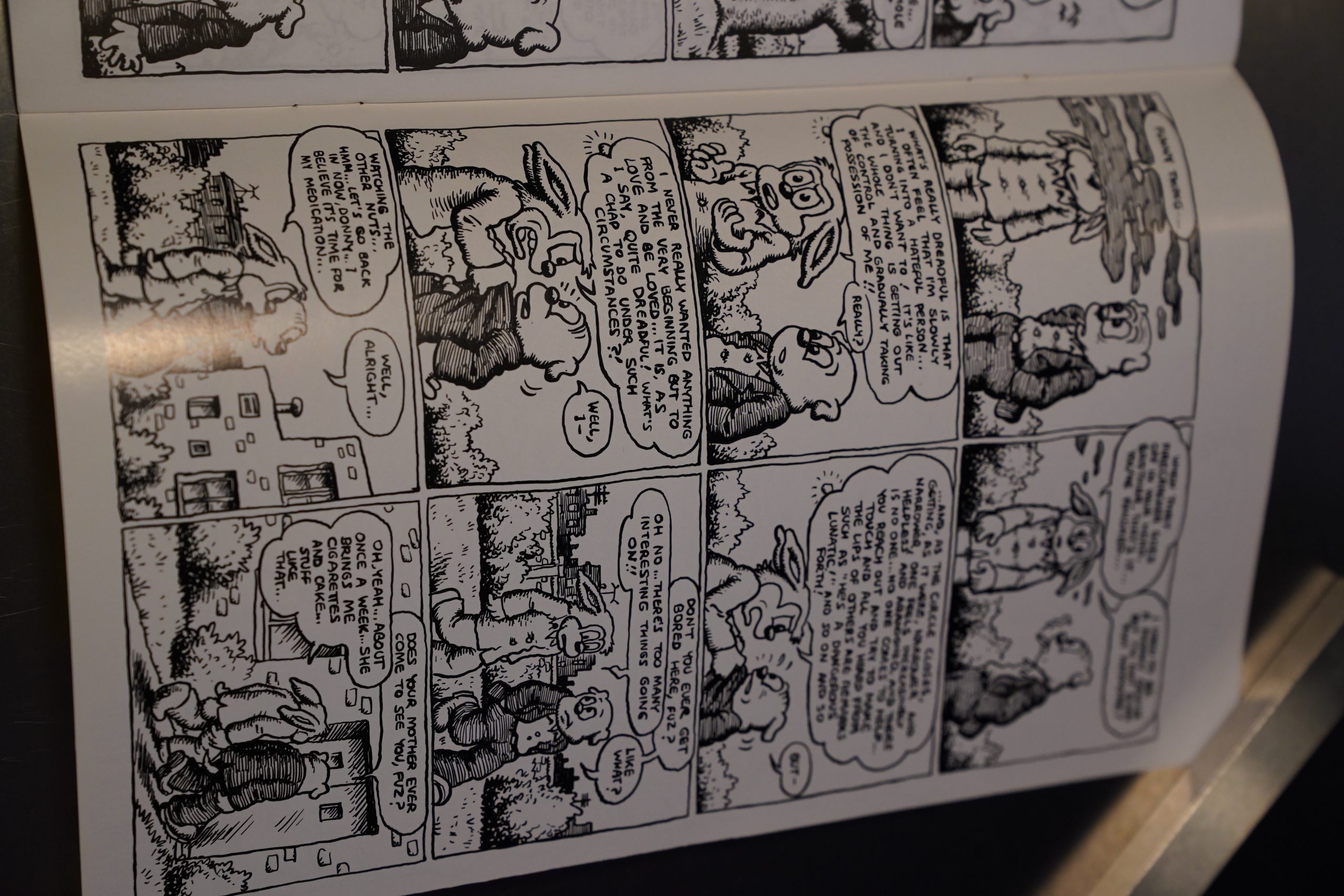 But we end the book with a story about a bunny in a psychiatric hospital, and it’s difficult not to read what he’s saying here autobiographically. At least somewhat?

Reading this book now, all these years later, is kinda thrilling? I’ve read everything here before, but in different collections, and it doesn’t quite read the same there. This slim comic book, though, is just kinda perfect? It’s a downer, but it feels so… genuine: This is what Crumb could do at this moment in time, so it’s what he did.

GR(JCH: Some Of the work of yours that I like best are
the biographies Of blues musicians.
CRUMB: Oh yeah?
GROTH: You did a great strip in Arcade…
CRUMB: What, “That’s Life”?
GROH-I: Yeah.
CRUMB: I’m uneasy with all that Arcade stuff I did. I’m
not all that crazy about it.
GROH-I: Why is that?
CRUMB: I don’t know. I did that right in the middle Of
all that shit with the taxes and all that. It was real hard
to concentrate. It was very confusing. I was just at the
point where I was quitting using drugs as a source of in-
spiration, trying to find something else. It all seems rather
uncertain. I don’t like the drawing style that much. It was
in-between, or something. The stuff I was doing in the
late ’60s is so much more assured and confident than that
stuff in the mid-’70s. The ’70s are the lost decade for me.
GROTH: Probably for everybody It that kind of
decade.
CRUMB: Actually, it was still the ’60s lifestyle, mystic
hocus-pocus, a lot of loose sex—
GROTH: only until about ’73.
CRUMB: Oh, further than that. The loose sex thing went
on pretty much up to the end of the ’70s.
GR(JI’H: 171ere bus a real conservative backlash, though.
CRUMB: Oh yeah, the conservative backlash certainly
started around then. Most younger people were still liv-
ing Off the energy Of the ’60s. A very confusing time to
me. Like I said, it took me eight years to figure out how
to deal with celebrity and the money thing and all that
stuff and get my feet back on the ground. All those com-
ics I turned out in the early ’70s—Hytone, Uneeda, XYZ,
Black and White—I look at all those now and I’m not real
happy with them. I like the early Zaps. first two issues
of Zap, and a lot of the stuff I did for underground papers
around that time I still really like when I look at it. But
all that stuff coming totally out of acid visions. There
was no doubt. I sat down and it just drew itself, so it has
a certain power. There wasn’t a lot of ego interference
or qualms or doubts about what I was doing. But there
was later. I really felt myself being thrown off the track
around 1969 and ’70. I could feel myself getting thrown
for a loop by all the craziness that suddenly flooded into
my life. It was dizzying. I was loosing that sureness about
what I was doing with my work, that kind of sure footing
you have when you’re on the track. You’re never that sure
of what you’re doing with it, but at least you know when
you’re on the track. Right now I feel like I’m on the track.
For a while I was just floundering around. Fucking ’70s.
[laughs]

This is the seventeenth post in the Entire Kitchen Sink blog series.