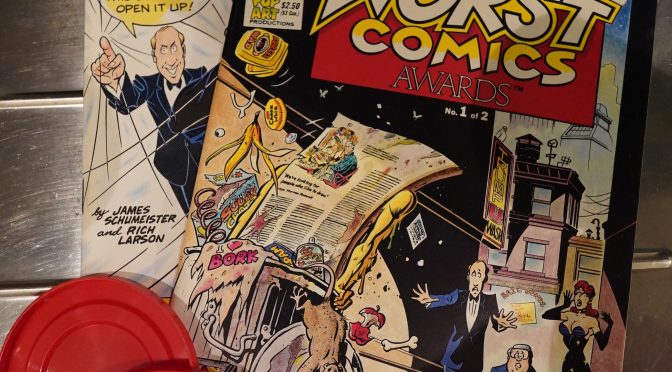 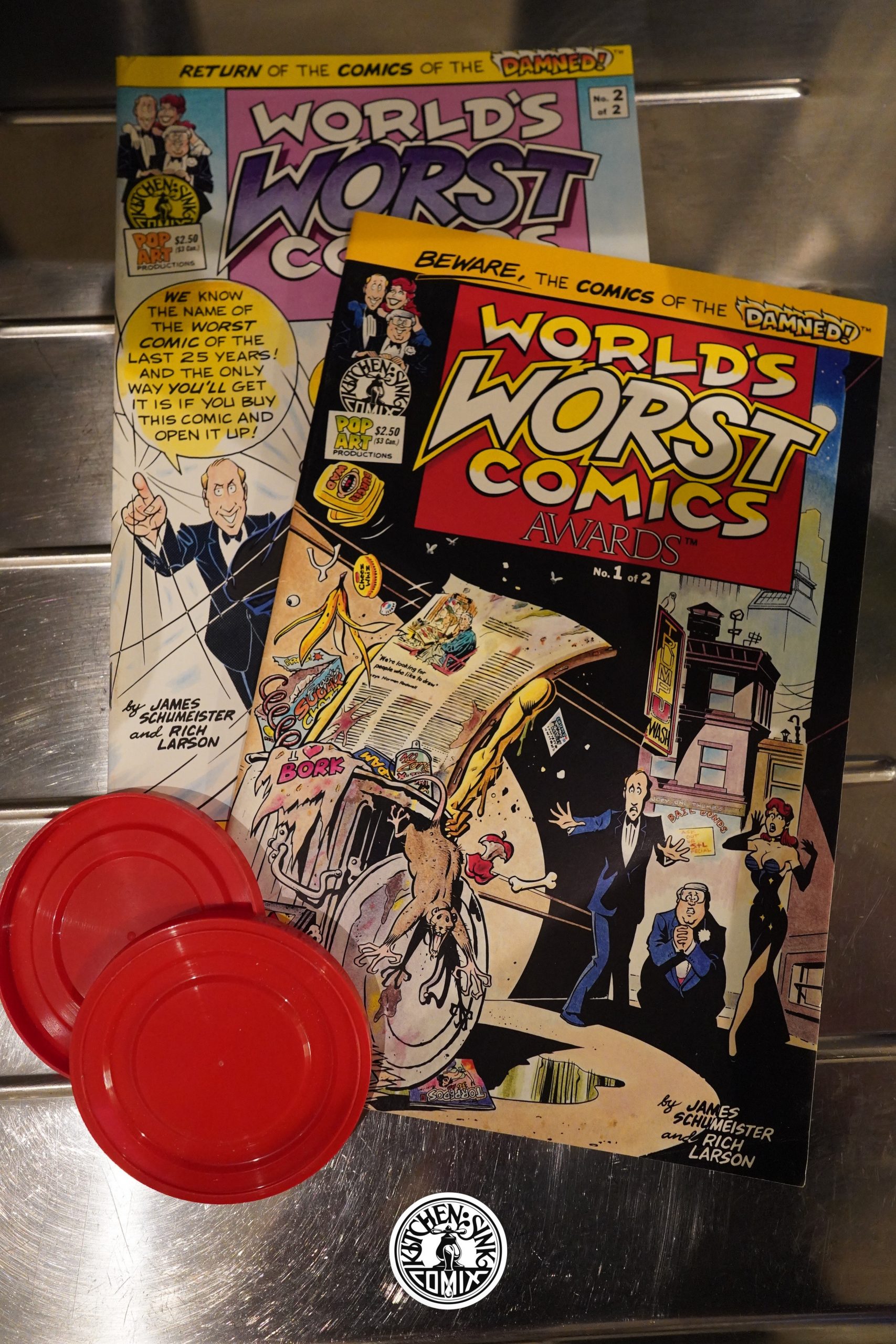 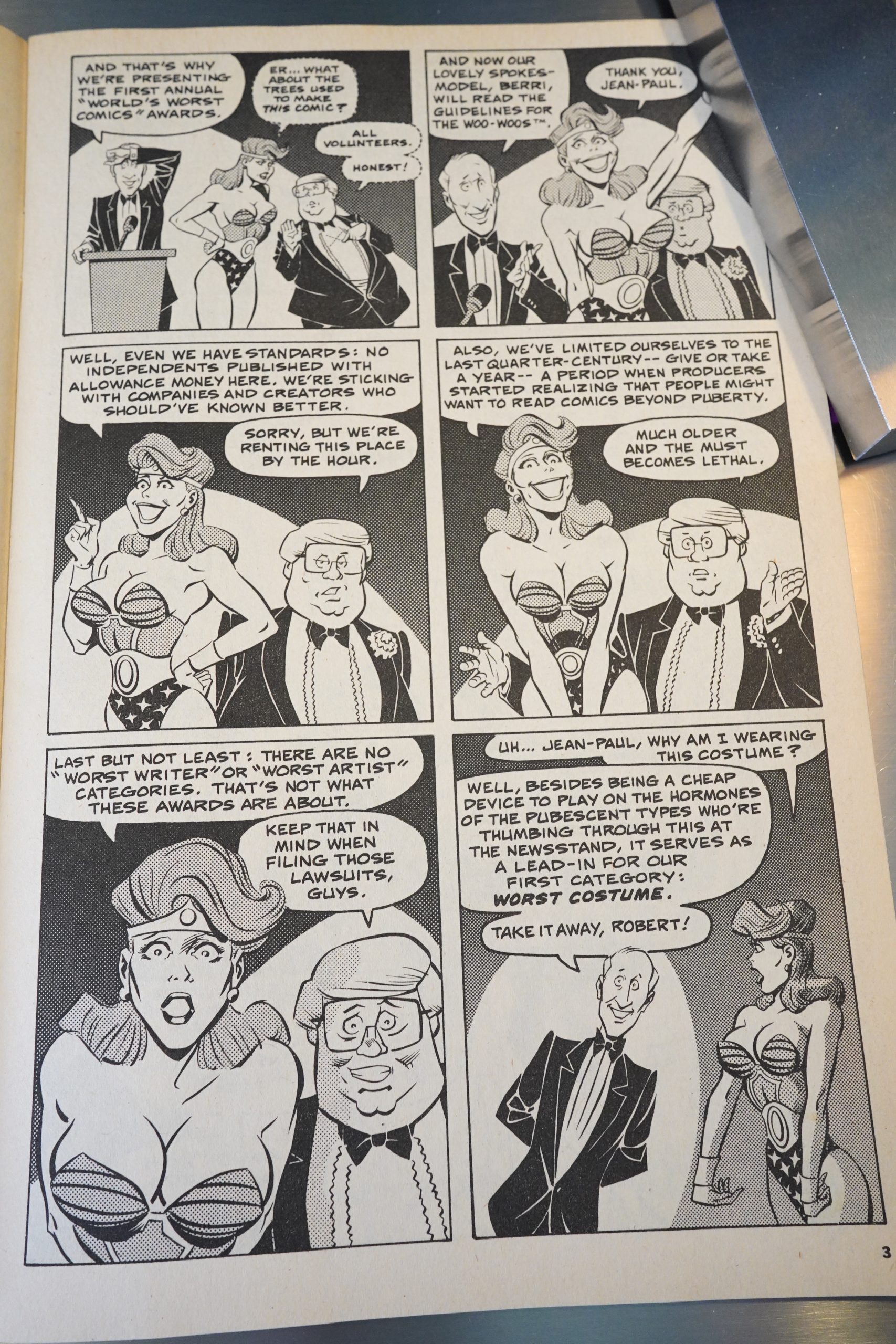 A comic book about bad comics sounds like an excellent idea — there’s certainly enough of them to go around. The authors explain that they’re not going to rag on independents published on a low budget… and the first issue is mostly gently poking fun at DC/Marvel super-hero comics. 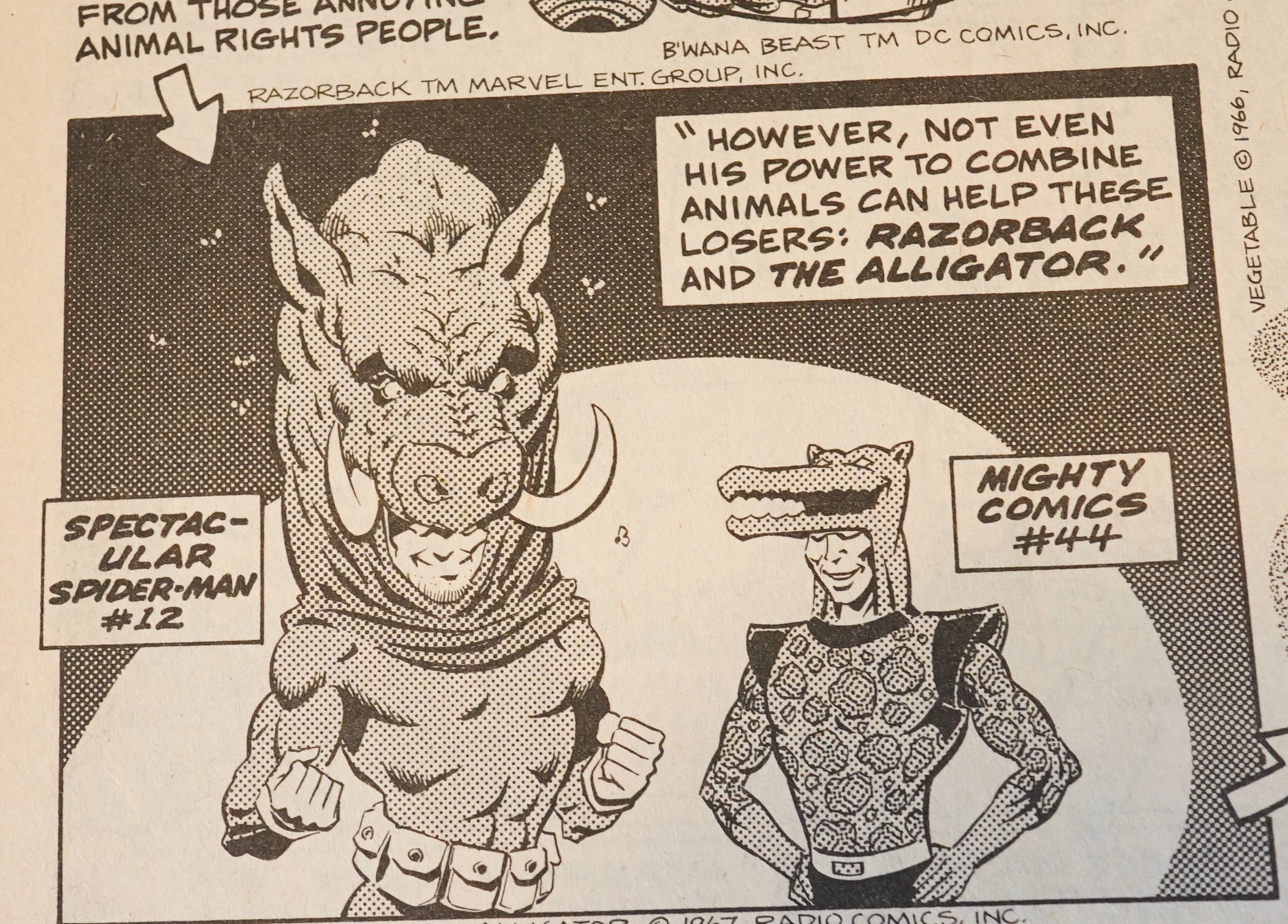 Almost everything is redrawn for this book, so it’s hard to say how ridiculous these characters were. 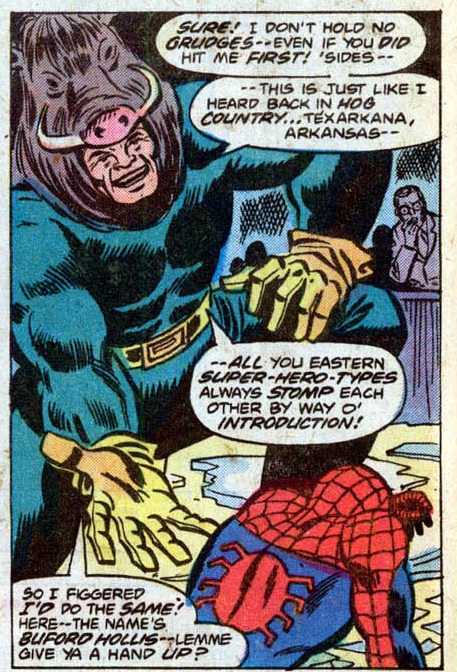 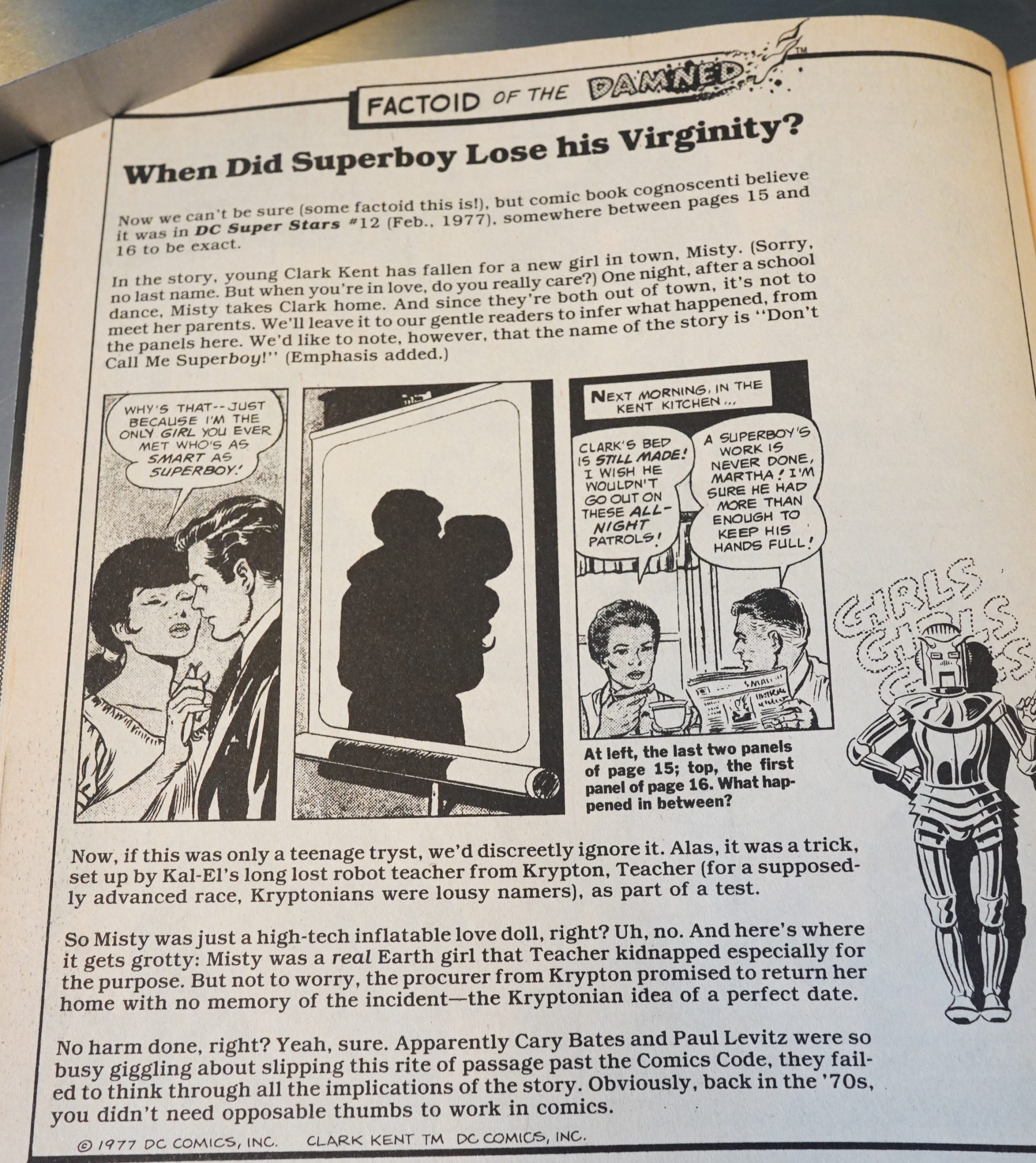 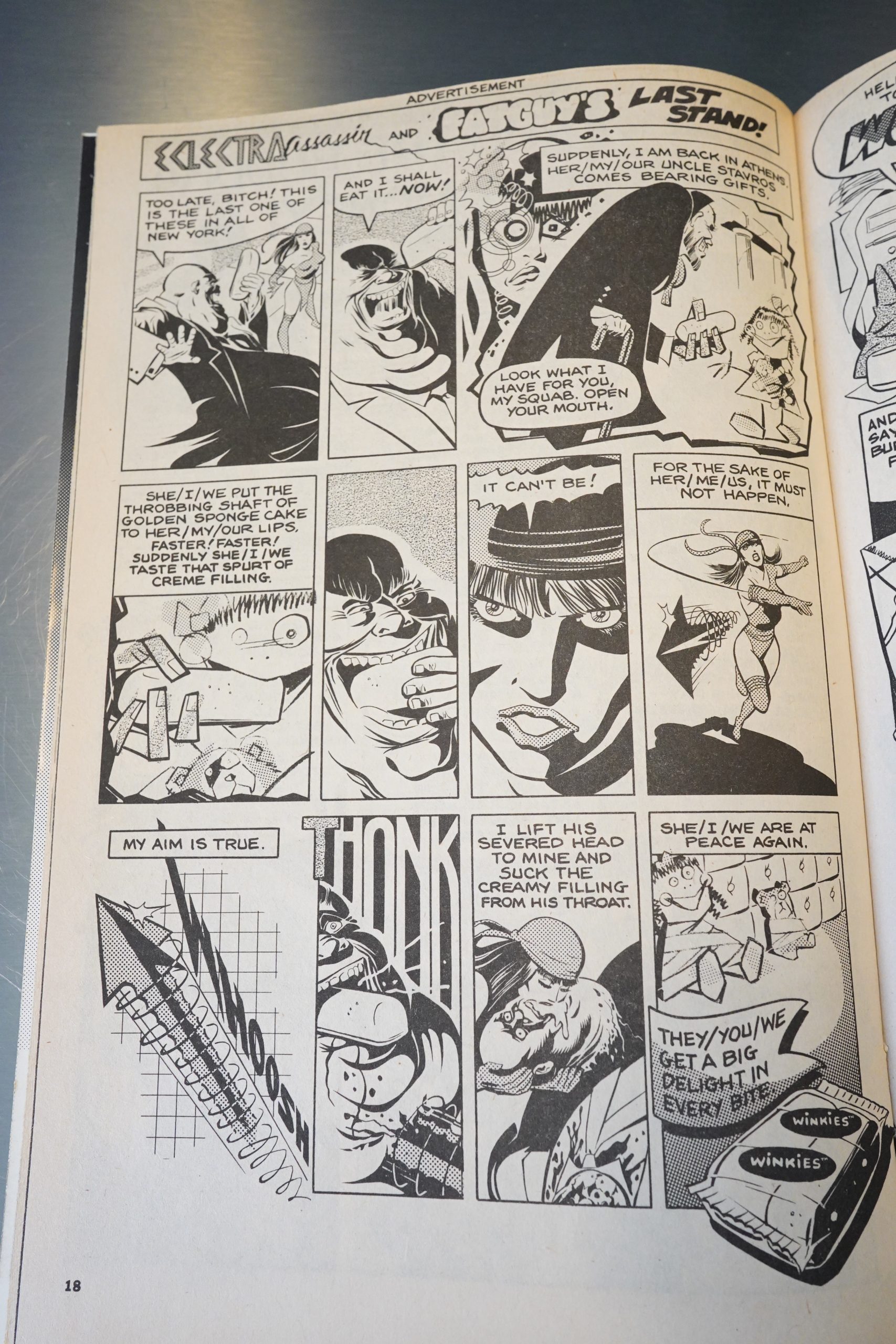 The first issue’s pretty good? They vary their approaches a bit, so here we get how they’d imagine a contemporary Hostess Twinkies ad would look like. Seems accurate! 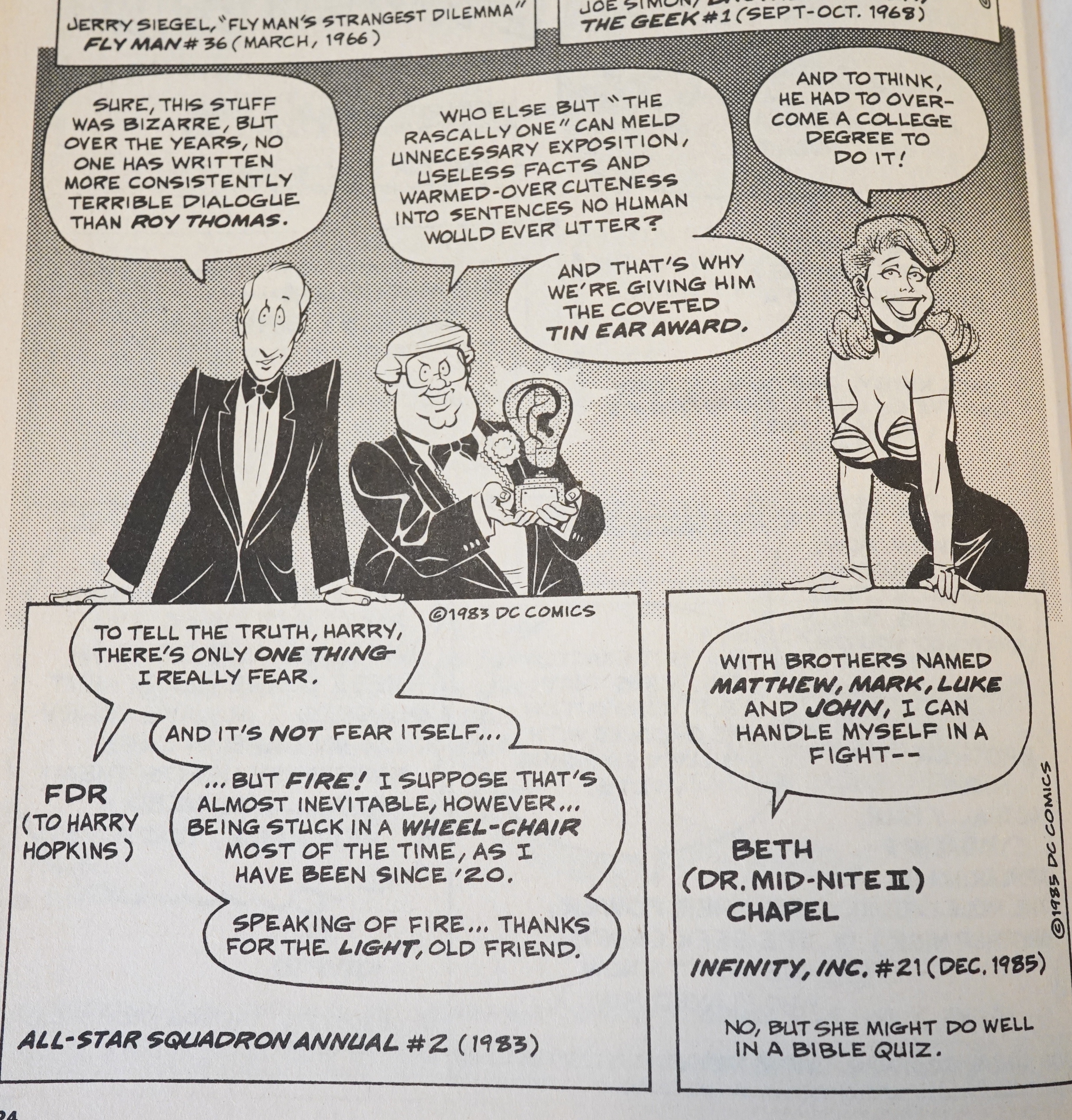 And they said they wouldn’t target writers/artists, but they don’t really keep that promise. 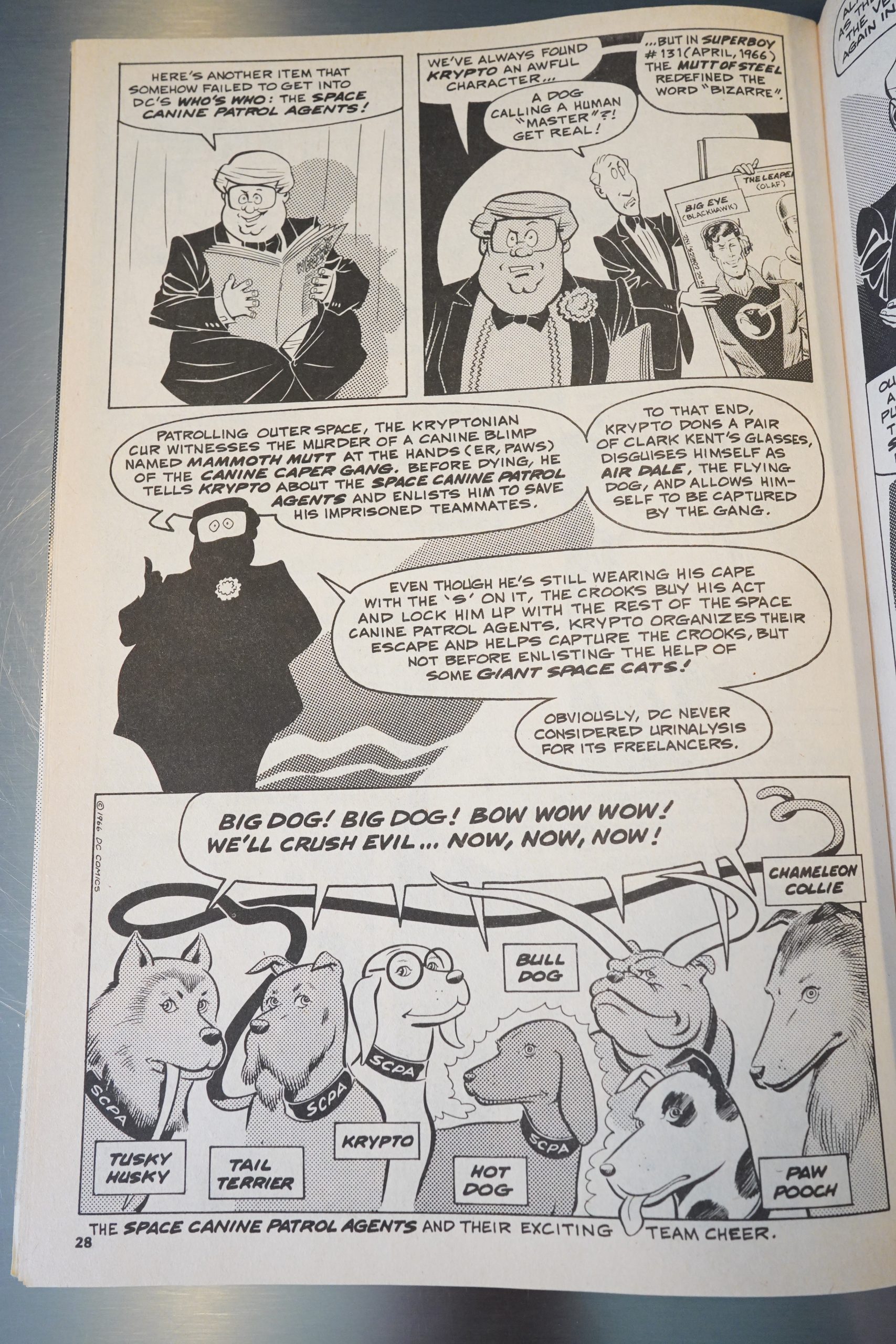 They run out of ideas, though, and are reduced to recapping silly old comics to not very humorous effect. 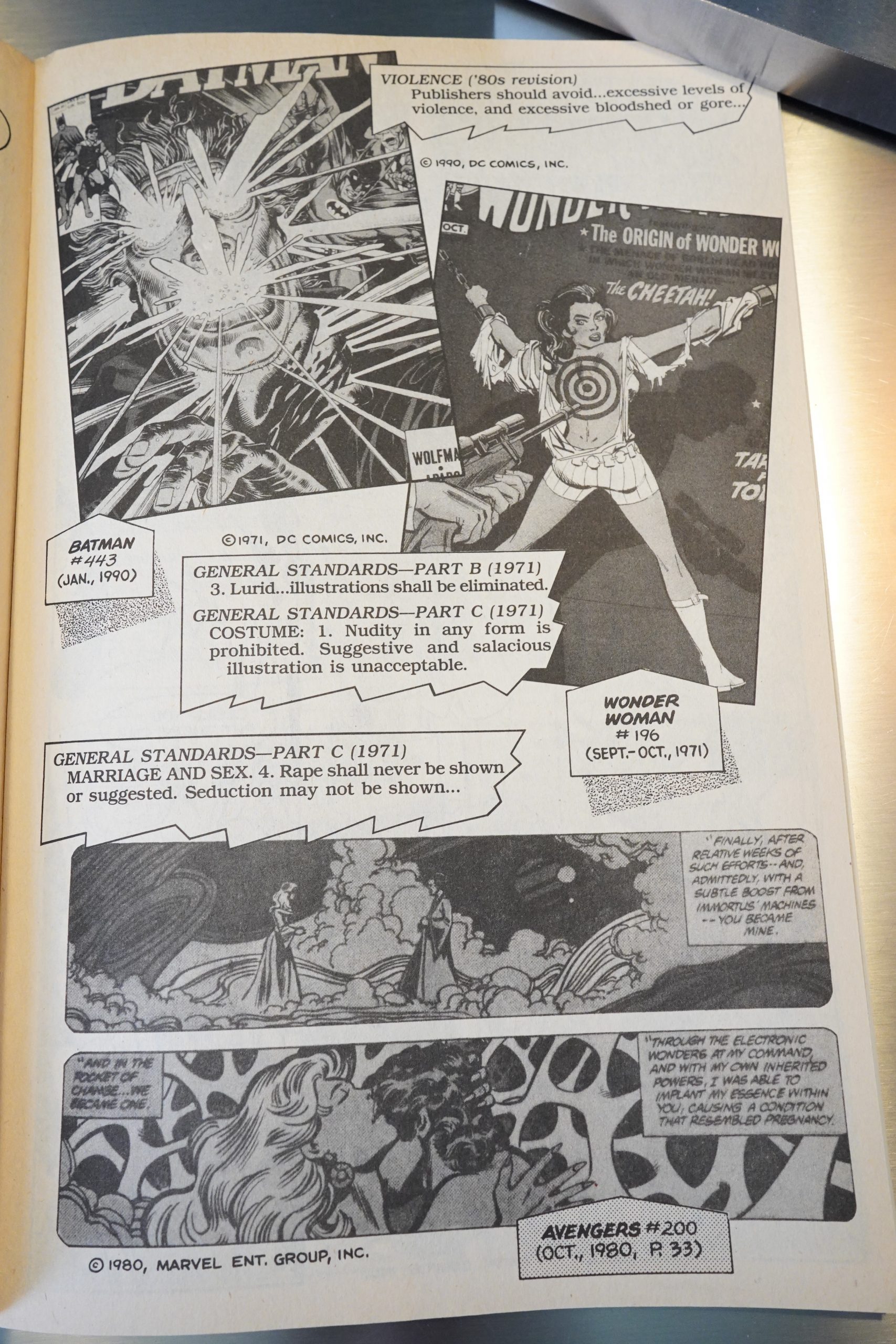 The second issue was polybagged, allegedly to keep the sheer suspense of who they deemed the worst comic up. But I’m wondering whether it really was to stop people having a gander at how they phoned this issue in.

As opposed to the first issue, they print a lot of excerpts from old comics. 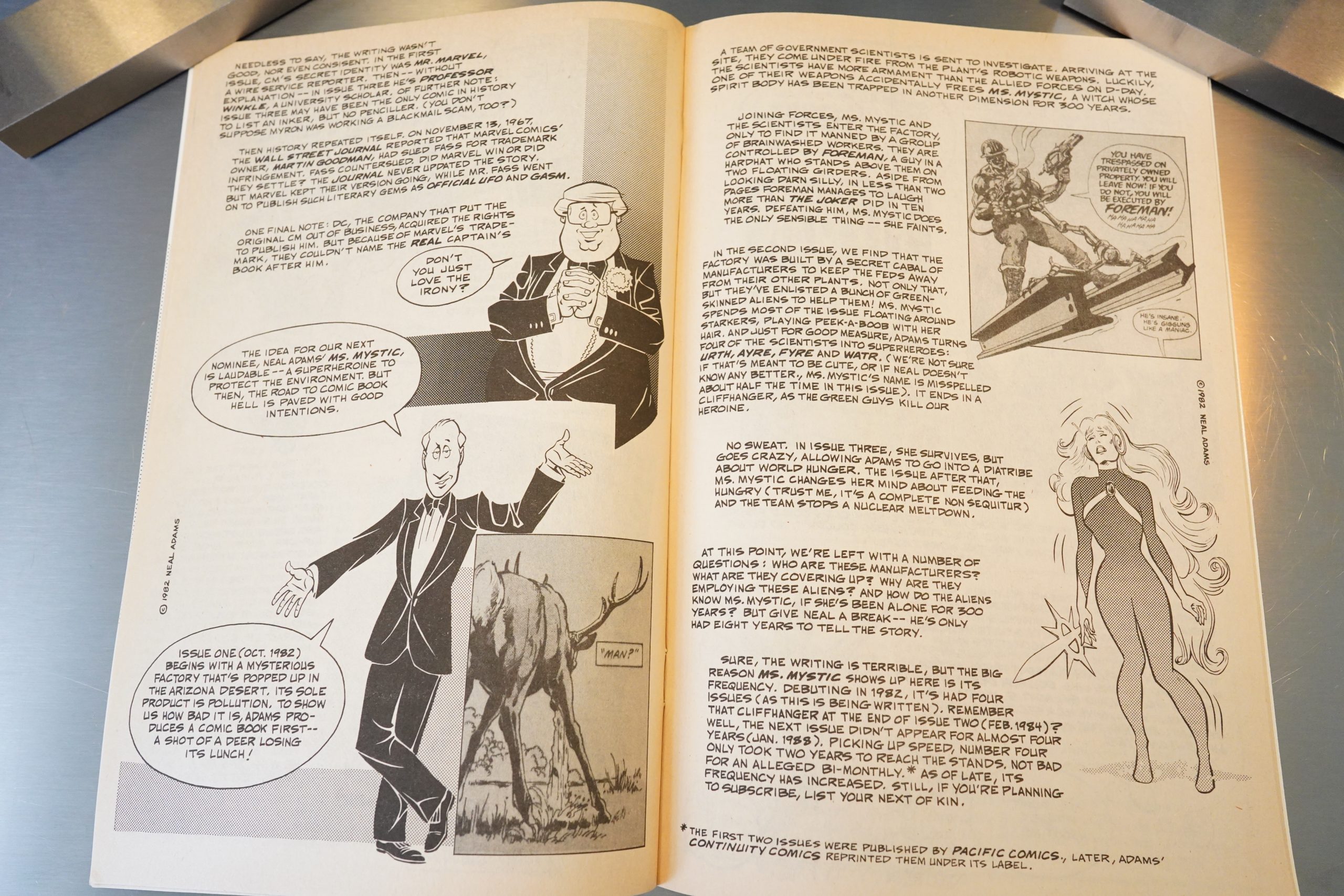 Then there’s pages and pages of straight-up recapping, and that shit is tedious as hell. 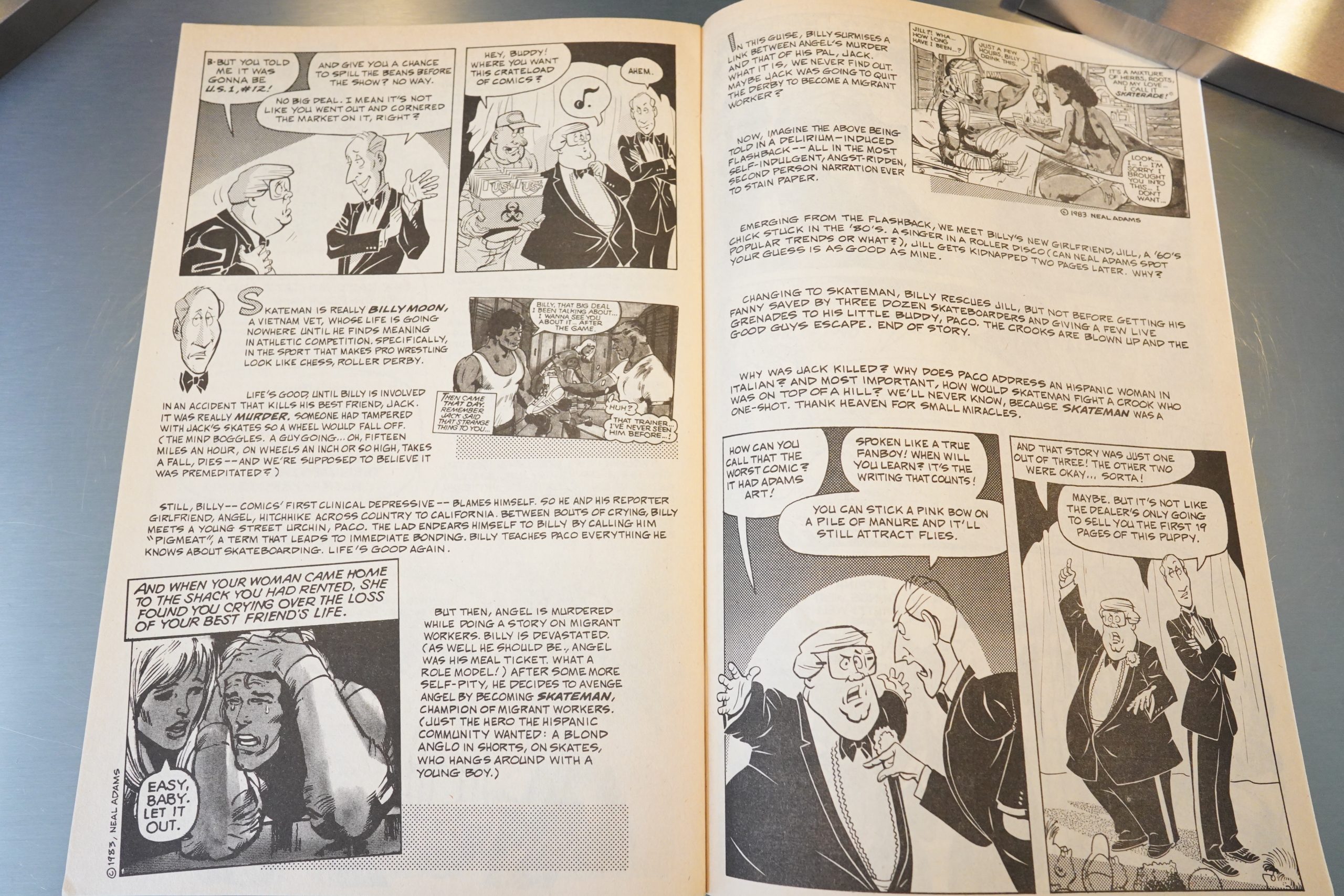 Finally, we get the top ten worst comics, and most of them are from obscure 60s publishers. DC/Marvel is represented by a single book: Brother Power, The Geek, predictably enough, and the worst comic book ever is…

Skateman, by Neal Adams and published by an independent publisher, Pacific Comics. And as I said in that blog article about Skateman, the derision that book suffers from is extrinsic to the book itself: It’s not a good book, by any means, but it’s not particularly bad, as these things go. 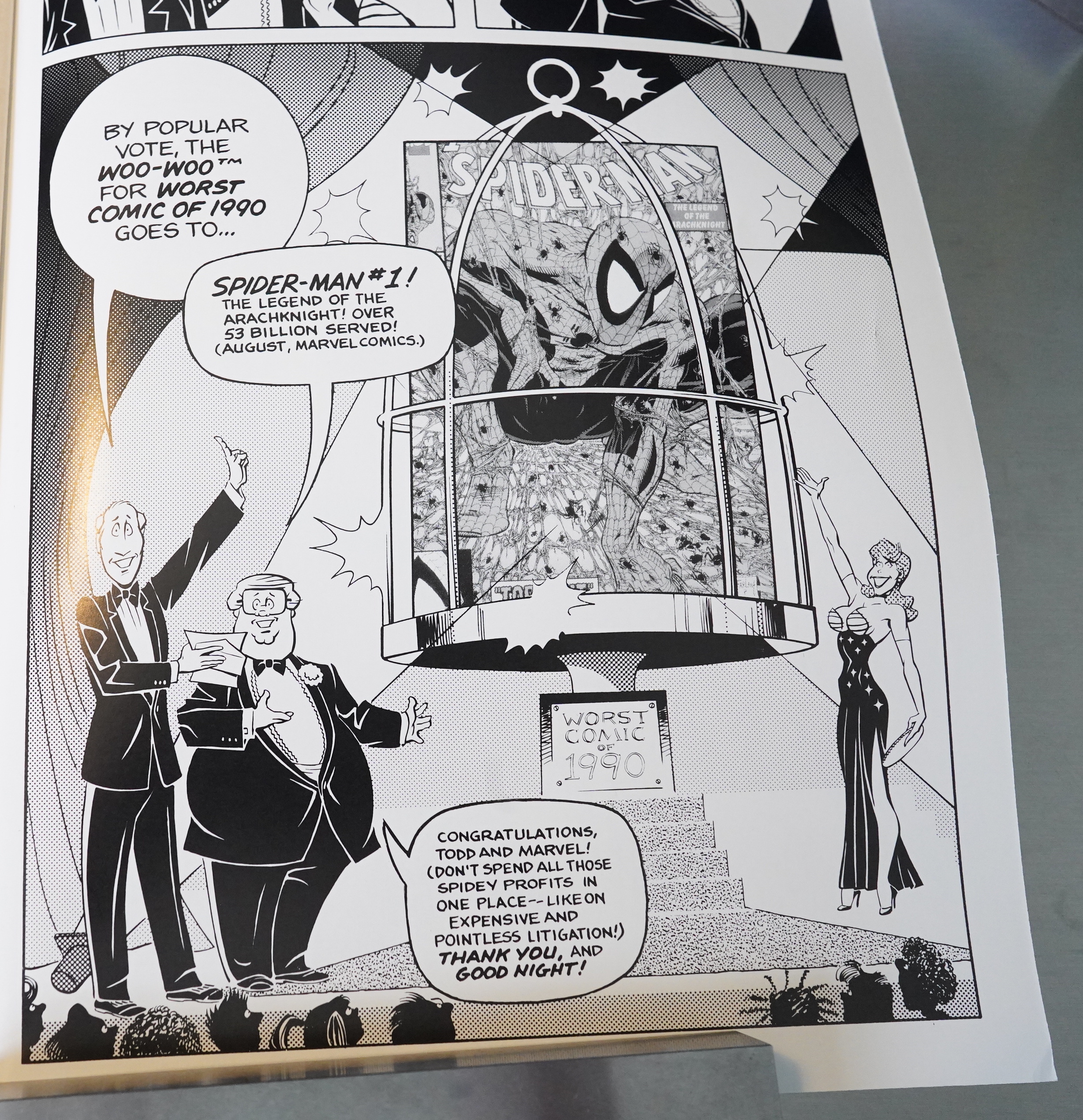 Oh, and people could write in to crown the year’s worst book, and Spider-Man #1 won.

Though reportedly inspired by
moviedom’s Golden Tizrkey Awards,
the spirit and format of this comic
book remind me more of any number
of award show parodies done down
through the years by MAD magazine.
And that ain’t necessarily bad.
In the first of this two-issue series,
we get the awards for Worst Male
Costume, Worst Female Costume,
Bad Ads, Worst Name, Woefully
Wretched Words (though there is ac-
tually no winner named in this cate-
gory), and Worst Team.
For any individual reader, there are
obviously problems with this ap-
proach since we all have different
tastes and perspectives on what is bad
and what isn’t. One can be amazed
that some of one’s own personal “fa-
vorites” have been inexplicably omit-
ted or that some of the selections don’t
seem all that bad, really. Still, there
is a perverse pleasure in viewing this
parade of silliness—it all seems to be
just plain, goofy fun.
Some ground rules are set for the
“Independent” comics are
awards.
excluded; they’re only going after the
big guys. Still, they do go after some
outfits who were operating in relative-
ly unfamiliar territory, such as the
1960’s excursion into super-hero com-
ics by Radio Comics. (I was a bit dis-
appointed that the winners and nomi-
nees were almost exclusively drawn
from the genre of super-hero comics.
But then, given the nature and prev-
elance of super-hero comics, I guess
it isn’t so strange!) They also limited
themselves to just the past 25 years,
but that luckily allowed them to in-
clude the fruit of the 1960s camp
craze.
Finally, there was absence of awards
like Worst Writer and Worst Artist.
However, they weren’t above bashing
individuals when they felt it warrant-
ed, such as giving Steve Ditko the
“Lifetime Achievement” designation
for “Bad Names” and presenting Roy
Thomas with the Tin Ear Award for
his dialogue.
Highlighting unworthy work in
comics is a little mean-spirited and
disturbing, but the atmosphere of
good-natured and even sympathetic
fun here, finally, is quite winning.
There’s nothing deep or significant
here, but as long as it doesn’t eventu-
ally descend into vindictive name-
calling, it’s a harmless bit of fun.

This is the one hundred and twenty-fifth post in the Entire Kitchen Sink blog series.