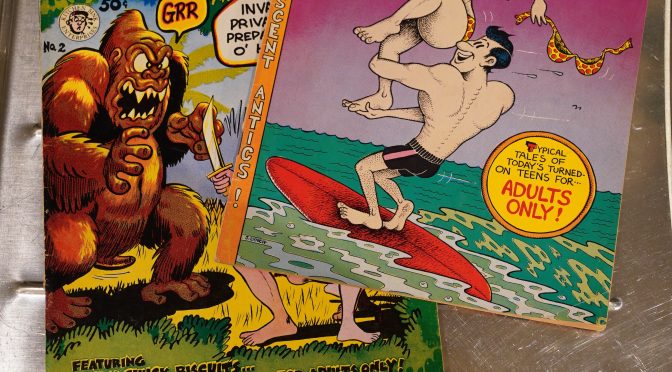 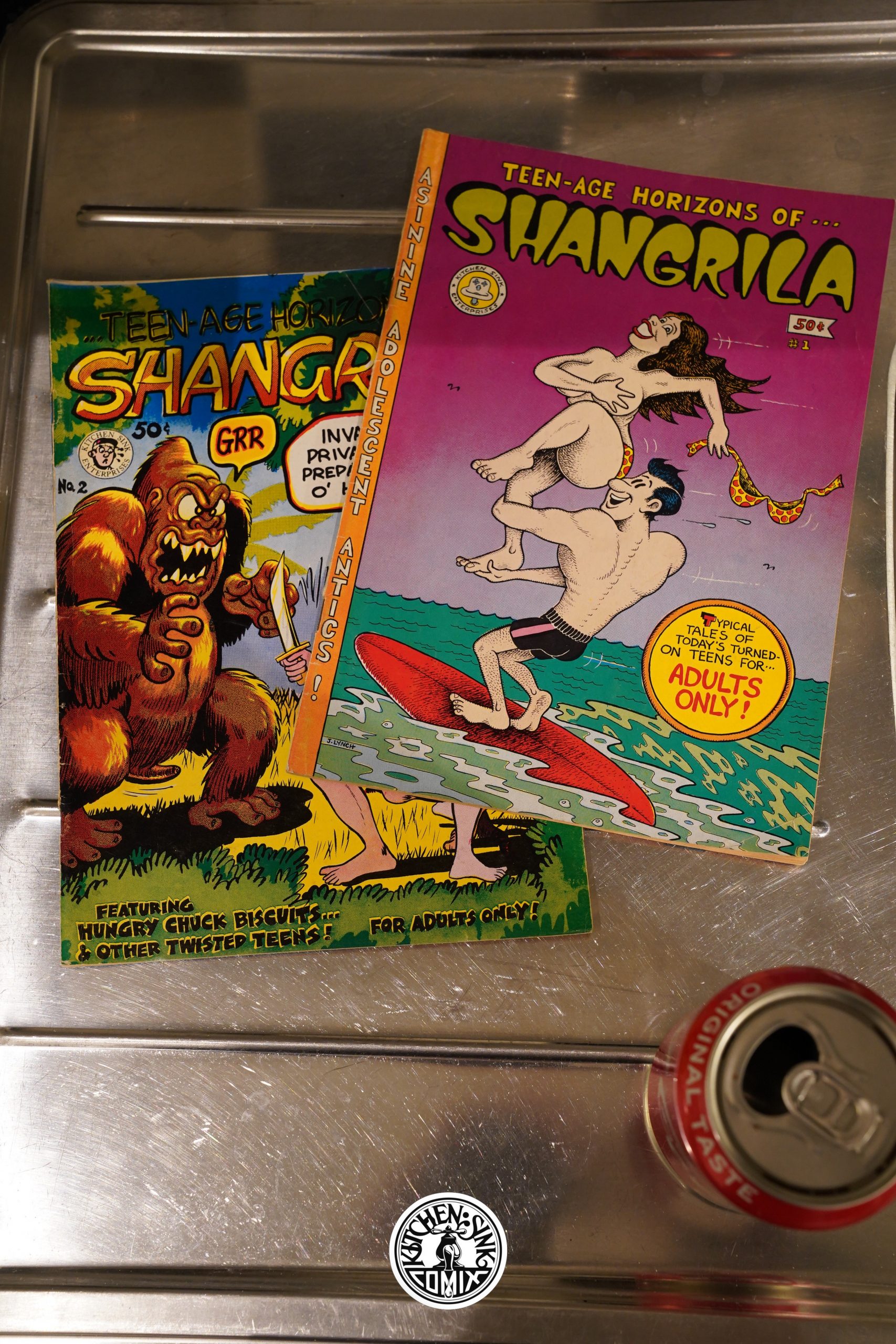 The anthology was the primary underground comix medium, wasn’t it? Comics anthologies didn’t really sell in the later direct comics market, but there was a buttload of them around this time, and I’ve never seen anybody try to explain why.

Perhaps it’s the inspiration from Mad Magazine? That is, most of the underground comix were humour comics, so going for shorter pieces seems natural, and doing anthologies meant that you could produce the books much faster. Can do a handful of pages between toking and partying. 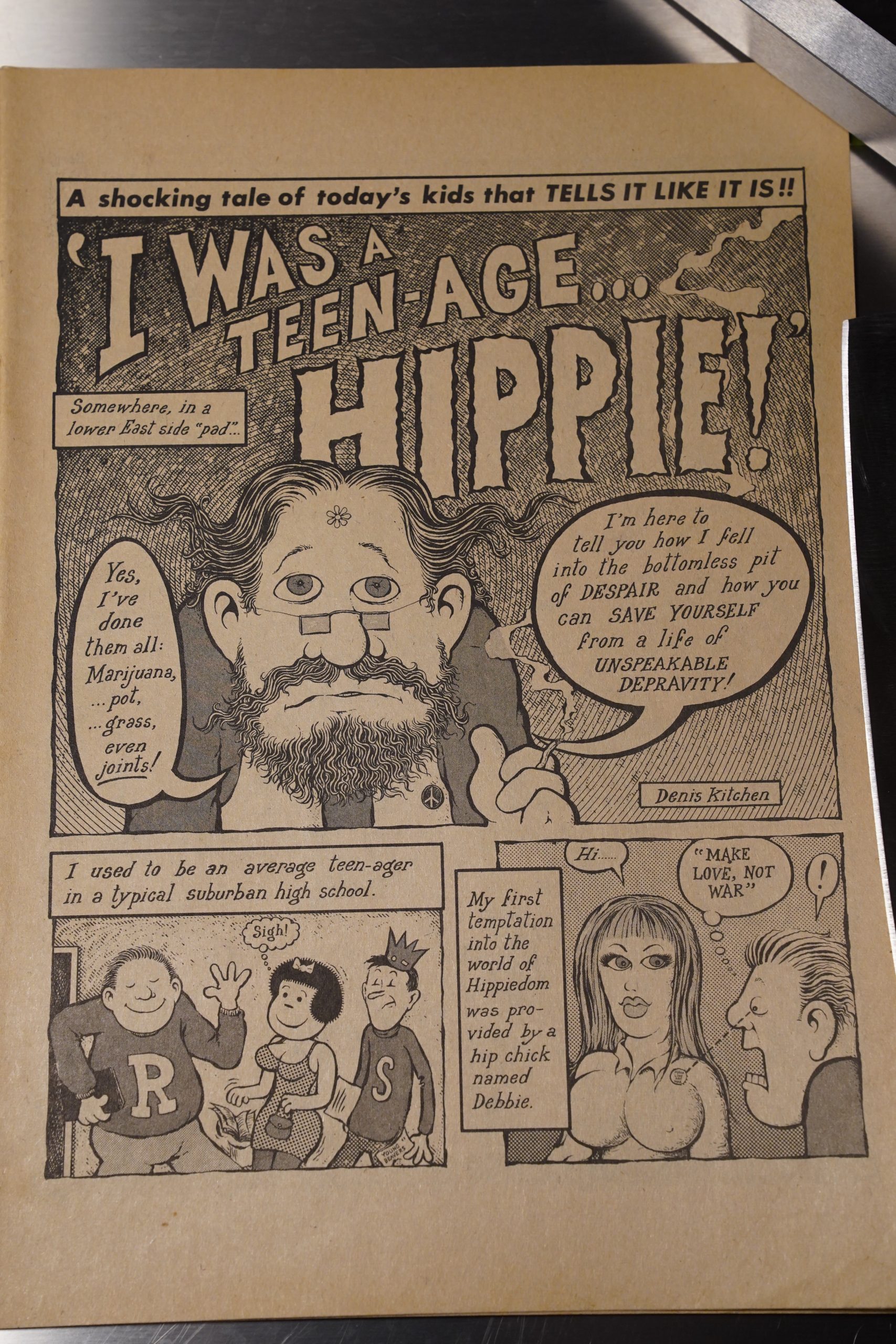 On the other hand, perhaps this is what the readers preferred: These are perfect for reading at parties, too. 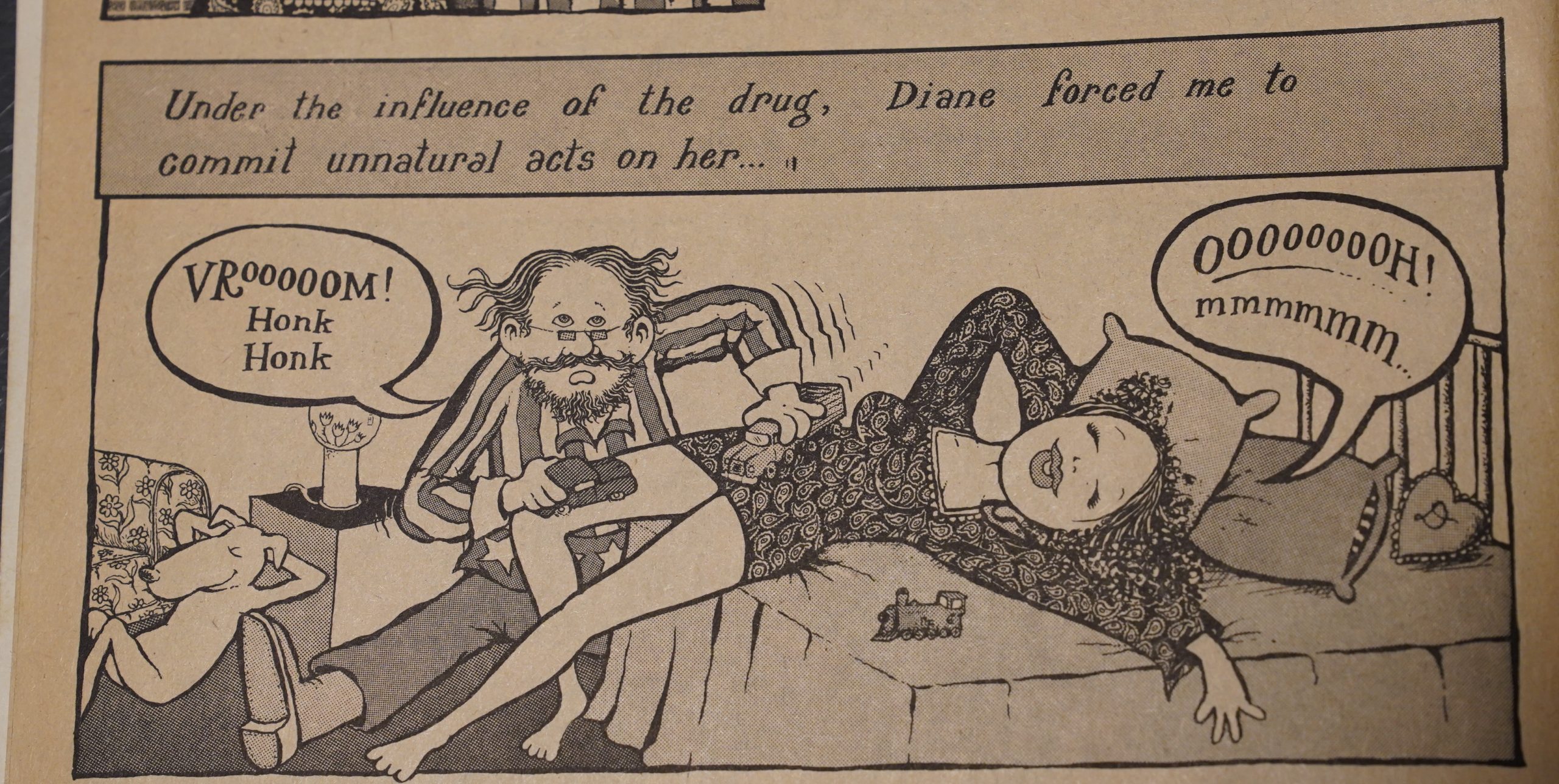 This one starts off with a piece by Denis Kitchen about the horrible path drugs has led him down. 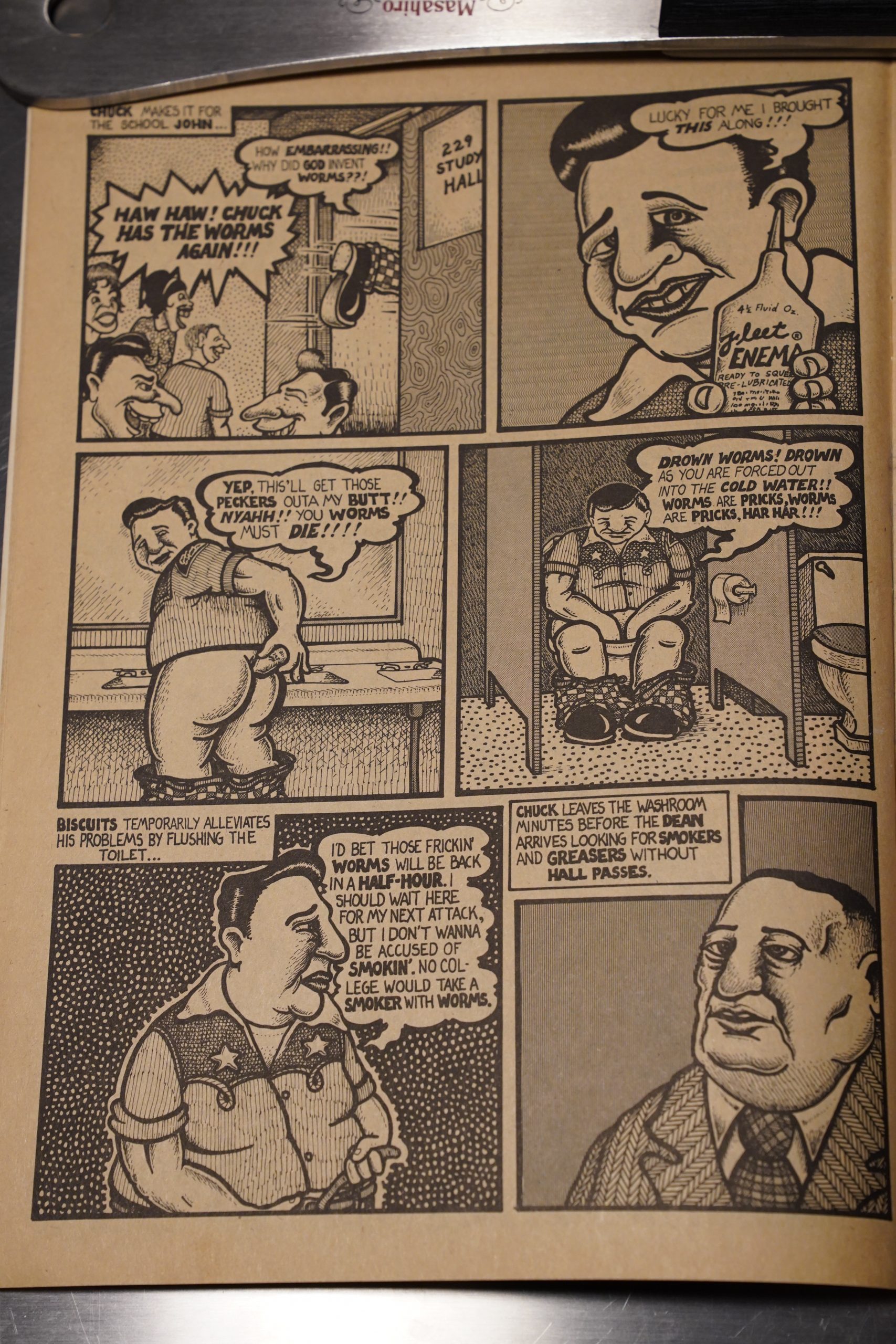 Undergrounds were into shocking people, but Kitchen was doing “milder” comics in the mid-west than the sex-and-violence saturated books from the left coast, so… what do you do? Dan Clyne does the most shocking story ever seen in a comic book: It’s about worms.

It’s such a weird flex that I’m wondering what the reaction to this was. I mean, reading Zap, you’d go “right aaawn!” or “whee hoo!”, and this is more “what the… what the!” 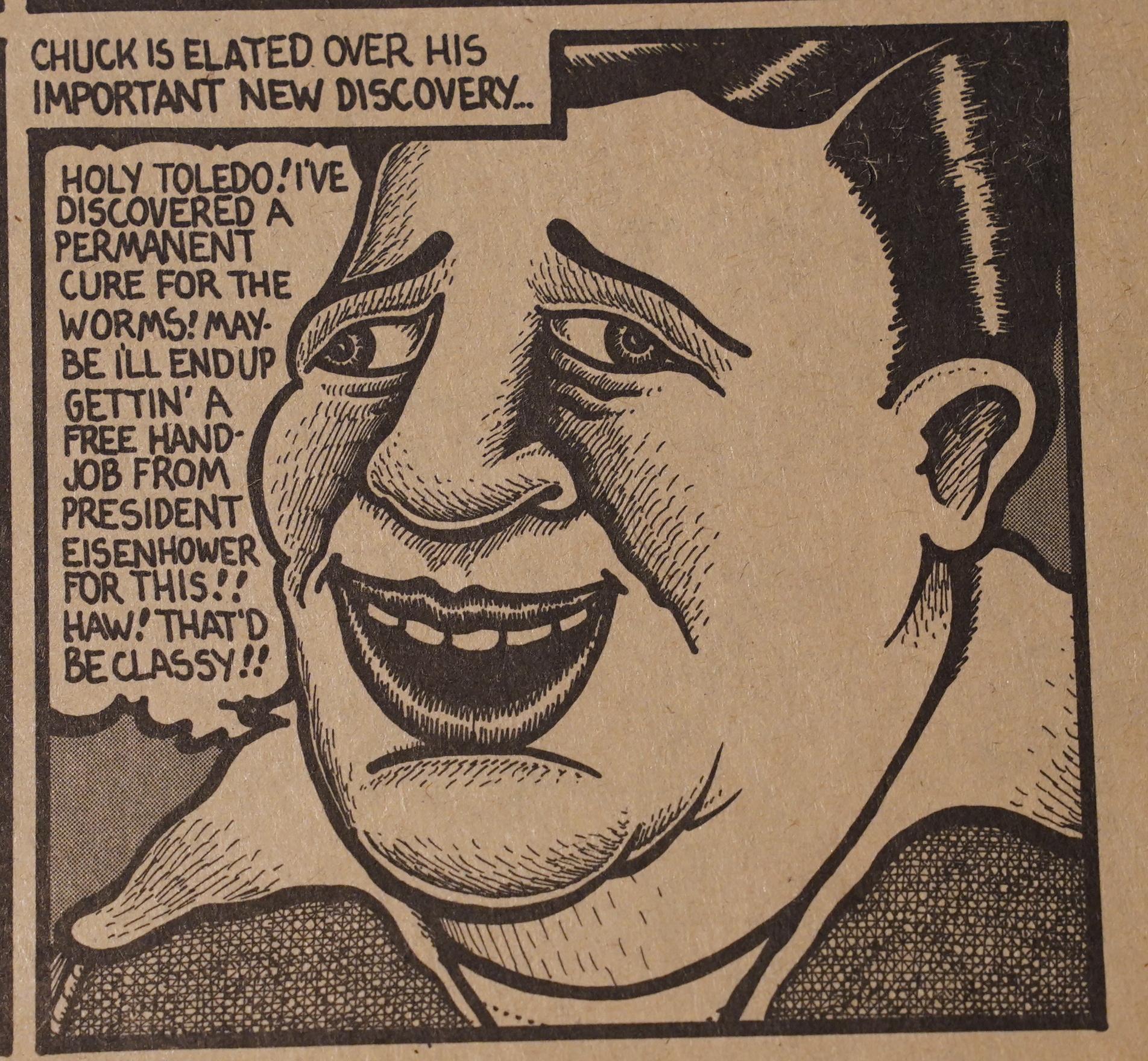 It’s the most deranged thing ever, and I support this comic 100%. 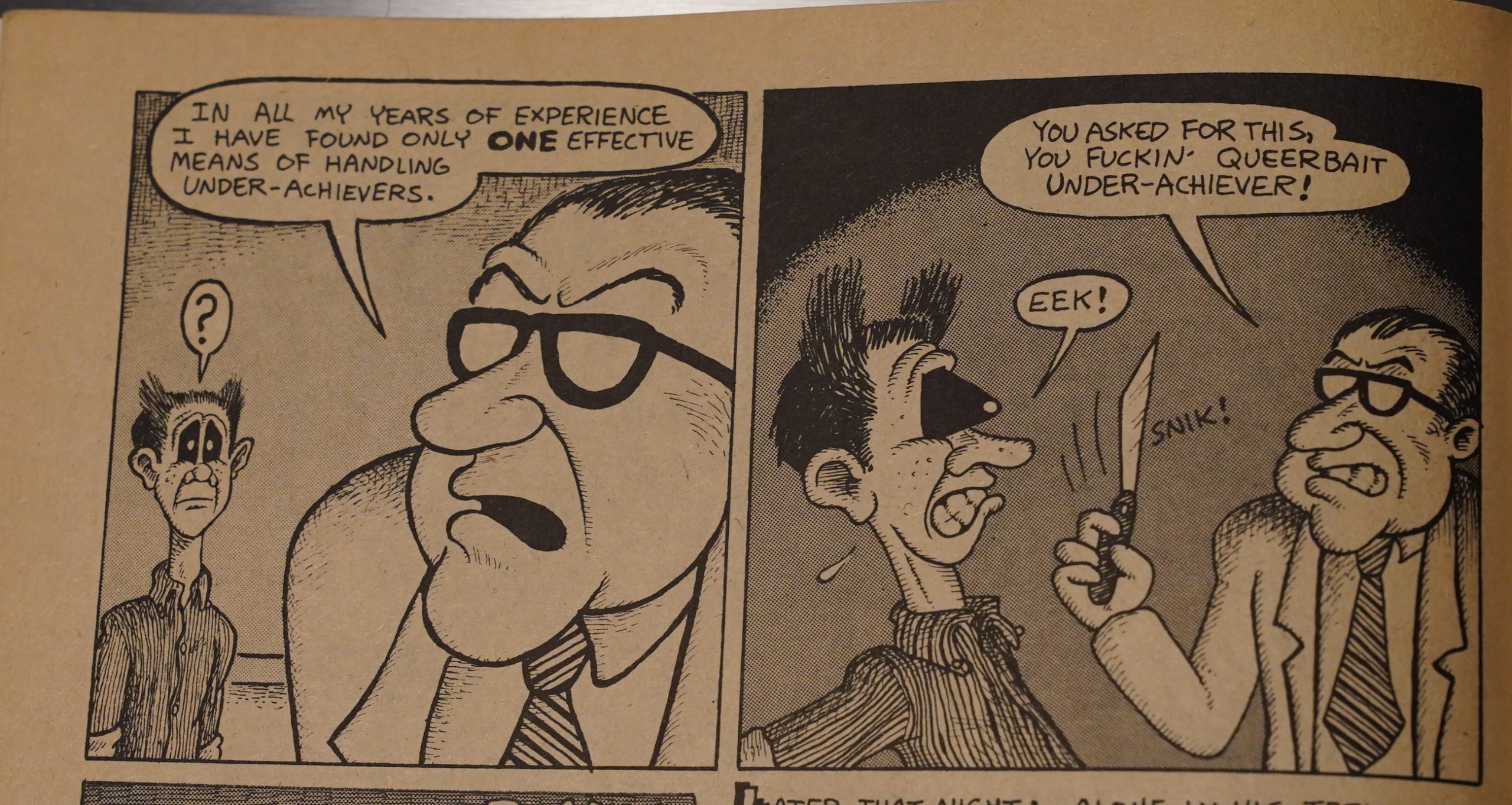 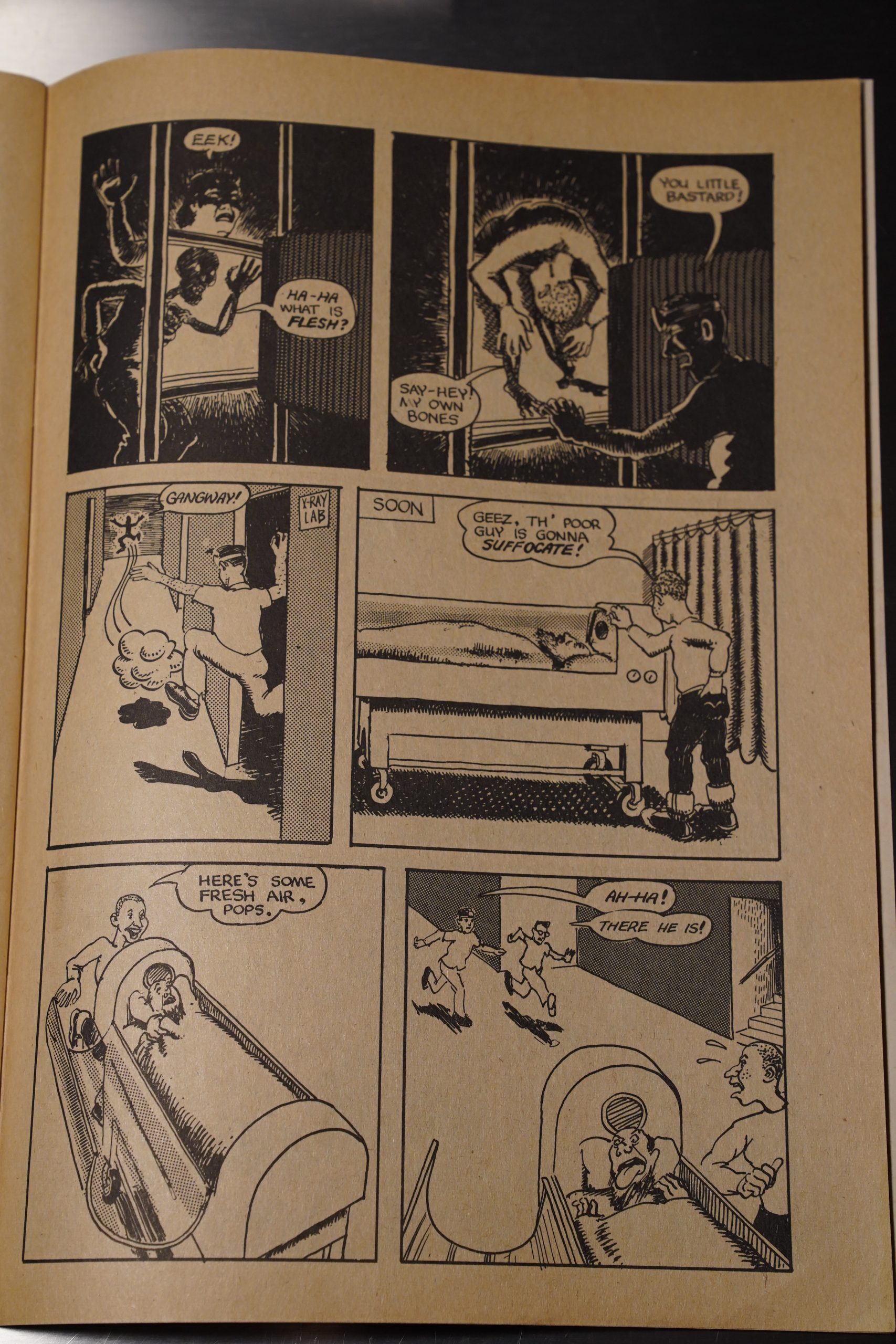 Justin Green would later give birth to the entire autobio comics genre, but he’s just goofing off here. I mean, in a good way. 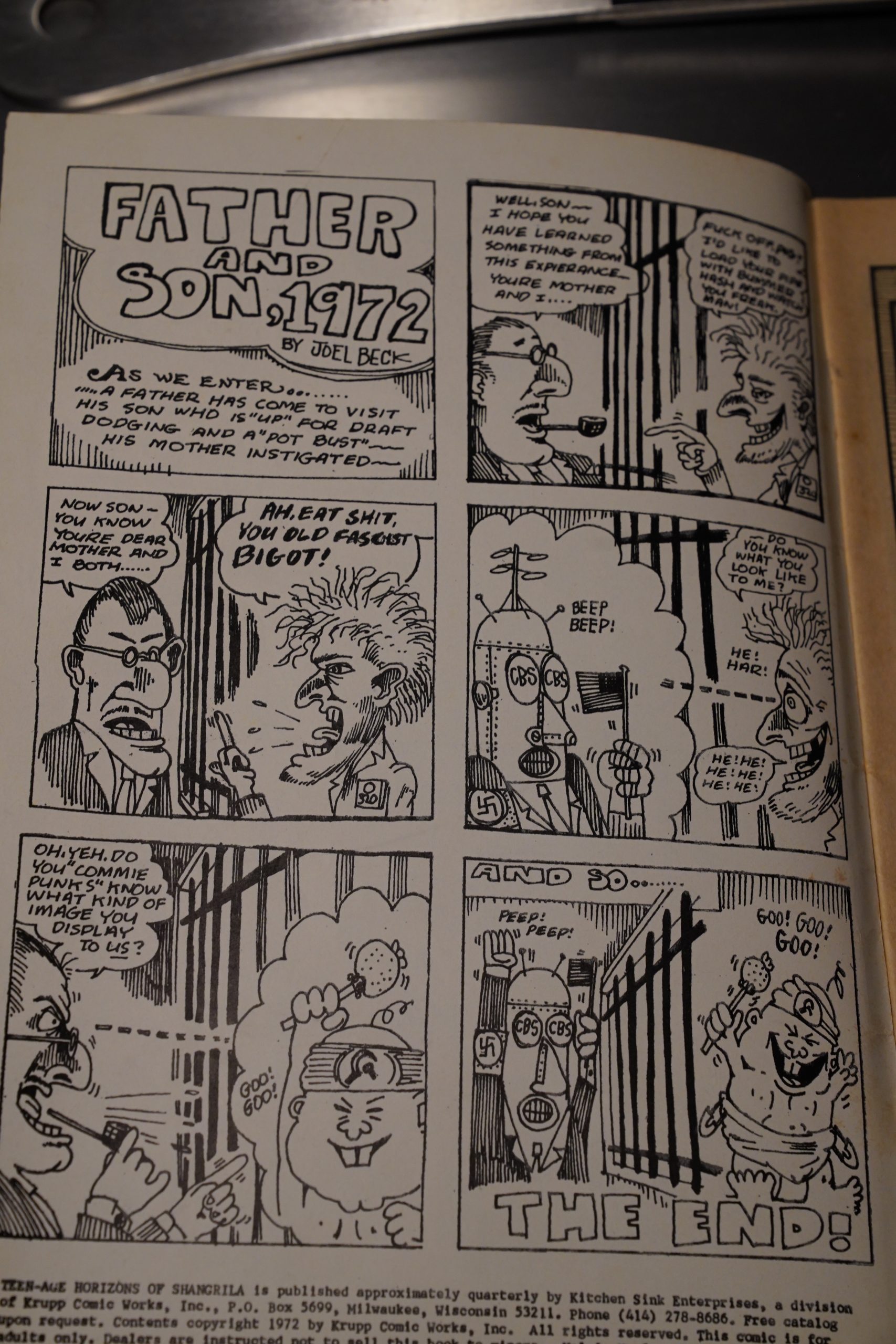 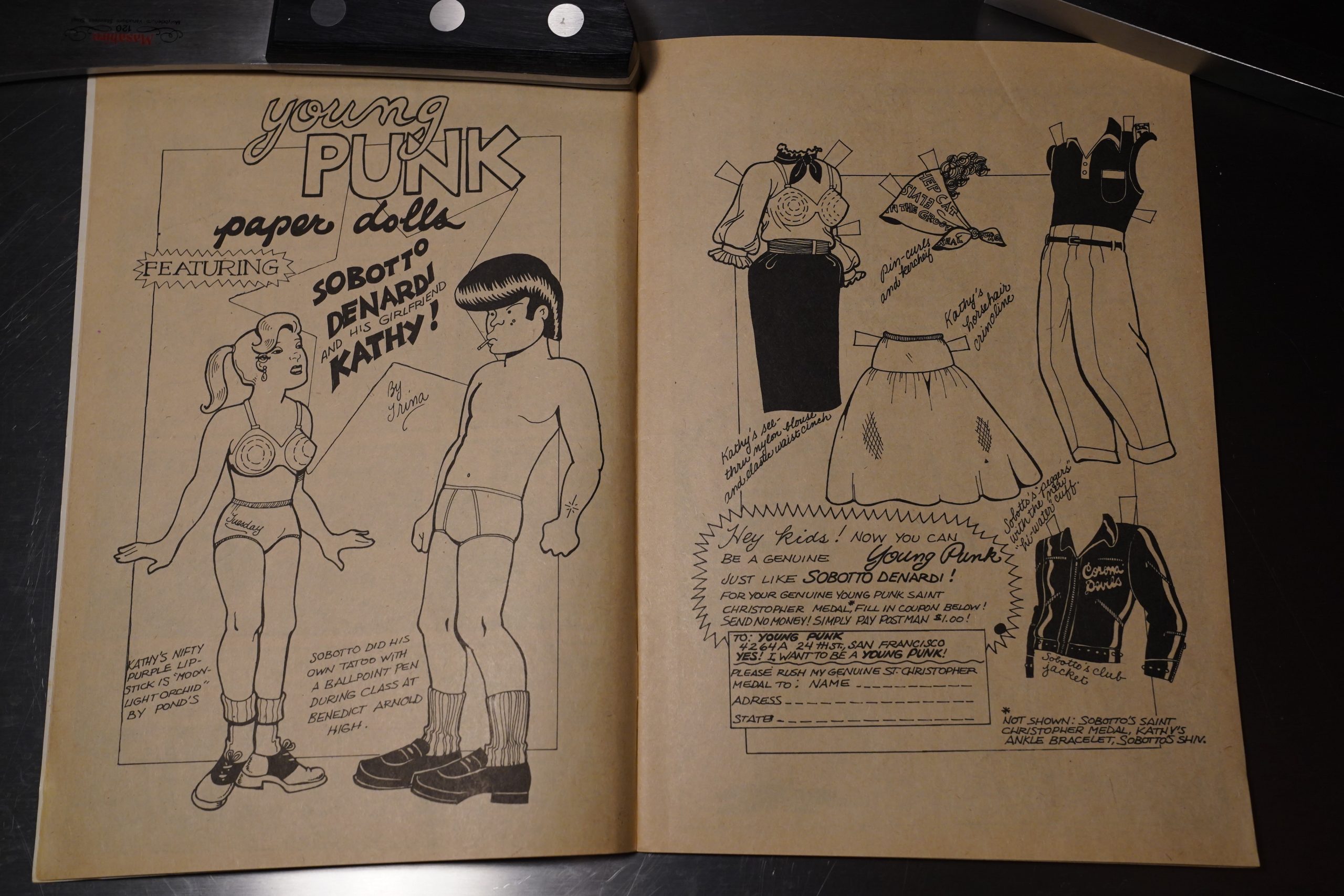 In the second issue, Trina Robbins does a very amusing satire on the whole hippie ethos, and also squeezes in a couple of pages of paper dolls. 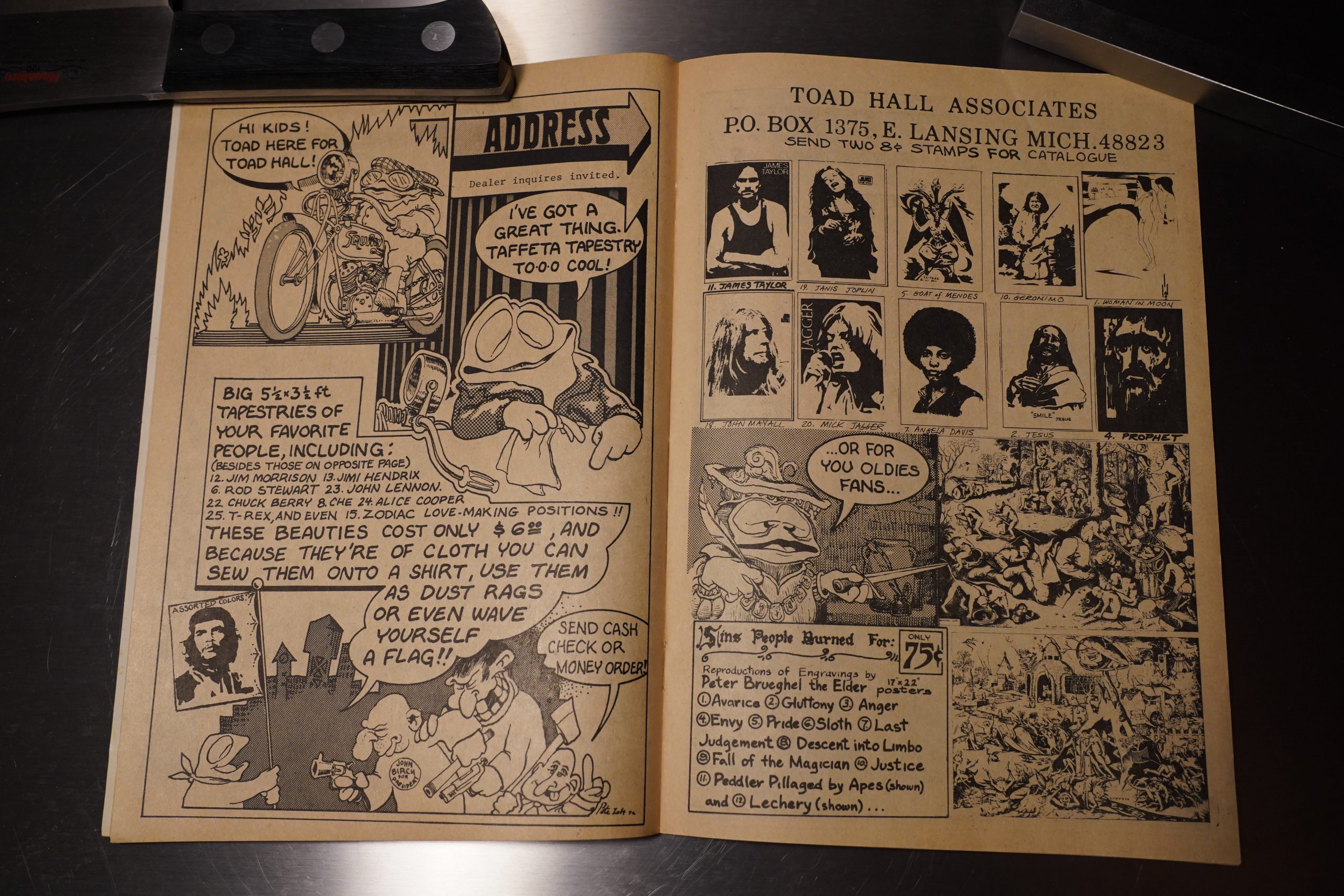 These comics are all 32-page standard size comics, but in this issue, Kitchen adds an eight page advertising supplement to the middle. Very enterprising.

And… that’s some collection of posters they’re selling!? 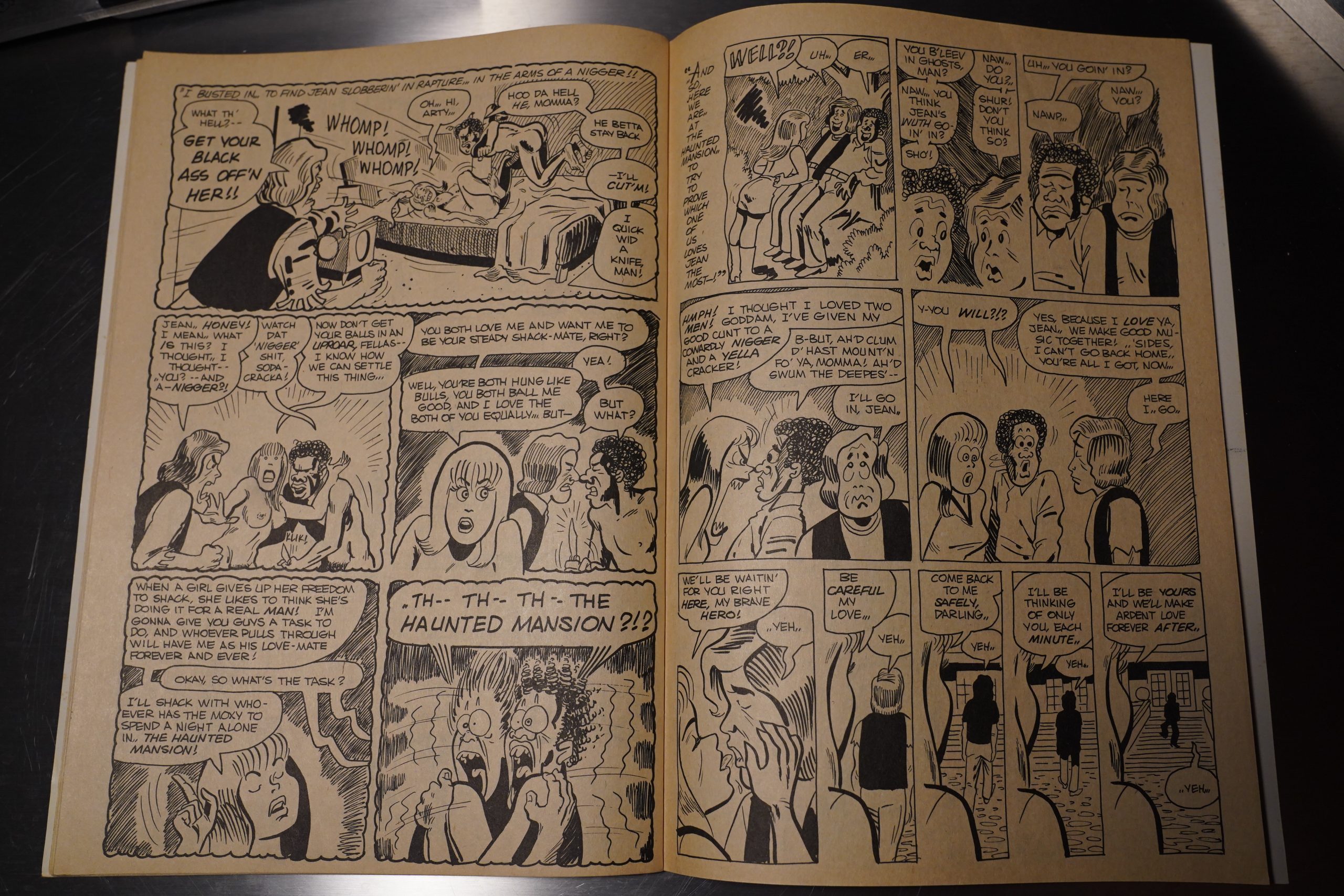 Unfortunately, the longest piece in the book is by Grass Green, who sticks out like a sore thumb. It’s a basic dopey humour strip, but made “edgy” by adding some boring sex.

These two books flow pretty well, though — I’m not sure Kitchen knew exactly what he was doing at this point, but he’s got some good talent in here, and it seems like everybody’s having a lot of fun.

This is the fourth post in the Entire Kitchen Sink blog series.