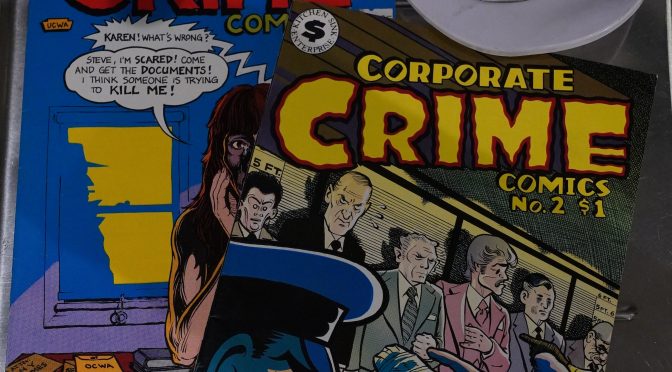 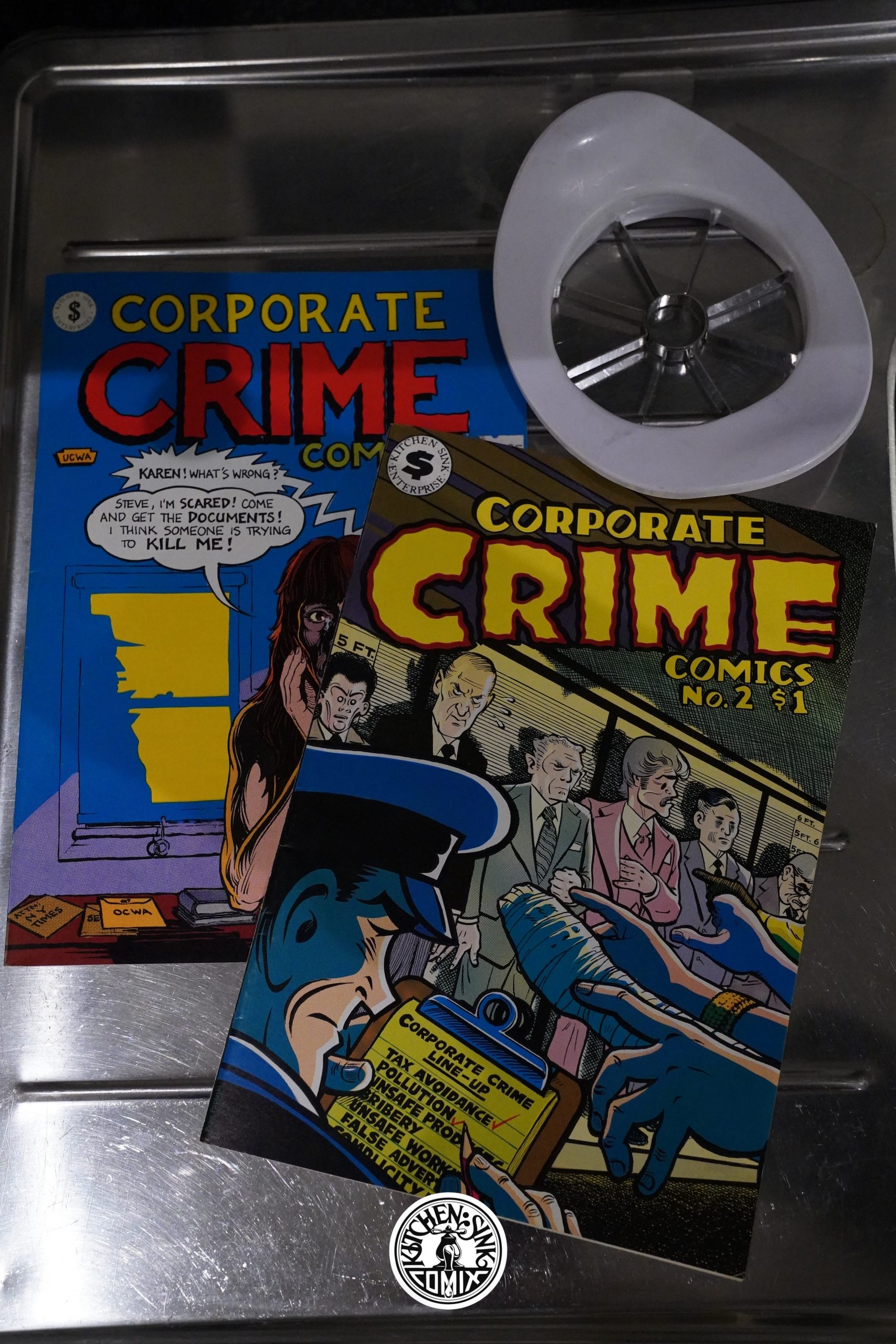 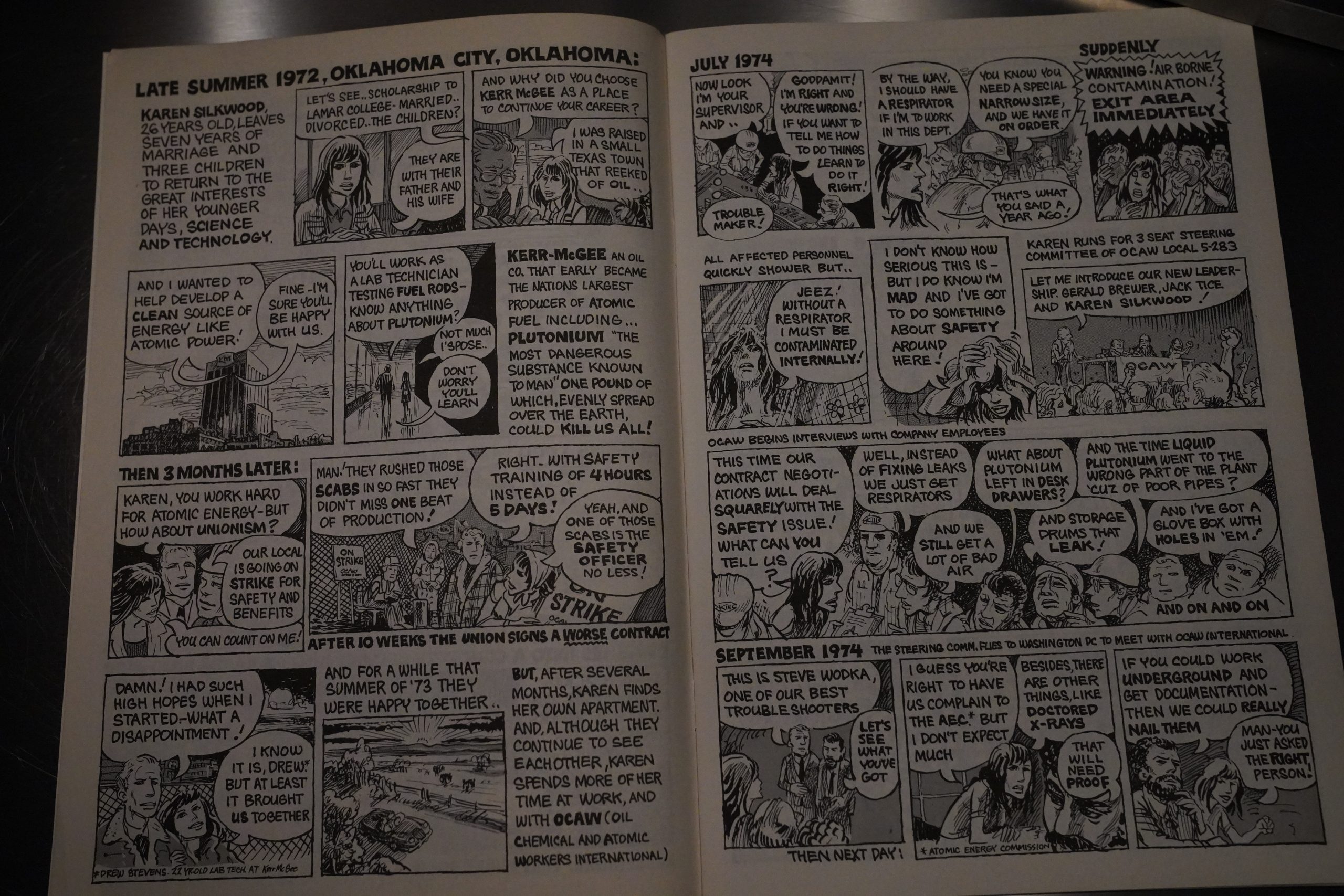 This series was edited by Leonard Rifas, who had a kinda mini movement going in comics for a while — “educomics”, I think he called it? Anyway, his idea was that comics were excellent for edumacational porpoises, and he launched at least half a dozen series.

This one is about… Corporate Crime. We start off with R. Diggs doing the Karen Silkwood story… in a very compressed way. But it’s somehow quite engrossing even so? 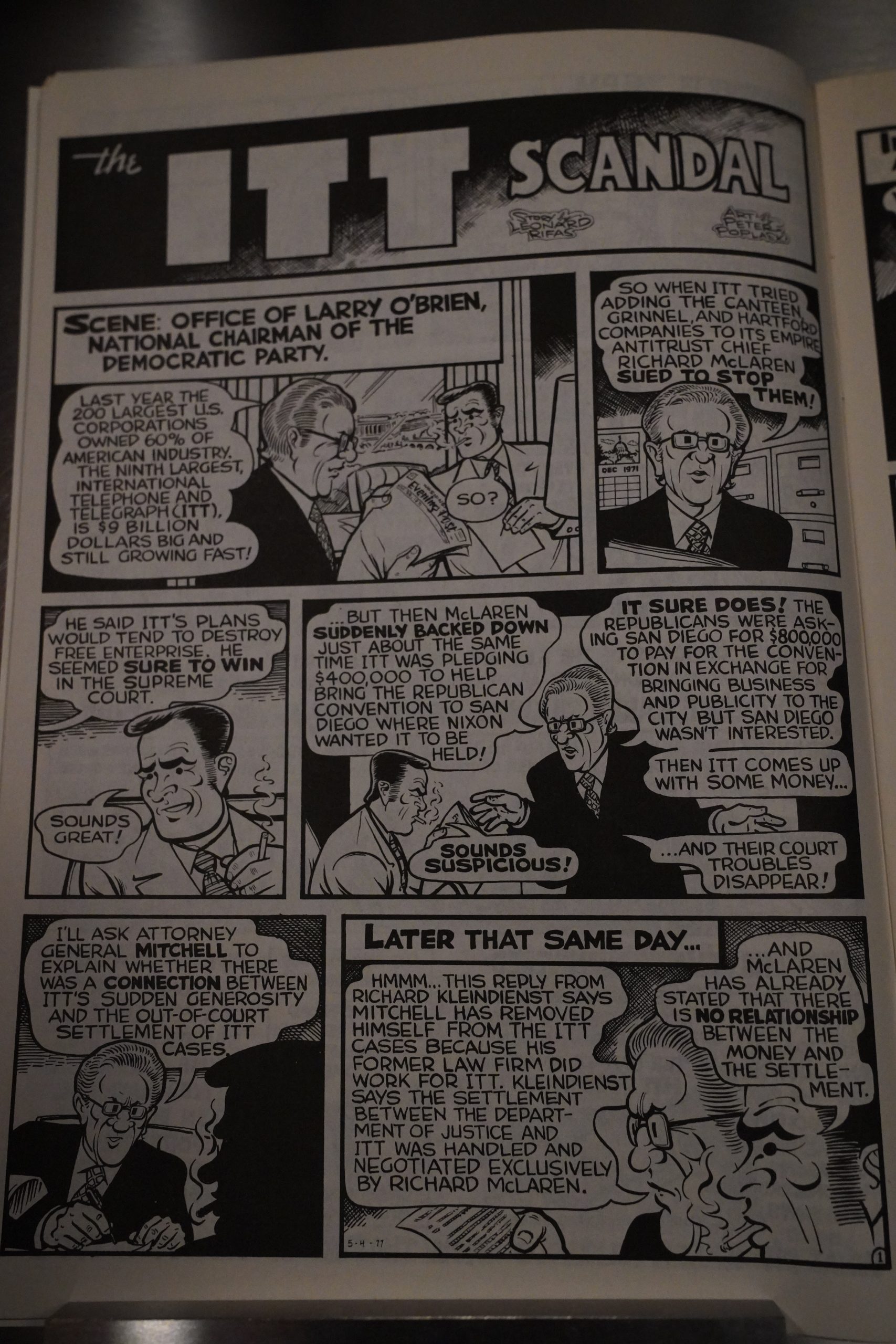 Peter Poplaski illustrates an ITT scandal in a kind of Dick Tracy style. It shouldn’t work, but it kinda does? 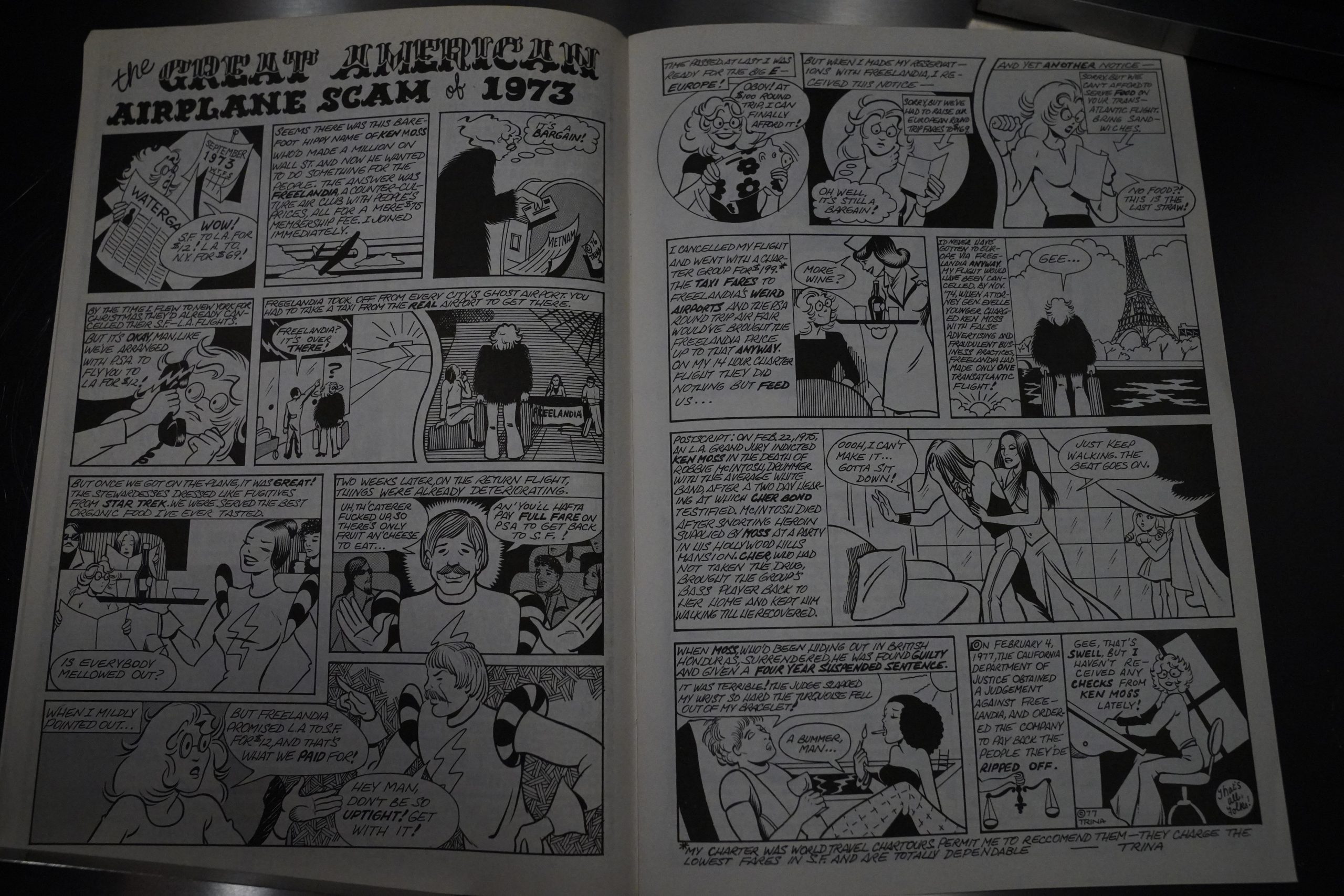 While the other ones take on pretty major crimes, Trina Robbins does a pretty amusing story about being taken for a ride by the cheap Freelandia flights. 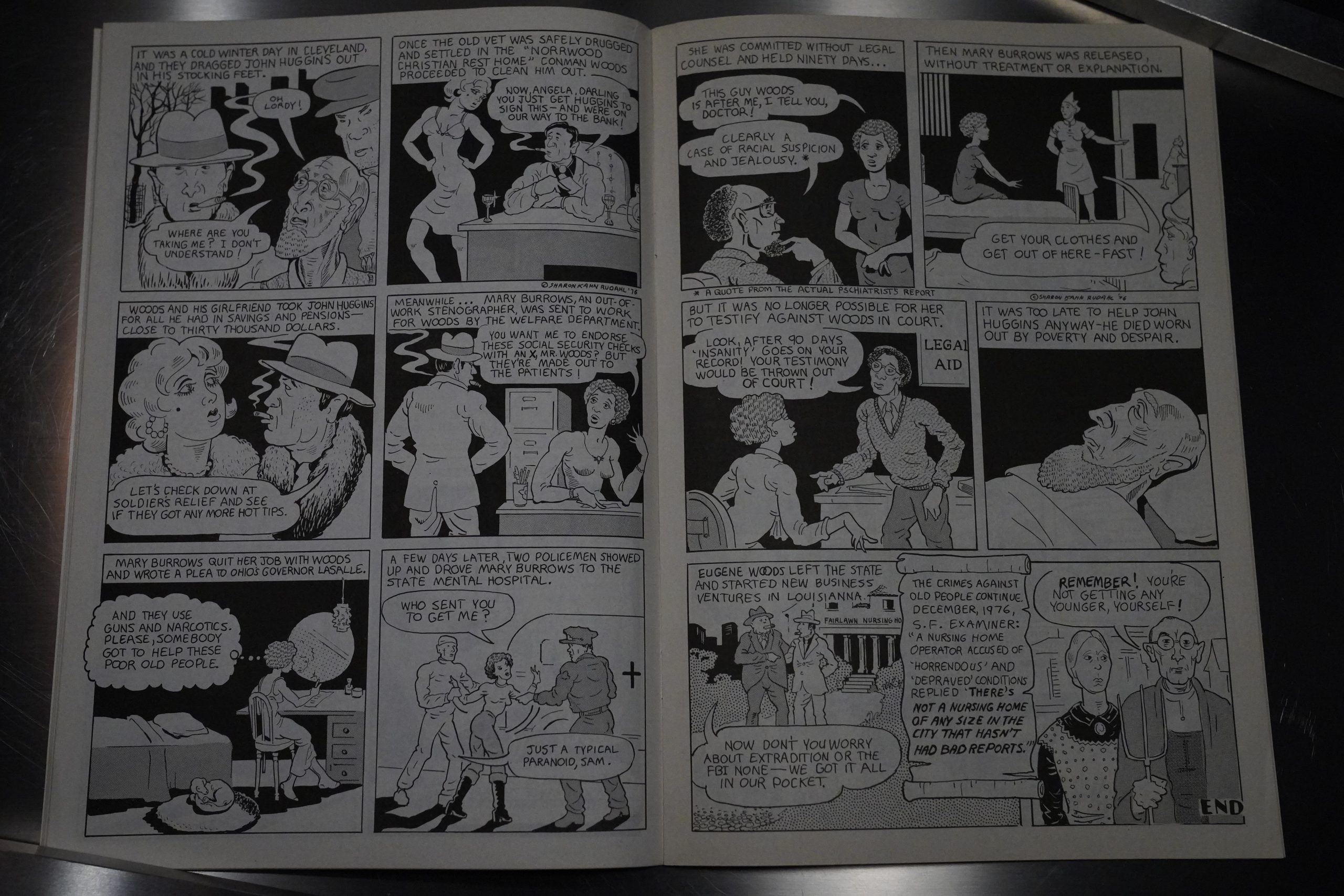 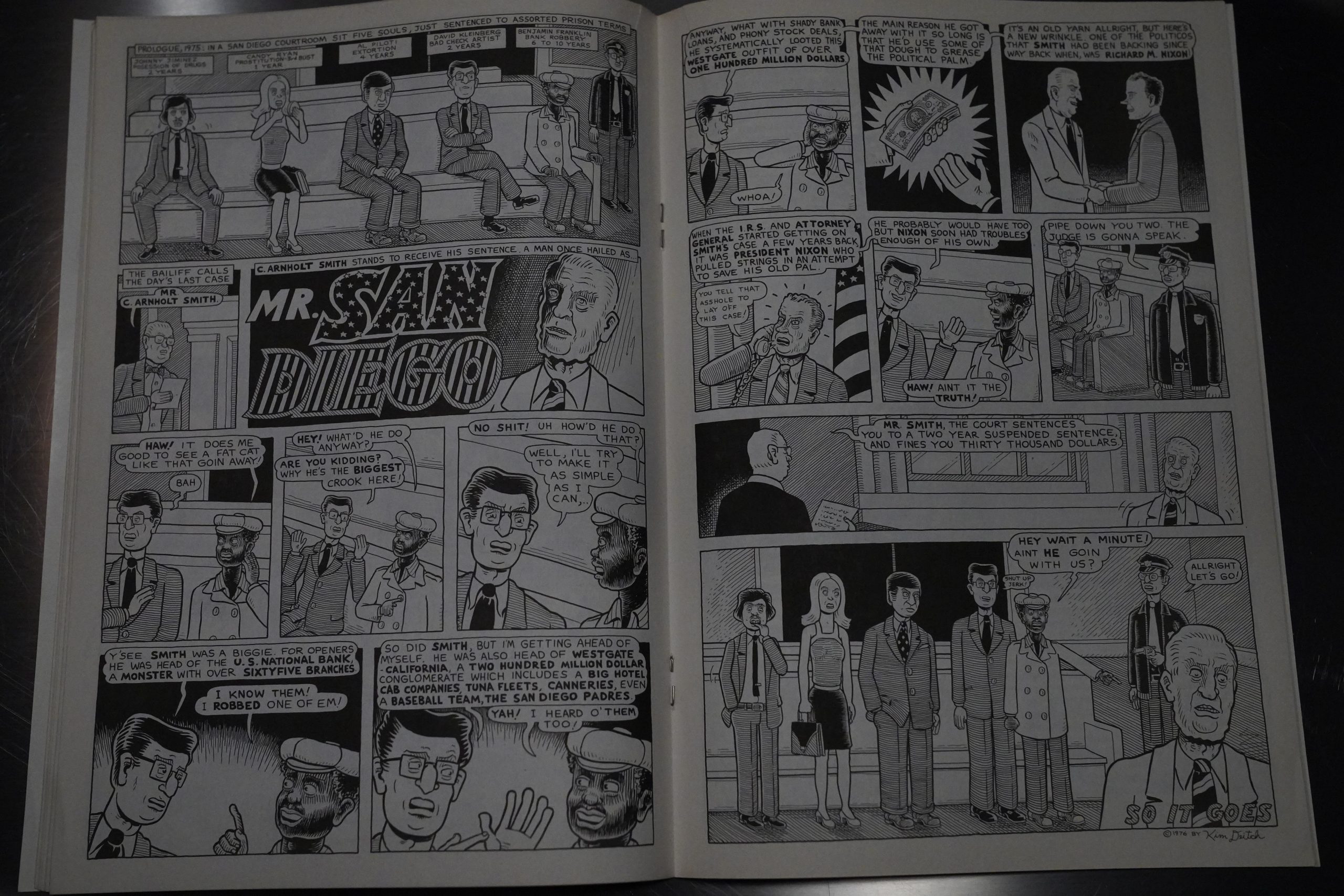 And Kim Deitch takes on fairness in sentencing.

All of these stories are text heavy, because the artists have a lot of stuff to jam into two or three pages. And it shouldn’t work, but it does? The first issue feels vital, somehow. It’s not storytelling as we know it, and that’s fun. 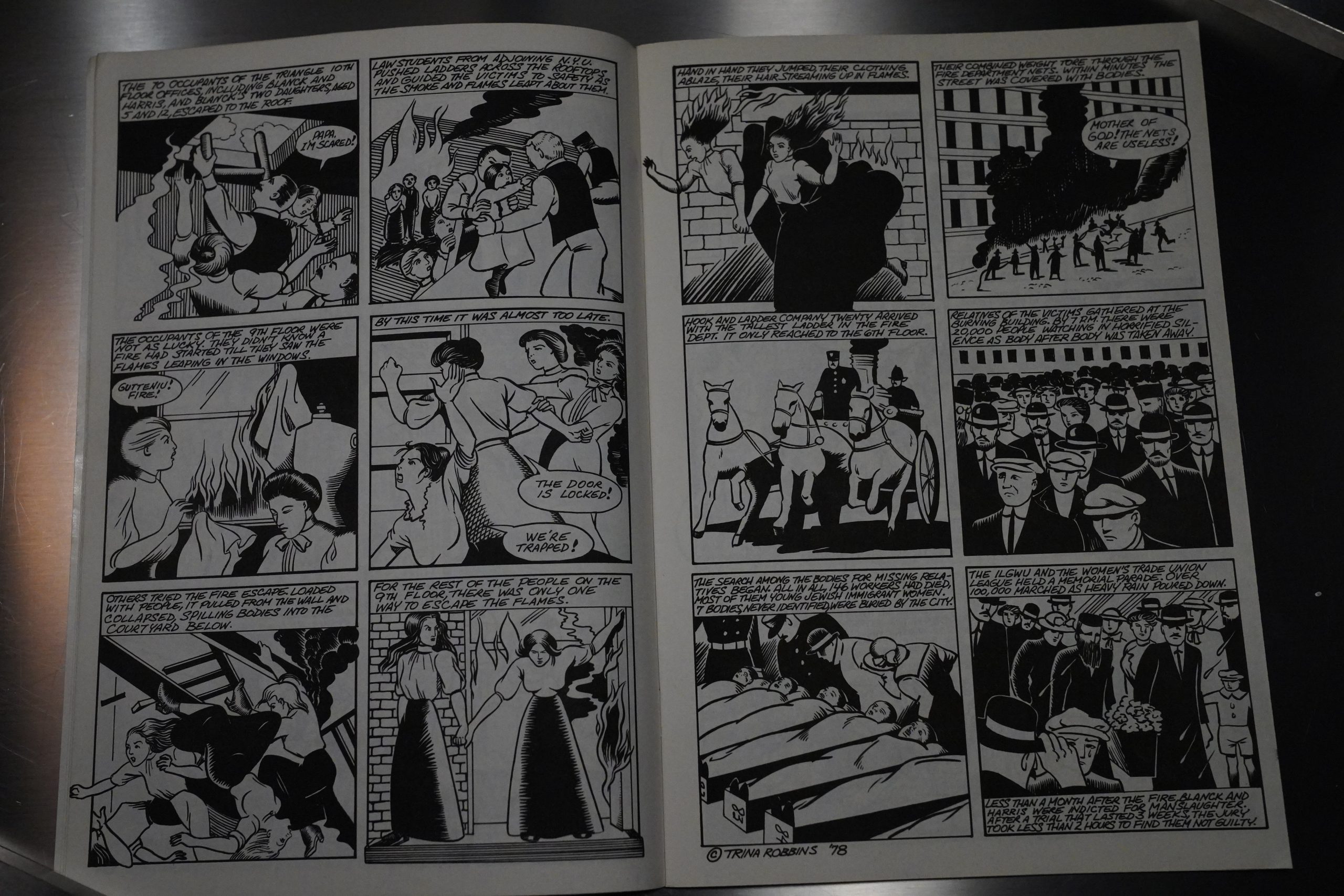 The second issue is somewhat less successful. Trina Robbins does a terrific retelling of the Triangle fire, but the rest of the issue… er… it’s fine? It just doesn’t feel as coherent as the first issue. Or… not as… I can’t quite put my finger on it.

Both issues went through three printings:

Rifas is interviewed in The Comics Journal #92, page 98:

LUCIANO: How did Corporate Crime
Comics come into being? It’s a wonderful idea
for comic book. I enjoyed it immensely.
RIFAS: Oh, thanks. Once when I was talk-
ing to Denis Kitchen about •i variety of
ideas—I spent a year living in Wisconsin,
working for Denis and Krupp Comics
Works as an associateeditor…
LUCIANO: In what
RIFAS: [Strugglingl 0K.. .uhhhhhhhh.
LUCIANO: Within the last five years?
RIFAS: Hm? Oh, it was within the last five
years! I have trouble pinning dates down,
Anyway, as to how the idea originated
[Reaching over for a copy Of Corporate Crime
Comics] You have a copy there… if I
could refresh my memory.. .1 usually
explain in my prefaces, how I come to a
thing.
LUCIANO: (As RIFAS reads his preface in
Corporate Crime Comics Did these do
well, by the
RIFAS: Yeah, they did pretty well! People
still come up to me and tell me how much
they enjoyed Corporate Crime Comics. I was
able to get a lot Of my favorite tartoonists
to draw these stories.
LUCIANO: Yes, very good ones. . the tops.
RIFAS: They were very good ones! They
did some great work! R. Diggs, Greg Irons,
Jay Kinney, Becky Wilson, Larry Rippee,
Pete Poplaski, Kim Deitch, Trina Robbins,
Sharon Rudahl, Larry Gonick, Sam
Whitehead, Justin Green, Larry Todd,
Guy Colwell all of them. (Glancing again
at Corporate Crime Comics Yeah, here
in the second issue, I explain What I was do-
ing when it first occurred to me that I
wanted to do a comic book about cor-
porate crime. I was reading a book, In The
Name Of Profit by Robert Heilbroner.
When I read something that sends chills up
and down.my spine, that’s when I usually
think, “Hew, I’ve gotto do something with
this information!” What Heilbroncr had
done was collect a series of articles about
different corporate atrocities. Exposing the
atrocities themselves wasn’t the point ‘of his
book. Heilbroner explains’in his book that
the’ importance Of corporate atrocity
stories is that they call attention to the
problems that we have as a result of the
concentration of econOmic power in so few
hands. That’s really What the series was
about.
LUCIANO: Will there be a Corporate
Crime Comics #3
RIFAS: Well, the stories for the entire
issue were all assigned. was more or less
ready to move with it. I wish I could
remember them all… R. Diggs was going
to do a long story on toxic waste, Paul
Mavrides, another awe-inspiring car.
toonist, was going to do a big piece on cor-
porate support for apartheid in South
Africa… Denis Kitchen was working on a
two-pager about Krupp Cannon Works’
use of slave labor during World War II..
can’t remember the whole book. It would
have been great except well, the energy
just fell apart on it. It took a lot of work and
research to do Corporate Crime Comics, and
the pay was no better than on a regular
underground comix. [ was over-research•
ing everything because I didn’t want to get
sued bv anvbody for saying anything that
ventured bevond what the available facts
in the public record stated. And even with
all the precautions I took, Denis told me
that when our agent tried to séll Corporate
Crime Comics to a New York publisher as
an anthology of the first three issues—the
t\VO that existed. and the third that we
were intending to do—the lawyers that
work for the publishing firm felt profes-
sionallv to inform their emplovers
that there’s wav” tlnev should publish
that stuff: So that’s one of the
advantages of being associated with a Sinall
press. You don’t have enough money to
mirth suing so free to sav
want to sav .
LUCIANO: The corporate don ‘t feel
threatened because it’s a small press?
RIFAS: Right.
LUCIANO: It sounds like a David versus
Goliath situation.
RIFAS: Well, everybody’s got a certain
level of nuisance that they’ll tolerate. I’m
apparently a tolerable nuisance but .
some people get rougher treatment. City
Lights has published an anthology called
Un,American Activities which dOcuments
how the government harassed and sup-
pressed underground papers in the late ’60s
and ’70s. haven’t been harassed, which
suits me fine, but I haven’t been very dar-
ing either. As I said, all the information in
Corporate Crime Comics was part Of the
public record. Most Of it was very widely
disseminated by the mass media. The infor-
mation is available, but mass media tends
to run vast quantities Of data through big
choppers so that you have to pick a piece
from here and a piece from there, in order
to construct a coherent world View.

The Fate of Corporate Crime Comics

Since the first two issues of Corporate Crime
Comics were remarkable both for the issues
they addressed and the talented group of
artists whose work appeared therein, it was
a disappointment that a third issue never
materialized. Leonard Rifas provides an
account of why Corporate Crime Comics
ceased publication after its second issue.
When contacted, Denis Kitchen of Kit-
chen Sink Press provided his own account
of Corporate Crime’s ultimate and sad fate.
Q: Leonard Rifas says that you had begun
work on a Krupp slave labor story for Corpo-
rate Crime
KITCHEN: Yes, I did begin doing that
story. I still have the first page with three or
four panels fully inked. When Leonard was
assigning stories for #3, he was trying to get
me back to the drawing board and thought
a story on our namesake would give me the
necessary spur. He was correct to a degree.
I did quite a bit of research, took notes, did
sketches, over a period of time. I should
mention that I have since sold our Krupp
Distribution business and the name
Krupp.
Q: Why did you find it necessary to abandon
Corporate Crime?
KITCHEN: Underground comix sales
were gradually but definitely declining.
Despite “decent” sales—’l sold 20,000
copies, sold could not afford
the extra costs of editing the book.
Leonard was willing to work cheap, but
even then the book consumed an enor-
mous amount of research time. Most artists
who appeared in Corporate Crime were will-
ing to work cheap too—the very fair
royalty was based on sales—but 10-20,000
sales are just not enough to entice most
contributors. To entice them at all,
Leonard had to provide the research and,
in many cases, the actual dialogue. So the
bottom line was that sales did not justify
the labor the end product required.
Q: Did other factors enter into the decision not
to continue the book?
KITCHEN: Our resources were already
strained. The underground market that re-
mained was interested in Freak Brothers and
dope and sex comix, not exposes of white
collar crimes. Then, too, there was the
ever-present danger of a libel suit, par-
ticularly from any of the big American
companies we did pieces on. I had always
operated on the assumption that the truth
was the best defense. But we found out that
the truth is not enough. A corporation
could claim we had malice, for example.
We could defend ourselves easily on factual
grounds, but a corporate entity that
wanted to get us could easily have papered
us to death in the legal sense. Unless the
ACLU or the Playboy Foundation or some
other benefactor had come to our aid, we
quite literally could have been put out of
existence, even if our facts were correct and
our motives pure. I have to admit that I
became quite concerned at that point.
Q: So that was it?
KITCHEN: Leonard and I seriously con-
sidered the possibility of forming a separate
corporation to publish Corporate Crime so
that we would have the corporate shield to
protect us individually and a small, nearly
worthless entity to ‘absorb any such legal
attack. We even considered calling it Paper
Shield, Inc., but decided that was too
transparent. Ultimately, we just gave up
trying to complete Corporate Crime
Q: Leonard Rifas mentioned that you were try-
ing to market a Corporate Crime anthol-
ogy.
KITCHEN: Yes, one other factor enter-
ing into all this was the possibility of a
squarebound collection that could be
marketed to Daltons, Waldens, etc. We ac-
tually had Fireside Books, a division of
Simon & Schuster, interested at one point.
The advance from that sale could easily
have enabled us to complete a third and
additional issues. Unfortunately, the legal
department at Simon and Schuster advised
the Fireside editors that this book posed
too many dangers. Again, it got back to the
“possibility” of libel suits, and Simon and
Schuster felt they had pockets deep enough
to make a suit more likely. Another pub-
lisher—l think it was Prentice-Hall—told us
the same thing. That was the final nail.
And it was a shame, because the series real-
ly deserved to go on, I thought. It received
tremendous publicity. We had articles
about it appear in the New York Times, and
the Washington Post, then a wire service
story to papers all over, magazines, all
kinds of places that could have boosted
sales had we been in a position to capitalize
on the attention… Of course, it’s not com-
pletely dead yet. Perhaps the movie of
Karen Silkwood’s story—starring Meryl
Streep—could be the springboard for a re-
Vival..

This is the forty-second post in the Entire Kitchen Sink blog series.