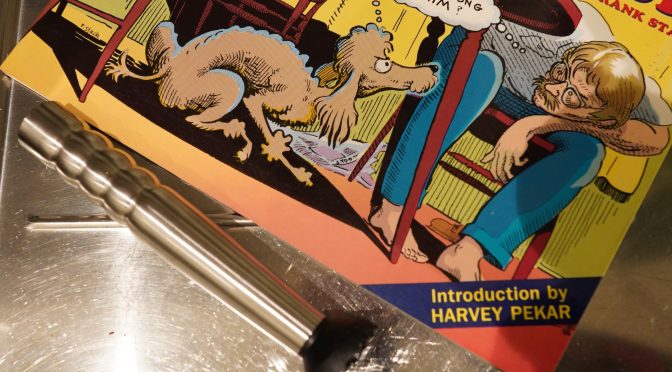 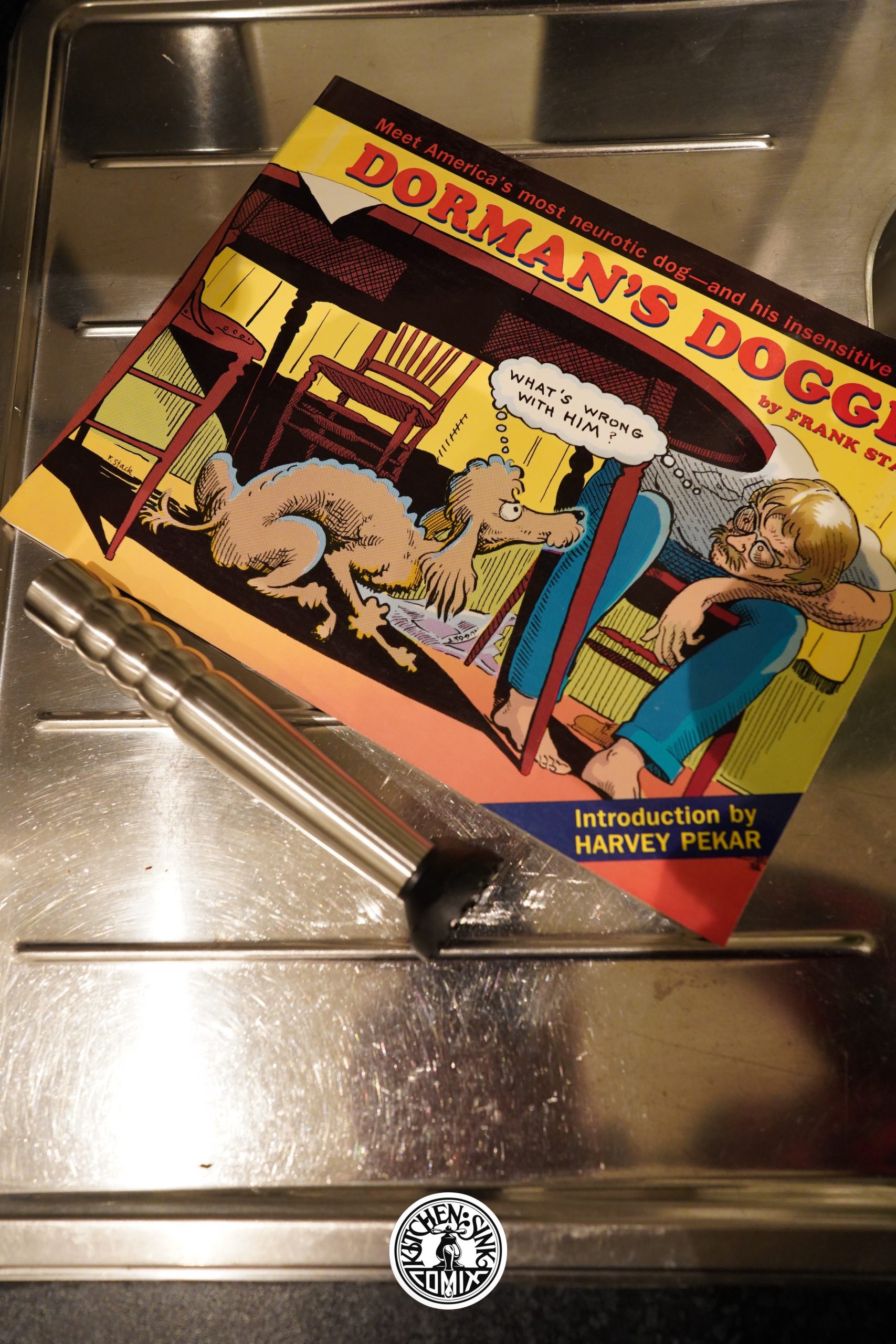 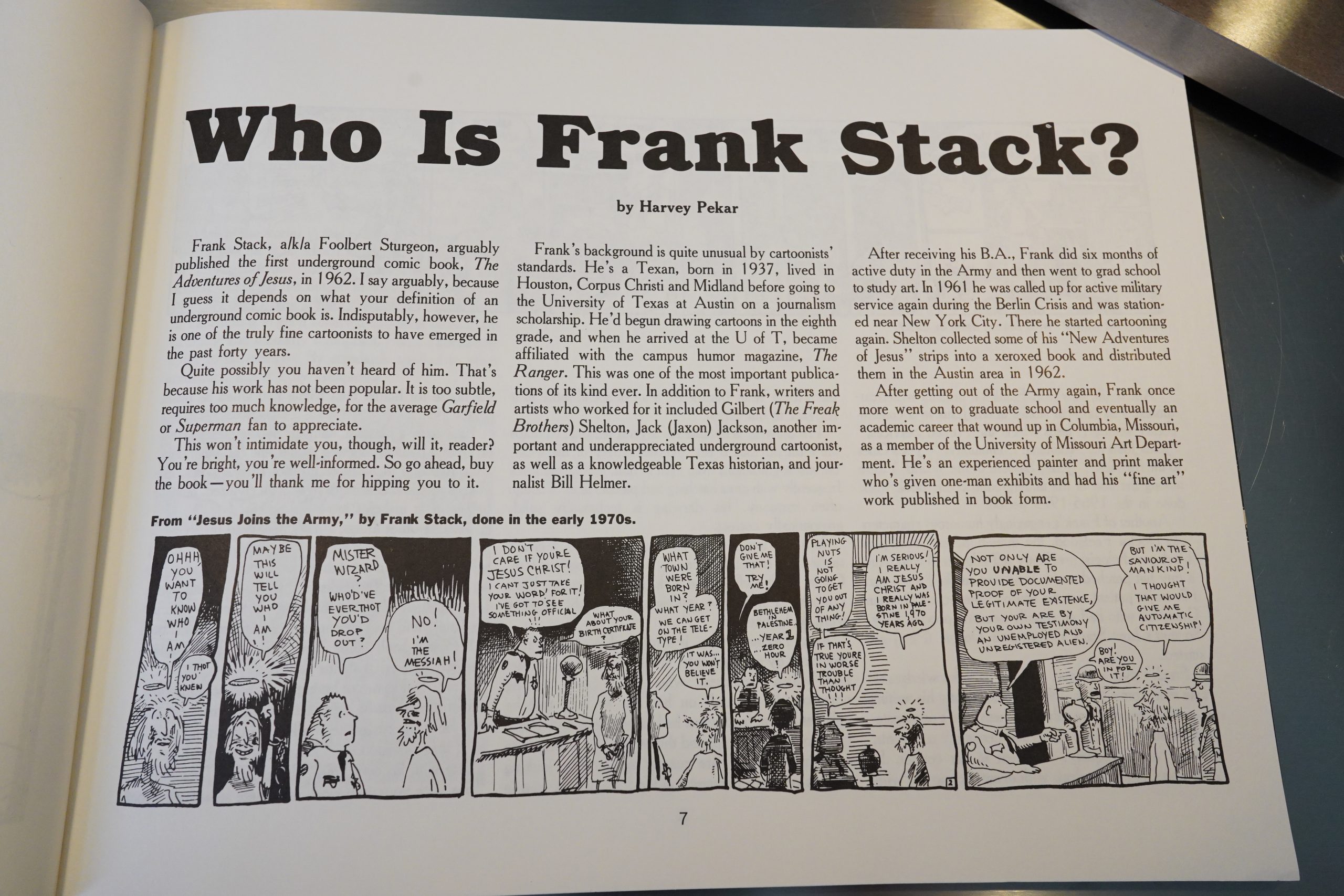 We start off this book with an unusually informative text by Harvey Pekar, who tells us that Frank Stack is a contender for the Who Made The First Underground Comic derby. 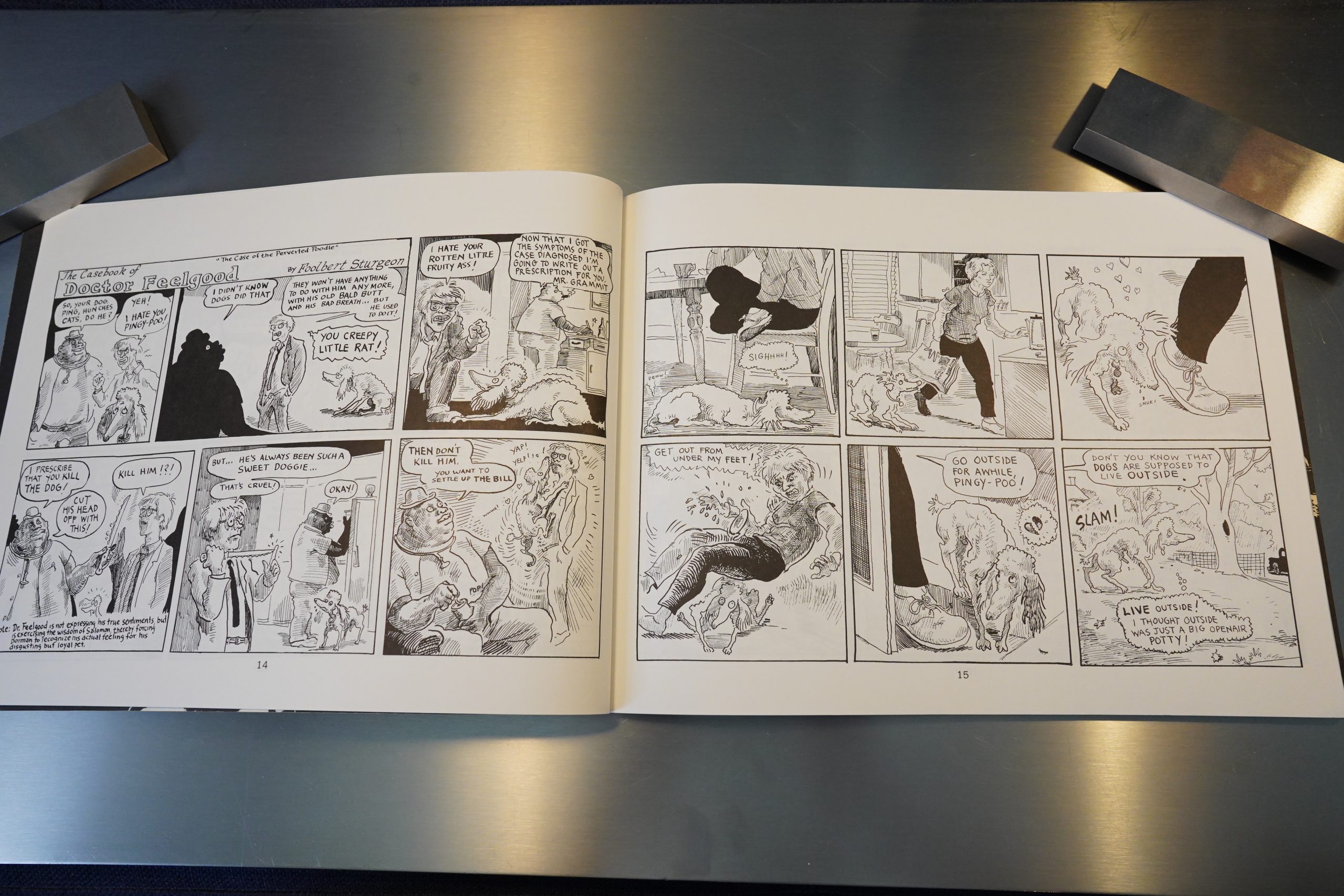 Many of these strips were originally syndicated by Rip Off in the late 70s (but there’s also appearances from later anthologies). 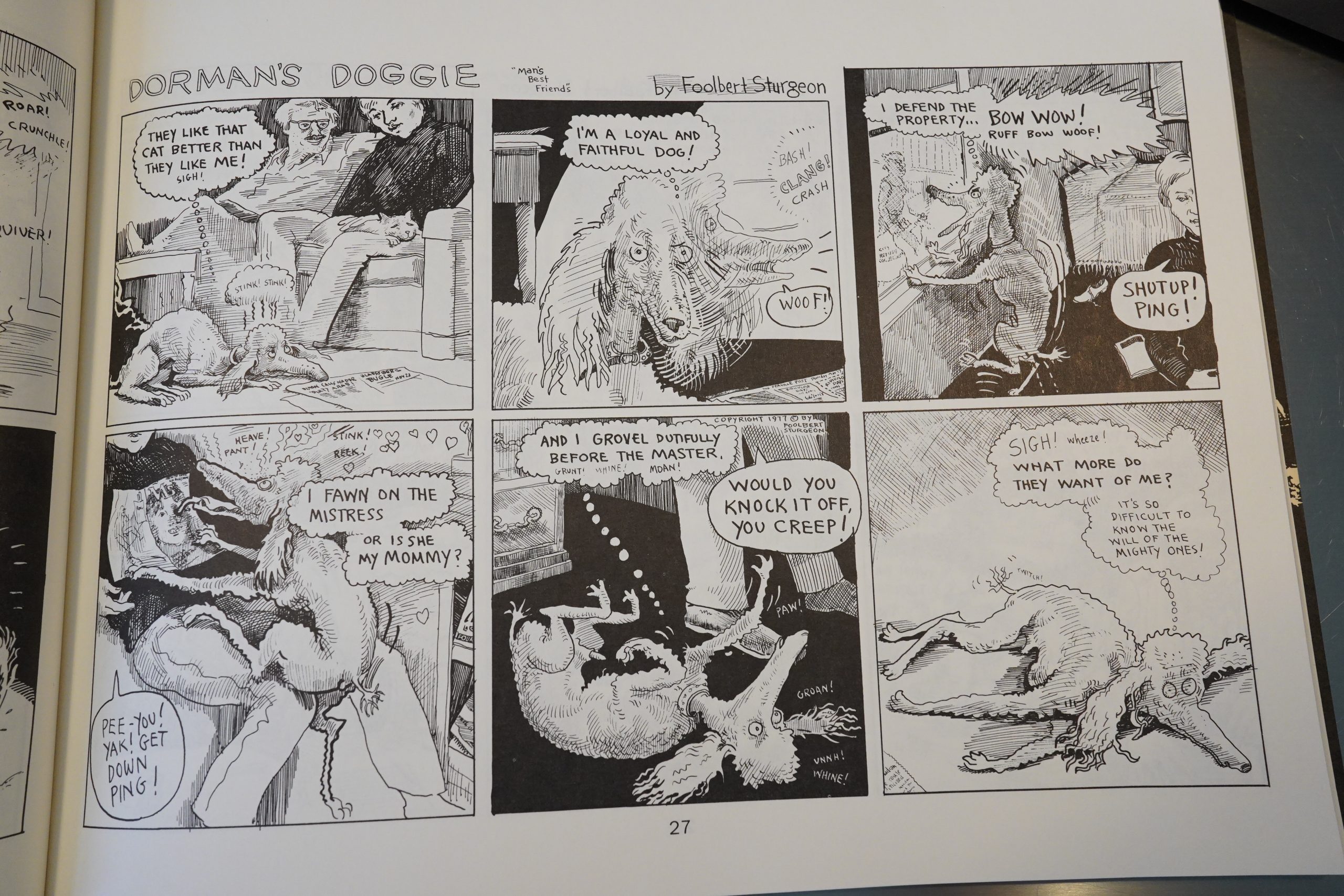 I love Stack’s cartooning — all those thin lines, and the highly expressive visual language he employs. It’s cartoony, but also very real: The panels have a great sense of place; we’re definitely in this little world. 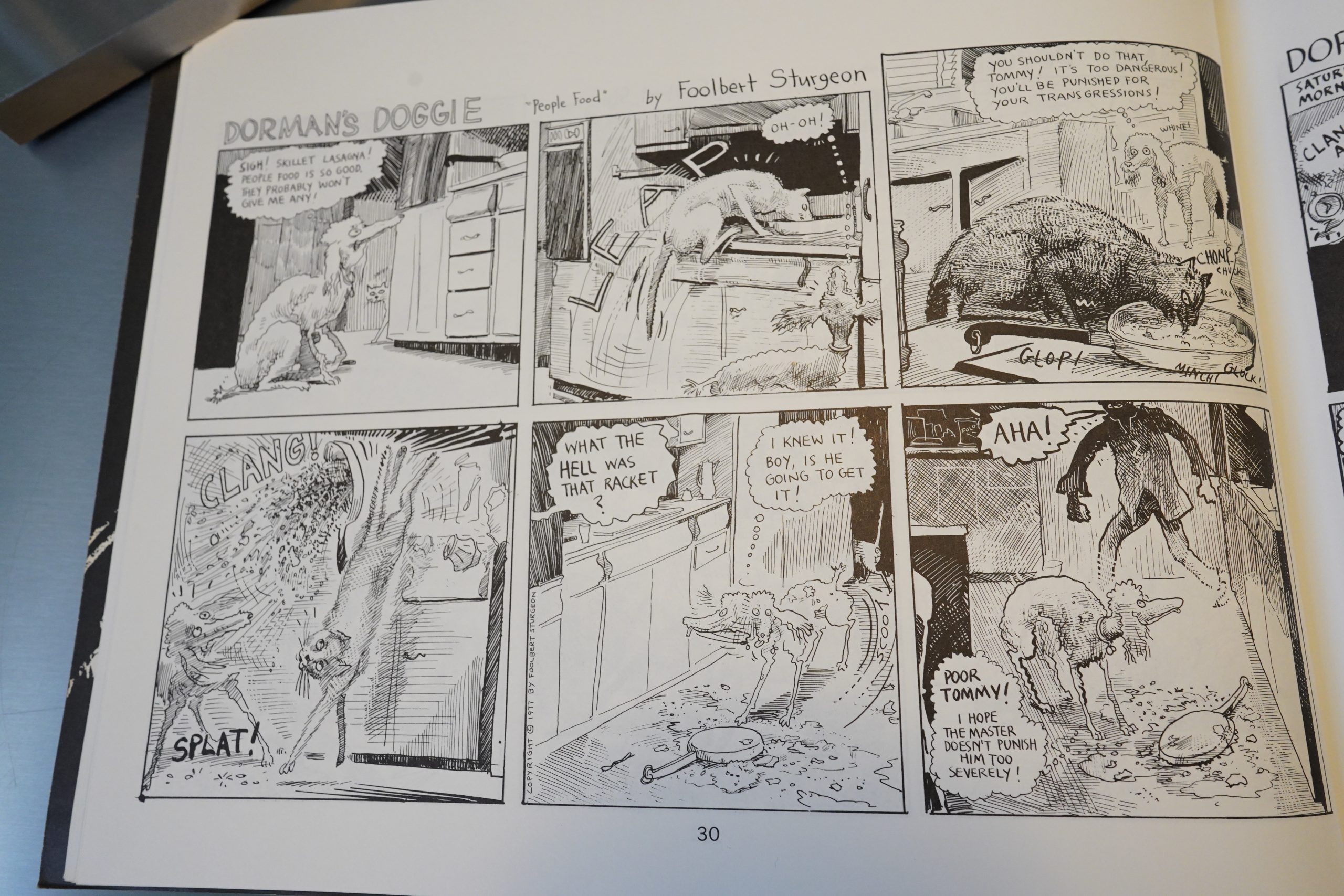 The gags are less laugh out loud funny than wistfully melancholic. It’s such a pleasant, humane read. By the end of the book, I found myself wishing the book had been at least twice as long.

It says here on the cover that Ping, the Doggie
of the title, is “a reasonable creature in a world
run by unreasonable, thoughtless and even cruel
and selfish creatures,” so it must be true, but
from my reading Frank Stack is up to something
a little more interesting than that. The most in-
teresting thing is that for the most part Ping is
not anthropomorphized. Instead. Stack has wit-
tily assembled a human analog of canine psy-
chology. Dogs are pack animals, and within a
pack one dog will dominant and the rest
will defer to him. When a dog is domesticated
the owners assume in the dog’s mind the role
of leader. (Normally, that is. There have been
cases where the more diffident type Of humans
will acquire the more aggressive type of dog,
such as a pit bull, and the dog will wind up ter-
rorizing the household and running the humans
around like sheep.) Ping is less a reasonable
creature than a superstitious creature with an
irrational reverence for his owners, whom he
tries desperately to please within the limits of
his conception of the world. The central pro-
blem of Ping’s life is that his owners do not have
a doggie door. He is therefore at the mercy Of
his owners when he has to relieve himself, and
when his owners leave the house they seem to
expect him to be able to turn Off his biological
functions until they return. His toilet habits are
what cause him the most anxiety and earn him
the most grief from his owners. The owners’
thoughtlessness and insensitivity stem less from
cruelty than from their own proscribed view of
the world; they interpret Ping’s actions and ex-
pect him to act according to human standards.
The trouble with seeing Ping’s situation as an
allegory of man’s inhumanity to man is that it
ignores physical realities: all the civili?Æd and
humane behavior in the world will not change
the fact that Ping smells bad, from either end.
Even when they’re trying their best to be sen-
sitive, Ping’s owners can’t change their visceral
reaction. And yet it must also be said that though
they don’t seem to get much pleasure out Of his
company, Ping’s Owners still observe the ethics
of pet ownership: once you’ve taken an animal
into your house, you are duty bound to feed and
shelter him until he dies, or at least is in enough
pain to give you an excuse to do him in. In the
end what Dorman ‘s Doggie illustrates is not so
much what the world needs now is love sweet
love as how two creatures can share the same
space in a state of perfect misunderstanding.
misinterpreting each and every action within
their Own rigid frame Of reference, intimate and
perfectly isolated from each other. As we all
know, this happens as much within a species as
between them.

What a dog. What a dog! Dornan ‘s
Doggie is a wonderful collection of
Frank Stack’s observational strips.
Ping, the doggie in question, is
selfless, obedient, and naively phil-
osophical. Stack has a marvelous flair
for dialogue and expression; his dogs
really do act like, dogs.
If you like a good laugh and aren’t
put off by superficial crudities (of
which there are many), buy this out-
standing book. If you’re smart, ignore
Harvey Pekar’s inane introduction.

This is the one hundred and thirteenth post in the Entire Kitchen Sink blog series.