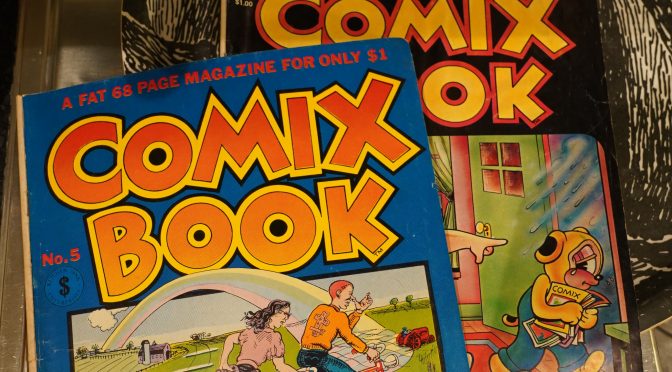 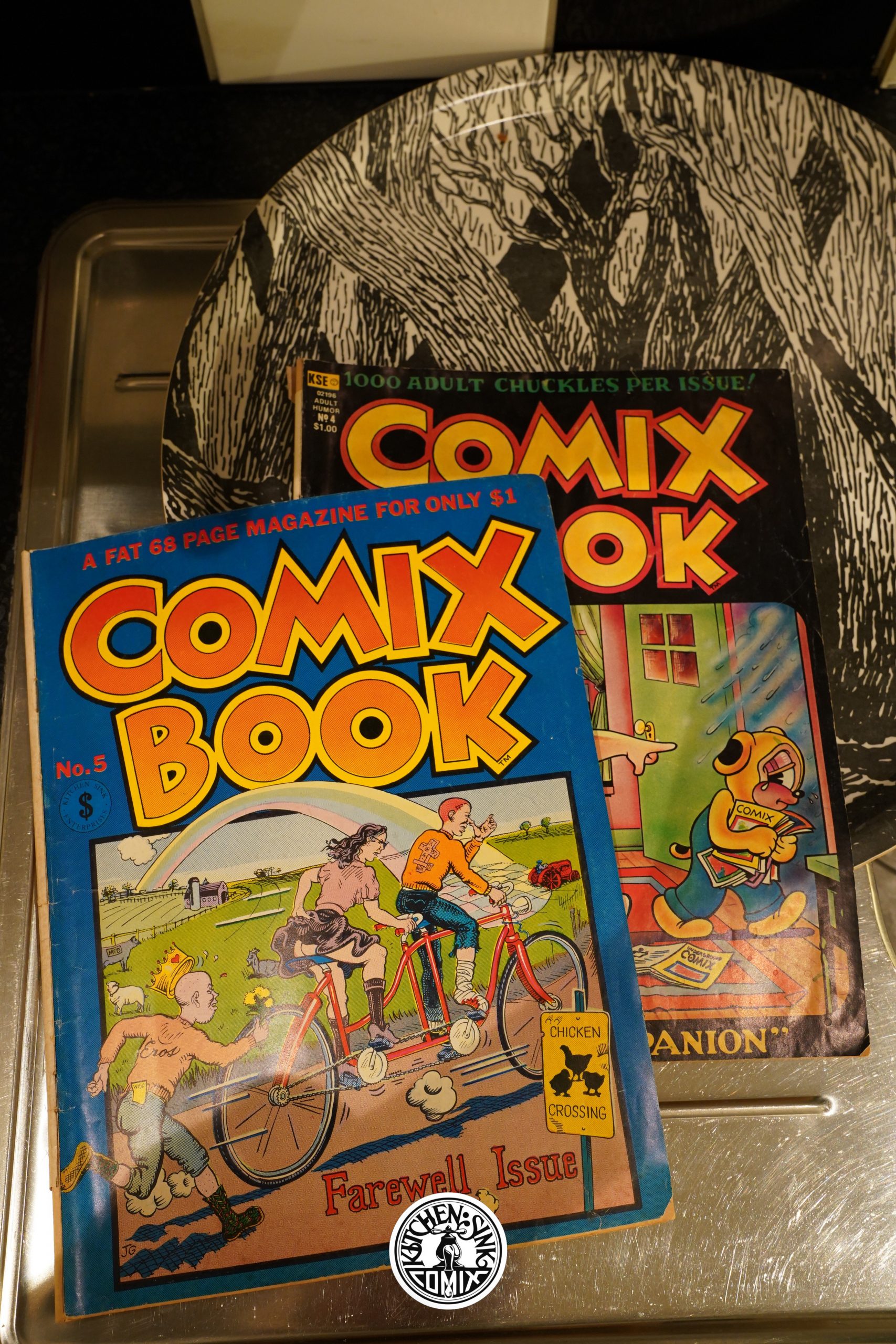 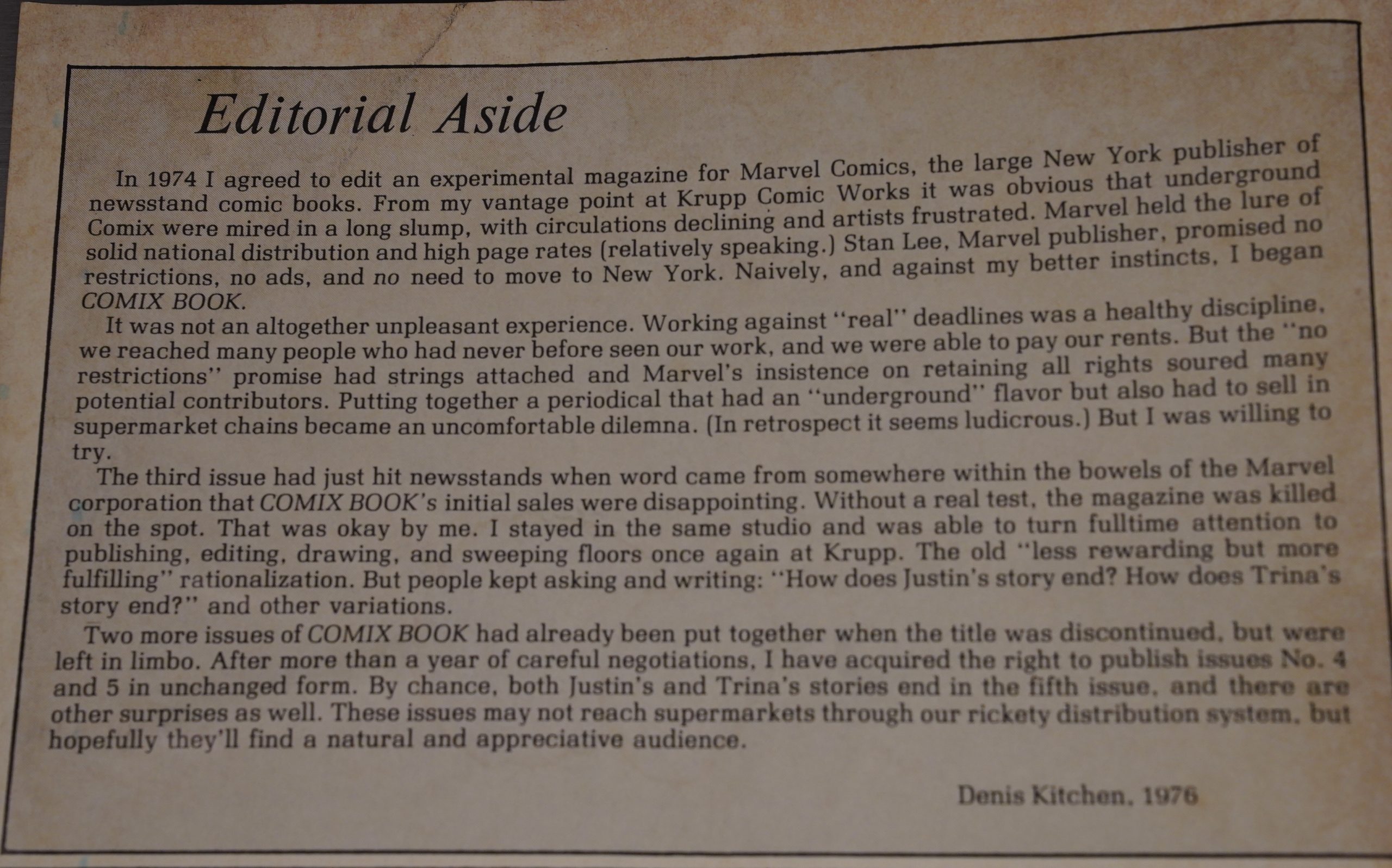 Denis Kitchen explains in the editorial what this is. To recap — Marvel wanted in on the Underground magazine business, so they called up Kitchen to make him put together a magazine which they would then publish on the newsstand. This didn’t really make much sense, and the magazine folded after three issues. But there were already two more issues in the pipeline, paid for and all, and Kitchen managed to convince Marvel to let him publish those two issues himself, which is what we’re looking at here. 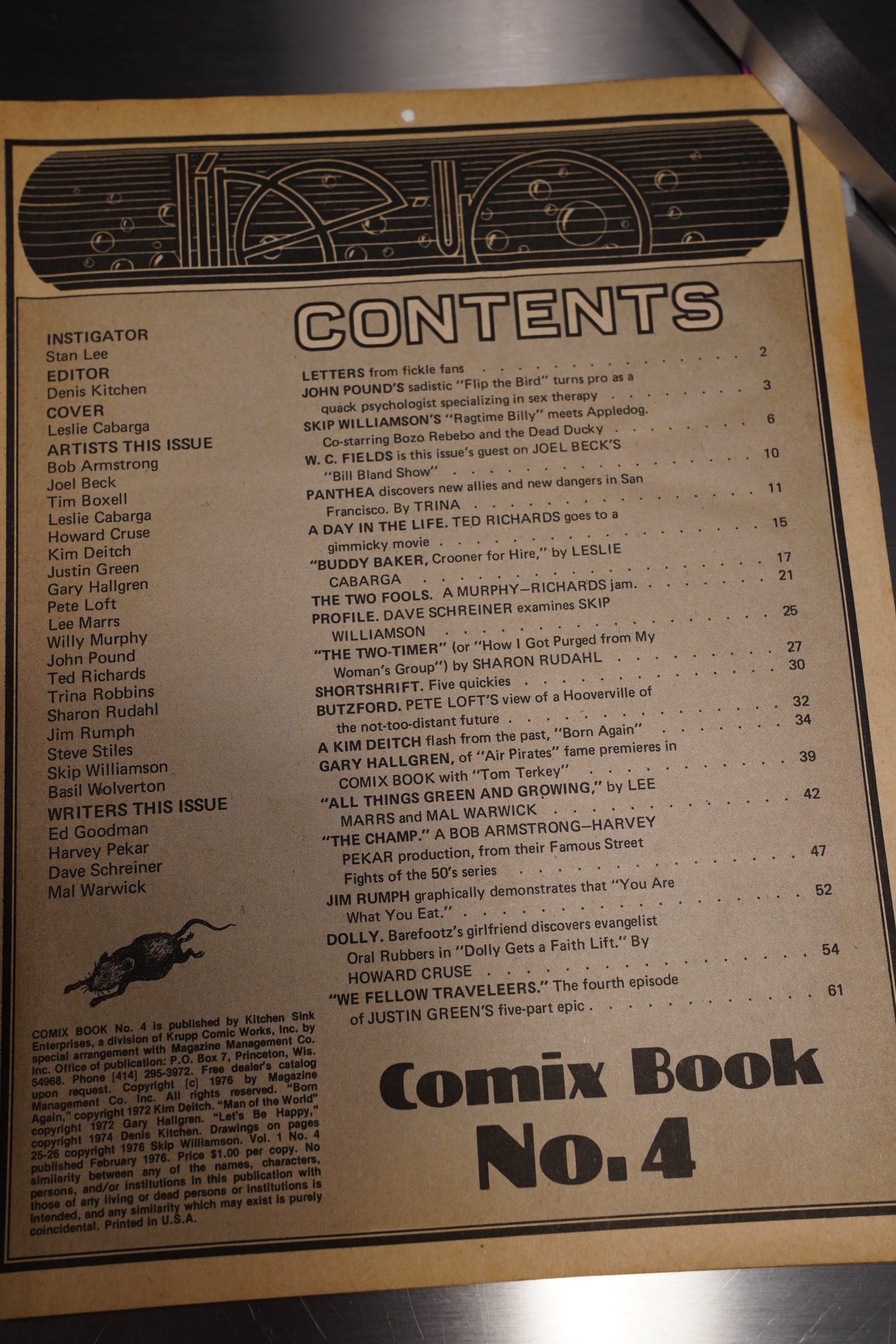 As you’d expect, it looks a lot more professional than Kitchen’s other books. 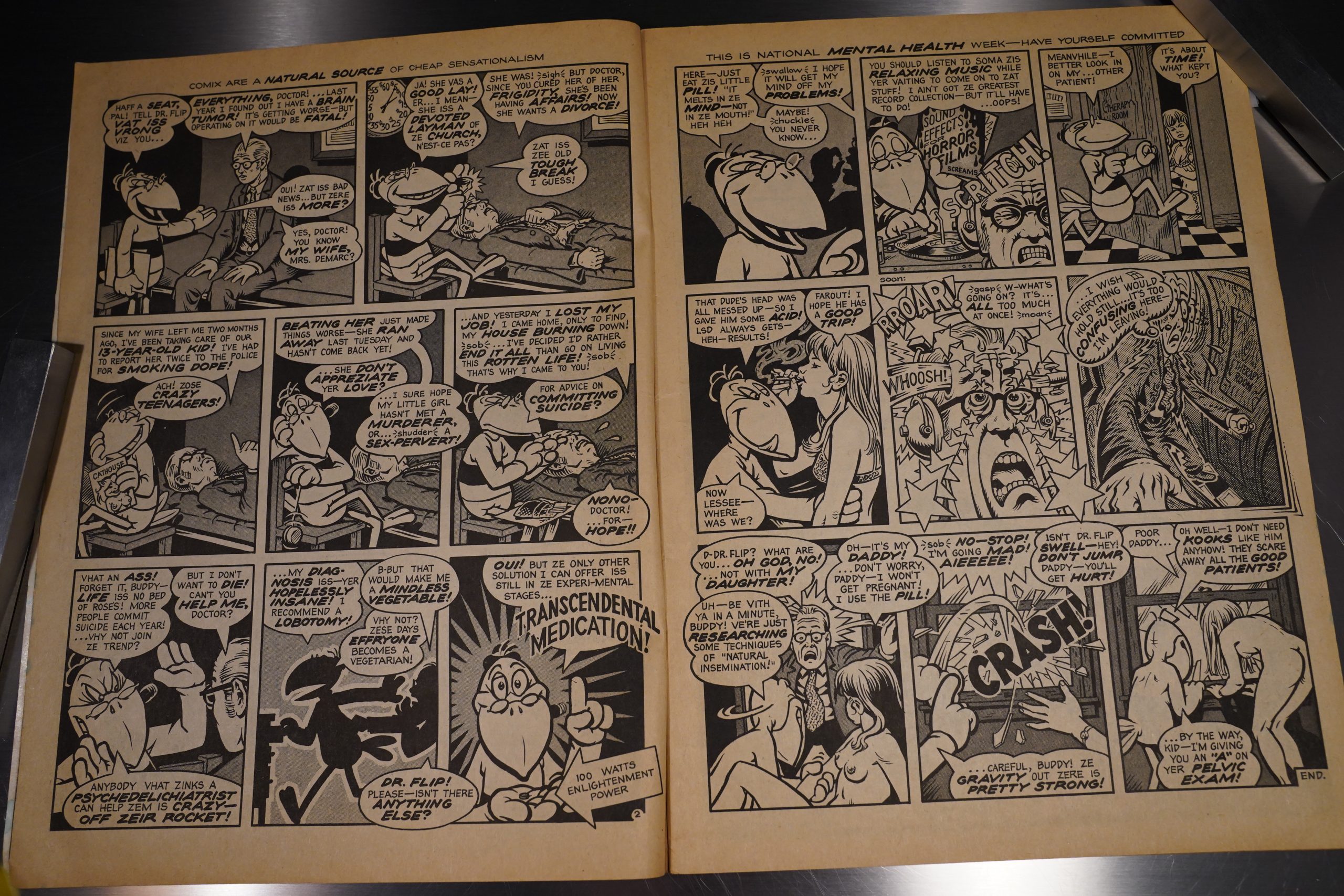 The main problem is — how do you do undergrounds while still make something palatable for sale in a supermarket? And… the formula they landed on is, not very surprisingly, short humour strips, some of which are about sex (but nothing very risque). (John Pound.) 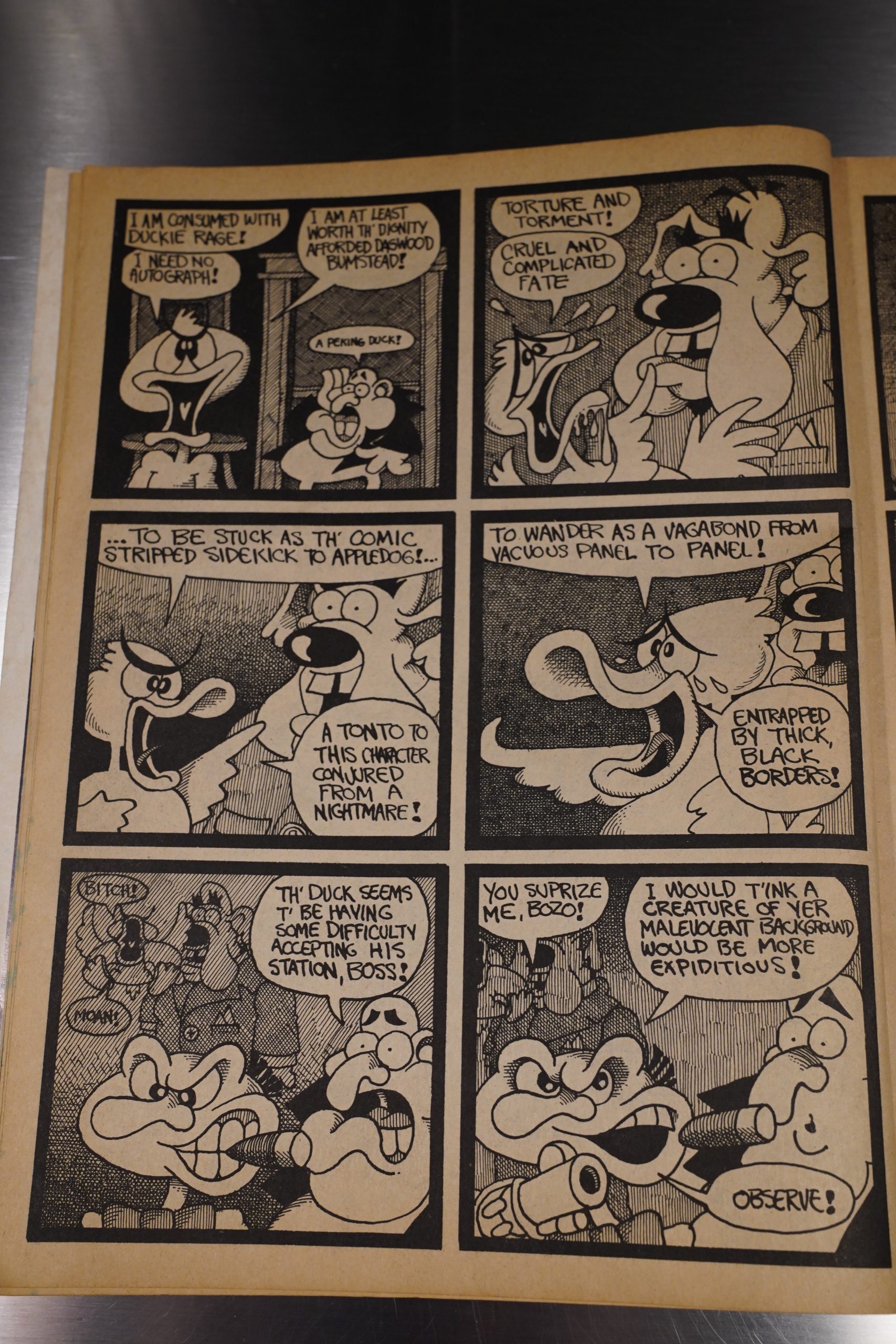 You’d expect the artists to try to straighten stuff out slightly, but Skip Williamson’s pieces (which are the longest ones) are pretty impenetrable. 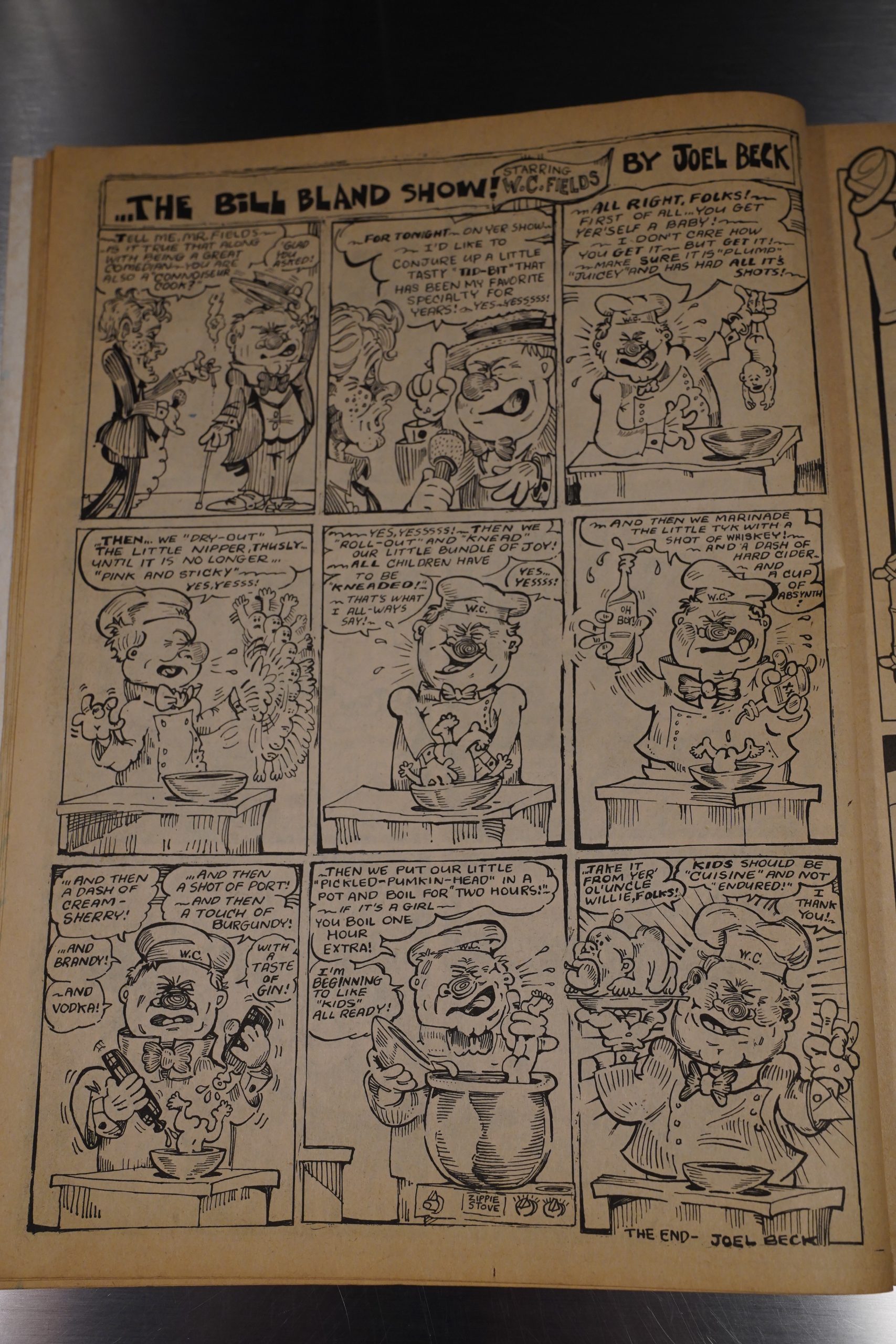 Ick. (Joel Beck.) I guess something like this (fortunately) wouldn’t go over well in Mad Magazine, for instance, but… that’s a long way around to get to a lame pun, isn’t it? 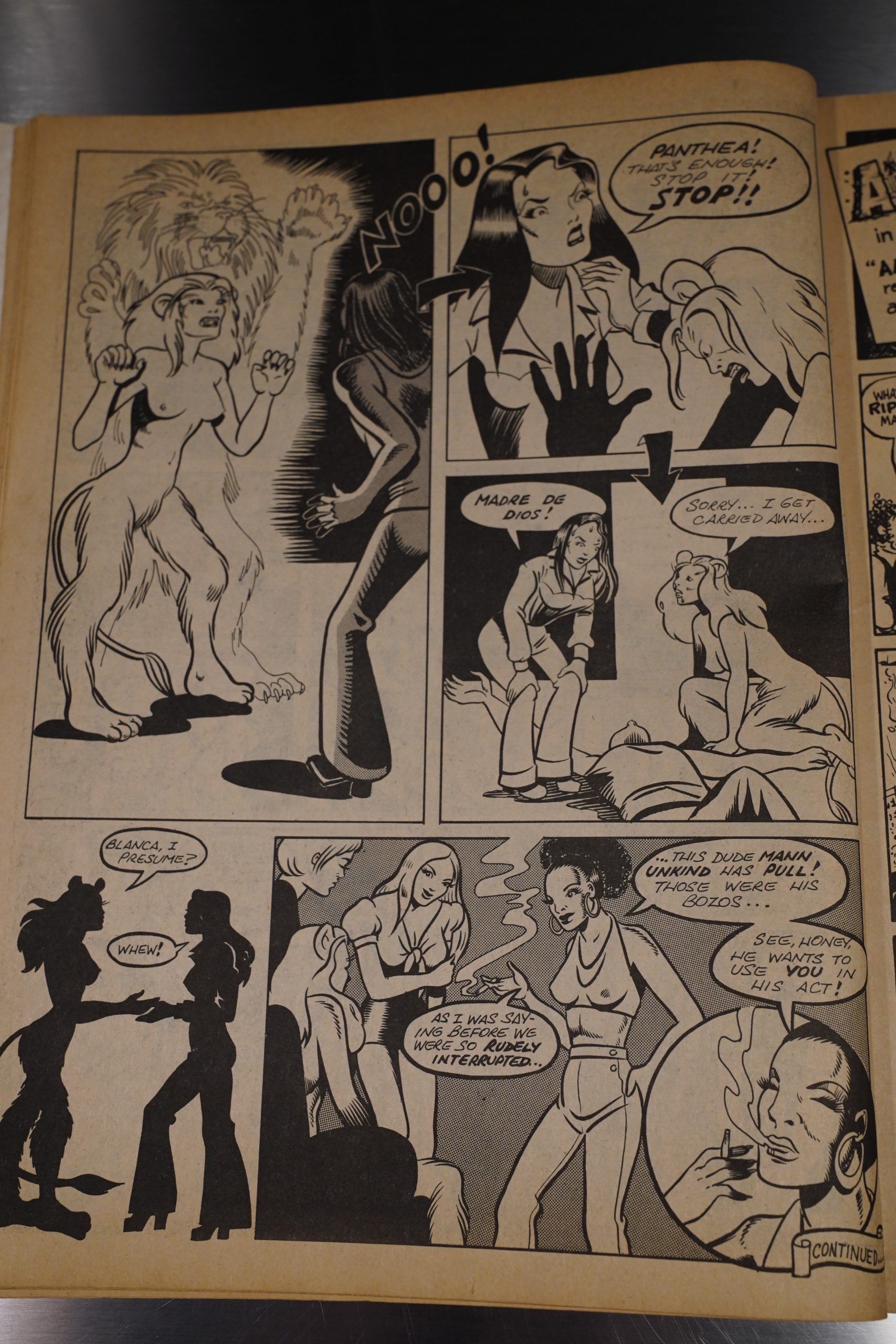 Right, here’s the Trina Robbins serial that was collected in Trina’s Women. 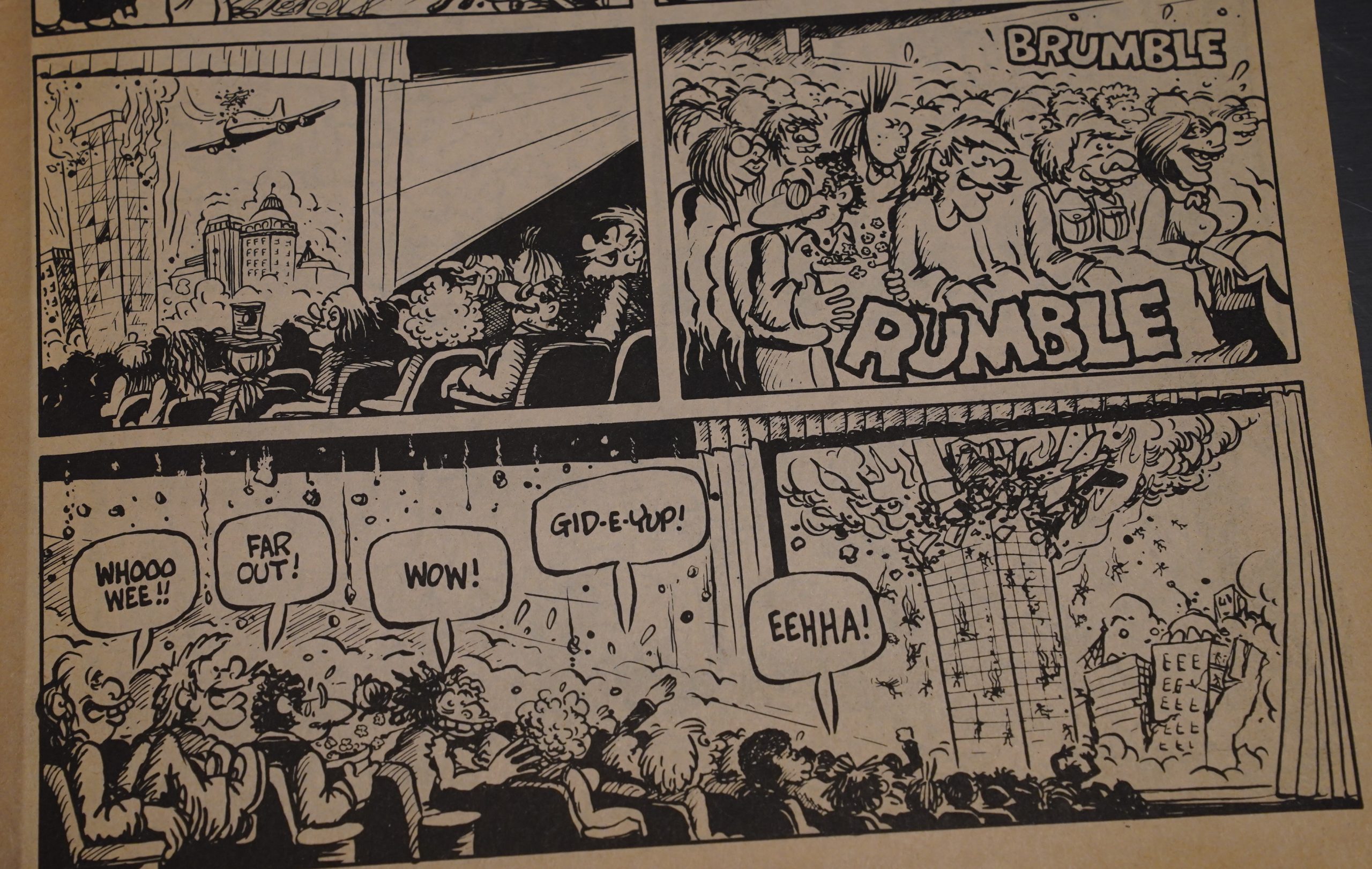 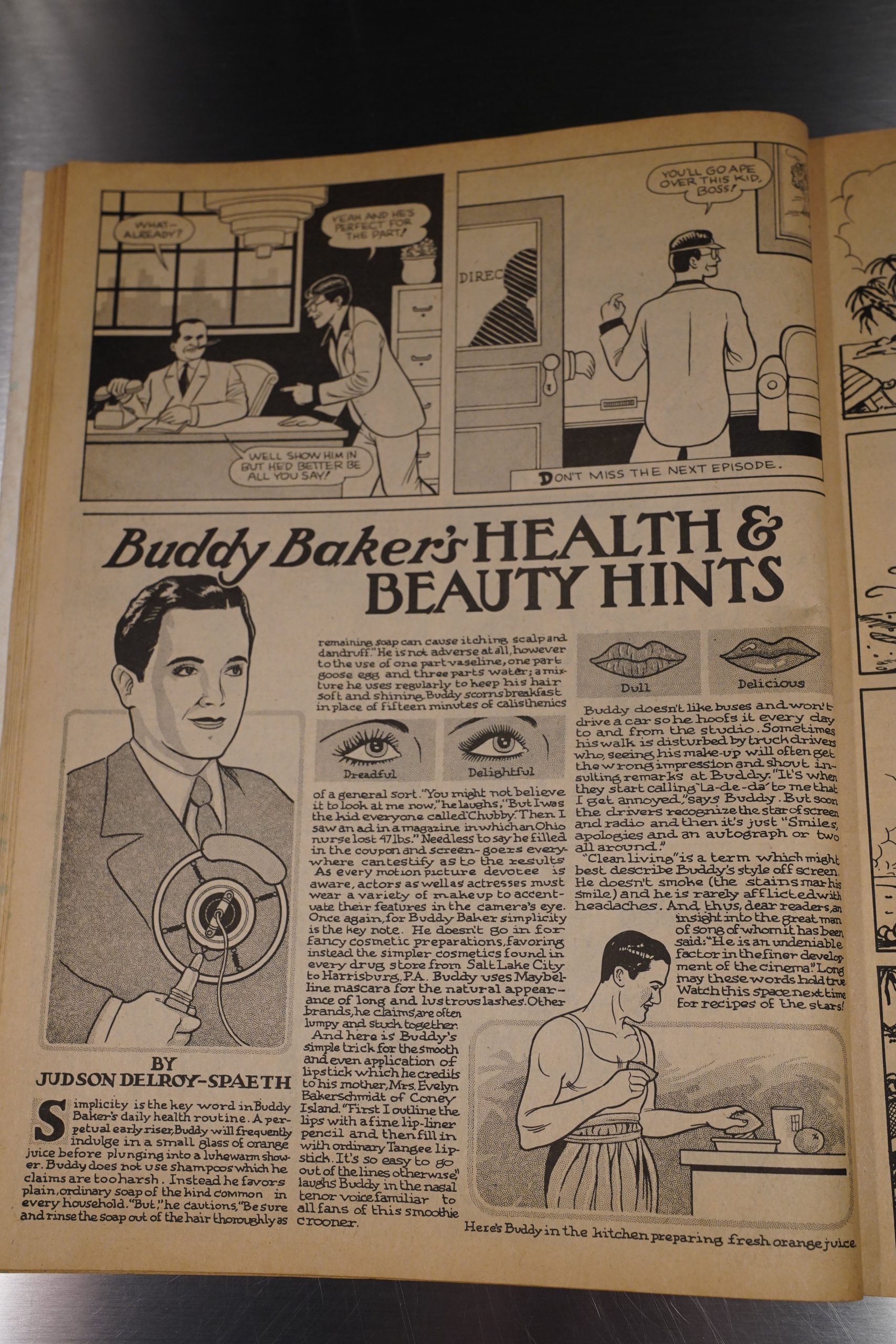 (Leslie Cabarga.) There’s quite a variety of approaches to comics featured here, but it’s not really a good read? Virtually all the pieces are three or four pages, and the book has no flow. It seems totally random. 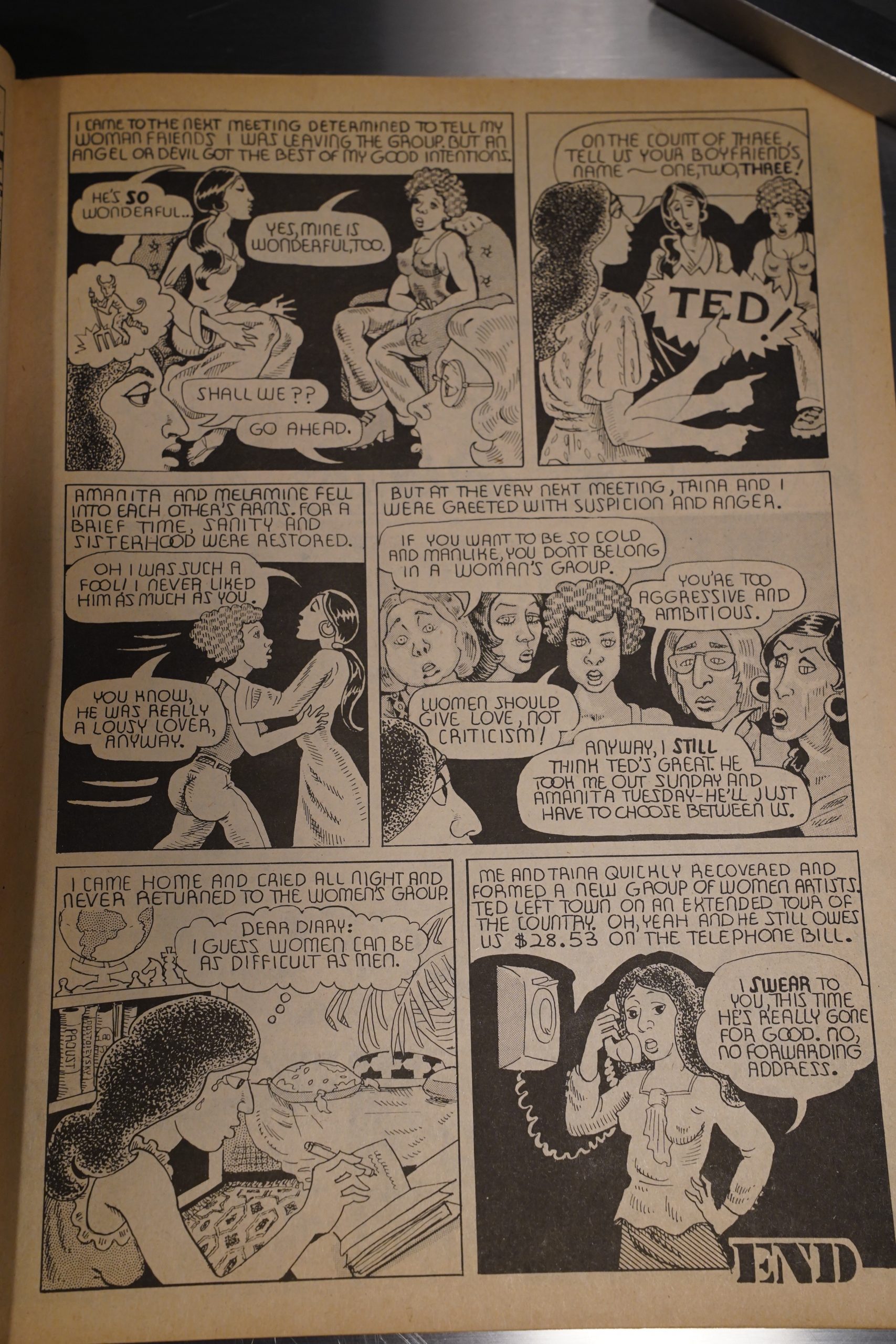 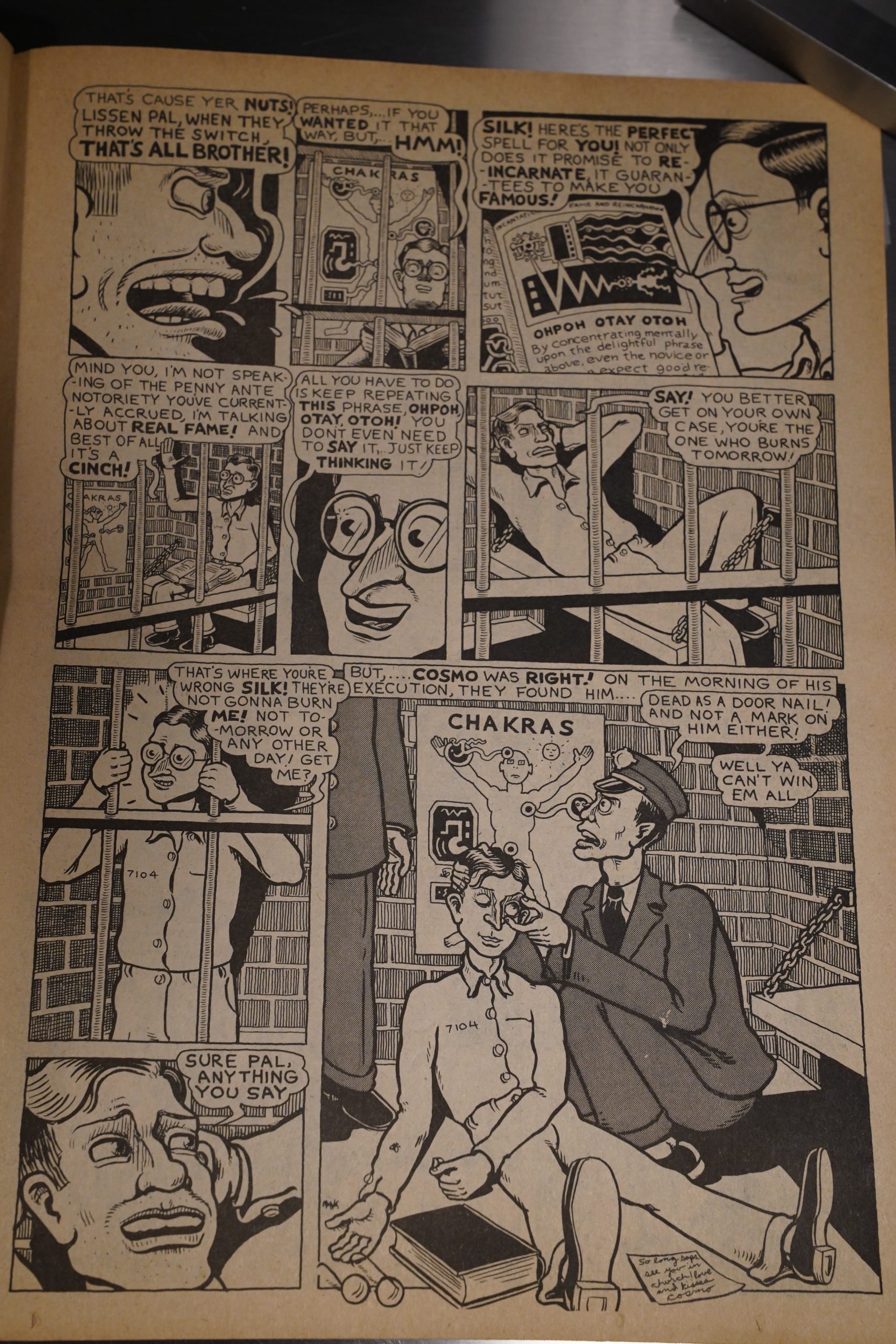 But I do like seeing more of Kim Deitch’s earlier, goofier work. Not that I don’t like his later Waldoverse stuff, but this is certainly different. 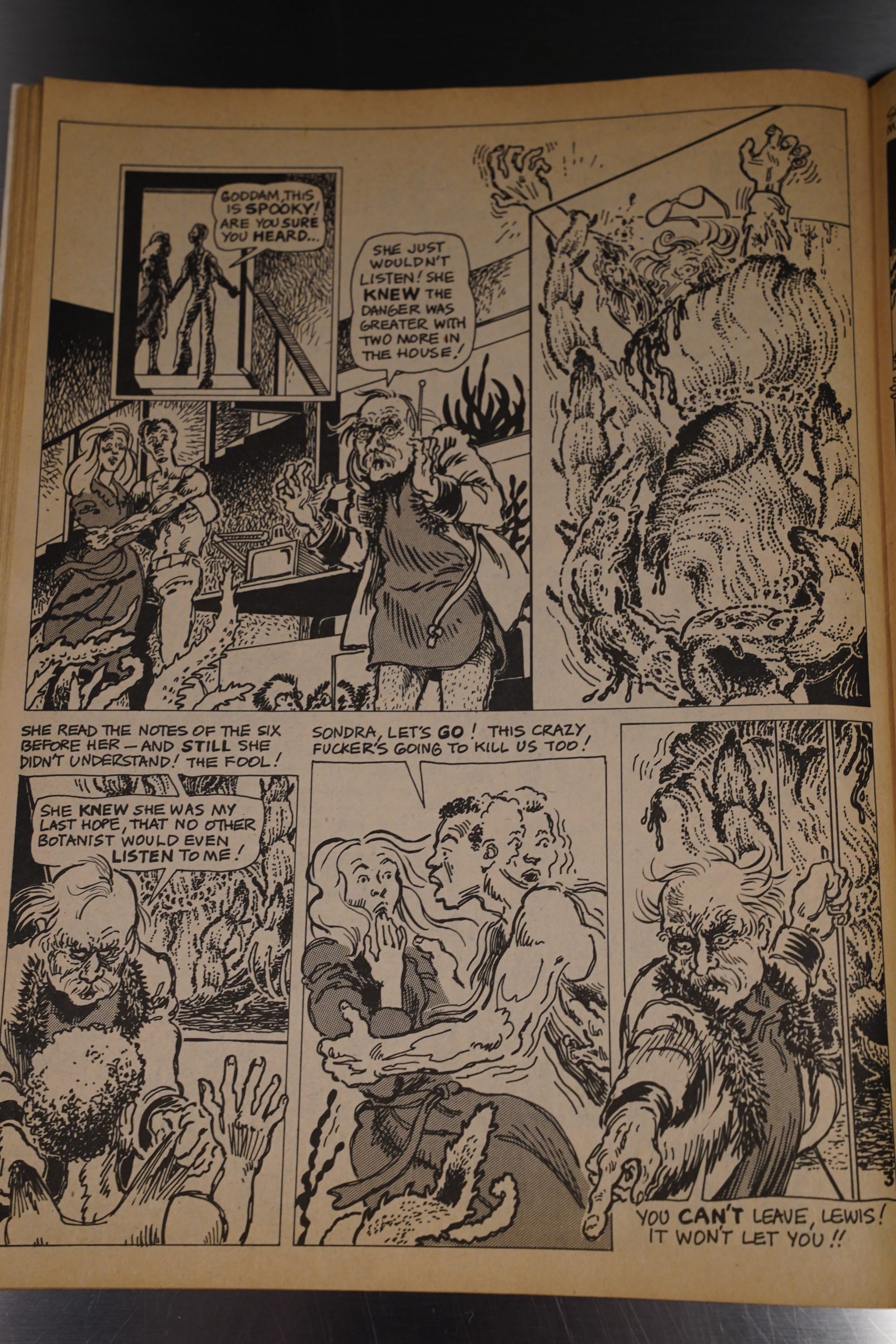 (Lee Marrs and Mal Warwick.) Pretty uniquely for a book like this, there’s more than one woman contributing work. If I counted correctly, there’s three in this issue, which means that it’s an infinite percentage more than most underground anthologies at the time. 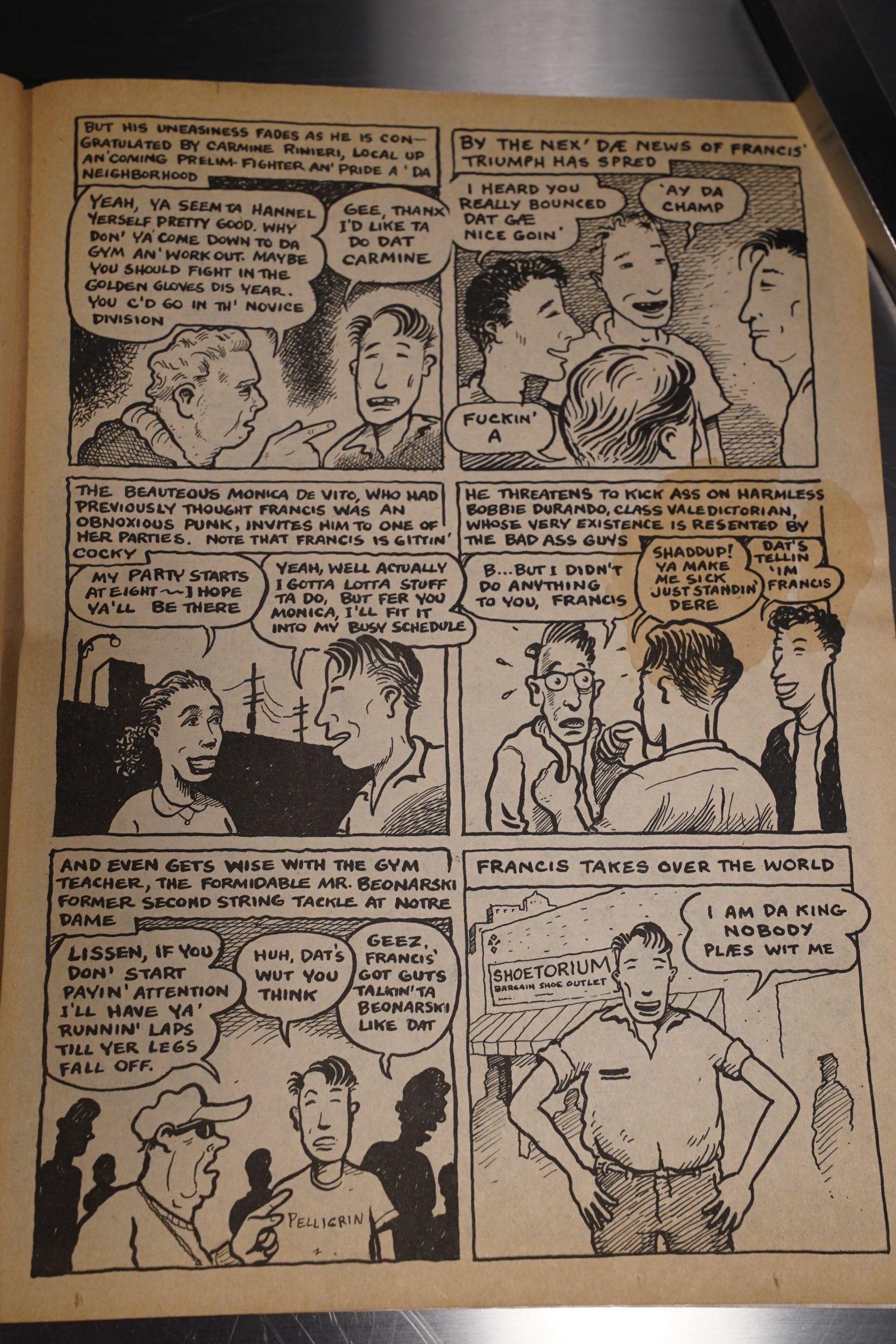 Hey! Harvey Pekar! (and Robert Armstrong). It’s a very untypical story for him. 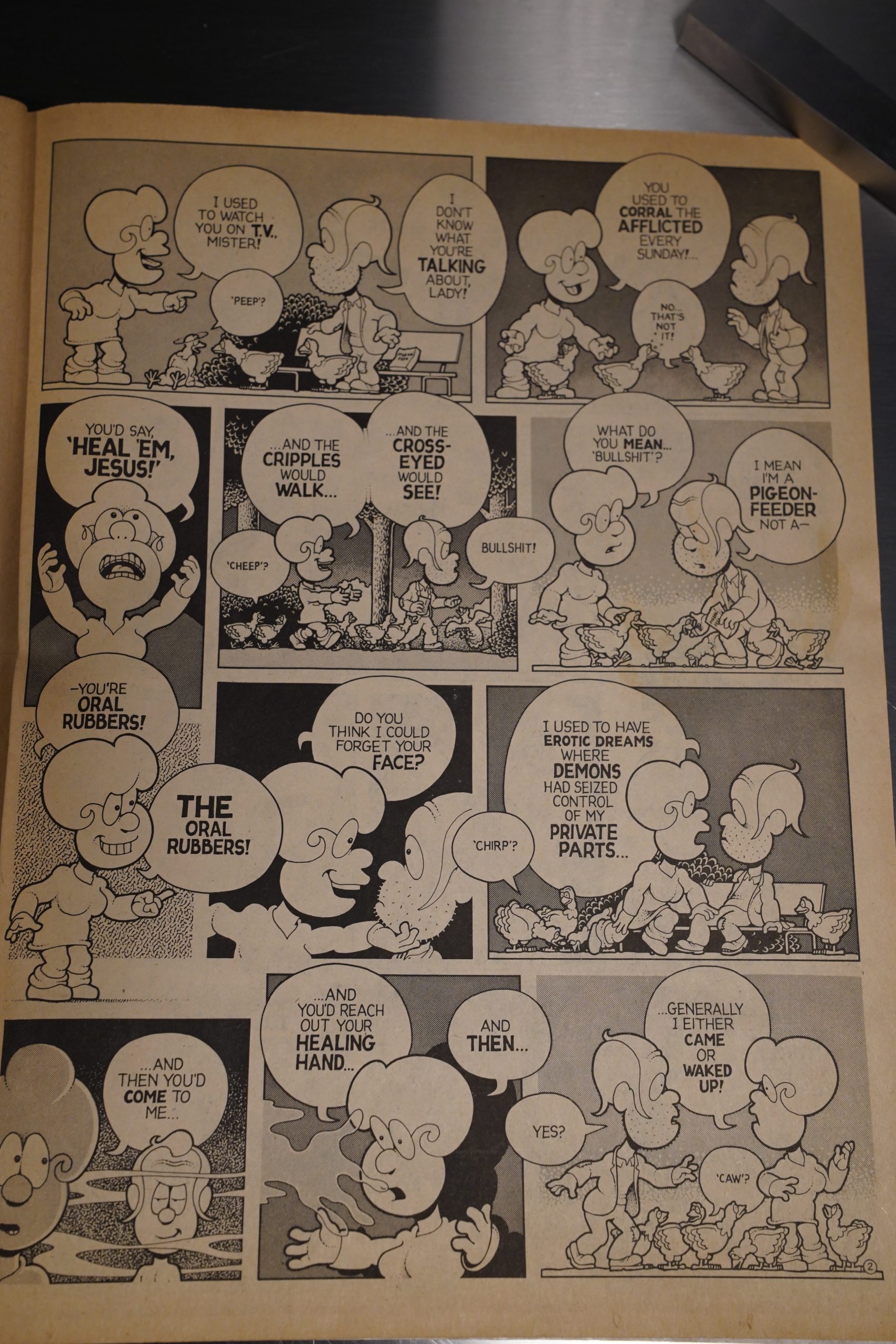 Howard Cruse does some Barefootz… 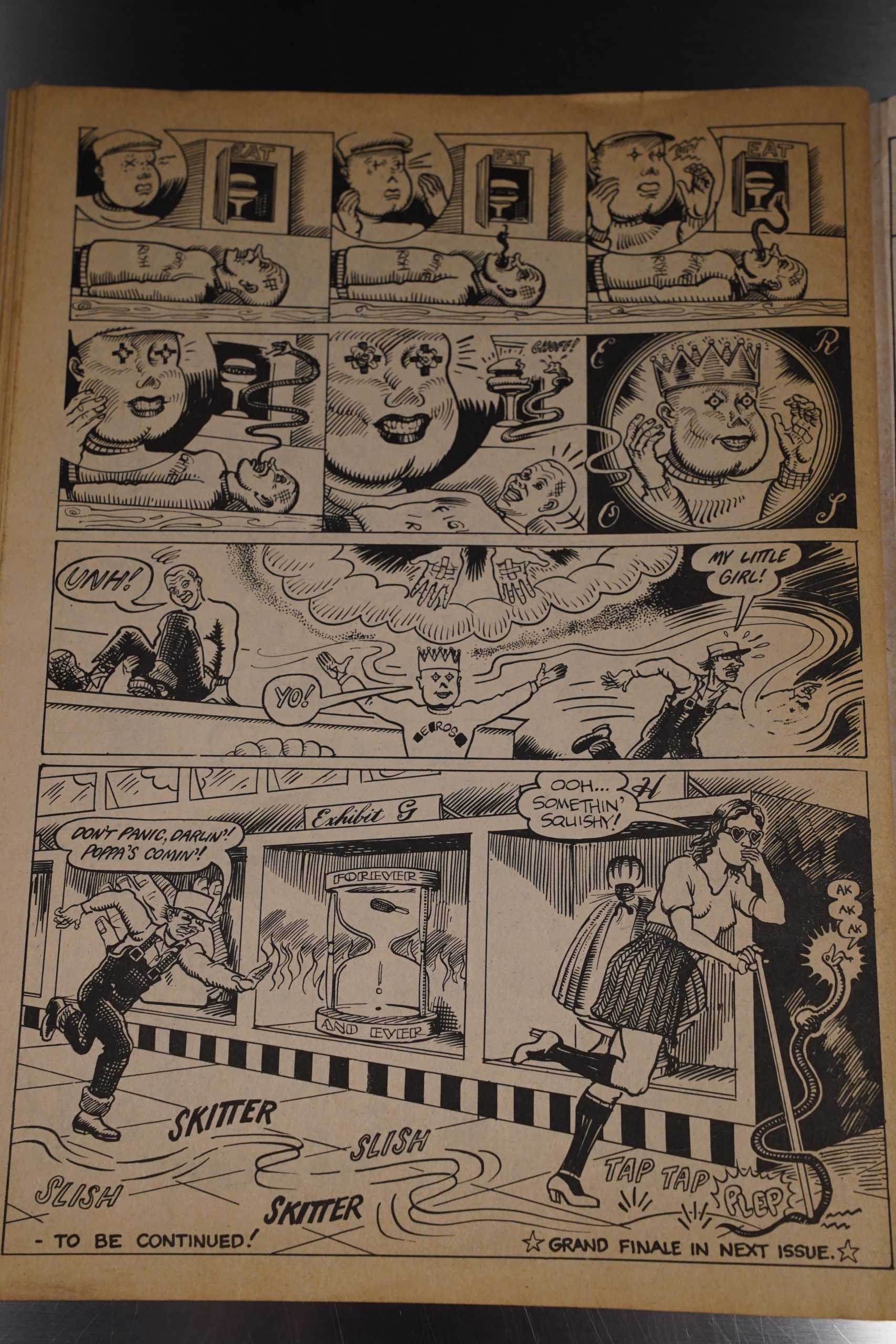 … and there’s a five part Justin Green serial over the run of the magazine. It’s the weirdest thing I’ve seen Green do.

In the final issue, Kitchen explains that Marvel retained copyright of the work in the first four issues, but that he managed to convince Stan Lee to relinquish copyright… and that the book was cancelled two weeks later. (Cause/effect unknown.)

“This copyright barrier was a major handicap in attracting top underground talent to the magazine.” So… Kitchen is saying that the contributors to the first four issues weren’t top talent? Ooookay…

Heh. After Comix Book was cancelled, a couple people too their work to Arcade, who published it before Kitchen did. 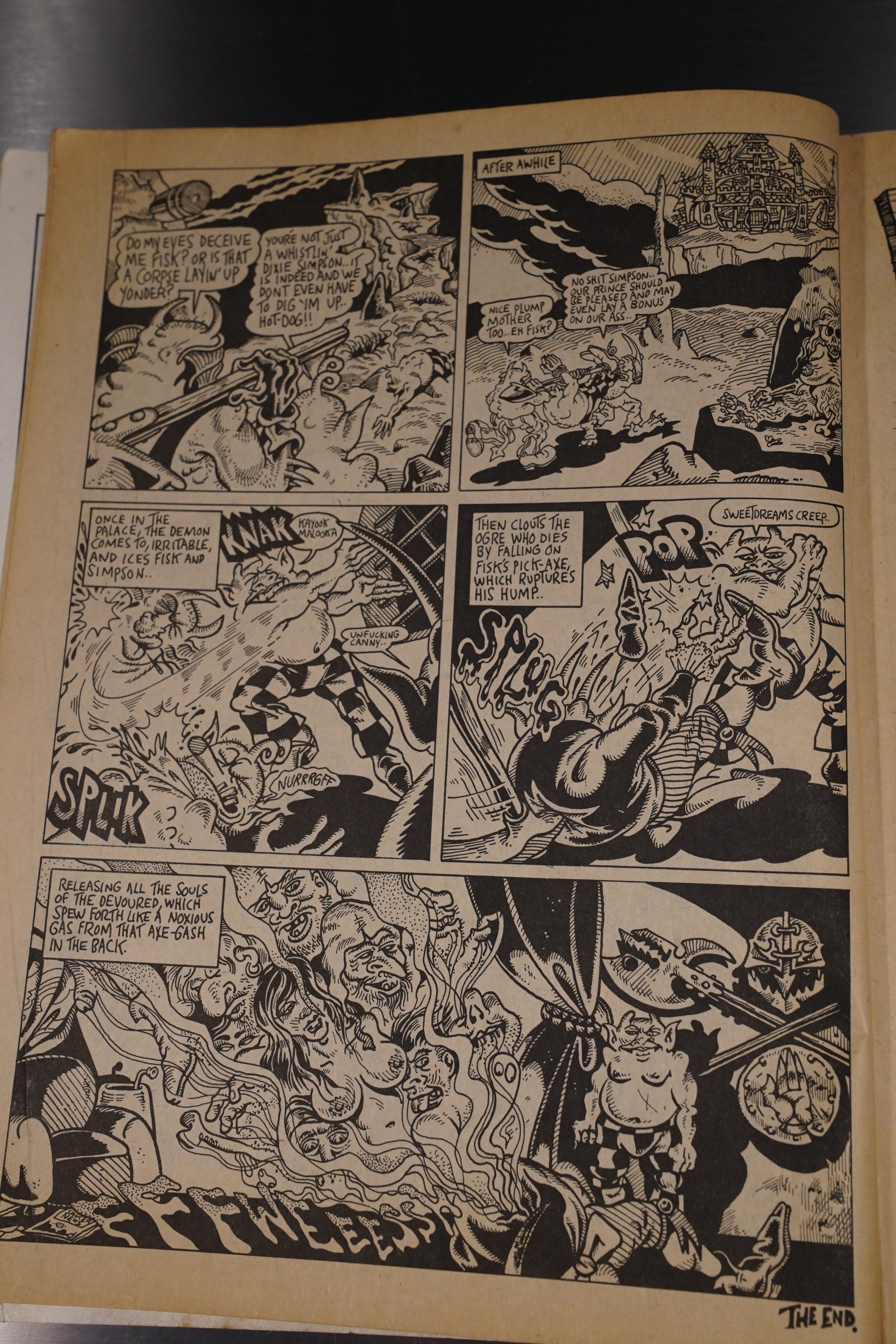 The only “top talent” new in the final issue is S. Clay Wilson, I guess? (I assumed that “top talent” was a euphemism for “R. Crumb”, but I guess Wilson also qualifies.) 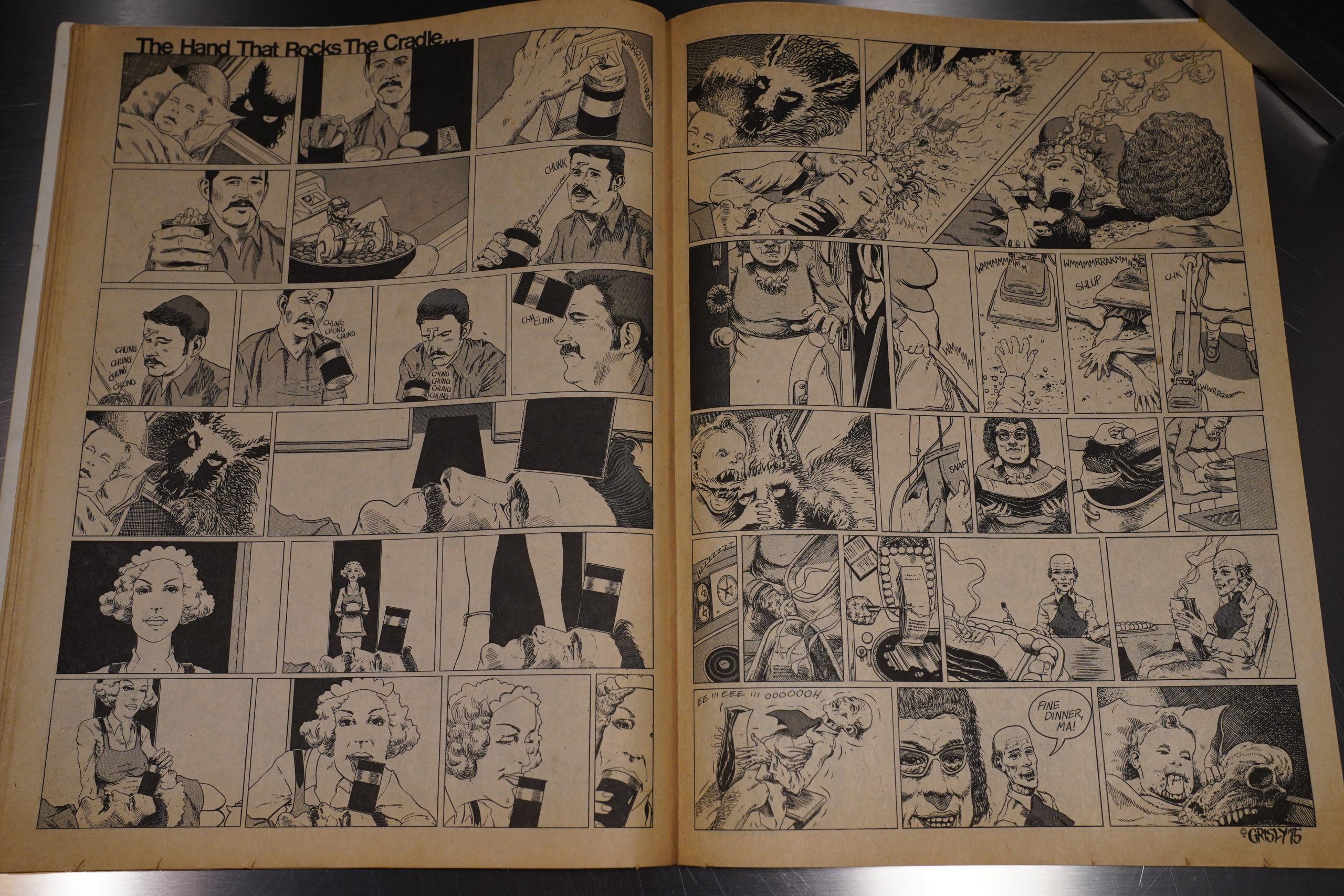 Tim Boxell does a really, really weird two-pager. And… I think the first page is really fascinating, but the second feels a bit random. 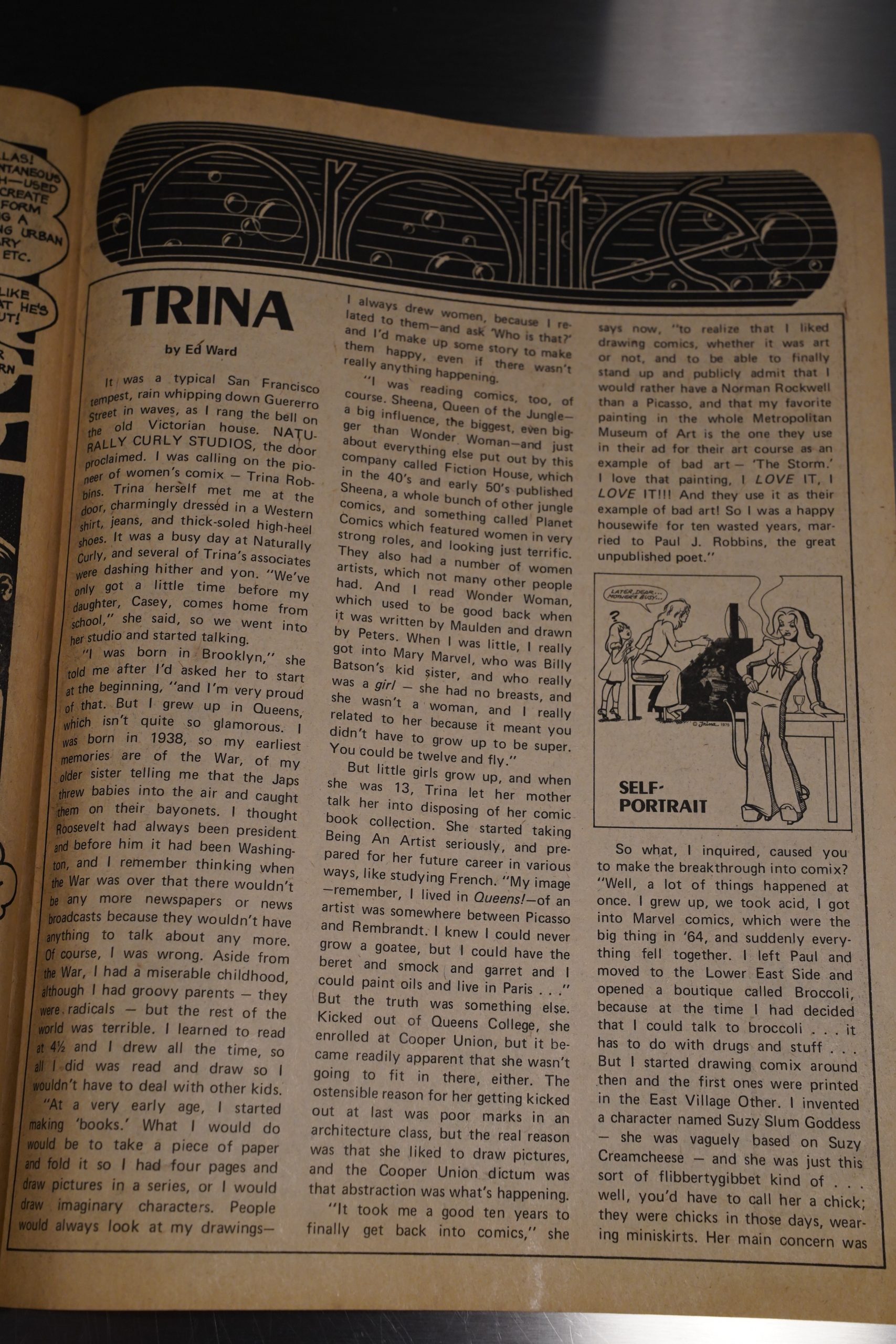 And Trina Robbins is interviewed.

But otherwise the fourth and fifth issues are very, very similar, so I’m not sure that dropping the copyright thing helped much?

A bit more than half of the material in Comix Book was reprinted in 2013 in the Best of Comix Book: When Marvel Comics Went Underground book.

This is the thirty-second post in the Entire Kitchen Sink blog series.