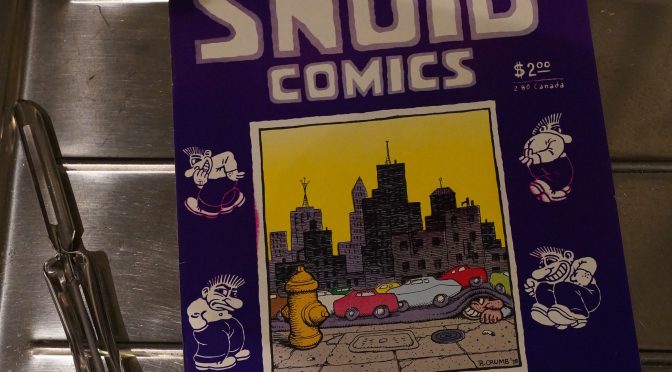 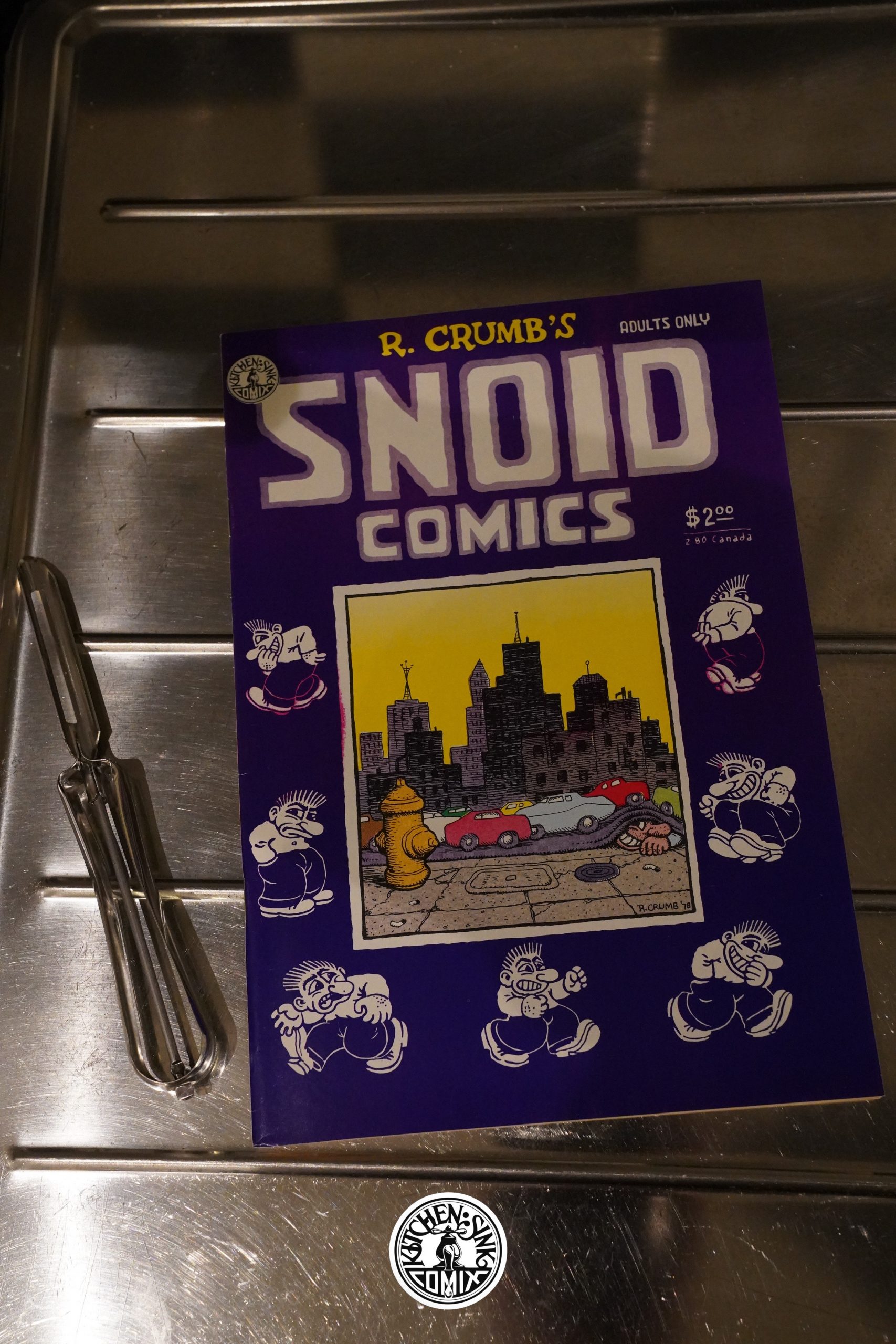 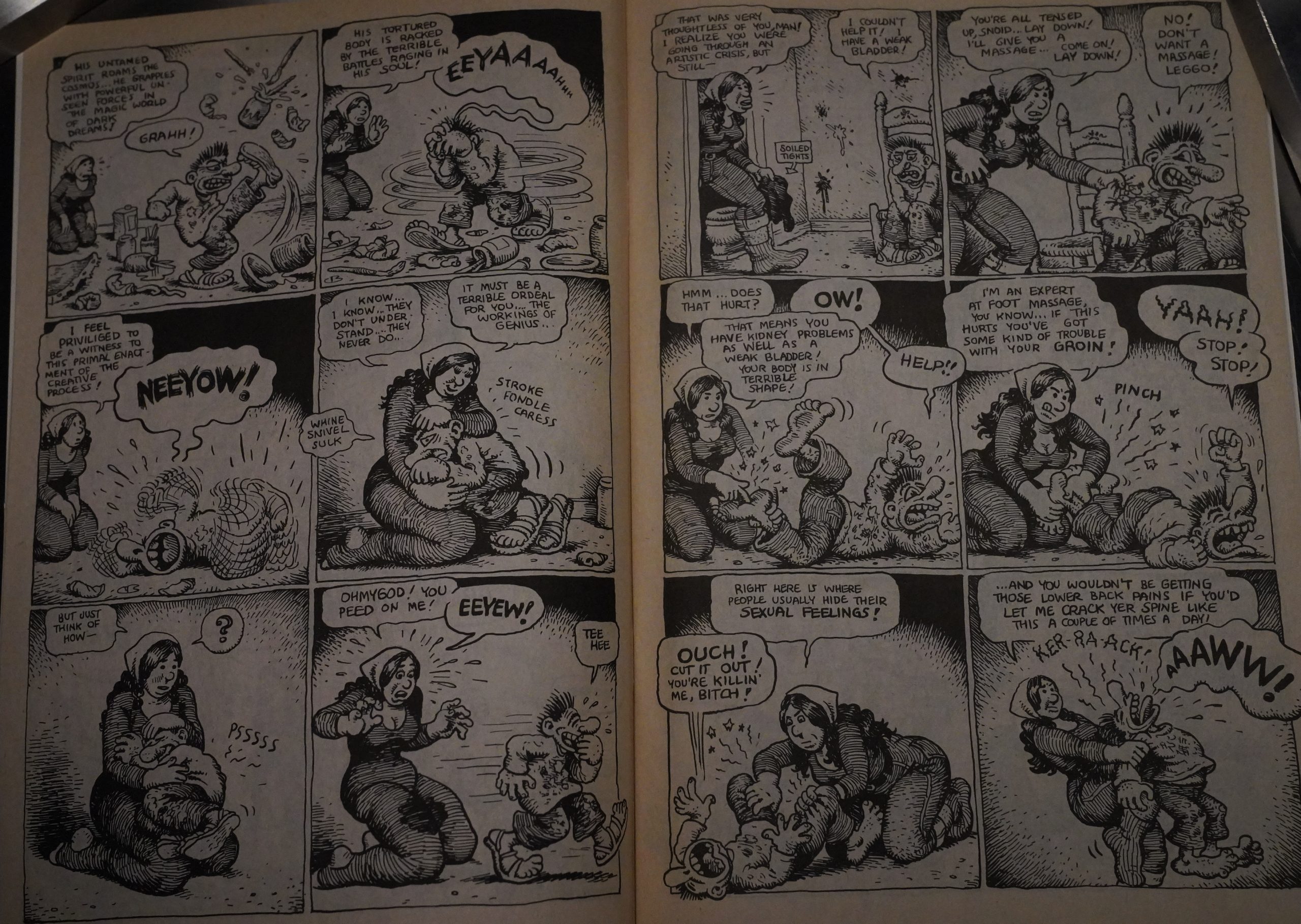 This is Crumb’s final solo book for quite a while. He wouldn’t start doing those again for the better part of a decade — he returned with the Hup series (from Last Gasp in 1987).

I guess the Snoid is Crumb making fun of his own worst impulses? 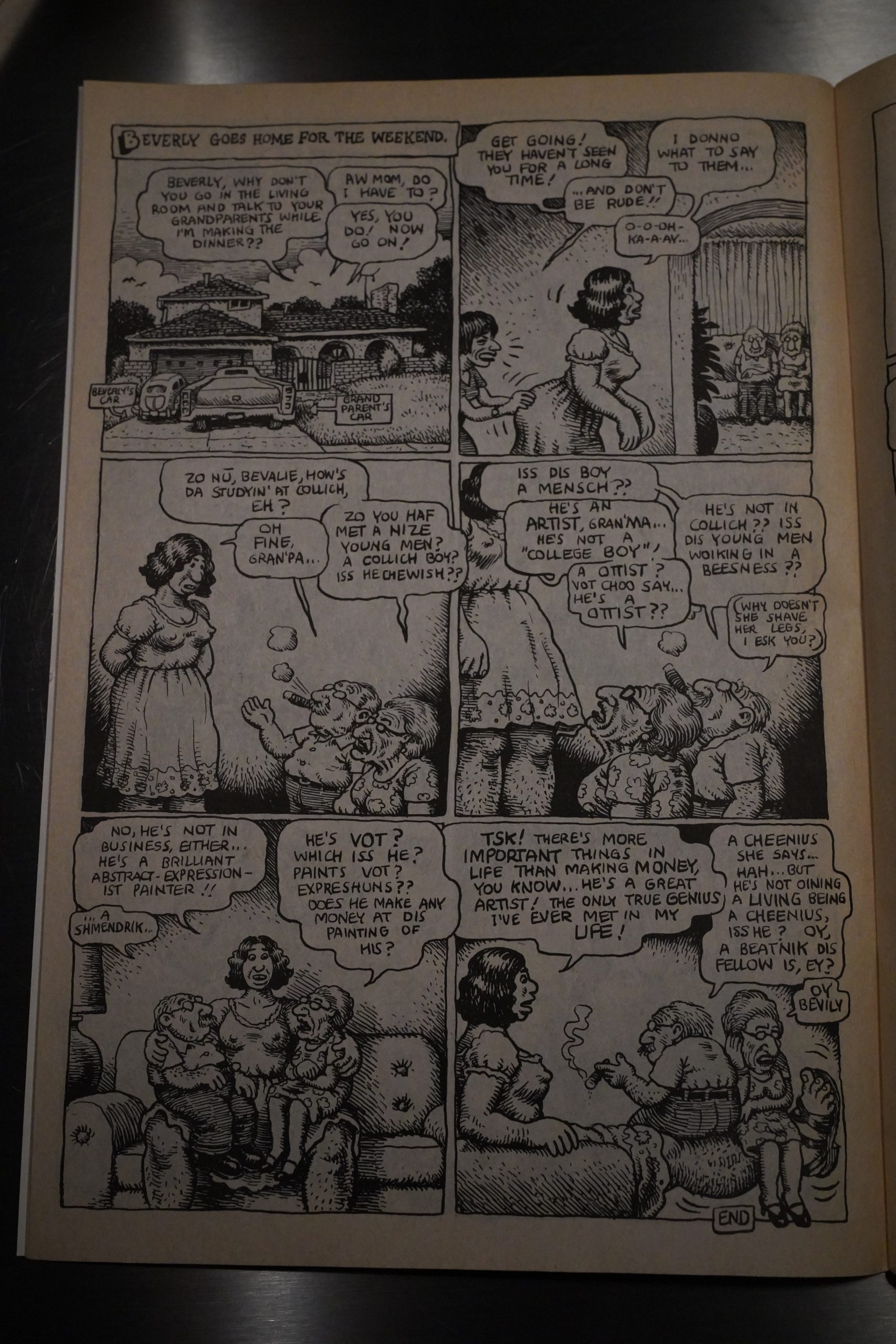 The artwork here is lovelier than ever — and that bit with the tiny grandparents is genius. But this book feels like it’s spinning its wheels: None of the stories go anywhere. They start and then they stop. 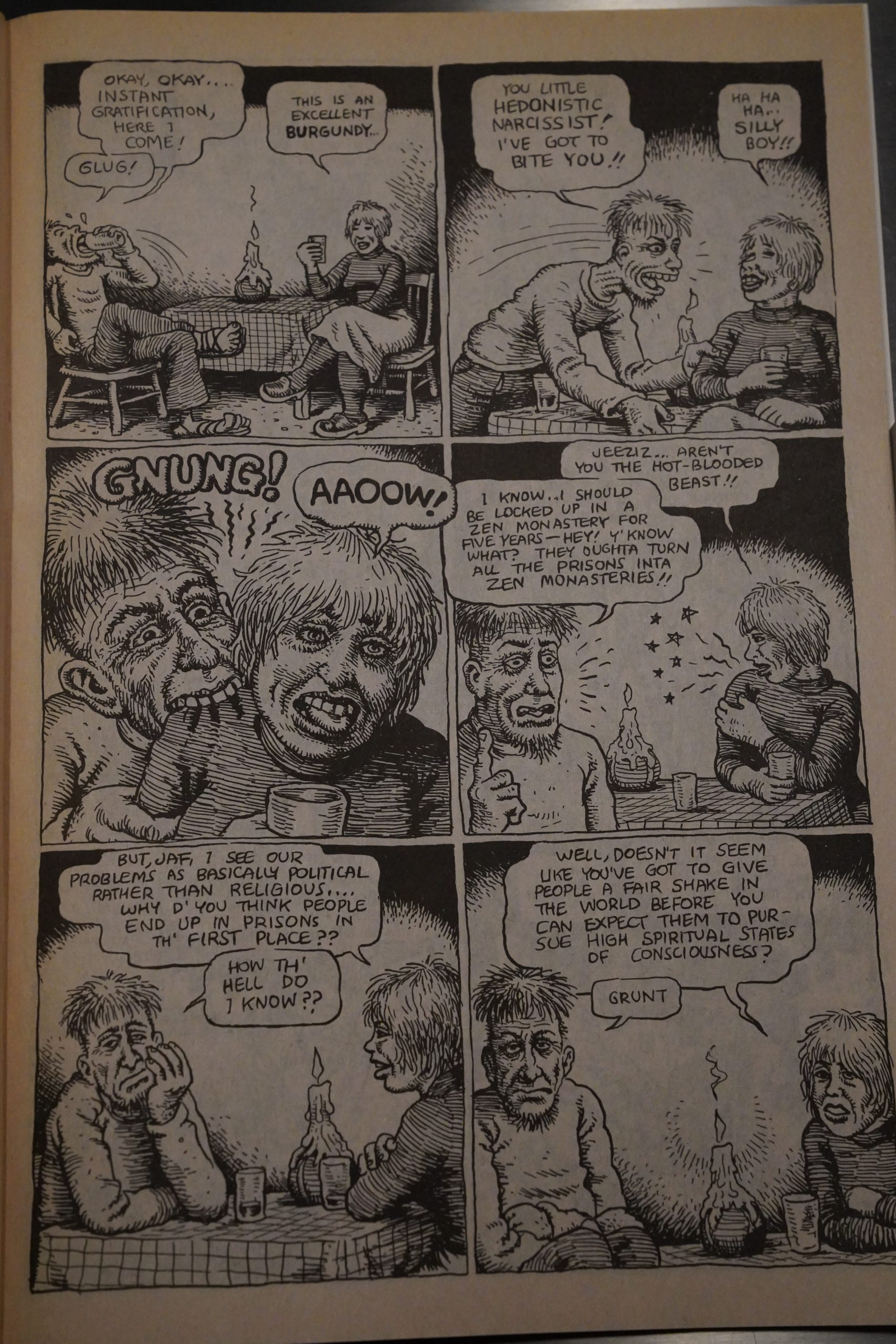 So there’s a lot of kvetching with some occasional hi-jinx.

The most memorable strip here (and I say that because it’s the only strip I can remember having read before) is this one: The Snoid roofies and abuses a prostitute, and first it’s played for yuks… and then it ends on a melancholic, sorrowful note, as if Crumb is apologising for what he’s put her through.

It’s an odd book, even as Crumb solo books go, and I can see why Crumb stopped doing these for a while. (But I guess most of his work ended up in Weirdo in the 80s.)

For an entertainment book, the
fantasies in Snoid Comics are
€emarkably mundane. No vulture
demonesses or female Bigfeet , just
a series of male Ifemale confronta—
tions with the male coming out on
top. Virtually all four of Snoid’s
character strips contain at least one
moment of physical abuse to women
(“D’you feel better now that you’ve
pounded my butt?” Boopsy Bear
asks her male paramour. “Yup…
a hundred percent… released my
pent—up male aggression,” he
patly answers) , but the arrange—
ment isn’t reciprocal. The only time
a woman appears physically threat—
ening is when it’s inadvertant, as
when the Snoid yells under
Beverly’s well-meaning body
massage. Only “Bohemian” gives
any hint why its femme lead tolerates
the situation (in the second Snoid
story, Crumb’s spared the need by
making his female victim a Black
prostitute) . In the tale’s final page
we see Beverly visiting her sub—
urban Jew parents and grand-
parents, the latter being just as
small as the Snoid and just as prone
to use Bev as a piece of furniture.
The scene may have personal depth
for Crumb, but it’s pretty limp
conclusion for the rest of us. And
it doesn’t explain why the rest of
the book’s relationships reiterate
the same basic actions. Are all men
Snoids? Are all women Beverlies?
Not bloody likely, but that’s the
Everyman Crumb seems
to be frittering with.

SHERMAN: This brings us into a discussion Of Krupp’s
relationship with some of its other artists. Well. the first
would be Crumb.
KITCHEN: There’s another guy it’s been a great
privilege to Work with. I think that the term people
always use with certain of these artists is “genius” but
I ‘d say this is another example of its being justifiable.
Of course, I also come under a lot of heat from various
sources for publishing Crumb’s Work, which is offensive
to some people.
SHERMAN: For sexist reasons, or… ?
KITCHEN: Oh, that’s one I hear very often. The latest
solo Crumb book we did was Snoid, which contained
material which some people think is his absolute worst
and his absolute best work side by side, so—
SHERMAN: Is that on artistic, or just thematic
reasons ?
KITCHEN: Well, both, but primarily thematic. The
strip “A Short HiStory of America” has been universally
praised; while some of the other material hasn’t been
universally damned, it has been severely criticized.
Crumb’s a very complex person, of course, and I can’t
explain him. You’ll have to ask him. But I still consider
it a privilege to be able to work with him closely. He’s
much more independent than most cartoonists, and he’s
probably the least likely to take editorial direction, so as
a publisher am basically faced with the prospect of
publishing it as is or not publishing it at an, and 1 can’t
imagine myself turning down a Crumb because I
found parts of it potentially unpopular, or offensive. It
stands as a whole and ultimately he bears responsibility
for its worth.
SHERMAN: At One point it seemed as if his relationship
with Krupp was somewhat shaky.
KITCHEN: Not really. There was a brief period where
we were in deep financial trouble and we were forced to
pay him in comic books, of all things, because that’s all
we had , and he, like everyone else, would rather spend
money at the grocery store than comic books. But that
was a brief period, when I frankly doubted we would
survive at all. This was in 1973, the famed Comics
Crash of ’73. But we did survive and every year since
we’ve grown. When year after year I would hear
predictions that underground comix were dying,
dying, dying, in fact we were grossing more than
ever. To some degree it’s true that there has been a
decline in overall sales, and it’s true that the price of
the books has gone up, thus the annual gross doesn’t
reflect sales as much as inflated dollars, but I safely
Say that we are more stable as a publishing company •than
we ever were in the past, even though in 1972 sales were
brisker. In 1972, distributors would call and literally
beg for new books, and as a younger and more naive
publisher I gave in to their demands by publishing
some questionable.books that I now am a little ashamed
to have my imprint on. But every other publisher made
the same mistake and those decisions partly contributed
to that Crash of ’73, not to mention the Supreme Court
Decision on Obscenity and other factors.
SHERMAN : Would you say that your current stability
is as much based on your more diversified operations, too?
You have three publishing companies.
KITCHEN: Yes, but I’m talking strictly about Krupp-
Kitchen Sink now .
SHERMAN : Well, it’s interesting to see how the
entities survive.
KITCHEN: Now, Krupp on its own has diversified too.
Certainly The Spirit and Bizarre Sex and Class War
Comics and Snarf and all these other things in themselves
are divergent and appeal to different audiences. I do
strive to keep our output varied and feel a responsibility
as an alternate publisher to do things that could not be
done by the major publishers , such as for example the
Gay Comia project, the Class War Comics series, and a
number of upcoming projects that I feel deserve to be
published. I feel instinctively that not all of them are
destined -to be best-sellers but some of our more popular
titles subsidize the books that deserve to do better but
don’t. I believe Bill Gaines explained that in the EC line
his personal favorites were the science fiction titles but
they sold the worst, so the horror comics in effect subsi-
dized his favorites. In a way I tend to play the same
balance as that, on a much smaller scale.

Snoid Comics is one of those post-golden age undergrounds that shows why it was still important to have undergrounds. It presents very adult comics in a smart and insightful way that is faithful to its era yet somehow still virtually timeless. While never a best seller, Snoid Comics was a steady performer that built up a cult fandom, with four printings spread over two decades.

This is the fifty-sixth post in the Entire Kitchen Sink blog series.