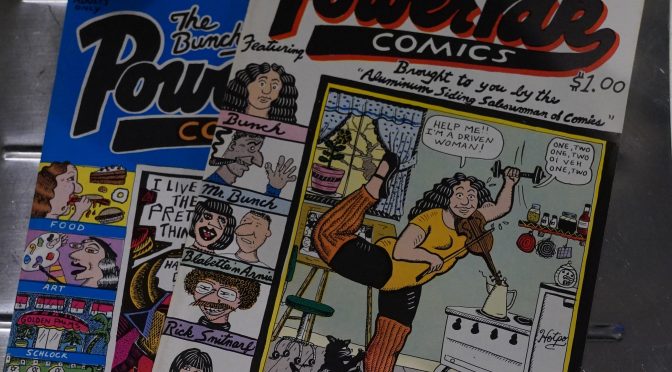 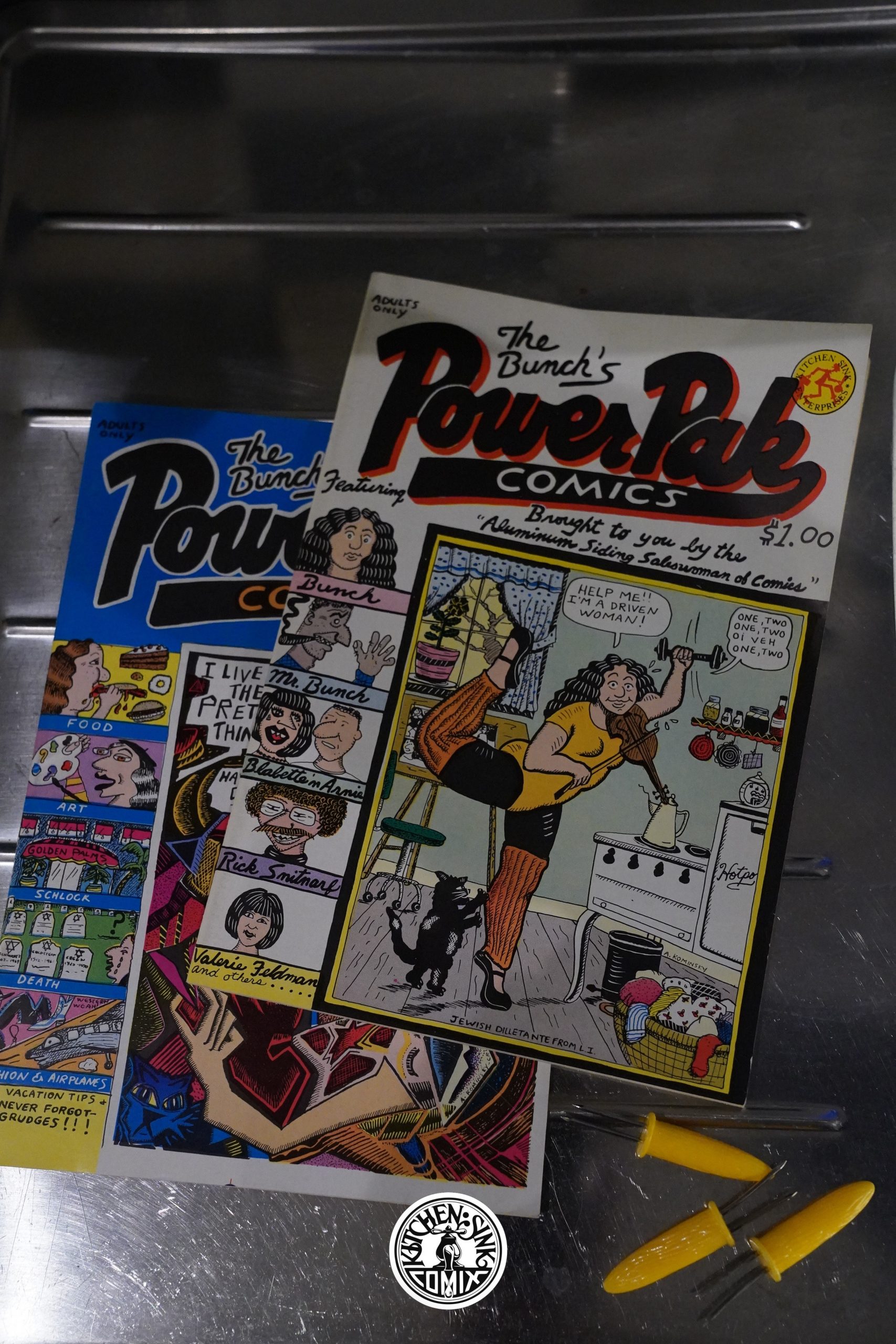 We’re inching our way closer to “my time” in this blog series. Most of the books in this series are books I haven’t read before, and that I didn’t get at the time they were published. (Because I’m so young.) But these books I got only a couple of years after publication. I was thirteen, and I was absolutely flabbergasted by them. 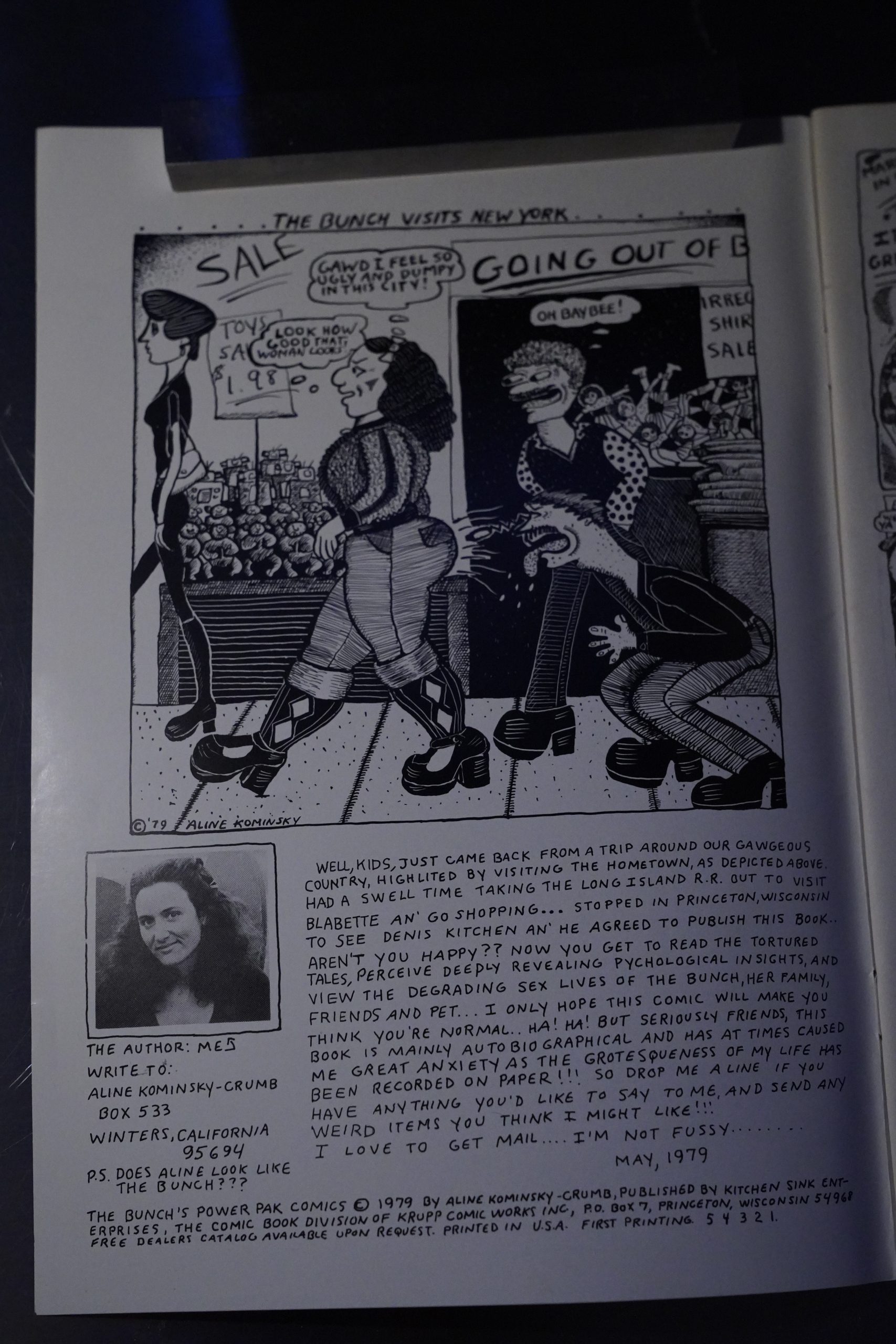 After a brief introduction (and stunning glamour shot)… 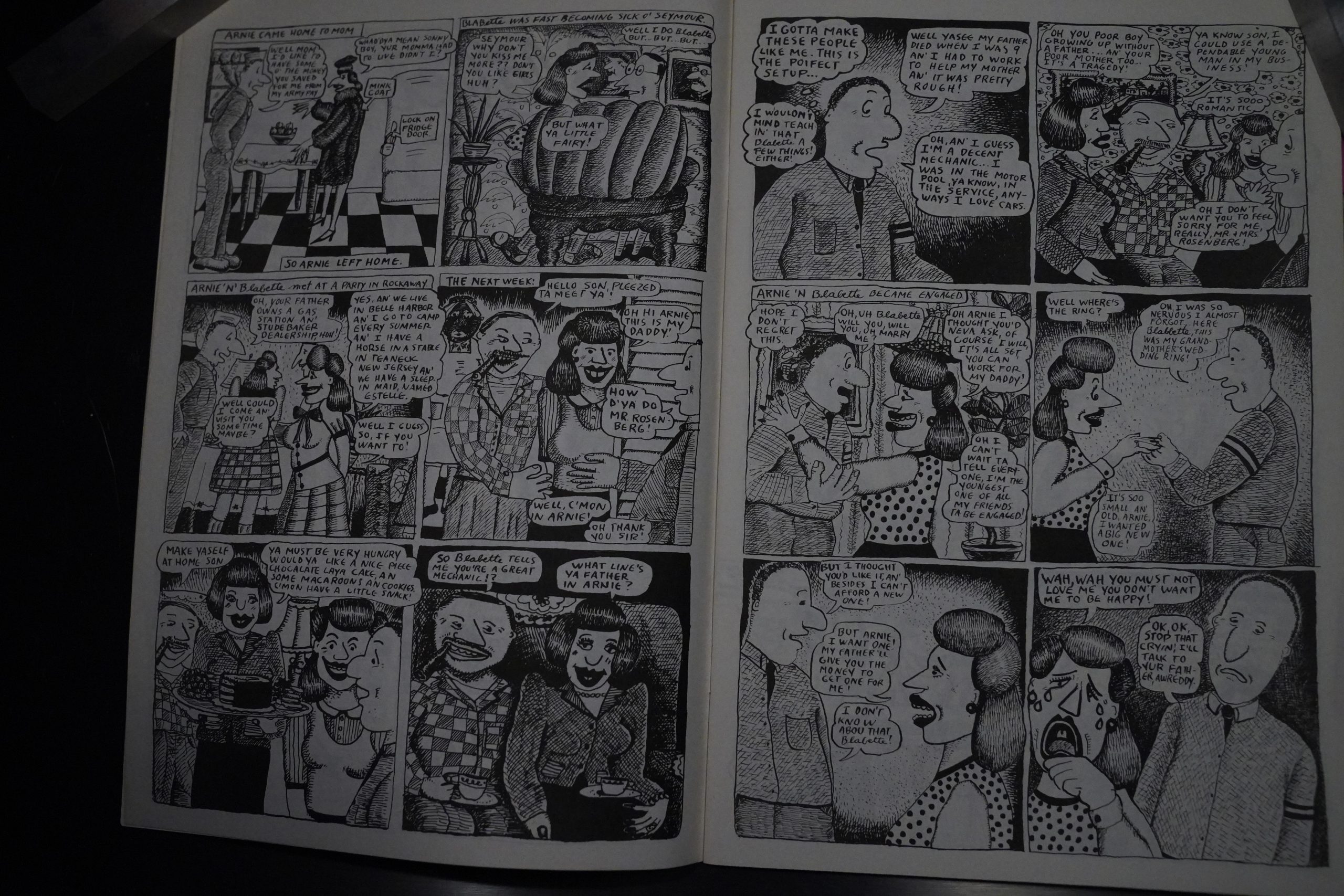 … we’re into Kominsky’s family history. More than half of the first issue is taken up by a pretty straightforward story of how her parents met, and their lives after that. I know that Kominsky was inspired by Justin Green’s autobio comics, but Power Pak feels so… naked. 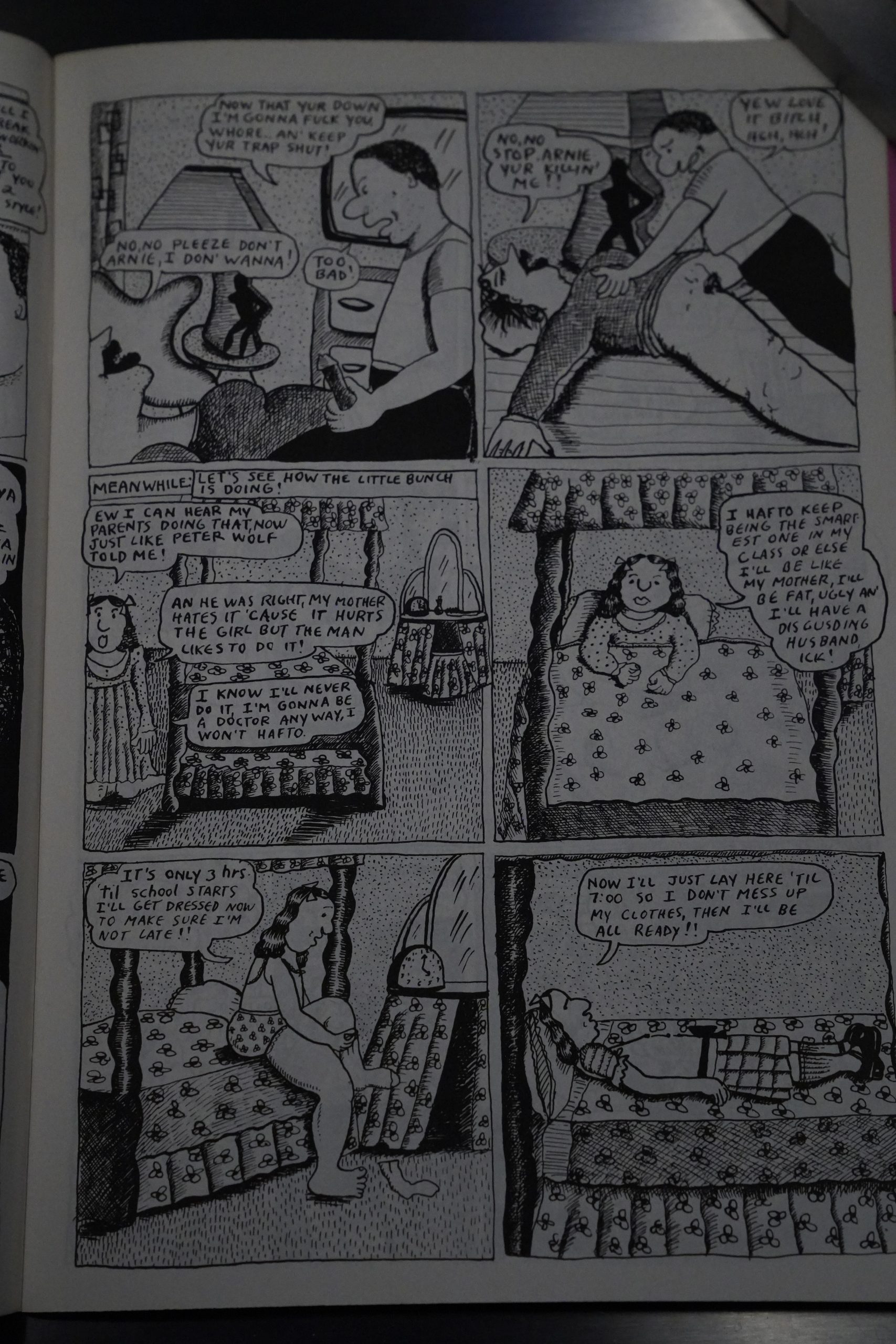 I mean, depicting her parents like this… She can’t have thought very hard about people eventually reading the comics? 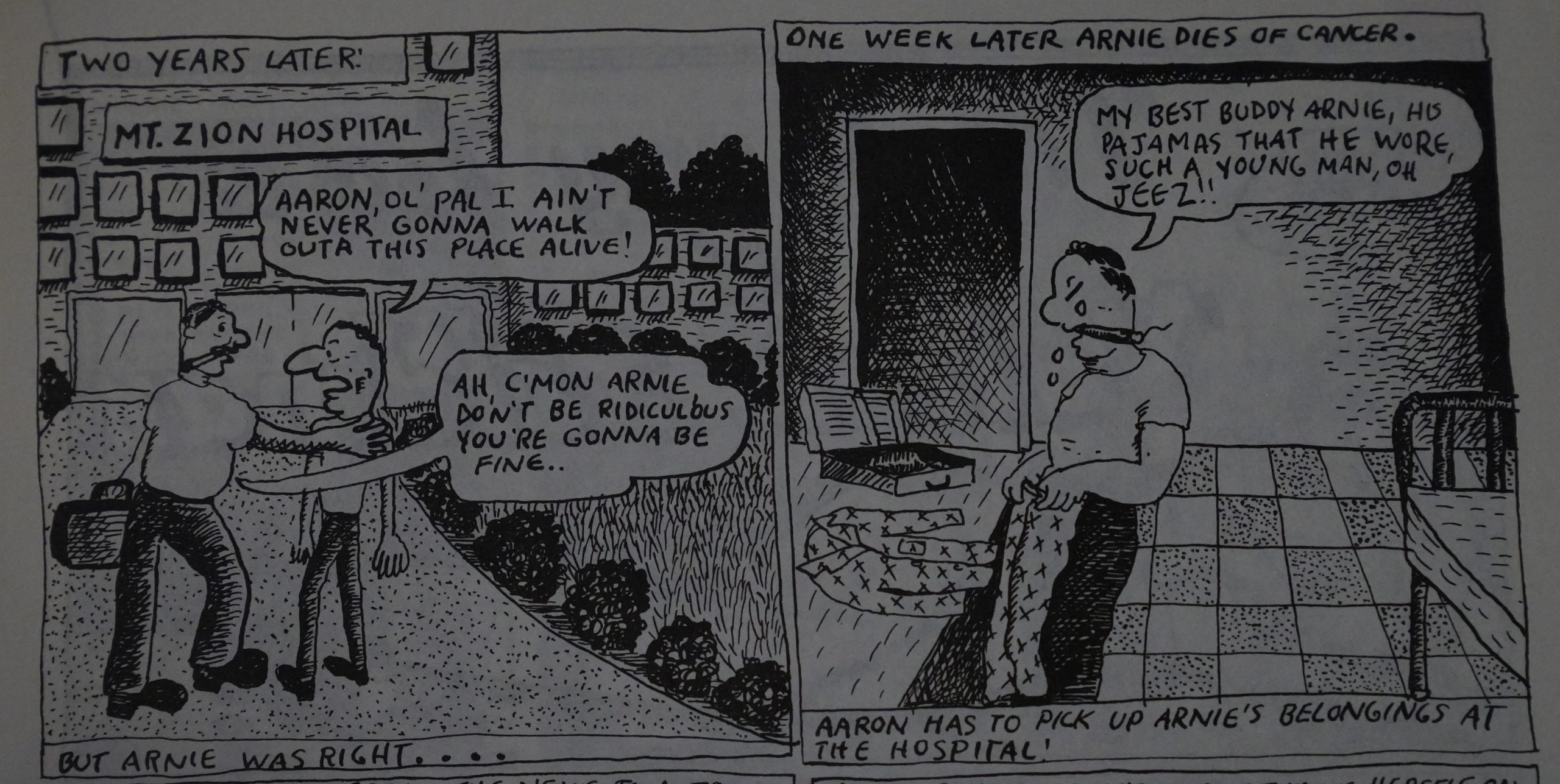 And it’s very abrupt — here’s how her father dies, over two panels.

In any case, I thought this was the best comic book I had ever read in my entire (not very long at that point) life. The artwork’s a mixture of sloppy (some of the figures) and absolutely obsessive (the hatching, the stippling — filling most of the open space). It’s gorgeous and disturbing at the same time. 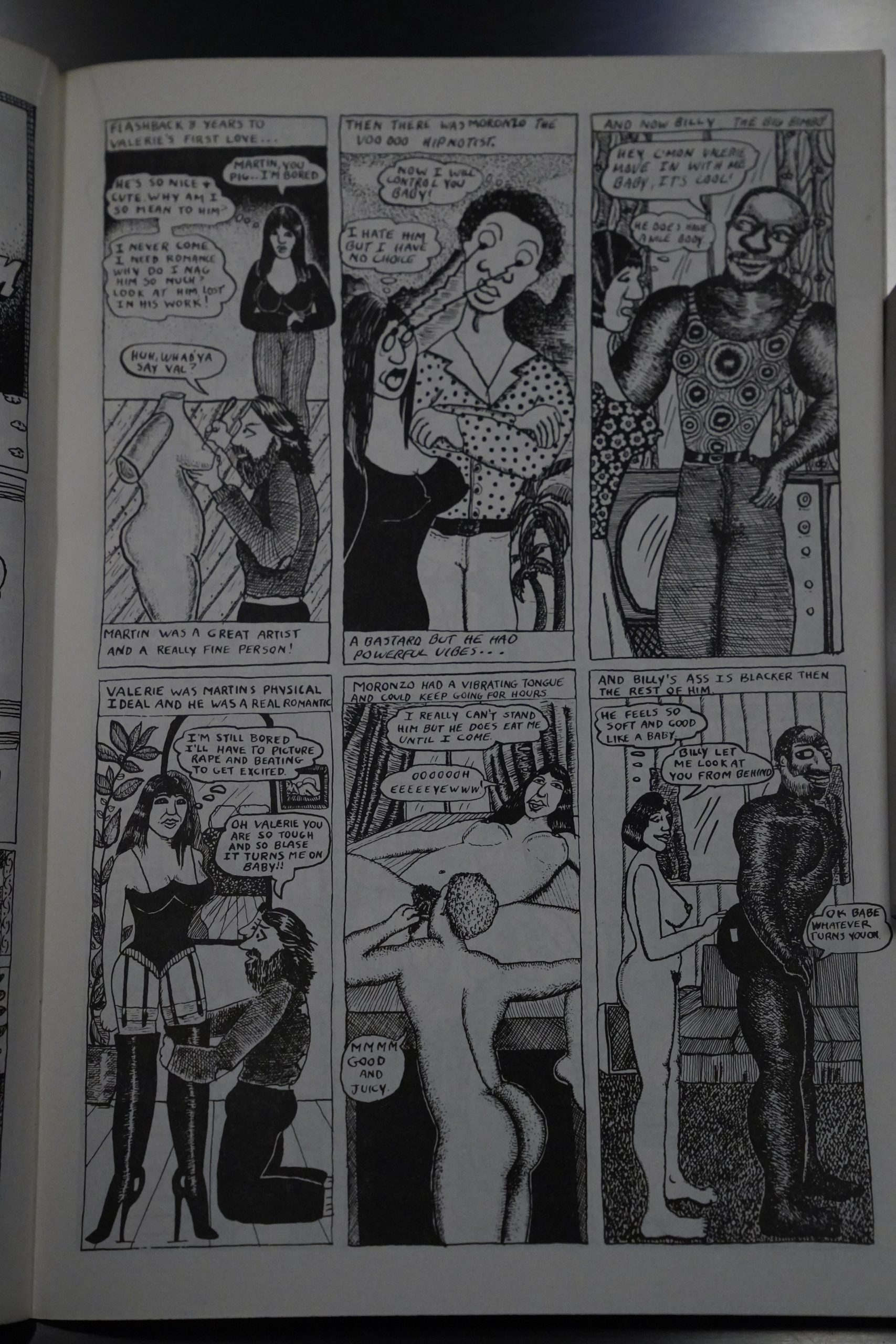 I think at the time this was published, it was kinda beyond anything? That is, Kominsky didn’t really have any peers in what she was doing, exactly. But it didn’t take many years before you could see people picking up on what she was doing, and using her approaches both to storytelling and sometimes rendering, but less often. 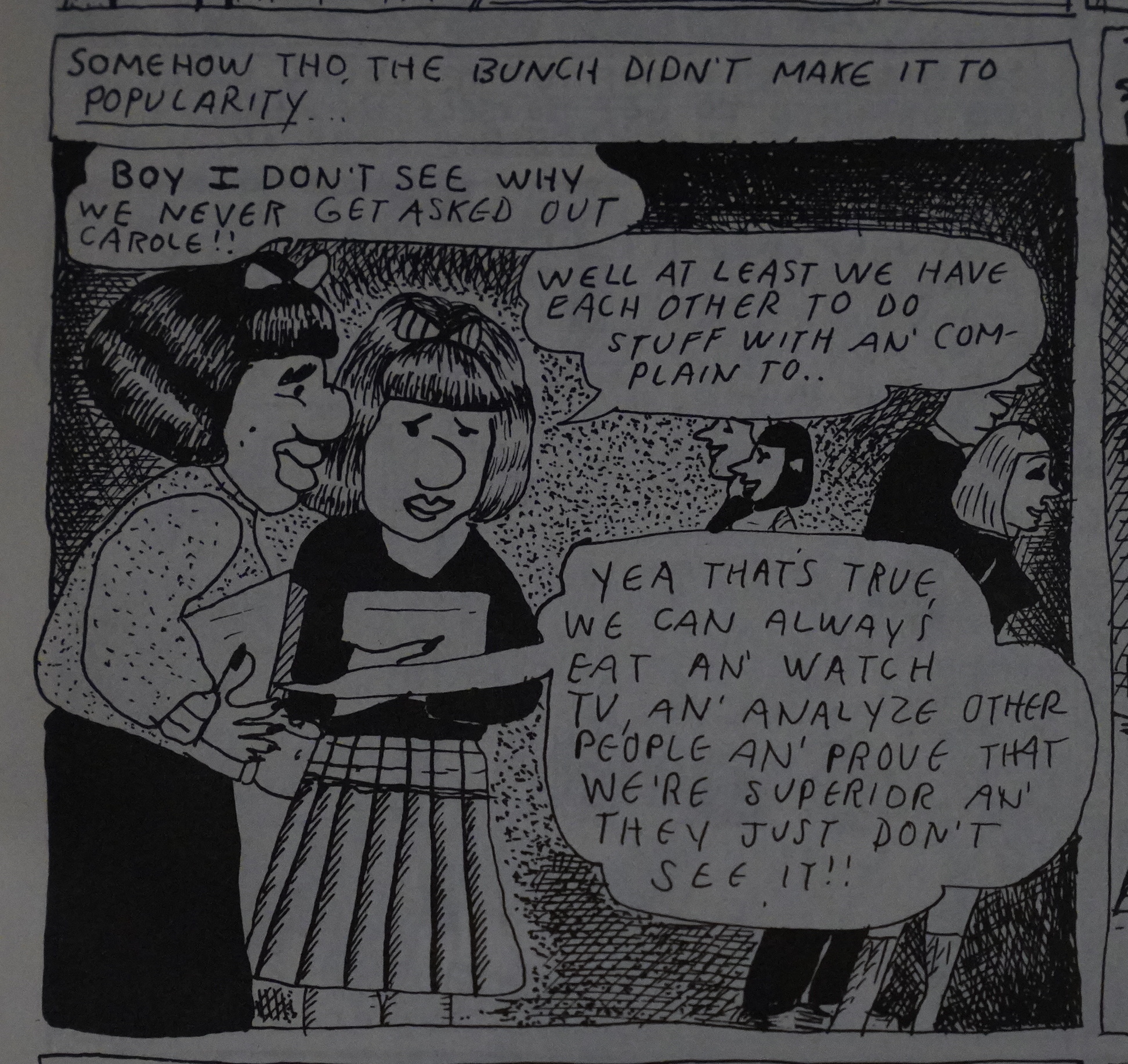 What I’m saying is, this really spoke to me as a thirteen year old, and it still does.

The first issue was done between 1976 and 1979 (when it was published), and the second issue was published two years later, with only newer stuff (I think). And I think you can tell that she’s thinking a lot more about how her work is and will be perceived. Much of the issue is her explaining herself to the reader — like in the opener Why The Bunch Can’t Draw. 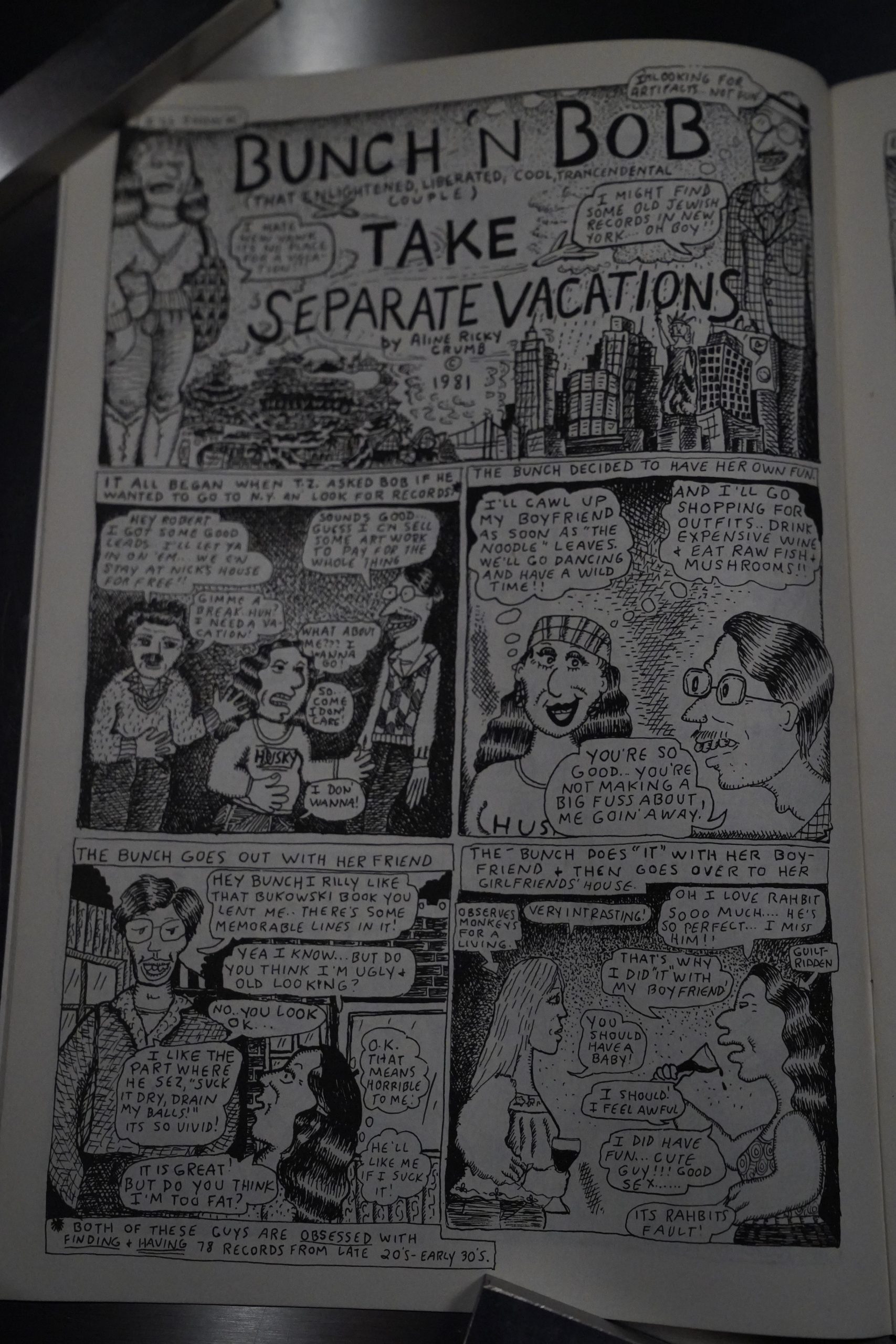 There’s also no depictions of herself on the toilet, and no drawings of anybody fucking. The closest we get to anything scandalous is this page where she goes off with her boyfriend while her husband is away. 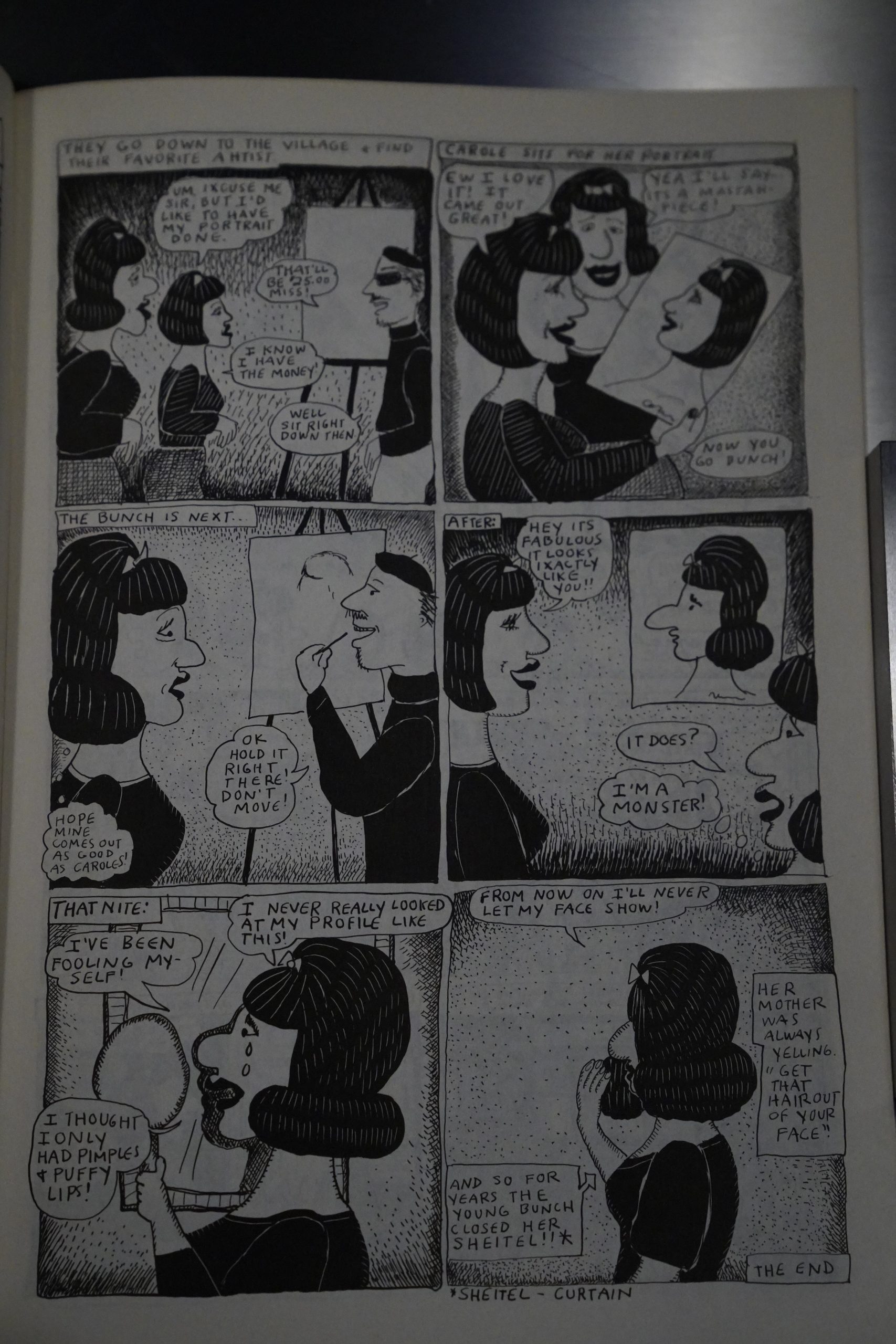 Heh heh. I don’t think anybody’s ruined as many lives as sidewalk caricaturists — destroying kids’ faith in themselves for decades. 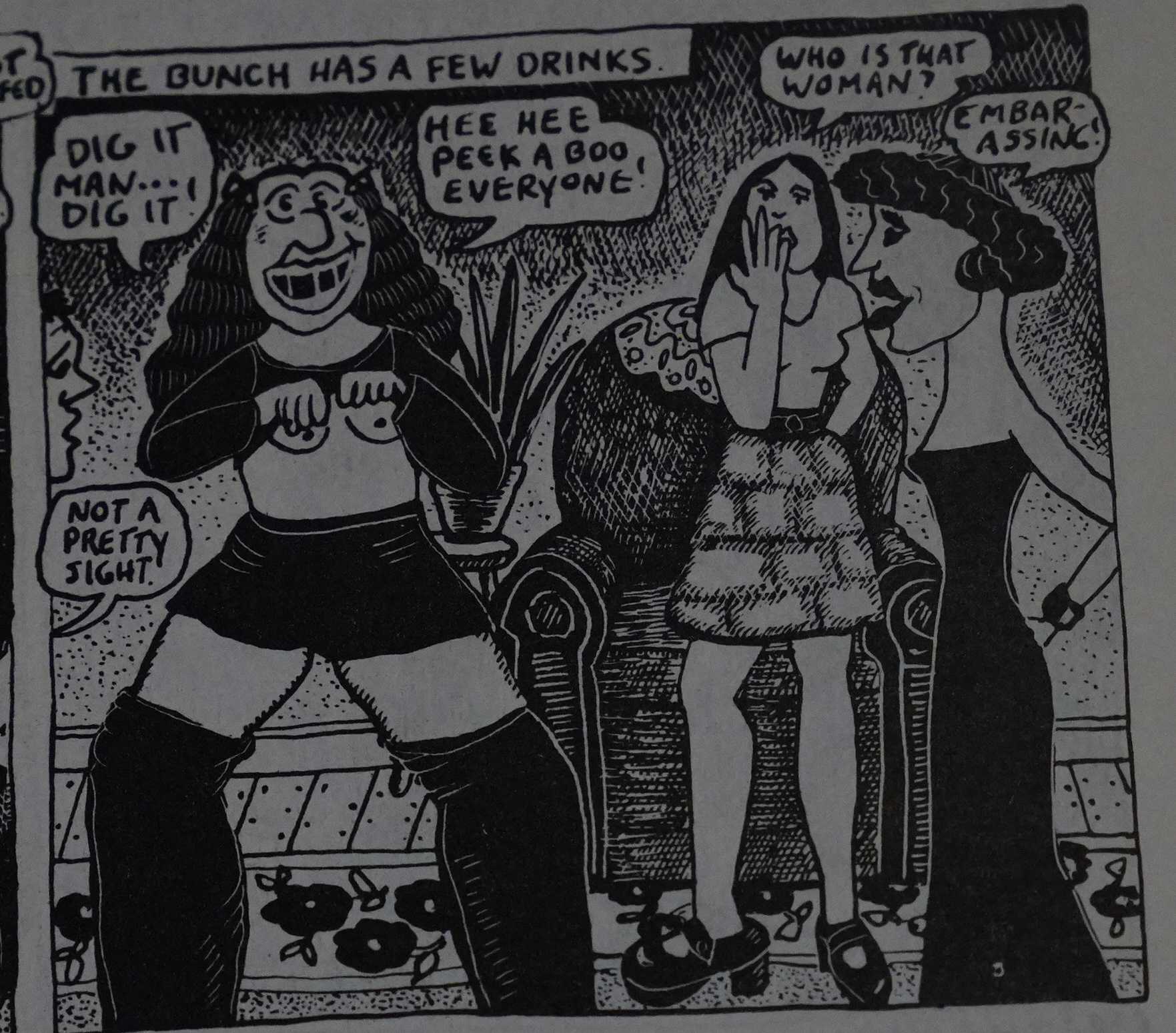 Oh, wow. Classic. I think I’ve seen a lot of variations on this panel? Or is this a reference to an older comic? Hm. 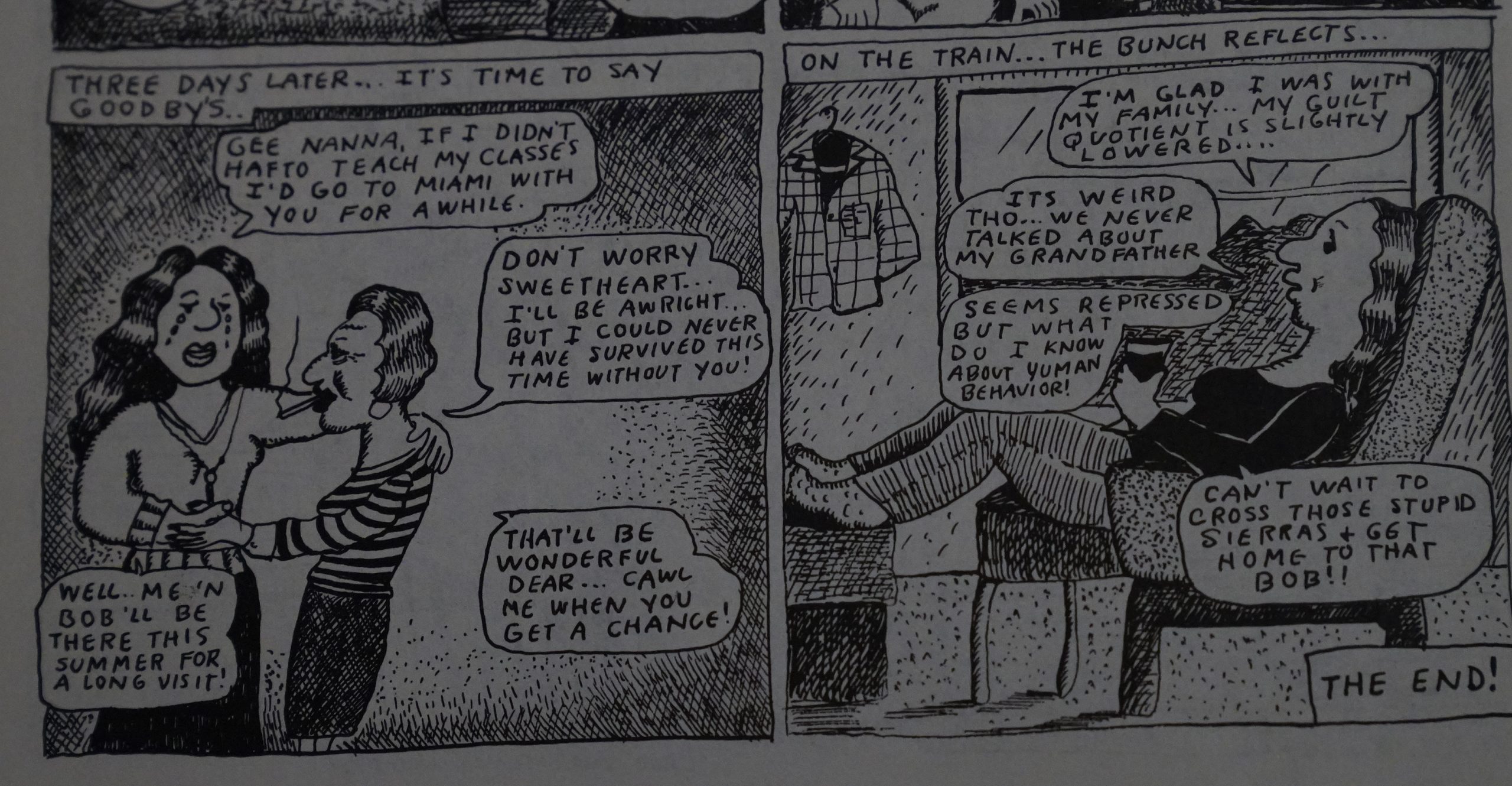 Misunderstand me correctly — I’m not saying that the second issue isn’t good or anything, but it’s very different from the first issue. I loved them both back then, and I still do, but it’s the first issue that’s seared into my brain.

Kominsky would go on to do a lot of comics over the years, but mostly in anthologies.

Peter Bagge interviews her in The Comics Journal #139, page 64:

[…]
Two years later Arnie dies
of cancer; the children have grown
old enough to escape and Blabette is
a successful career woman. “All I
have is myself.” she says at story’s
end.
The line is clearly ironic. Neither
Blabette nor Arnie, Kominsky makes
clear. have ever looked far enough
beyond themselves to have anyone
else. Their children are little more
than devices to further their
parents’ self-esteem—or, worse yet ,
further their business ventures .
Arnie, selling encyclopedias to
ghetto blacks , pays the Bunch for
every she can get on her report
card, just so he can use the card as
a testimonial for the books he’s sell—
ing. Both parents spend more time
arguing about their son than they
do trying to cope with him. As a
result, parents and kids all remaim
self—oriented and alienated from
each other. When mother and chil-
dren go to Miami to forget Arnie’s
death, Kominsky draws them facing
the reader, locked in their own
thoughts and unable to communicate
them to each Other.
Aline depicts this all with a critical
eye, sometimes commenting directly
even when she doesn’t need to (e.g. ,
a panel showing the Bunch receiving
money for her report card is accom—
panied by a narrative tag labeling
the moment her “first training in
capitalist greed and opportunism”) .
The approach creates a tension
between Kominsky’s need to grow
Out of those elements Of her up—
bringing that are offensive to her
and the self—obsession implicit in her
continuing autobiographical drive.
After reading Power Pak’s 17-pager
or the five-page “Birth of Mr.
Bunch” (where Kominsky objectifies
her materialist upbringing as a
chomping male alter ego) , you also
can’t help but wonder what the real
Blabette thinks of the Bunch’s work.
She probably doesn’t read it.

The second issue of The Bunch’s Power-
Pak Comics is the “special California
issue: wine cheese & self-hatred!” as the
cover blurb puts it. The Bunch’s Power-Pak
Comics is the comix book that asks the
question, can a neurotic, aimless Jewish
“collidge” girl from “New Yawk” find hap.
piness married to Robert Crumb and dedi-
cated to a career of drawing comix in
California? More accurately, it’s a doggedly
self-critical exercise in the purgative power
of comix-autobiography. Aline Kominsky
Crumb knows exactly what she’s doing,
and she tells us she knows: “I’m like Woody
exclaims the Bunch in a panel
Allen…”
with a lead-in caption that reads, “She
forces her personal neurosis on you…
readers.” can’t get along with my
mother,” the Bunch adds, then, feel bed-
der tho after expressing it in my story!” All
Of which is’ followed by the unassuming,
lonely caption line at the bottom of the
panel which plaintively asks, “Is this Aht??”
Well, it may Or may not be “aht,” but a
lot of the material, which even the writer-
artist herself characterizes as “a bit grim,” is
diverting. The eight pieces include vignet-
tes of the Bunch vacationing with girl-
friends in Los Angeles, coming to grips
with her fear of flying, and returning to
Long Island (‘i Where life is cheap and death
is expensive!!’ for her grandfather’s funer-
al. Several of the stories trace the Bunch’s
life as a teenager living through just about
every conceivable adolescent misery.
There’s an almost terrifying preoccupation
with the banality of middle»class existence,
and the Bunch’s ceaseless self-criticism is
not always redeemed from its painful
aspects by the book’s caricatural humor.
For example, KominskyCrumb intro-
duces the story of the grandfather’s funeral
thus: “The Bunch landed safely and arrived•at
Babette’s house where the relatives were alter-
nating between hysteria and valium-induced
stupor…Even to the Bunch—who obviously
has no sense of decene—this scene appears to
be too grim for comic material. Nevertheless..
and ahead she plunges full-throttle.

This is the fiftieth post in the Entire Kitchen Sink blog series.