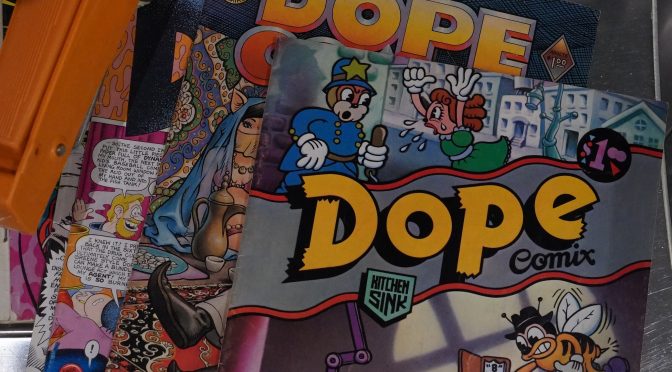 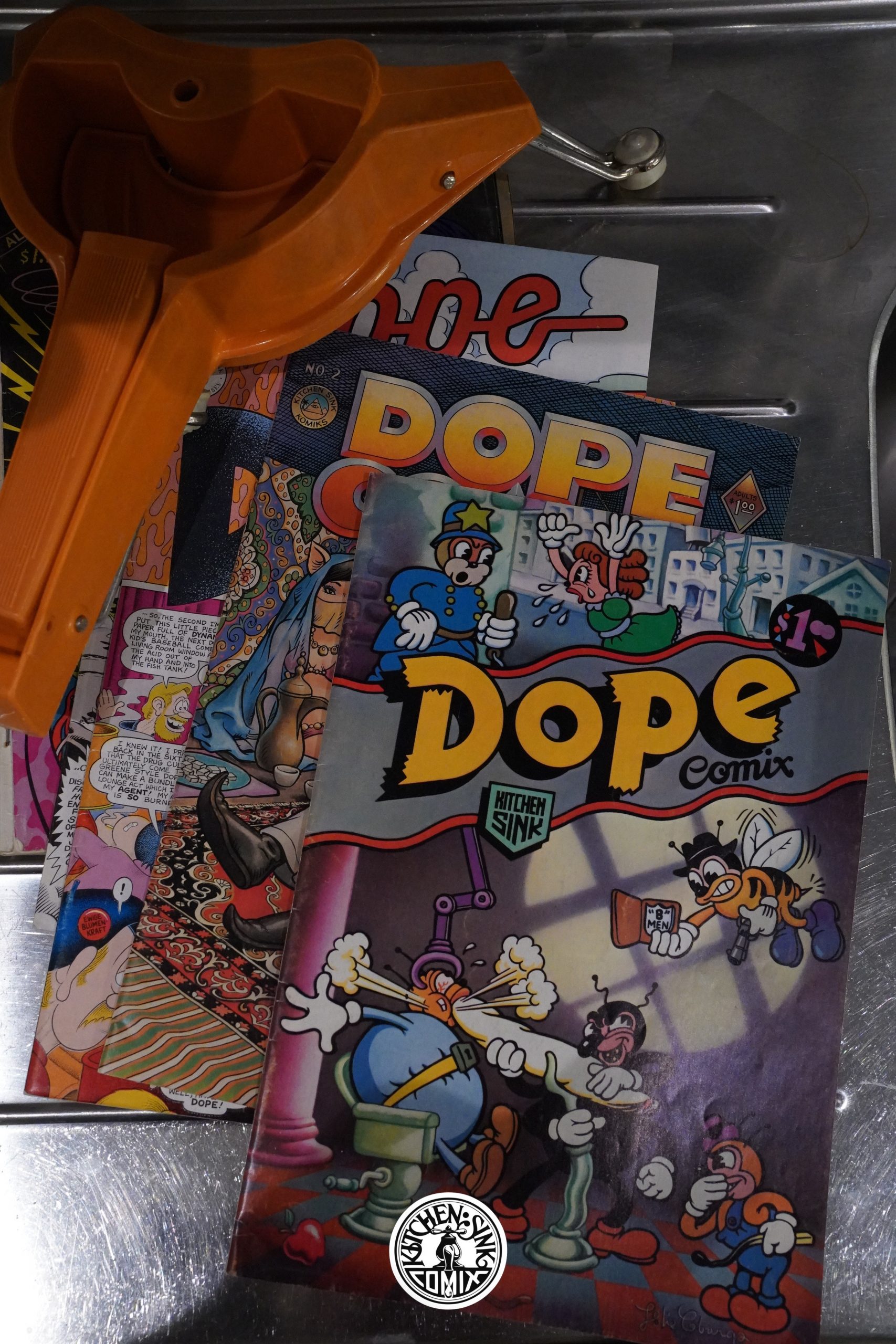 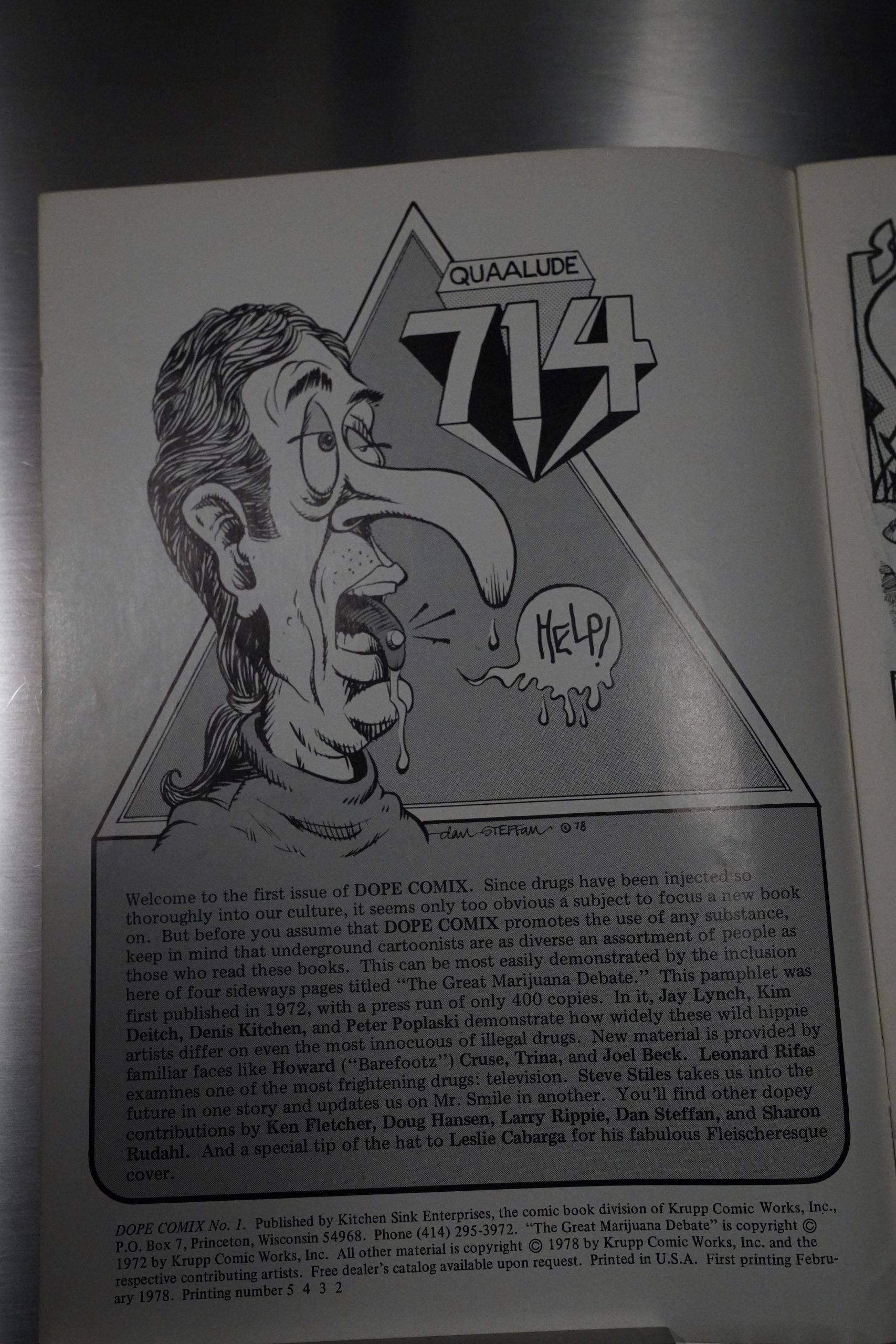 I expected this series to be all about fantastic trips and stuff, but it looks like Kitchen is trying to have plausible deniability here (in case there’s a crack-down on drug crazed comics or something)? So we’ll be getting both pro and con comics. 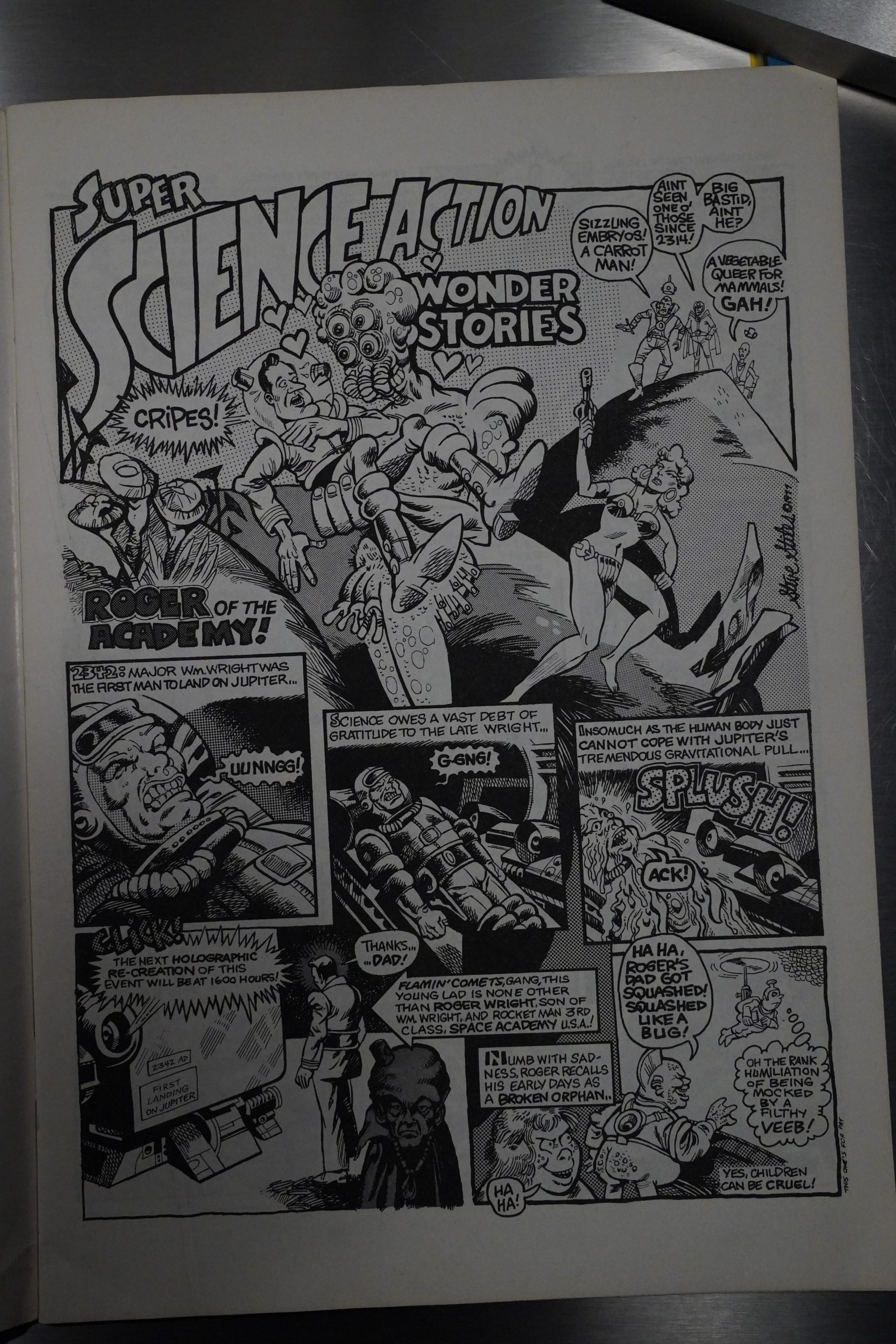 Or perhaps… just randomness. Steve Stiles starts this all off with a sci fi thing that doesn’t seem to have much to do with drugs at all. 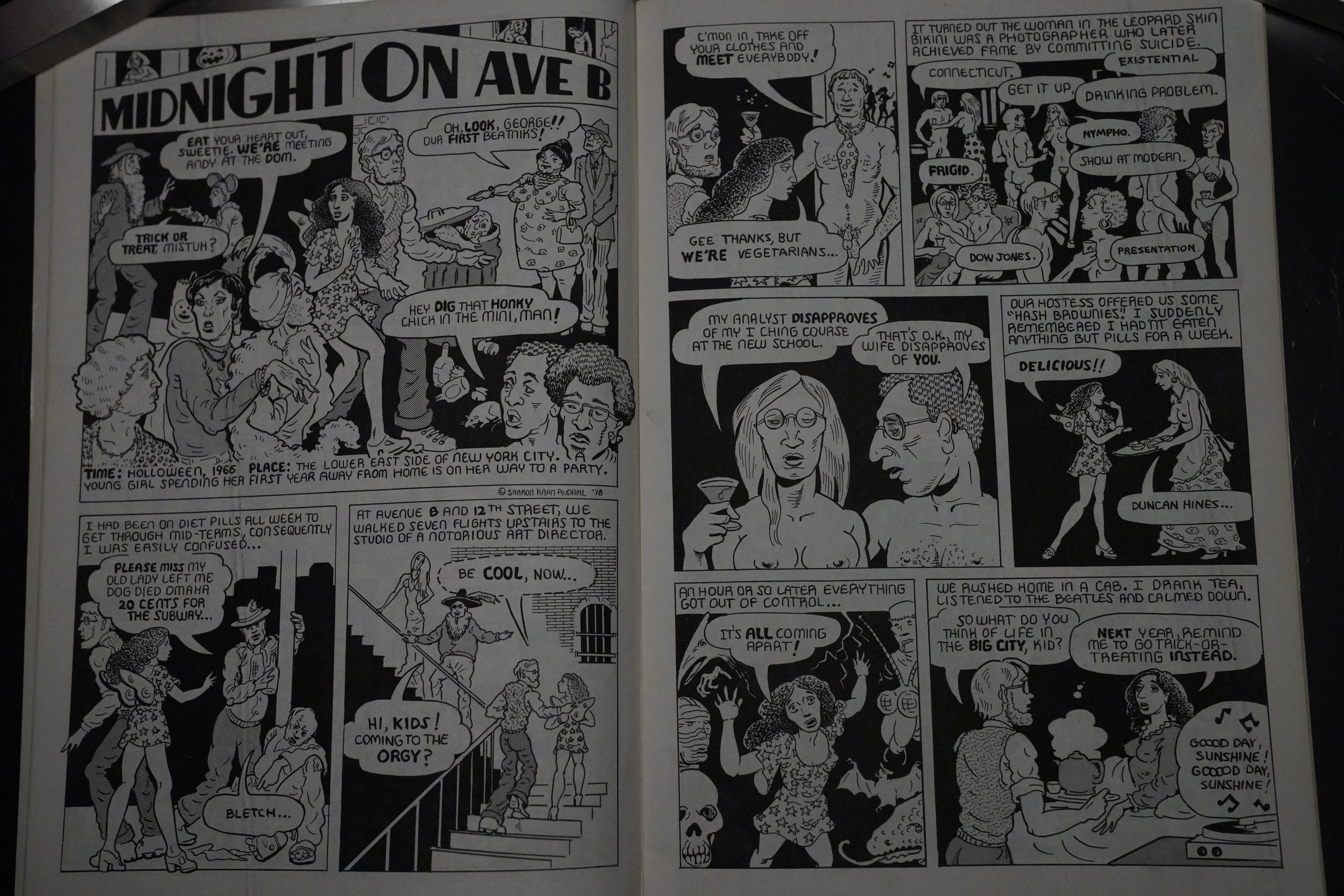 Sharon Rudahl does a two-pager about a nifty party. 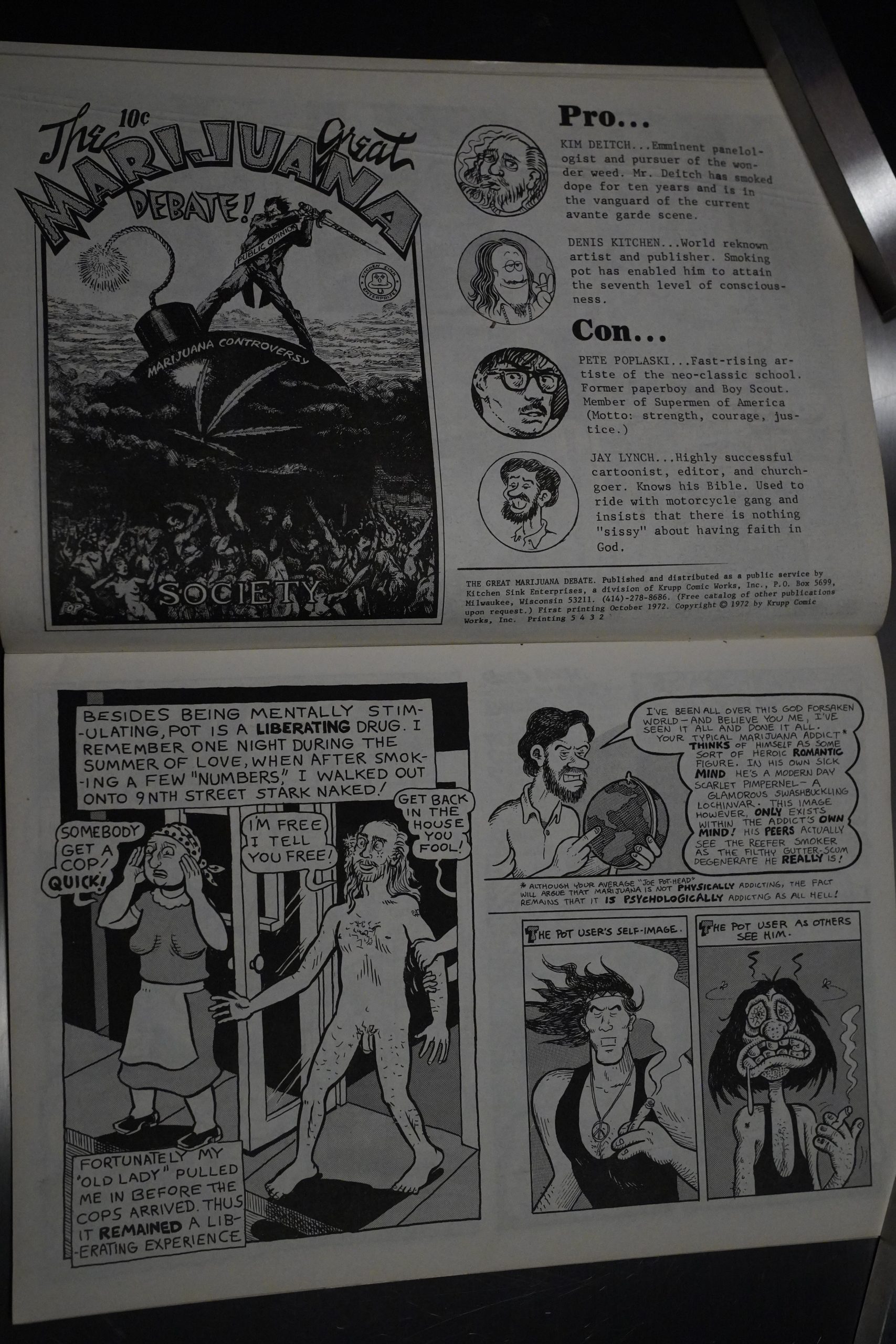 Ah, and then we get a reprint (apparently in full) of the Great Marijuana Debate pamphlet. 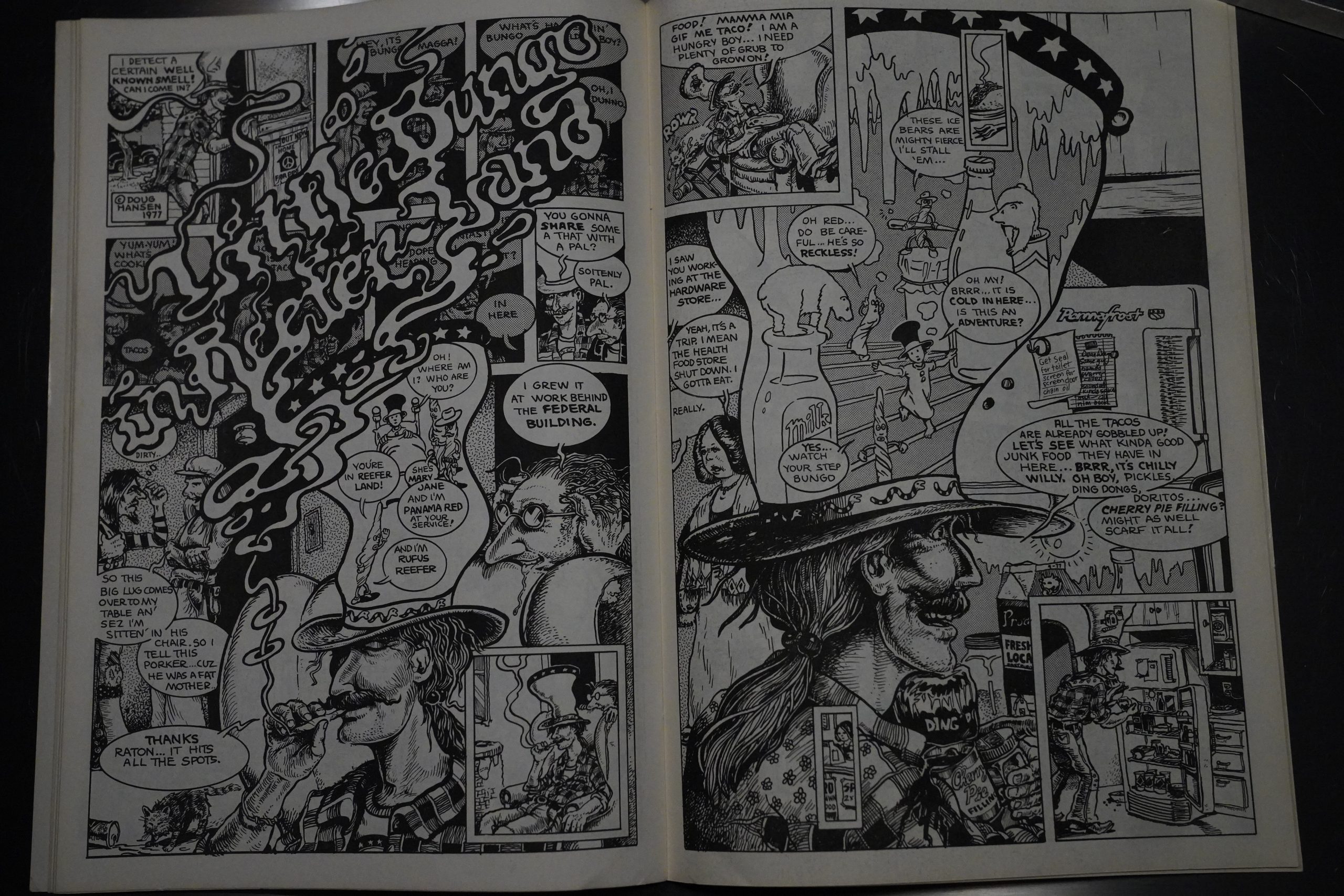 OK, this is more like I was expecting. Doug Hansen does a very drugged-out six pager. And now I realise why Kitchen didn’t fill the entire issue with stuff like this. 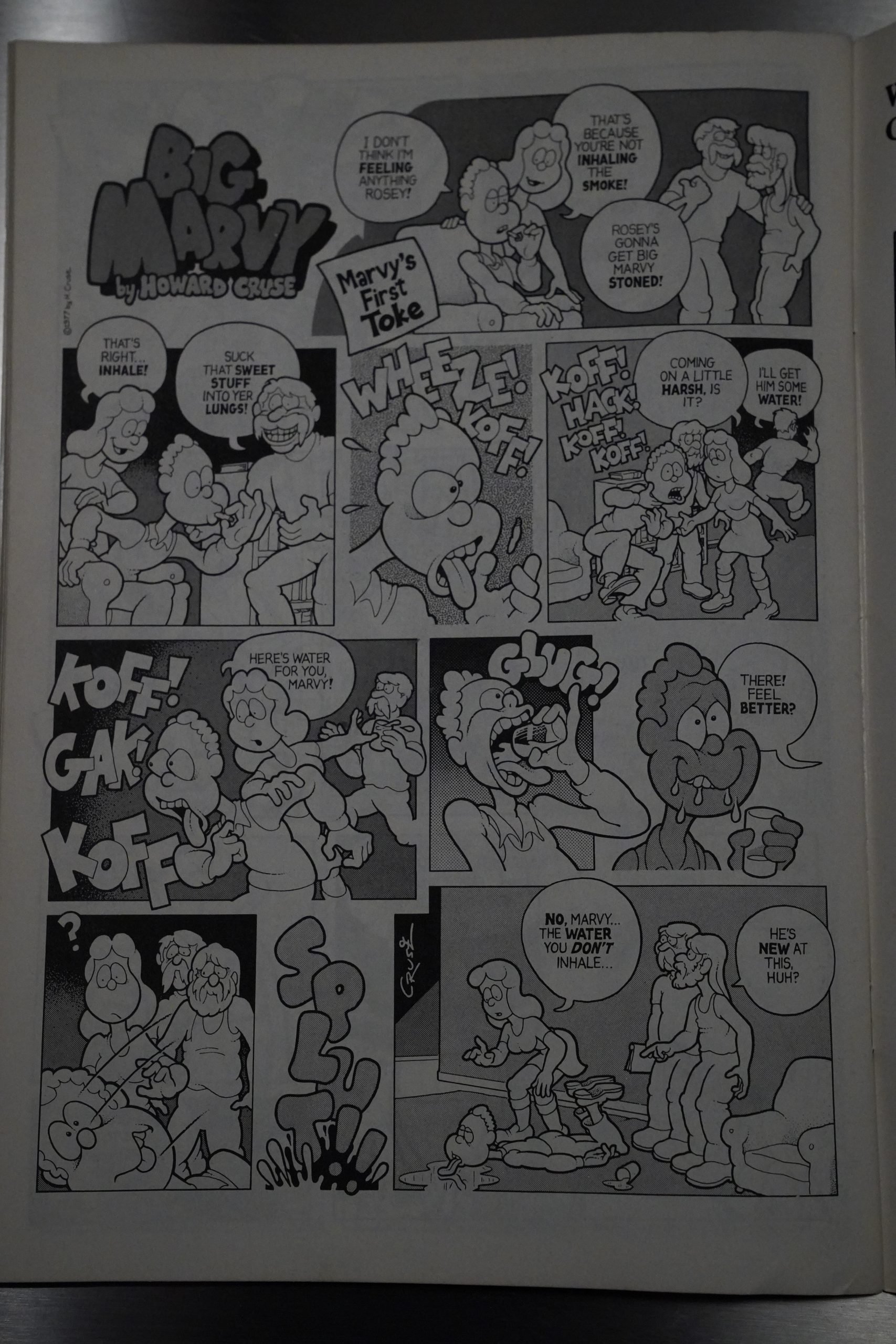 Howard Cruse does a helpful story about how to drink water properly.

So while the first issue wasn’t at all what I was expecting, it’s a pretty successful anthology, I think? It’s got a built in thematic unity, of course, but it’s got a pretty good flow. It’s almost all Kitchen regulars, though, so I guess Kitchen just called all his people and asked them to contribute, instead of having a specific set of stories that he wanted to mould an anthology around. 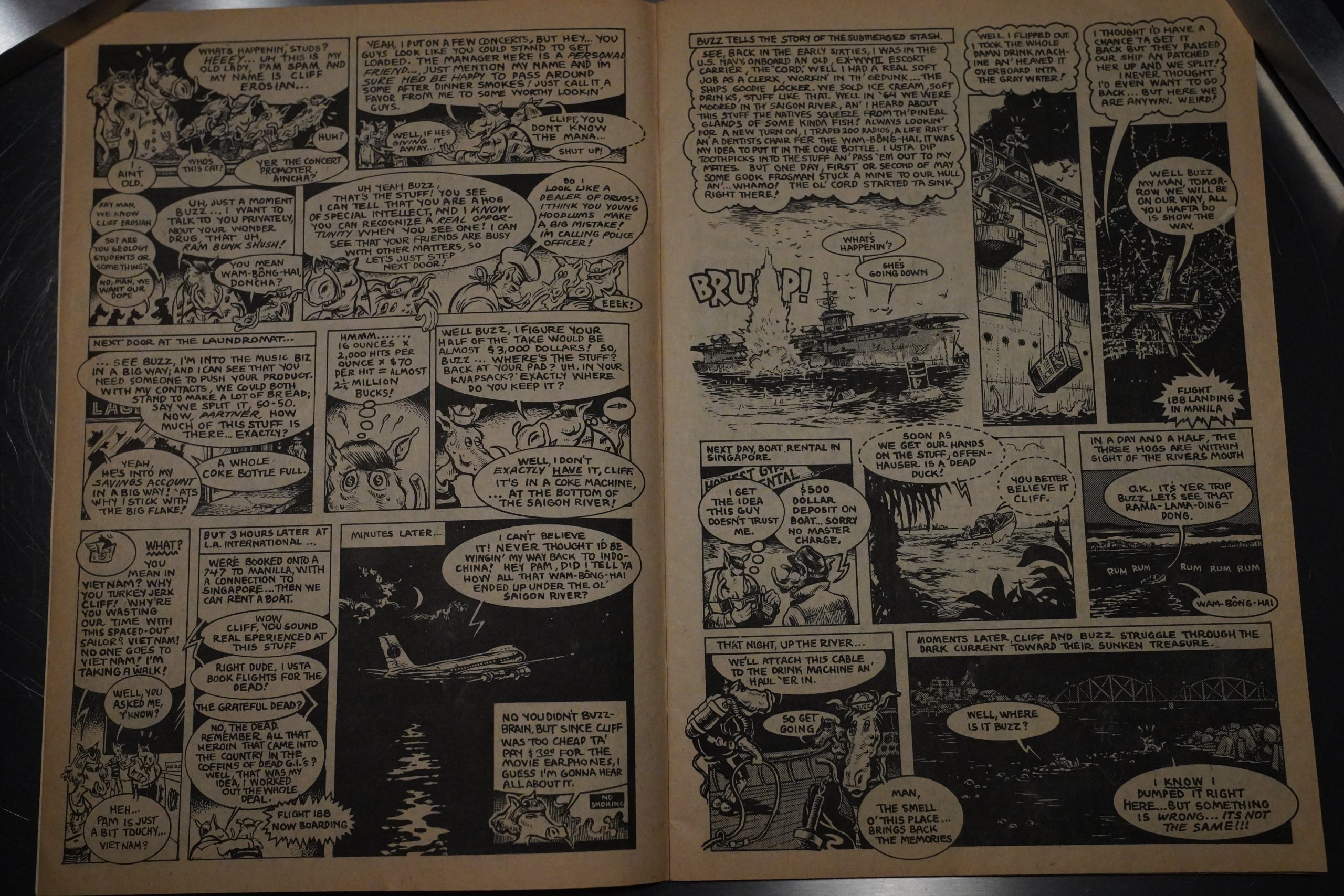 The second and all subsequent issues drop the pro/con thing, basically. Instead we get a lot more drugged out epics (above again by Doug Hansen). It’s not… quite… readable, is it? 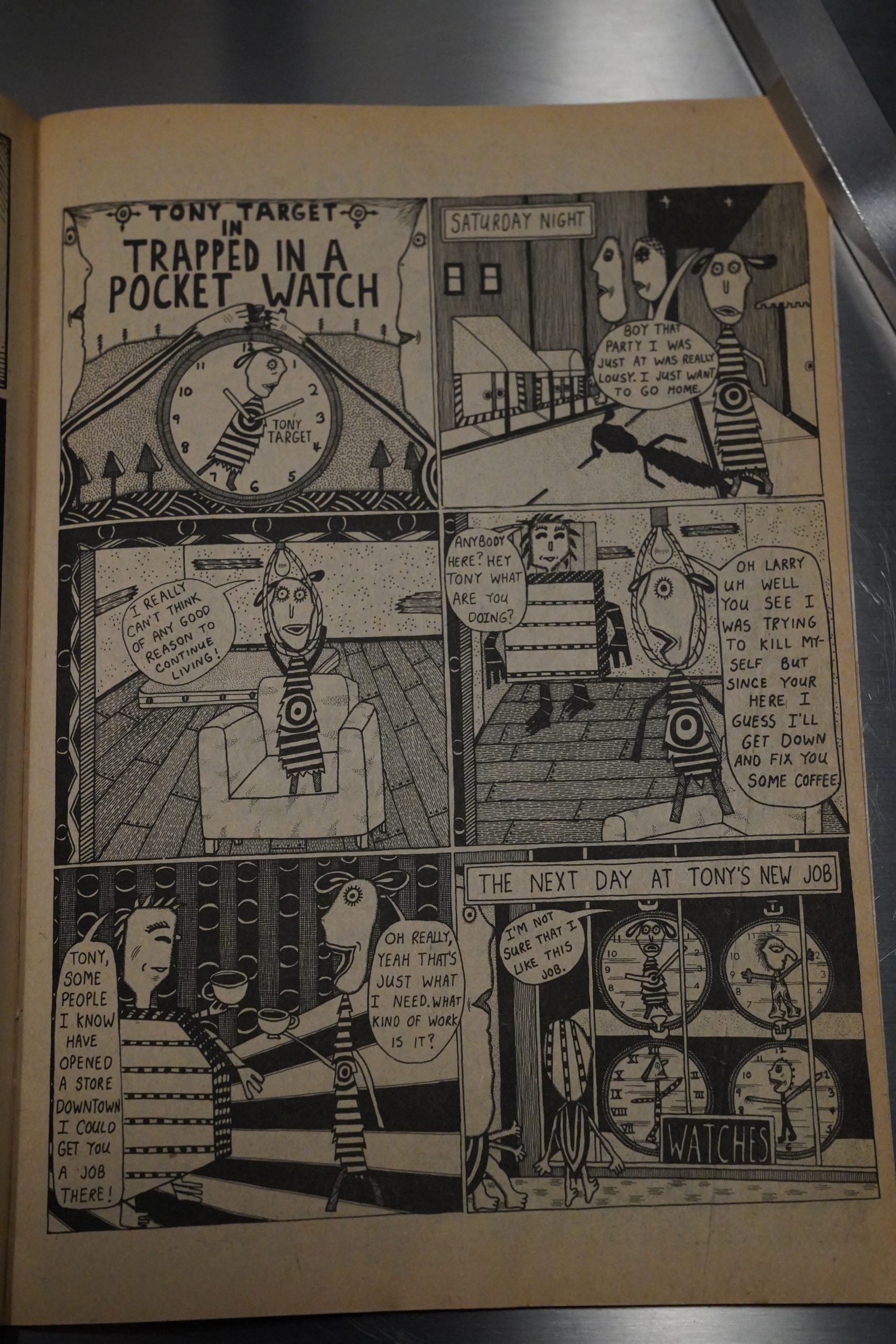 But then! Suddenly! Two pages of Mark Beyer! That have nothing to do with anything, but it’s Mark Beyer, so whatever. (And I think Beyer reprinted this in one of his comics later…) 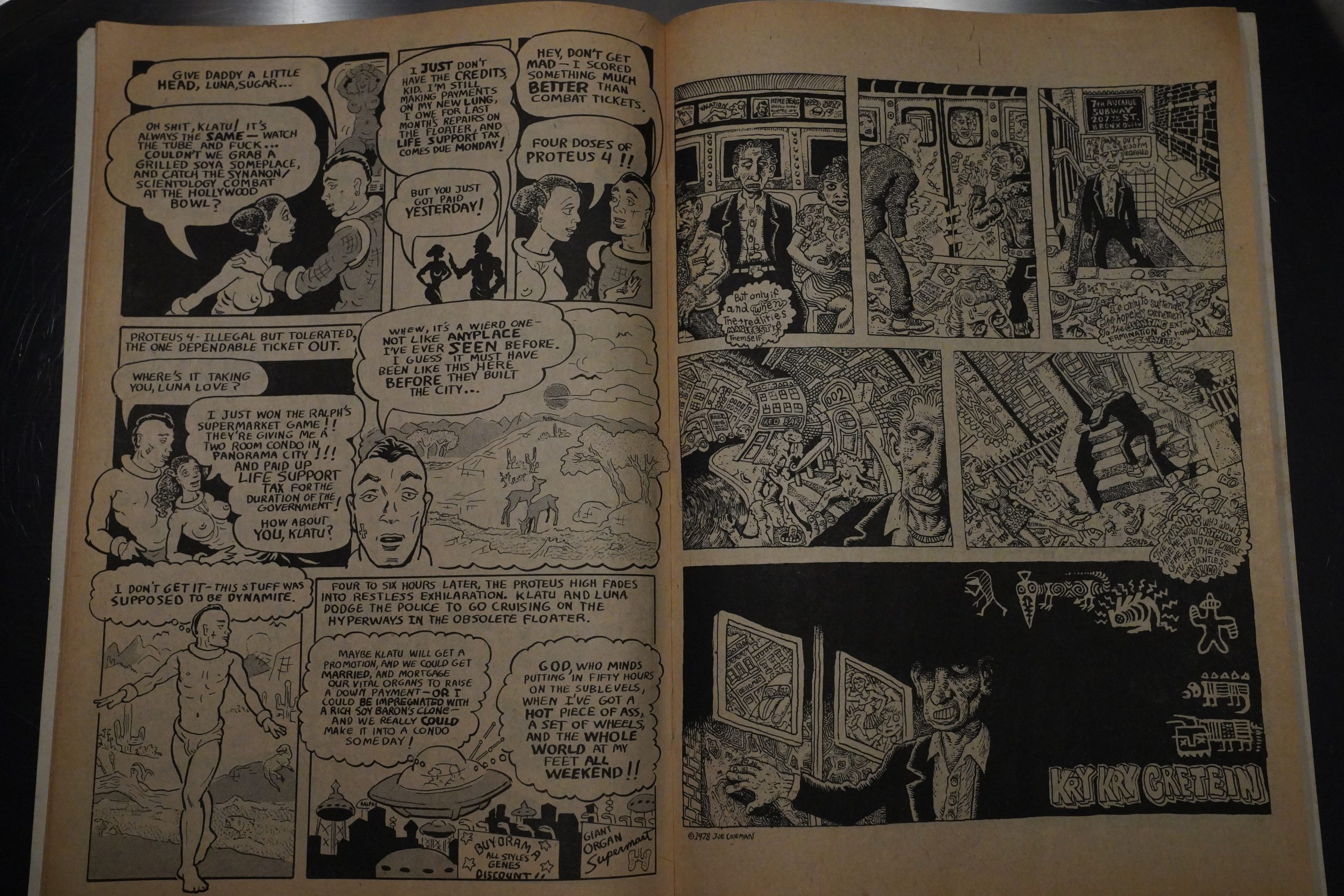 Sharon Rudahl, Joe Coleman… it’s a juxtaposition for sure. 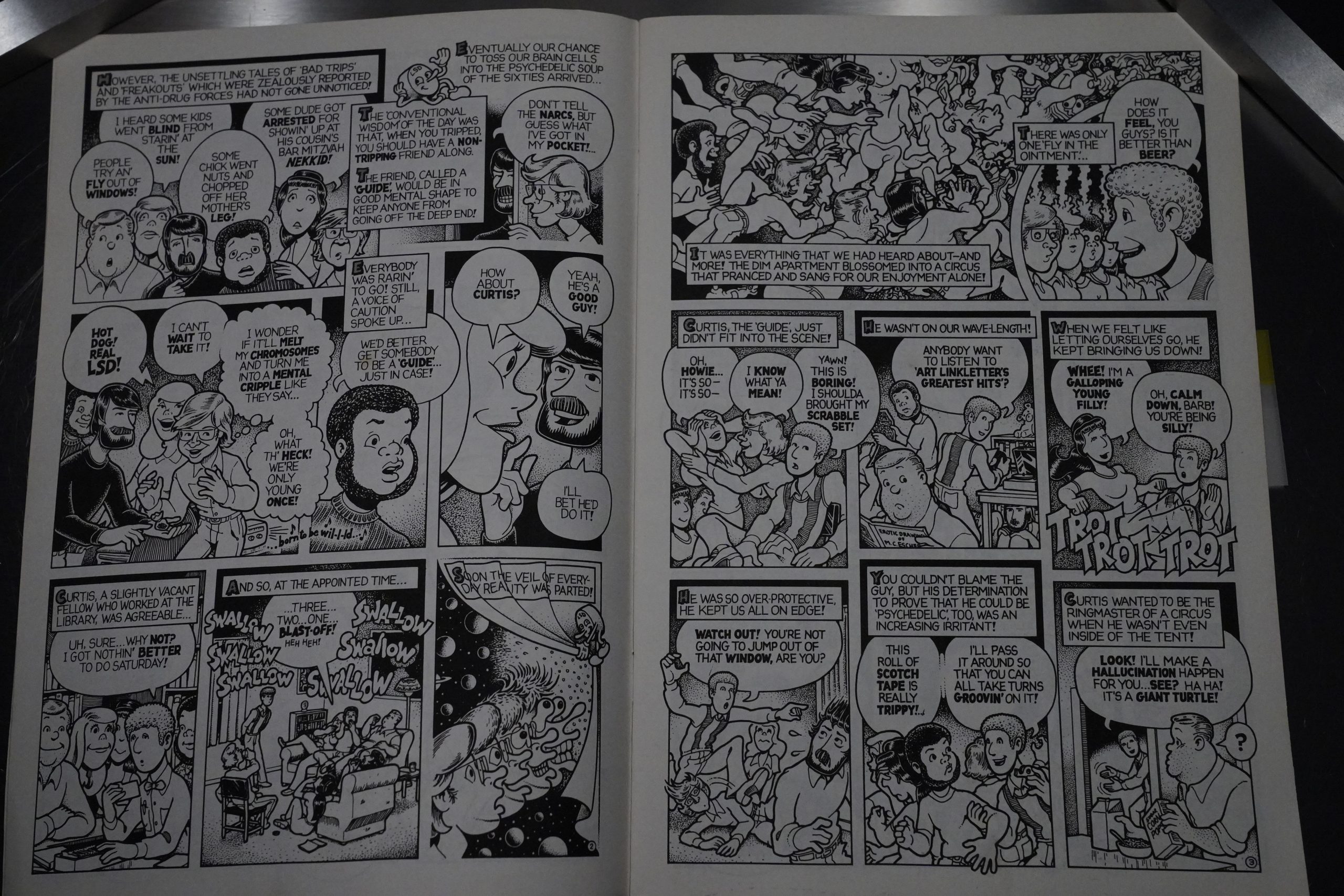 The best thing in the series is this story by Howard Cruse, which has been much anthologised, I think. It starts off so earnestly, and then has a very shocking, fantastic ending. 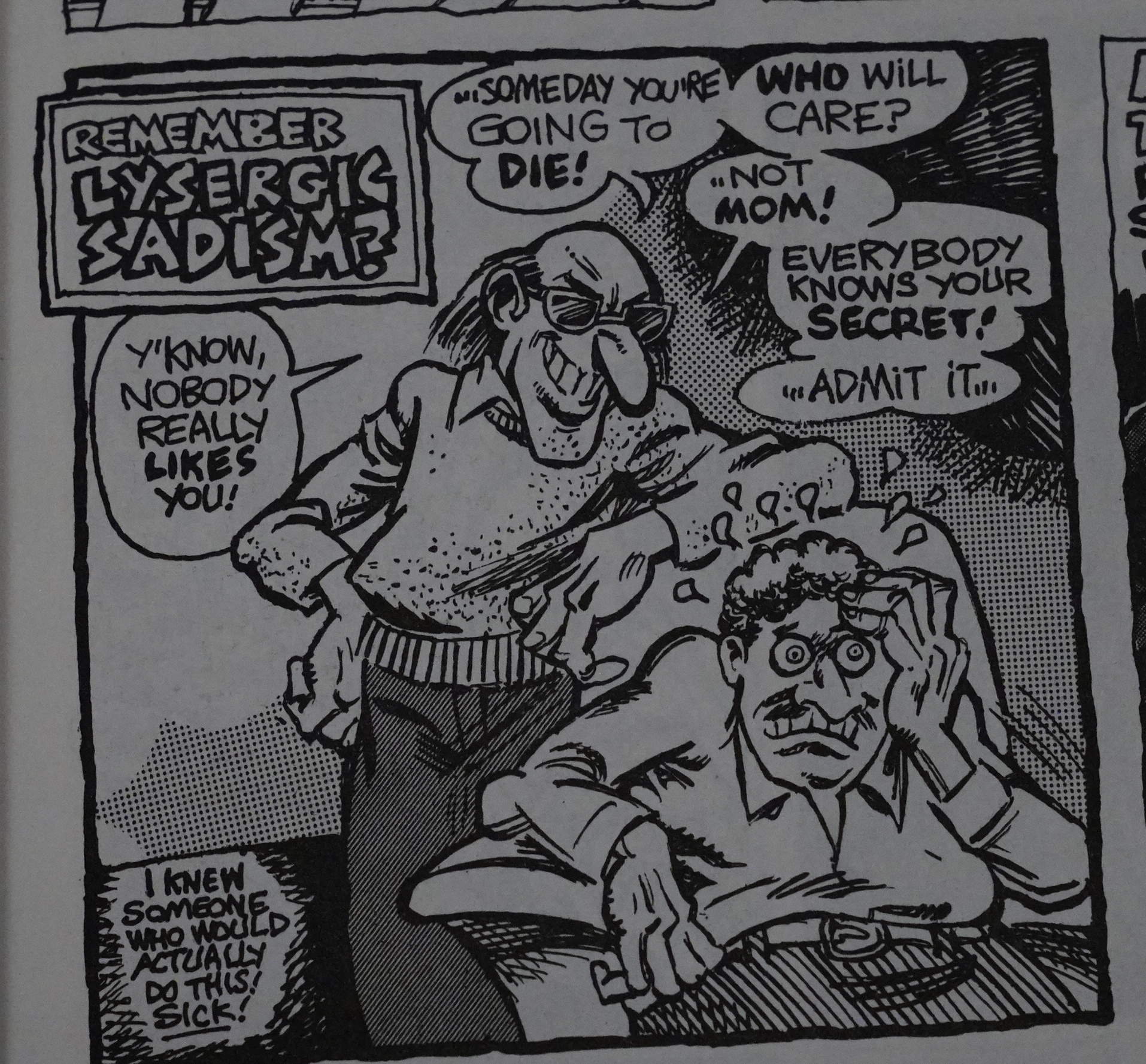 Wow, what an asshole. I think this is Schwind again? Kitchen Sink aren’t very thorough in doing attributions for their anthologies. 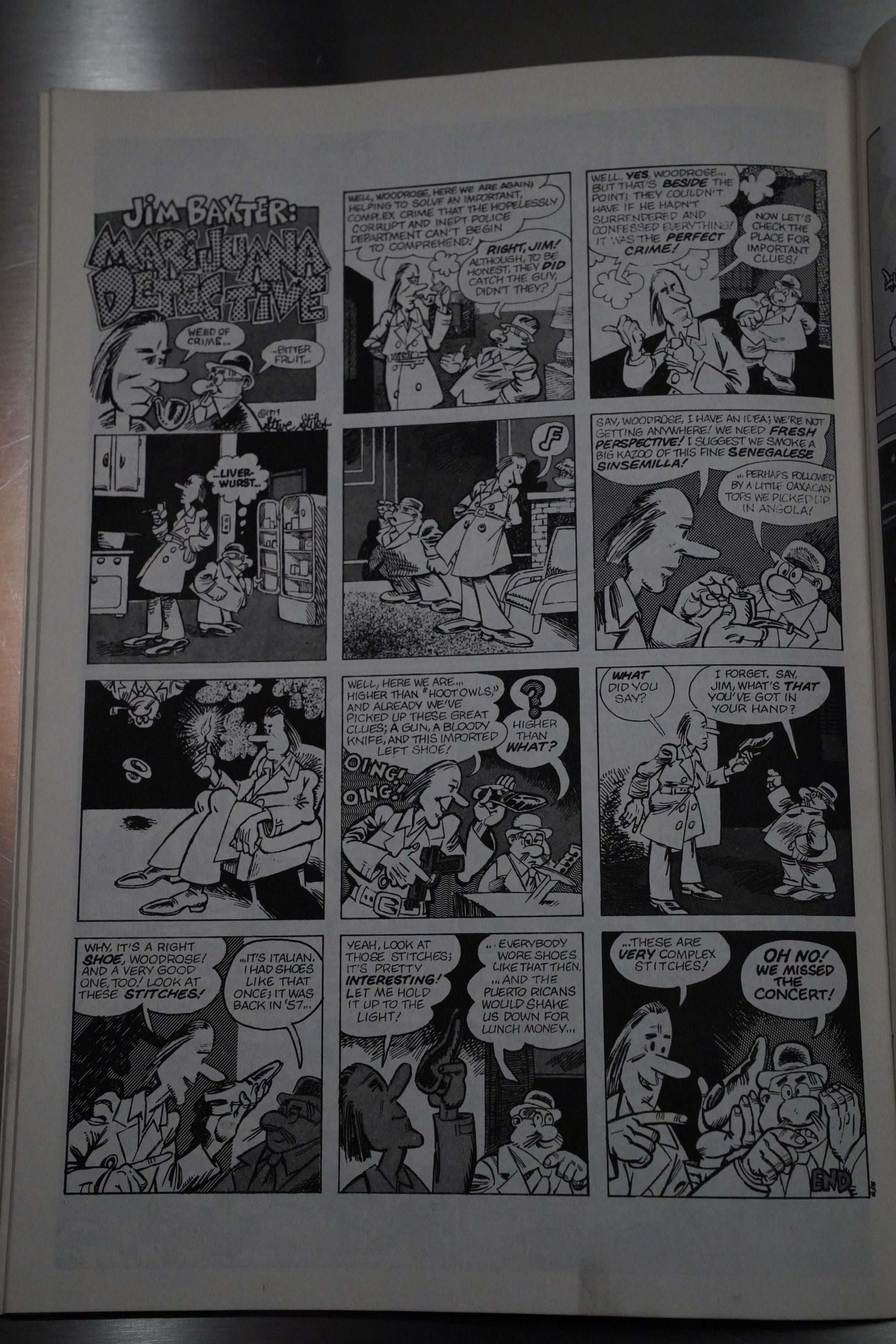 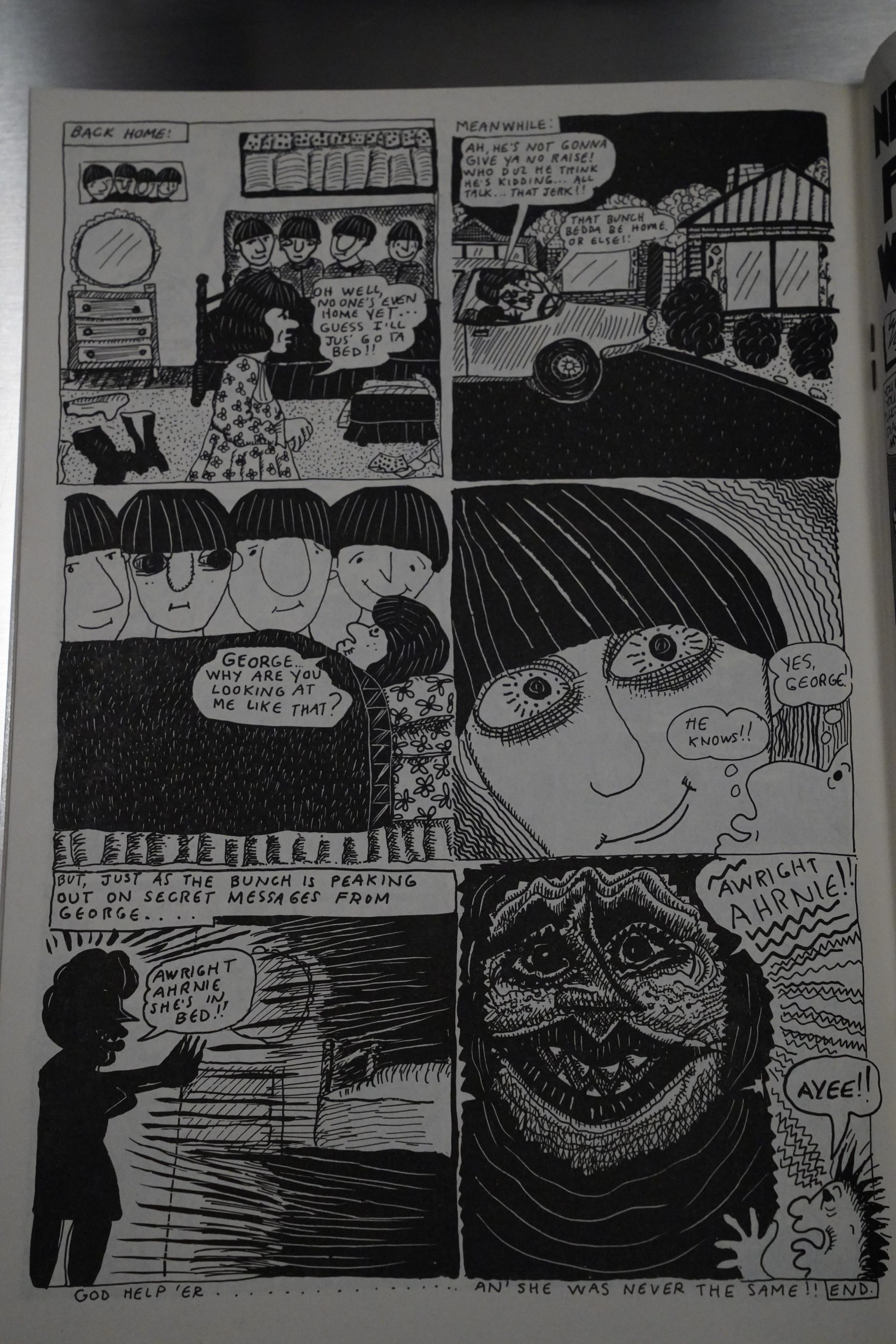 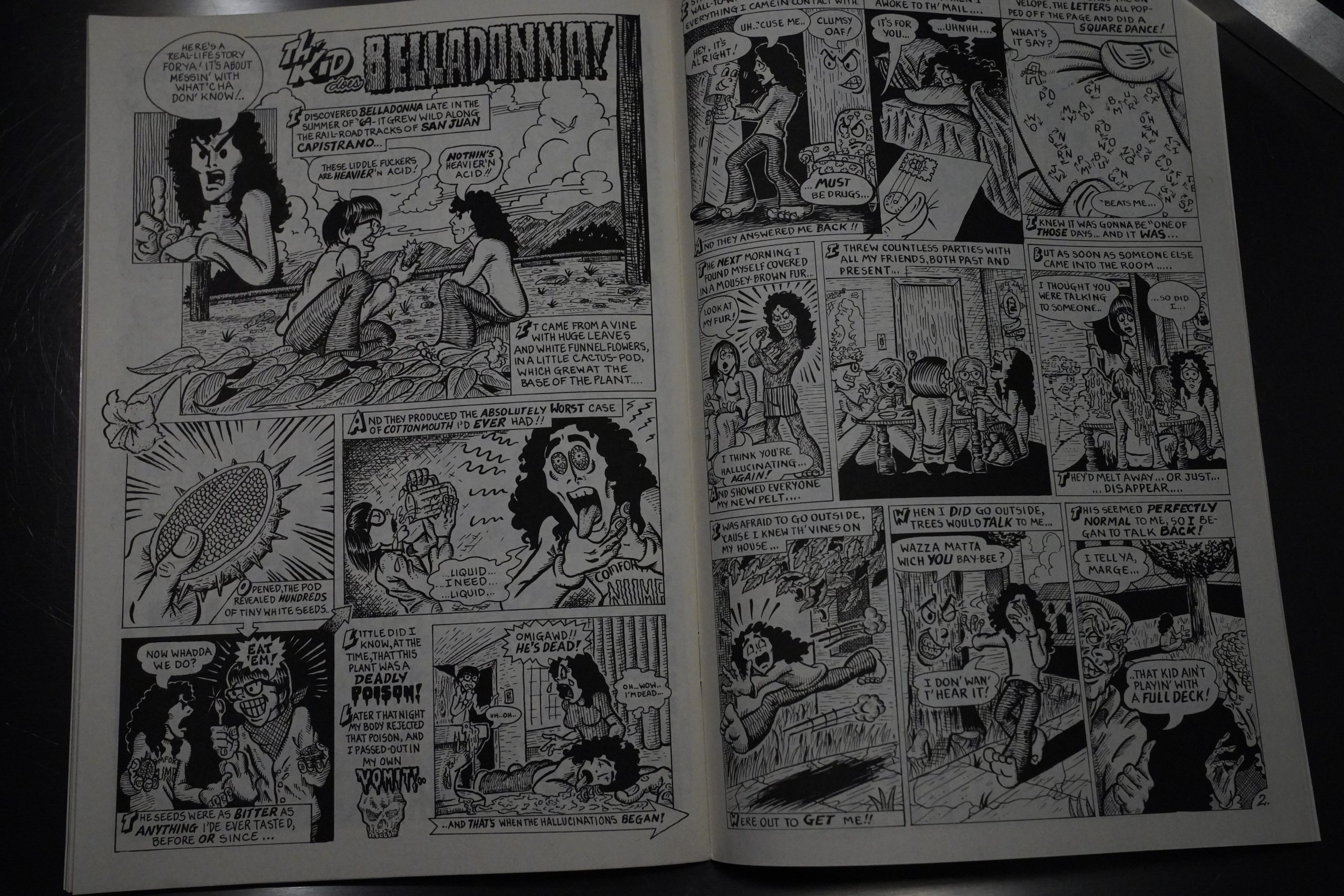 We’re getting into the 80s here, so Jim Valentino shows up.

This “once profitable” series is cancelled with the fifth issue, because… well, I guess time was up. It’s also the least inspired issue in the series, and seems mostly like odds and ends. The person I bought this issue from included this thing — it’s apparently a cutting from some magazine that’s gotten some self adhesive contact paper plastic thingie glued onto it? Looks great! The same image was used on the cover, and it’s by Charles Burns, of course. Thanks, ebay person! One of the notable random things in the final issue was this page by Kaz.

Not very dope, but great.

Like most Kitchen-edited anthologies, Dope Comix seems a bit random and scattered, but it’s pretty good?

Ten years have passed since the first
chemical wave, and that distance seems to
have been reached. Today’s dope comix
are written With a knowledge Of drugs’ risks
as well as their attractions. For some comix
artists, just the sight of the drug era’s
casualties has been sufficient to shift their
perspective; for others, it’s taken a decade
of personal experience and remembrance.
In either case, the days of unabashed feed-
your-head progagandizing are clearly over.
The latest issue of Dope Comix (Krupp)
presents this shift most clearly. Dows
premiere was primarily a pothead’s book,
fairly innocuous with little to challenge the
Confirmed user’s preconceptions. (Even a
reprinted comix pamphlet, “The Great
Marijuana Debate, ” was done so broadly it
could barely be taken seriously.) Yet issue
is grimmer fare, full of druggee tribula-
tions that are convincingly recreated.
Dope may be fun, the book’s artists appear
to be saying, but some kinds of fun have
their risks.

Dope*s other contributors work their
material a little less ponderously, but their
tales still maintain a cautionary tone. Aline
Kominsky’s Bunch, for instance, first drops
acid gn a lark and winds up at home fright-
ened by a gargoyle drug vision of her
mother; Steve Stiles’s persona gets slipped
some hallucinogens by a skuzzy drug dealer
and has to cope with New York City rush
hour traffic; Dan Steffan undergoes the
familiar sensation of being hopelessly lost
with a tripping cohort. These are survivors’
tales, told by the artists about themselves,
suffused with nostalgia but also with an
awareness that their drug use has affected
them to this day. Though a varying
amount of exaggeration is used for comic
effect (Stiles on his rendering of a heavy
acid flash: “Recreation of actual ‘sock-it-to-
me’ delic experience. If yours wasn’t like
this, you are probably an, inadequate
human being.”), a low-key didacticism still
comes through. Know the effects of what
you take, the artists say. In these days of
Mickey Mouse tattoos, that message is
probably necessary.

In light of these changes, Kitchen Sink’s
Dope Comix may be the last of the
dinosaurs—a genuine underground that
deals wholly and exclusively with the sub.
ject of drugs. And that might be why the
latest issue (#5), according to publisher
Denis Kitchen, could also be the last. In his
editorial, Kitchen cites as the reason for its
probable demise the three main pro>lems
that have plagued all undergrounds for the
, last few years: “Our old reliable headshop
distribution has withered away. Recrea-
tional drug use is on the wane. This once
profitable series no longer seems viable.”
With that being the case, it’s too bad that
the issue that will likely be Dope’s last hur-
rah is so disappointing; unfortunately, of
• its dozen or so individual pieces, only a few
feature the drug-inspired flavor of the
undergrounds of old, and, with only one
exception, nothing in the latest edition
merits truly high praise (no pun intended).
Dope Comi.y #5 does -contain one out-
standing piece of work, and that’s the front
cover by Charles Burns. Billed by Kitchen
as “an inside look at a pothead,” Burns’s
cover has all the spark of the best under-
ground art and provides the perfect intro-
duction to this “all-marijuana issue,” being
funny, surreal, anda little frightening all at
the same time. Besides being simply a ter-
rific piece of comic art, its depiction of the
marijuana experience is both unique and
genuine (if, perhaps, somewhat
rated—most dopers would love to know
where the guy in the drawing buys his
reefer). The issue couldn’t possibly have a
more apropos lead-off for its chosen theme.
It’s too bad, then, that the rest of the
issue fails to live up to its great opening
shot, but even though what follows is more
up than down in quality, the rest of the
book is still downhill from there on. While
there are almost no total stinkers (only
Sharon Rudahl’s “Endangered Species”
falls into that category,’ a silly, poorly
drawn science fiction story about aging
hippies in the 21st century), neither does
the issue feature any all-out winners, and
only a couple of pieces even come close.
Steve Stiles’s “My First Marijuana Expe-
rience” starts out well, and its middle see
tion, dealing with the protagonist’s first
foray into stoneland, is fairly funny and
true to the state of mind it depicts. The
story falters in its last two pages, however,
with a mediocre conclusion that has little
to do with the rest of the story. More con•
sistent, as well as featuring the issue’s best
interior artwork, is Reed Waller’s ‘Omaha
the Cat Dancer” story. As in other
“Omaha” stories, Waller imbues his cat
people with complex human personalities
and problems, giving his work a tone that
is at once realistic and other-worldly.
Although this particular story is somewhat
minor, Waller does a good job with charac-
teri:ations, and the pages where Omaha
and her friends engage in marijuana,
enhanced lovemaking are originally drawn
and nicely handled.
The rest of the material, while spora-
dically entertaining, contains evt•n less Of
the stoned ambiance found in the above-
mentioned pieces. Instead, most of the
other Dope stories aré fairly traditionally
done humor pieces, and while they feature
drugs as their subject, the humor they
derive from them is all surface, treating the
subject matter itself as what’s funny rather
than dealing with the more cerebra! humor
that comes from the state of mind that
drugs produce, This is the main problem
with the current issue of Dope: it fails to
make the distinction between drug humor
and drugged humor (the difference between
Cheech and Chong and George Carlin, for
example). ltEs a subtle but important dif-
ference, and it’sfthe main pitfall that the
dope humorist has to avoid. But since the
creators involved with Dope Comix have
chosen to deal with a subject that has such
a specialized and limited readership to
begin with, one wishes that they had
striven more for the deeper, substantive
comedy to be found in •their topic rather
than opt so often for the cheap, easy laugh.
Still, let’s hope that Denis Kitchen’s
gloomy prospectus for Dope Comix’s fate is
incorrect; in this instance, it’s the con-
sistency of the available forum that is im-
portant, even when the material it presents
is occasionally mediocre. And who knows?
Maybe the next time around,’ the writers
and artists appearing in Dope will actually
use the drugs they talk about to attain the
high-flying level of thought and entertain-
ment that have always made the best
undergrounds such an enjoyable reading
experience for both dopers and non-dopers
alike.

The ComixJoint guy seems to have read a different series than the rest of us:

This is the forty-fourth post in the Entire Kitchen Sink blog series.