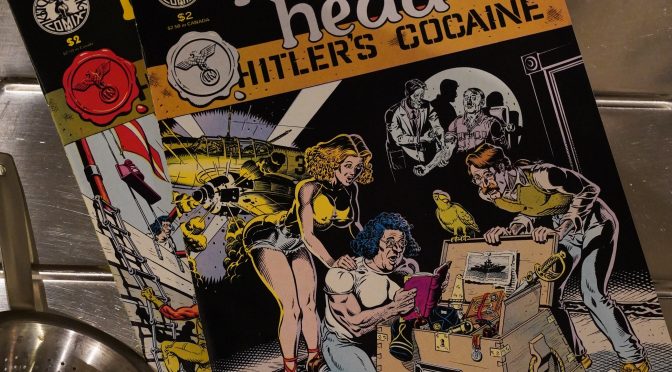 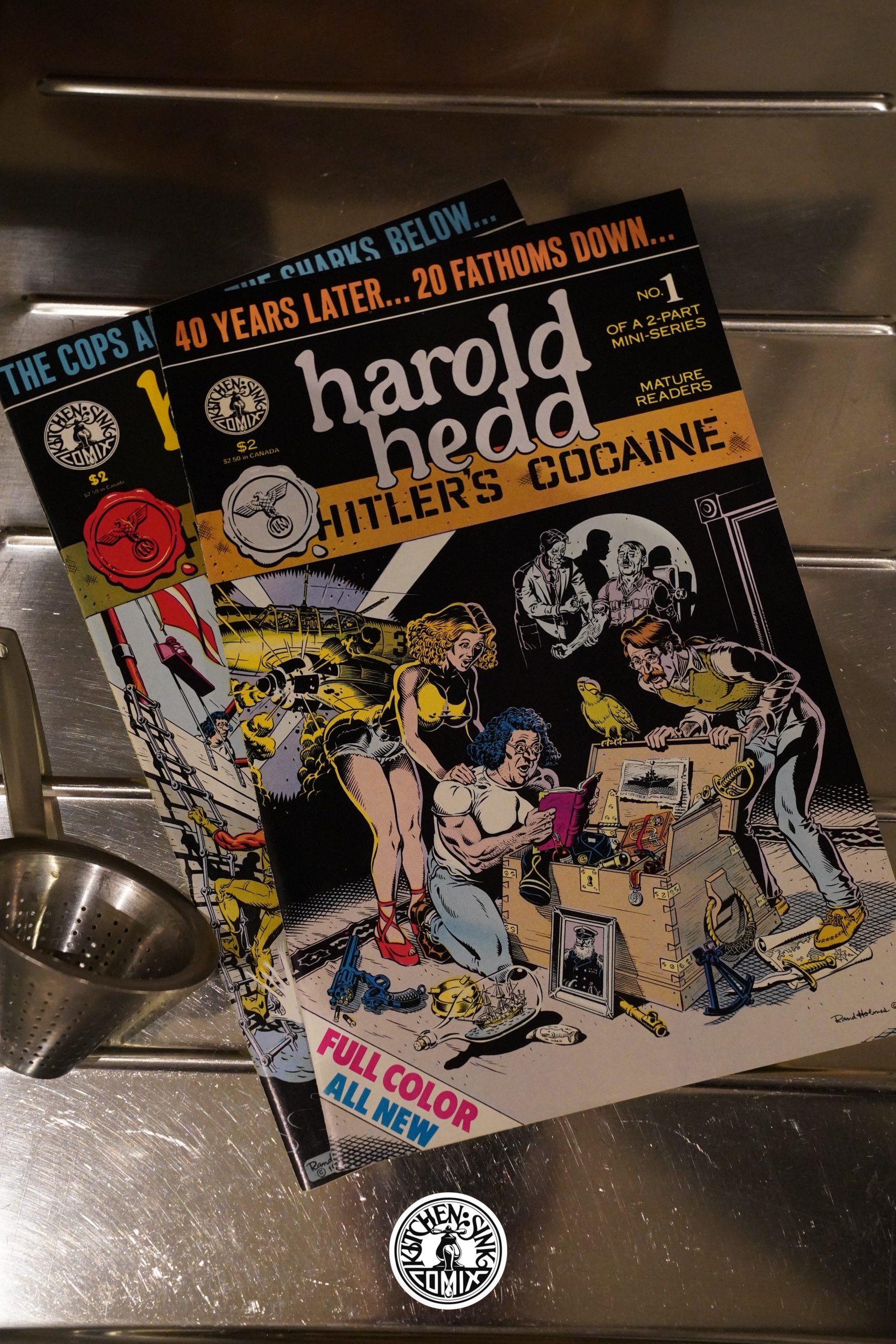 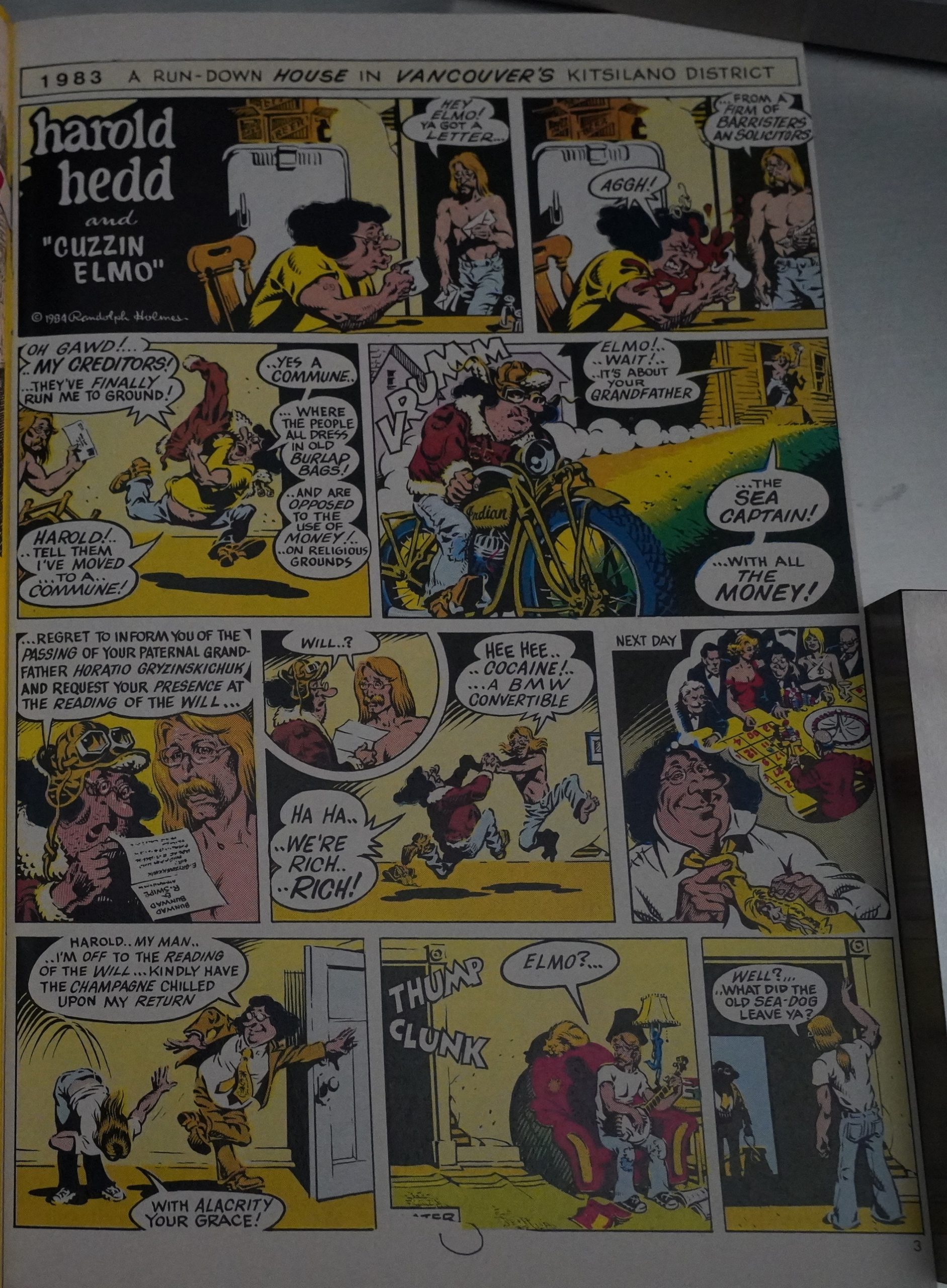 This is another book I bought at the time, so I guess I was fifteen? I remember enjoying it quite a bit, and a major part of that was because of the artwork which is a mixture of Wally Wood (in rendering) and perhaps Gilbert Sheldon’s figures and storytelling style? That is, it’s very dense, and gags keep on rolling in.

The rendering is simpler than his 70s style, though. 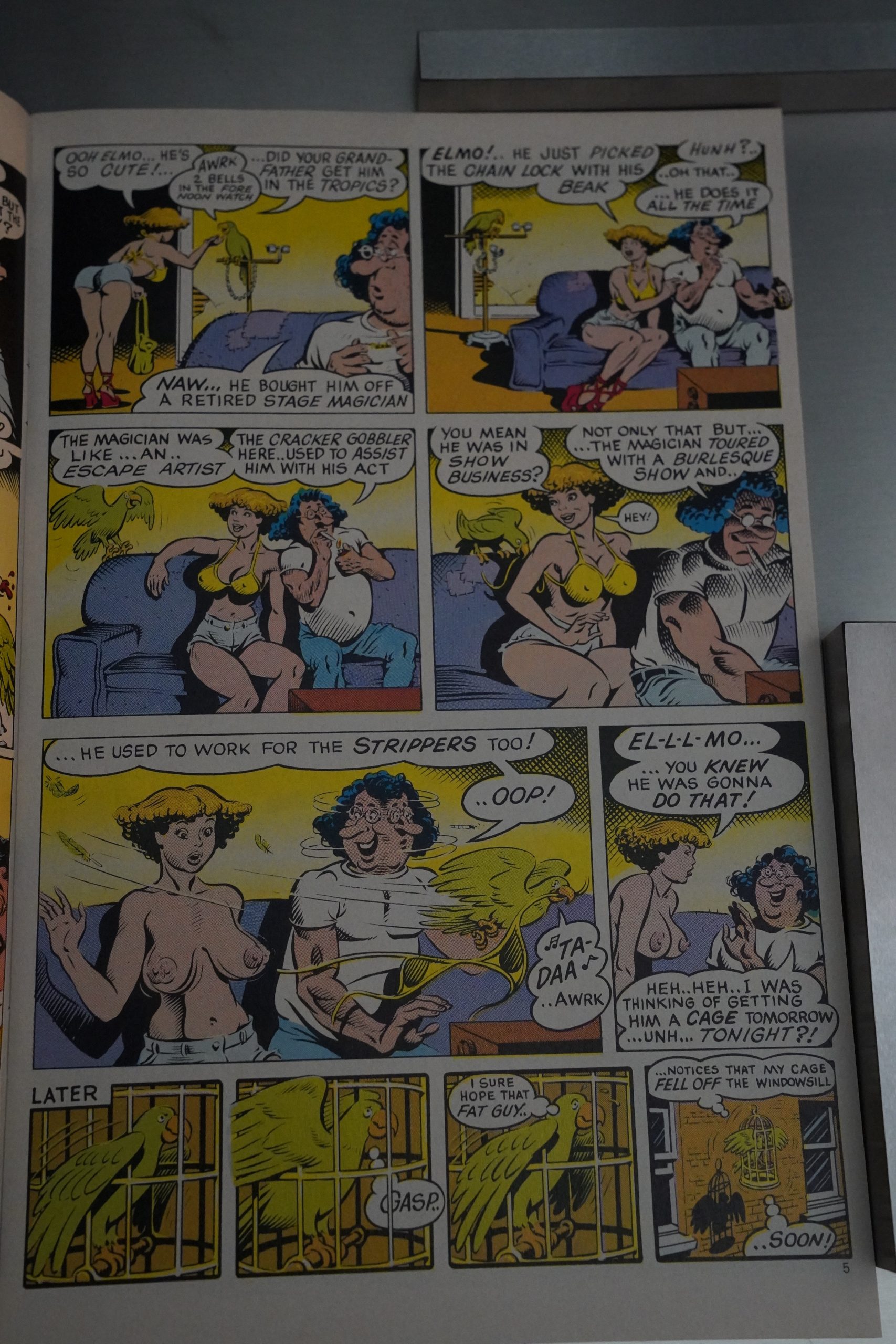 This starts off pretty oddly for a two issue series: Half the first issue is basically one page gags, slowly setting up the main plot and giving us some insight into the characters. 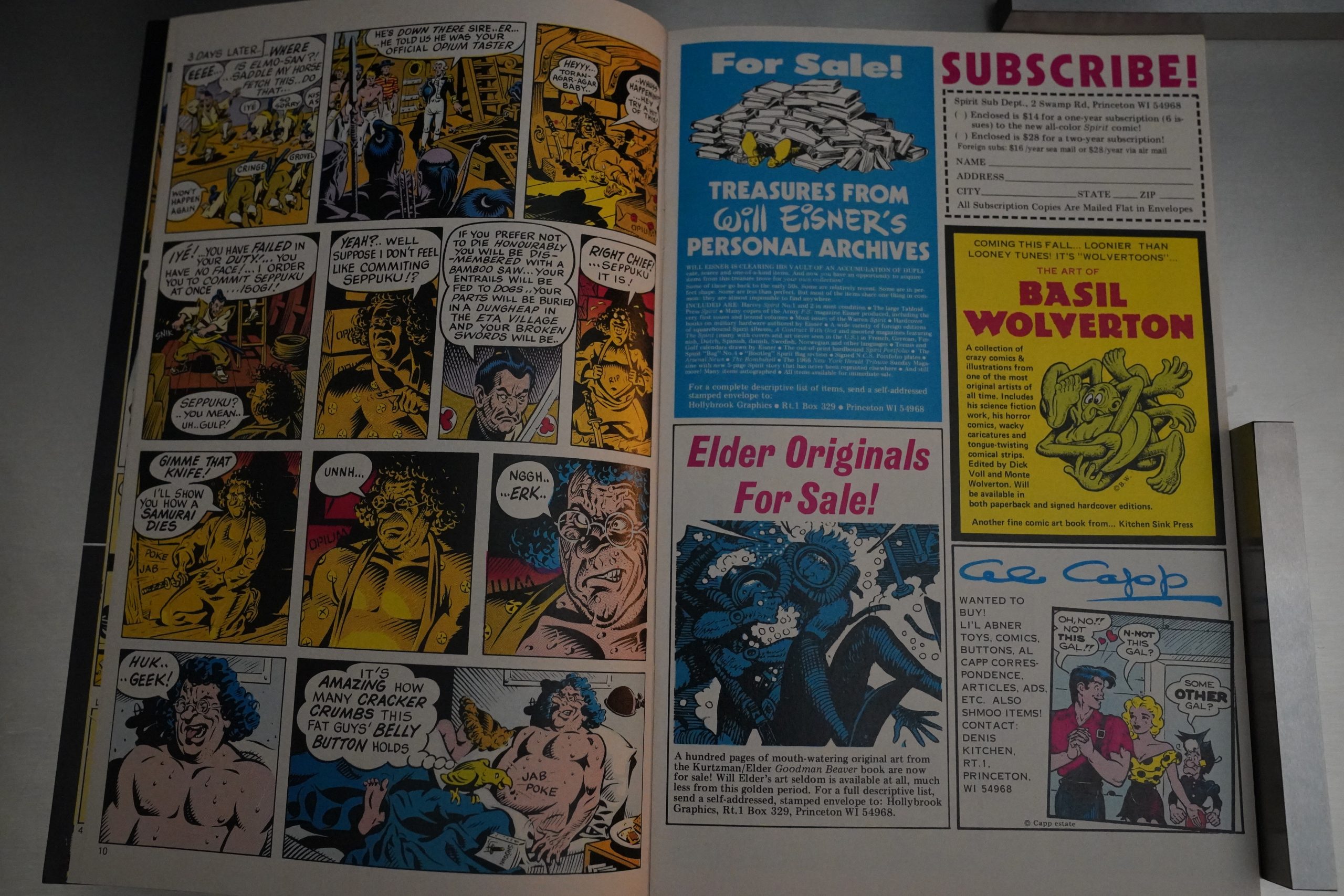 Indie publishers hadn’t quite figured out how to do “classier” comics — I mean, dropping pages of ads into the middle of indie comics would be pretty unheard of a couple years later.

I’m slightly intrigued by those ads — not only can you buy Bill Elder originals, but it sounds like Cat Yronwode was finally done cataloguing the Eisner archives, so they’re selling off duplicates and stuff. 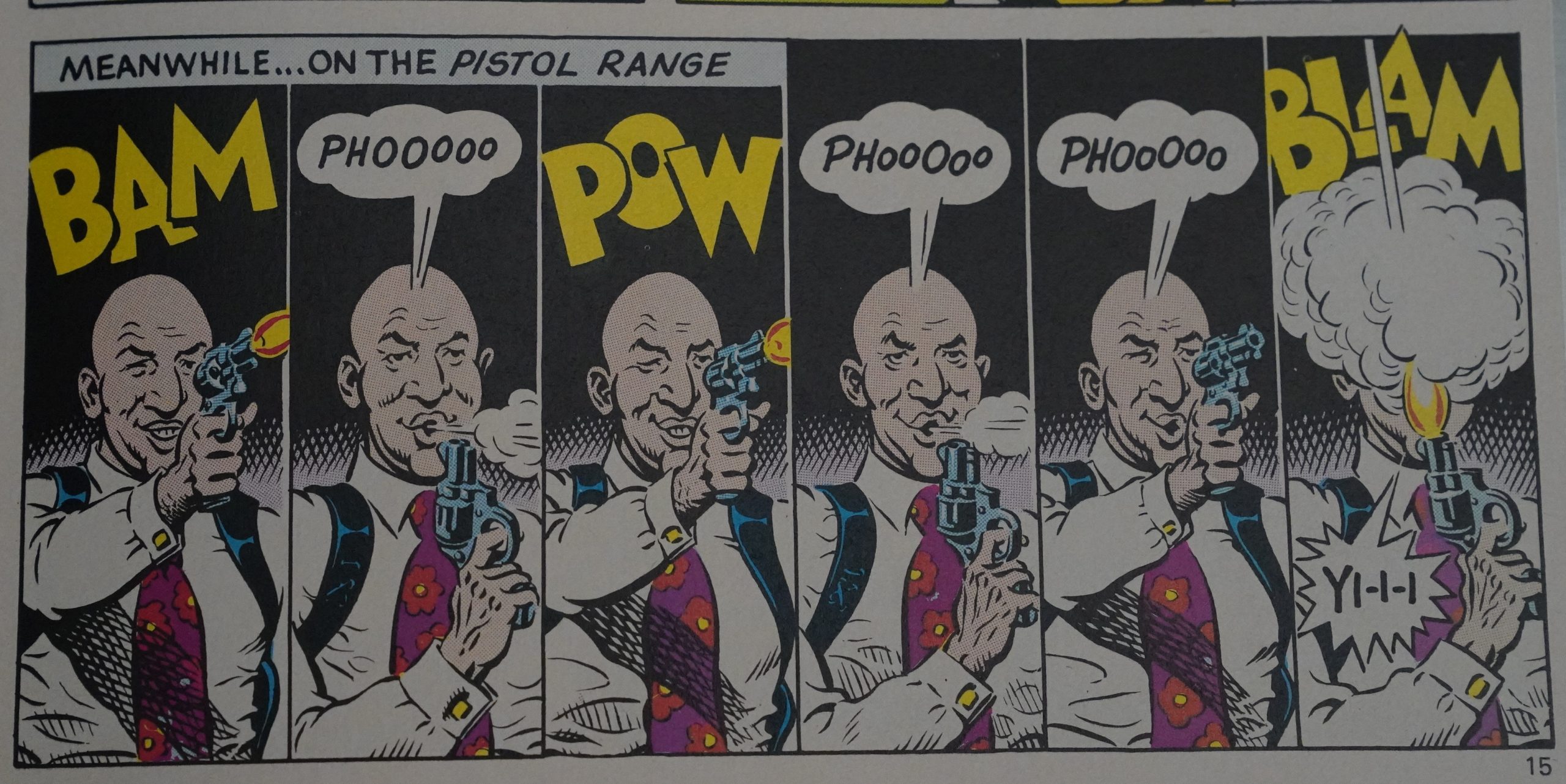 Oh yeah, the plot — Harold Hedd and his two friends go off to try to find a shipment of cocaine meant for Hitler, and they have both the cops (seen above) and some mobsters on their tails. It’s not a very complicated plot, but Holmes carries it off in a very amiable way. It doesn’t feel rushed or padded — it’s got a really nice flow to it. And lots of gags along the way. 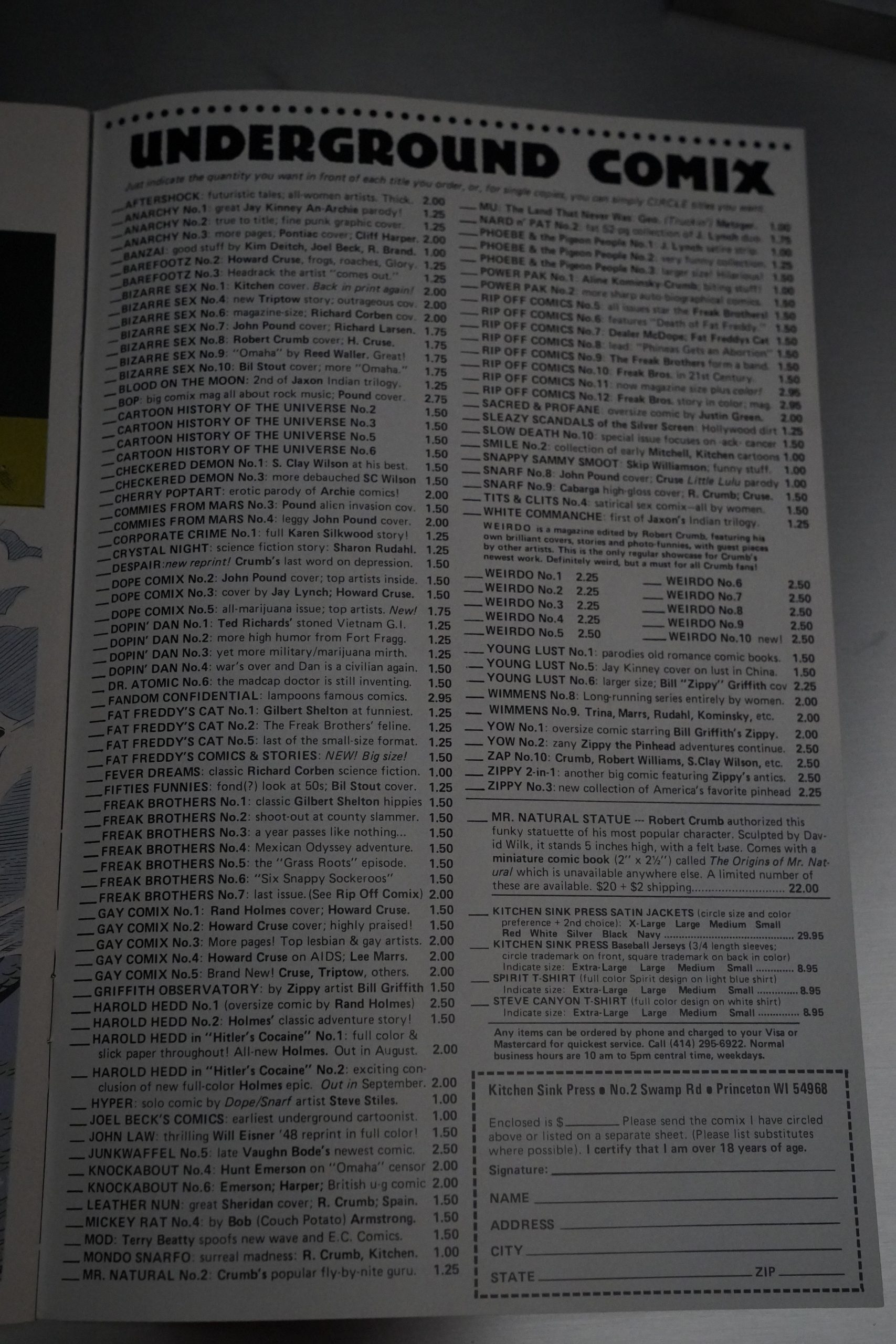 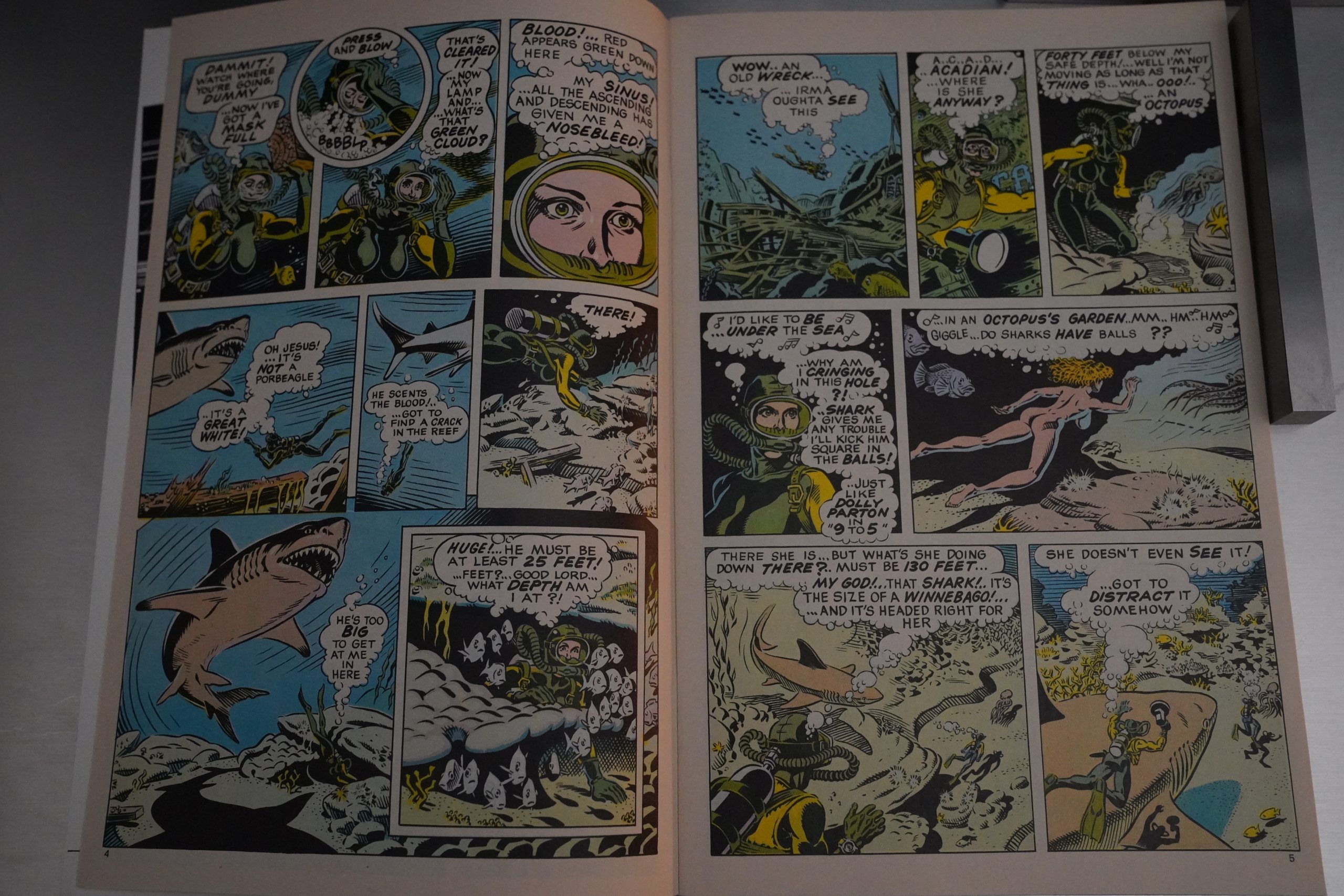 Having got all the preliminaries out of the way, the second issue is all about swimming around trying to find the treasure. So fewer gags and more action. 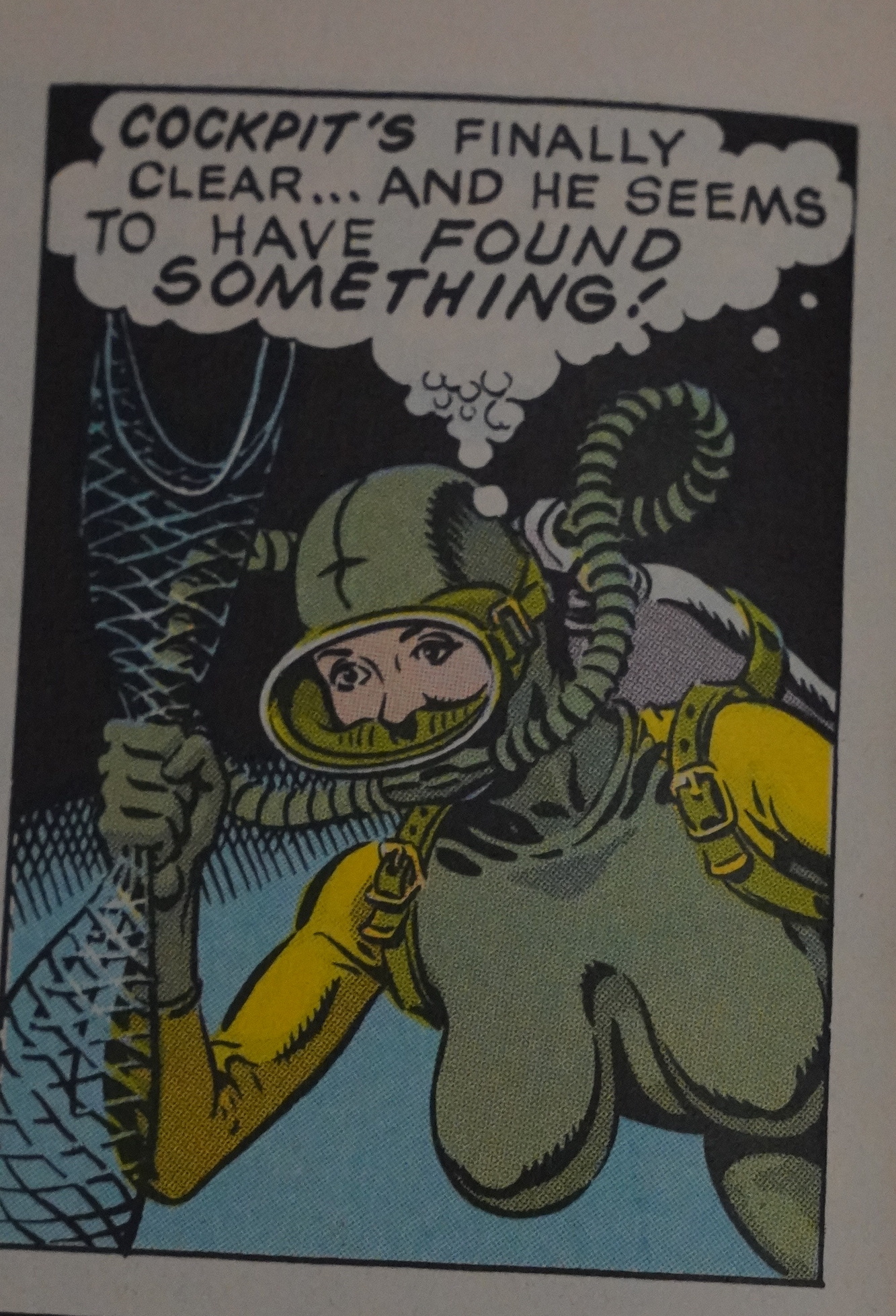 Holmes also invents the most practical scuba gear ever. 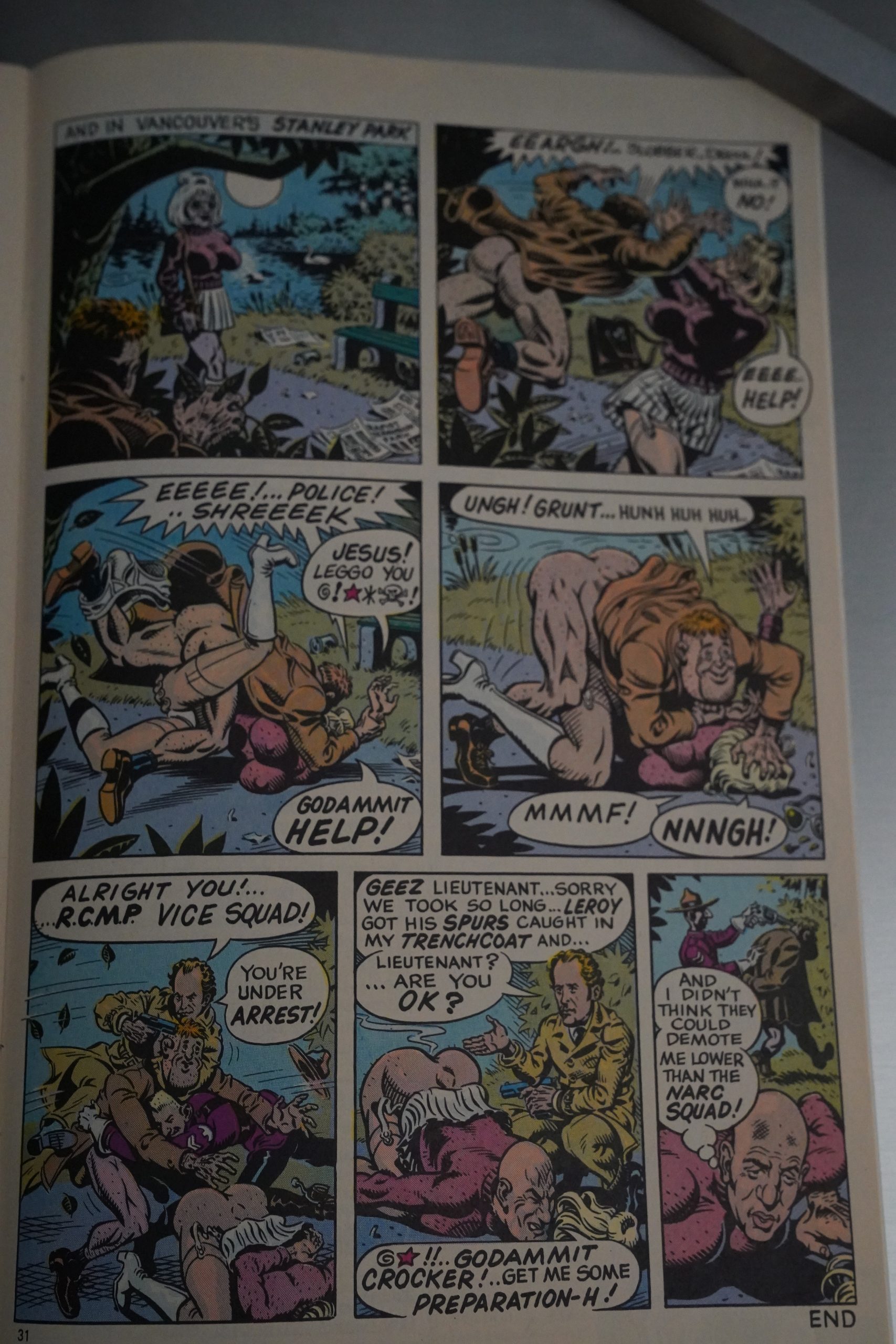 And everything ends in an ironical way — Hedd’s plans don’t come to fruition, but by an amazing twist, everything ends up happily for everybody. Except the cop, who has a more Underground ending.

Oh yeah, there isn’t that much nudity in this book, and I think that’s the only sex scene? (For some values of “sex scene”. (Editor: Remember to insert some sentences with the word “problematic” inserted here and there; don’t have the time right now.)

In the another new book.featuring
another old underground favorite—Harold
Hedd in “Hitler’s
and the remembrance of better things past,
makes one want tolike it. more than one
ultimately doesl The new two-issue mini-
series published by Kitchen sink Press is the
first Hedd Story by creator Rand Holmes
in 10 years, and a decade is such a long time
for expectations to simmer that anything
would probably seem a bit Of a let-down,
expecially considering Holmes’s impressive
work before. But the new story, as good as
it is in places, will probably disappöint most
Hedd-heads and, especially, admirers Of his
creator’s artwork.
part Of the problem with this new book
is, that as I said above, Holmes has given
himself such an impressive past body of
•work (small though it may be) that it Would
be hard for anyone to surpass it. Anyone
who ahs ever read the second original
Harold Hedd book can vouch that, when
the man is in peak fcrm, thetQ• are few con-
temporary artists better at creating a
realistic adventure-strip than Rand Holmes,
and not many more comics writers who can
be so funny. The second issue Of Harold
Hedd and aits book-length tale Of dope-
smuggling is still a joy, with the kind of
break-neck action and gritty, snappy
dialogue that puts most action films to
shame. Best Of all was the beautiful artwork;
While only a total comics novice would be
unable to see at a glance the heavy’ debt
Holmes’s art Owed that Of Wally Wood,
the panels looked so gorgeous and the
action flowed so well that whatever degree
of derivativeness there might be in spots
was, and is, easily forgiven.
Holmes’s meticulous and richly embell-
ished artwork is seen ‘at little more than
half-strength in the new Hedd adventure
“Hitler’s Cocaine,” and while it is the one
single aspect of the Older books that is the
most sorely missed, the whole work has a
peculiar not-quite-right look that is dis-
concerting. Granted,there’s nothing wrong
with the story’s premise: in fact, the xon.
cept that a giant cache Of primo cocaine in-
tended to bolster the Fuhrer’s last days is
waiting to be retrieved from the ocean’s
bottom by Harold and cousin Elmo is even
a better one than that of the earlier classic.
Unfortunately, the story takes much too
long to really get going, and for the first
two-thirds of the first book, there is a lot
of pointless meandering and diffusion of the
narrative that is unlike Holmes at his best.
Whereas in the earlier Hedd epic Holmes
structured the Stow With the care and preci-
Sion of a novelist, here he throws in bits
and Shtick primarily, it seems, just to pad
out the book. He also introduces some truly
bad characters in the Story that further slow
down the action, including a mediocre and
none-too-timely parody of Kojak. Things
pick up in the second issue, and the
climax(es) are good and surprising, but they
need a better, more solid build-up than
what Holmes has delivered.
The Kojak take-off (complete with a
second-banana named Crocker) raises the
question, of just how long this piece had
been on Holmes’s drawing board before he
finally finished it. The book’s first few
chapters have a disjointed, choppy rhythm
to them that gives the impression that the
work was done in pieces at the beginning,
and those pieces were never satisfactorily
sewn together. In addition to the Kojak
character, there is’ also a three-page parody
Of “Shogun,” of all things, that does
nothing except bring the story to a
screeching halt. The worst thing about the
patchy plotting is that in trying to incor-
porate all the• secondary storylines and
characters, Holmes slights his most valuable
asset—his main character. Even though the
book is named for him, Harold has really
very little to do with most of the action in
the book, and his great who-gives-a-shit per-
sonality hardly comes through at all.

I think that’s a fair critique.

Since the early ’70s Holmes the artist has
built his reputation around his Woodlike
renderings, most tellingly in Bruce Jones’s
recent EC modernizations, which has
given him an audience outside the tradi-
tional underground. “Cocaine” has been
packaged, in part, with the hope that at
least part of that non-underground reader-
ship will follow the artist into his new
Kitchen title, and Holmes has made some
visual concessions to that readership (no
dripping depictions Of cunnilingus here,
folks, like we saw in Harold’s last appear-
ance) without abandoning the basics of his
character’s universe. Holmes’s Hedd is still
a drop-out • with no specifically identified
means of economic support; cousin Elmo,
his biker roommate, still meanders
through a series Of low-paying jobs, living
primarily, one suspects, off the latest in a
series of unbelievably voluptuous girl-
friends. Like Sheltön’s Freak -Bros.,
Holmes’s characters have made few conces-
sions to the ’80s, and nobody really expects
them to, any more.than they expect Dag-
wood Bumstead to get a new haircut.
What’s occasionally disconcerting about
the world in “Cocaine” is its umiter-artist’s
relative unhipness, most specifically in
regards to his parodying use of media
figures. “Cocaine” contains two full.
blown parodies (Of James Clavell’s Shogun
and Telly Savalas’s Kojak) that give one the
impression of a •work begun three years
earlier—as a potential series for one of the
dope mags, perhaps—and only recently
finished. These dated references play
awkwardly against Holmes’s introductory
assertion that his present adventure is tak-
‘ ing place in 1983. Perhaps a little concerted
couch potatoing is in order, Rand.

At this point, Holmes’s tale has the
potential to rival Harold Hedd ‘2’s straight
action sequences, if the artist can keep a
hold on his more digressive tendencies.
Holmes’s graphics, as befits an artist’ who
has been mining a style for the better part
of a decade, is slick, assured, and attractive.
Ocasionally his figures move like they’ve
got a steel rod up their back (especially
Elmo’s girlfriend, Irma, who looks twice as
unnatural with her overblown physique),
but after the first few pages they’ve created
their own physical integrity: I could have
done without Holmes’s placement of a
series of tiny parrot strips at the bottom of
several pages of his first chapter: they’re too
openly reminiscent of “Fat Freddie’s Cat”
and disruptive to continuity besides. But
those who have come to Holmes via his
Jones-scripted artwork probably won’t be
disappointed by hiw work here.
For all my reservations about the work
and its package, I genuinely enjoyed the
first part of Holmes’s re-entry into
underground work, and am looking for-
ward to its conclusion. I’ve even been fan-
tasizing about some color mini-series with
other former underground heroes: new
Mr. Natural adventure perhaps, or some-
thing with Jumpin’ Jack Flesh. Noy there’s
a hero for the ’80s!

I always admired the way Rand Holmes
turned his back on his still-marketable set
of characters when they became socially
Obsolete. If he went for a big payday after
10 years then I certainly wouldn’t begrudge
it to him. You didn’t get the impression
that he was doing it out of love in the first
book of the new series. Where Gilbert
Shelton (him again) uses the Freak
Brothers as a symbol of his estrangement
from current bohemia, Holmes just
dropped his old characters into the pre-
sent, styles and values unchanged, as if
they’d been trapped in an ice cube like
Captain America. It even got its villain
from a long-dead TV show. Fortunately
the second part gets down to pure comic
adventure, and a good adventure comic is
never dated. Hitler’s Cocaine is a worthy
successor to Harold Hedd (old reckon-
ing) which was the best adventure comic
ever to come out of the underground. If
Holmes wants to go into business, maybe a
new adventure title would be the way to
go.

This is the seventy-second post in the Entire Kitchen Sink blog series.