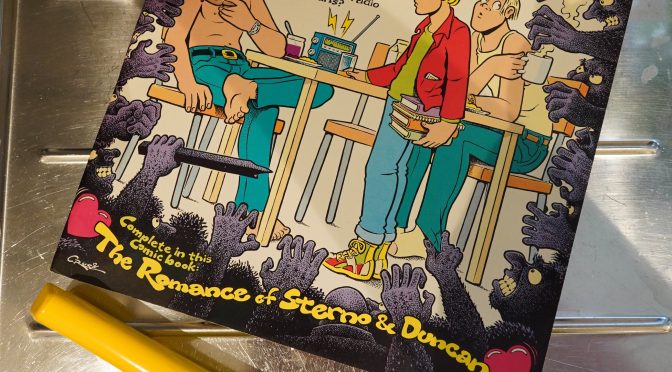 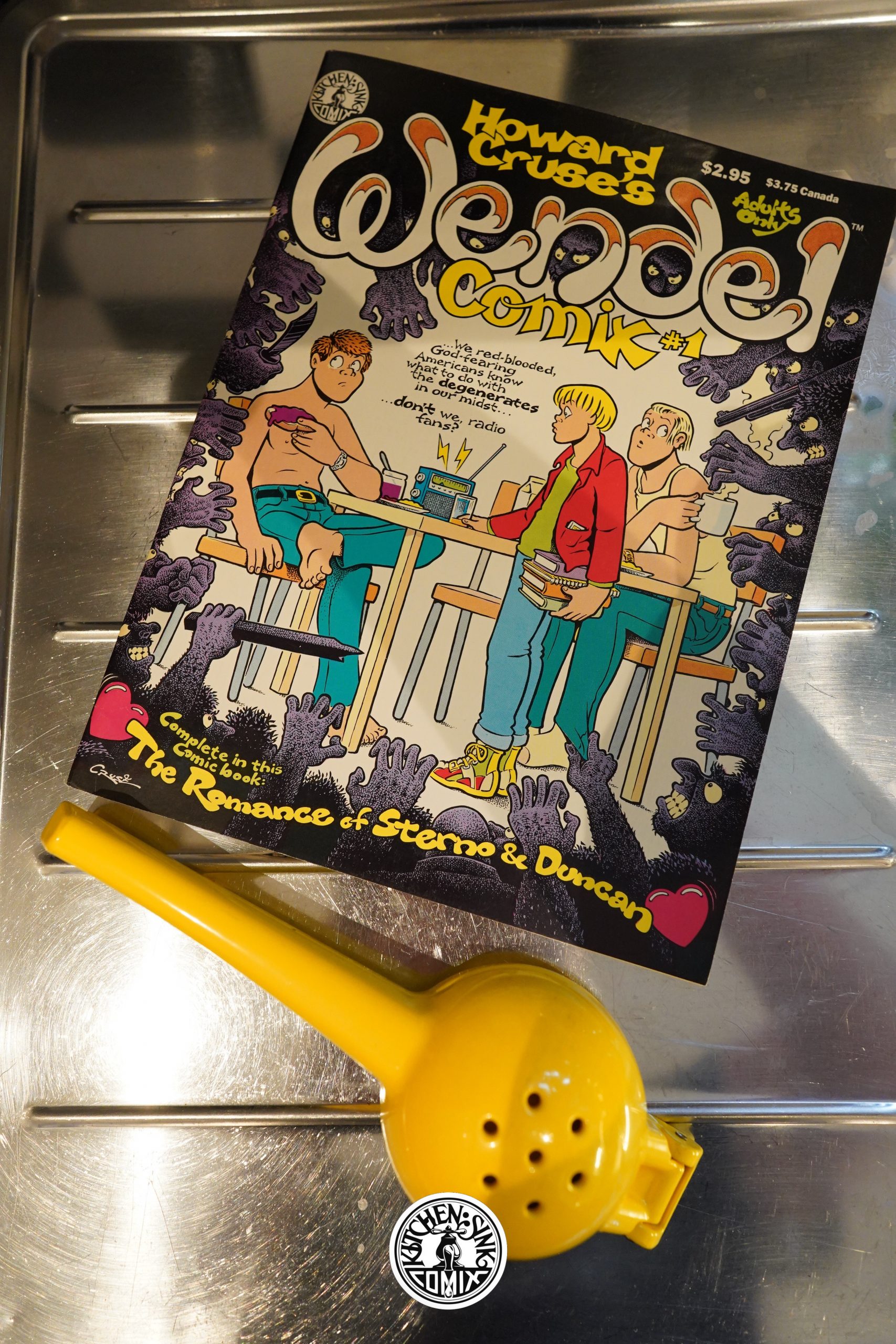 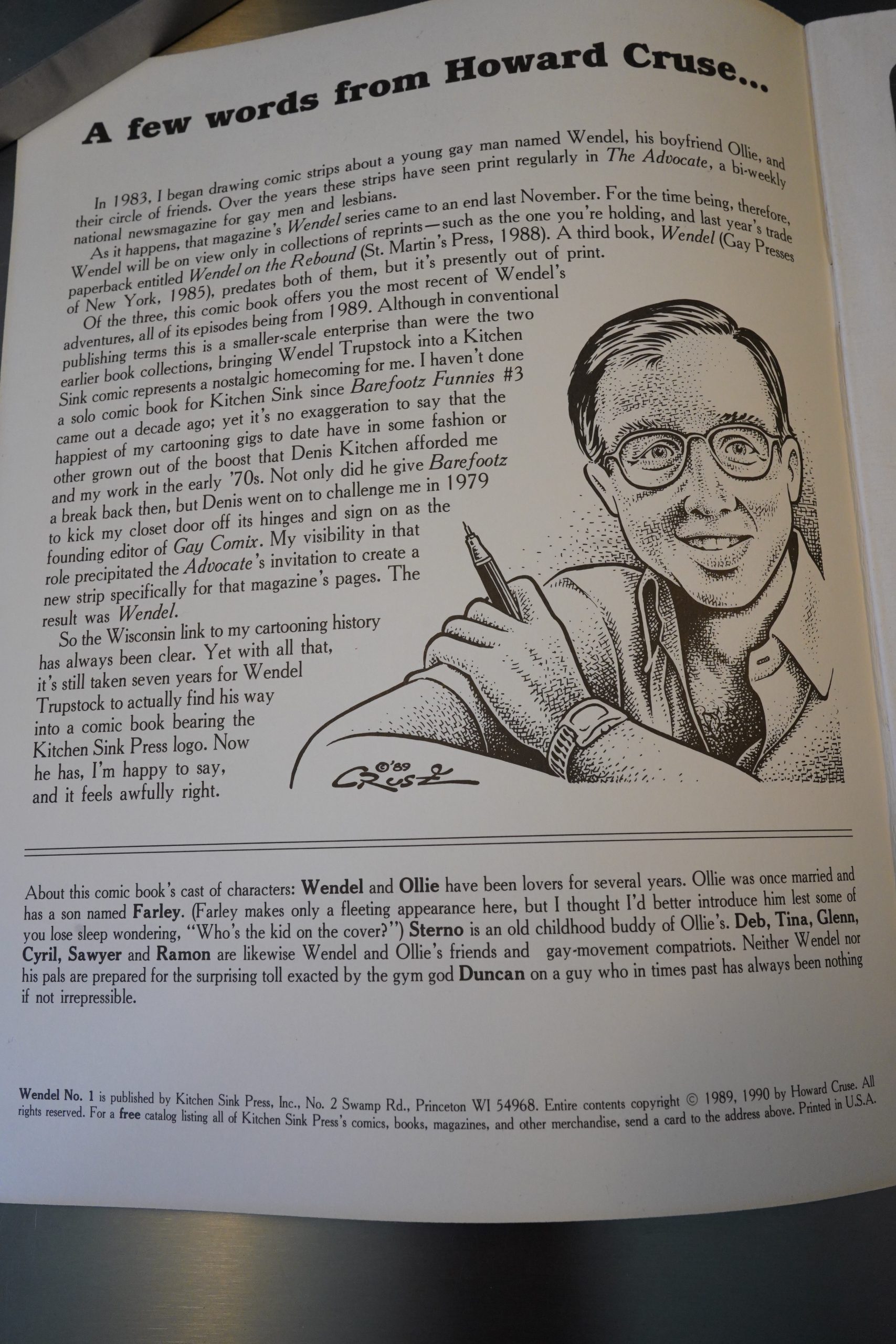 Wendel had been running in The Advocate for quite a while, and St. Martin’s Press had released a big collection the year before. Which makes this 32-page book a bit odd — did Cruse know that he wouldn’t have enough material for a new book (because he was winding down the strip to concentrate on Stuck Rubber Baby), so it made sense to just do a small collection of the strips that he did after the previous book? Or was he just planning on doing these smaller collections on a regular basis? (The cover does say “#1”.) 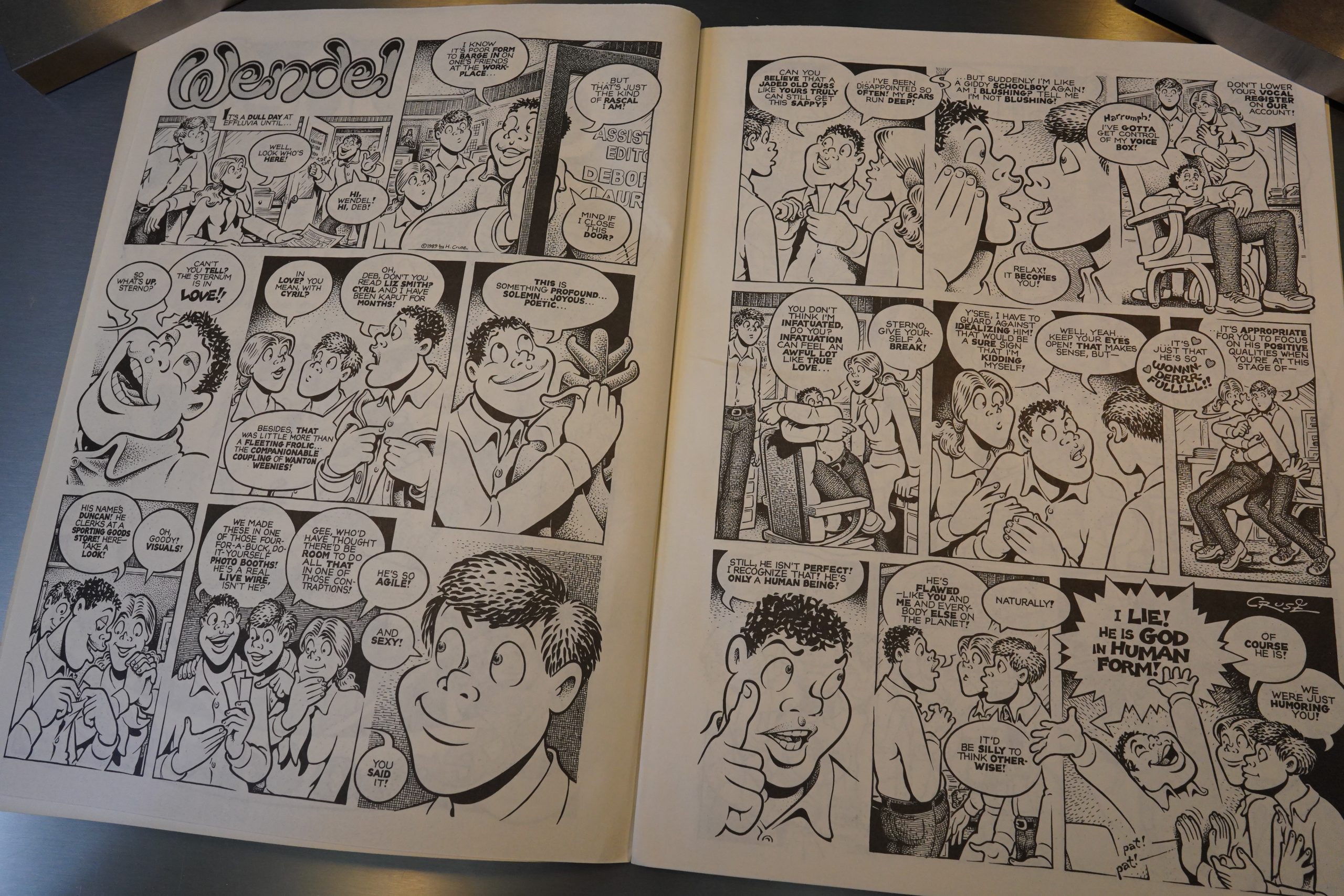 But it turns out that the book as is makes a lot of sense: We get the entire saga of the Sterno and Duncan romance, and Wendel & Ollie don’t feature as heavily. So it stands alone quite well, even though we don’t really get much context on any of the characters. 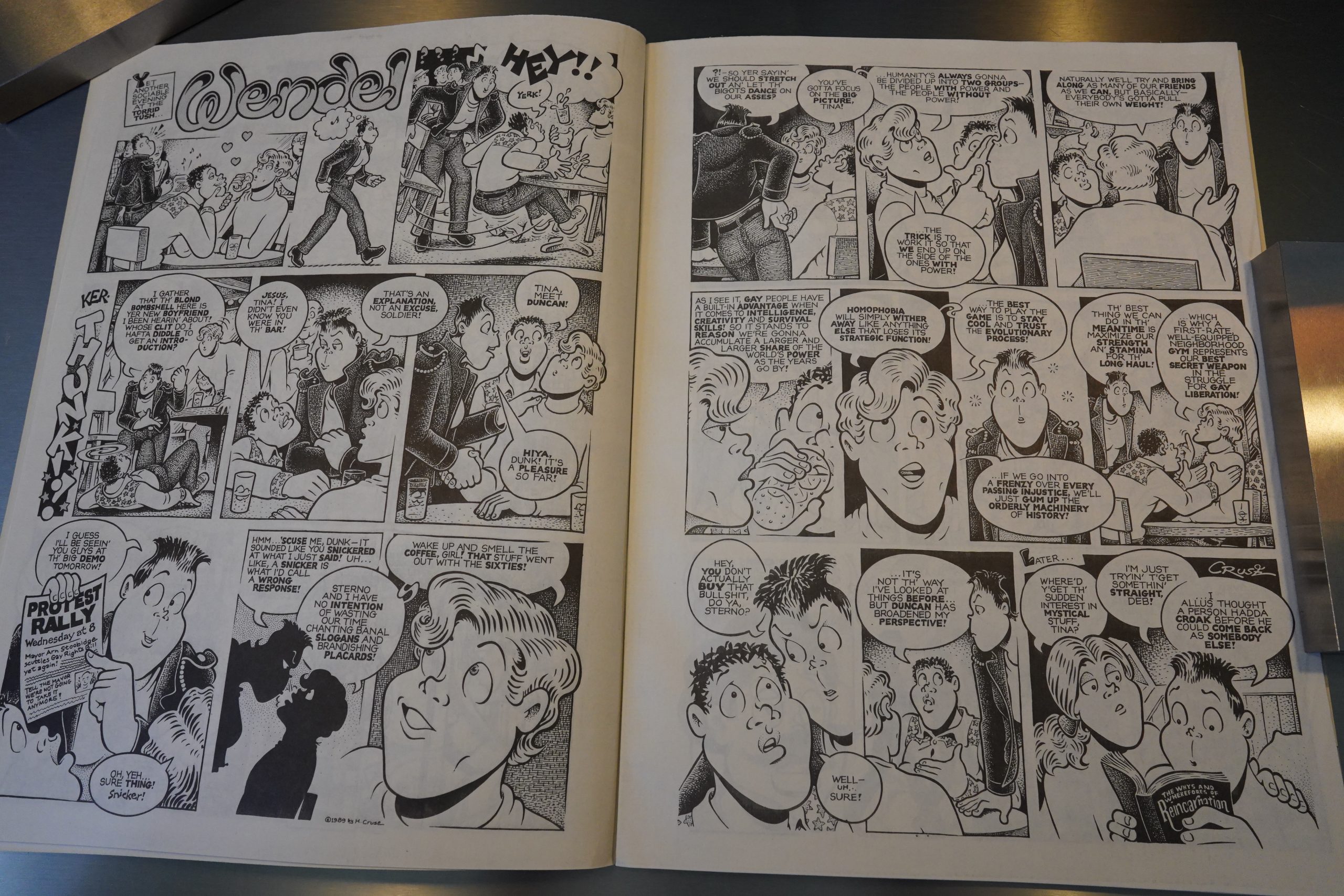 The book is, as always with Cruse, very well drawn, and with amusing repartee throughout. Some of the gags seem like they’re topical, or perhaps I’m just too dense to get the joke? Tina seems to imply that Duncan is the reincarnation of some other dweeb that was alive at the time, but I don’t get the reference. 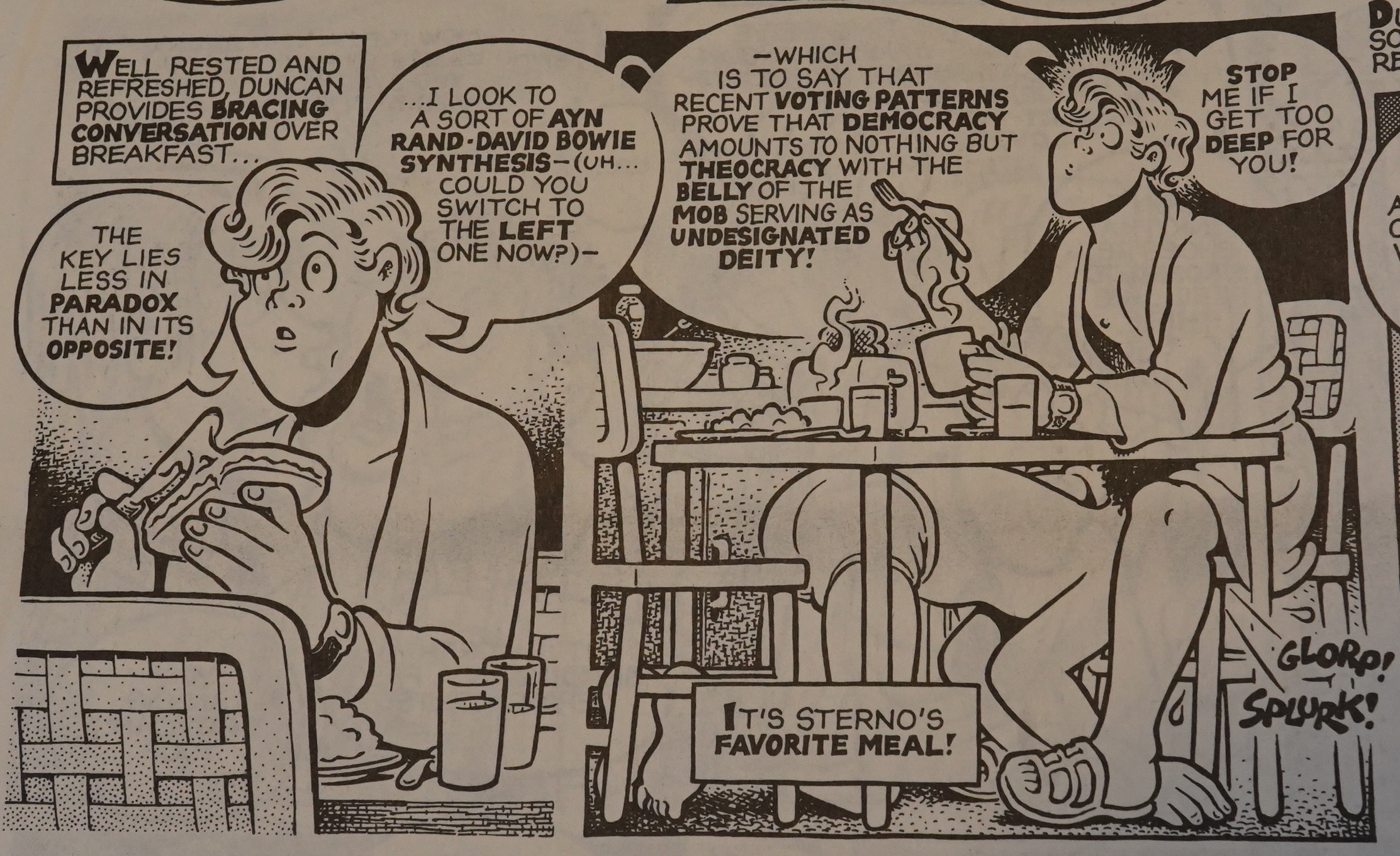 So deep! Cruse does a perfect parody of this kind of twit.

And he’s not afraid to go way cartoony-over-the-top when the plot demands it.

A complete Wendel book was published in 2011, and you can get a copy cheaply from Denis Kitchen now. (He didn’t publish that book, though.)

The trouble with Wendel is Howard
Cruse’s tenden+’ to write as if he were
looking over his shoulder (a difficult
trick for any cartoonist). He gets so
wrapped up in his self-chosen (and
responsibly so) role as Spokesman Of
His People that he becomes self-
conscious and inhibited. You would
think that drawing for The Avocate,
a gay paper, he would be able to loos-
en up, but Wendel is so concerned
with having characters who are not
stereotypes that the characters
stereotypes. When you are overly con-
cerned with group image, and afraid
that every characteristic you give to
an individual will be taken as a
characteristic Of the group, then au-
thentic characterization is impossible.
Most of Wendel #1 is taken up with
the romance of Sterno, one Of the
regular characters, and a weight room
Adonis named Duncan. Sterno has
been driven to transports Of lust and
will do most anything to hang on to
this fellow. Though it is not said in so
many words, it is clear that what at-
tracts Duncan is the opportunity to
manipulate and control, and he has
fixed on Sterno with the uncanny
radar such persons have for the
vulnerable. The thing is, Sterno has
been up to now a committed militant
firebrand, and yet falls completely
under Duncan’s influence with nary
a kick or whimper. Which is an in-
teresting character point: why would
these two seemingly contradictory
traits fit into the same personality?
Unfortunately, rather than going into
it in any depth, Cruse treats it as a
paroxysm of lust which has temporari-
ly blinded the “real” Sterno, who will
be brought out by a couple Of shock
events, Duncan’s spell broken entire-
ly. Not that such things don’t hap-
pen — to persons of all sexual persua-
sions — but as fiction this simplistic
motivation is just not as interesting as
a deeper one. It becomes situation
comedy characterization; if this
week’s plot demands that Offlcer Tutti
suddenly develops a burning desire to
play the tuba, then Officer Tutti is go-
ing to get himself a tuba, and it will
completely forgotten by next week.
Since you don’t see the same kind of
inhibition in his other work as you see
in Wendel, you have to wonder wheth-
er Sterno’s relationship with Duncan
isn’t a little like Cruse’s relationship
with The Advocate, and if he too isn’t
better off with it over.

This is the one hundred and twentieth post in the Entire Kitchen Sink blog series.