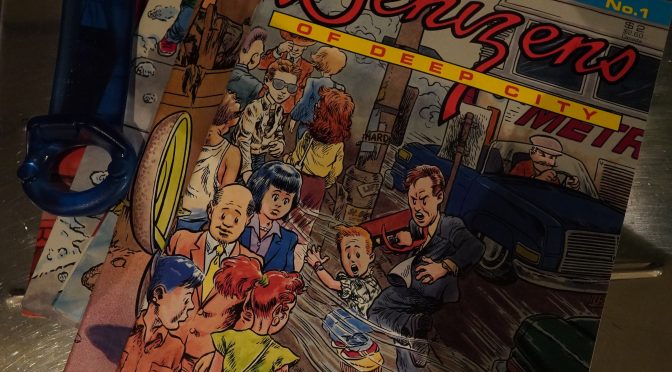 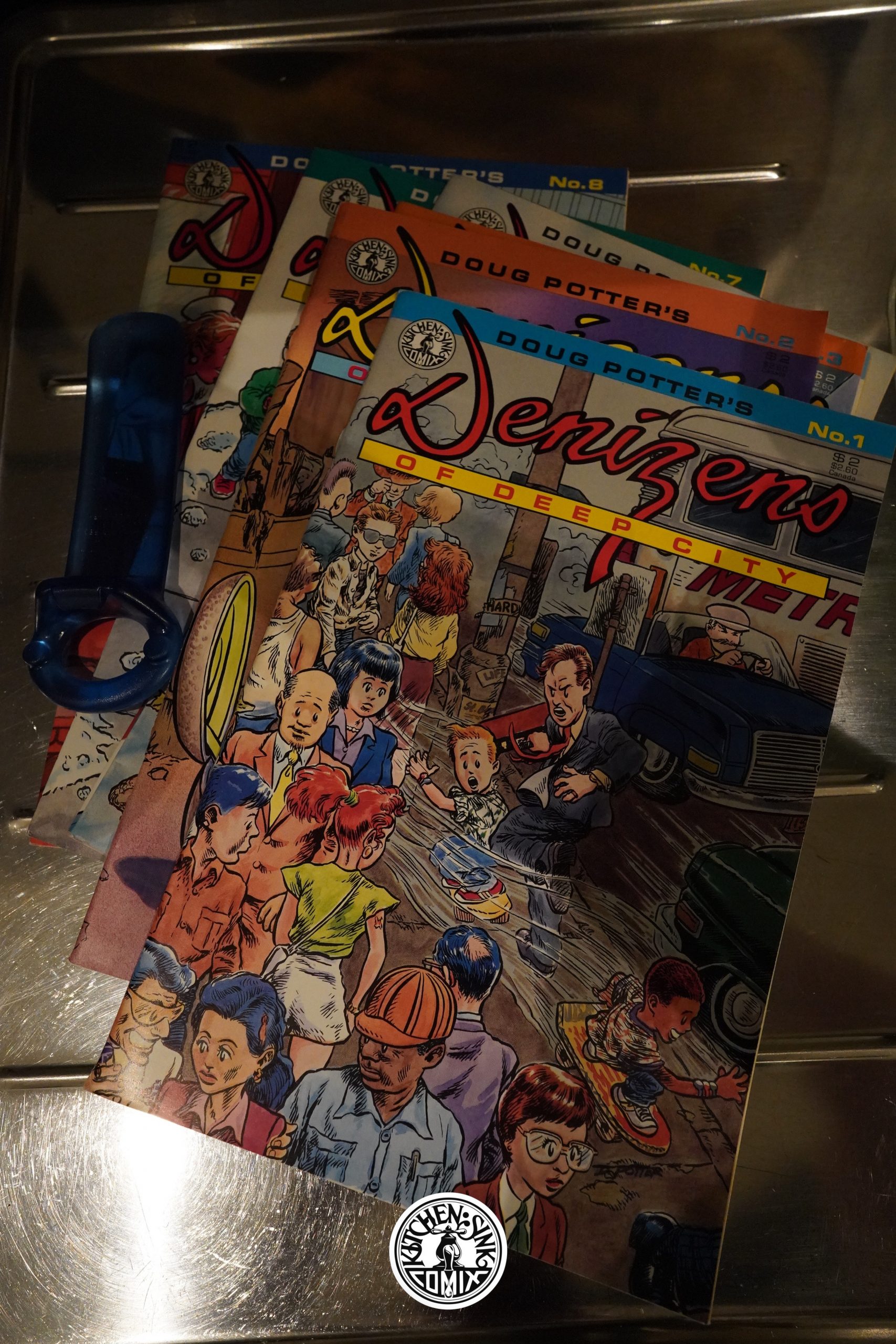 I’m pretty sure I had this back in the 80s, but I had just gone off to the university, and my comics buying habits had to be cut back severely. I do remember… not liking it a whole lot? But looking at the books now, I don’t recall anything more specific than that, and I may be thinking that just because I have a totally rational aversion to all artwork that features bobble heads.

Just look at that cover to the first issue. *shiver*

But perhaps this is great? Let’s start reading. 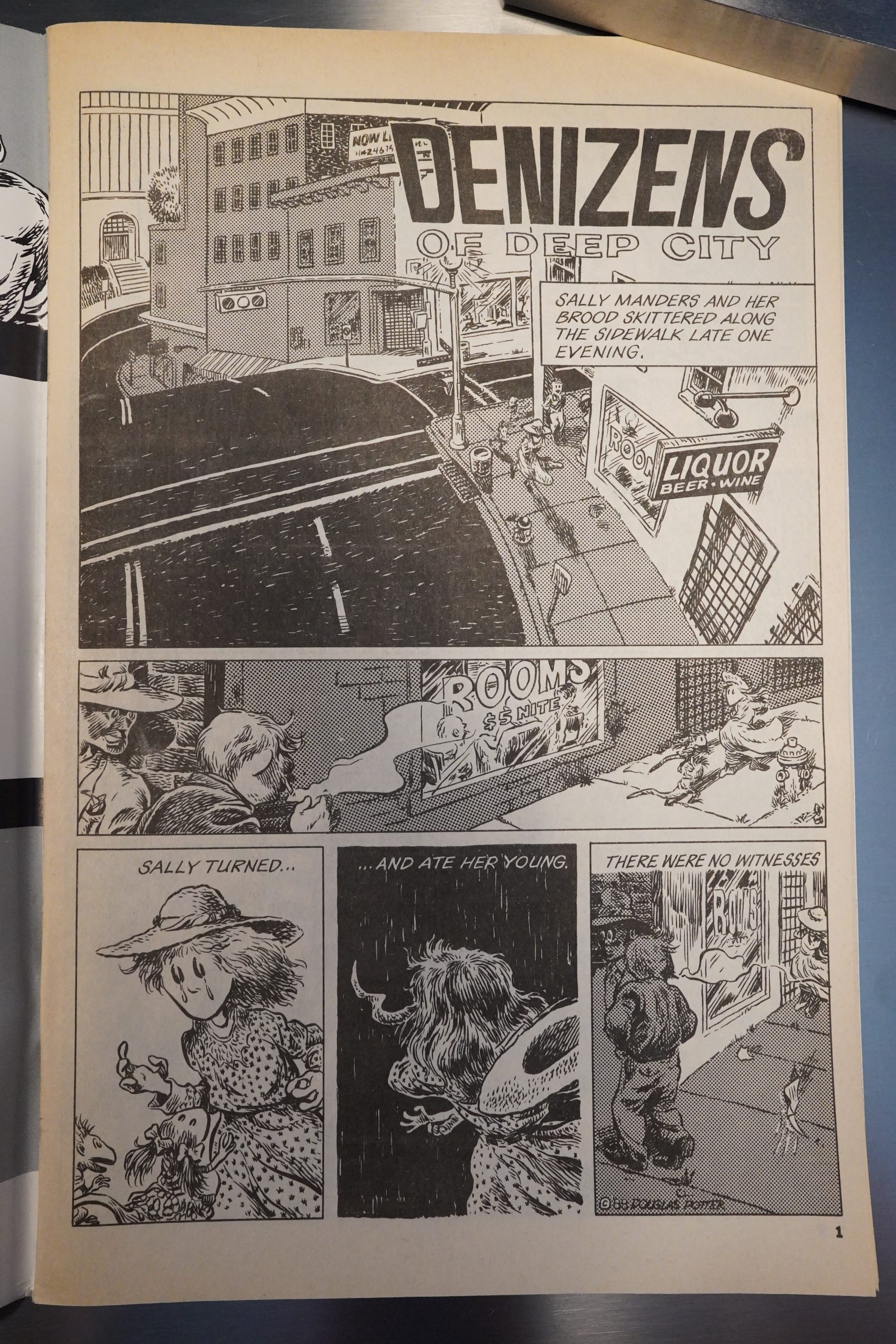 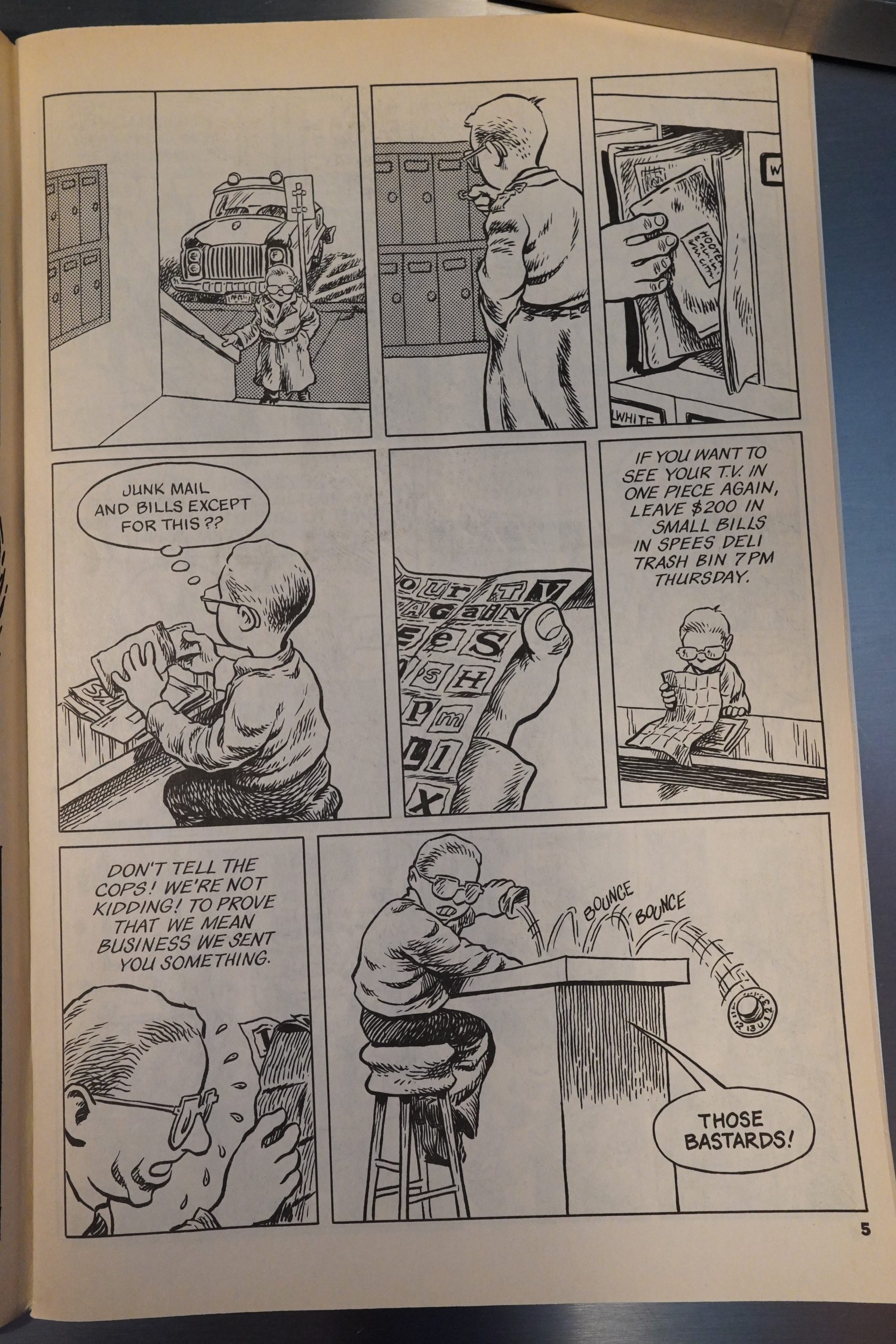 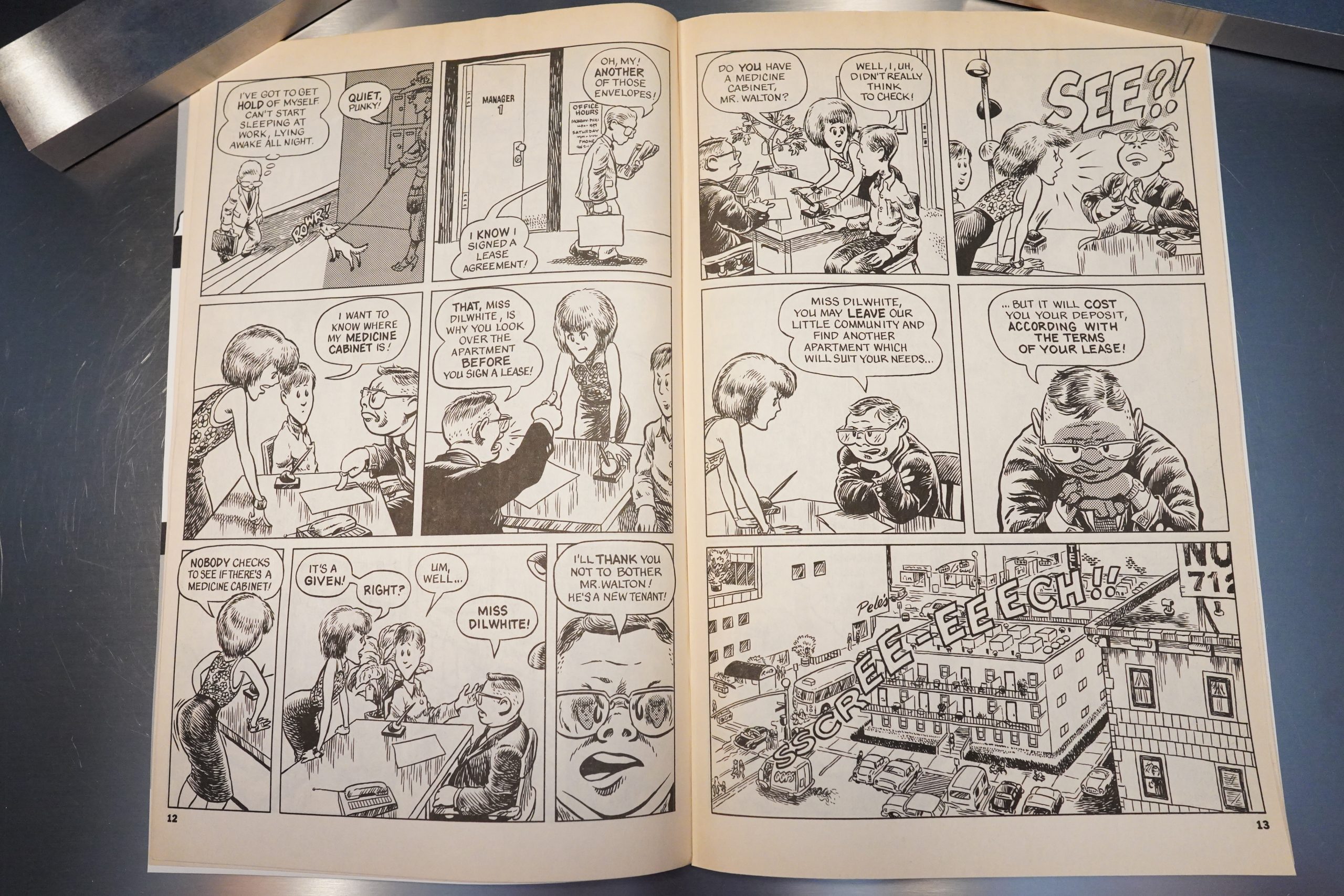 What I’m trying to get at here is that this book is very difficult to characterise. We’re not talking about realistic slice of life, or science fiction, or horror, or absurd satire — instead it veers from one mode to the next from page to page. 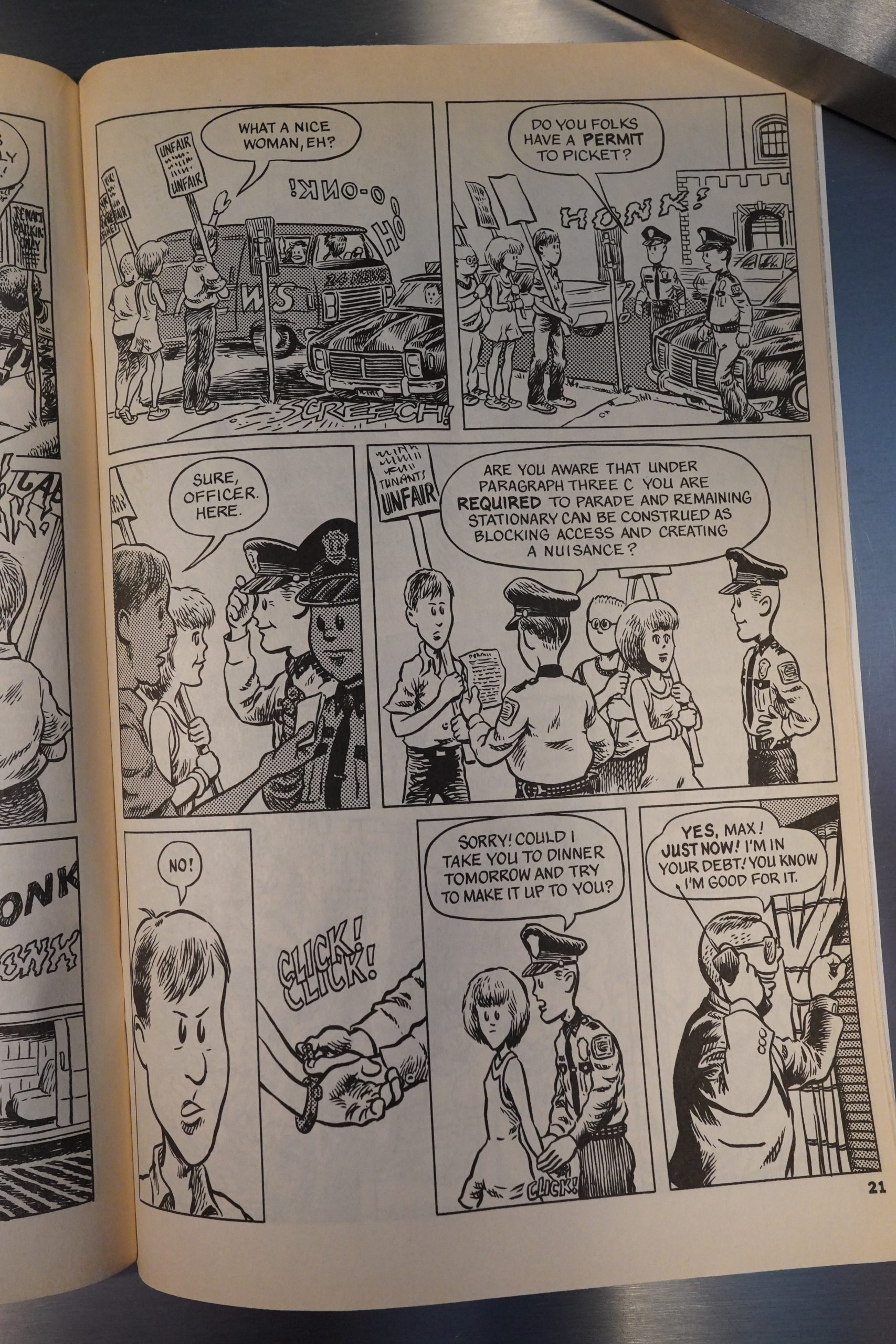 Oh, did I mention that there’s also an entire subtext about some shadowy politicians with unclear motivations that are sabotaging things at random?

All of this sounds wonderful, and I see what Potter is going for — ambiguous stories that leave a lot of to the reader to puzzle out. But it doesn’t quite work for me, because I don’t really feel confident that there’s much more here than meets the eye. 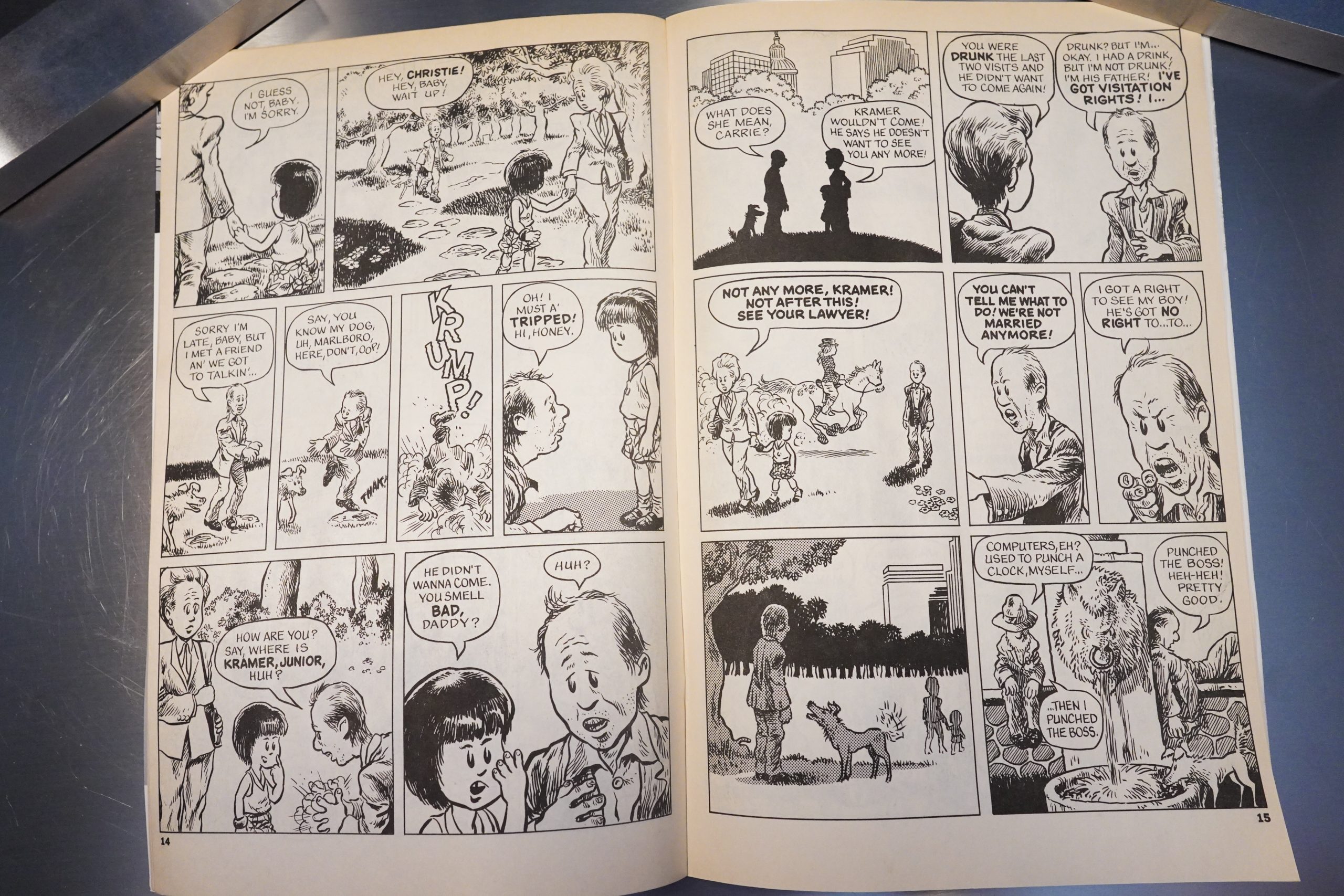 For instance, here we have a deadbeat father/estranged child scene that’s so hackneyed that it seems almost like a parody (but I don’t think it’s meant to be). 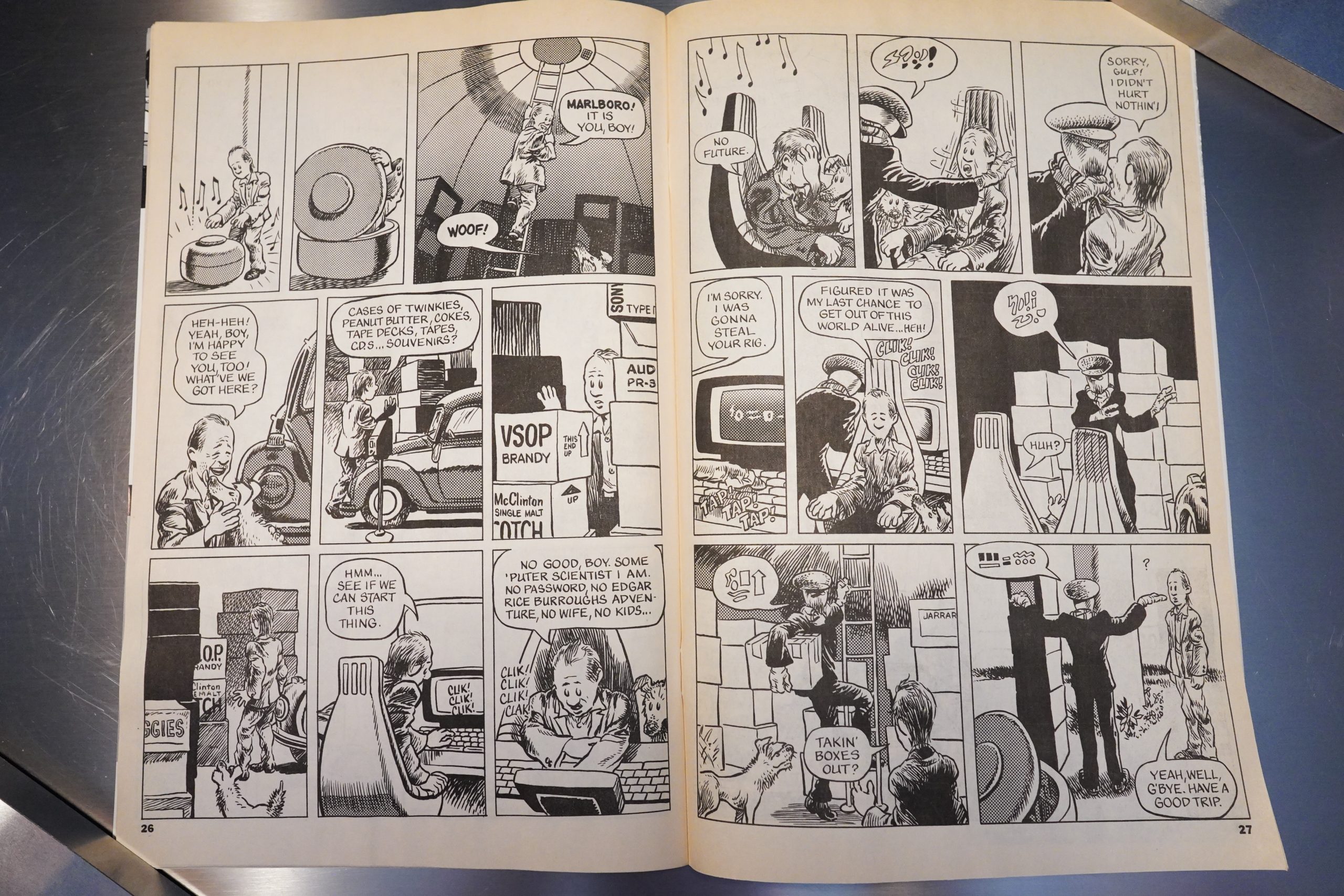 And then, a few pages later, the deadbeat father discovers a… spaceship? It’s larger on the inside.

And I’m not sure whether we ever see that guy again — but mostly because it’s just hard to tell the characters from each other. The all have grotesquely large heads and few distinguishing features beyond dress and hairdos. (Come to think if it now, he’s probably the guy the kids stumble across in the park later…) 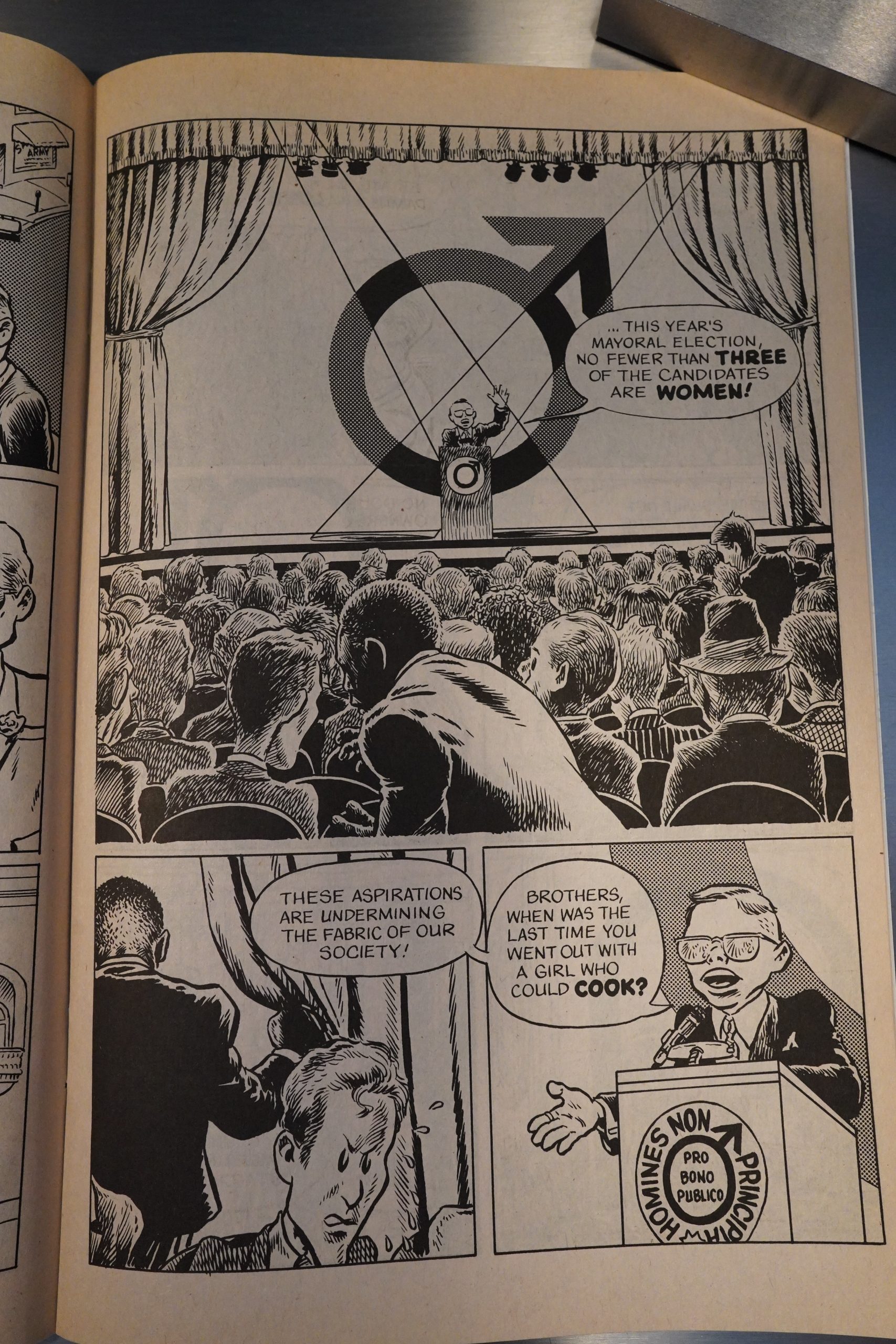 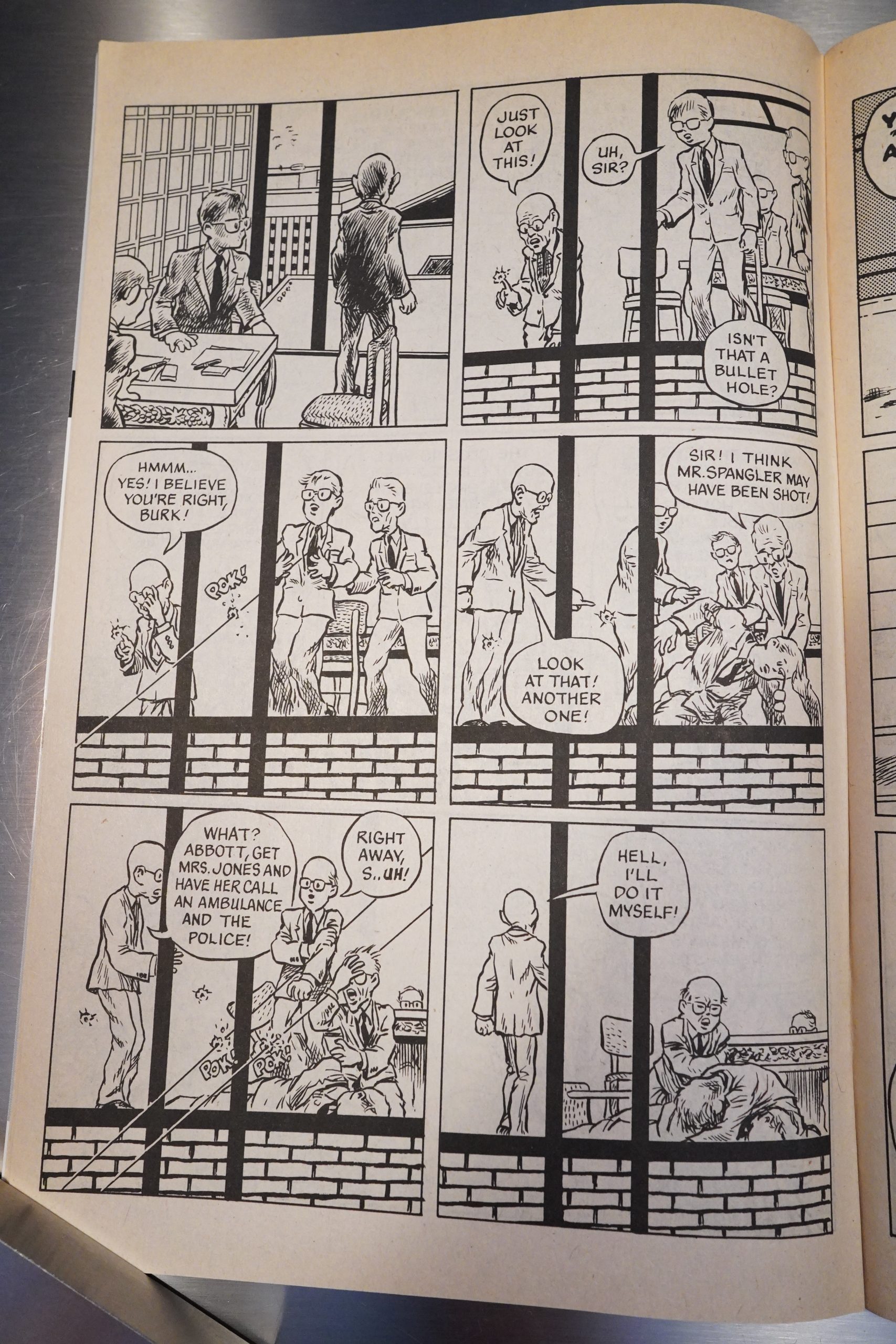 This is a pretty masterful page, though. 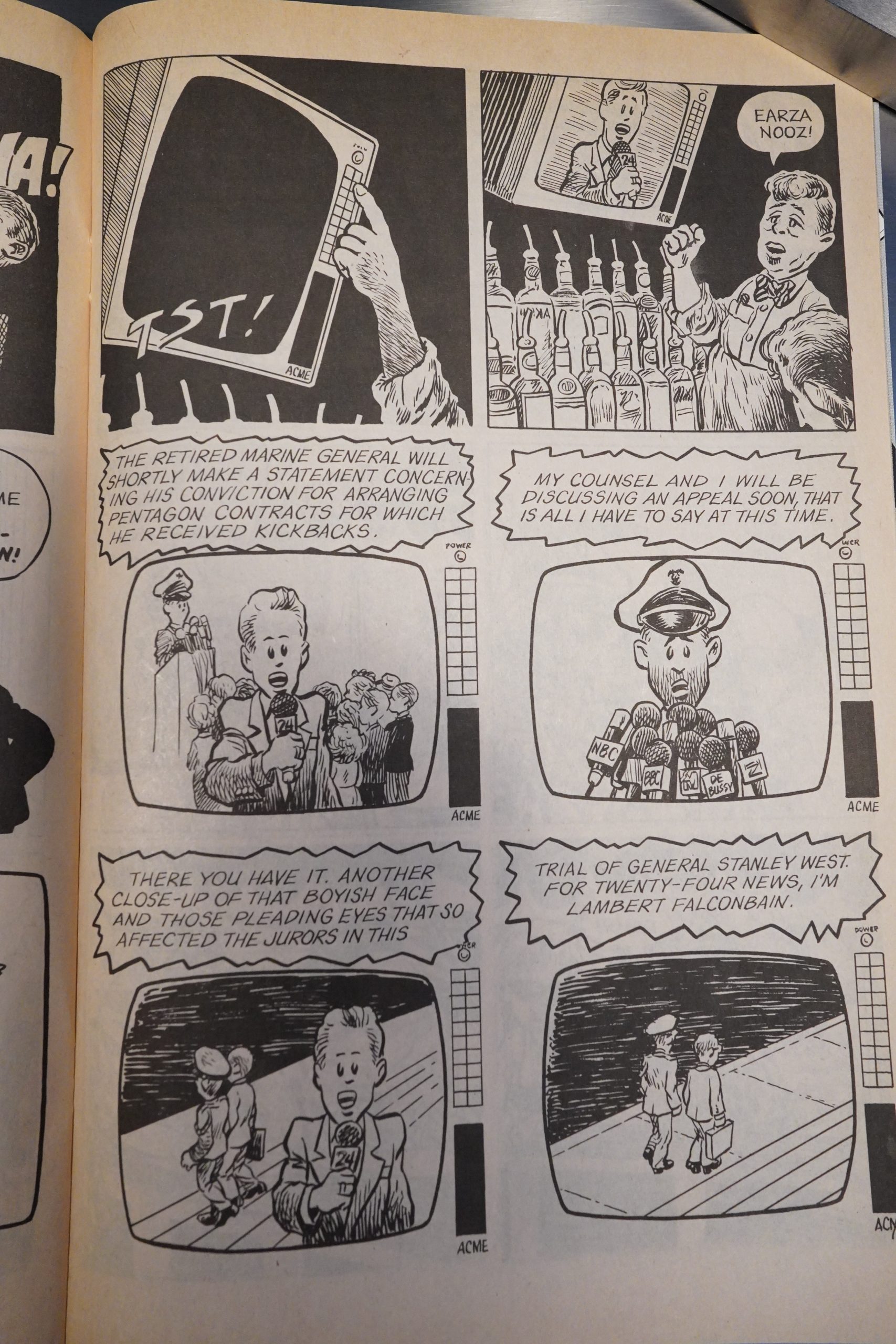 Oh yeah, this was during the Iran/Contras thing? So that’s Oliver North, I guess. 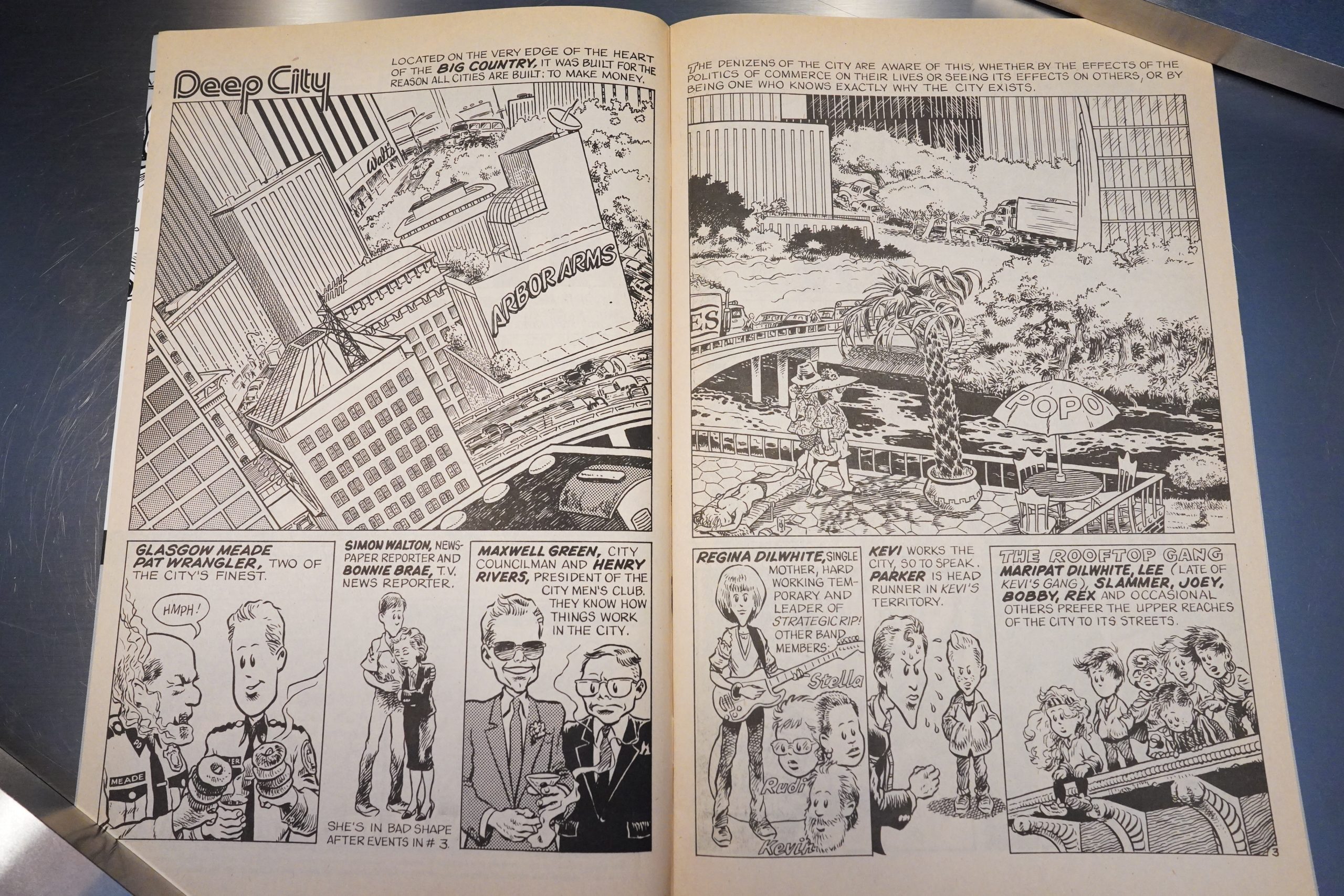 There’s a somewhat large cast of characters, and they’d all been introduced er informally over the first few issues. I’m not sure whether Potter had much of this plotted out in advance, or whether he just added pages as the whim took him, but by the fifth issue, he apparently felt the need to give us an overview.

Or rather, it feels more like he needed to remind himself what he was doing. 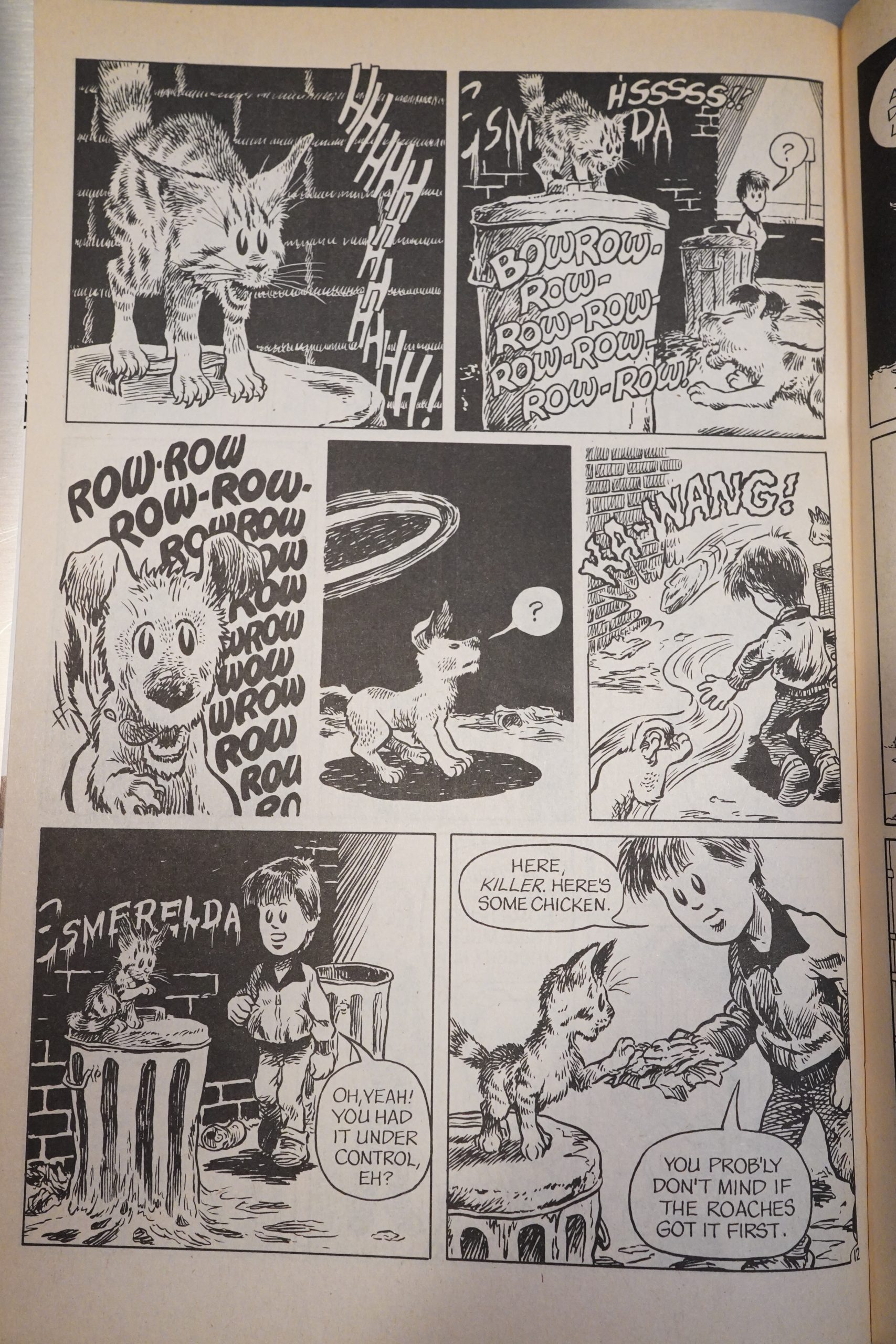 Potter is obviously a very adept artist — I mean, he can draw really nice animals and scenery and stuff. My problem is with the storytelling mostly, where I have little idea idea what’s actually going on, even after reading a page several times. So let’s just look as this as a typical example.

So we have a little cat that’s scared of a yappy dog. In the fourth panel we see a round object apparently hovering above the dog? But it’s unclear from which direction we’re looking. In the fifth panel, we’ve apparently done an 180 from the second panel, at least, and a round object has is hitting the opposite wall. The posture of the guy seems to indicate that he’s… weak in the knees?

Oh right! It’s supposed to be him throwing the garbage can lid at the wall, and not the cat levitating the lid because it has super-natural powers. (There’s people in the book that can fly and teleport, so that wouldn’t be out of the question, after all.)

Half the pages in the book are like this, where a simple sequence of events takes a lot of work to parse, and it’s not just because Potter’s bad at human movement and posture, but also because anything could be happening.

It makes for very distanced reading.

Unusually for a series like this, the cancellation is actually announced in the final issue… 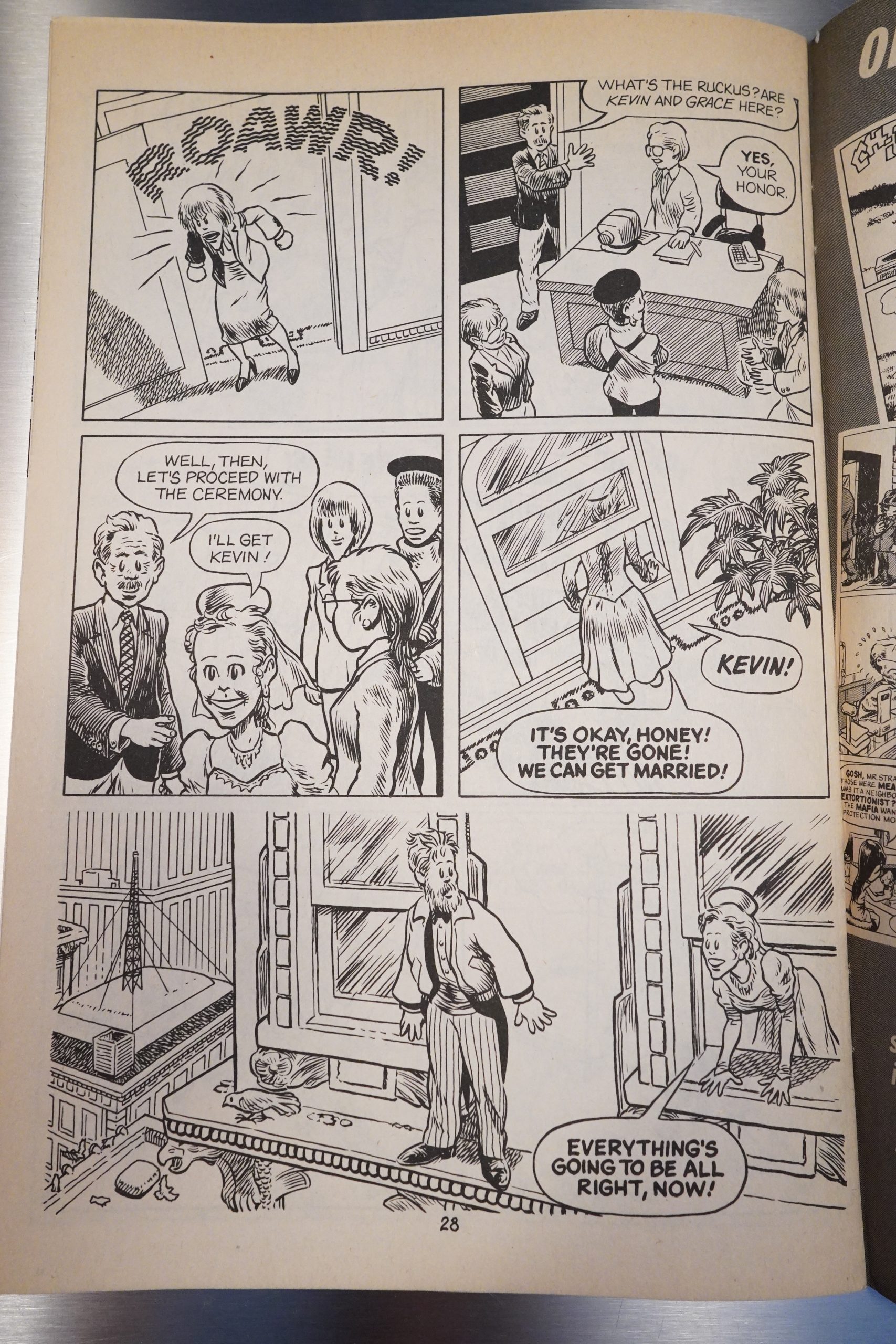 … but as usual, nothing much is resolved.

The book has a dozen different plot threads, so resolving any of them in one issue would have been hard, so perhaps just ending it like this is the only logical choice. But unsurprisingly, nobody has published a collected edition of this — because you have to have at least a nominal ending to do that.

OK, typing this I feel like I’m more critical than I was when I read it. It’s a loopy comic book, but there’s scenes that are really good, and there’s some funny bits that work. It’s an entertaining read.

Doug R)tter should put his name more
prominently on his Denizens of
Deep City” opens as if leaning out a
third-floor window over San Fran-
cisco-hilly city streets where in four
more panels we see and are told of
Sally Manders, and her brood, down
below on the sidewalk Late one even-
ing; Sally turns, and eats her young;
we are told there are no witnesses.
End of page one.
Page 2 begins story 2, of accountant
Jamie Hooter who comes home to find
his television stolen, and no other tele-
vision usable in his hard-found apart-
ment, and—a ransom note: If you
want to see your TV again in one
piece, leave $200 in small bills.. ..
The telly-nappers are serious: in a
gruesome touch, they’ve sent Hooter
a dial severed from his set.

Denizens might be a Gary Larson
story, where 96% of it is simple, real-
life true; but that other four % is more
outrageous than Zaphod Beeblebrox.
Be warned: in the face of the hei-
nous, unforgivable act of television
theft, many other unpleasant things,
including the sudden, shocking death
by shooting of an innocent, are right-
fully humored over.

In a vignette for an upcoming Denizens of
Deep City, a man sees the woman of his
dreams in another car. The sight drives his
fantasies—no doubt of pistons firing, stick
shifts and engine torque—until the woman
puts a finger up her nose.
Welcome to rush hour romance in Deep
City, a place where the best laid plans of
mice and men meet the Twilight Zone.
The series enters its second year with #7,
and creator Doug Potter says that Kevin
O’Sullivan, the rooftop gang, and Sy Rivers
all feature prominently in stories this year.
O’Sullivan, the drummer for Strategic Rip
who died [temporarily) in issue #4, is dis-
tuibed to find his groupie-dominated life torn
asunder by man’s most terrible ailment: bve.
“It’s not something that makes him very
happy,” Potter says. In #8 he gets married,
I think, or jumps off a building.” The issue’s
cover has Glin standing on a building ledge
as his bride-to-be offers him his coat
it’s a cold February day.
The rooftop gang has been brought down
to Earth by Juvenile Court, which sends
them back to school. “If people thought
things were hairy on the rooftops, things in
school aren’t a picnic,” says Potter, who likes
this story turn because it allows him to
explore themes that he first charted in Chips
and Vanilla, a Kitchen Sink one-shot comic
book about the terrors of childhood. “l
wanted to go back after Chips and Vanilla—
do stuff that didn’t fit there.”
By exploring the terrors of Sy Rivers, Potter
illustrates how peripheral characters
suddenly take center stage. “With the events
in #7 he starts to develop a paranoia,” Potter
says. “The kind that might happen to a single
person living alone if they think too much
about things.” For Sy, this translates into
worry about always being where there is
someone to perform the Heimlich Maneuver
on him. “He starts to develop a phobia of
choking to death.’.’
Potter says he’d like to increase the ambi-
guity of the book, to bring a more surreal
quality to the stories. “l really don’t like to be
blatant,” he says, happy that readers are
reading things into some of the gray areas
he intentionally creates. “l realty am gratified
that people are taking it the way they are. I
don’t want to explain everything that
happens.”

This is the one hundred and sixth post in the Entire Kitchen Sink blog series.