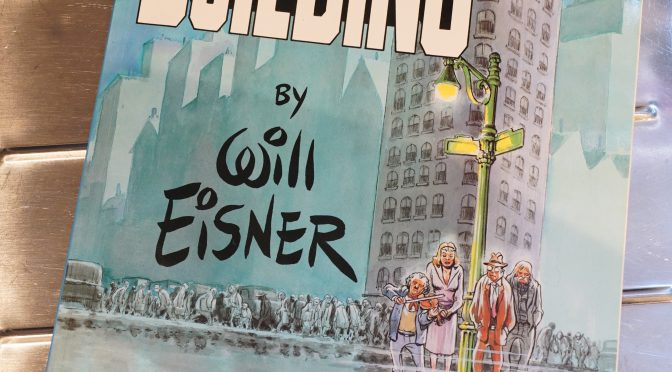 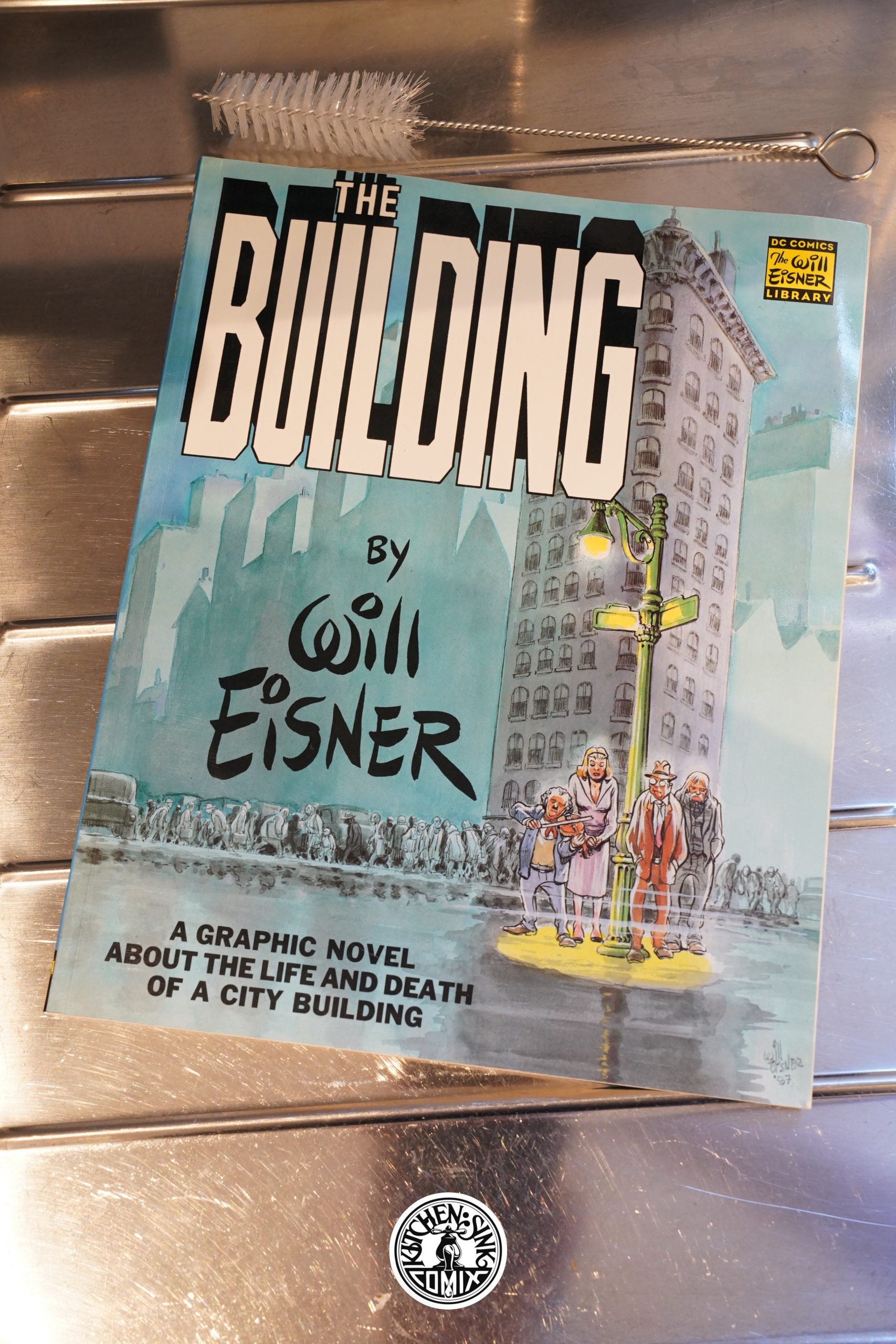 Oops. I’ve got the DC version of this instead of the Kitchen Press version… I think the Kitchen version was in the same format — European album format sized — but I’m not sure. 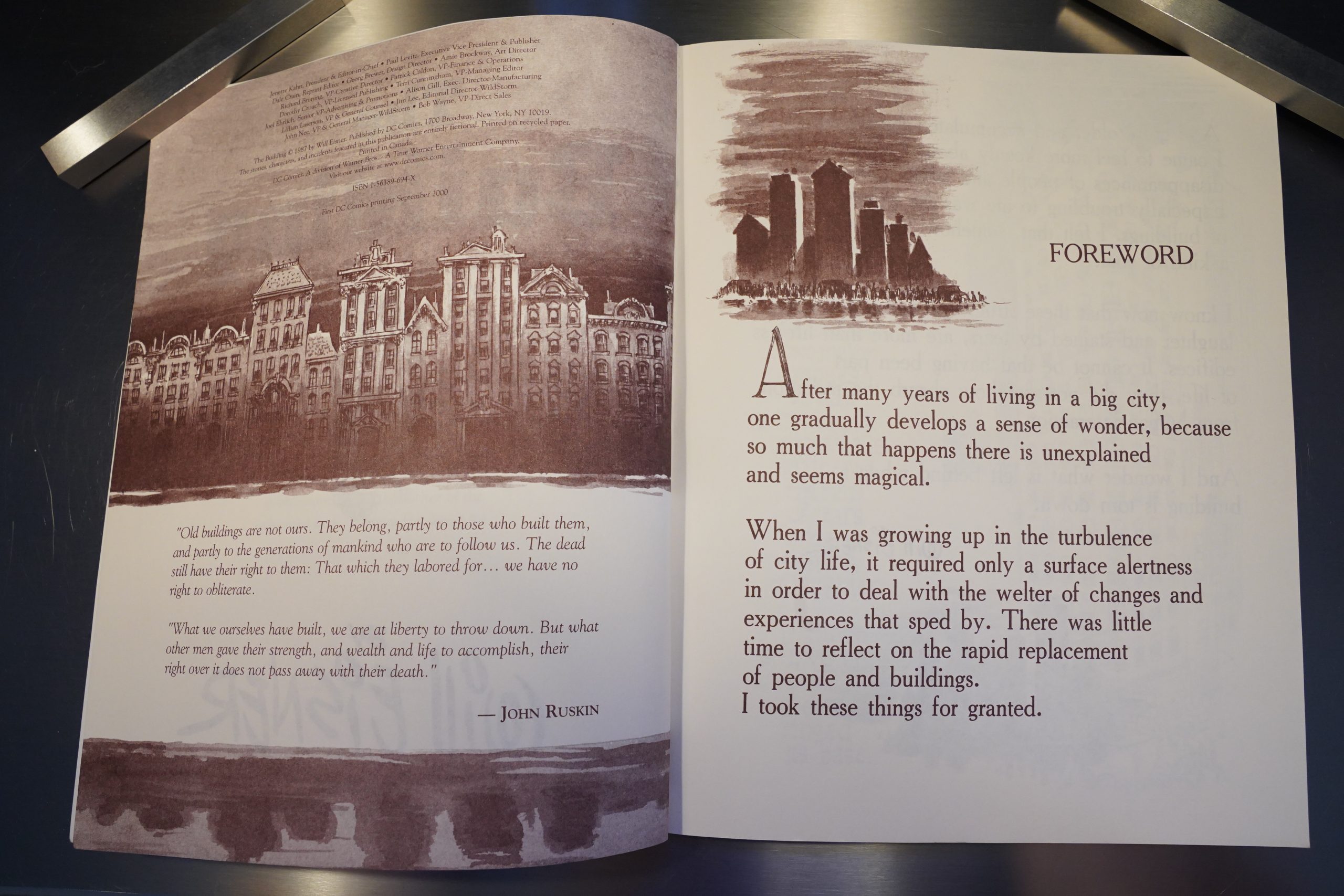 The text size on the foreword might point towards this being meant to be published in a smaller format. 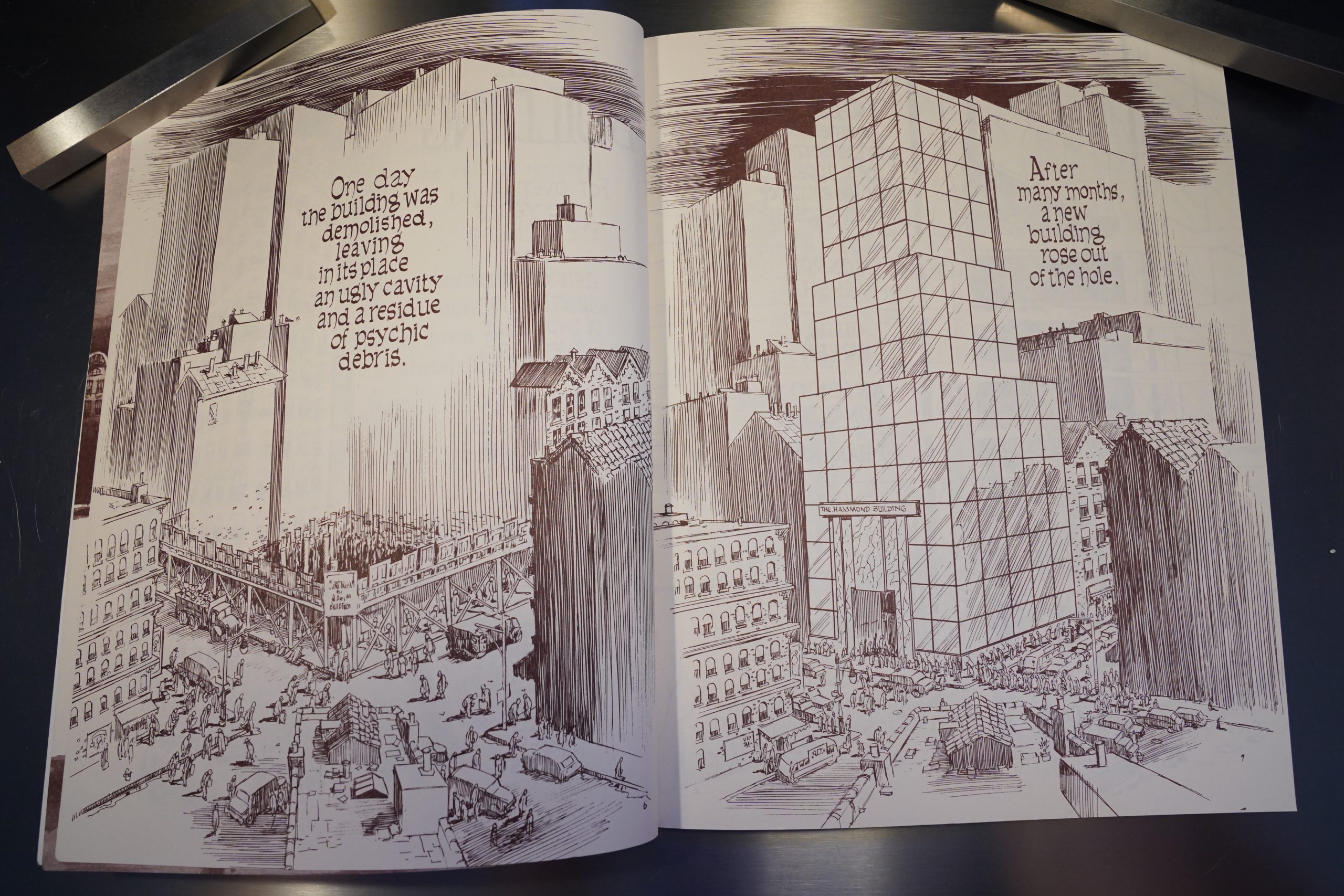 Anyway, this is another one of those Eisner books that’s centred on a specific place, and then he tells a number of vignettes about people with some connection to that place. 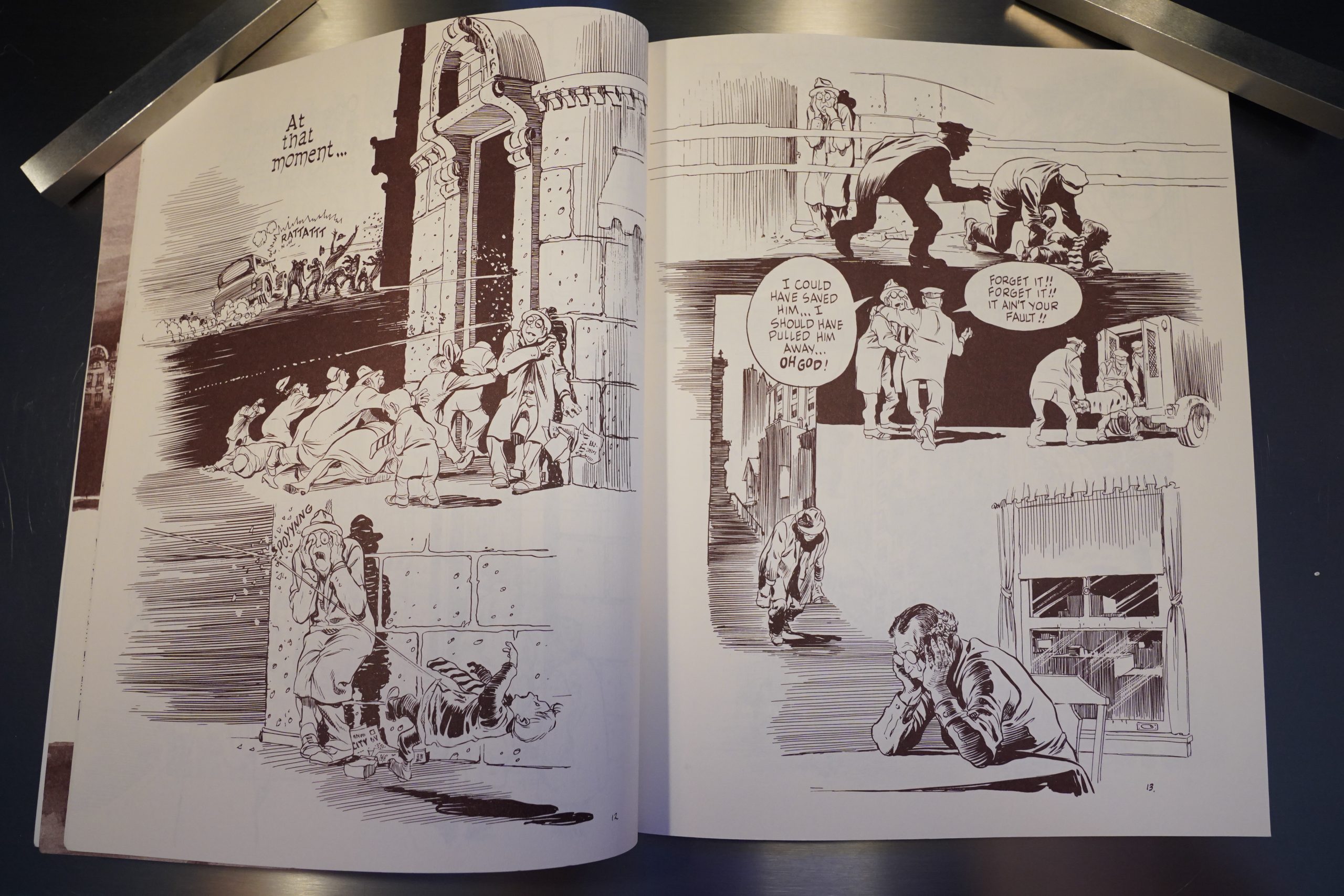 This one has four of these vignettes (and a coda), and it’s basically what you’d expect: Hapless people who have bad things happen to them. 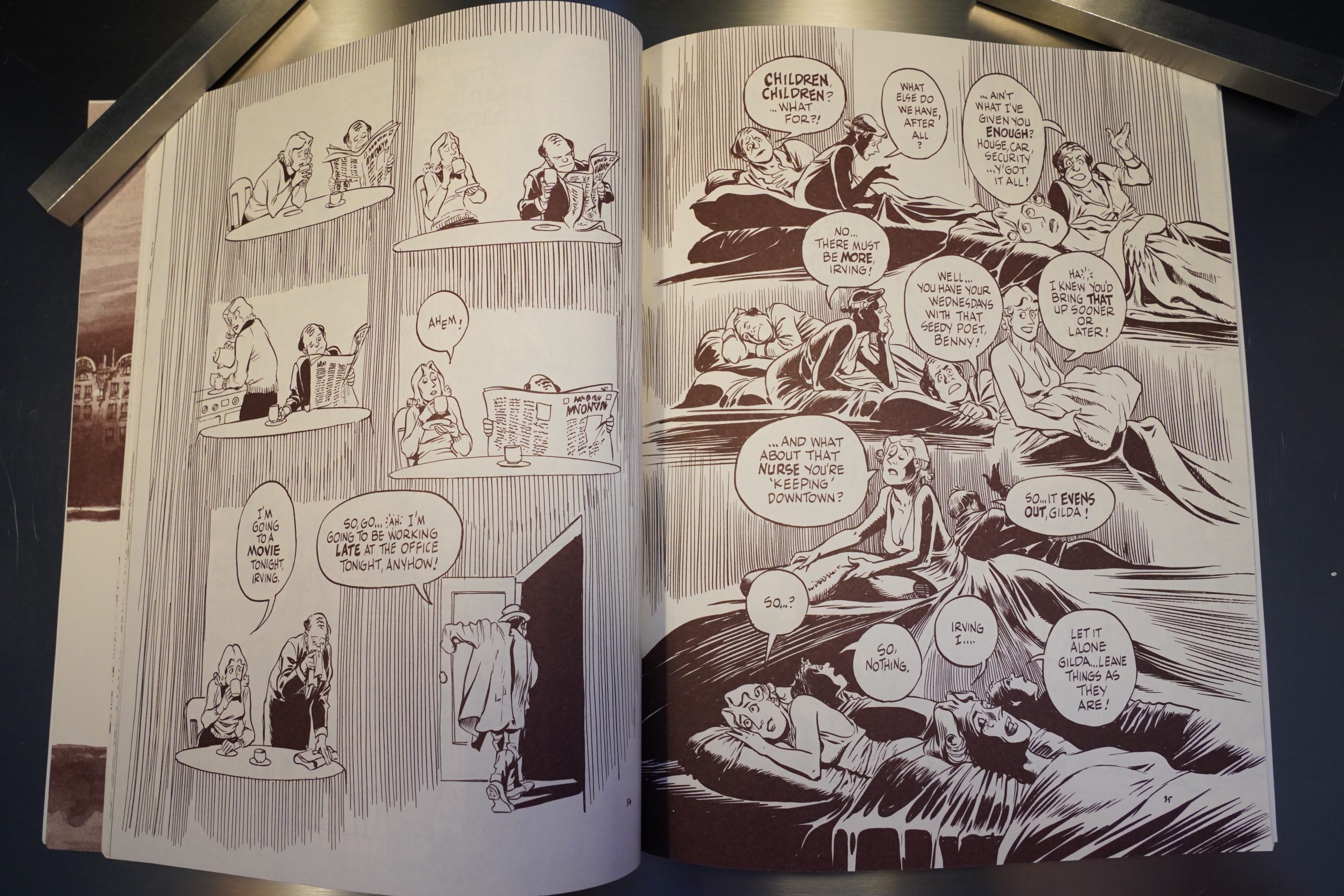 I do think that this is step up from things like New York the Big City, though — the characters have a bit more character? 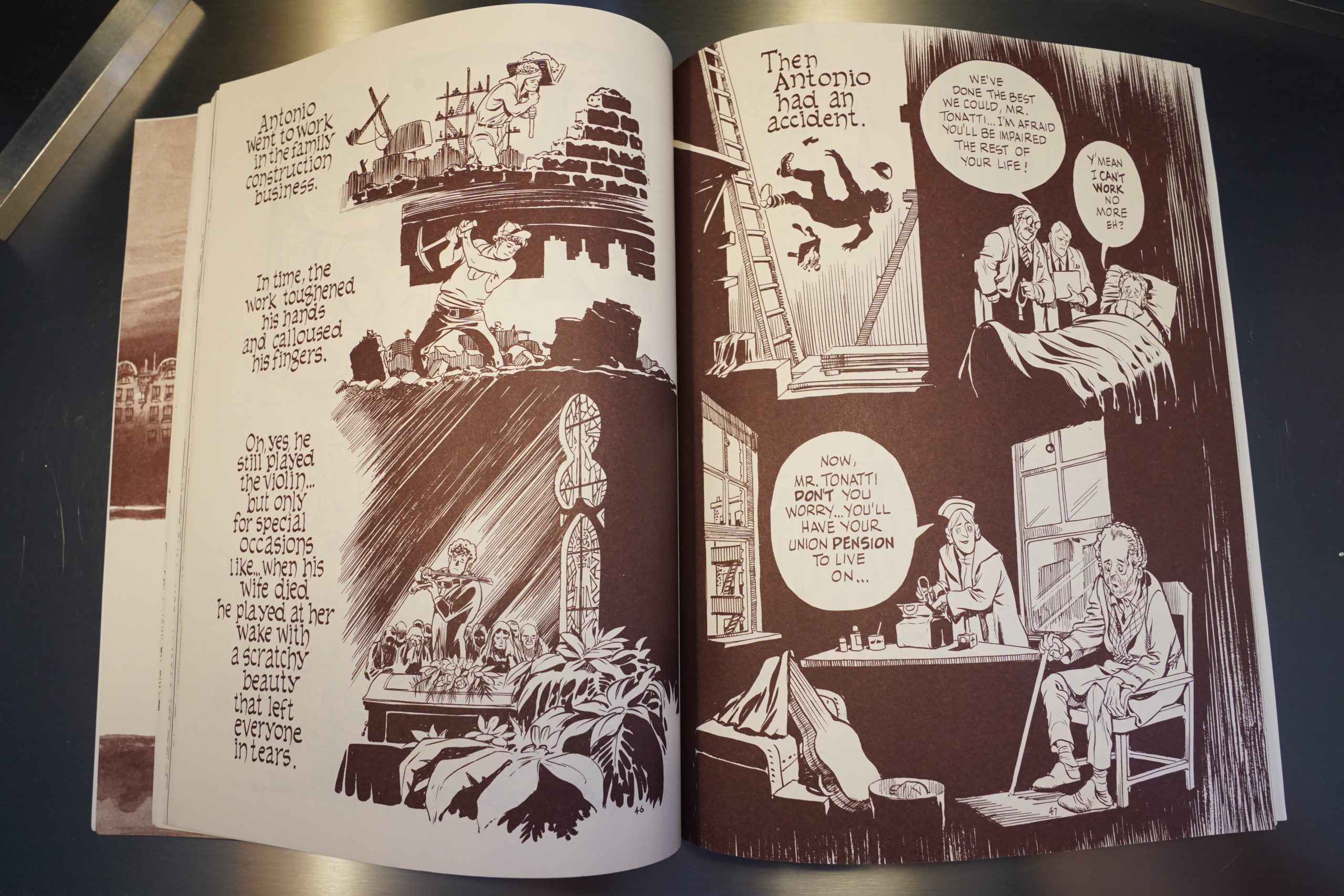 But… this time it works: The vignettes intersect in interesting ways, and then (in the coda) we get a real, huge, squishy sentimental pay-off, and it’s amazing. It’s so schmaltzy that even the most shameless 30s Hollywood tear jerker wouldn’t have gotten away with it, but I found myself squeezing out a few tears as if on command.

It’s a very quick-paced, economical read, too. It’s like a focus group optimised version of his previous “graphic novels”, and I can’t help loving it.

There are so many painfully obvious defects
with this story that it’s difficult to know where
to start. There is the ending where the four
characters’ lives converge into incoherence. It’s
hard to even speculate as to what point is being
made here.

I realize that the ending could be seen as a
redemptive triumph of human courage, but such
an interpretation is unearned. The characters
would have to be flesh-and-blood creations
rather than the stereotypes of the middle-class
imagination that they are. None of the characters
are particularized sufficiently for the ending.
however confused it’s realized, to give order or
meaning to their lives. The character sketches
that build to the climax are functional abstrac-
lions that work on a crude cause-and-effect level.
The four character sketches are a set-up for the
big pay-off. These characters’ lives serve such
a transparently calculated literary purpose that
the reader can practically hear them whispering
between panels, “Take us seriously, we’re literary
just as we can almost hear
Eisner at the end of the story echo his characters,
/ •See? I told you it was literary.
The elements of Eisner’s Spirit that were
acceptable in that context have become an
Obstacle to the serious aims in Eisner’s more
“mature” work. The sentimentality that
• •humanized” the Spirit stories was offset by the
humor: in Eisner’s new work there is no room
for humor. only sentimentality. When all this
Hollywood schmaltziness is placed in a serious,
indeed stridently “literary” endeavor, it mere-
ly becomes obnoxious.

I totally agree with Gary Groth.

More than once Groth attacks Eisner’s
characters as “losers, ” as if this were some fail-
ing of Eisner’s. But the characters are obviously
supposed to be losers, and they are sad and
ridiculous and interesting as such. Groth harps
on the fact that the book’s back-cover blurb calls
The Building an “affirmation of life” represent-
ing “the best human qualities, ” then attacks the
material inside because its characters are
“ruthless,” “pathetic,” “stupid,” ‘
if it were Eisner’s artistic obligation to live up
to the blurb on the back cover (which surely
wasn’t written until long after the completion
Of the book). One can criticize Kitchen Sink
Press for portraying the book too rosily on the
cover, but one cannot justly criticize Eisner for
failing to do what he wasn’t trying to do.
Groth also criticizes Eisner for not “par-
ticularizing” his characters, for his use Of
“cyphers” and i ‘one-dimensional” people.
Again, he is not allowing Eisner to be what he
is. Eisner is a cartoonist. not just in choice Of
medium but in approach. He reduces people to
caricatures, purposely departicularizes them, in
order to play with the types, the predetermined
roles, that so many Of us find ourselves living
Eisner is as much a social satirist, albeit a very
gentle and affectionate satirist, as he is a novelist.
Hence his purposeful use Of unreal, cartoonily
evocative names. After mentioning the character
Irving Glumpen Groth notes snidely, “couldn’t
someone be hired to write characters’ names for
Eisner?’ ‘ Groth seems to be assuming that Eisner
wants us to accept such names as likely for real
people, which is clearly not the case. Many of
Eisner’s names spring from puns and from
Yiddish-American dialect. “Glumpen” is
reminiscent of lumpen, which suggests
something boring and worthless. Monroe
Mensh, the guilt-ridden and unsuccessful helper
of children, takes his name from the Yiddish
mensch, meaning someone who is selfless and
generous to a saintly, even excessive, degree.
Gilda Green is obvious: She’s “gilt,” the golden
girl, in her youth, but she’s really only imita-
tion gold and turns to green with age.
These aren’t brilliant puns, but they do their
job: They let us know that these characters are
more types than individuals, that they represent
rather than exist, that they are there to play out
roles in a sad social comedy. To use characters
in this way is not bad art. But to denounce them
for being what they are is certainly bad criticism.

The temptation is to let Jules Feiffer’s defense
of his old mentor [“Memories of a Pro Bono Car-
toonist,” Journal #1241 stand as the last word in
the recent controversy over WIII Eisner. However,
there are still some loose ends that require
clarification.
l. Sacred Cows. Despite my argument with
most of what Gary Groth wrote [“WIII Eisner:
A Second Opinion,” Journal #1191, I want to ap-
plaud his intention. Those who praise Eisner
without thought do him a greater disservice than
Groth does. “Canonization” — the drawing up
of a list of what is best in art, what deserves to
survive — is an important function of criticism.
The completist fetish of collectors has so fir pre-
vented canonization from happening in comics
(although Mike Barrier has bravely tried to dis-
tinguish great Barks from merely good Barks).
Kitchen Sink’s publication of all the post-war
Spirit stories is necessary for historians and cult-
ists, but what we really need is a collection of
the best, the essential Eisner. Groth’s essay is
a strong start in helping to define just what the
essential Eisner is. In particular, his criticism of
The Building, a book as bad as Groth describes
it, should be commended. My only quarrel with
this section Of the review is the tone in which
it is written.

The original Kitchen Sink edition was printed at European album size on sepia paper, and the simulation of age acts as an evocative companion to the story.

There’s not that many reviews of the book out there:

This is great stuff, pictures and words working together to tell a story that would not work without either. The long-story format allows for many single-panel pages focused on the tall buildings that are the setting, but also multiple-panel pages showing changes over time.

This is the ninety-third post in the Entire Kitchen Sink blog series.