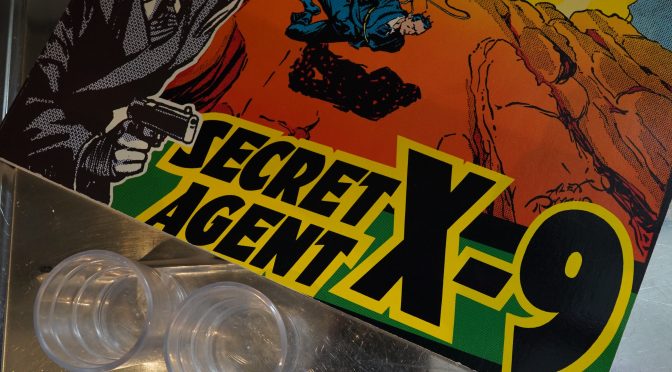 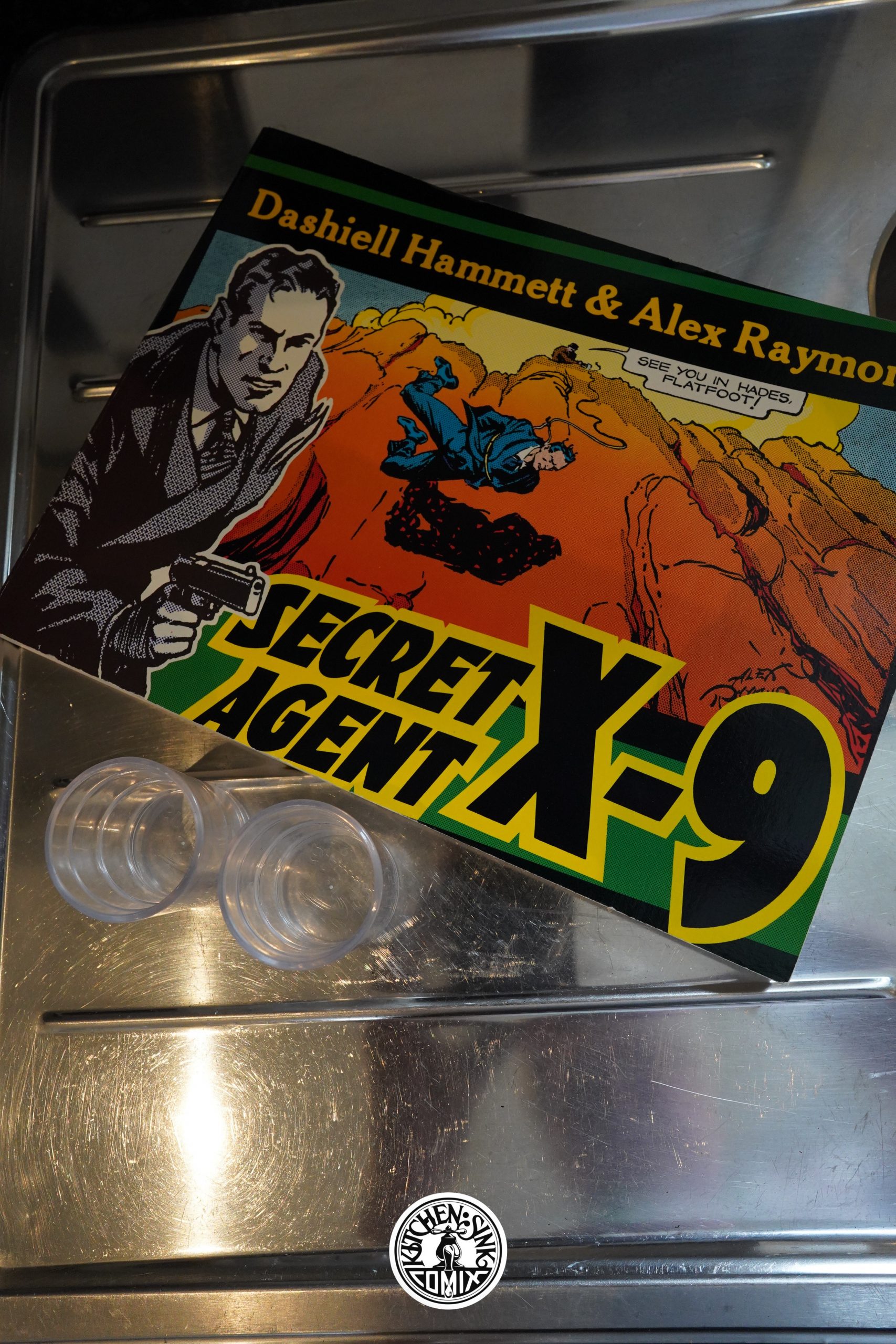 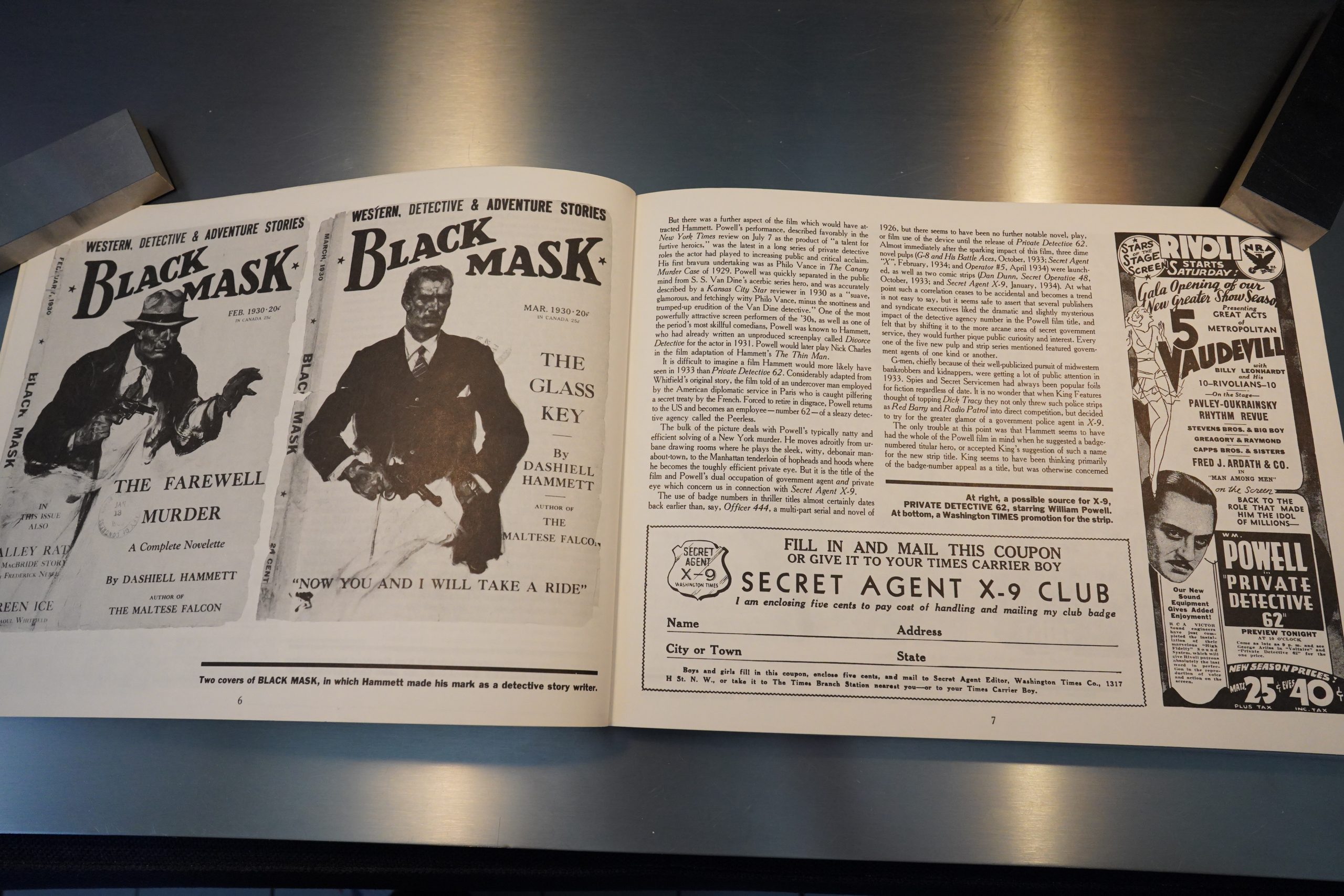 Bill Blackbeard provides an extensive introduction to this collection (which collects all the Hammett/Raymond X-9 strips). 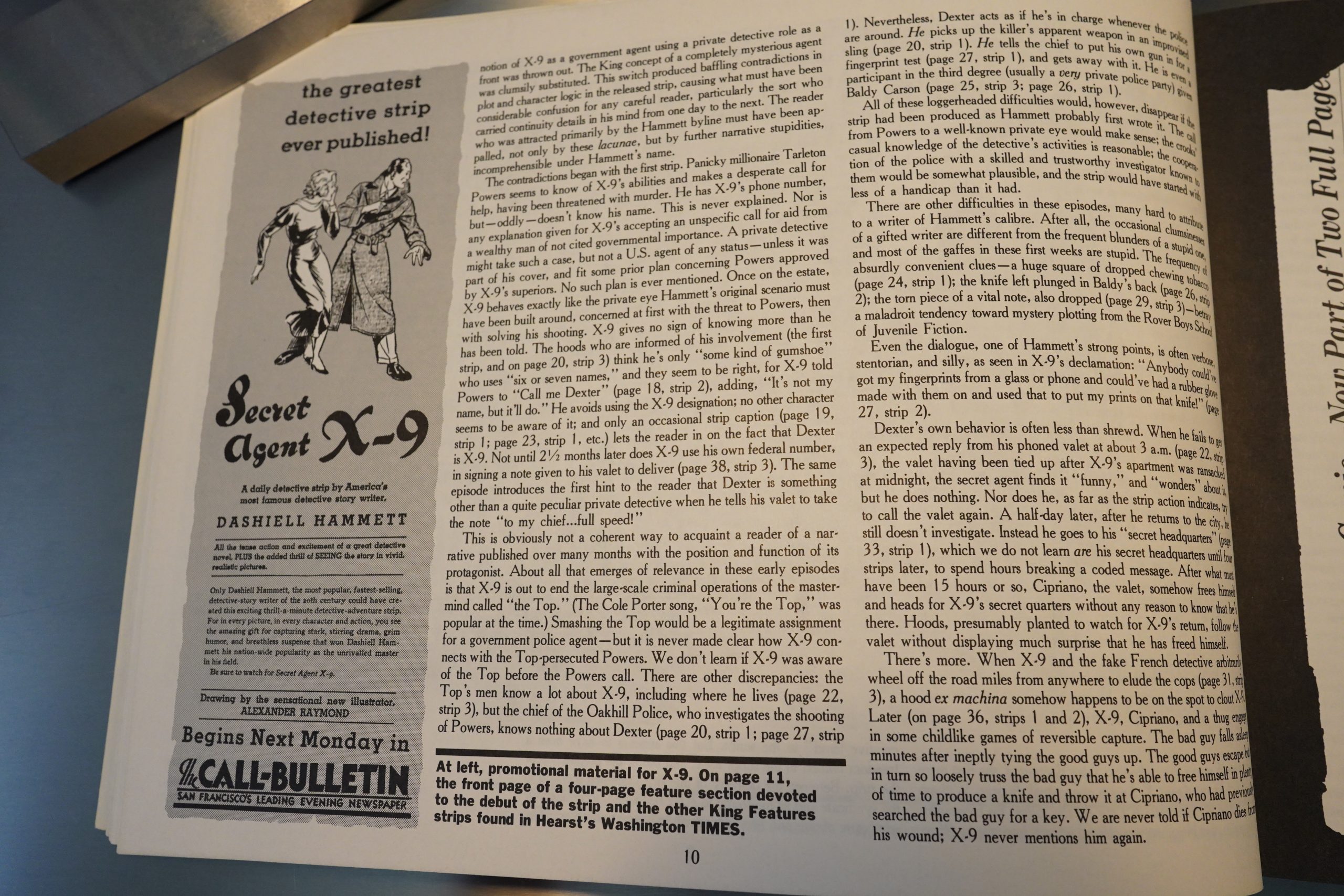 Introductions to strip collections are usually hagiographies, but Blackbeard spends a lot of time talking about just how horrible and awful the start of the strip is. He opines that Hammett couldn’t possibly be that bad a writer, so he conjures up script meddling from the syndicate, without any proof — or, as far as I can see, any other reasoning beyond “well, it sucks! So it can’t be Hammett!”. 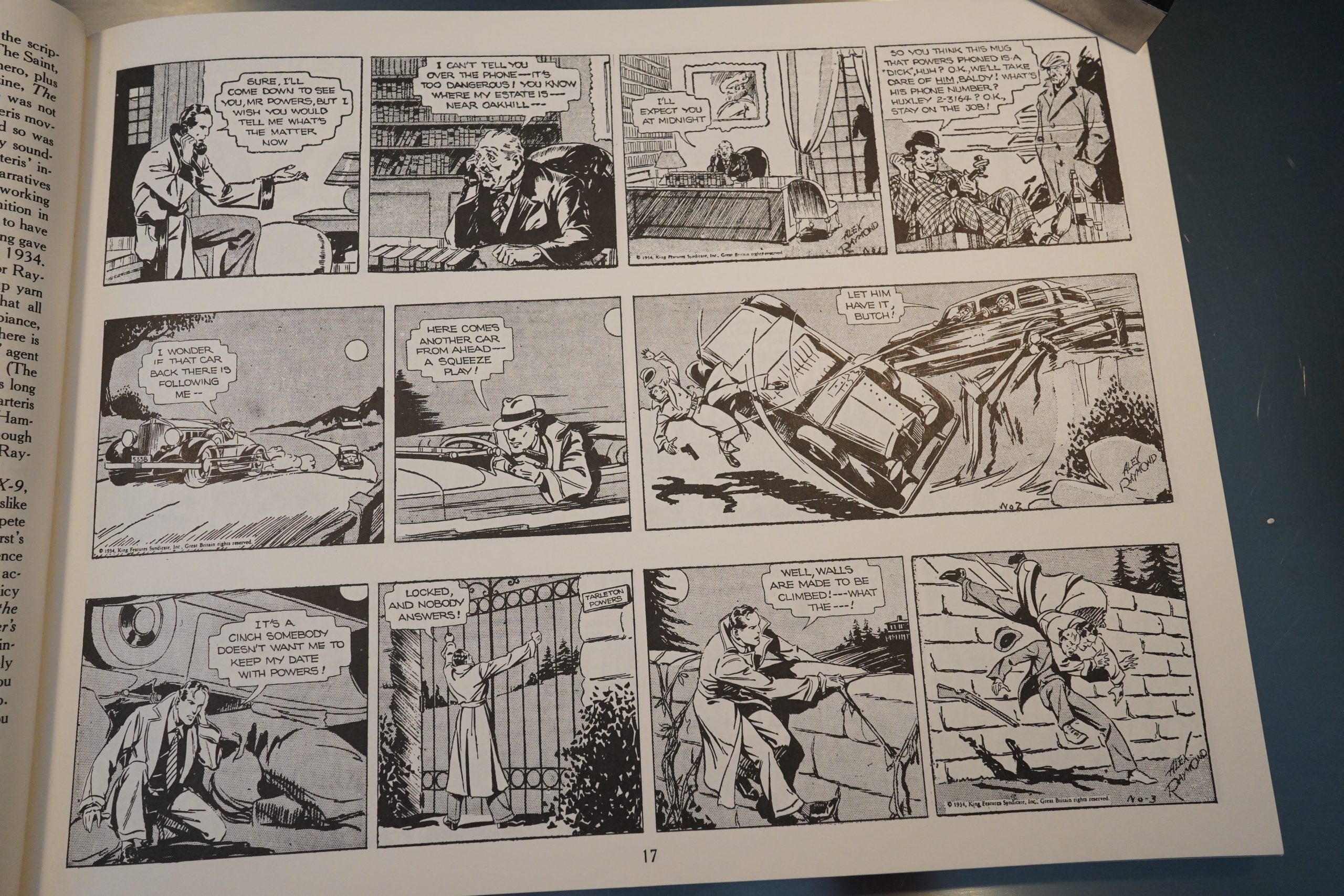 So this is the supposedly incoherent start of the strip, and it reads quite well to me? Dropping us straight into the action without any tedious exposition seeems like a good idea to me. 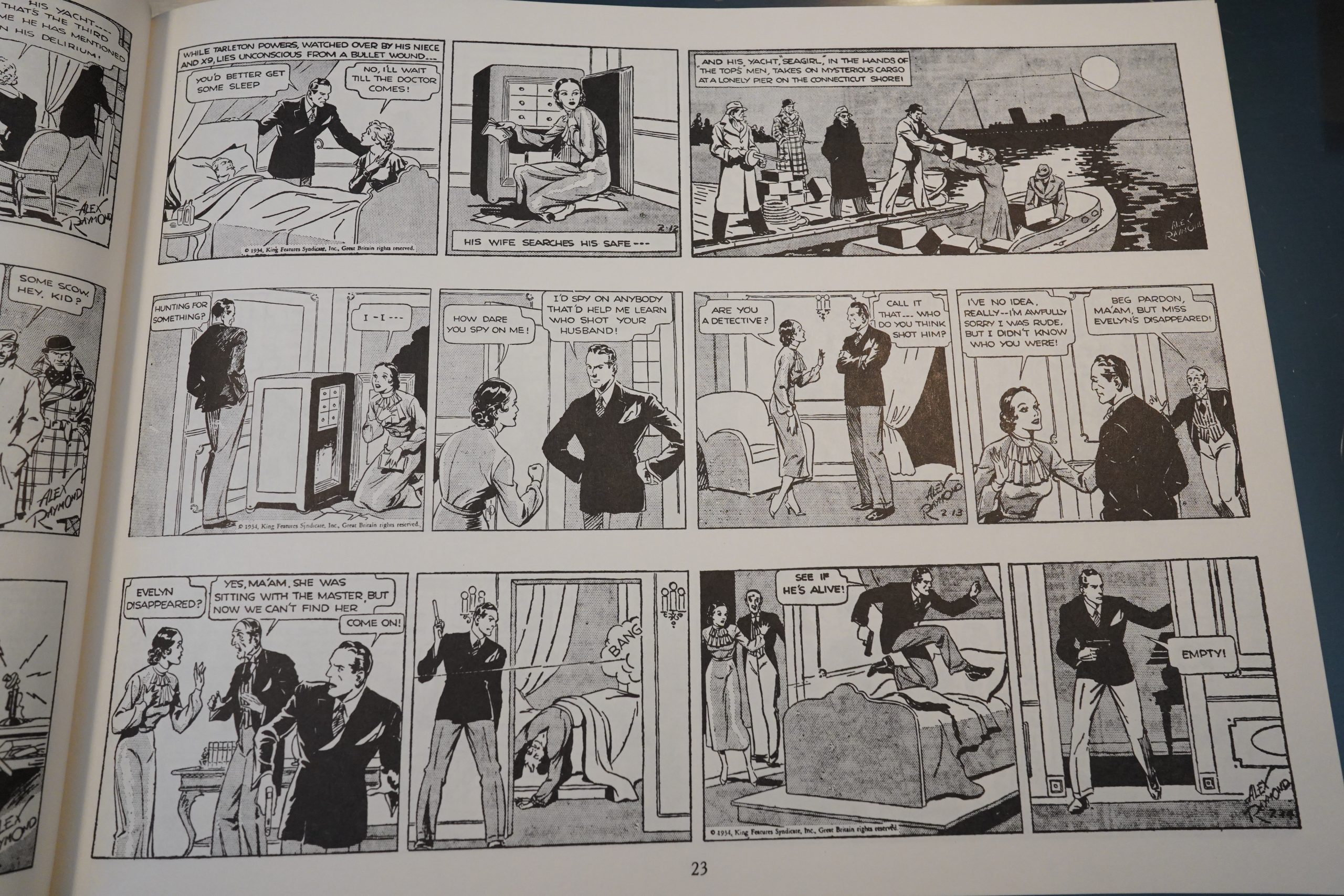 That said, Blackbeard is right — this isn’t particularly good. It seems on par with most action strips of the area, though. Blackbeard says that one of the signs is the over-writing, and… it’s pretty action packed? 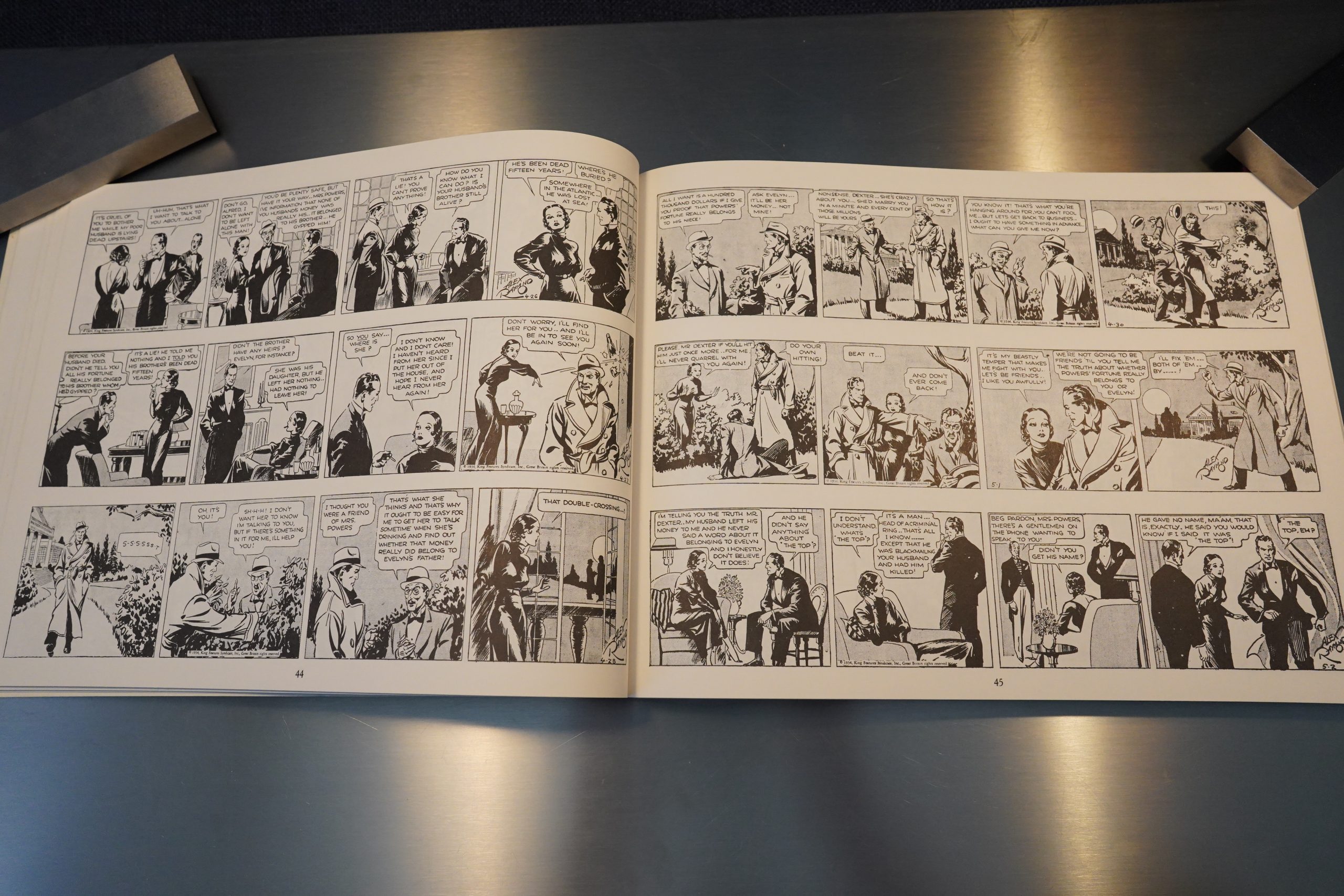 Blackbeard posits that the syndicate meddling stops on page 43, so the rest is supposed to be the best comic strip ever, and… I don’t see that much difference, except that the wordiness goes up.

But I mean, the strip is OK? Fluid storytelling throughout; many reprint collections feel repetetive, because there’s a tendency to recap all the time for casual readers. But it’s hard to be enthusiastic about this stuff. 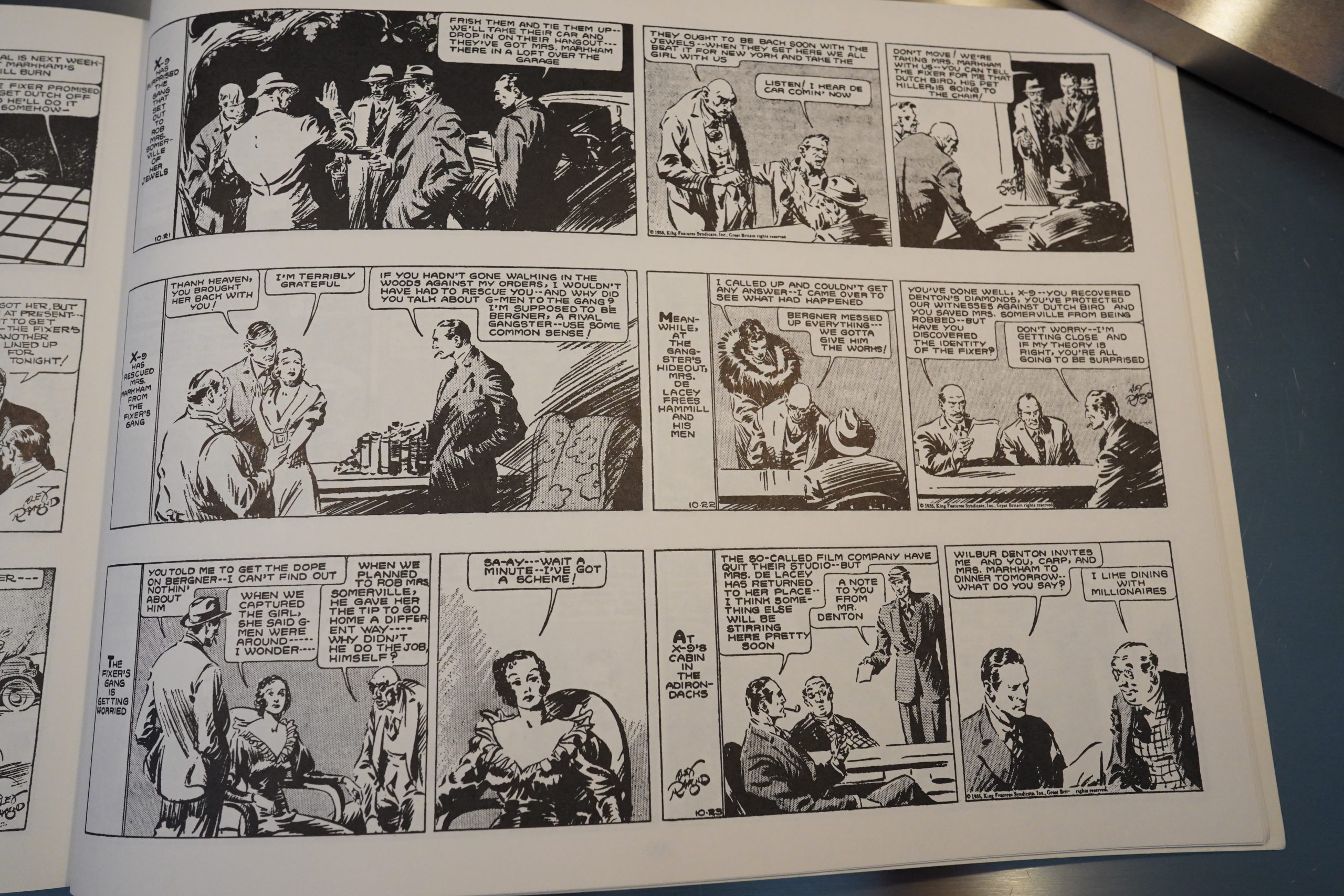 And that starts happening towards the end of the run, and the reading experience becomes somewhat staccato.

Despite Raymond’s skill as an illustrator,
his use of the comic strip medium was un-
v distinguished. His strips lack the variety of
panel composition—scuh things as varying
camera angles and distances—that would
lend visual drama to the story. Compared,
såy, to Milton Caniffs work on Terry and
the Pirates a short time later, much of Ray-
mond’s stint on X-9 seems a monotonous
parade of panels in which the characters
appear always the same size, always seen
from the same angle.
Moreover, Raymond’s people never
change expression: X-9’s grim albeit hand-
some visage seems carved in stone, and his
facial expression is repeated on the head of
every male character in the strip.
mond’s women, although -superbly drawn
and engagingly beautiful, all look alike,
and when he makes both young women in
a story dark-haried, we can’t tell one from
the other—with much resulting confusion
about the story’s plot (particularly after
Hammett had left).

This is a true find!
Dashiell Hammett is one of Amer-
ica’s most revered mystery writers. His
novels The Thin Man and The Maltese
Falcon are literary classics as well as
classic mysteries. Now Kitchen Sink
Press has published the complete
collection of Hammett’s Secret Agent
X-9 comic strips, illustrated by the
then up-and-coming young artist Alex
Raymond.
As one might expect from the artist
of Flash Gordon and Jungle Jim, X-9
is elegantly yet simply laid out. Every
figure is simple but powerful, every
scene contains only what it needs to
make it work.
As for the writing… If you are one
of those people who don’t read intro-
ductions, you may find it hard to
believe that Dashiell Hammett wrote
the first third of these strips. nere are
a number of inconsistencies and plot
holes that will undoubtedly give one
pause. Bill Blackbeard’s introduction
suggests that Hammett was heavily
edited by the syndicate. He goes into
great detail to explain how and why
this might have happened. The last
third of the first story is of much
higher quality, suggesting that Ham-
mett was being left to his devices.
The pacing is brisk and the art reflects
the writer’s zest.
The second tale, set in a sort of neo-
wild west setting, is pretty much the
best written and least edited of the
three sequences included. Whem
Hammett left the strip he was in the
middle ofa story that was finished by
Leslie Charteris (of The Saint fame).
Although there was no major drop in
the strip’s quality, there is a noticeable
loss of enthusiasm in this story.
Overall, even with the flawed edit-
ing and the writing change, Kitchen
Sink has put together an entertaining
package.
Even with the meddling of King
Features Syndicate, Secret Agent X-9
remains one of the best (and best
loved) comic strips of the ’30s and
’40s. And the Hammett written stories
are among the best X-9 adventures.

This is the one hundred and eighteenth post in the Entire Kitchen Sink blog series.