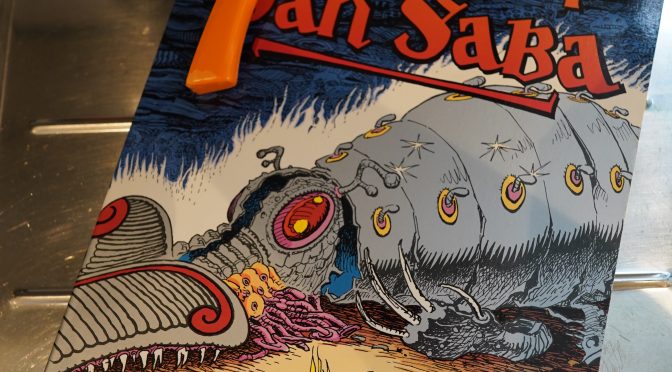 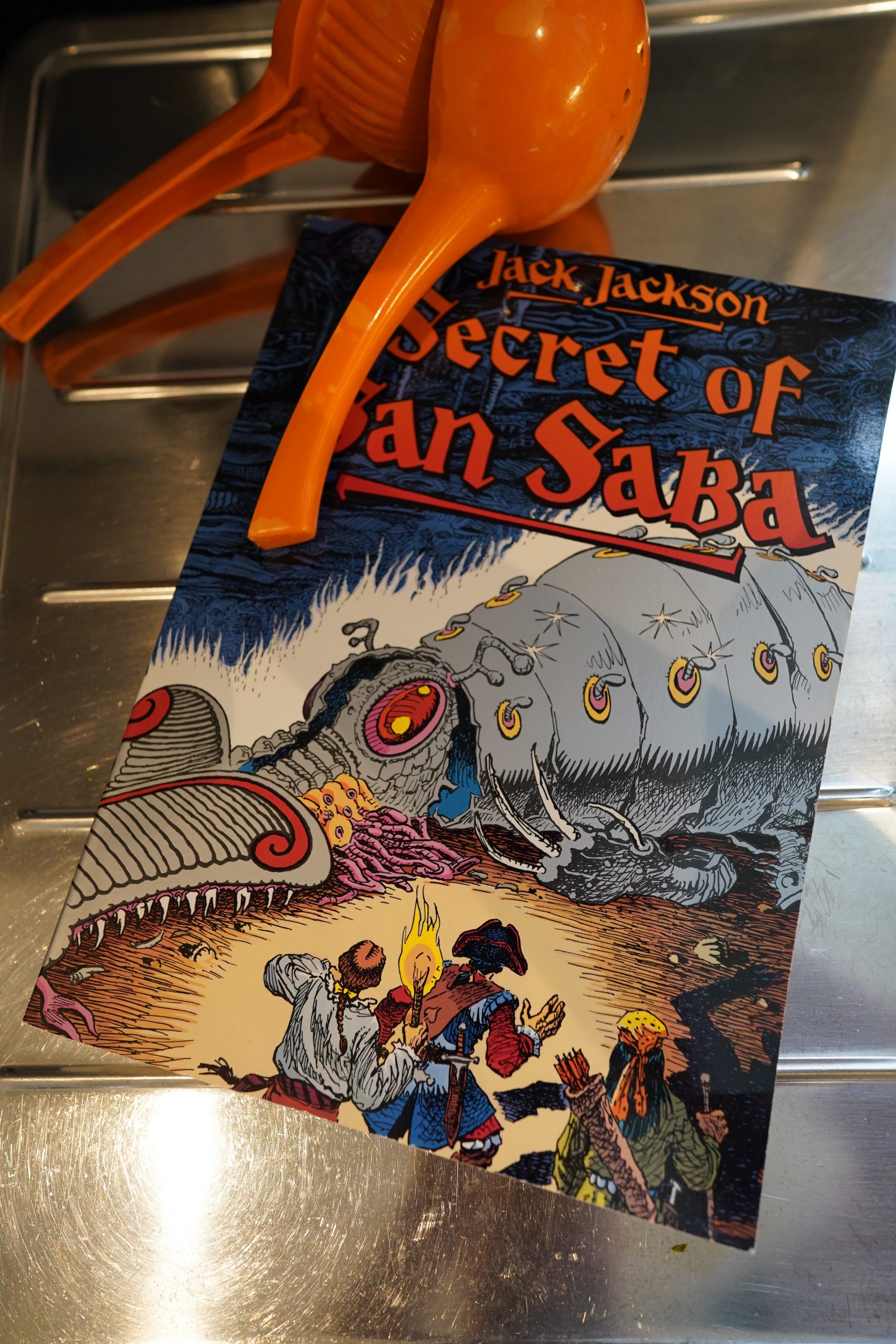 This book was originally serialised in Death Rattle, and I read it a couple of months back, so I’m not re-reading it now for this blog post. Let’s just take a quick look…

The cover’s very nice — Bulto (the slug monster is printed with silver metallic ink, which is very appropriate, because it’s a story that involves a lot of silver). 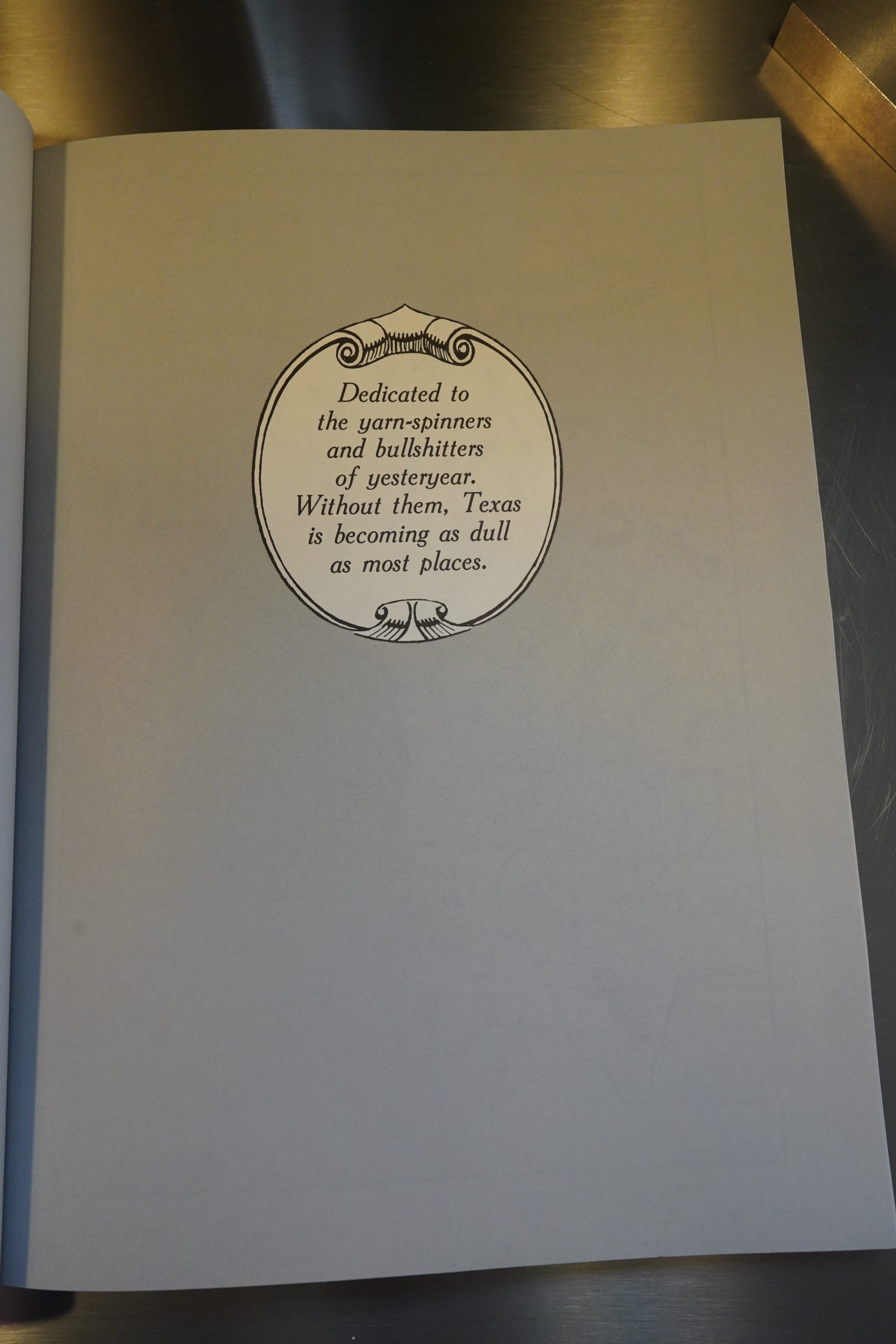 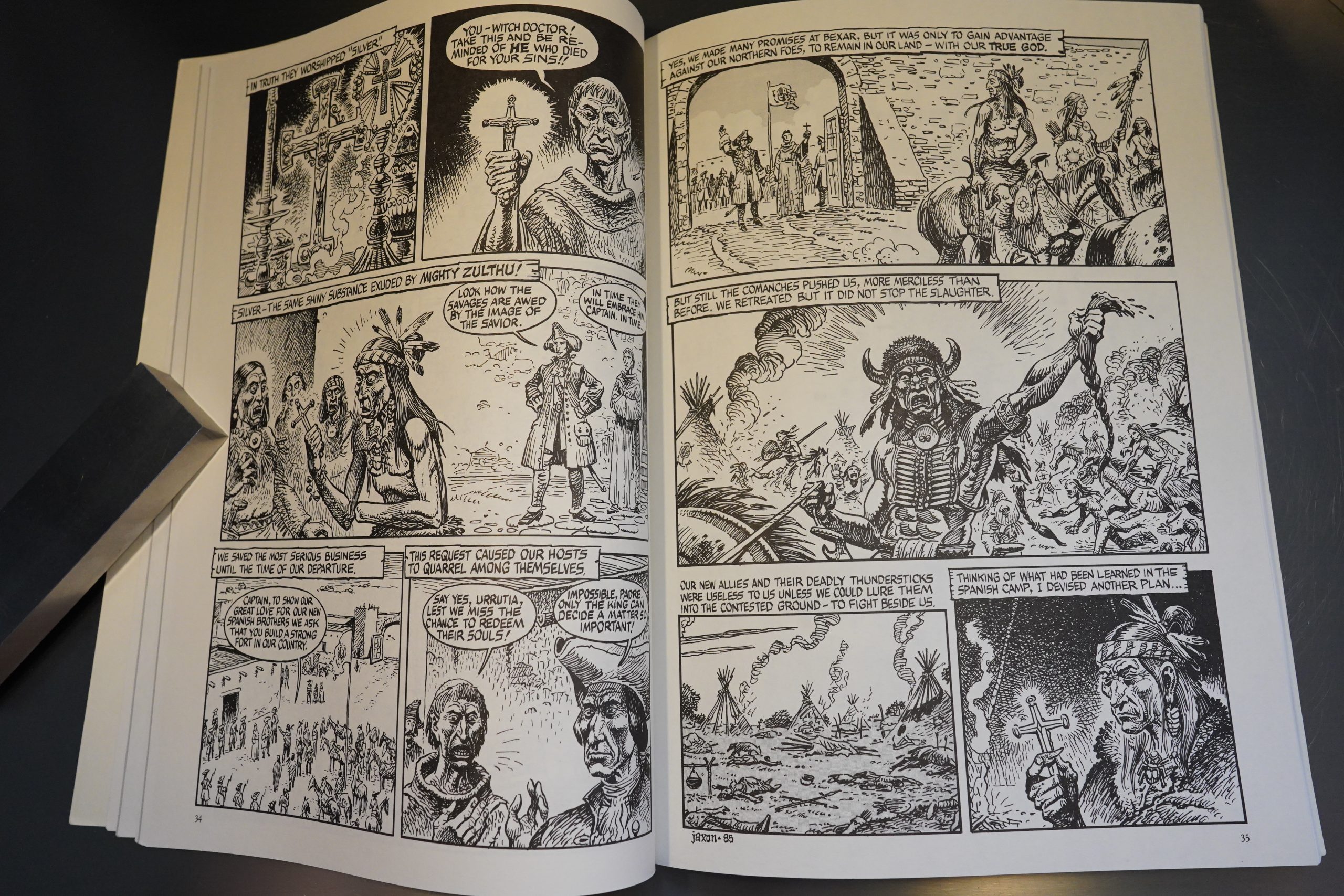 Anyway, this is drawn in Jaxon’s usual messy but very attractive rendering style. It’s so organic. 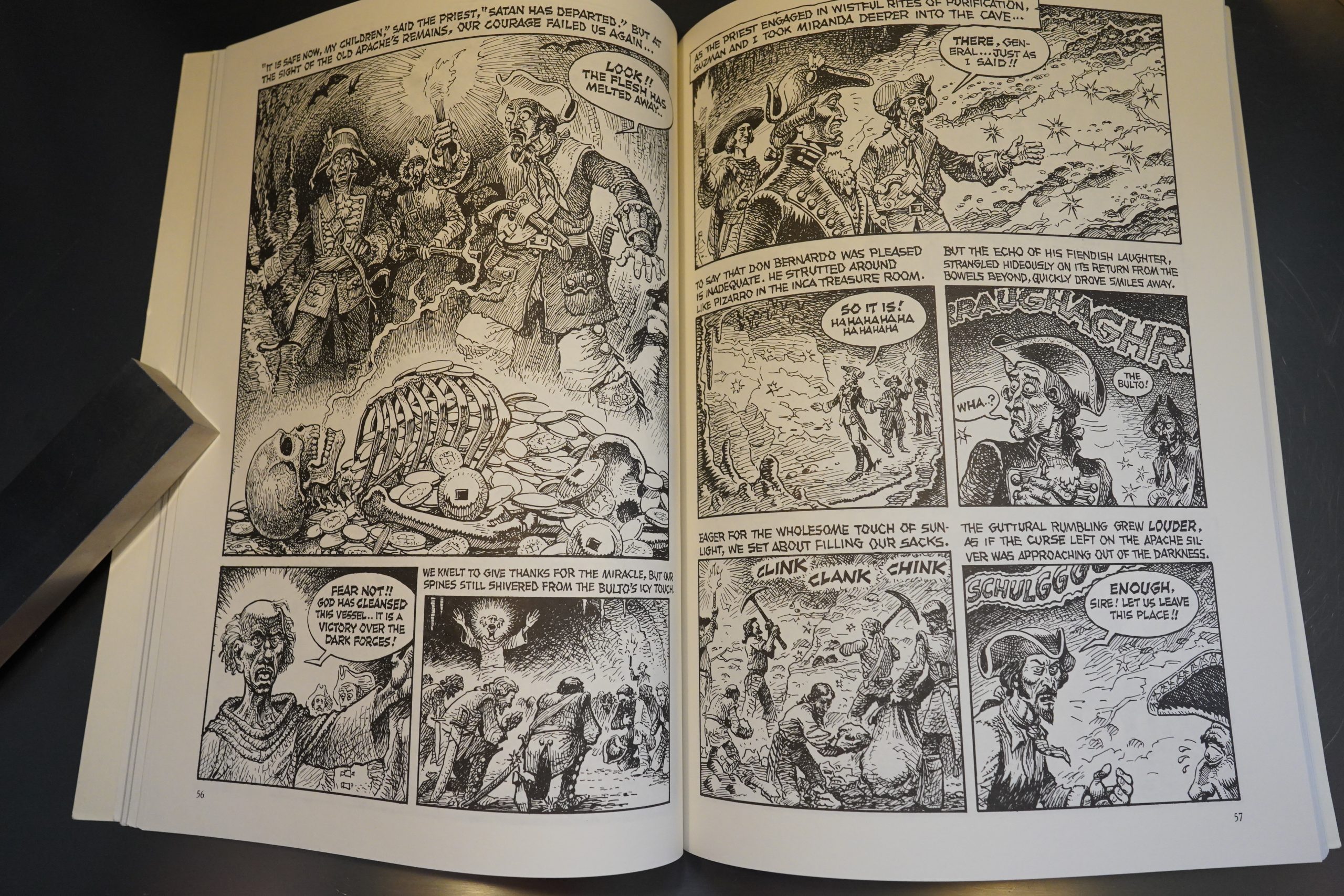 The story involves mad priests and aliens and silver and slugs. 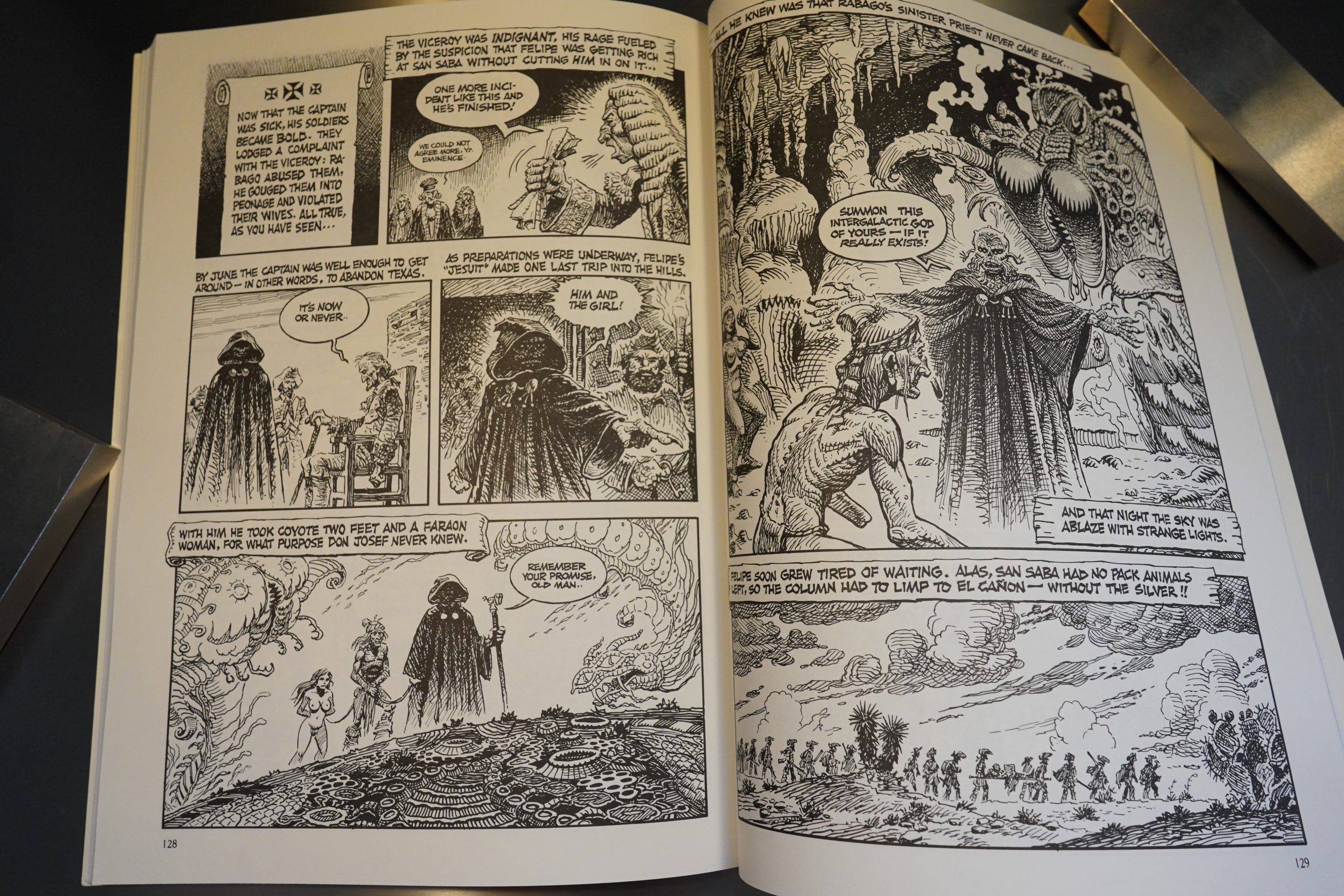 I’d have to say that it ultimately doesn’t really add up to much, and the story is pretty wonky. That is, it’s clear that Jaxon’s main interest here is in the history of this area, and not really so much in the supernatural story he’s telling?

Jack Jackson’s The Secret of San
Saba first appeared episodically in
Death Rattle magazine, where it had
the look and feel Of a serialized
adventure-horror story. It was inspired
by the story of the fabulous Lost
Almagre Silver Mine for which James
Bowie was looking five years before
he died at the Alamo in 1836. Jackson
was intrigued, like many other Texas
youths, by the story as it was told so
shrewdly and seductively by J. Frank
Dobie in his book about lost treasures
in the Southwest, Coronado’s Child-
ren. After I read Dobie’s book in high
school I felt like trekking out into the
granite hills to look for this particular
Eldorado. I didn’t ever get off the
highway, but it’s obvious from his
book that Jack Jackson did go to the
place and stomp through the brush.
His drawings evoke the spirit Of that
arid, rugged, beautifully spooky
place. You want to believe in the great
silver mine. Old records document
that the Spanish authorities took silver
fmm Los Almagres any smelted it into
bars at the presidio of San Saba. It
sounds like it had to have been there,
but the hedge is that modern
geologists it isn’t possible. Silver
doesn’t form in limestone or granite.
What a downer! But the area turned
out to be a true Eldorado after all. The
great West Texan oil boom was first
centered around Brownwxxi, Only 25
miles miles north of San Saba.
The collected version of Jackson’s
story expands and develops the
material. In it Jackson demonstrates
a serious historian’s attitude, going far
deeper into the subject than a casual
reader would expect from reading a
few episodes of Death Rattle. It is a
highly entertaining wild and woolly
yarn, full of Indian magic, suspense,
political intrigue, sex orgies, sword-
fights, running battles, savage vio-
lence, and even space ships, aliens,
and supernatural monsters. (It’s their
silver! What do they care about
of historical documents could make it.
And rememtkr frat Jackson is a writer
of historical fiction. For the story he
wanted to write, Jackson got the
history as correct as was needed.

The alien storyline
might seem inconsistent with the main
story, perhaps even an entirely sepa-
rate idea. I’ve heard the criticism that
the book would be better without it.
I might agree with the criticism, but
I do see what Jackson is trying to do
with this fantastic and illogical sub-
plot. He was doing some creative
gambling, taking chances, and follmv-
ing an idea: that the impossible silver
mine, where geologically there should
be no silver, was brought there by a
great meteorite along With non-human
life forms.

Jackson’s historical narrative is well
served by his drawing and storytell-
ing talent. I’ve read it a couple of
times already and I keep finding new
pleasures in it.

While there are comic set in the
past, there is probably no cartoonist
in the world who brings as much his-
tory with him to his comics as Jack
“Jaxon” Jackson. In addition to get-
ting the known facts straight, I’m rea-
sonably sure that Jackson engages in
original historical research. “Ama-
teur” historians are common in
perhaps because Texas has so much
history; Cabeza de Vaca was the first
Spaniard there in 1541. Subsquently,
there ‘*a.s a nearly continual Euroran
presence.
Despite the fact that Secret of San
Saba is a fictional work, it includes
a lot of factual information about the
history of Spain in Texas. That Jack-
son can weave this information in with
the story of Zulthu, the cosmic slug
from space, is astounding.

While Jackson’s interest in history
is strong, he doesn’t let it uke wer the
story. There are occasional humorous
anachronisms in the characters’
speech, and there is a weird episode
“in a distant galaxy” at the Institute
for Universal Evil. These aliens are
observing Earth, making plans to uke
were Their speech is like ordinary
Earth-bound corprate or
ic blather. Why are they in
Earth? it has “long-term im-
plications for our fuel crunch.”
Jackson’s art is always appropriate
for his subject matter, and as always,
his lettering is really neat. Most comic
book lettering is boring draftsman’s
lettering, but Jackson’s is clearly his
own invention, and it has a rough-
hewn, hand-carved look that fits in
with San Saba’s frontier subject mat:
ter. (I don’t mean to imply that it’s dif-
ficult to read, though. It isn’t.)
The Secret ofSan Saba is fun stuff,
the kind of thing that H.P. Lovecraft
would have done if he’d been from
Texas, did comics, and had a sense of
humor.

In the early chapters of The Secret of
San Saba, Jack Jackson for the first
time fully succeeds in bringing Texas
history to life. This is both because
Of and in spite of the nonsense about
Bulto the Silver Snail or whatever the
hell it is, a concession to popular taste
that Jackson seems to find a bit em-
barrassing. From the star, the con-
flicts between Indian and Indian and
between Indian and Spaniard are more
interesting to both creator and reader
than the horror subplot, but trying to
fit them into the horror comic mcxie
leads Jackson to truly dramatize his
historical comics, and the first time
they convey the feeling of history un-
folding. Unfortunately, about two-
thirds of the way through he reverts
to what might be called his Texas
History Movies style: the story is car-
ried along by captions, and the panels
either simply illustrate the captions Or
show a character commenting on
them. instance, on page 101: Cap-
tion: “At [garrison commander]
request, the garrison signed
a formal petition against the mis-
Sionaires.” Hnel: Men lining up to
sign the I*tition, Felipe thinking, “I’ll
teach them not to meddle in military
affairs.” Or, also on page 101, panel
four shows the soldiers angrily reject-
ing the priest’s excommunication
order, and panel five shows them
finally submitting to it, but the real
drama is what goes on between those
two panels, which we don’t see. It’s
not that this method can’t be effective
for exposition or transitions, as it is
earlier in the book, and it’s not that
it spoils the book altogether; it just
pushes the reader outside the story and
makes it far less involving.
In the broad sweep Of time it covers
you can see in San Saba the seeds of
the major work Jackson has in him;
perhaps, if he’s ambitious enough, one
that would start in pre-colonial times
and carry on past the Civil War and
into modern Texas history, which I
don’t believe he’s ever dealt with. He
has found the medium and the means;
all he has to do is use them.

This is the one hundred and eighth post in the Entire Kitchen Sink blog series.