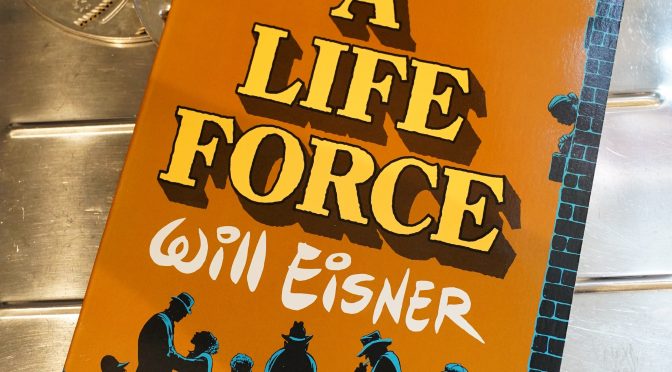 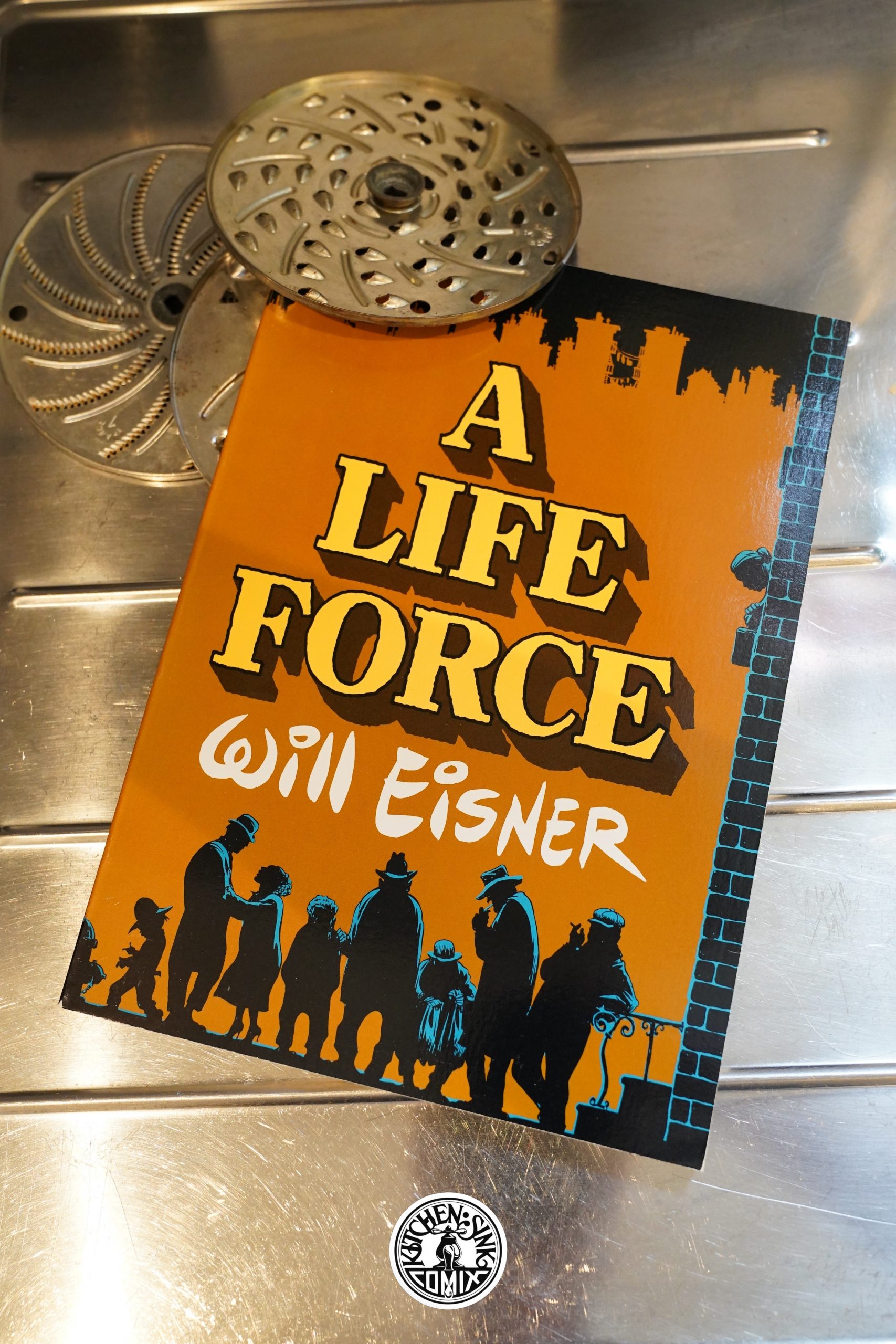 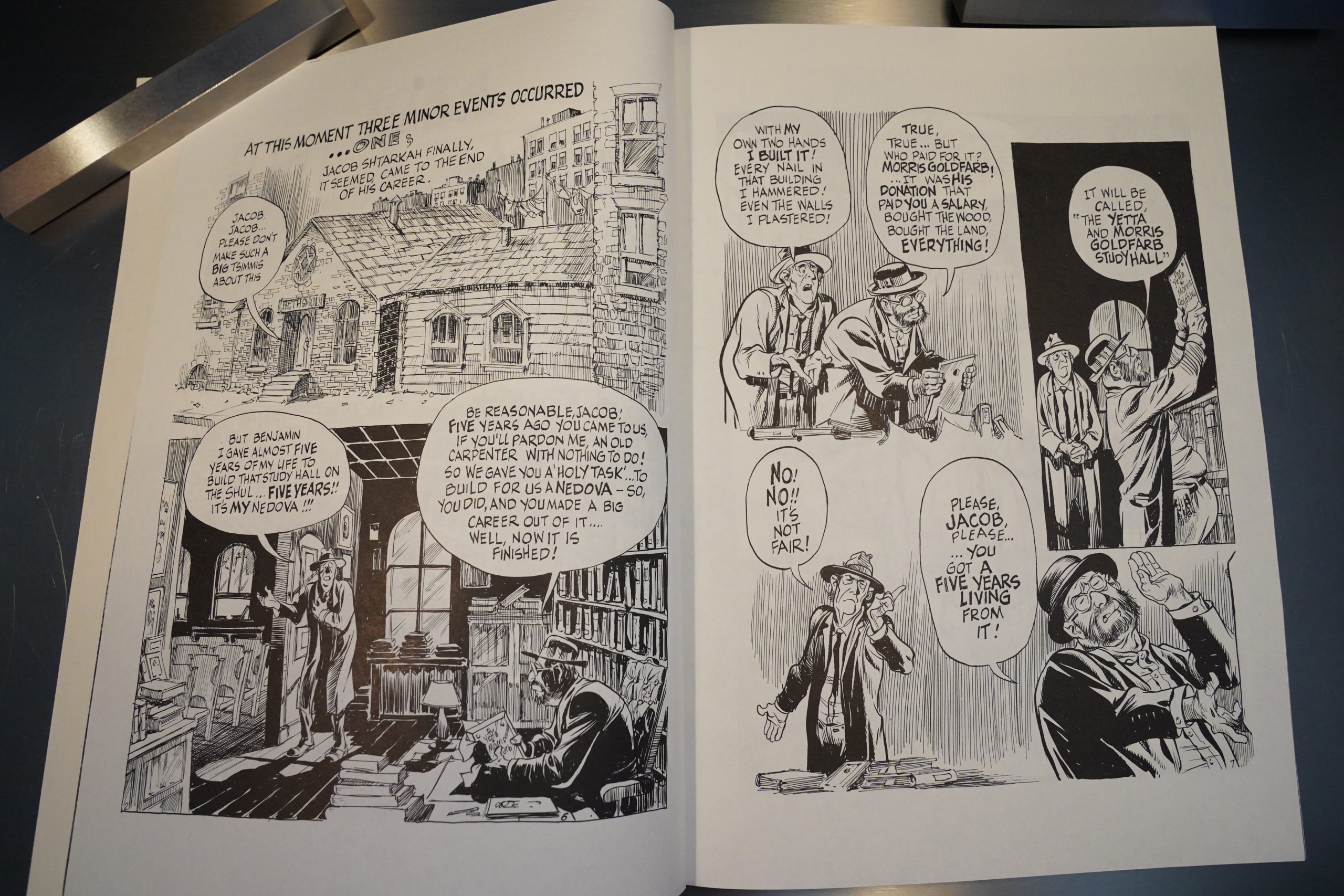 When I was like twelve I really liked Will Eisner’s comics. Then I grew up to be a wise-ass teenager, and I thought that his stuff was kinda maudlin and embarrassing.

Reading all these Eisner comics now in my dotage, I’m taking that thesis and that anti-thesis and landing on a synthesis: His comics are kinda maudlin and embarrassing, but I like them. 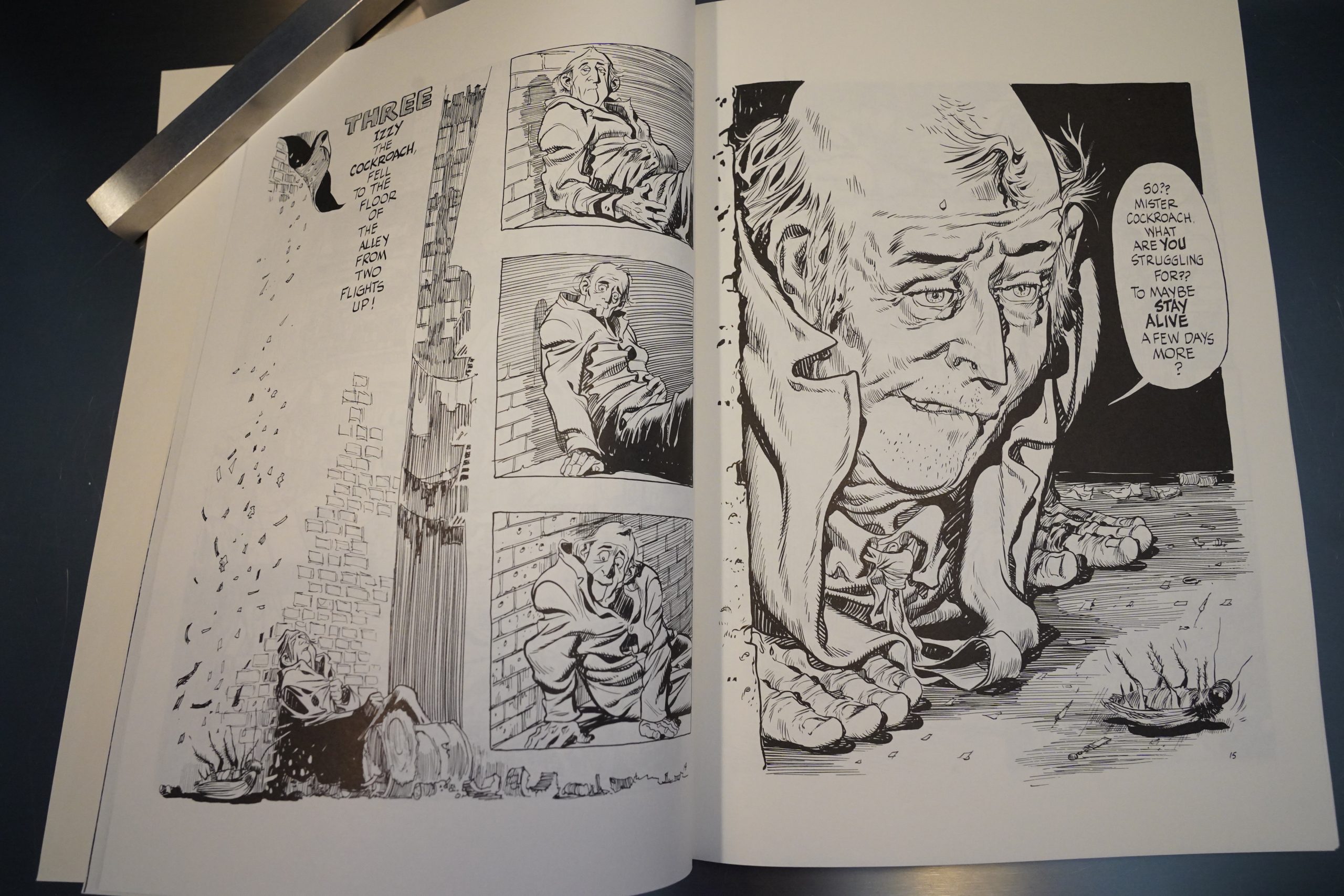 Eisner has many, many faults, like choosing some Great Theme for a book, and then hammering it home with the subtlety of a 2200Watt Heavy Duty Electric Demolition Jack Hammer. This one has survival as the Great Theme, so we get cockroaches every nine pages to remind us.

But that’s a really good drawing, isn’t it? 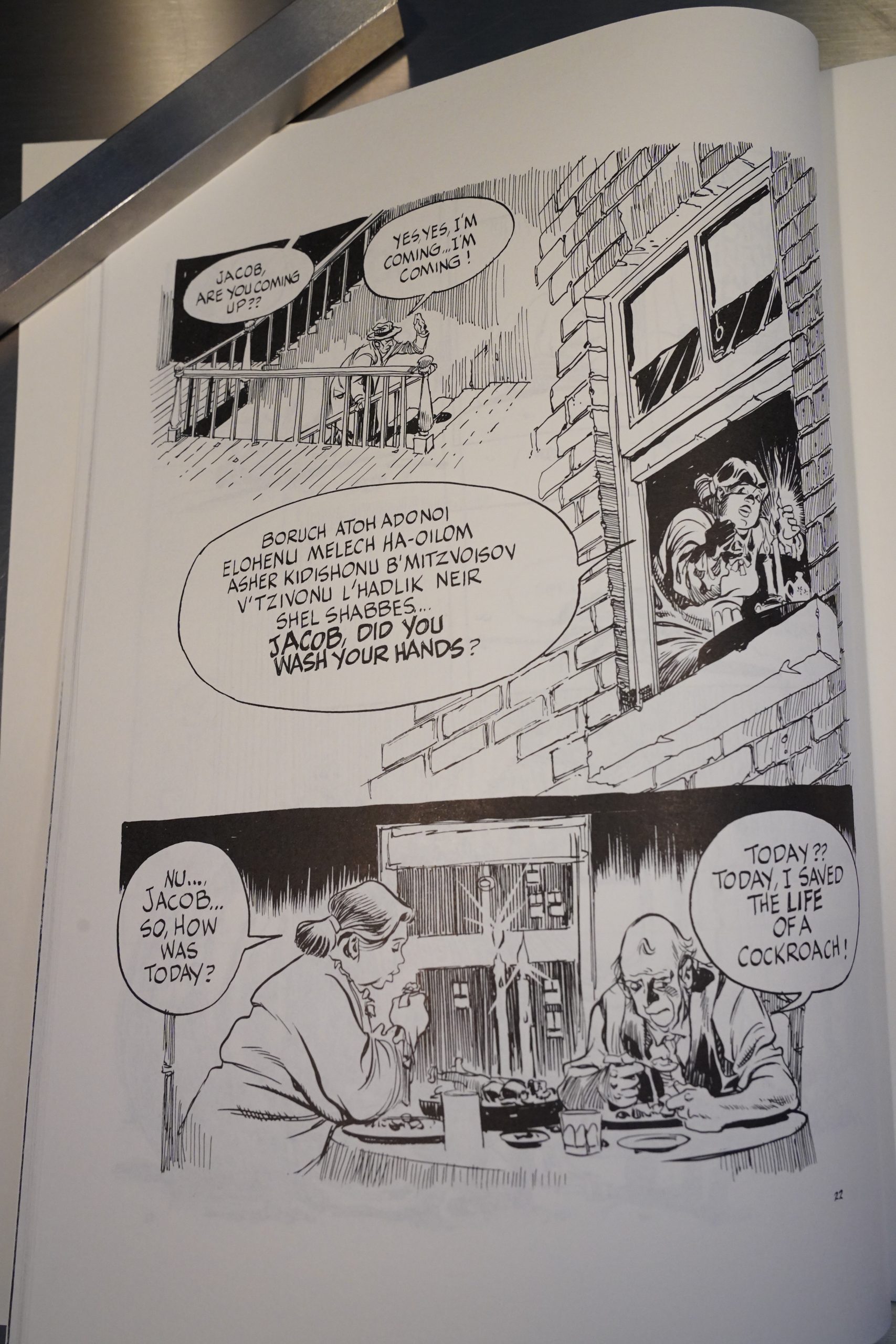 This was originally serialised in Will Eisner’s Quarterly some years earlier. Eisner’s books have a tendency to be a series of vignettes that’s tied together by that Great Theme, and this is organised the same way — but basically tells only one story (with some digressions). 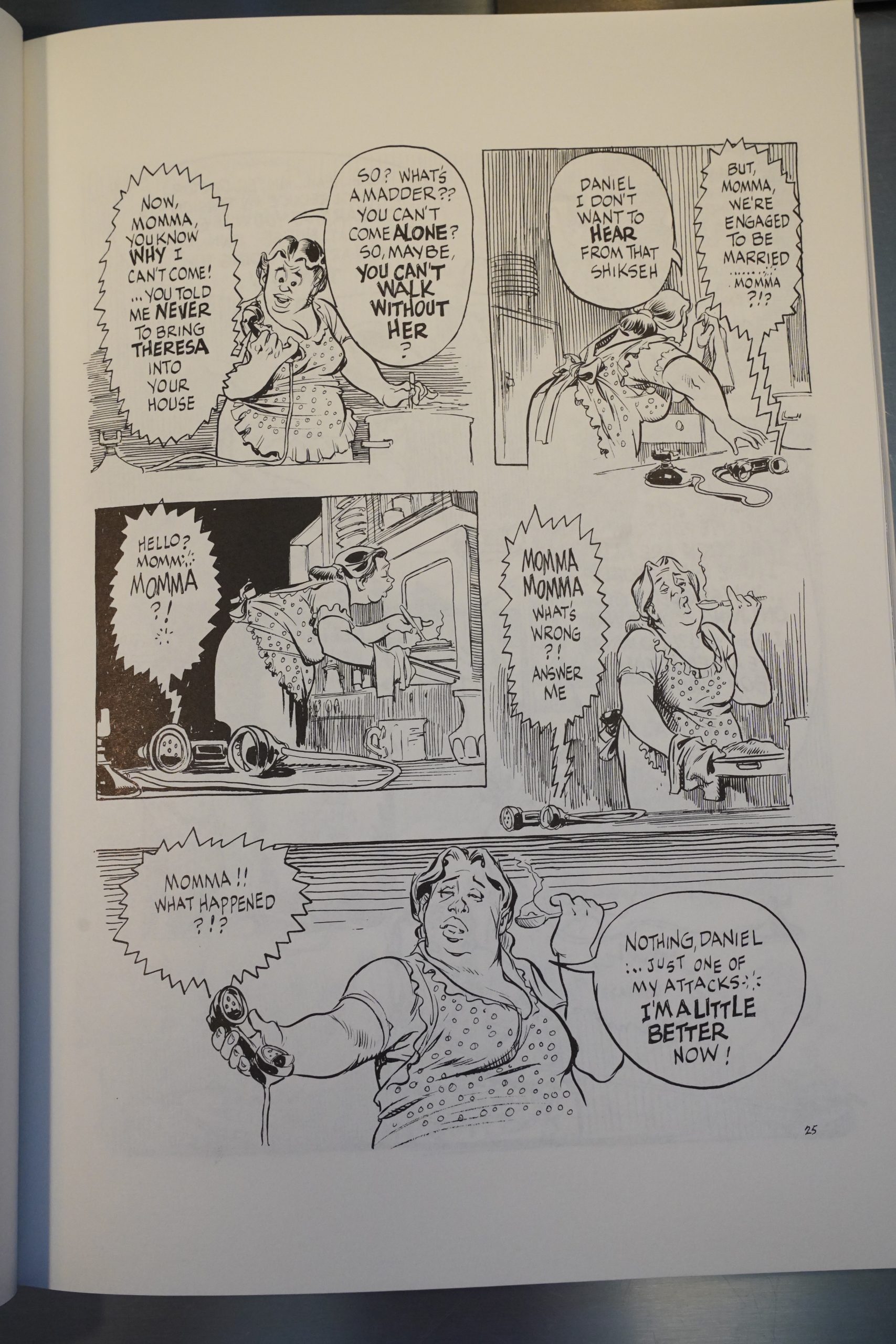 I feel like I’ve seen that page in Mad Magazine. 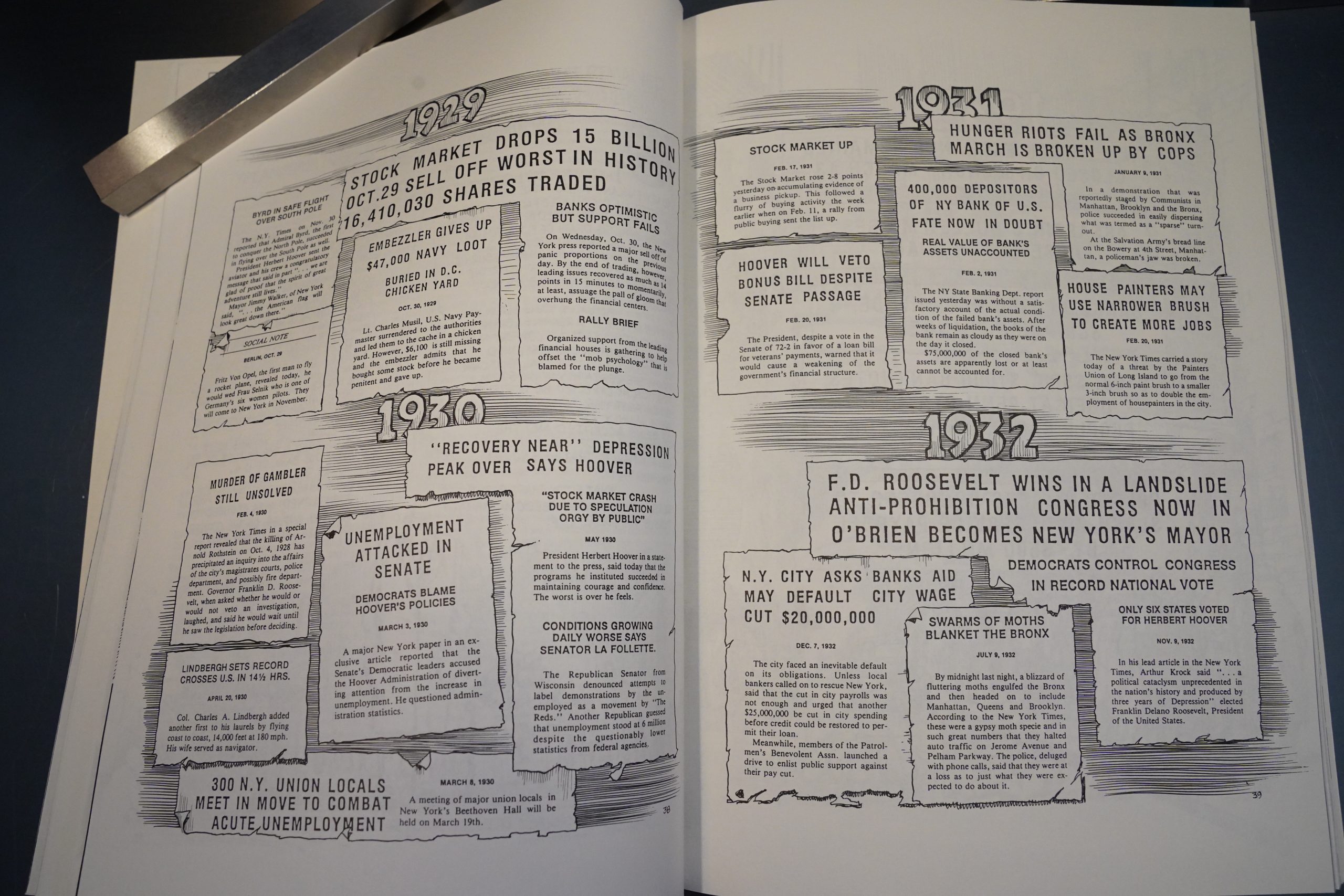 Anyway, this is Eisner’s big 30s depression book, and he drops in quite a few pages of news stories and factoids and stuff… 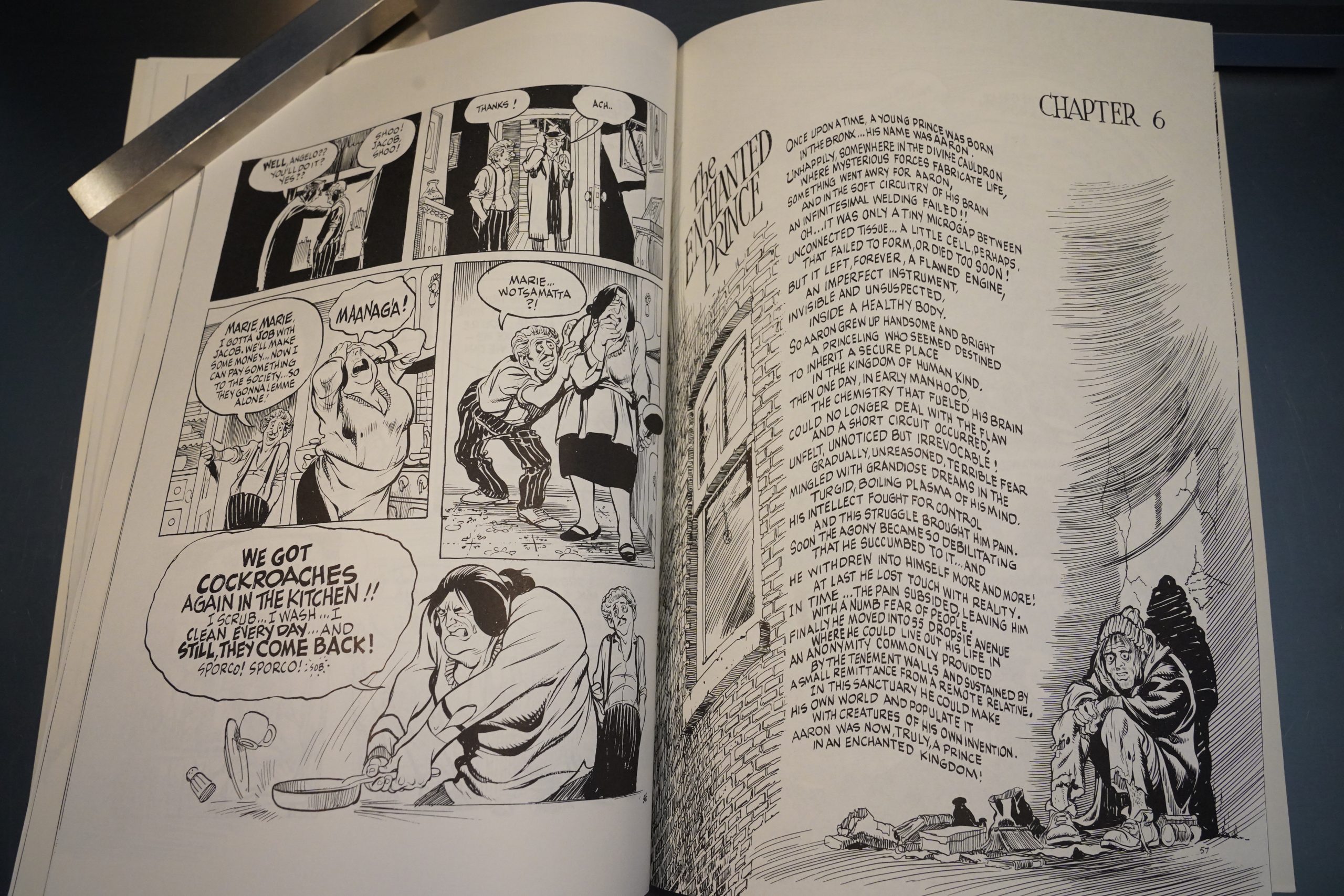 And even a kind of … fairy tale. 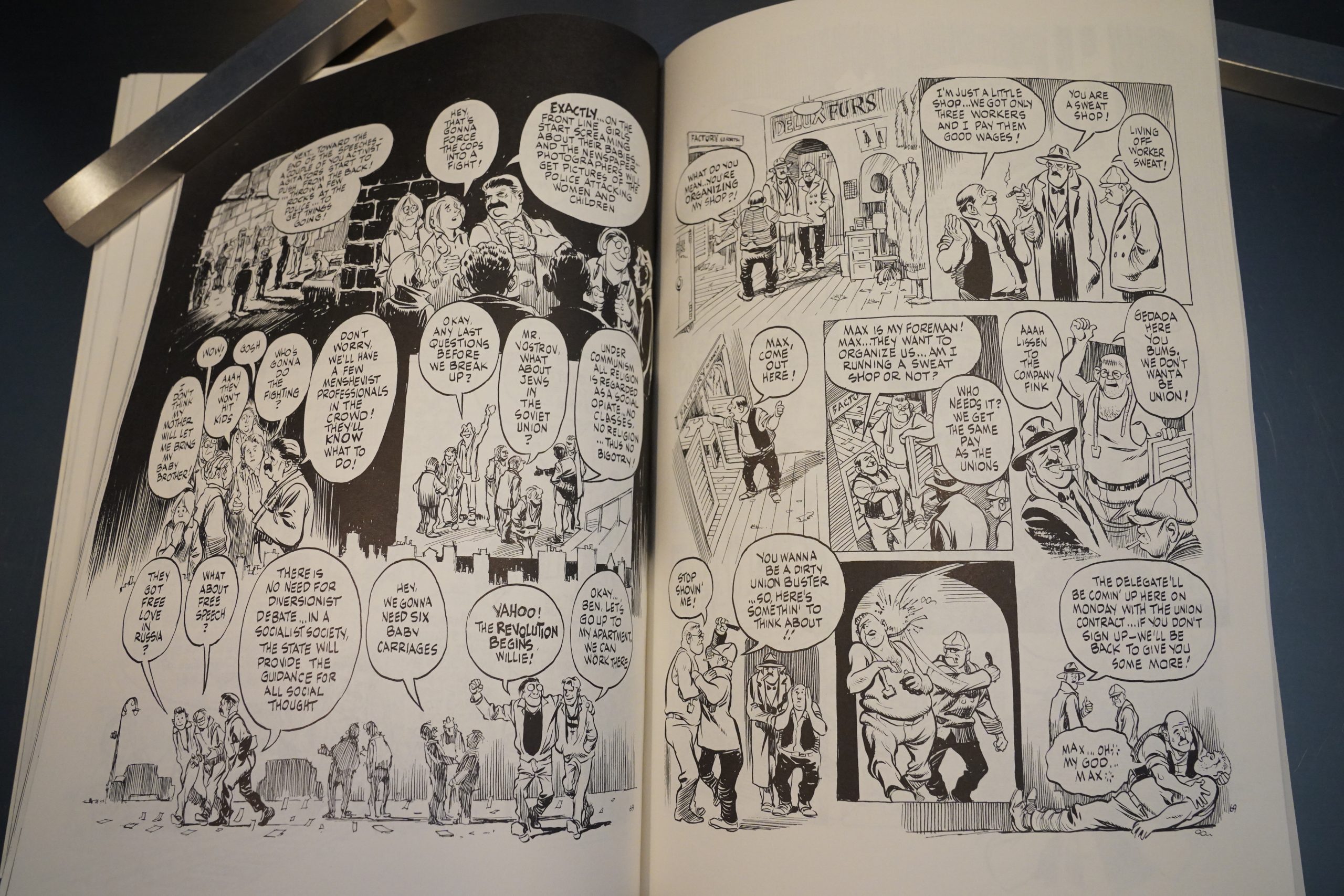 He’s also big on ironic contrasts: To the left, we have idealistic Communists, and to the right, we have real life, which means mobsters coercing shops to unionise. (I’m sure there’s an ironic contrast in there somewhere in Eisner’s mind.) 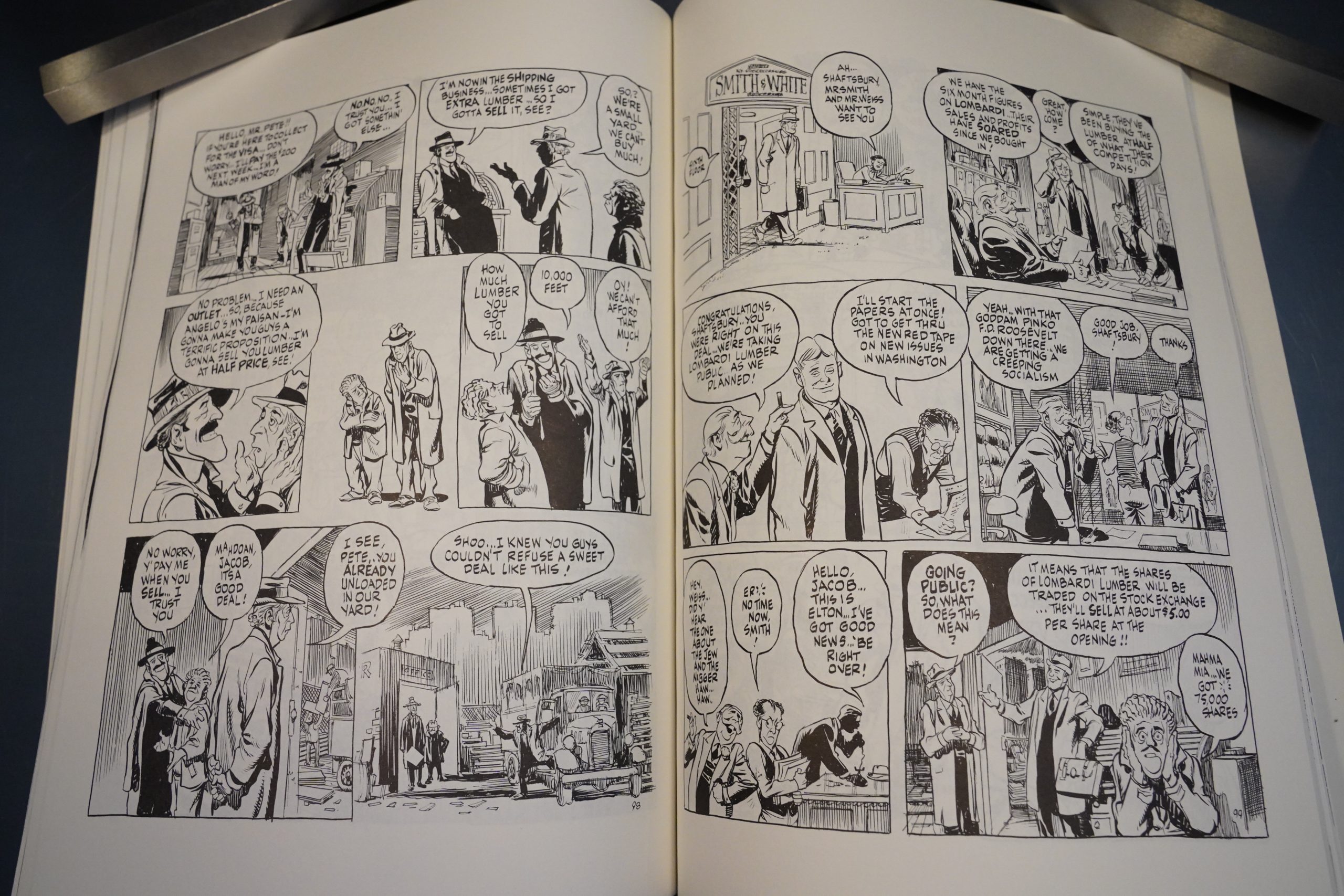 But this book differs from many of his other works. Of course it has an “ironic” ending, but this time it’s not quite what you’d expect. Instead he lands a sorta-kinda happy ending, but in an ambiguous and wistful way. 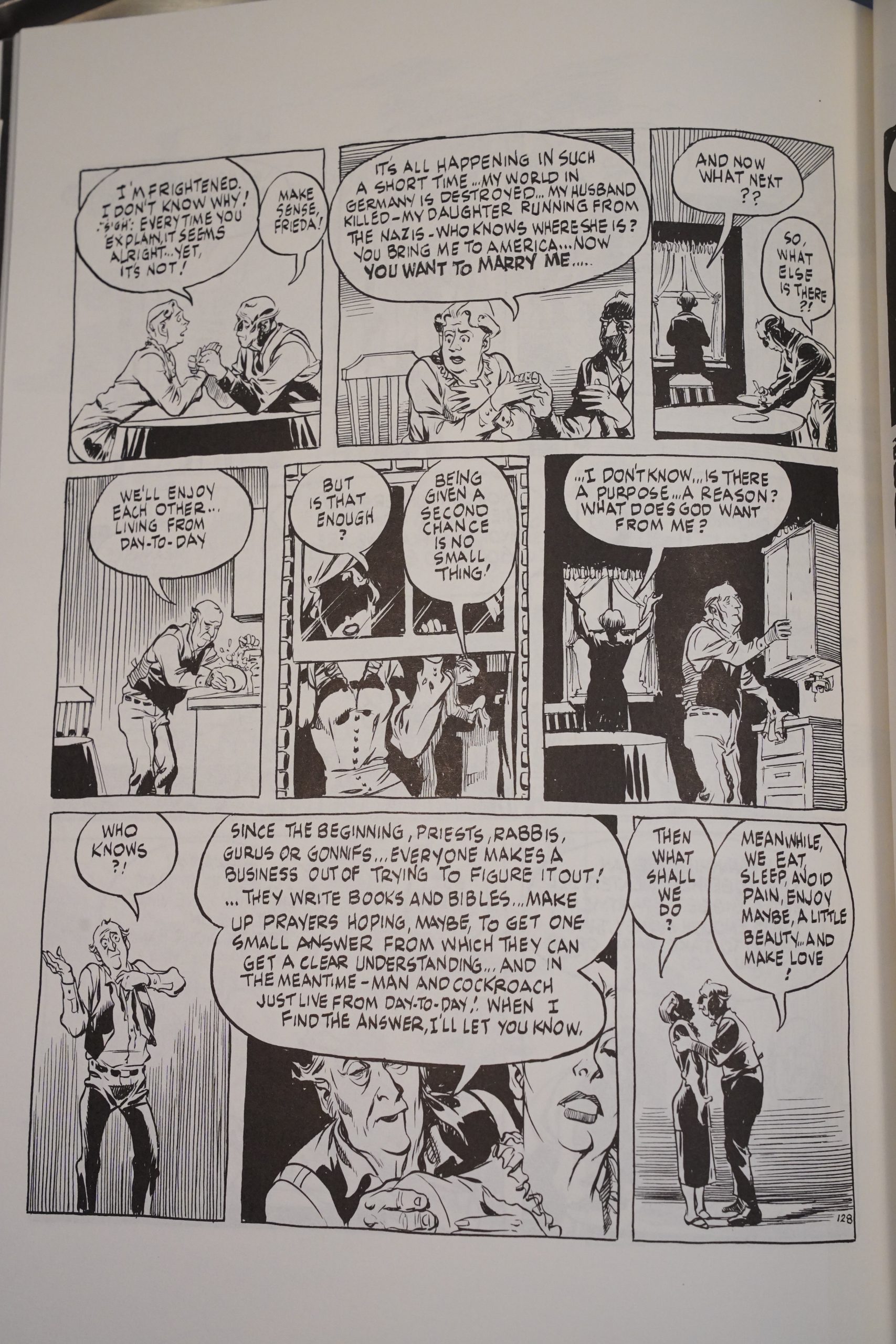 I think it kinda works? (I’m not showing you what that ending is here or anything; I’m not spoiling the twist!) Eisner, as he always does, ties up all the loose ends, but it’s done so brazenly efficiently that goes from trite to overwhelming, and I can’t help being impressed.

What I’m saying is that this is a quite good book, and much better than most of Eisner’s books.

Or perhaps Eisner is slowly brainwashing me.

With “A Life
Force,” Eisner gives us a seriesof fine-tuned
interlocking character studies set in Con-
tract’s Depression milieu, pieces that com-
bine Eisner’s Characteristic comic book art
style with a range of physical and verbal
expressiveness that humanizes his subjects
beyond the traditional caricature.

Following that came Life Force. Life Force
is reportage. It’s billed bv Kitchen Sink as a
sequel to Contract With God. simply
Ex•cause it takes place in the same area and
at the same time. But there I attempted a
kind of quasi-historical work, where I
reproduced articles that appeared in
newspapers at the time and built my stories
around that facade, using the newspaper
articles to give moment to the stories, to
give a historical reference, and at the same
time build a story around a man who was
looking for a meaning of life. In the case of
A Contract With God. was one where the
first story dealt with a man’s struggle with
his relationship with God. Somehow or
other God sometimes does not fulfill on his
bargains that are part of the contract that
we create. We’re always creating a contract
with the deity. In the case of Life Force, it
was really an observation that man con-
tinues to move on as a result of some inner
force that keeps him going despite all the
things that happens to him. And I compare
it to the cockroach who keeps going and
going on without any perceived reason. So
those three novels each deal with a subject
area that requires a little life experience to
appreciate.

I think the book was generally well received:

Though not as well-known as A Contract with God, in many ways A Life Force surpasses its predecessor. While that first book was technically a collection of short stories, A Life Force is truly a novel, one complete work of literature that develops over the course of roughly 140 beautifully illustrated pages.

WW Norton combined this with A Contract With God and Dropsie Avenue into a brick:

A Life Force follows the ways in which love, tradition, organized crime, and politics affect the inhabitants of Dropsie Avenue more than they are willing to admit. Again, readers see Eisner’s hard work to create natural borders for his panels or to painstakingly integrate them into the scenery. The end results puts readers deeper into the story in a kind of physical sense that straightforward panels could not accomplish.

This is the one hundred and second post in the Entire Kitchen Sink blog series.