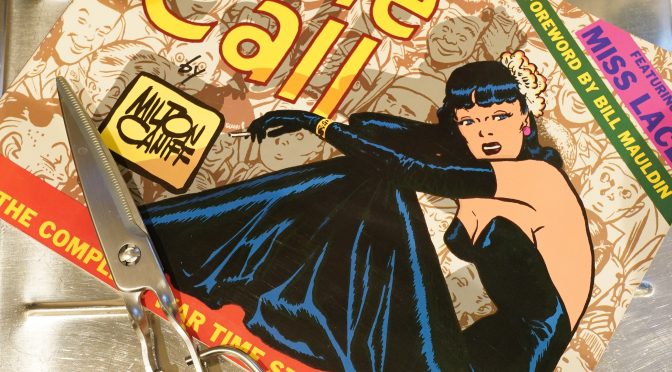 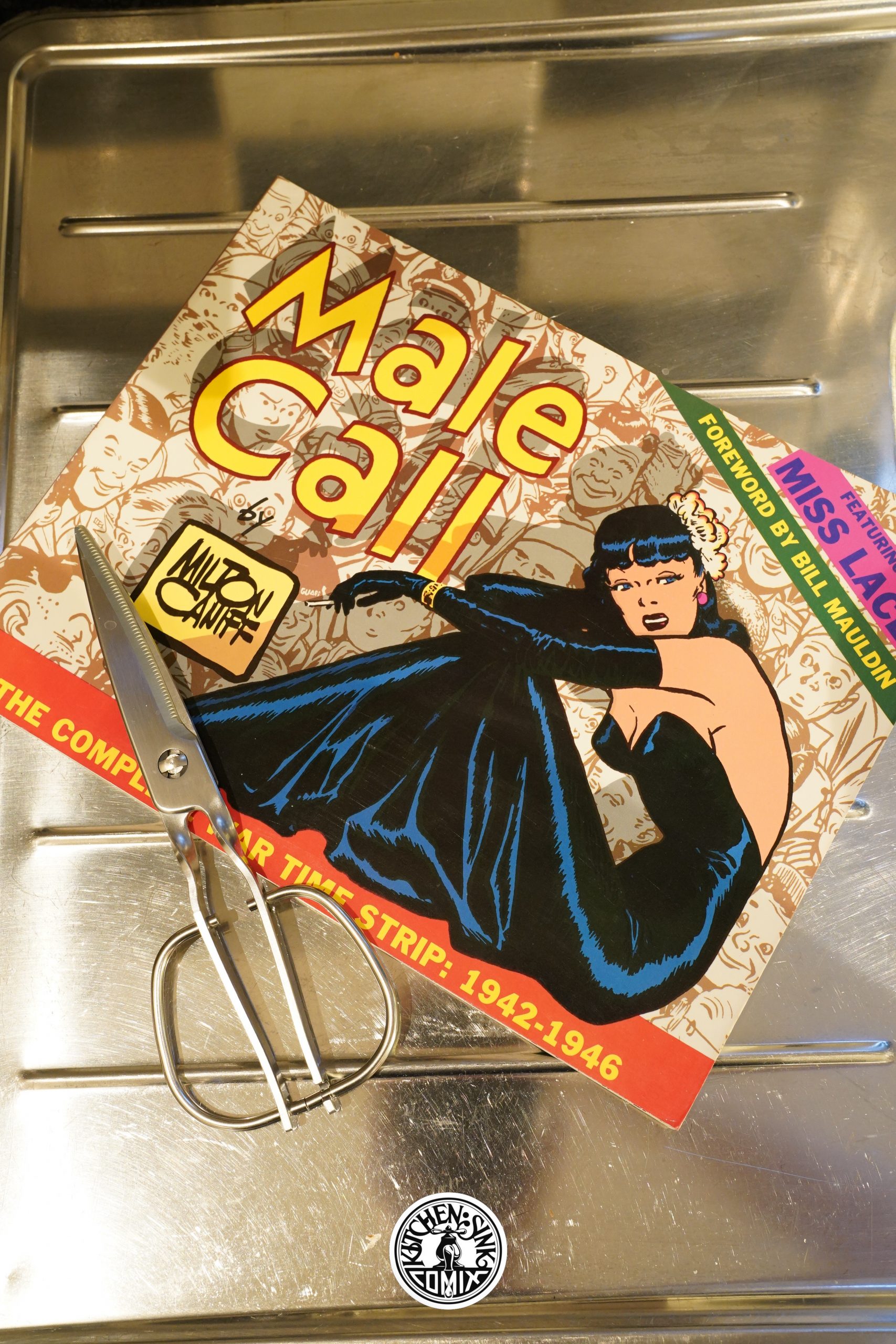 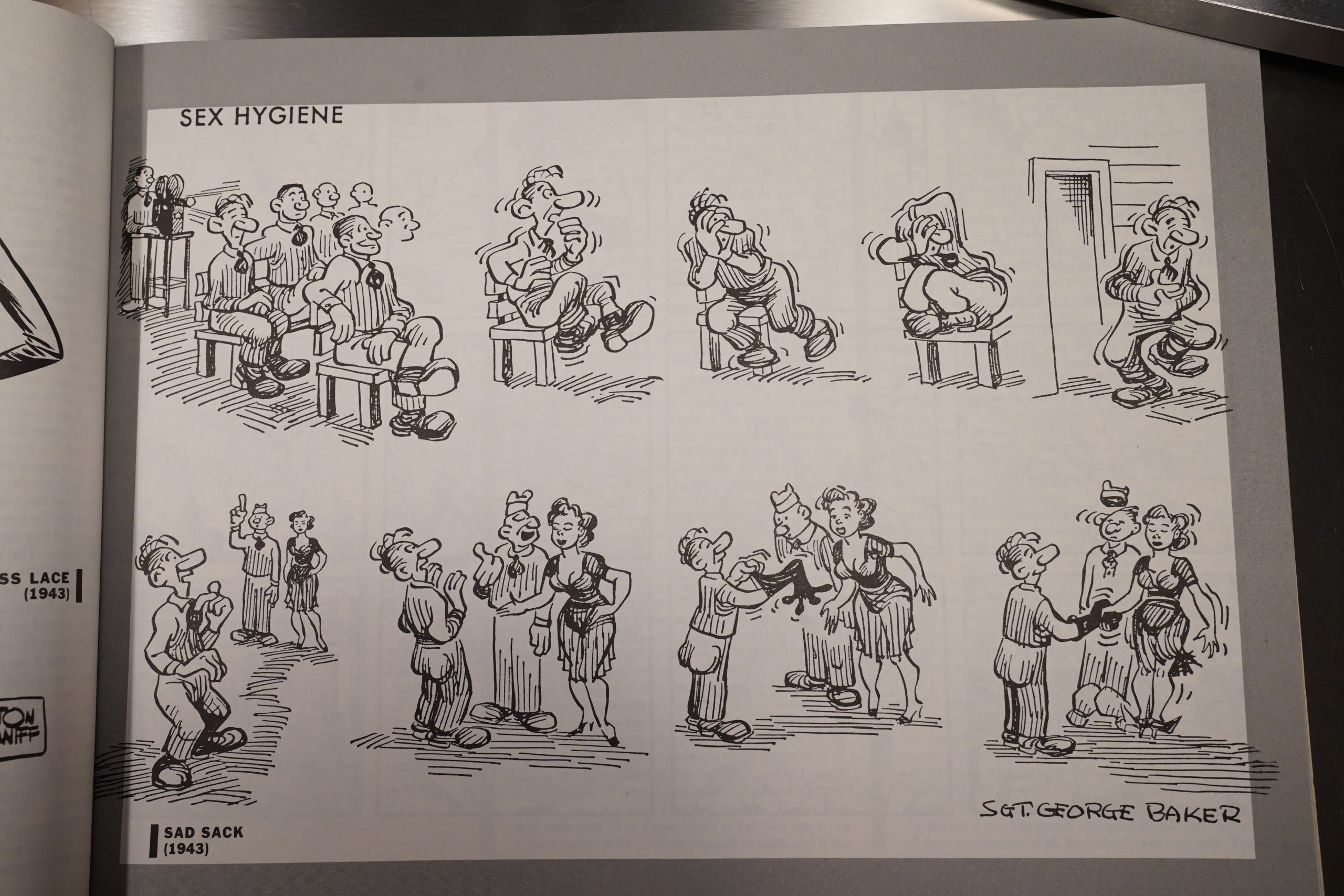 This book reprints Caniff’s weekly strip that he did for the US military during WWII. We get a bunch of background material, and strips by others for the military. 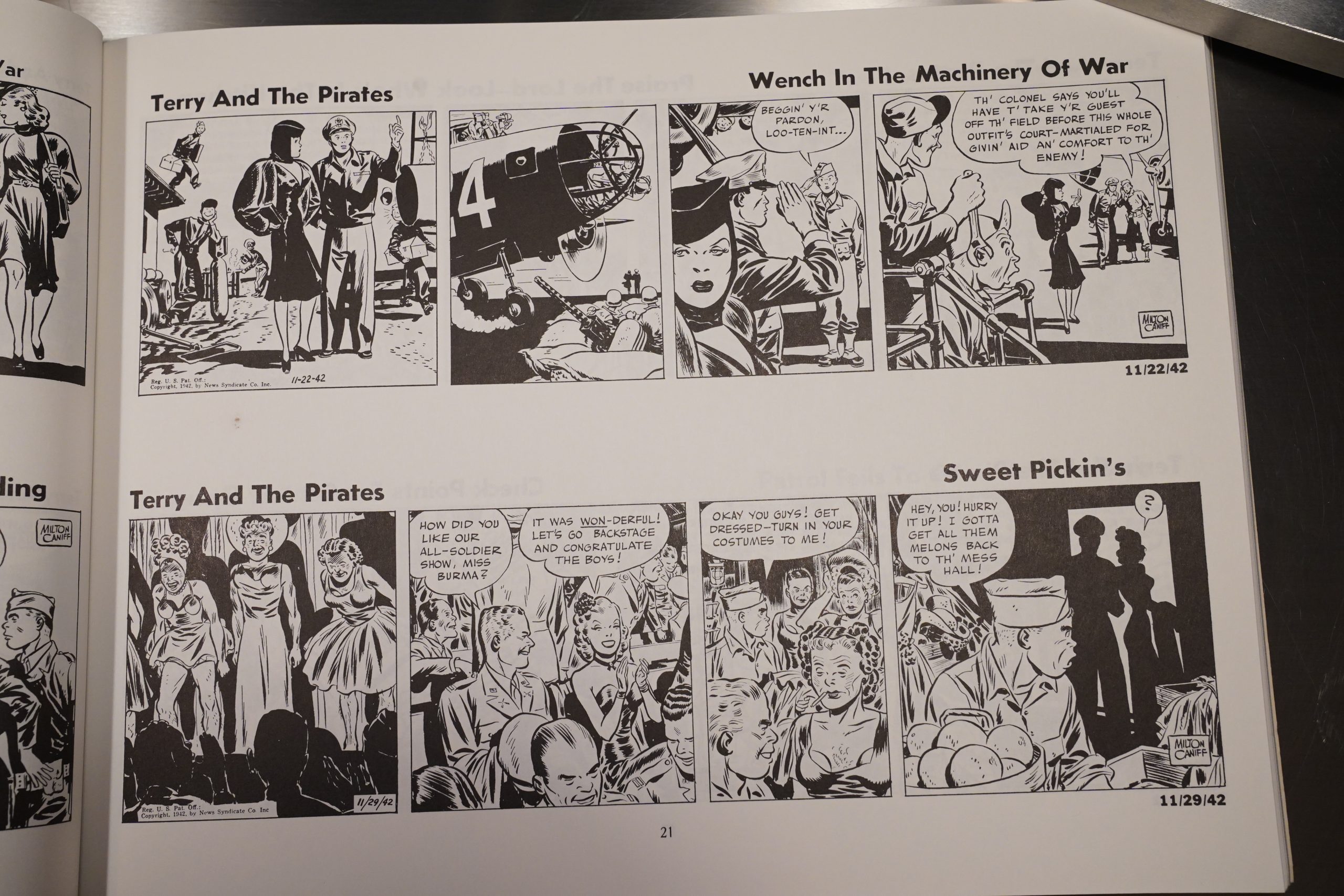 The strip started off as a version of Terry and the Pirates, but as a weekly gag strip with a focus on a character called Burma. The syndicate didn’t like that, so Caniff changed the name to Male Call and carried on. 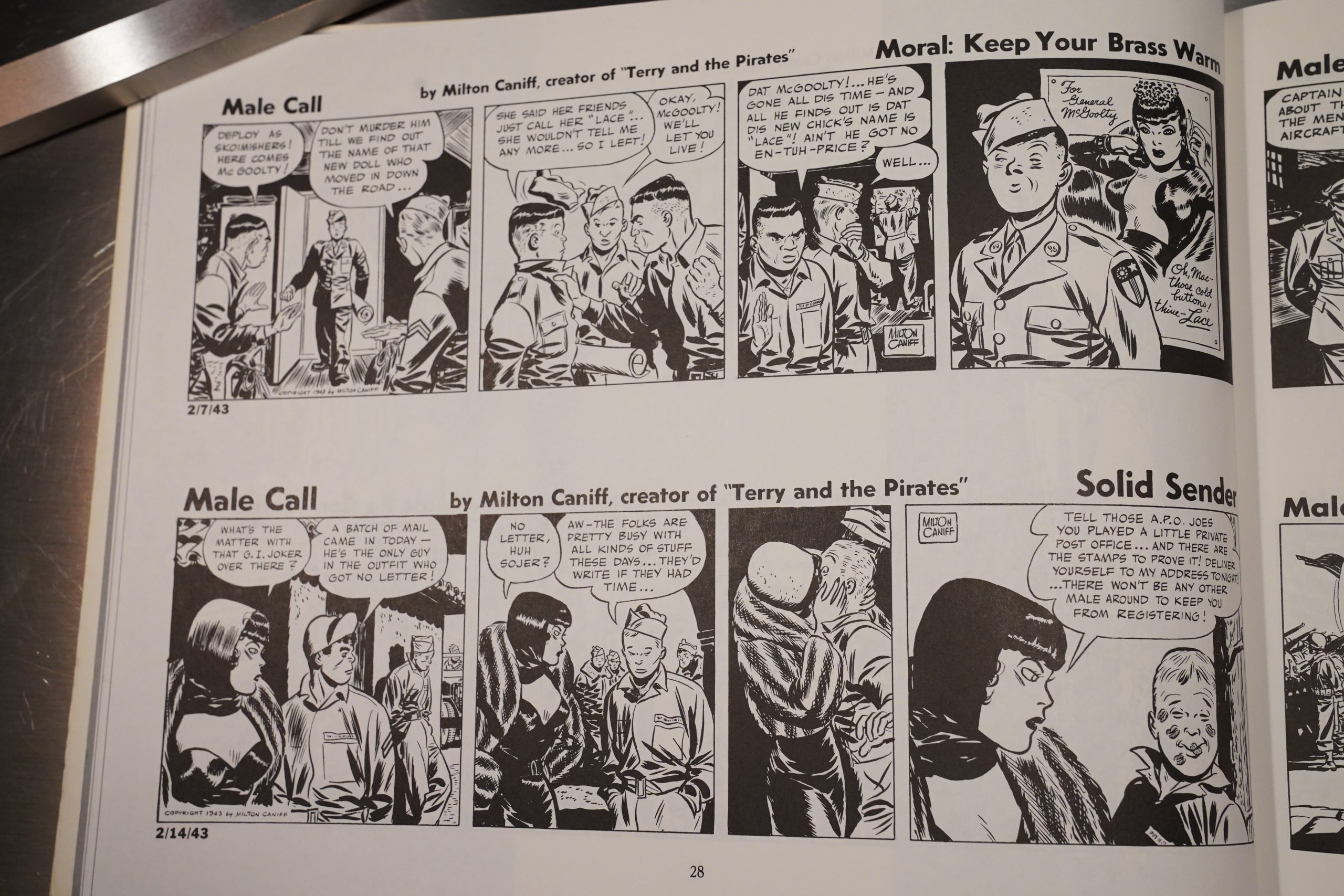 As gag writers go, Caniff is a good artist. 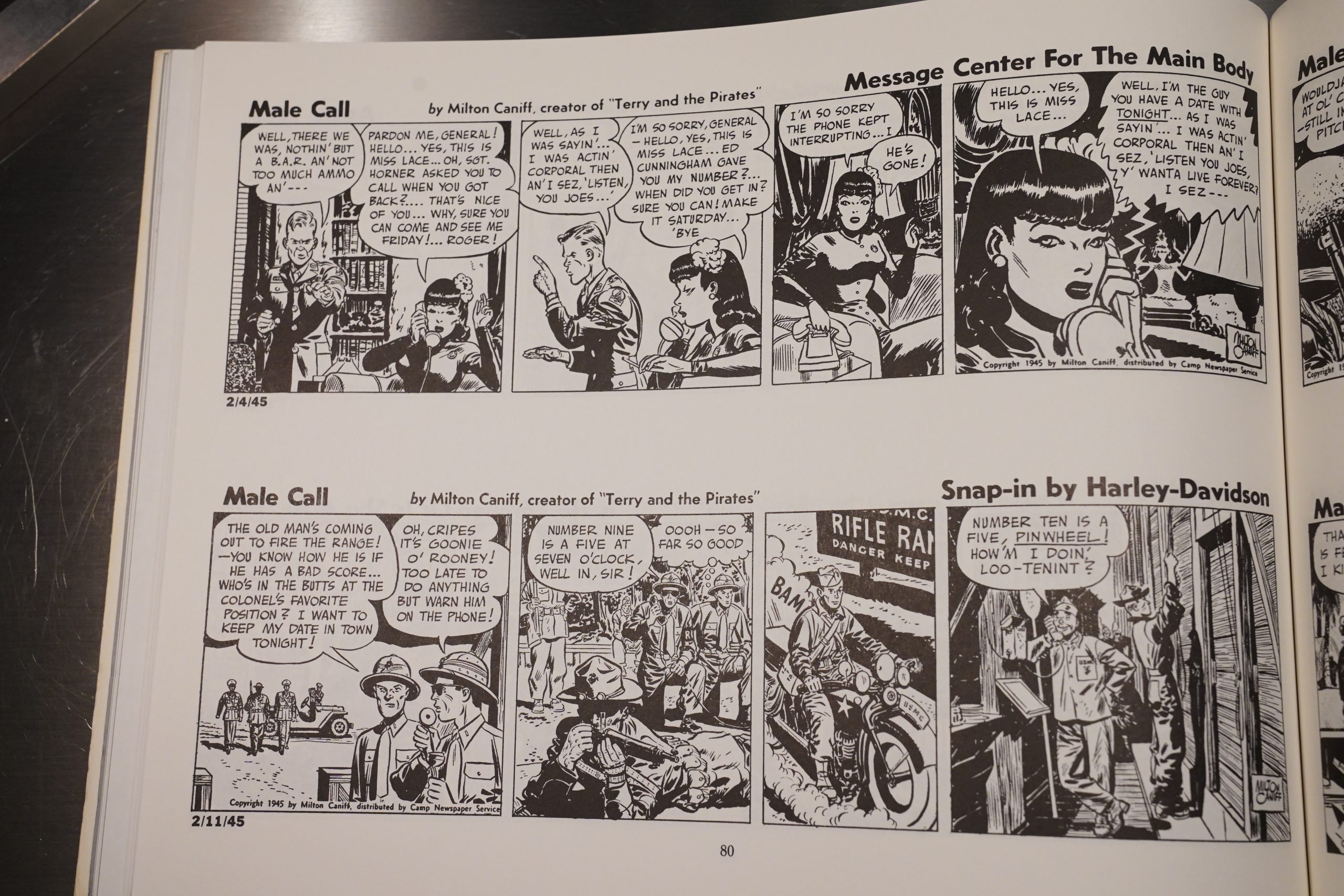 There’s a consistent theme to the strips, at least. None of them are actually, you know, funny? But they probably did their job. 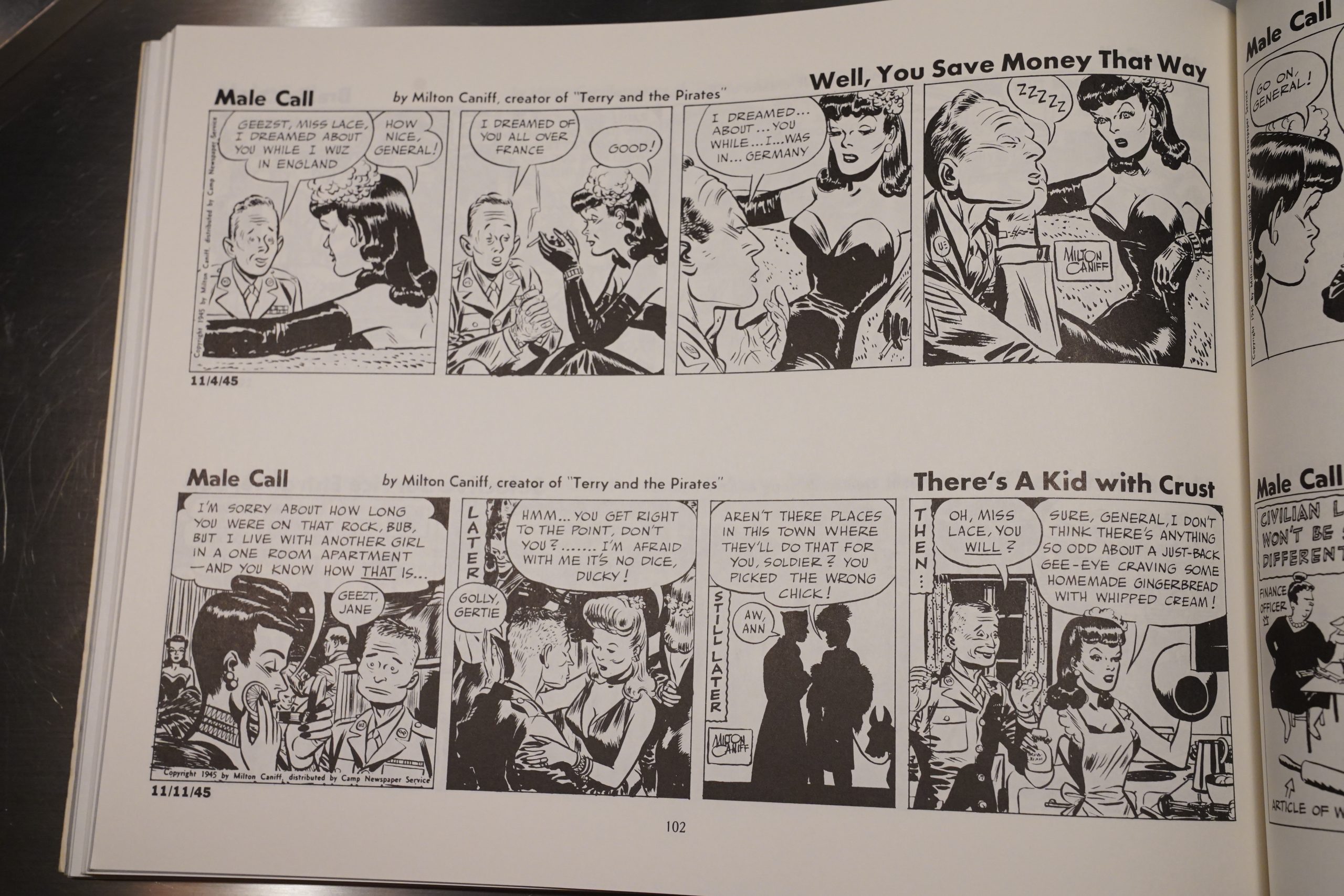 At least they look good. 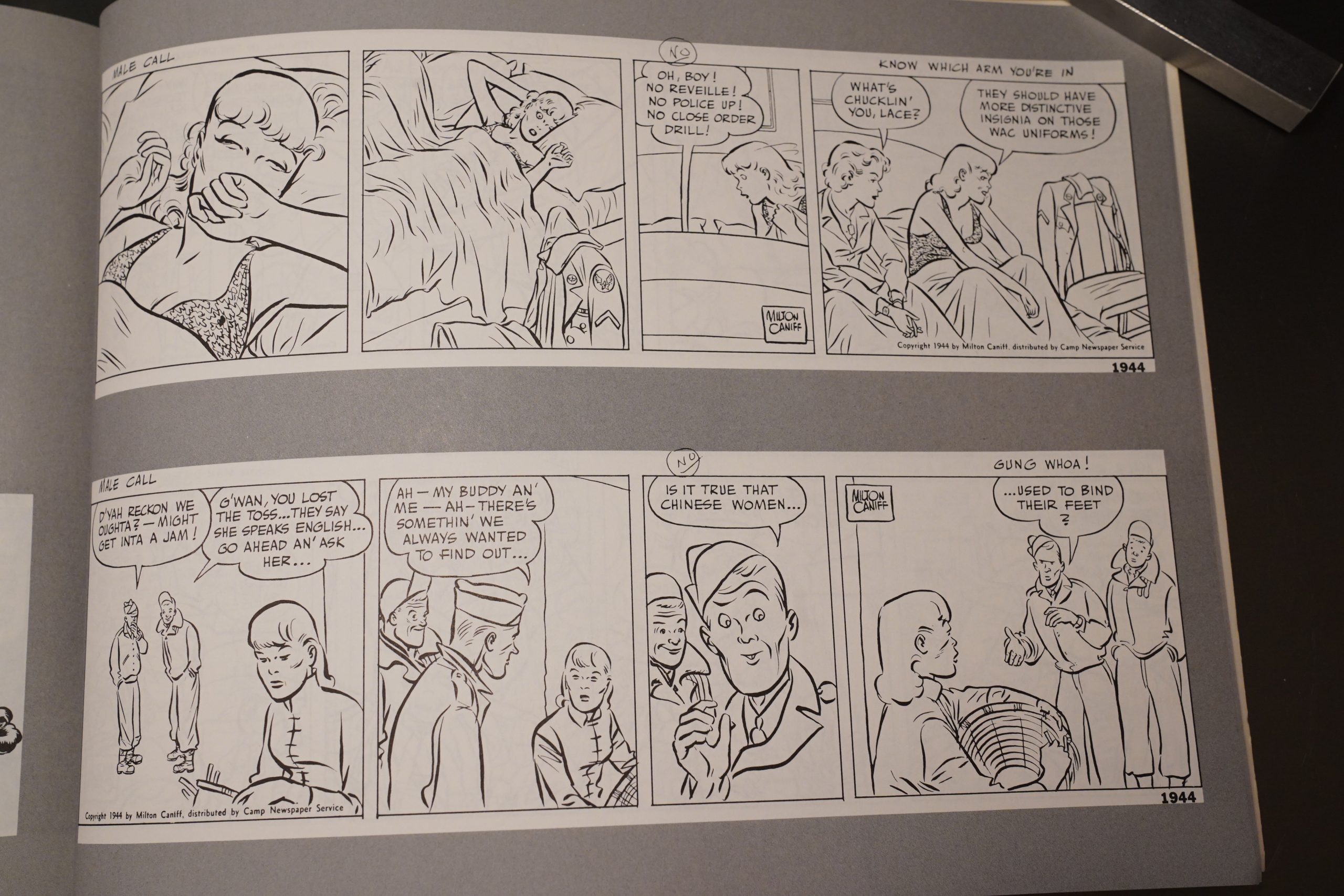 We also get strips that were rejected by the editors for being too risque.

Daring for its day, Male Call nevertheless seems
a model of good taste. Still, Caniff had trouble
with censors and would-be censors, chaplains and
the wives of the upper echelon.
[…]

But the problem was the pose not the prose.
The explanation: Caniff could do a pin-up Lace
but not if she lay on her back. Reclining was too
suggestive. “I tried every way I could to get her
to sit up in the strim” Caniff laughed, “but I could
never manage it.”
The drawing for the scotched strip, however, he
was able to use in promotions, and the rendering
Of Lace recumbent was eventually so widely circu-
lated that it became the most familiar picture of
his convivial camp follower.
Despite the prominence Of Lace’s figure in Male
Call, only about half the strips deal with sexual
subjects. And lace herself appears in only 95 of
the 160 strips, and only 53 of those appearances
involve sexy innuendo. Some of the unlaced in-
stallments humorously air traditional G.I. peeves
or light-heartedly moraliæ about the soldier’s lot
in the Army or his worries in wartime.
The theme Of G.l. loneliness with Lace as the
antidote pervades the strip, but lace ministers to
all kinds of hurts as well as homesickness, and
she squeezes in occasional lectures on simple good
citizenship or patriotism. By careful design, she
attended to more than the serviceman’s libido
during the run of Male Call; she nurtured much
more than erotic daydreams.
When he was Air Force Chief of Staff a decade
after WWII. General Nathan IWining still remem-
bered lace and the special contribution she and
Caniff made to the war effort: “I don’t know
anyone, at any level, in any service, who didn’t
fall in love with Miss Lace in World War II. She
was everything we’d left behind—a pal and a pin-
up and a laugh when we needed One. She was
Milt’s gift to sevice morale.”
With the publication of the Kitchen Sink book,
we can see for the first time the complete dimen-
sions of that gift—all the strips, plus some fill-in
articles CNS ran about Caniff. (And, for the bene-
fit of historians on the matter, all the strips are
dated, too.) Lace’s final bows in Male Call are
also recorded here—the last strip (March 3, 1946)
and the drawing Caniff did for the Editor
Publisher article announcing her retirement. But
Lace has come Out Of retirement Occasionally since
1946 to grace the covers of programs for Air Force
Association events and other such special occa-
sions, and a sampling Of these encore appearances
concludes the volume.
The book is a richly textured vision of an impor-
tant and unique page in comic strip history, a page
that puts the final touches at last on the portrait
Of Milton Caniff as America’s Kipling.

I think the dialogue is fine:

I’m not saying the dialogue is bad, mind you; the style simply takes some getting used to. It is also easy to see why the wisecracking approach that sustained Caniff so well during the 1930s and 1940s turned off so many people during the Vietnam era, when Caniff’s STEVE CANYON began hemorrhaging readership.

This is the ninety-fifth post in the Entire Kitchen Sink blog series.