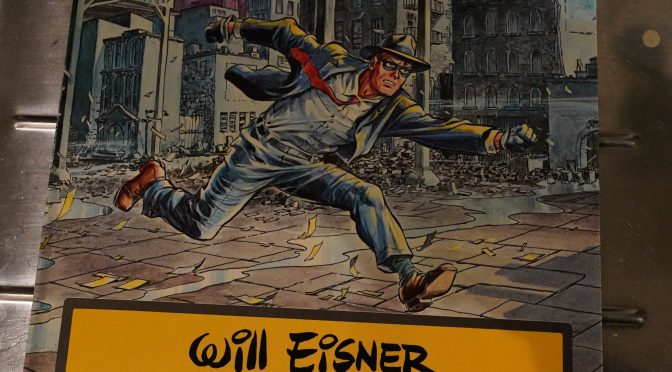 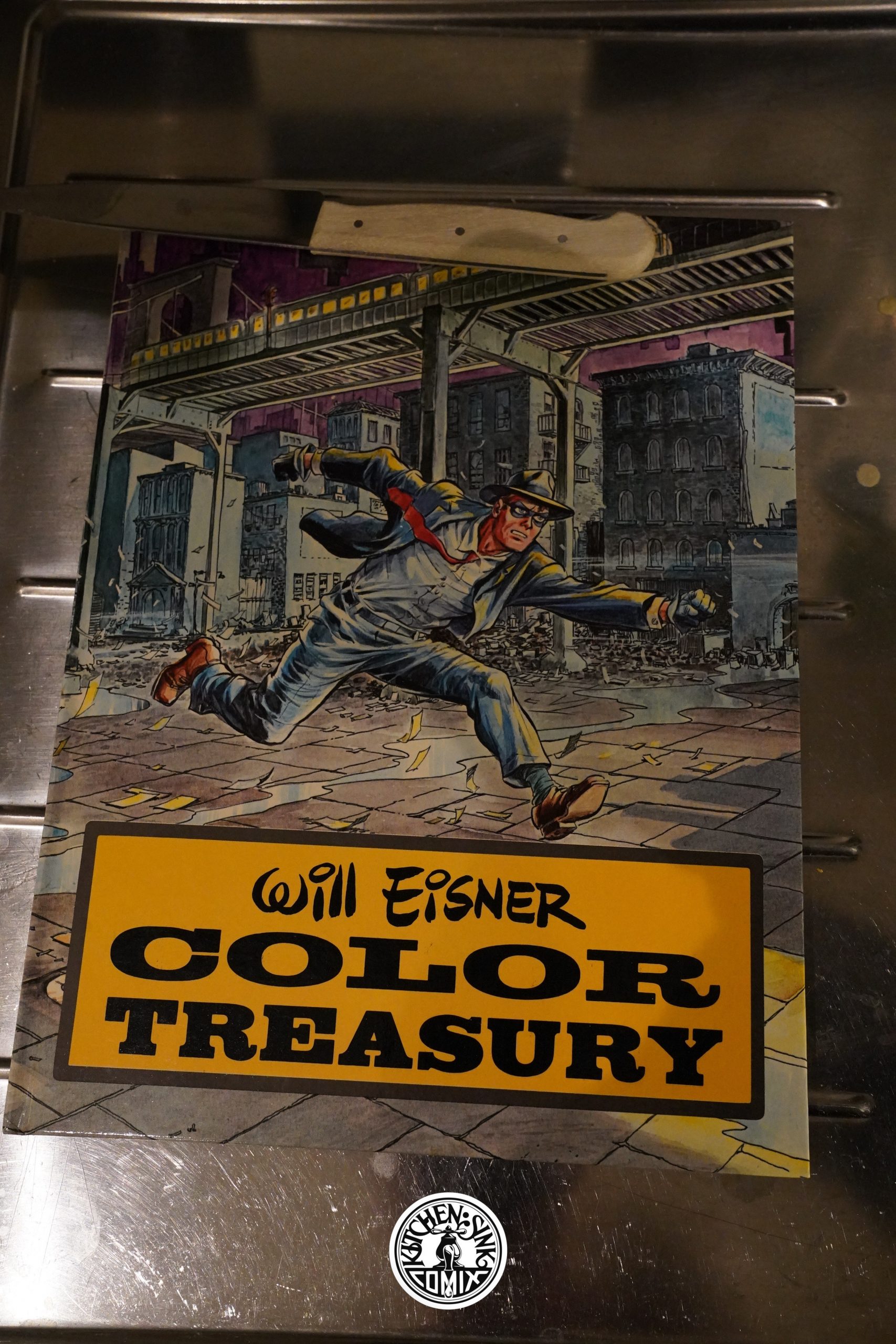 The Underground Comix era of Kitchen Sink Press is basically over, so what were they going to publish now? They were gonna publish a lot of these things: Basically European album-sized books (i.e., big and somewhat thin), and many of them reprinting older comic strips.

Many of these books would be published in a number of different editions: For instance, a super-limited and expensive edition with a sketch inserted, a less limited signed edition, an unlimited hardback edition, and a paperback edition. But that was later.

For now, it’s just a single hardback album, and it’s even printed in Denmark. 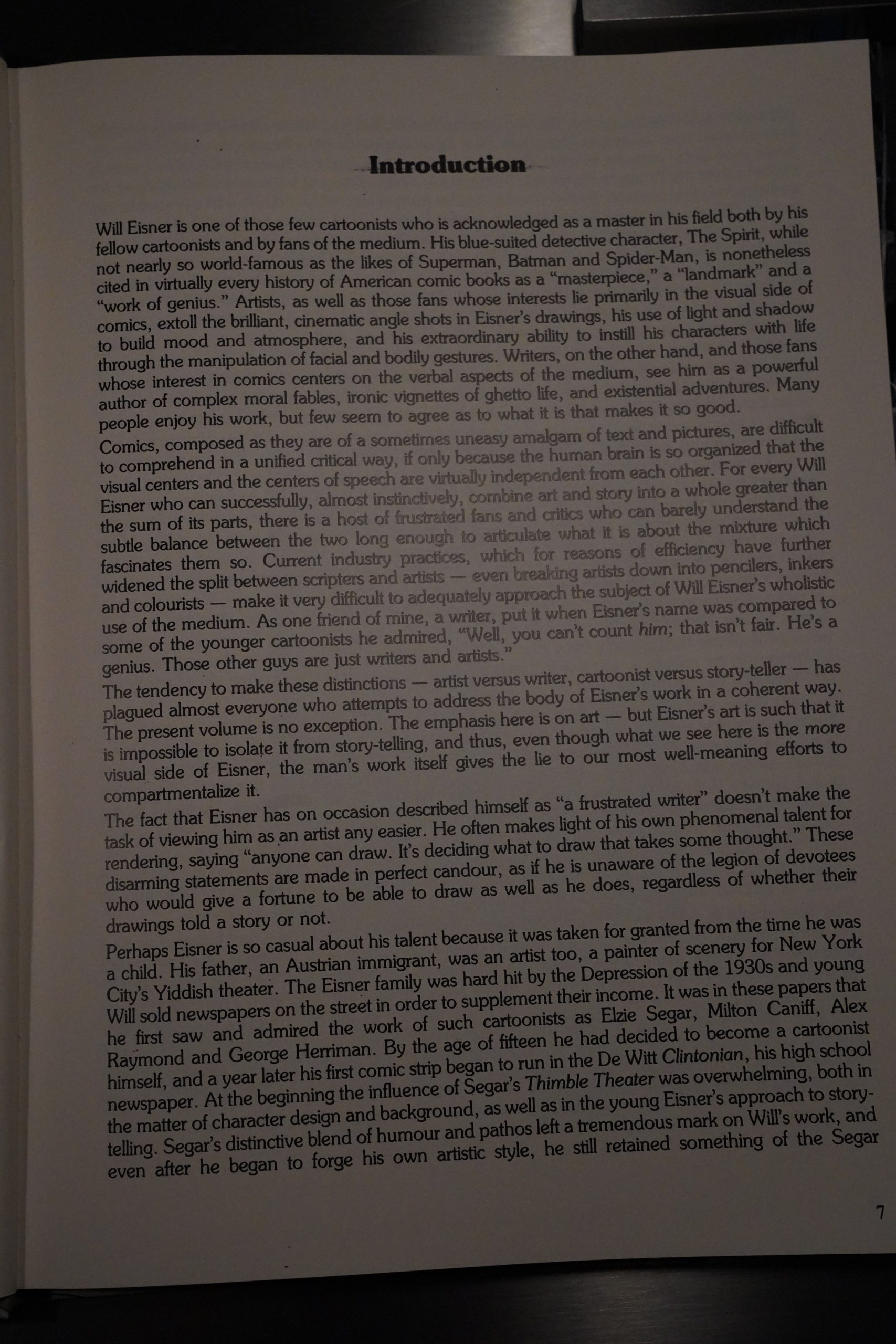 Catherine Yronwode (who worked as Eisner’s assistant at the time) writes the introduction and gives a historical overview of Eisner’s career in very straightforward terms.

I was a bit sceptical towards this book — it seemed like such a strange, hodge-podge of things. First we get a Spirit story from 1947, and it’s been recoloured — or rather, re-painted “by hand”, as Yronwode puts it. She didn’t specify who painted the colours, but I assume it’s Eisner himself. I’m guessing that this story was chosen because it would be fun to apply painted colours to? 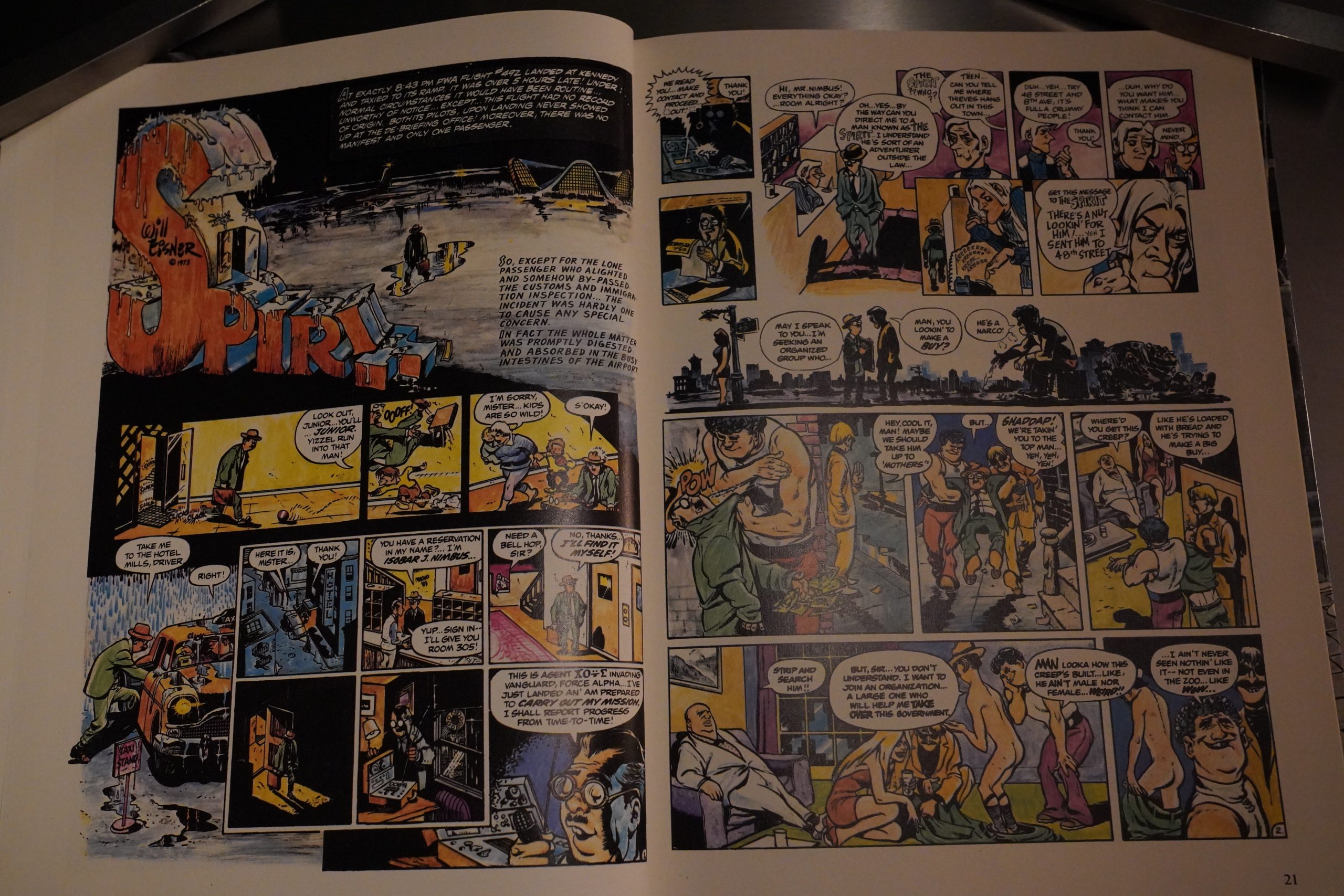 Then we get a five page Spirit story from 1974, which was originally printed in tabloid size (so it’s shrunk down a bit here.) 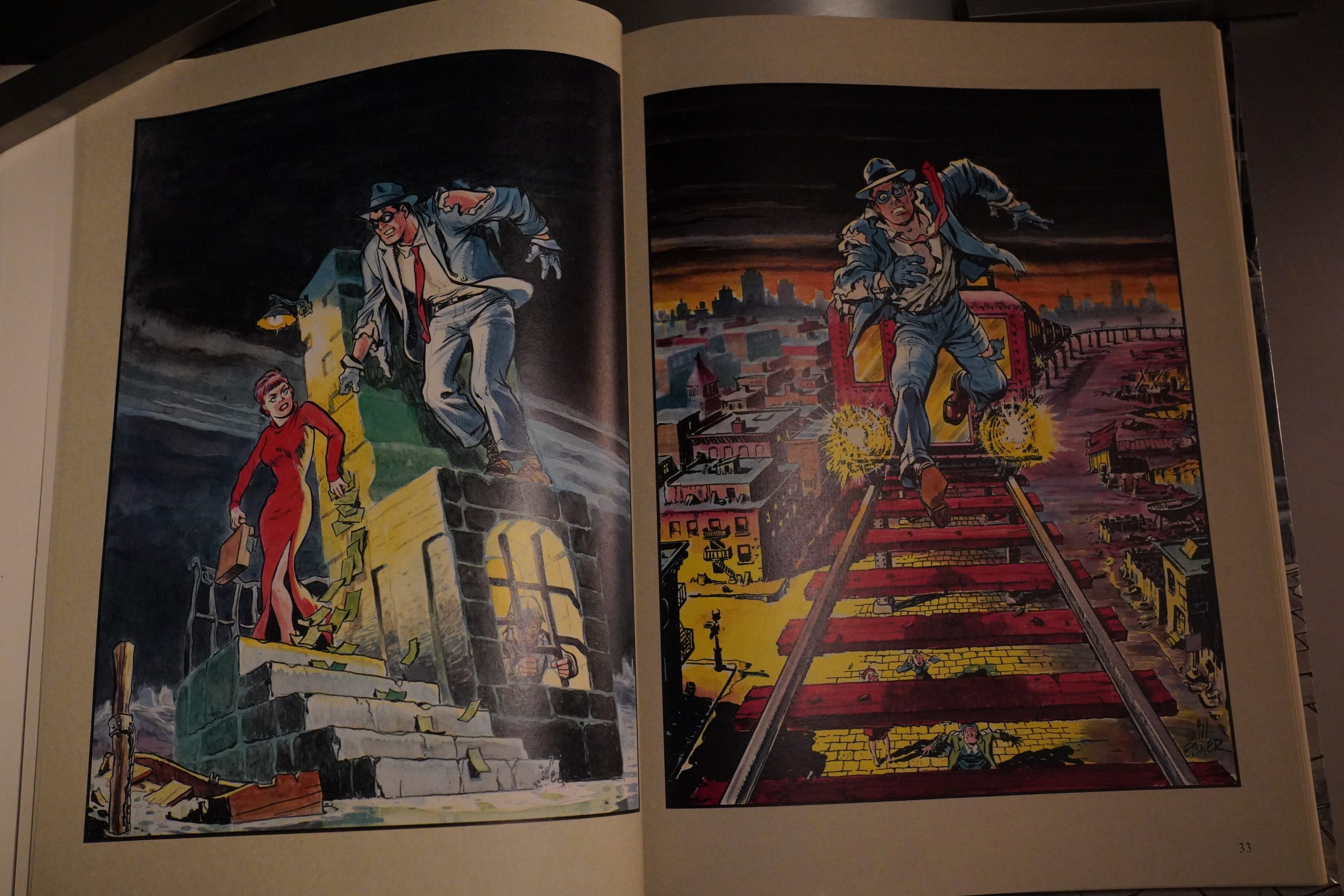 Then we get a whole bunch of covers that were originally done for the Warren Spirit magazine — these had originally been painted (from Eisner’s pen and ink artwork) by other artists, but here Eisner redoes them from his own artwork. 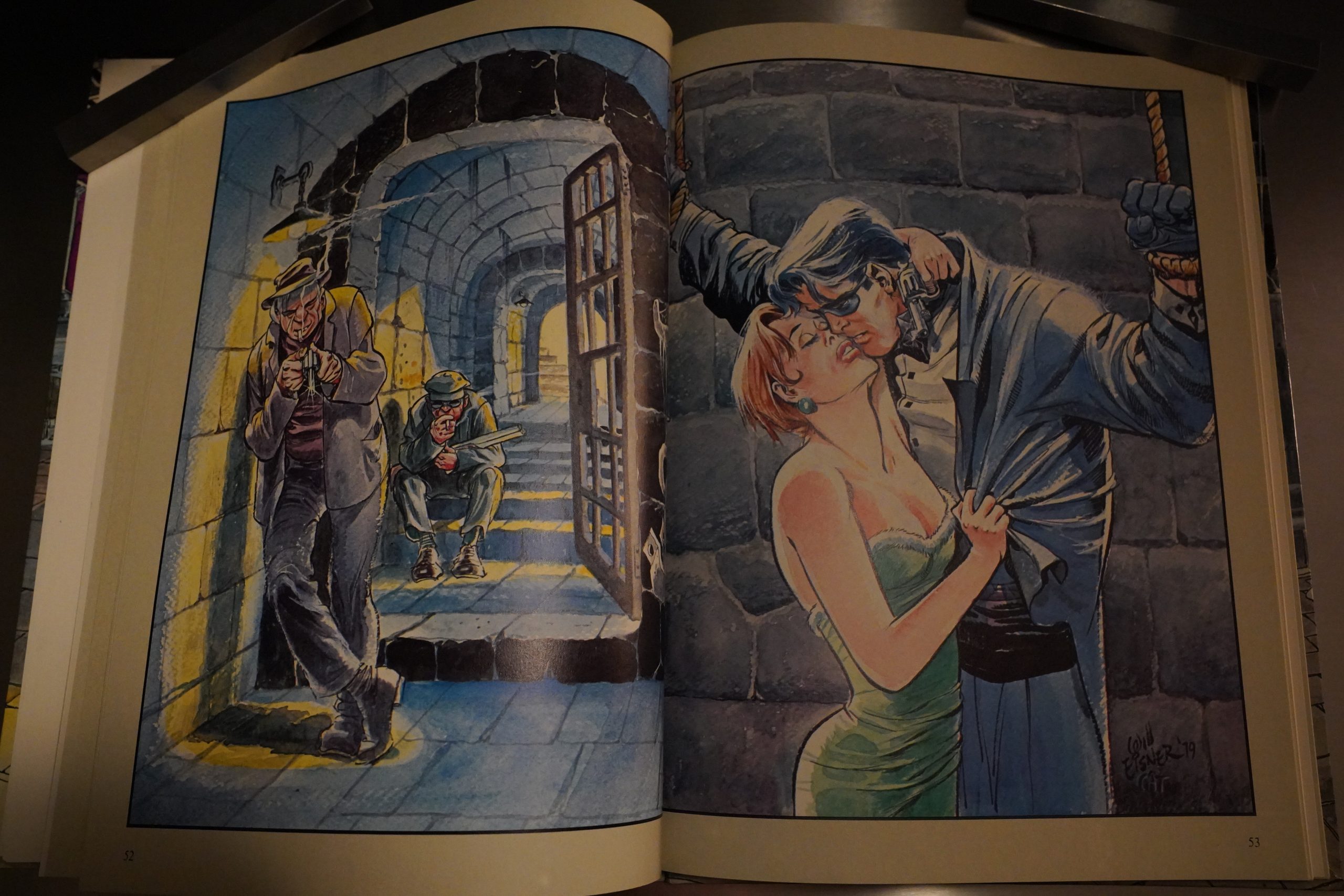 Then we get a reprint of a bunch of covers for the Kitchen Sink Spirit magazine — but without the cover text, which is pretty cool. However, the tight gutters aren’t kind to some of these wrap-around covers… 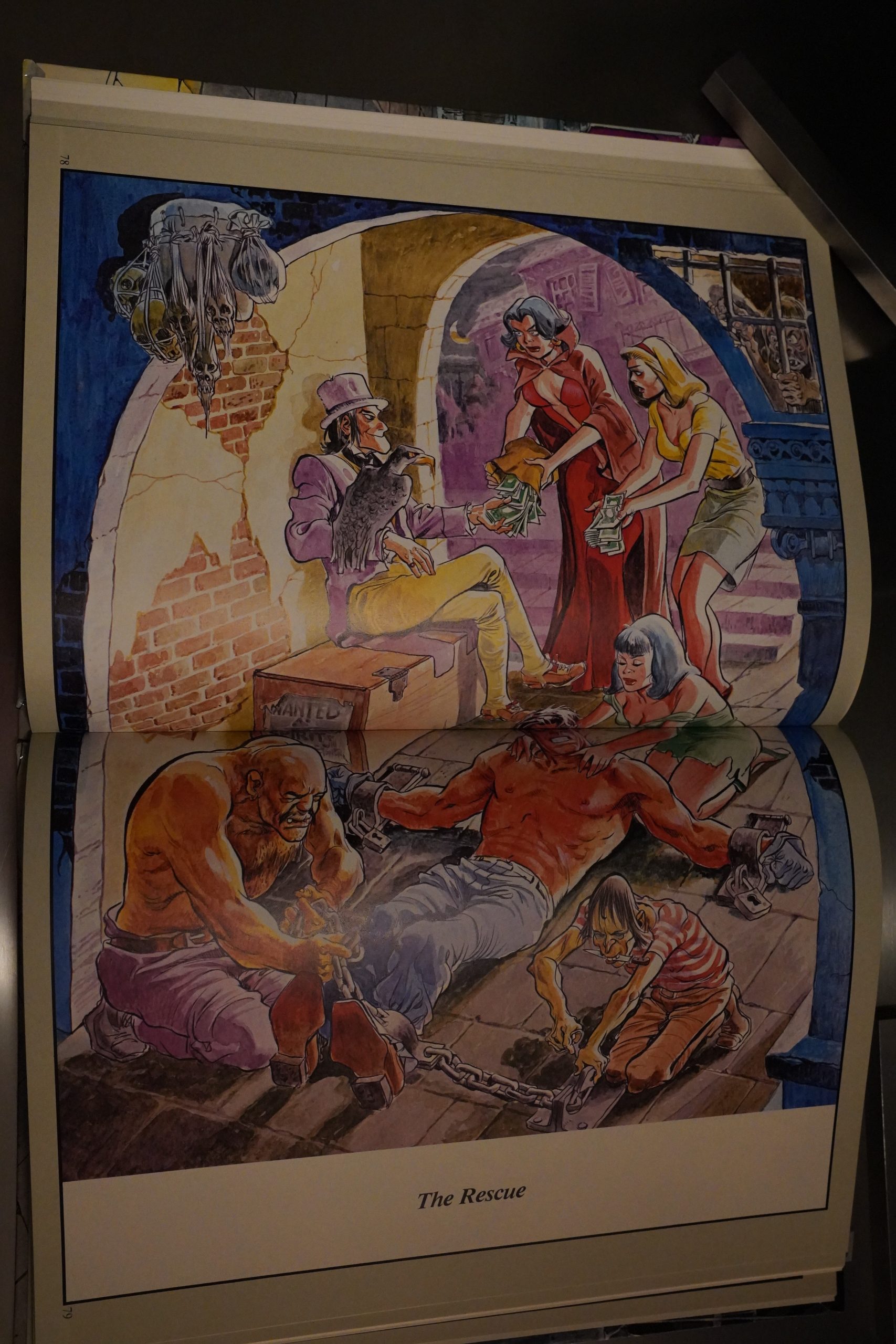 … and even less so to the portfolio (done in the late 70s) that’s reprinted here.

But I guess Kitchen got this book printed in Denmark because they could do full colour (as opposed to four colour) reproductions?

This thing really is a treasure, though: I was prepared to be underwhelmed, but it’s a really amiable walk through a bunch of nice Eisner artwork. Yronwode’s unpretentious texts help a lot here with the enjoyment: I’ve read so many books like this that have been ruined by gushing, over-the-top text pieces, but Yronwode gets it completely right, as usual.

It feels pretty special, and it’s a fun thing to read.

This is the fifty-ninth post in the Entire Kitchen Sink blog series.