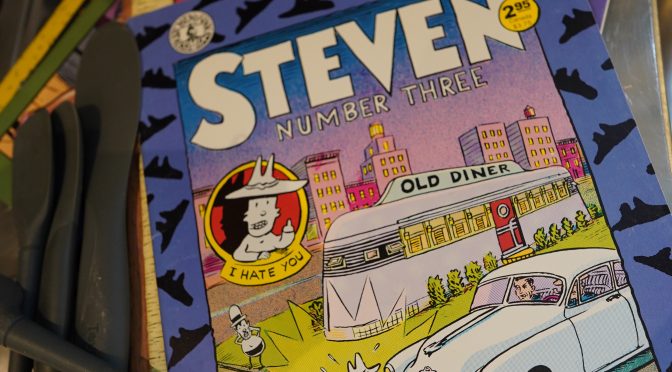 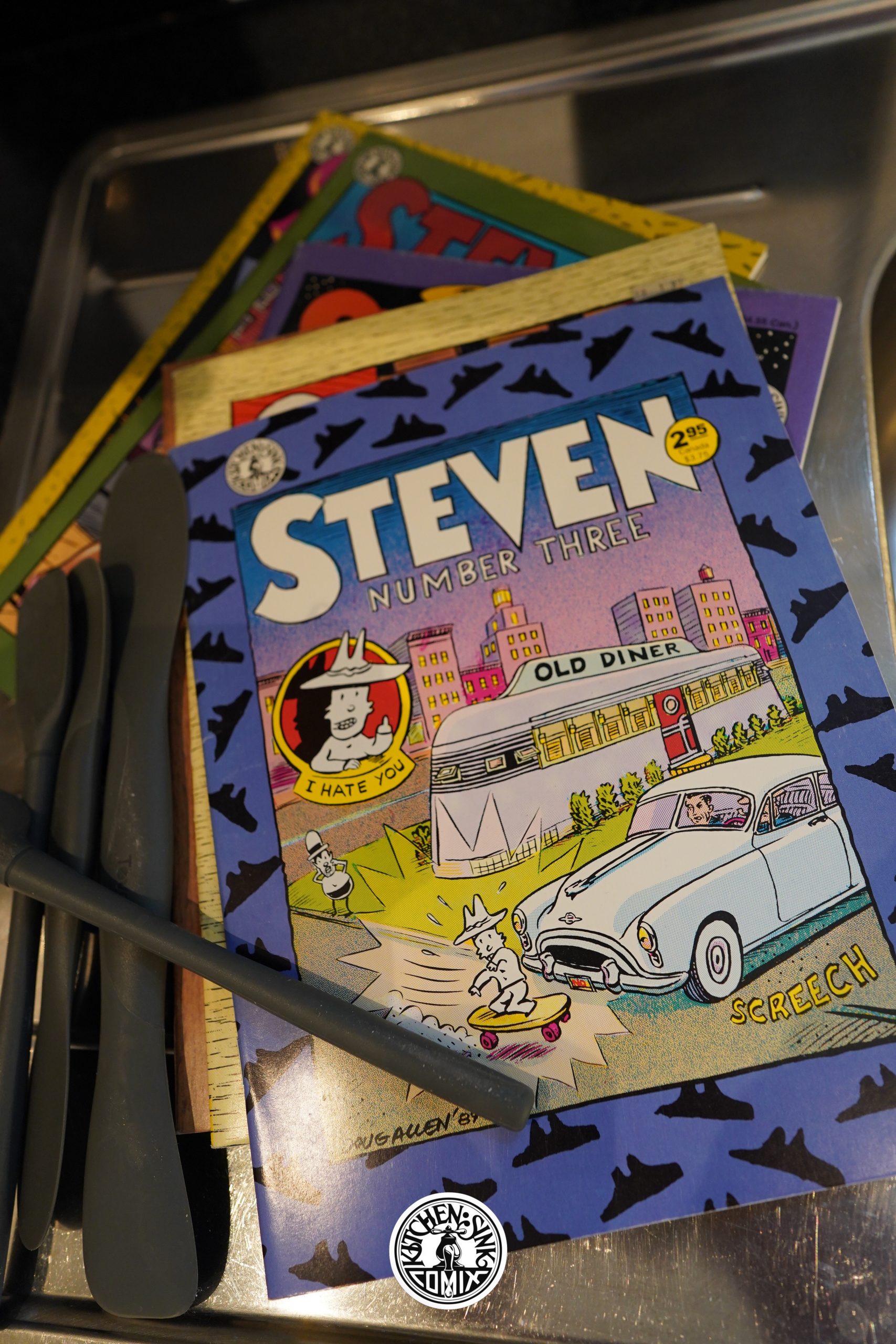 I had the first issue of this book as a teenager, and I remember really disliking it. Which is a bit odd, because it’s adjacent to many strings that I really enjoy. Let’s have a look at these books and try to unravel the mystery. 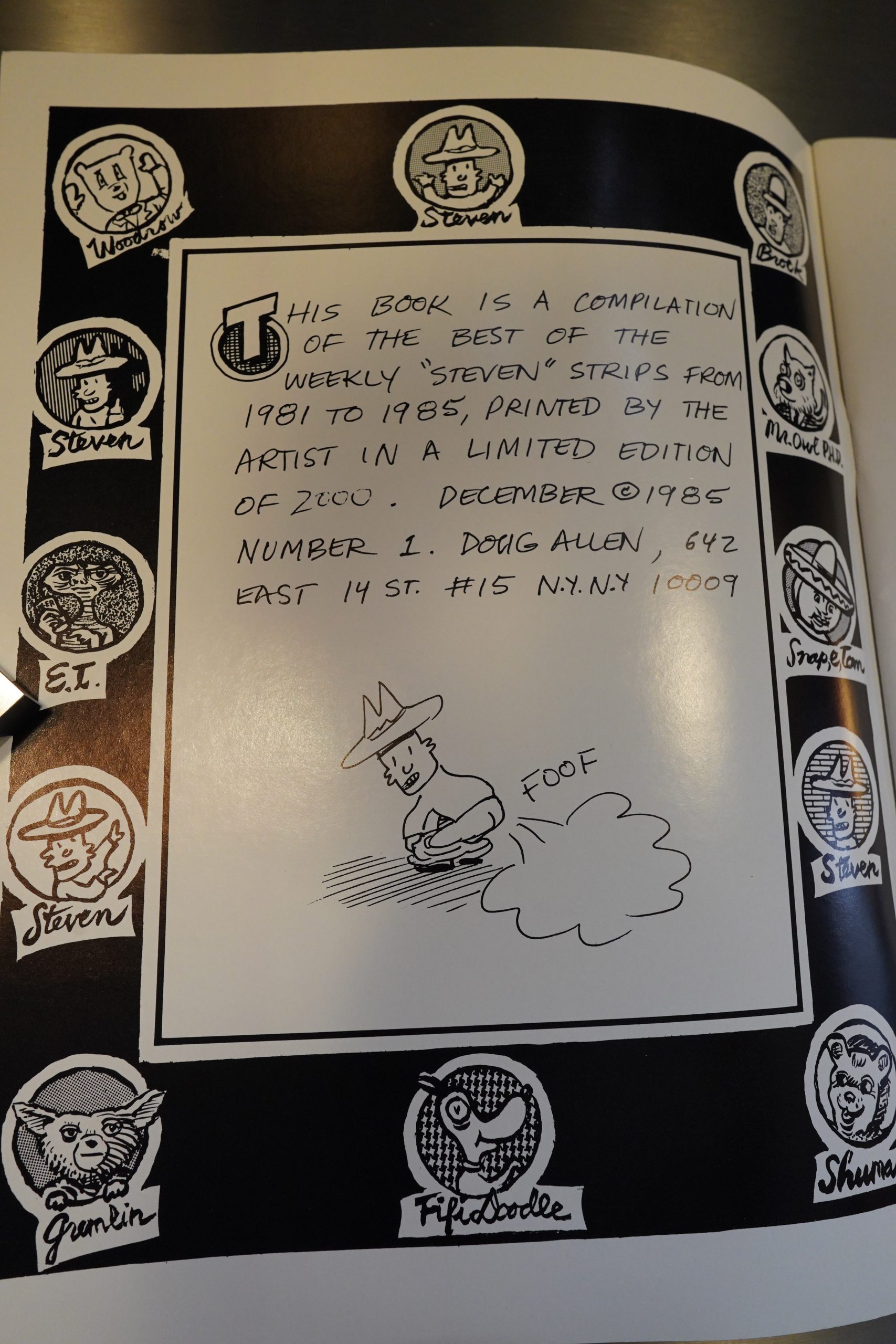 The edition of the first issue I have here is the original, self published one. Kitchen Sink would later reprint this issue and then carry on the series. 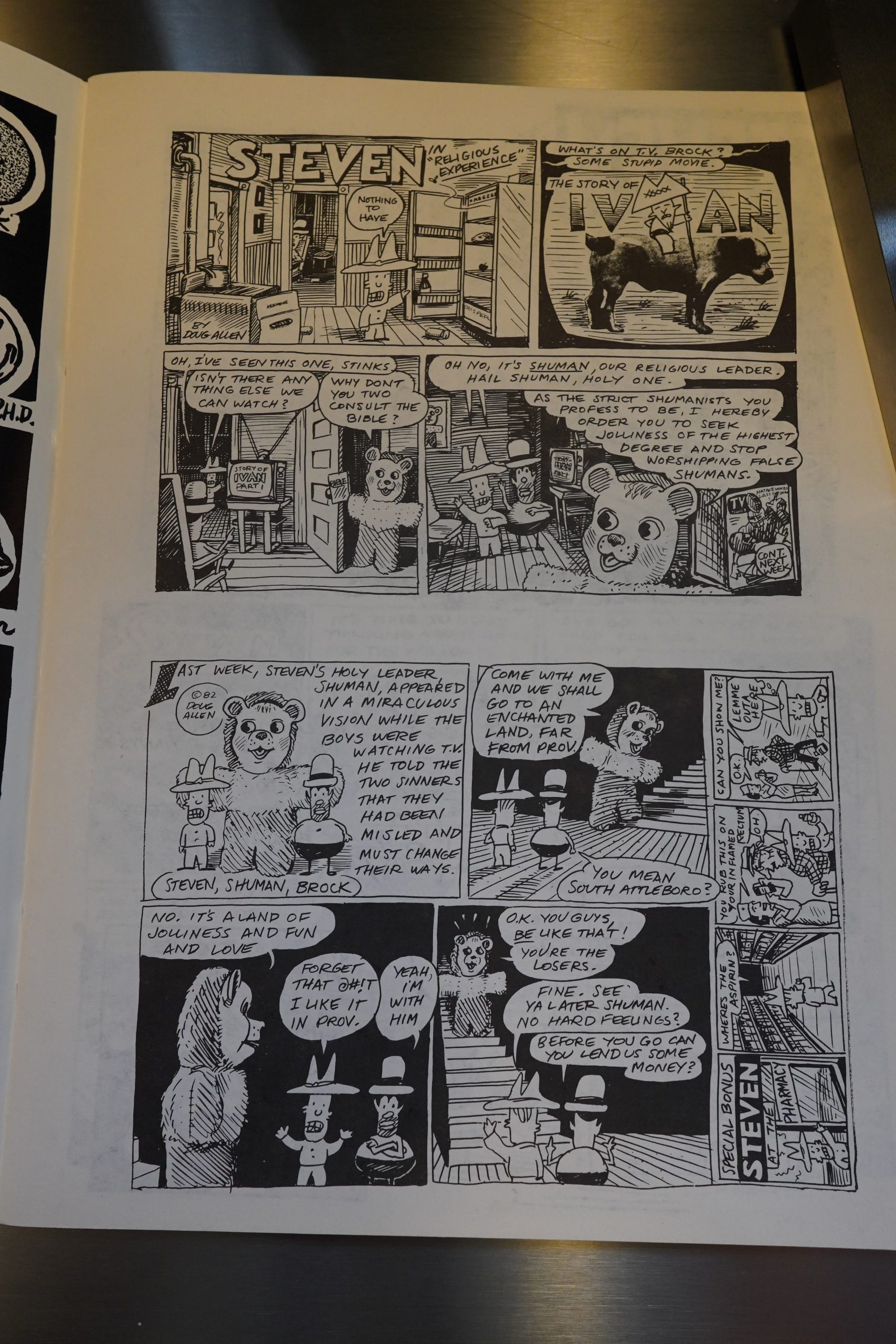 The first issue reprints a “best of” selection from 81-85. 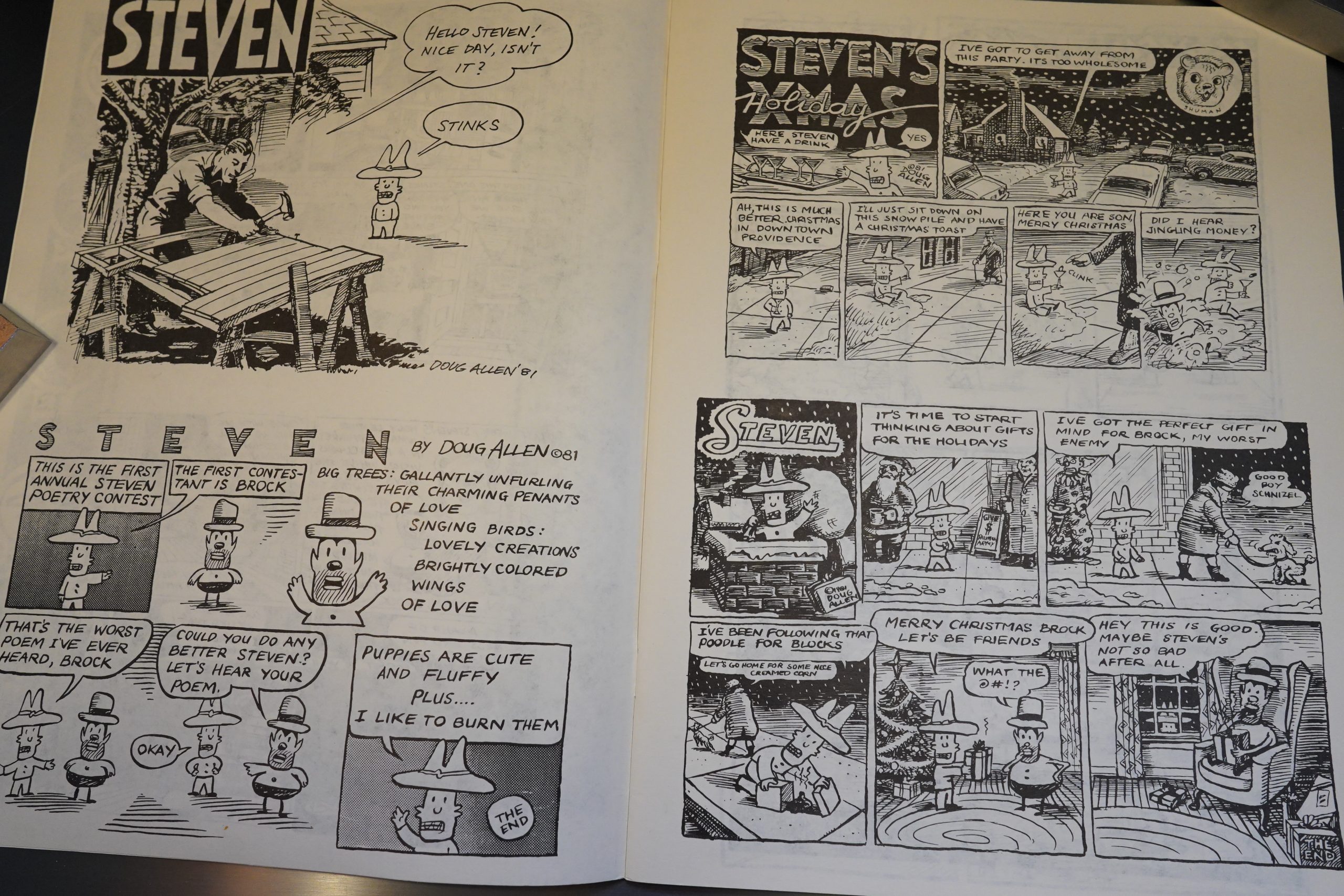 There’s a lot of different approaches, but it’s mostly the Steven character whining about something or other. 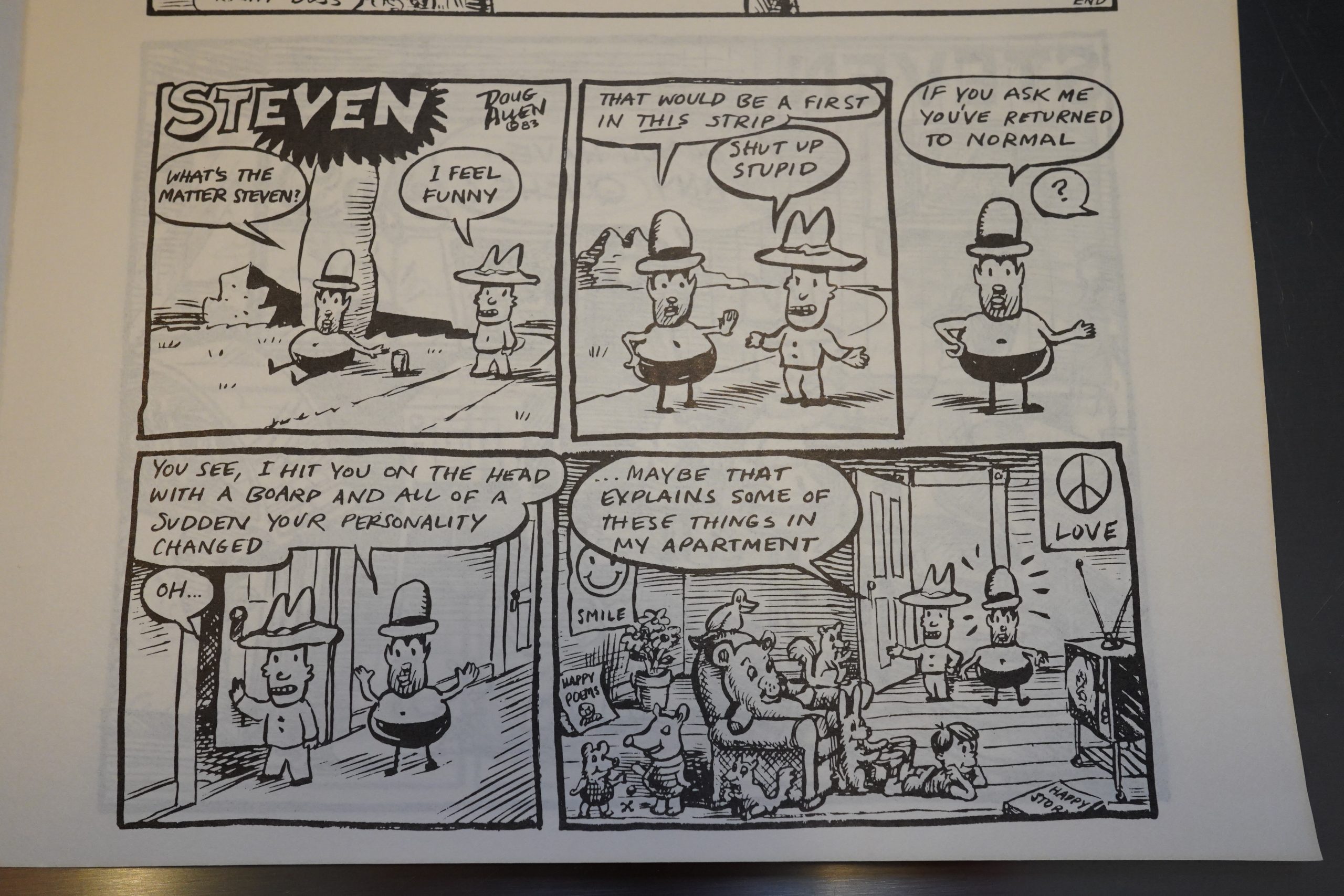 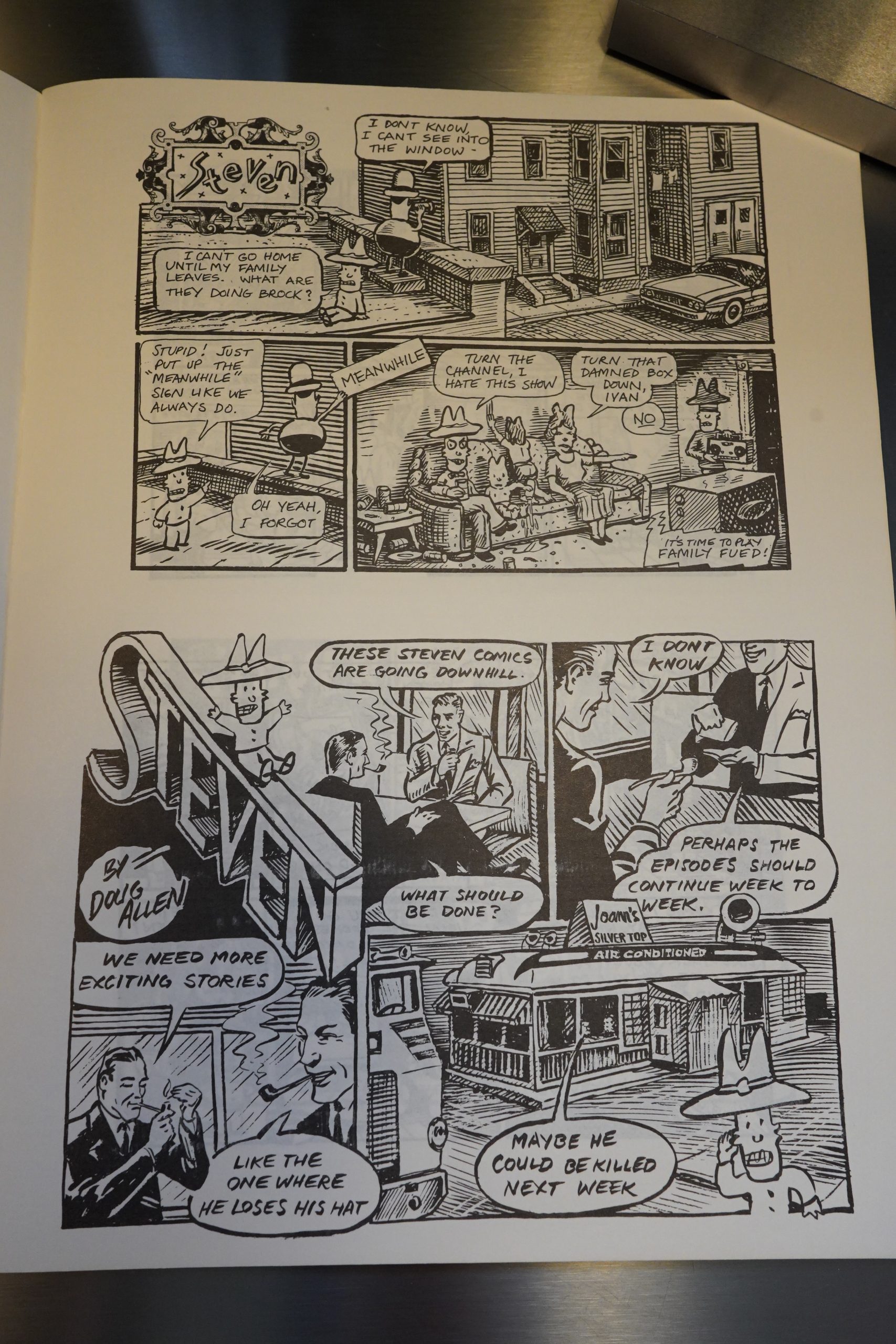 Quite a few of the strips here are about not having an idea for making a strip, which is a common enough trope, but it just feels so… low effort here. 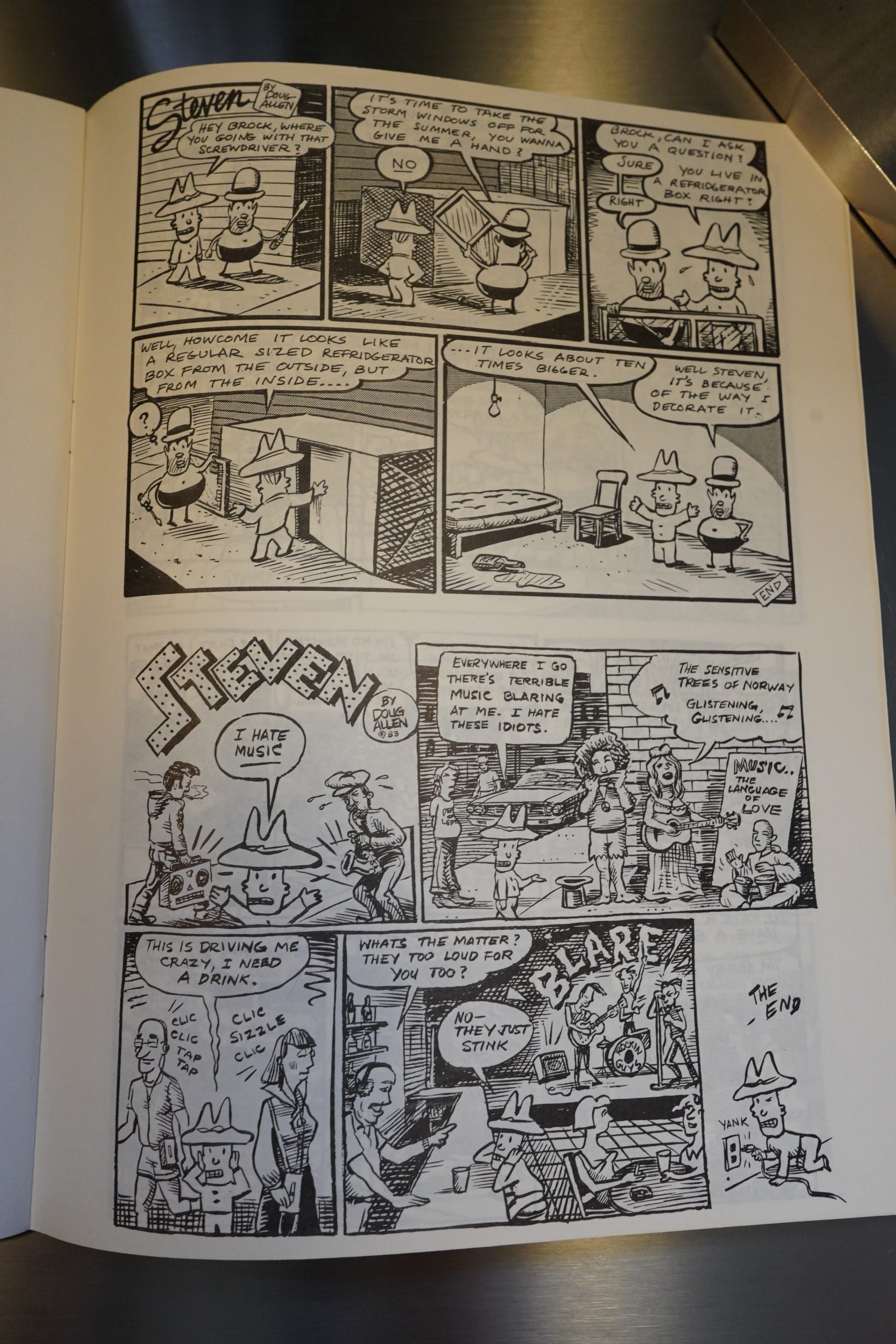 Perhaps I just disliked this strip as a teenager because it sucks? How’s that for insightful analysis.

Two typical examples: A totally hackneyed joke masquerading as Zippy-esque absurdity on top, and on bottom, we have a typical “that Steven guy sure is ornery” punch line free strip. It’s lazy and it’s boring and now I’m dreading reading the rest of the series (which I did not buy at the time, for obvious reasons). 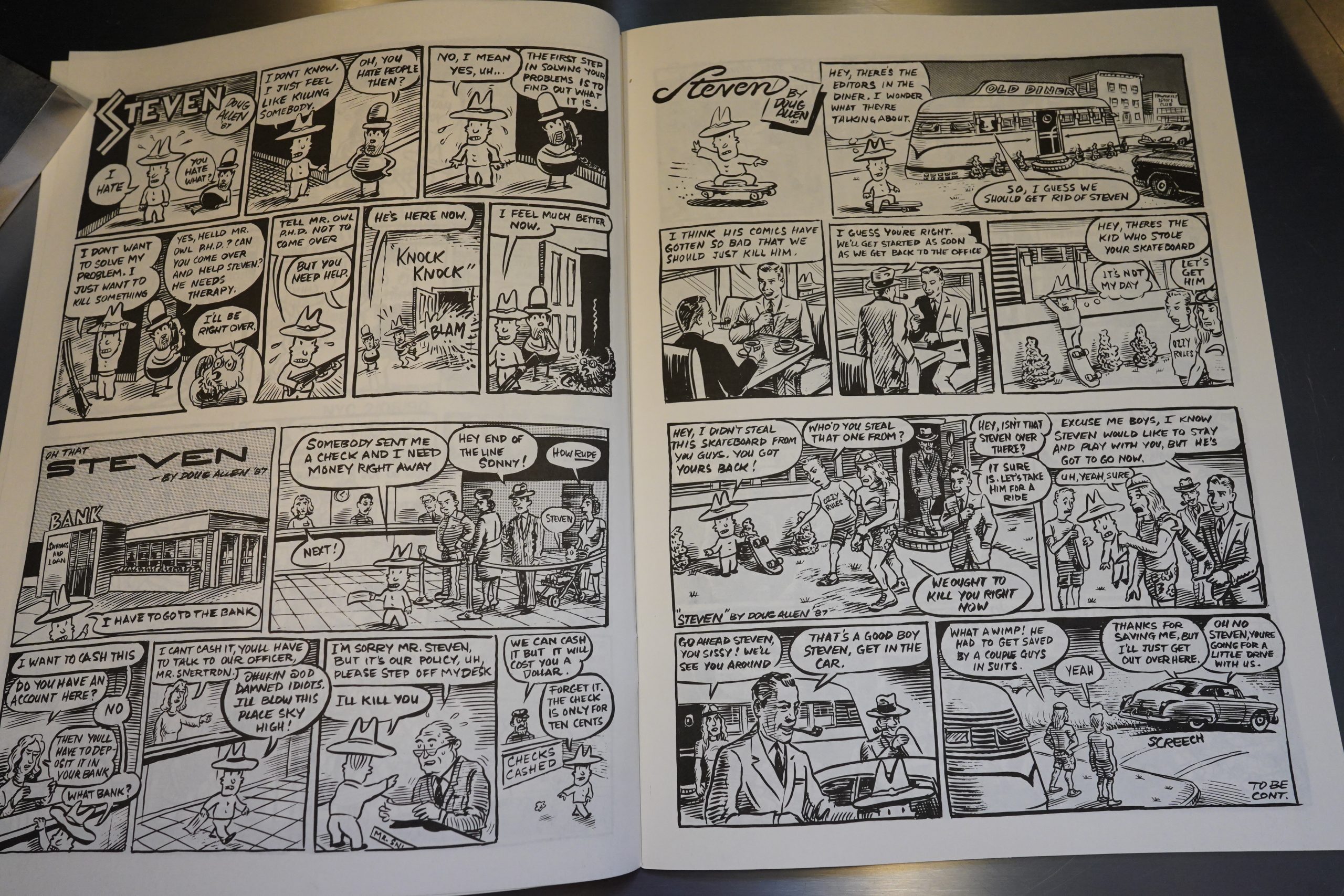 Well, Allen’s line gets fuller and more accomplished, and storylines start to develop, so that’s an improvement. 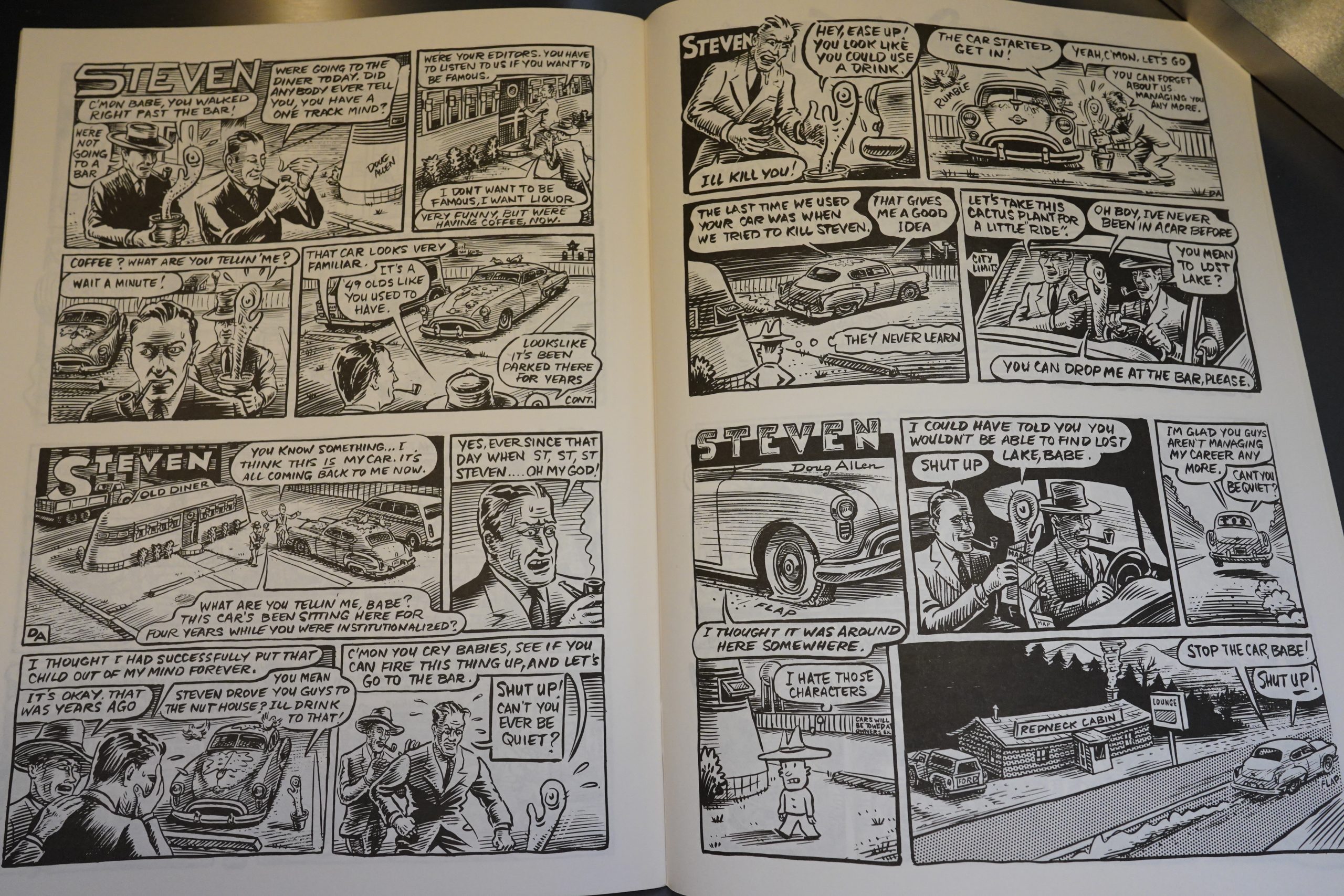 But I just have zero interest in this, so I started skipping while reading these issues. 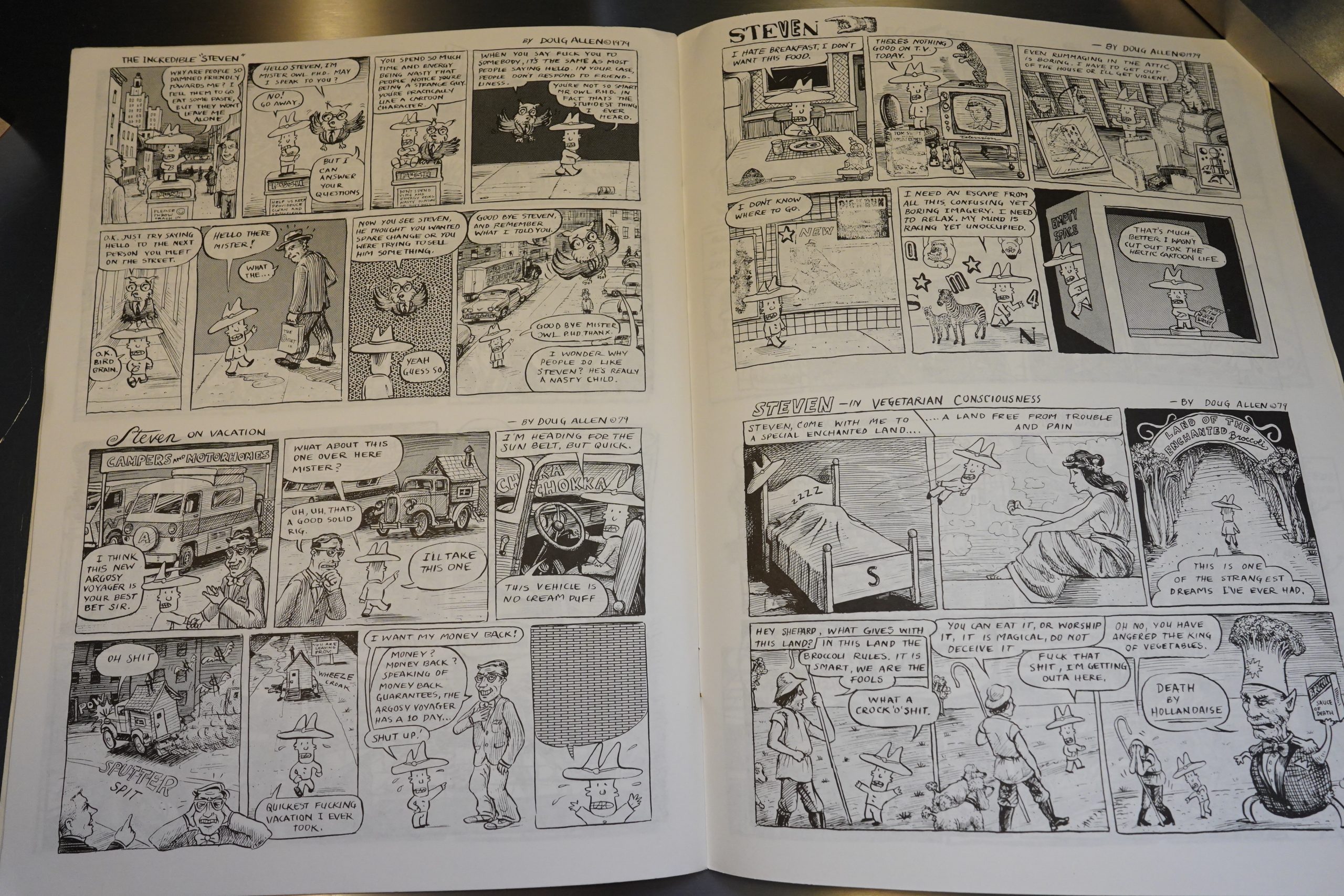 In the seventh issue, we get some strips from the 70s, which are more interesting graphically. 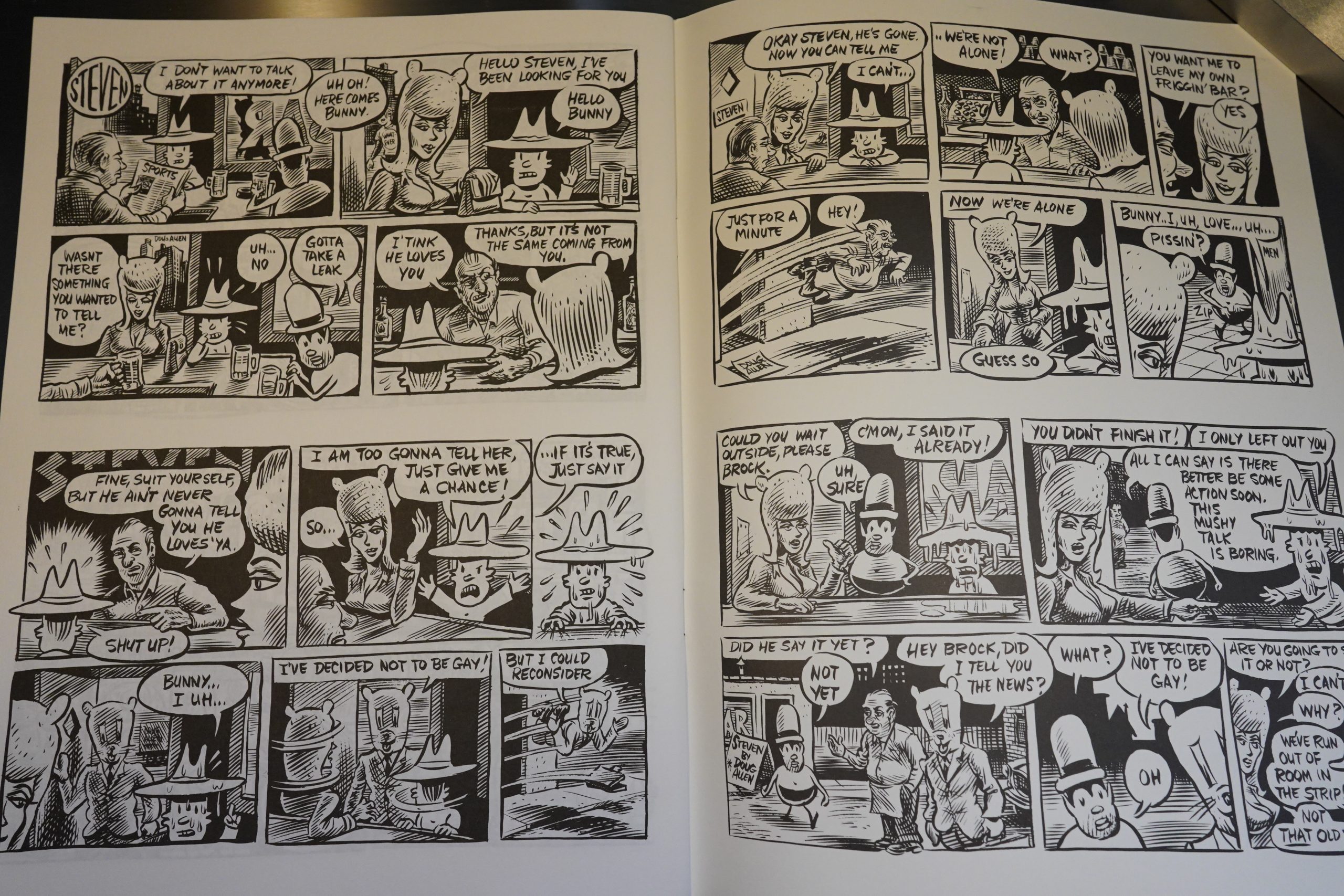 And then, finally, the series is over and I don’t have to read more.

I still don’t know why my antipathy towards this series is so strong — it might just be me. 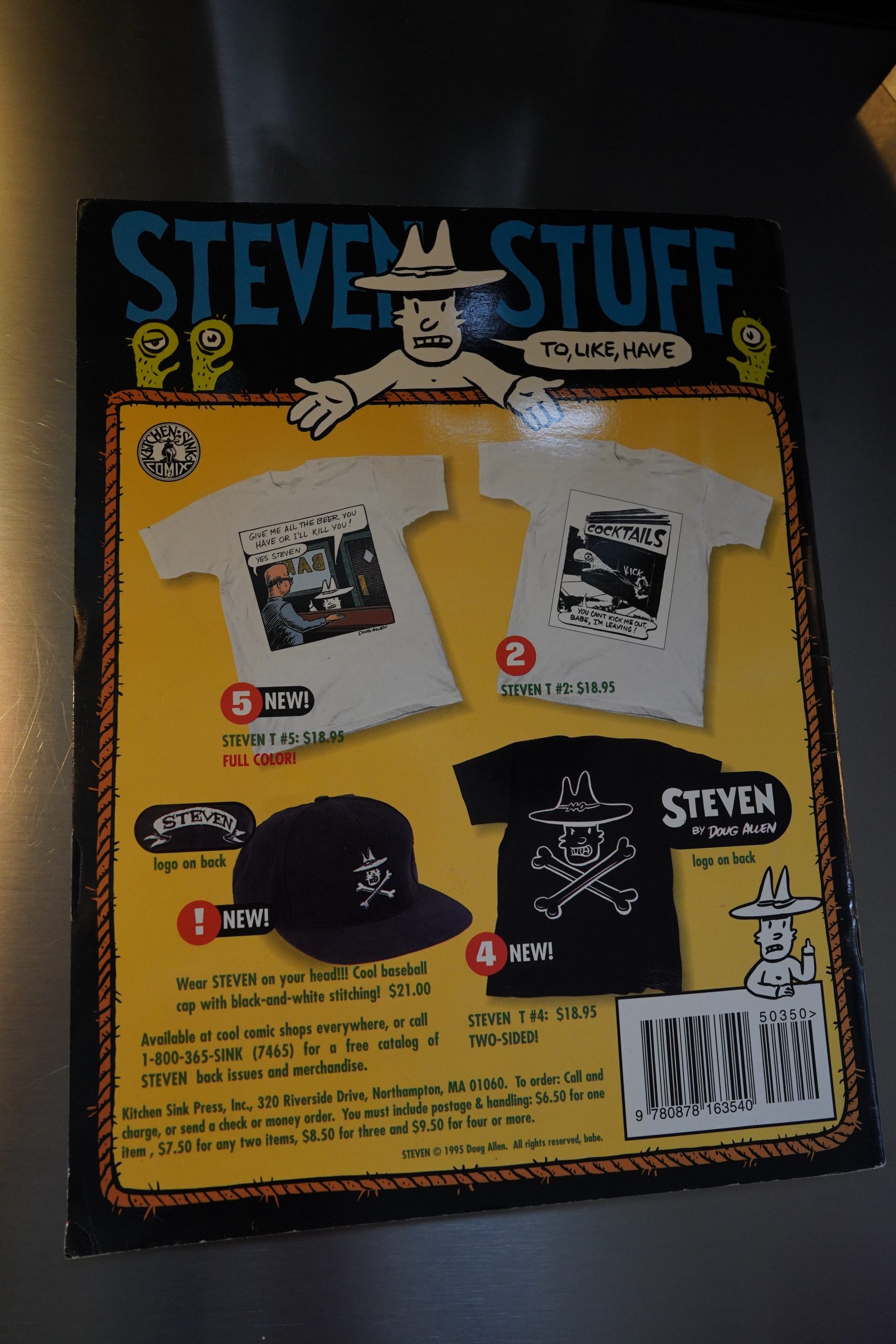 Because the series was popular at the time — it ran for almost two decades, which is a lot for an alternative comic strip.

I stopped reading Doug Allen’S Steven When I
moved from Chicago and was thus no longer able to
follow the adventures of comics’ favorite pre-teen
alcoholic misanthrope for free in a local weekly. I
was kind of glad I got out when I did; the last
plotline I can recall involved the dipsomaniac plant
(“Gimme some sauce, babe.”) doing the “Alice in
Wonderland” growth thing.
Steven #7 makes me wonder what been
missing. A strong collection combining a run of
strips from 1993 and the usual Steven rarities from
long ago, this latest release from Kitchen Sink finds
Allen hitting his stride all over again.
Despite its really rough, over-the-top humor
(One extended sequence involves Steven running
around happily shooting the supporting cast),
Steven owes a lot to classic comedic strips and
movies. The motivations Of the characters are so
pure and simplistic that the outcomes are inevitable;
getting there is all the fun. Steven is such a strong
character, with a bottomless pit of ha-
tred to draw from, that he needs a num-
ber of antagonists to balance him out.
This suits Allen perfectly; he’s a master at creating
character out of variations on annoying behavior:
the pompous Mr. Owl Ph.D., the simpering boob
Woodrow, the self-important Fifi Doodle… Steven
is the kind of strip where everyone who reads it has
a personal favorite.

STEVEN #4
BY DOUG ALLEN
MCHEN SINK PRESS
No obsessive consumer in the history of comic strips
can match Popeyés hamburger-rm»ching Wimpy, but
Steven’s dipsomaniac Cactus plant is closing the gap.
Wheedling non-stop in its peculiar alkie jargon
C •C’mon, Steven, howsabout a little sauce.. the
plant cadges drinks out of friends and Strangers,
responding with shocked disbelief anytime its crav-
ings are thwarted. An ongoing plotline of Steven has
concerned the tussle between the title character and
his co-stars for control Of the strip; no one seems to
notice that the cactus plant stole the strip long ago
— except for Doug Allen, who hands the plant the
cover, relegating a fuming Steven to a small corner
vignette. The funniest comic book of 1991.

This is a comic bookcollection of the
comic strip, Steven. Steven was one of
the first alternative weekly strips that
sprang up during the early ’80s. Un-
like Life in Hell and Ernie Pook’s
Comeek, Steven was never wildly
successful. This isn’t an injustice,
though—Steven just isn’t as good as
those strips. Despite this, I’d say that
Steven is well worth reading. In style
and attitude alone, it is far more ad-
venturous than the average comic
book.
Steven will remind you of other
comics. Many of the characters have
a perverse cuddliness in them in the
same way that Rory Hayes’s did. The
crudeness and resolutely anti-social
quality of the strips bring to mind
Mark Beyer. The weird imagination
of some of the strips made me think
of Jim Woodring (especially) the panel
where the man and his frog are mow-
ing the lawn together) Bill Griffith’s
frog strips are recalled, and the draw-
ing style is similar to both Lloyd
Dangle and Michael Dougan.
I prefer all these similar works to
Steven, frankly. Steven can be fun, but
it’s ambitions and intentions seem just
beyond its but not
great.
I will give Doug Allen credit for
coming up with what is, in the context
of the strip, a curiously mild (but
funny) put down: “Go eat paste!”
GRADE: ! ! ! ½

This is the one hundred and ninth post in the Entire Kitchen Sink blog series.