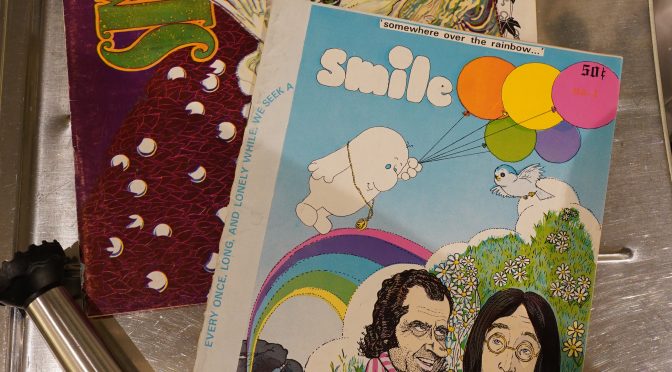 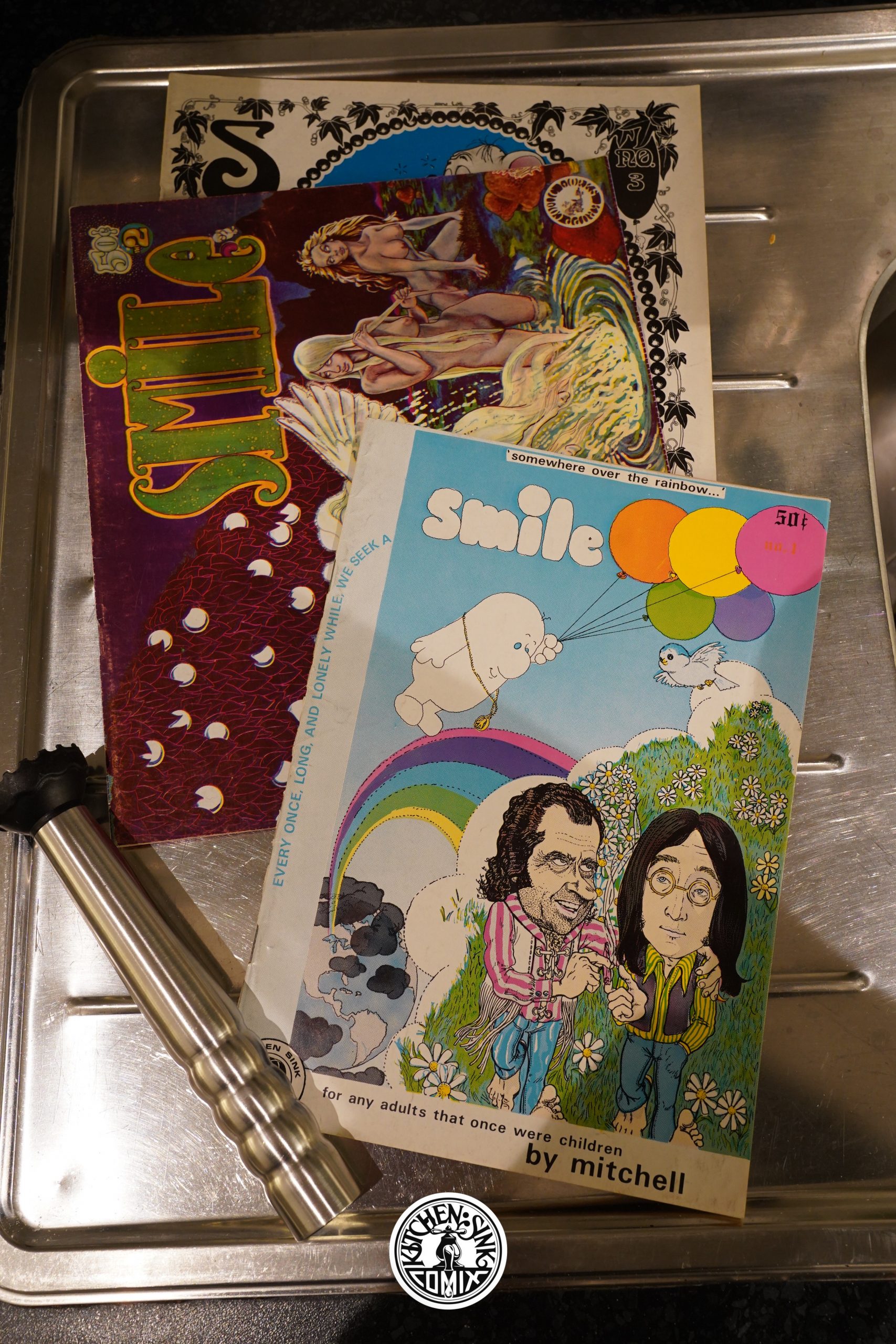 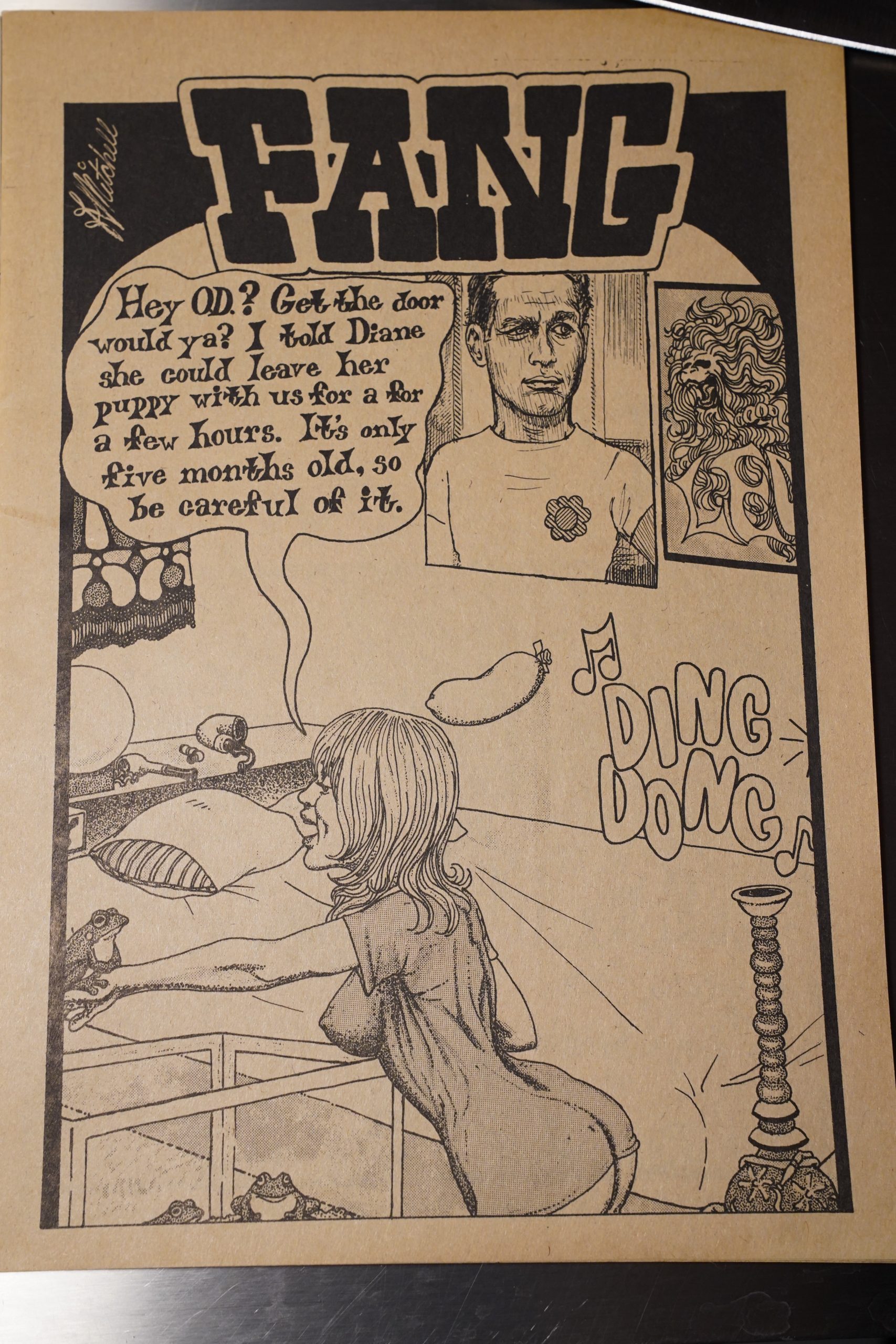 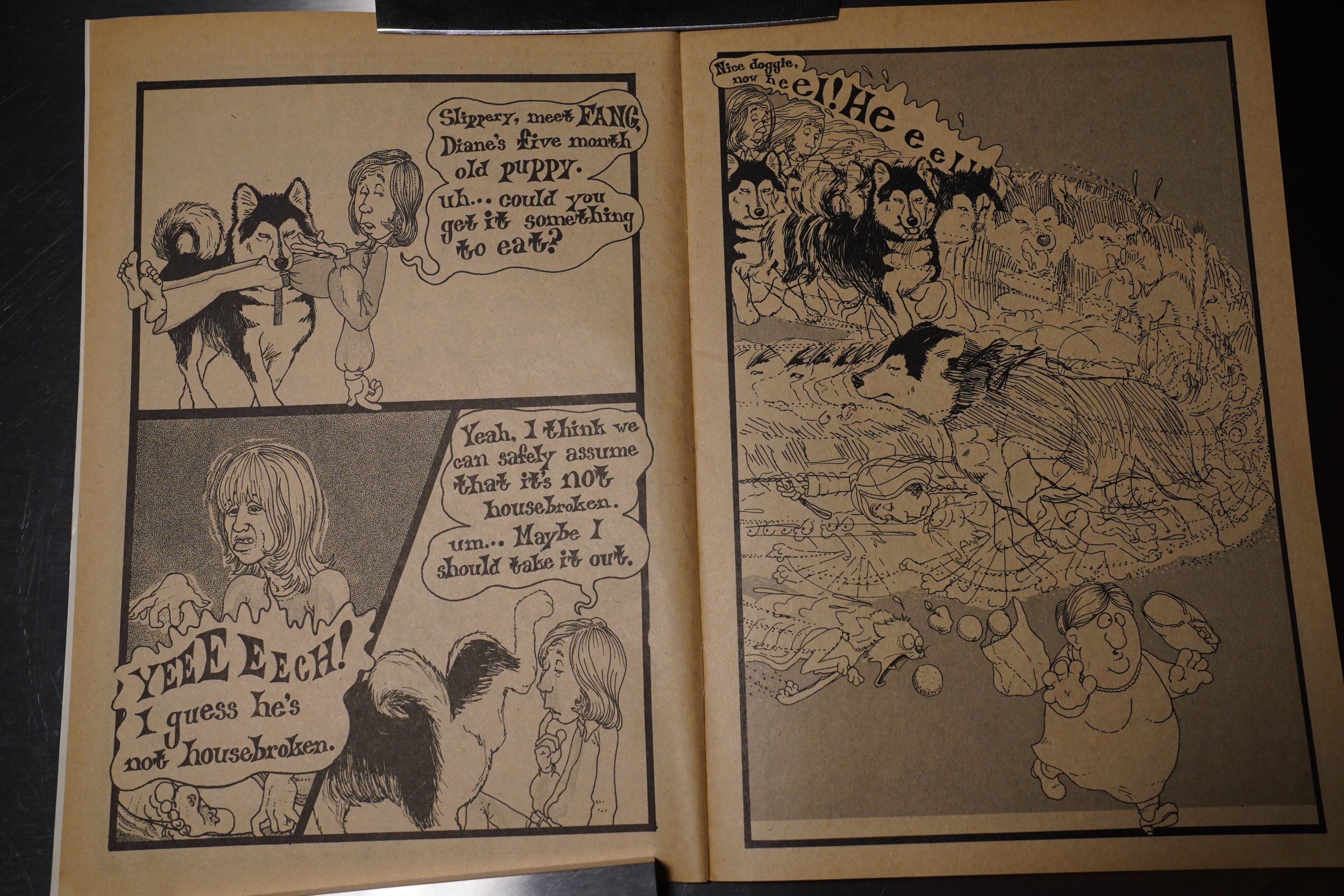 It’s pretty good? I leans heavily into a 60s Mad Magazine aesthetic, though. But with more drugs. 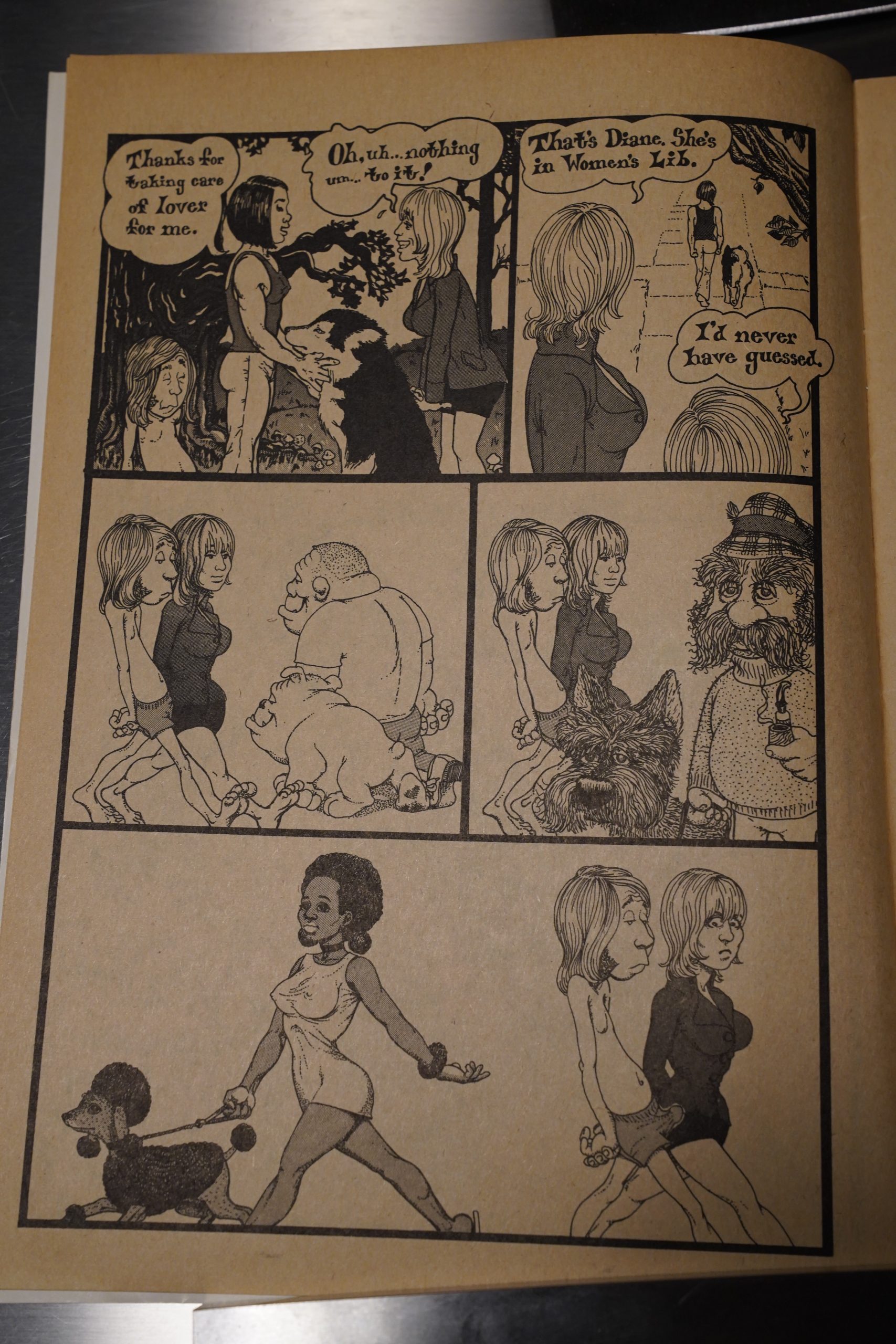 And slightly more sex, but not a lot. 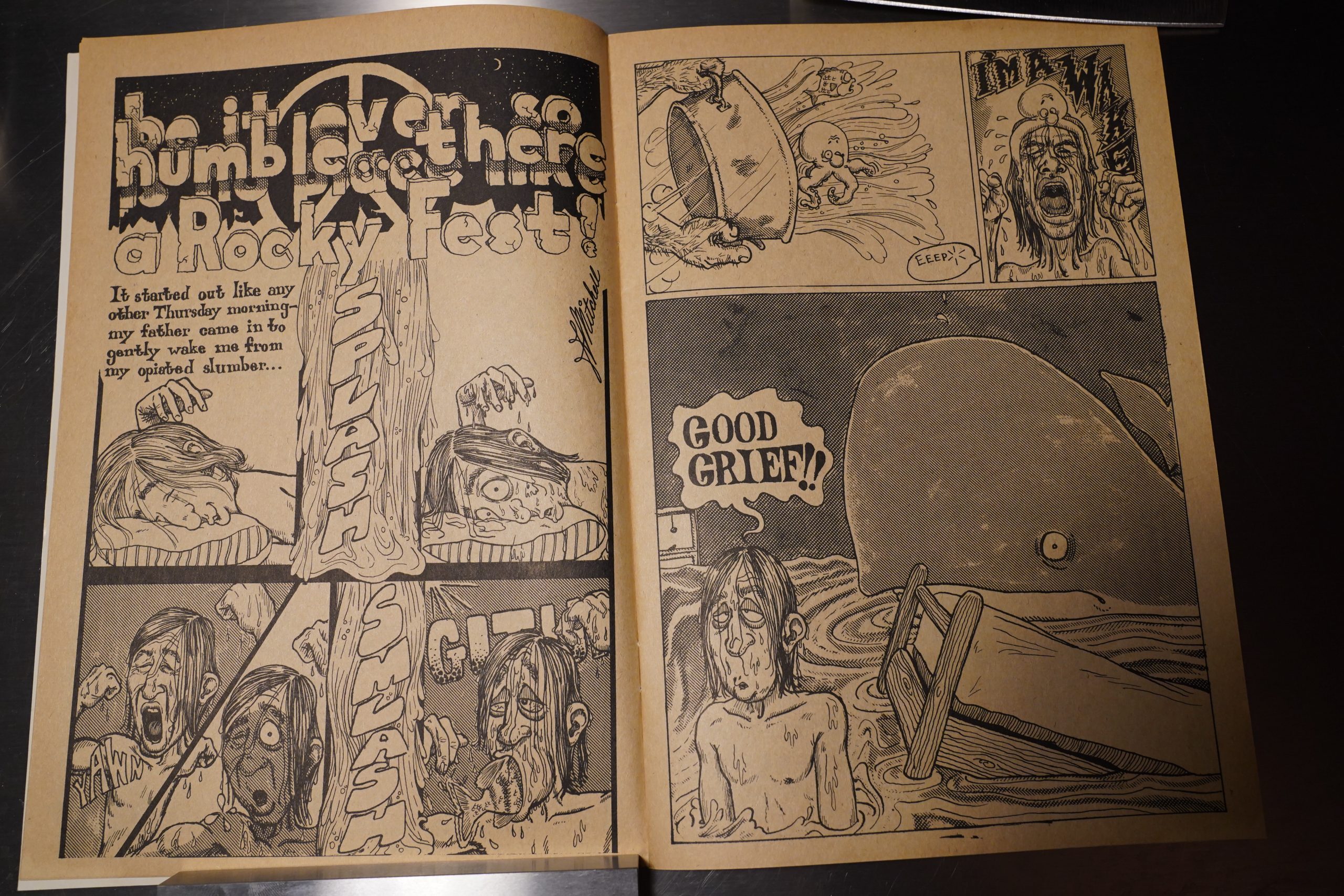 This is probably the best sequence in the book: The escalation is just about perfect; getting more absurd by the panel. 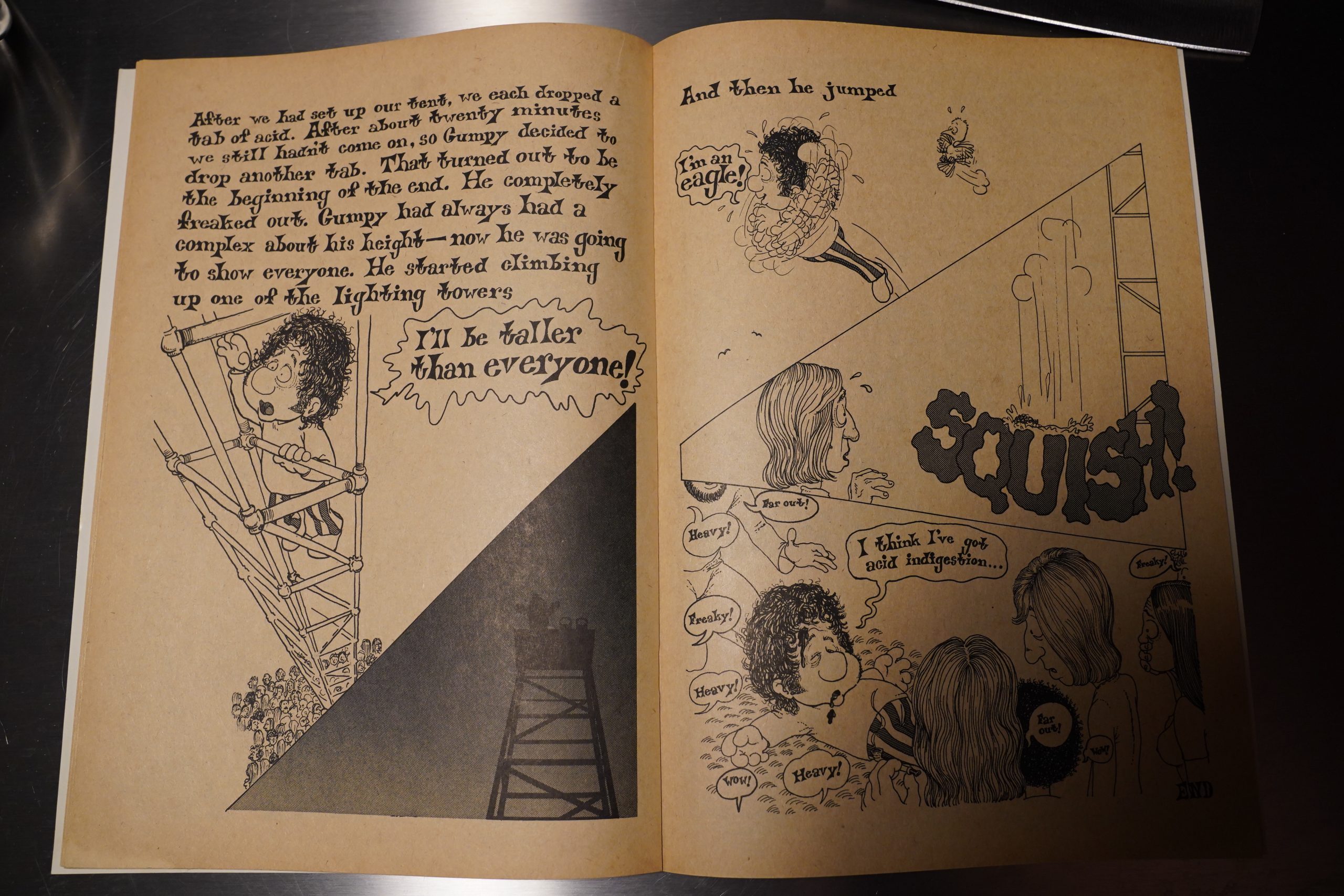 Most of the strips are drug related, but the plots are often what people will come up with without having any drug experience, like this kid-on-acid-jumping-to-his-death thing. It’s a bit odd. 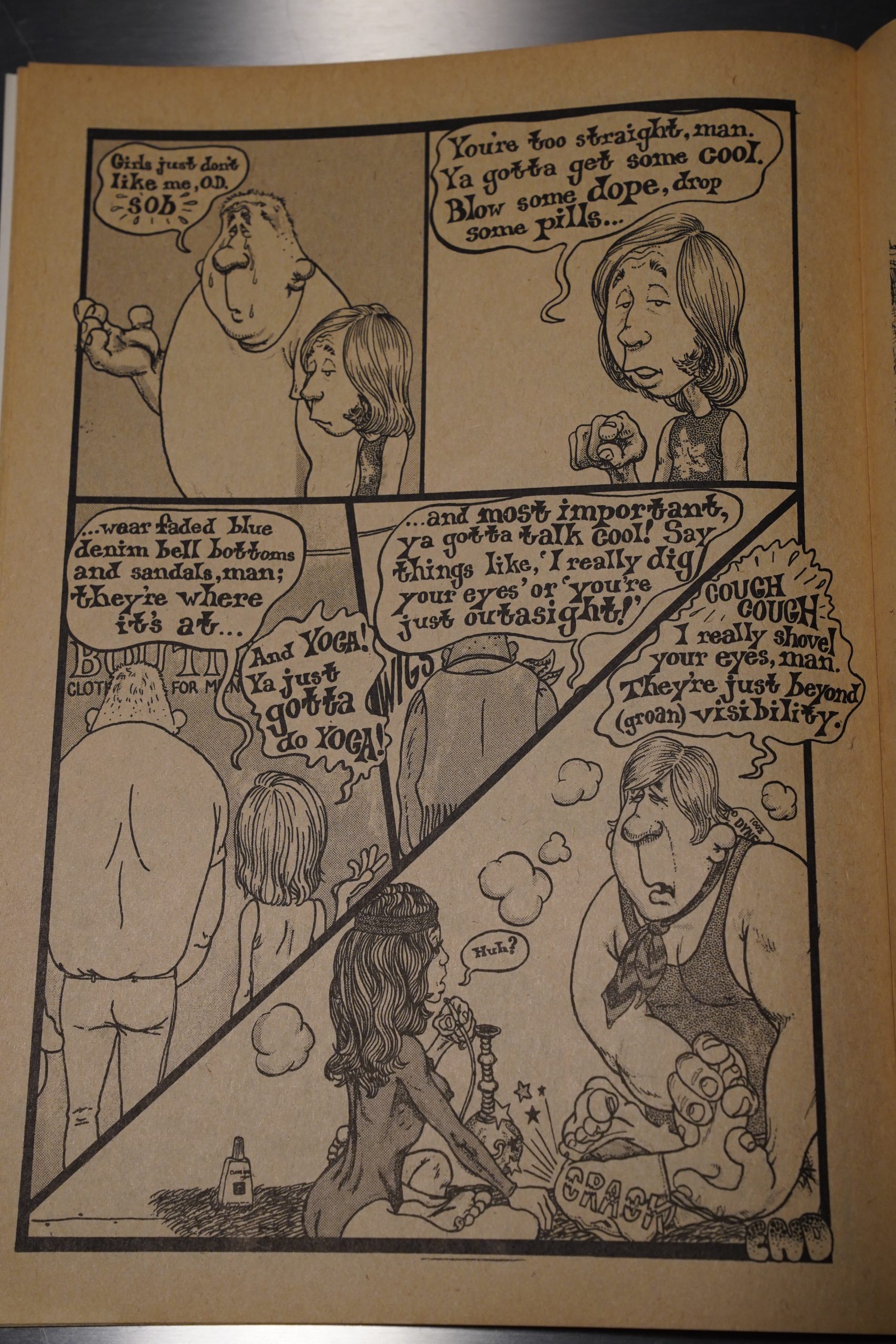 And this “how to become a hipster” thing is amusing, but again — it seems kinda square? 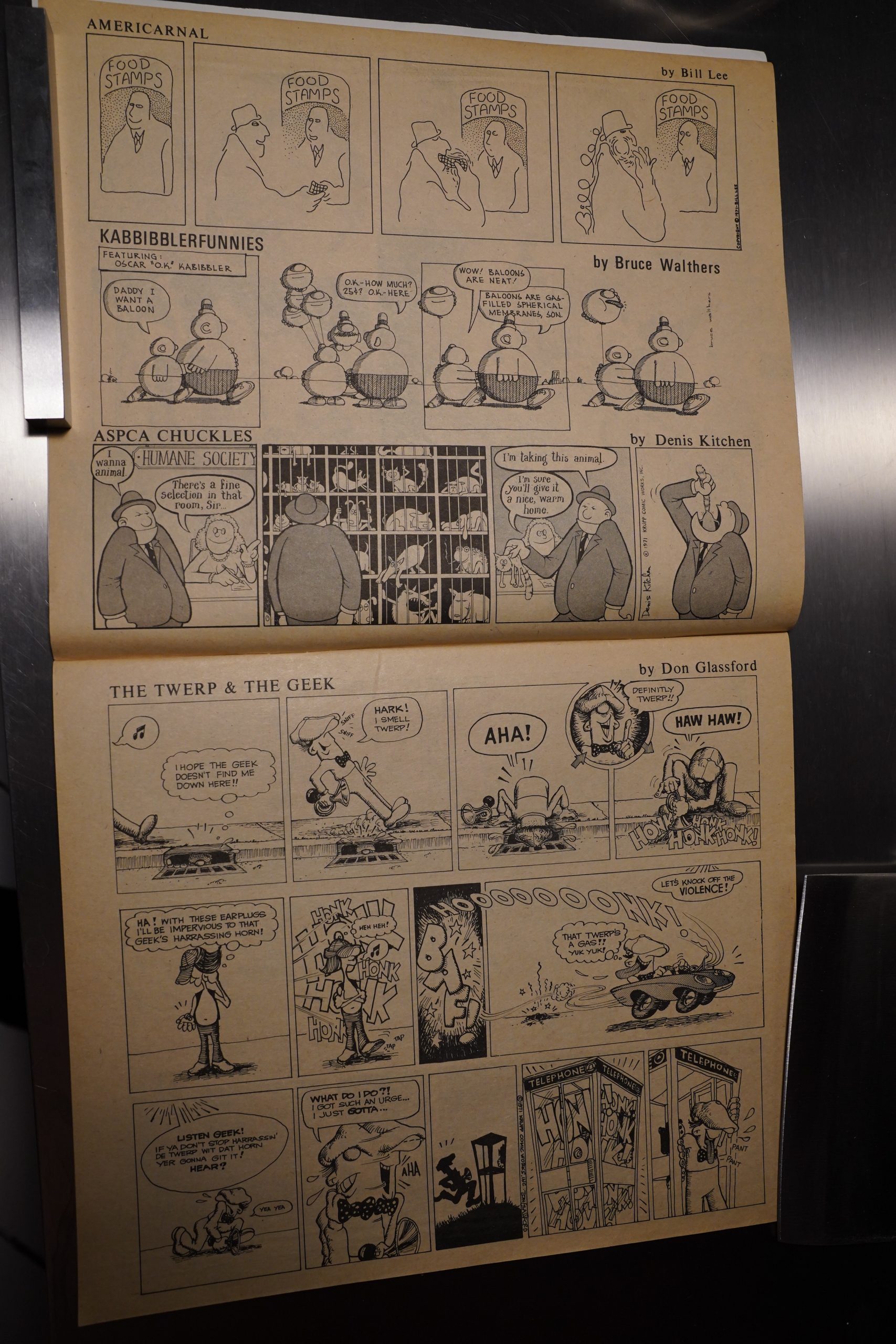 The second issue is allegedly published by Krupp Comic Works, which was an entity established by Kitchen to syndicate underground strips to underground weeklies all over the US. And this issue is apparently just reprinting a whole bunch of these strips? So get get a whole lot of different people on the pages. 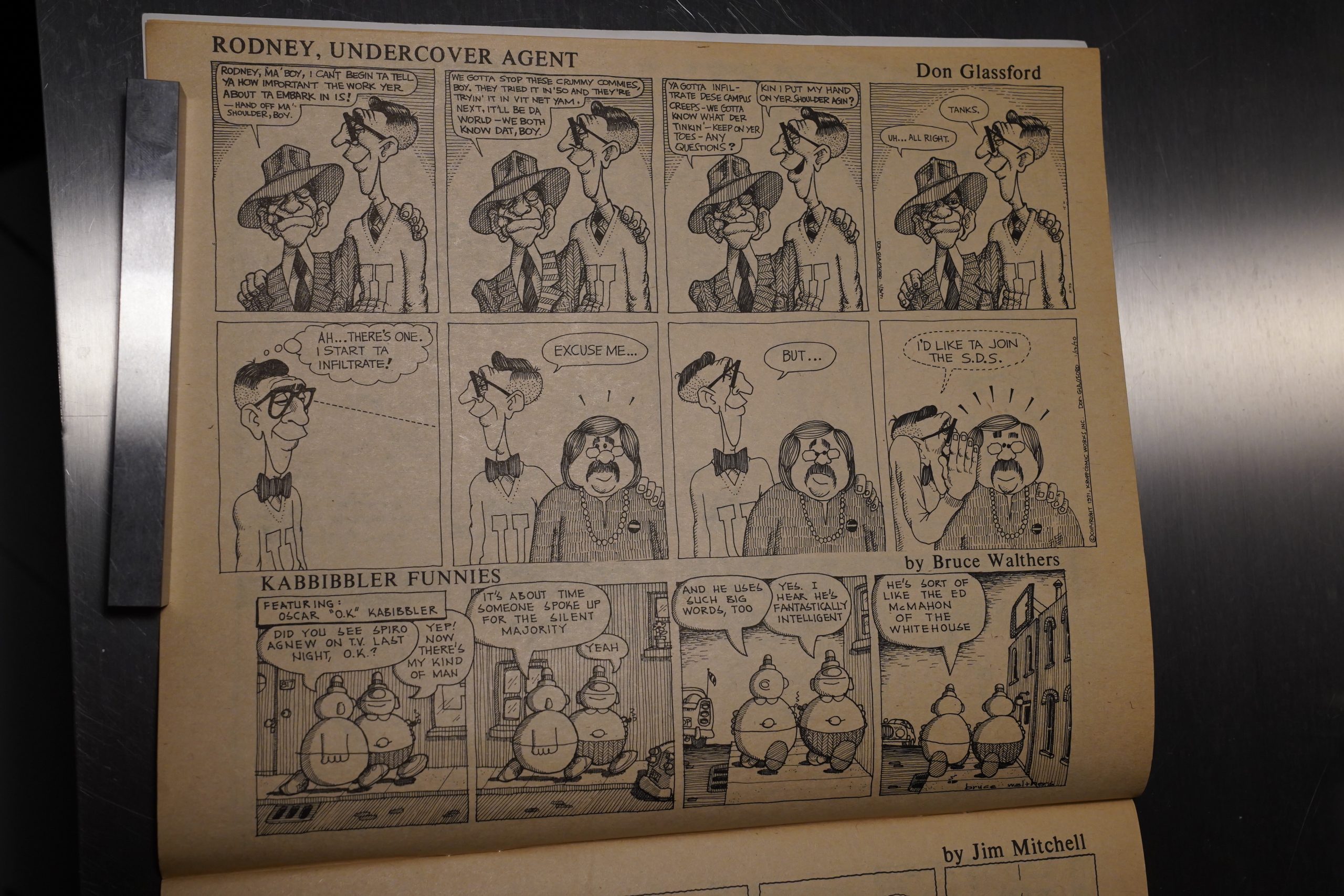 The humour is often quite topical, and at this remove, it’s a bit hard do decipher what the joke actually is. But it’s mostly… fine? 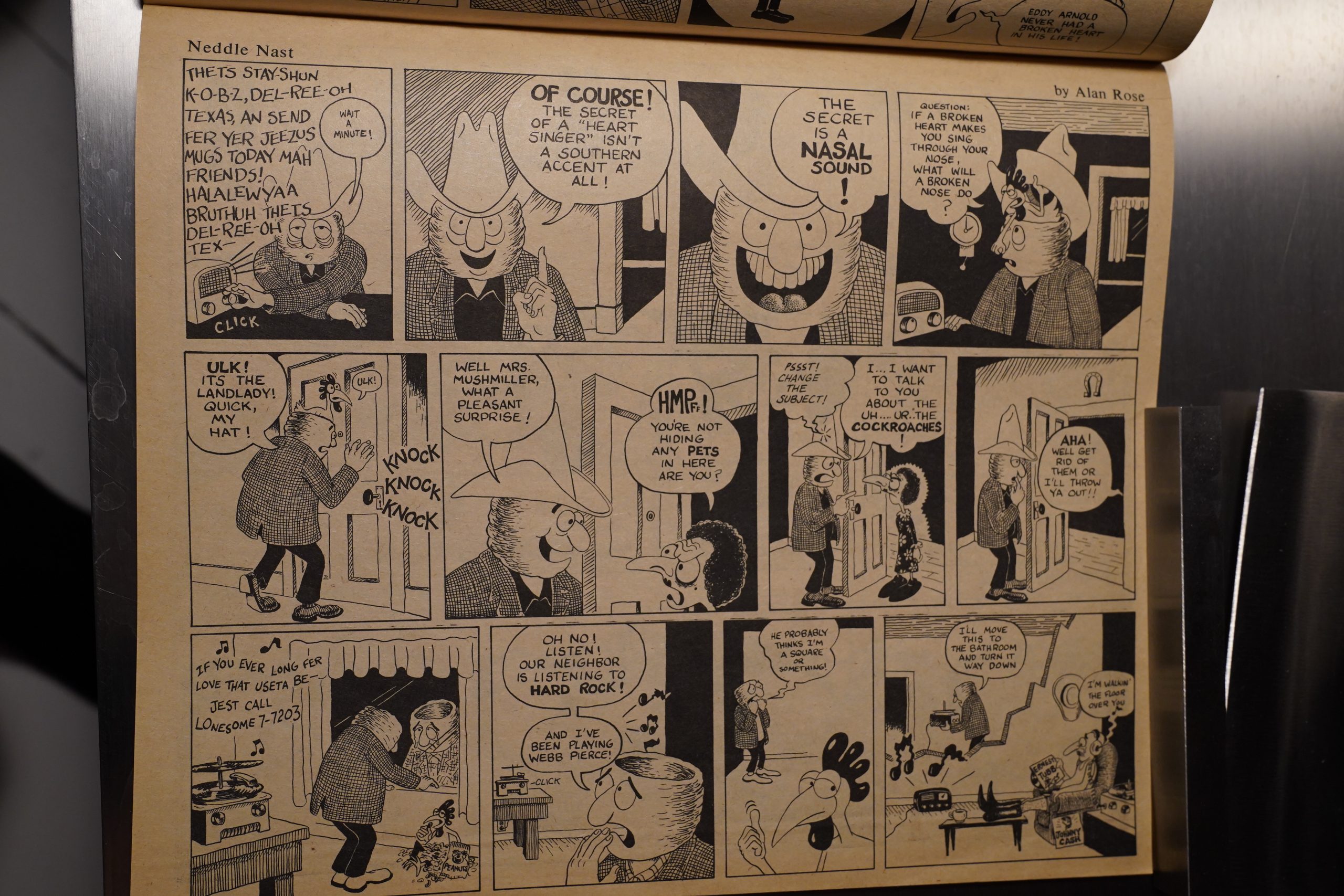 It’s quite varied, at least.

Most of the bits aren’t that funny, though, which leaves you to wonder whether this is just, you know, garden variety not-that-funny-joke or slightly racist? I dunno. 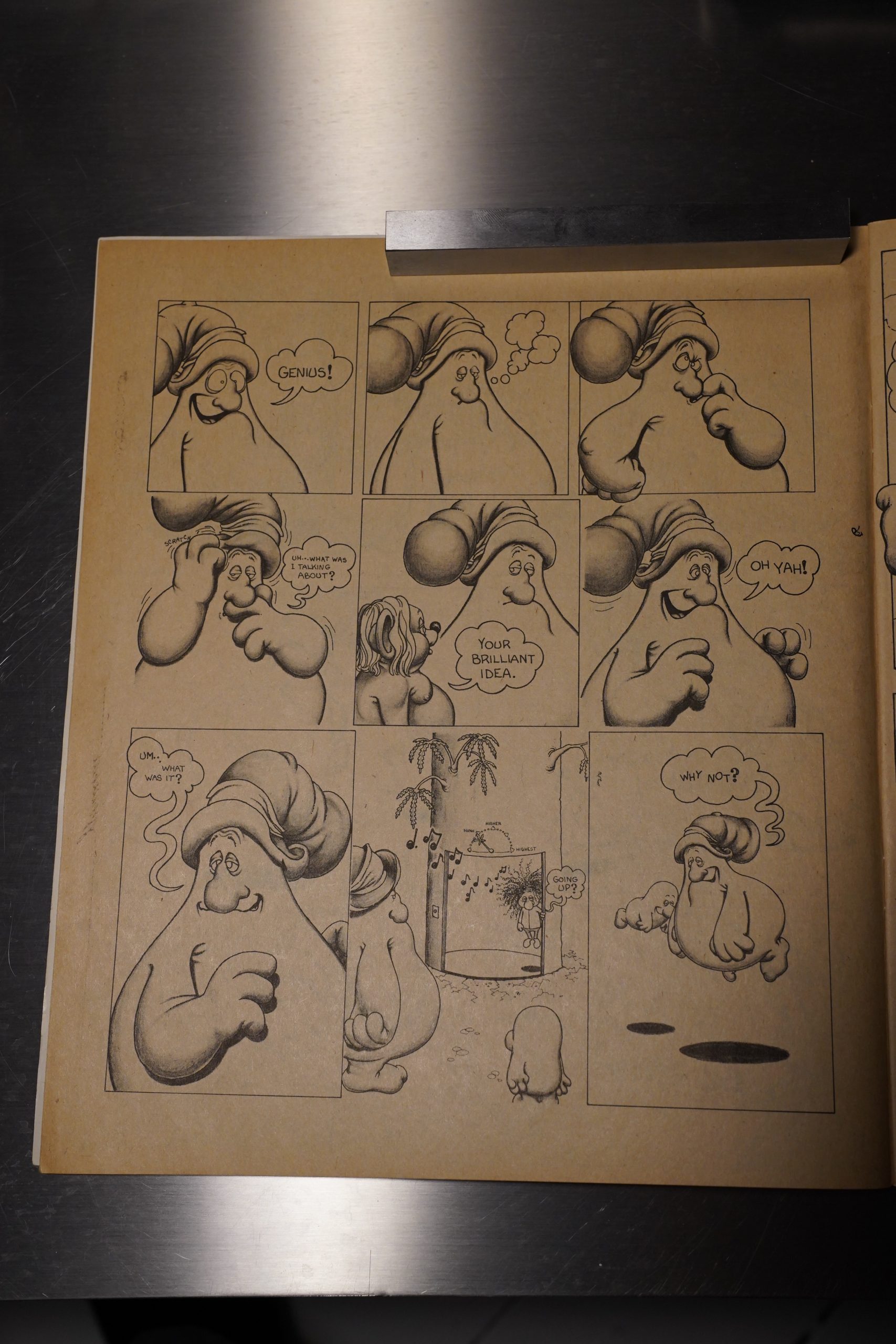 I’m sure that hat isn’t an allusion to anything.

The third and final issue is mostly comics by Jim Mitchell again. Very confusing publishing strategy, but I guess Kitchen was still getting into the swing of things. 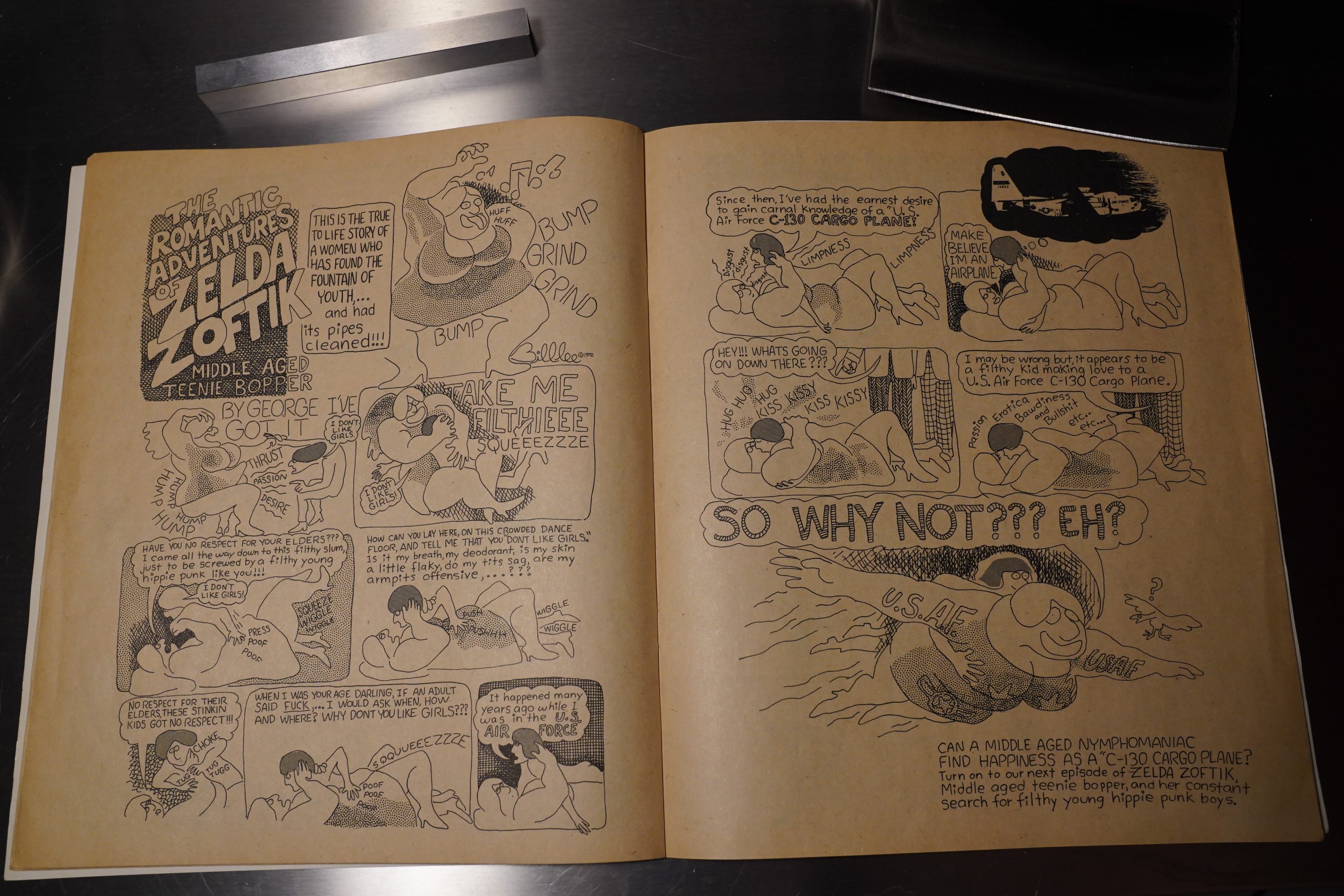 About one third of the final issue is by other people, like Bill Lee’s very strange piece above. 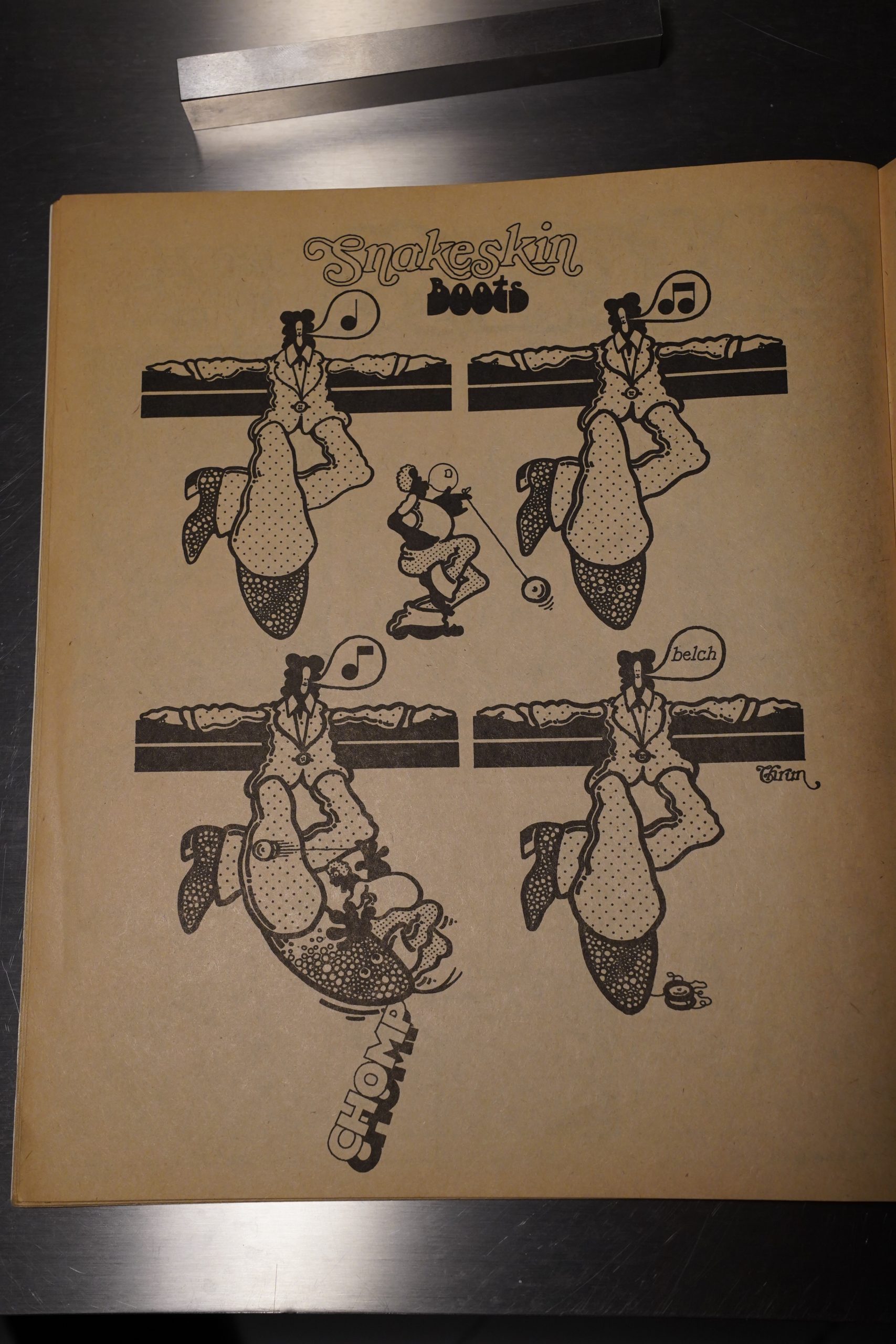 And this very… I don’t know. The art style is so intensely 1971, but the violence seems like more of a bad trip?

Kitchen was interviewed in The Comics Journal #63, page 214:

SHERMAN : There was a period where there seemed to
be a series of syndicated strips that got reprinted in
Smile magazine.
KITCHEN: Yeah. For a while we were syndicating strips
to alternative newspapers and college papers…
SHERMAN: It sounds like the Rip Off Syndicated pages.
KITCHEN: Yes, it was, as a matter of fact. This was
1971. Actually, it lasted two years, and this was when one
of my partners was Jim Mitchell, who did the Smile comics.
He was in charge of the syndicate, and he wasn’t the most
organized person in the world, but it still did fairly well.
Five of us, Mitchell, Don Glassford, Bruce Walthers ,
Wendal Pugh, and myself, all did a weekly strip and we
had at one point 50- some papers and that would have been
enough for it to be successful. The problem was not
getting them to carry it , the problem was getting them to
pay for it (laughter] . We had something like a collec-
tion rate, and that just wasn’t enough. We ended up
making three dollars a strip after expenses per week,
and we just finally had to give up. Also, at that point
Jim Mitchell was disenchanted With Krupp and Vice
versa. He left the organization shortly thereafter and
ended up in a Mexican prison for four and a half years.
so it was an experiment that could have succeeded if
we had persevered, and I think if we’d had a good
business manager at the time who knew how to collect
and who knew how to get people to sign binding con-
tracts (laughter) , it could be a syndicate to this day.
But now Rip Off is doing something similar and they
seem to be doing it successfully. Of course they also
have the fact that Gilbert Shelton is doing Wonder
Wart-Hog and so forth for them, and they also have
Griffith’s Observatory and Joel Beck; a really strong
line-up. I think Trina’s doing strips for them now and
some new cartoonists. It does change, but they’ve had
a pretty good line-up of artists, and so far as I can tell
it’s succeeding.
We even ran their strips in the Fox River Patriot, the
local paper that I eo-publish, gnd we were able to get
away with Warf-Hog for quite a while until (laughter]
it got a little too outrageous and some Of the farmers
complained [laughter) . It’s kind of a parochial area,
but now We run Phoebe and the Pigeon People and what-
ever comics we can. I try to inject comix into the
community media, and for the most part they’re well
received. We ran one of Bill Griffith’s Zippy stories and
Zippy in one Of the panels says, “Oh, God!” and we got
I think seven letters from old ladies complaining that it
was blasphemous. So that’s where I live.

KITCHEN: Right. And then it also was where the Krupp
Syndicate was based. The Bugle was our deadline on
which the syndicate was based so that we gould then take
that weekly package, reproduce it, and send stats Out to
all the members. So the Bugle had the strips a week or
two before any other paper in the Country and frequently
had comics that we didn’t use elsewhere because they
were either too local or sometimes we would so six, seven
strips a week and we could only fit five on the proof
sheets. Some day I might even like to go back and collect
the best of those, because only a few were really reprinted
in Smile, and even Smile was not a widely circulated comic.
So there’s a lot of good stuff languishing in the files.
SHERMAN: Yeah, I think I’ve only seen about four or
five Of your strips from that period.
KITCHEN: Yeah? It was probably my most prolific
period ever, because I had to draw something every Week.
That’s one reason I liked it: because somebody forced me
to draw. wish somebody now would make me do a strip
every week, but nobody will.
[general laughter]
HOLLY BROOKS: 1 know. I do my best.
KITCHEN: Holly tries her best, but.
I don’t take
her threats seriously.
SHERMAN : At one point, some California artists were
critical of Krupp —Roger Brand in particular.
KITCHEN: Yeah, Roger was probably the most vocal
critic—he commented in Funnyworld at one point that
he thought Krupp was the Charlton of underground
comics, which really hurt, but I certainly understand
why Roger was saying that. The San Francisco artists
Were certainly the vanguard of the undergmund artist
movement at that point in time, and the Midwest was an
awfully dumb place to be in their view and perhaps even
from my own point of view. Everyone was migrating out
to San Francisco with good reason: it was a cultural
mecca, it was a beautiful place to live, and why I
stayed in Wisconsin was because I was stubborn and had
family ties and was dumb laughter] . When I was covered
with four feet of snow, I often wondered why I didn’t go
to San Francisco too. But in Wisconsin I did stay and the
distance caused lack Of communication and misunderstand-
I think Roger felt what he and some Of the other West
Coast cartoonists were doing was much more valid at the
time, shall we say more “underground and I think
probably it’s true. Had I published S. Clay Wilson in the
Midwest, I probably would have been tarred and
feathered out of Milwaukee, which is a large city but
would have tarred and feathered me nevertheless. The
San Francisco artists had a much freer situation. I was
probably more conservative personally than many of them
and I also, at that time, was certainly geographically
isolated from the mainstream of underground cartoonists.
It changed as more of them began to travel and pass
through the Midwest and as we met in person a lot of those
misunderstandings began to clear up. I know that for
instance a comic book like Smile at the time. which was
mainly a collection of Jim Mitchell’s work, was considered
horribly cute and juvenile by most of the San Francisco
artists. in the same way Barefootz was criticized later on.
I think part of it was a general California attitude
toward the Midwest which still prevails, to a large degree,
If you’re on the East Coast or on the West Coast, you’re
where things are happening and Midwest bumpkins can’t
possibly produce anything valid. As the artists began
passing through and Crumb began giving me books, and
the Bijou books came out of the Midwest, more and more
things began being done in Wisconsin, and the idea that
the Midwest was a stupid place to be began to slowly
disappear. I think when West Coast artists visited and
saw how pretty it was and how clean the air was and
saw what a nice operation we had and saw how low the
rent was and saw how friendly the people were where I
lived—a lot of these misconceptions just withered away.
I have often second-guessed myself, but in the long run
I’m glad I decided to stay in Wisconsin from a number of
viewpoints. Certainly from a practical viewpoint , it makes
sense to have a publishing company in the Midwest,
beause it’s a very easy way to ship to all points of the
country. It’s a printing center. Itm very near paper
supplies. You can ask the Comics Journal and others,
it’s a good place to print and to warehouse and to
distribute. From a cultural viewpoint Pm sure it would
be much more interesting to live in San Francisco.
Leonard Rifas, for example, moved to Wisconsin to work
at Krupp for about a year. He constantly bemoaned the
fact that the library only had 28 volumes and he had to
drive 35 miles to see a movie and we had no community
theatre, we had no Indonesian restaurants (laughter] ,
and so on.

This is the third post in the Entire Kitchen Sink blog series.