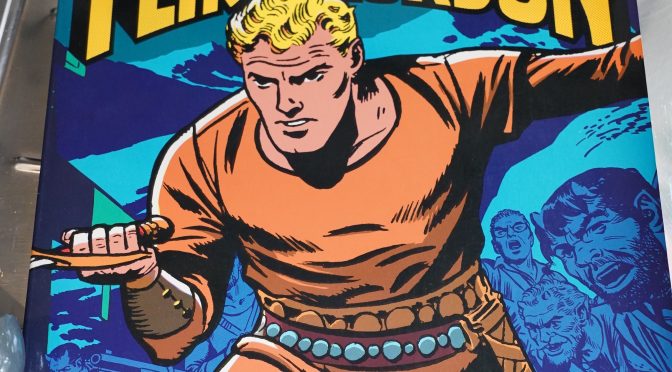 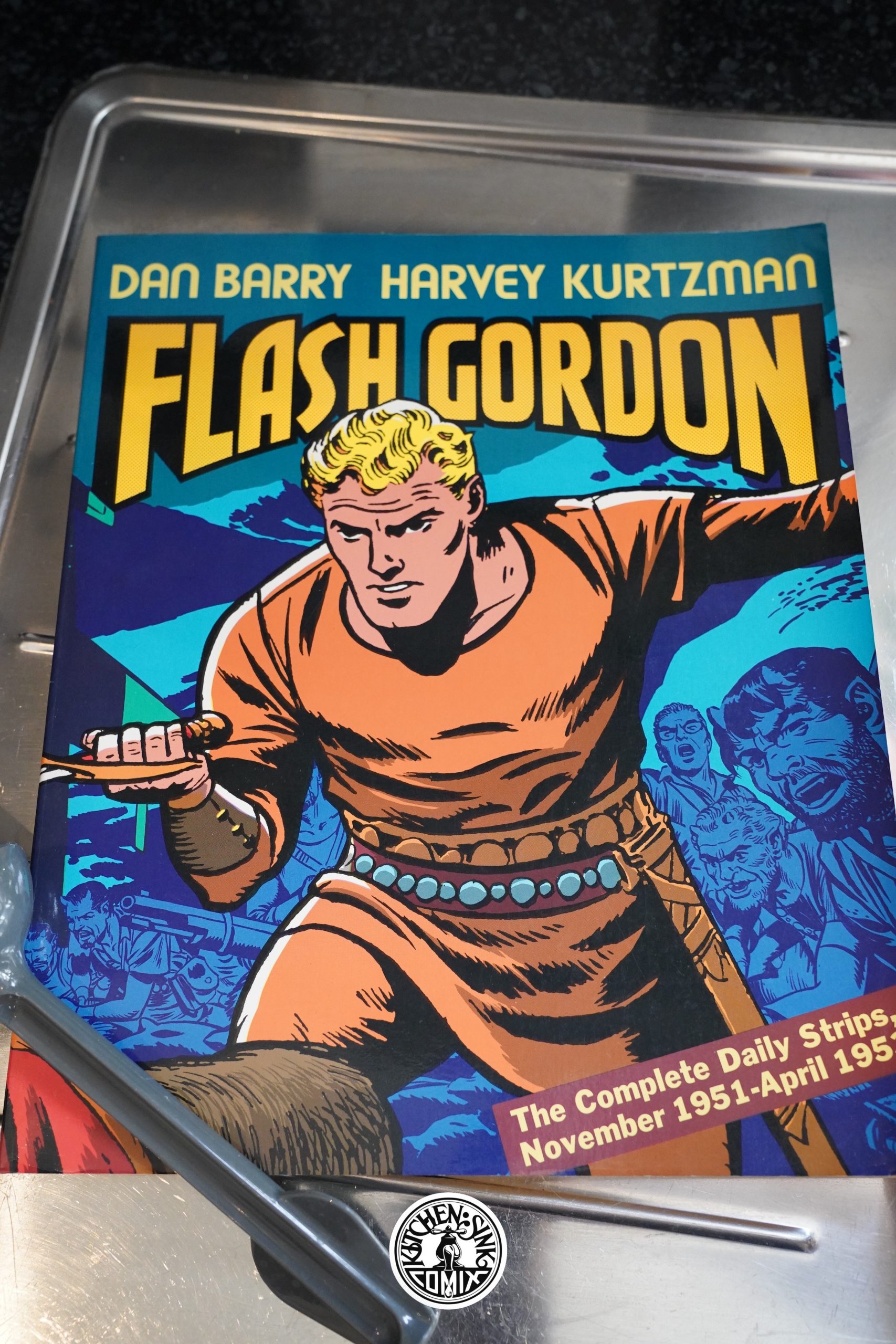 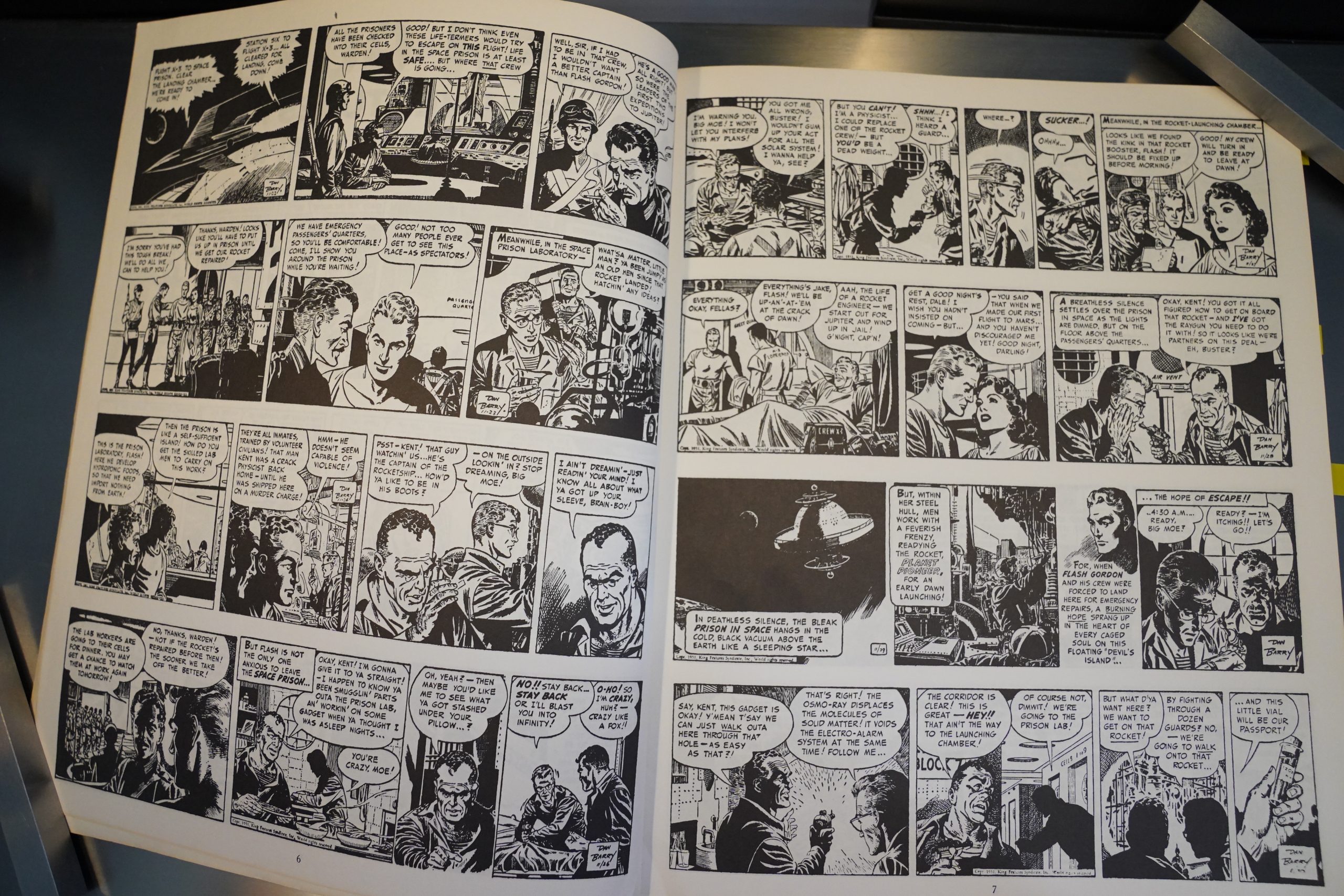 This book is in a very unusual format for no discernible reasons. There’s often a problem with finding a good format when doing reprints of comic strips because Sunday pages and daily strips have different requirements, but this is just daily strips, so printing four to a (huge) page is just odd. Using the same format at the Steve Canyon books would have been more logical, and they you could have printed the strips larger, too.

Anyway, the first couple months of this strip is just Barry without Kurtzman, and Barry was trying to take the strip away from the more fantasy oriented origins and going in a more hard sci fi direction — so we get a plot involving a prison in space. It’s pretty good, and Barry’s artwork is certainly appealing. 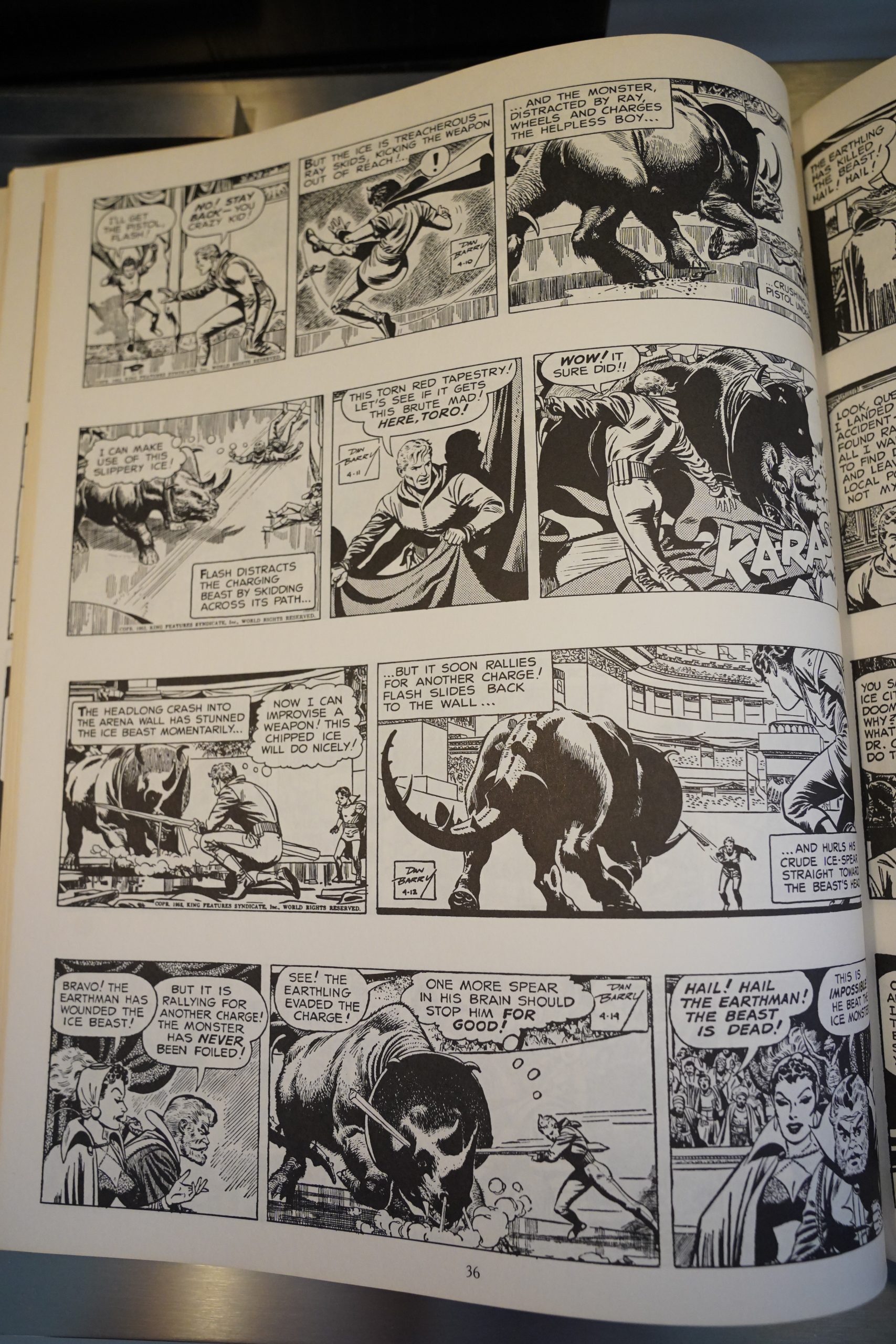 Then Kurtzman comes aboard as the writer, and all that goes out the window, and we’re in more action/fantasy territory again.

And it’s not that it’s out of character for women to throw themselves at Flash Gordon, but it’s so abrupt here that it seems like we’re in parody territory. 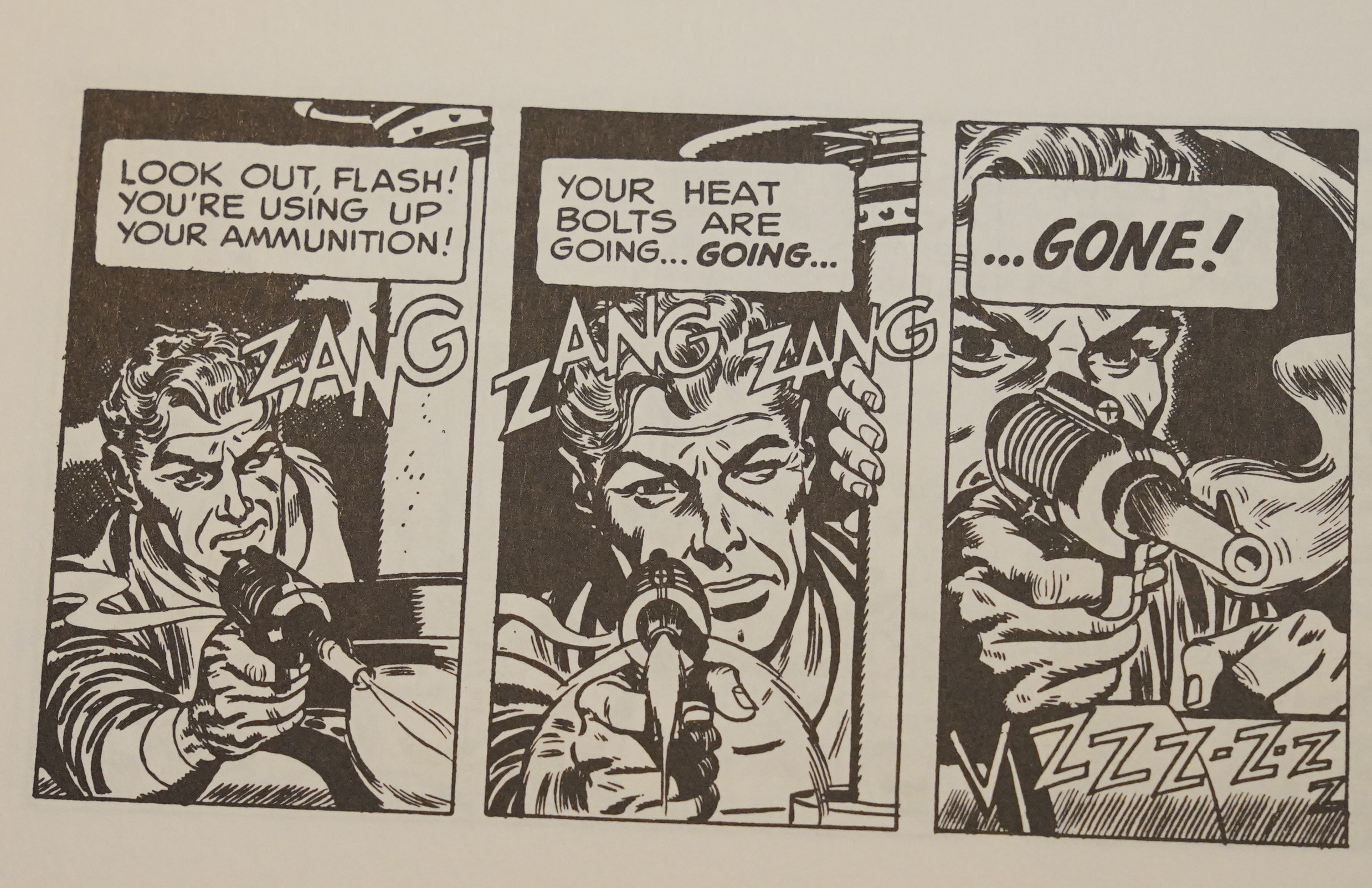 And then, out of the blue, we suddenly get a dramatic narrator, as if this were one of Kurtzman’s war comics?

In short, the Kurtzman/Barry collaboration is a mess — the plots seem to make no sense, and the tone veers wildly from one strip to the next. 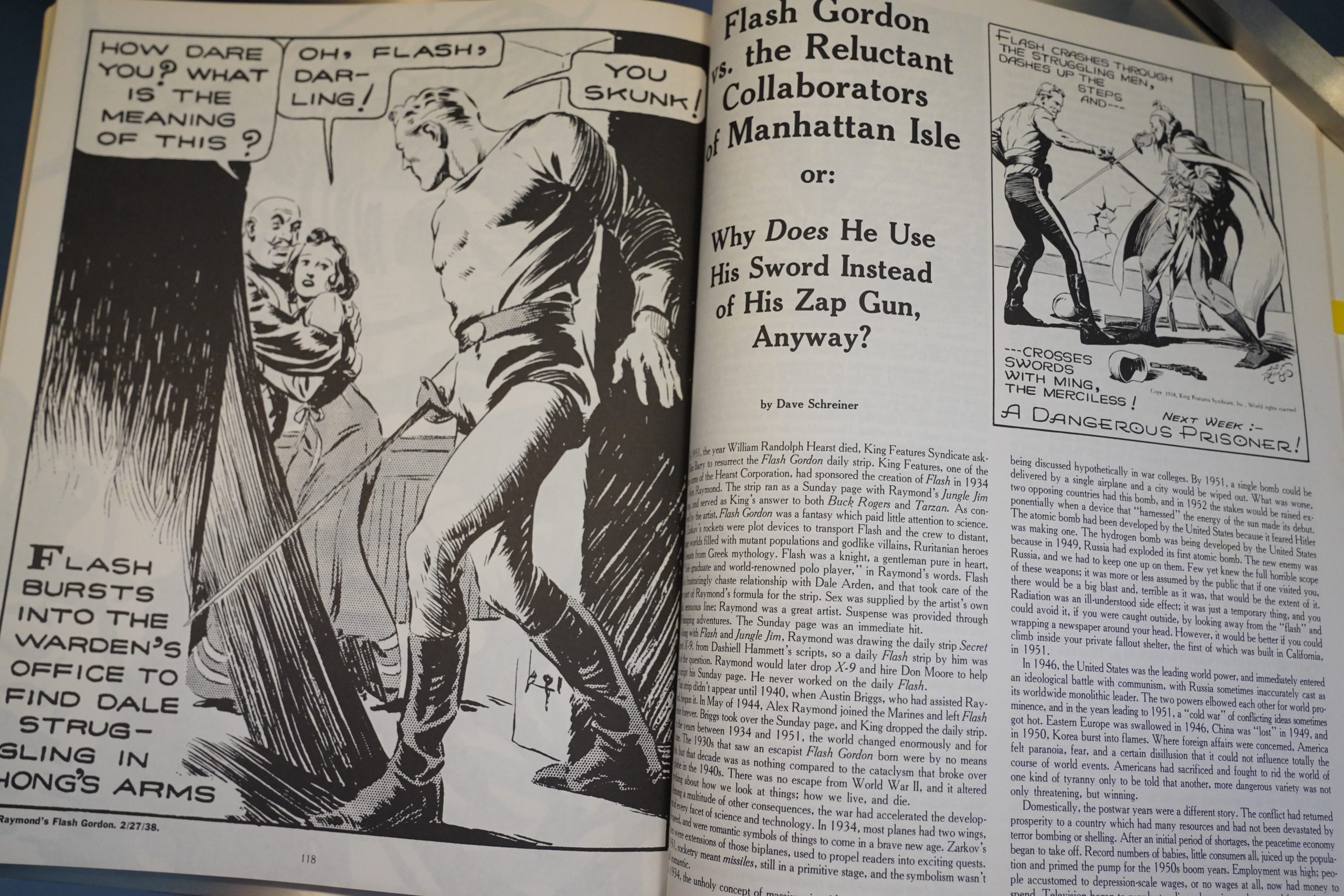 There’s excellent supplemental material in this book, though, including a long essay from Dave Schreiner. 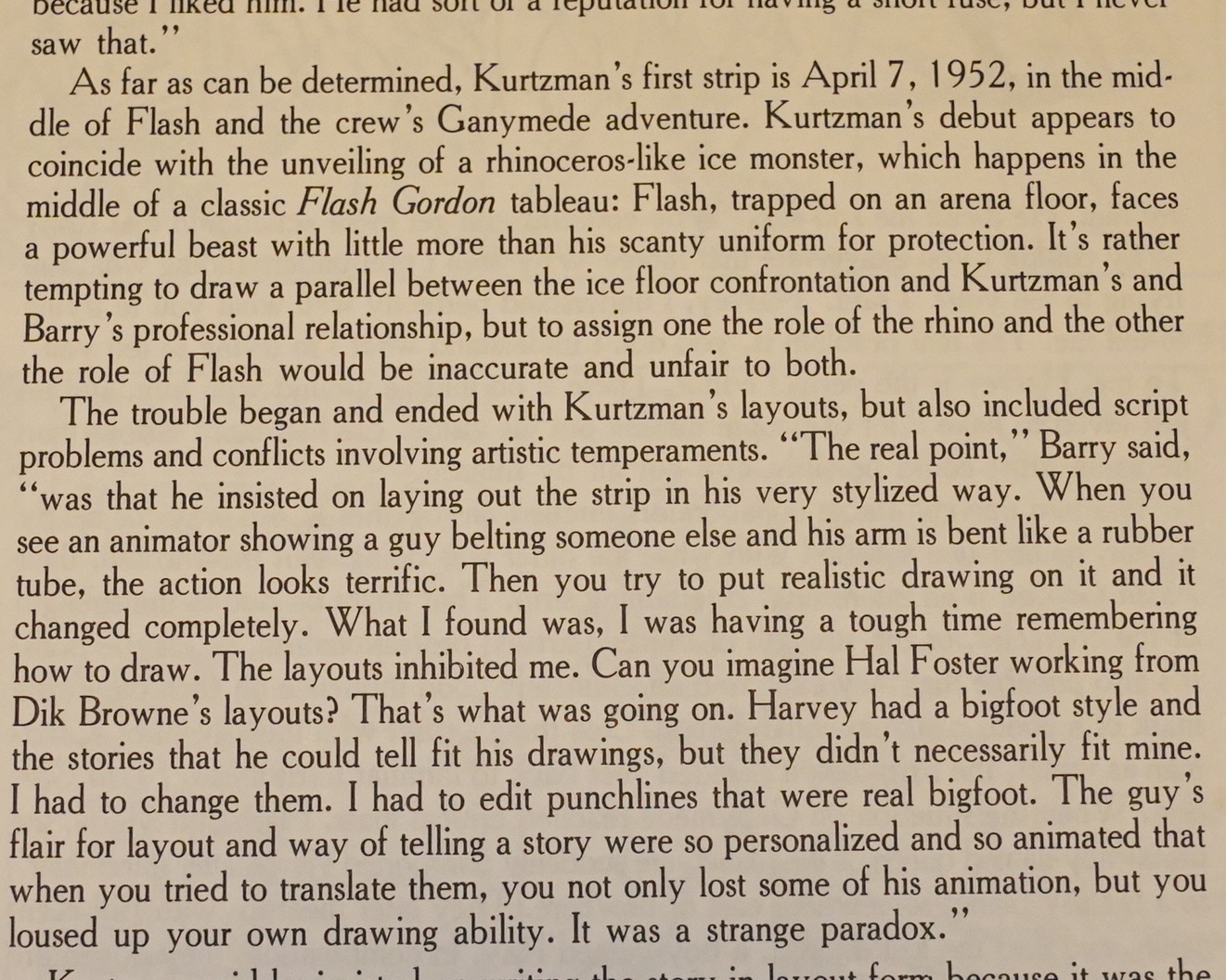 He’s interviewed all the people involved, and gets them to speak frankly. Barry had a lot of problems working from Kurtzman’s plots, but was too polite to actually fire Kurtzman. So the collaboration went on for a year, until Mad became a hit and Barry felt like he could finally let him go gently.

An amusingly enough, it sounds like Kurtzman knew nothing about this dissatisfaction on Barry’s part (until he presumably read it here).

It’s good journalism and worth the book alone. 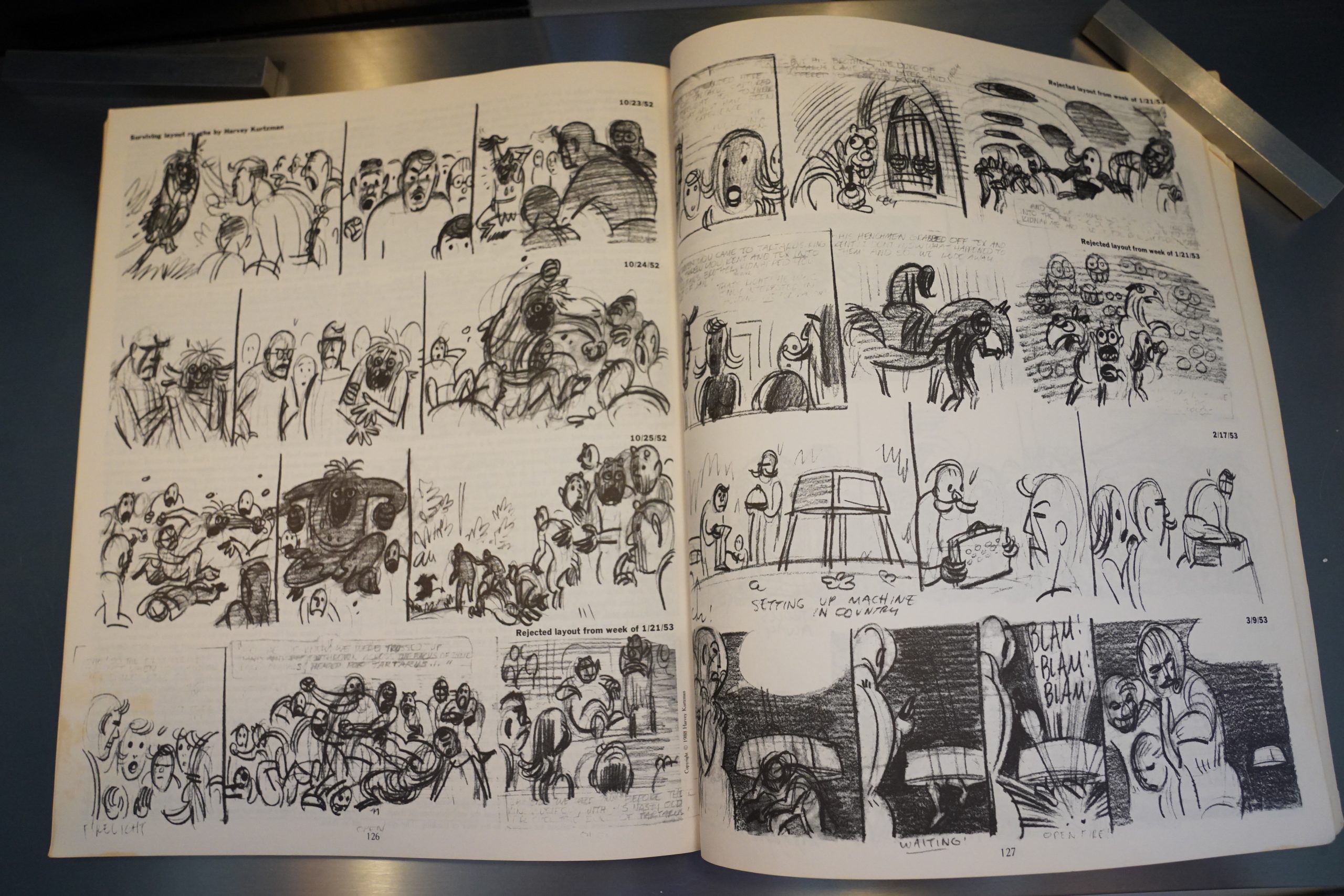 We also get some pages of Kurtzman’s layouts, and some Frazetta pencils, and it’s a really good archival release.

As for the Barry/Kurtzman strips, they’re… not good.

AH: And what kind of format will this
be printed in?
SCHREINER: It’s a hard and soft-
cover book. It’s a hard 28 pages. It’s
kind of an odd-sized book. It’s going
to be 12″ high by 9h” wide.
AH: And how are you putting the
strips on the page?
SCHREINER: Four strips on a page.
We had a set of proofs from Harvey
Kurtzman who wrote a good portion
of that time period we’ll be printing.
And we’re reprinting the strips at the
size of the proofs which were 12″
wide by a couple of inches high and
just run it straight through.

SCHREINER: After the first story
that Barry completed, he and Harvey
Kurtzman got togethermd Harvey
wrote the next year or so of the strip.
AH: Right; I’ve talked to Dan and he
discussed a little bit about what his
relationship with Harvey was like.
SCHREINER: They had some con-
flict, but they still had a good work-
ing, well, they had a workable rela-
tionship at least through that period
of time.
AH: From what Dan said I gathered
their working styles clashed. He said
he maintained respect for Harvey all
through the period even when they
were having troubles doing the strip.
SCHREINER: Harvey corraborates
that. We talked to Harvey for this
book and he really felt that Dan Barry
definitely had his own strong ideas
about which direction a story should
take and so forth, but they still got
along. And, personally, I guess they
got along very well.
AH: It’s always heartening to hear
that people can clash creatively and
still don ‘t have any animosity.

AH: Did Kurtzman use his usual
stick-figure layouts?
BARRY: He used the same writing
style he always did, and it was im-
possible for me to work over. (laughs).
What happened is, here’s a guy who
can tell a story wonderfully in this
wild bigfoot style, but you start to add
drawing to it, you lose the punch, and
at the same time the goddamn paradox
is that you’ve been looking at his
drawings and you’ve forgotten how to
draw! (laughs) So what came out was
some kind of bastardization that was
a stiff me. I hated it! And Harvey kep!
—well, he didn’t have any hair to pull
out, he wore a very close-cropped
crew cut, but he was pulling his hair
out because he was by then an editor.
This was while he was planning Mad,
but he was doing those war and hor-
ror books for EC, and he had this crew
of guys who loved working for him
and could translate his layouts fairly
faithfully. More than that, his being
the editor, he could insist that they
bend, so they did. For me, it didn’t
make any damn sense. •I’d hired a
writer, and I found myself with a boss!
(laughs) This is impossible!
Our taste was totally different. I
called on Harvey because, as I told
you, I’d met him during the organi-
zing days of that union that never hap-
pened. I’d been very impressed with
him. He looks like an intellectual, or
did then: bow tie, crew cut—he looked
like the super egghead Harvard
graduate.
AH: Yeah, Harvey looks intelligent…
BARRY: well, he is intelligent, but
his taste is the lowest brow you can
find! And he loves it! That’s his taste
and that’s probably his greatness. Our
tastes didn’t jell. (laughs) It’s really
amazing because I liked him all along,
but I was almost getting an ulcer try-
ing to decide how I was going to abort
this thing withgout hurting his feelings
and without crushing that enormous
ego. I don’t think it’s any secret, I
think he might admit it, Harvey always
believed himself the greatest creative
genius that was ever born. Nobody
quite knew how to tell him [when
things weren’t going right].

This is the one hundred and first post in the Entire Kitchen Sink blog series.