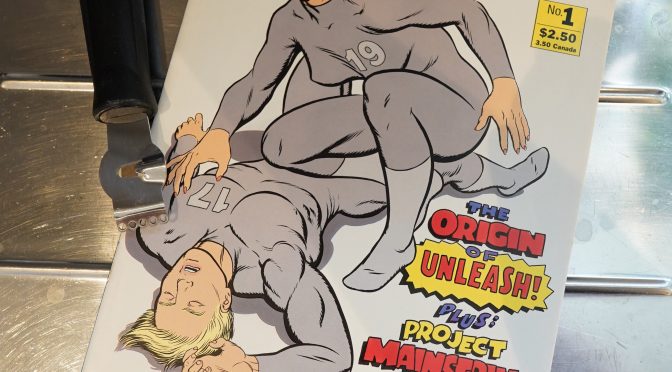 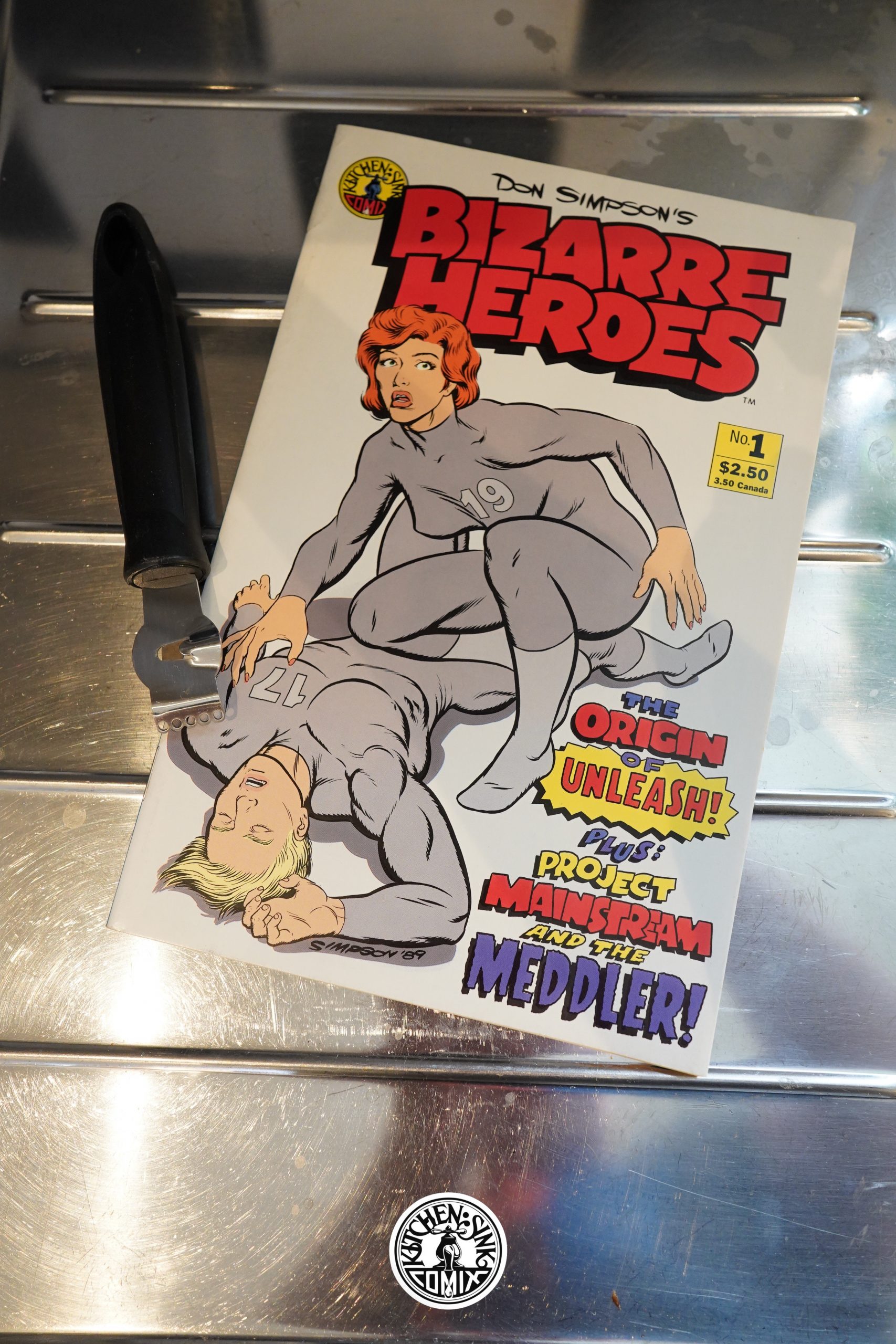 Simpson’s Megaton Man had had a good run at Kitchen Sink in the 80s, but the 90s were more difficult time to launch quirky books. Kitchen Sink bravely attempted to keep going, launching quite a few series… but they all fizzled after an issue or two, presumably from low sales. 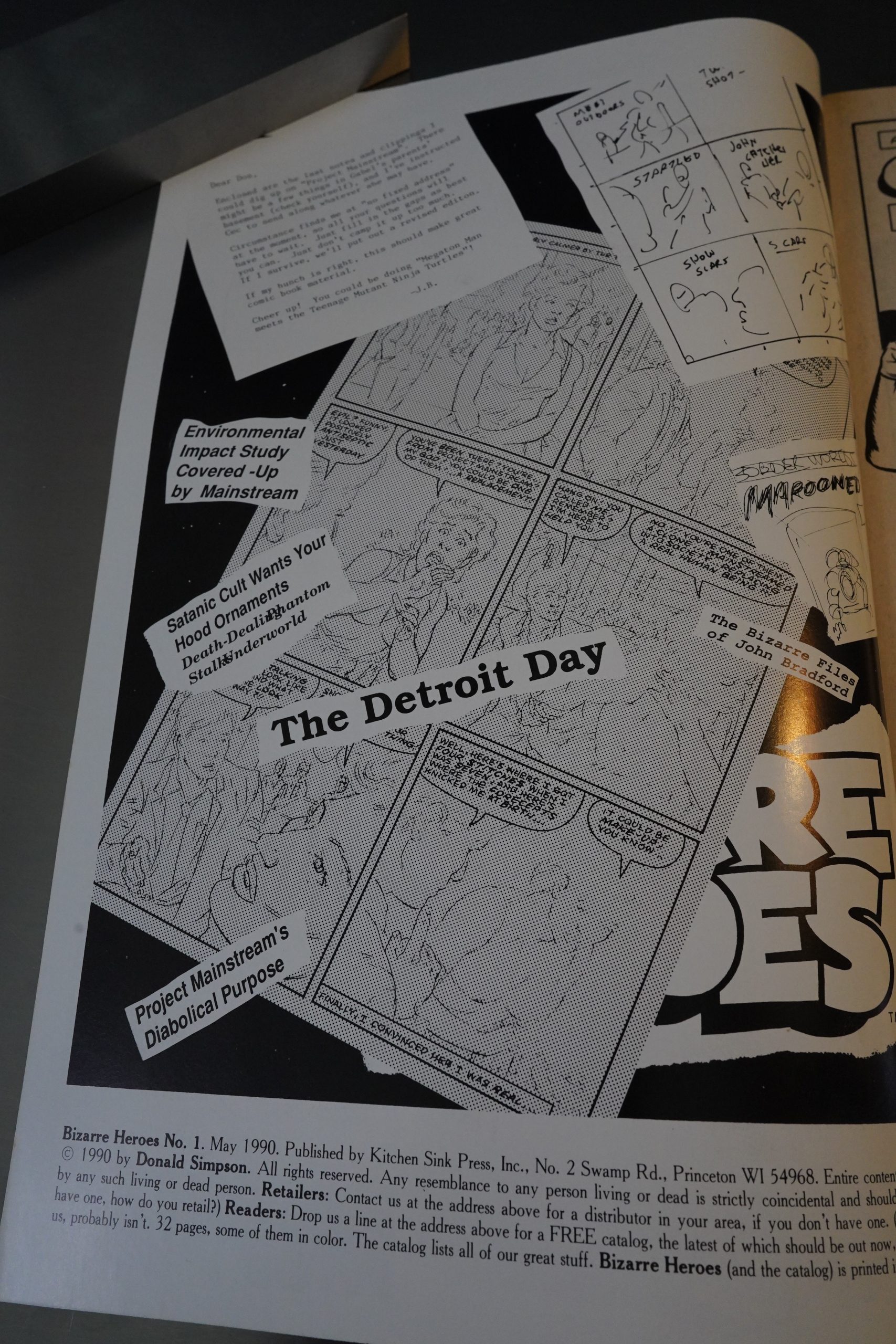 Bizarre Heroes seems very much like a post-Watchman book — it seems to be setting up a “lost manuscript” sort of situation and stuff. 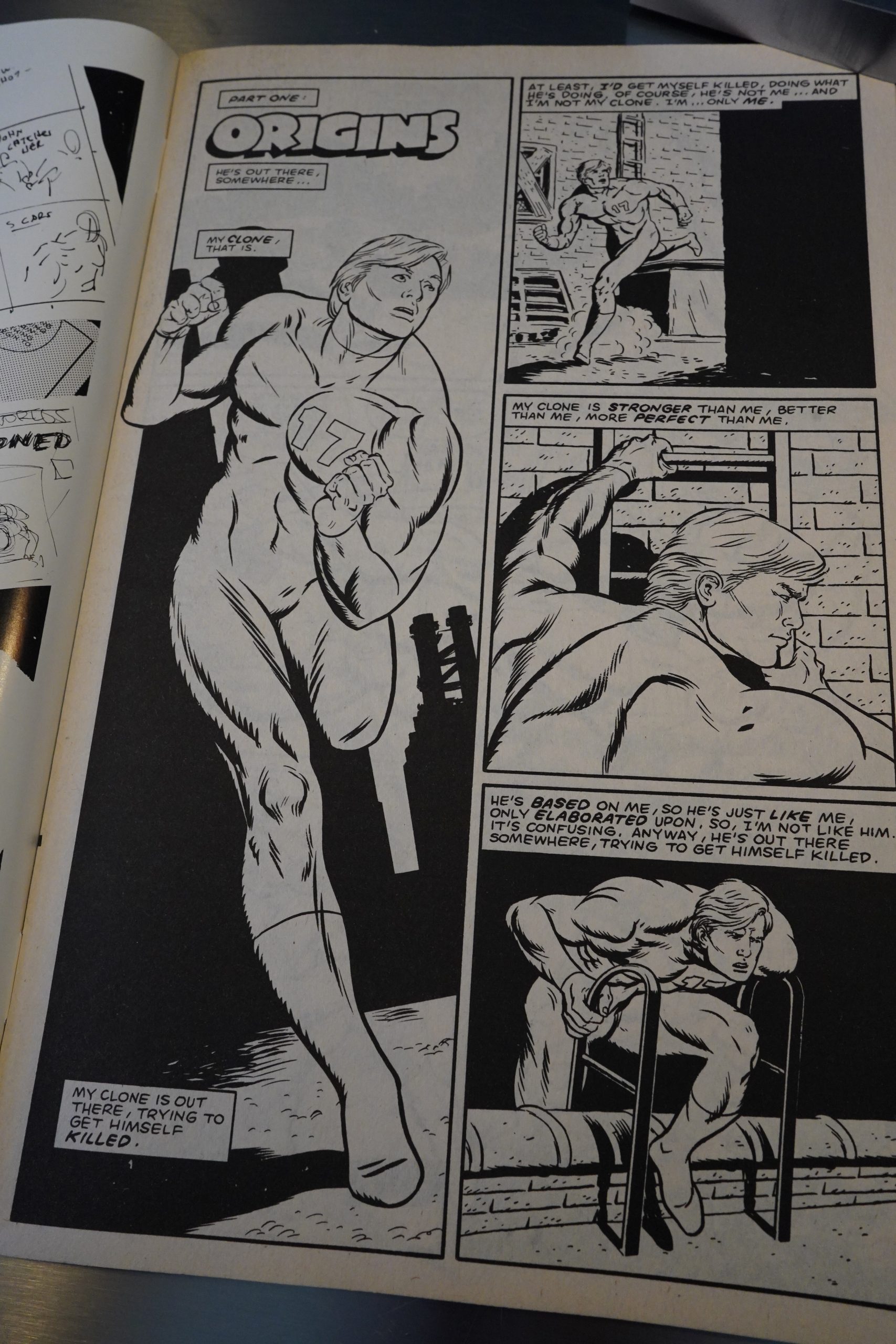 With a narrator that may or may not be reliable and stuff. Very much on point. 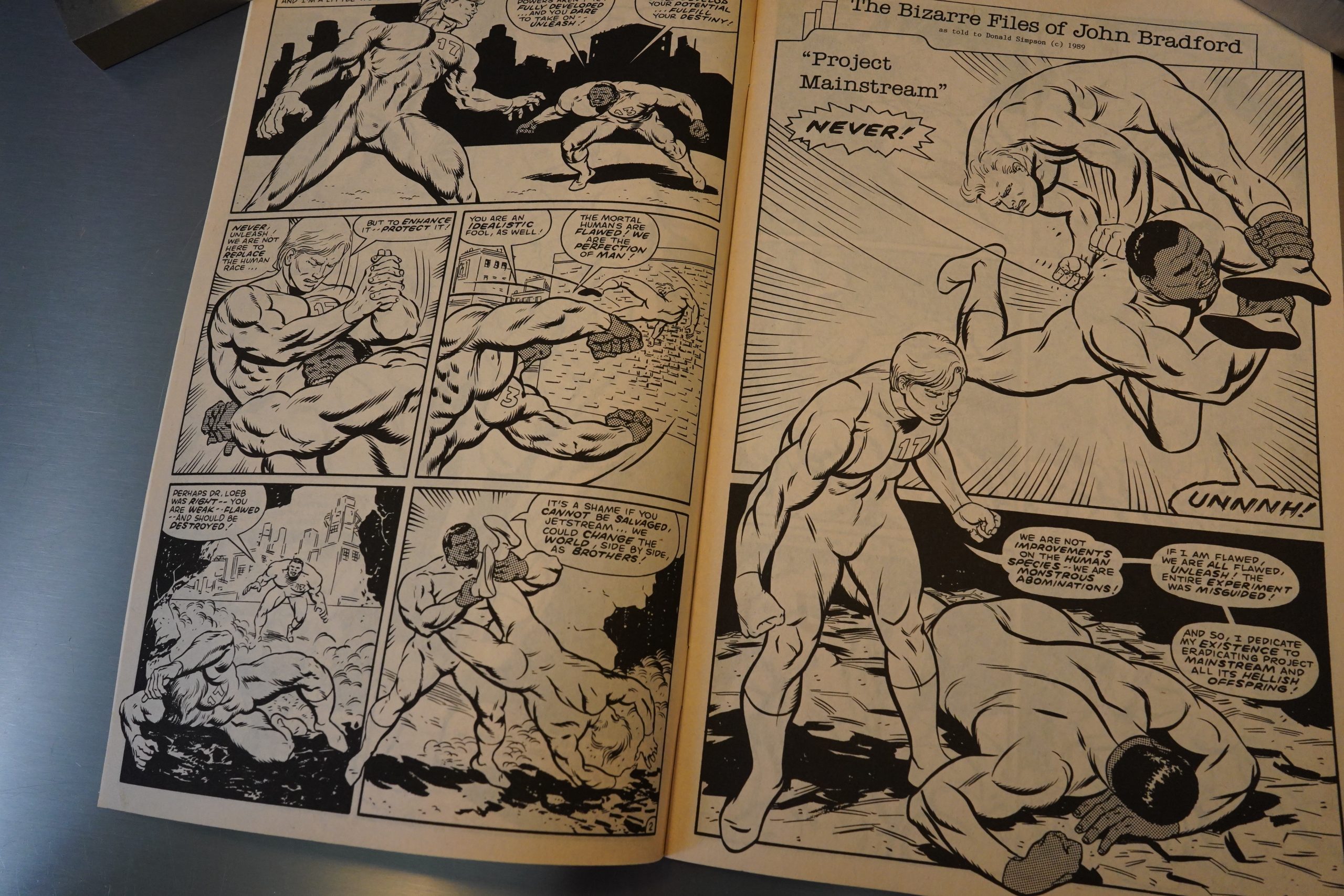 Wow, that’s an odd fight scene. It’s fortunate that that big guy hoisted him by his ankles that way… as one does… 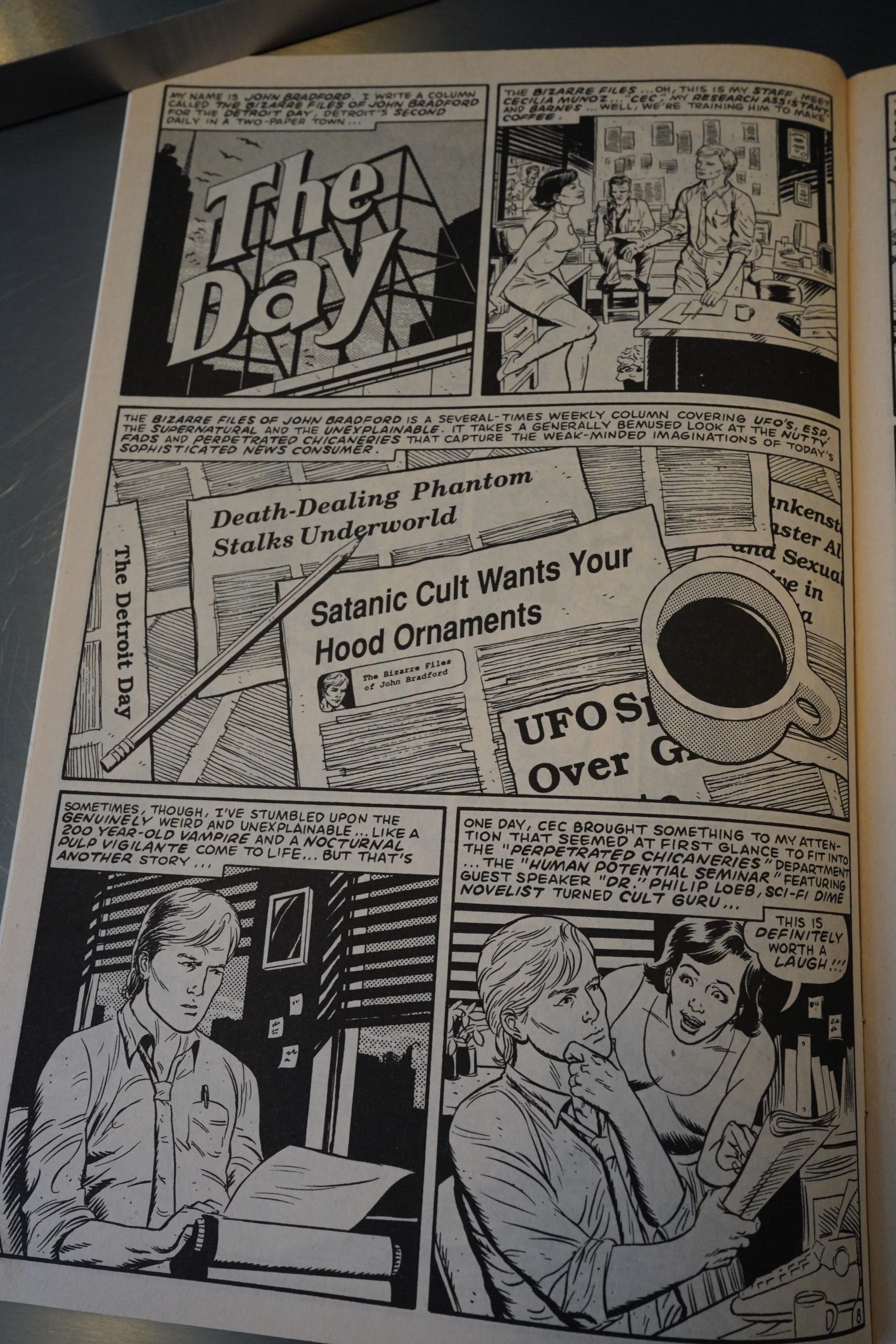 But, no, it soon turns out to be a very un-meta book — after the flourishes in the opening pages, we settle down to a bog-standard journalist-on-the-trail-of-a-mystery kind of thing. 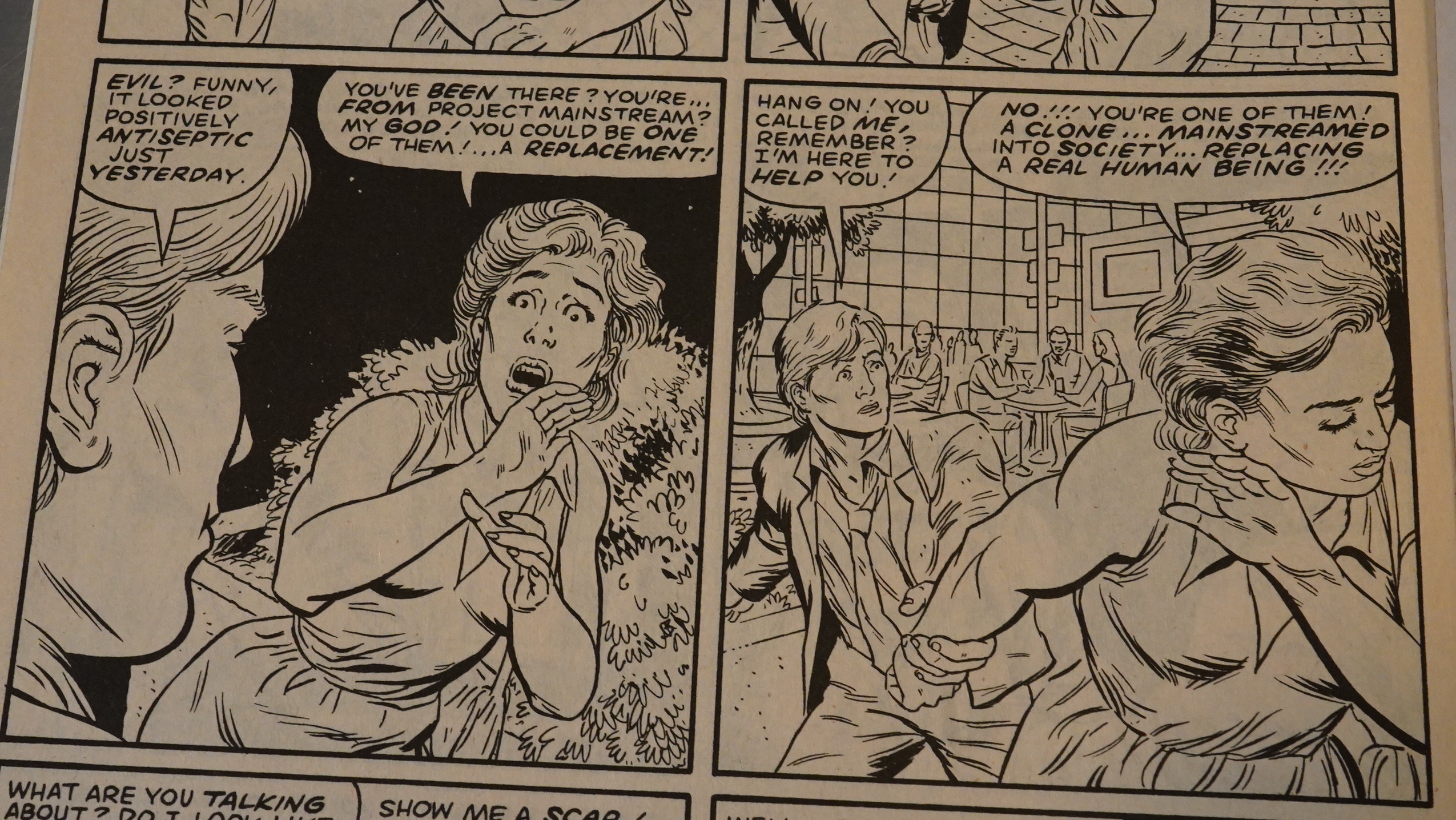 The book’s tone is all over the place. Most of the pages seem to play the drama straight, while other scenes seem clearly meant to be parodies. But what to make of things like the above? Her expressions are over the top, and the angles are super dramatic, but it’s not actually funny? 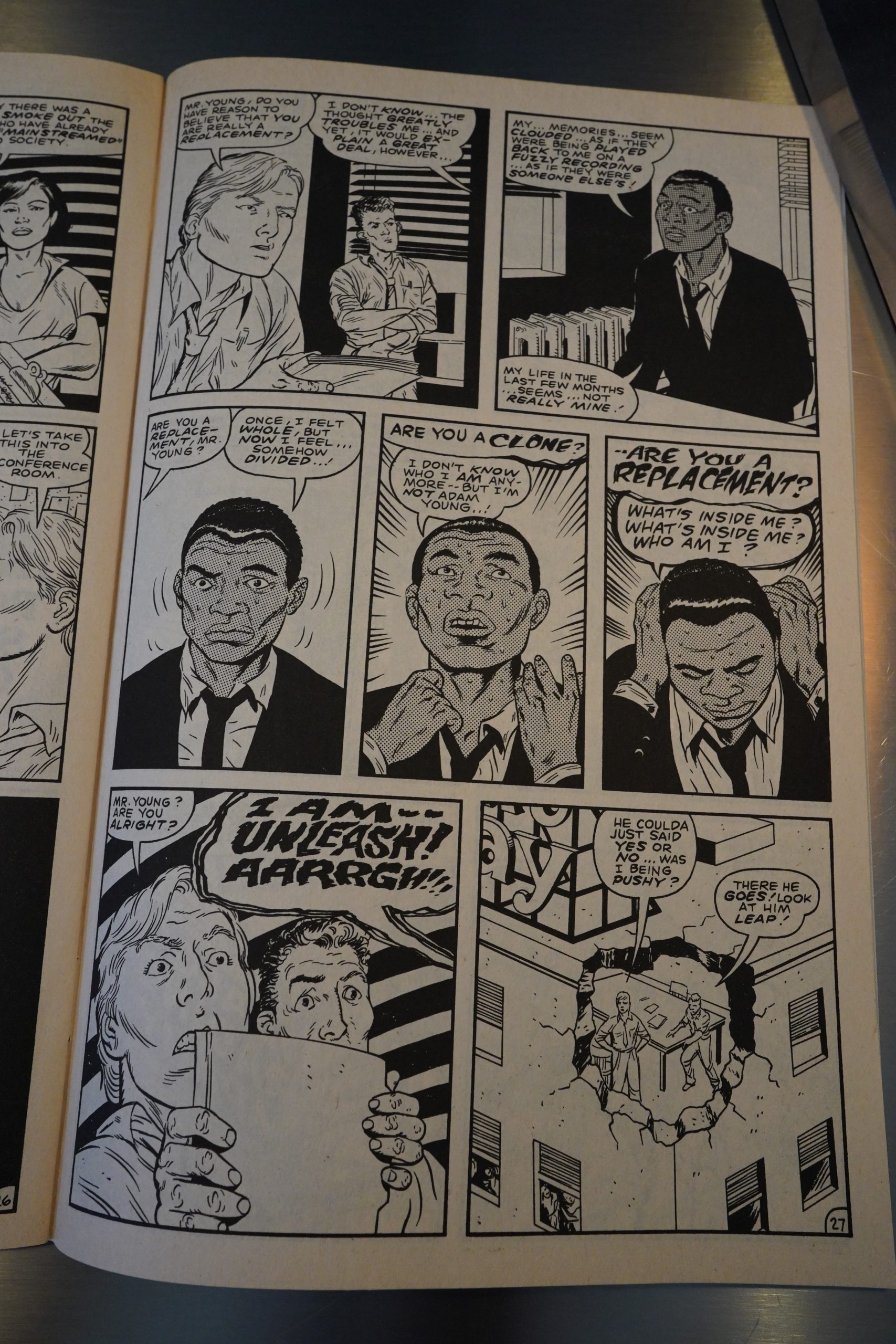 While this is clearly played for yuks, but… isn’t actually funny?

Still, I rather liked the issue, and would have been perfectly happy to keep reading to see where all this was going. Simpsons continued the series for more than a dozen issues over two series four years later, but I haven’t read them.

Kitchen Sink is promoting Bizarre
Heroes as their first “semi-legitimate
super-hero book.” It may seem an odd
course for one• of the leading alter-
native publishers to take, but when
you consider it’s Donald Simpson in
the driver’s seat, it makes a little more
sense.
Yet I’m afraid Bizarre Heroes is
exactly what they claim—it’s just
another pseudo-scientific action yarn.
The story was average but interesting.
The plot of scientifically engineering
a better breed of human and using
them to replace regular people was
nicely handled with a satirical under-
current that pokes fun at New Age
science and tabloid newspapers,
among other subjects.
The reporter who discovers the
conspiracy (and has a superior clone
of himself) serves as narrator and as
an outlet for Simpson’s humorous
side. He’s a typical white bread good
guy who shoots enough wisecracks to
keep the atmosphere light despite
the ominous occurrences in his life.
Though he lacks super-powers, he’s
the real hero.
Bizarre Heroes was a fun read; not
spectacular but worth the time. How-
ever, it wasn’t worth the price. $2.50
for 30 pages of unresolved story is a
bit much, especially considering that
there’s no indication when (or if) it’ll
be concluded. You could pick up all
the issues of the “Dark Knight Over
Metropolis” storyline running in the
Superman titles and still have a quarter
left over.
Being in black-and-white doesn’t
give Bizarre Heroes an artistic edge,
either. In fact, it hurts the book con-
sidering the bland, indistinct costumes
the “bizarre heroes” wear. Aside from
a few patches of zip-a-tone, this could
be a coloring book.
If you can afford it, Bizarre Heroes
will give you a decent story, if nothing
else. But keep in mind that for $2.50,
you can get at least two decent semi-
legitimate super-hero stories and some
really nice art elsewhere.
GRADE: ! ! 1/2

Comic book fans are such cheapskates.

This is the one hundred and twenty-first post in the Entire Kitchen Sink blog series.