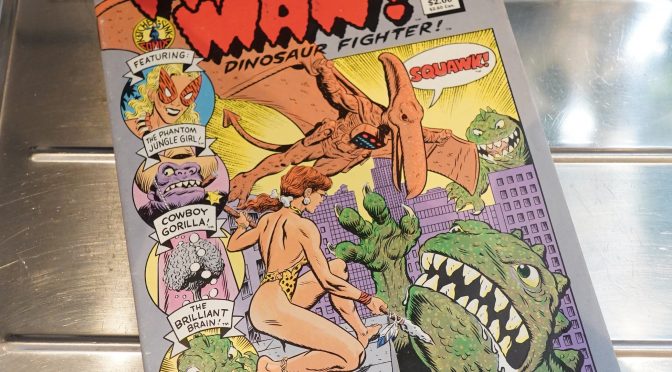 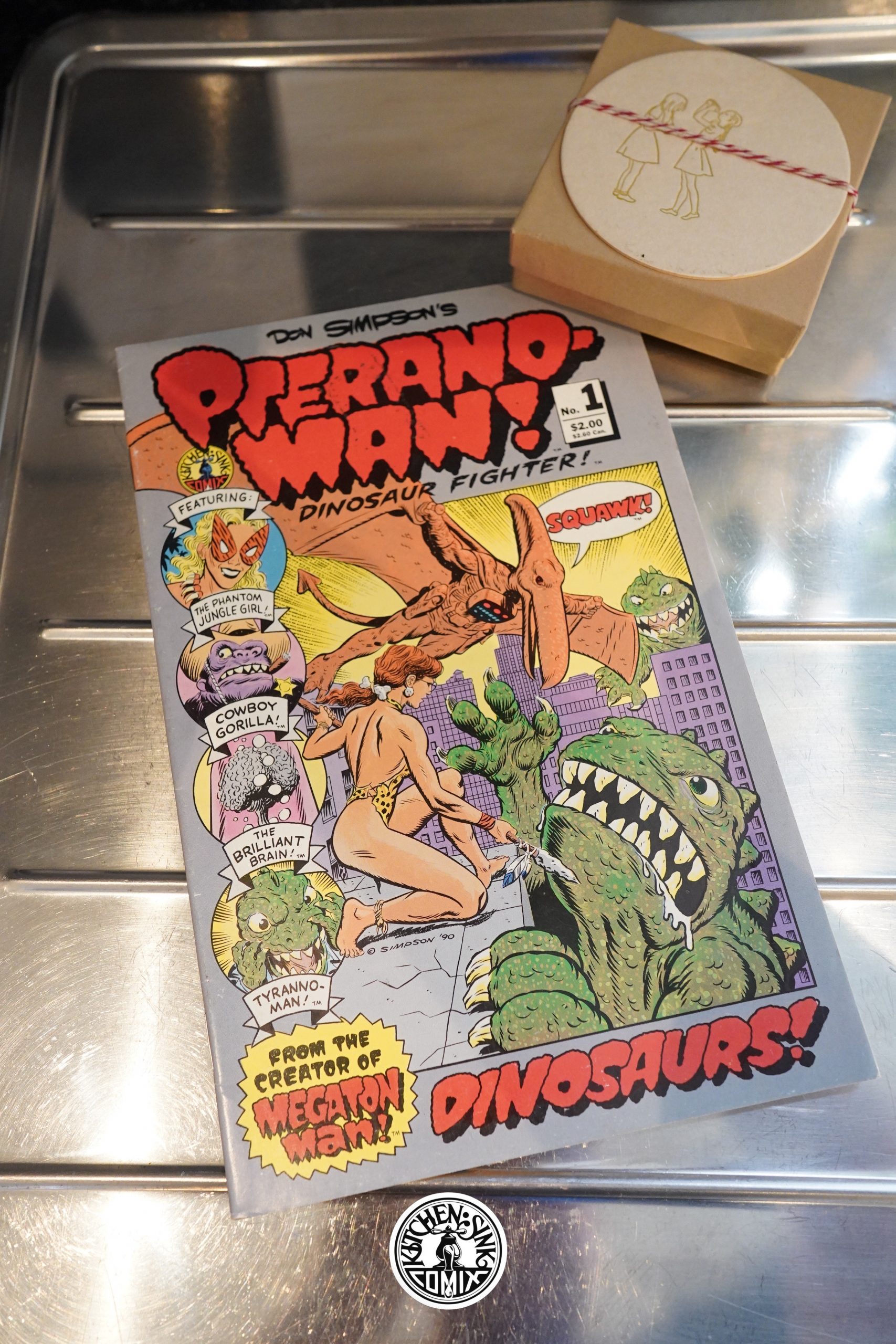 The month after launching Bizarre Heroes, we get another Simpson series. So either he was really gung ho about all of this, or he was hedging his bets. 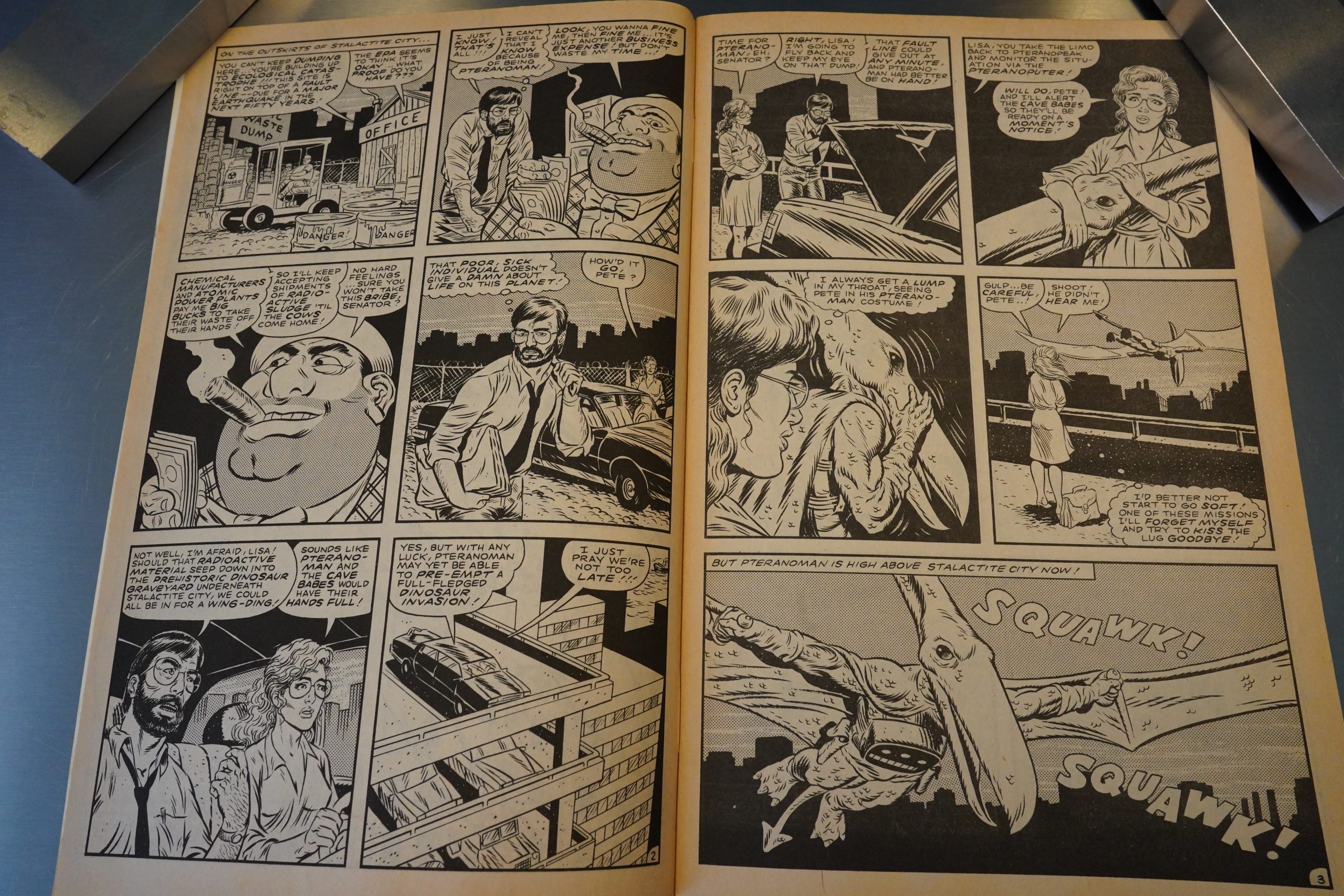 But perhaps Pteranoman was just bits that Simpsons was doing while procrastinating about doing Bizarre Heroes. While that series felt very worked-through, this is a lot goofier — feels very improvised. 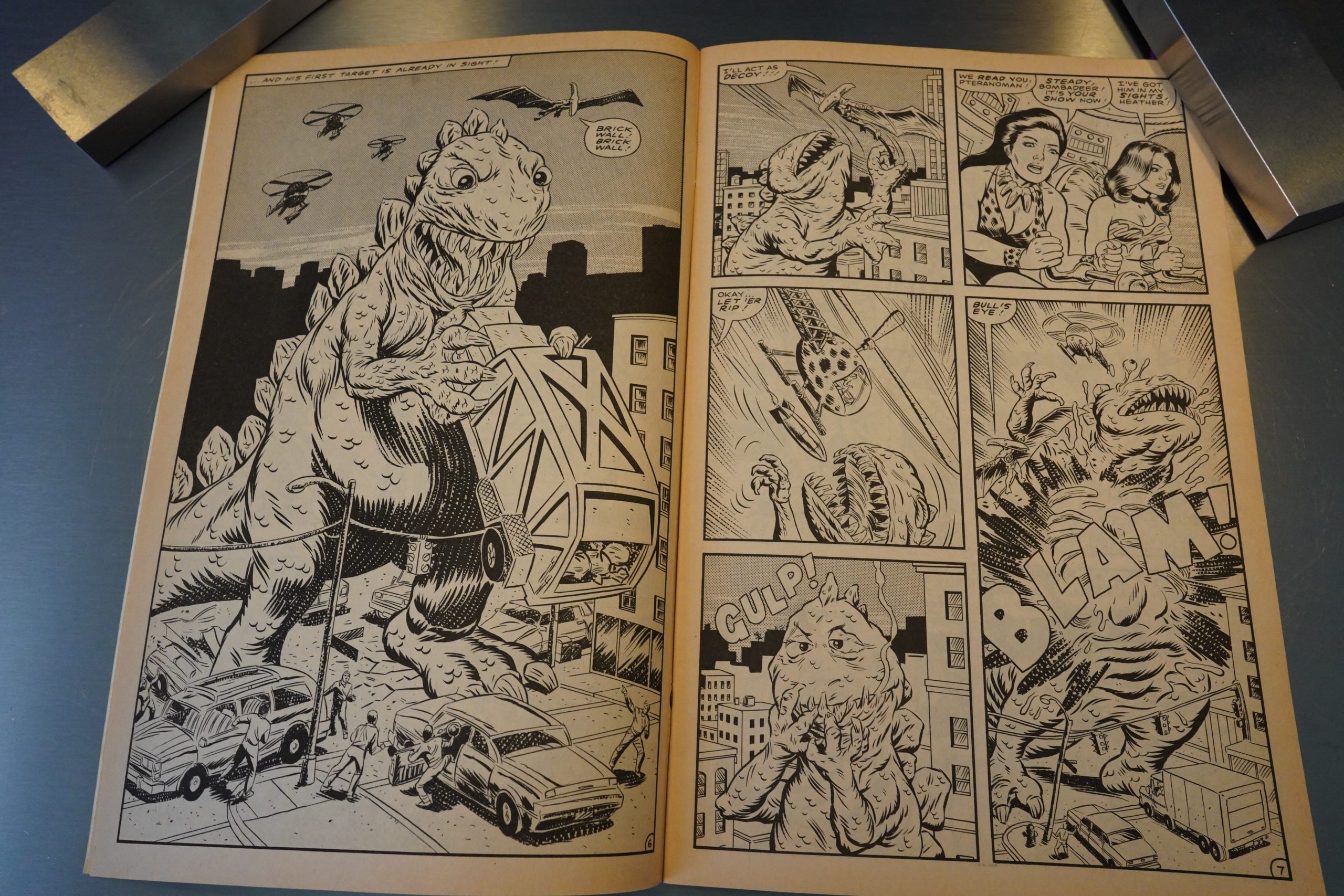 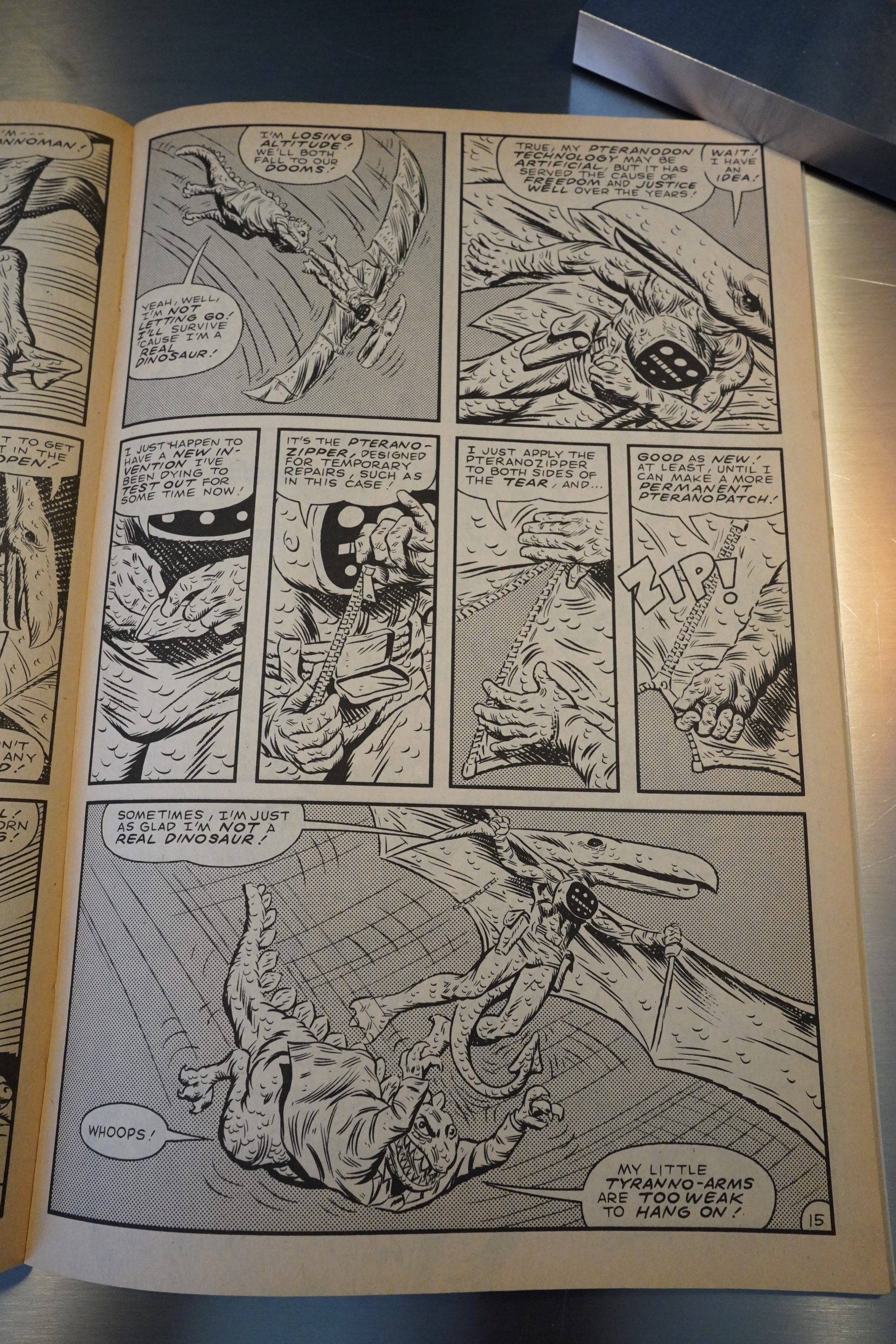 Some of the goofy bits feel positively inspired, and while it doesn’t really add up to much of anything, it’s a good read. 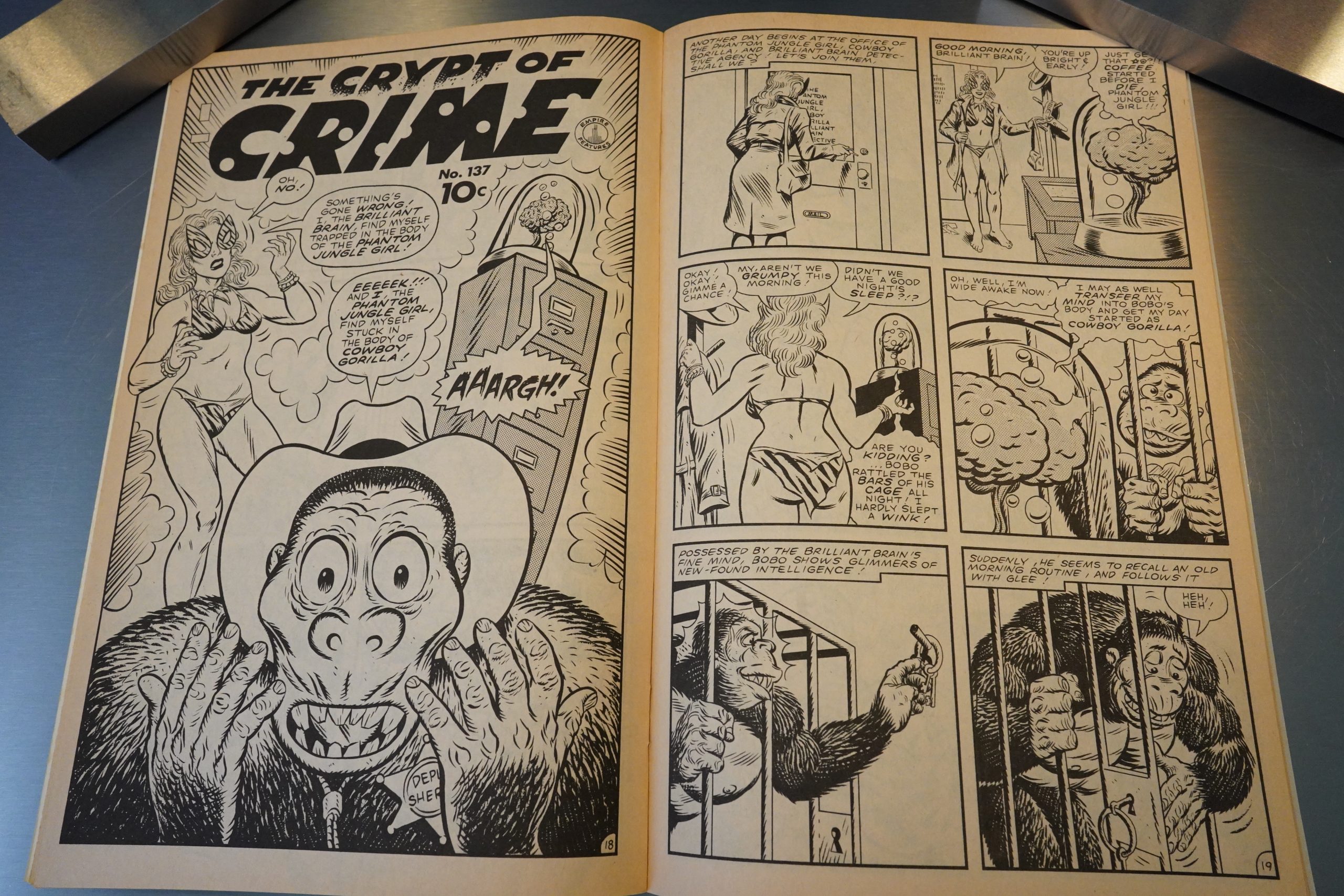 Oh, yeah, he manages to squeeze in three stories here. I think the above is pretty self explanatory. 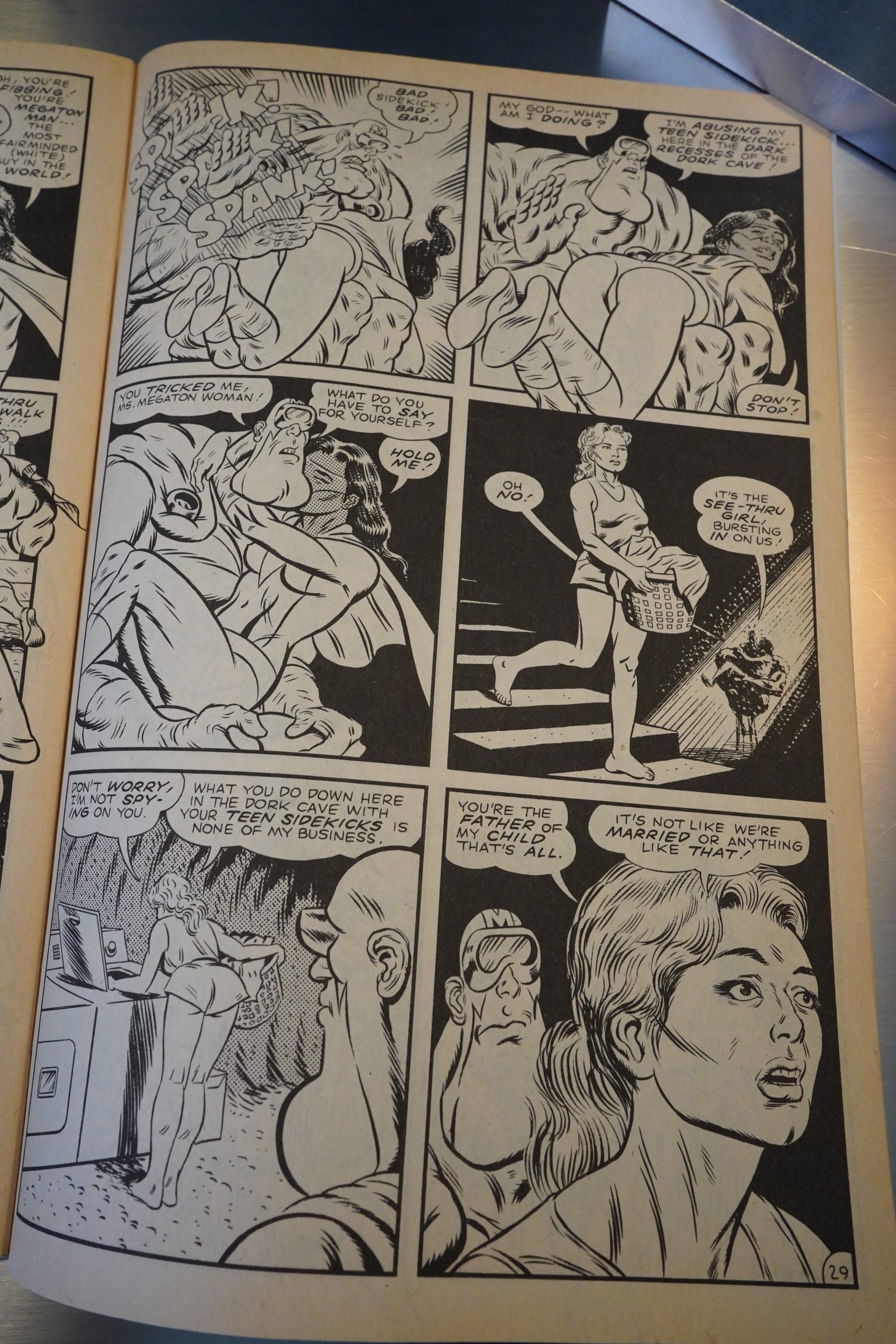 In the final story, he continues the Megaton Man epic a bit.

All in all — nice artwork, amusing stories, some interesting concepts — it’s pretty good? But I can see why there wasn’t a second issue: 1990 wasn’t a forgiving time to launch something as quirky as this.

More importantly, Simpson
doesn’t respect superheroes. Some-
times he stops snickering long enough
to turn out a space soap like Border
Worlds or 1990’s Bizarre Heroes, a
largely mirthless. superhero comic
with a high fight-quotient and no Yarn
Men anywhere. But no sooner was
Bizarre Heroes on the racks than
Simpson countered it with the far bet-
ter Pterano-Man. Once again, that’s
Pterano-Man, a.k.a. Pete Teriano,
“liberal senator from Stalactite City. ”
With Pterano-Man—gotta love it—
Simpson softened the manic humor
that marked Megaton Man. “I decided
I wasn’t going to push the comedy,”
Simpson says. The result, inspired by
the deadpan camp of Twin Peaks and
the Batman TV show, is a delightful
pastiche of cornball comics, in which
Pterano-Man and his Cave Babes use
Pteranocopters, a Pteranoputer and
other Pteranostuff to fight a dinosaur
revived by toxic waste. Elsewhere in
the book, we meet the crimebusting
team of the Phantom Jungle Girl and
Cowboy Gorilla, who take direction
from a brain in a jar called the
Brilliant Brain.
“I’m very proud of Pterano-Man,”
Simpson says. “l think it’s one of the
best comics I’ve done. Unfortunately,
it was also one of my poorest-selling
Kitchen Sink titles. ”
Pterano-Man probably best reveals
Simpson’s approach to superheroes:
Gentler than Megaton Man, but still a
few thousand leagues from the
Punisher, Wolverine or the Dark
Knight. Forget those guys—Simpson
couldn’t even draw the Teenage
Mutant Ninja Turtles with a straight
face; his best freelance work for
Mirage has been a tale of the
“alternate turtles,”
four grumpy
stand-ins.
“The whole superhero genre is just
funny to me,” he says. “At the same
time, the underlying symbols and
mythology are fascinating. ”
By symbols and mythology, he
doesn’t mean the bat on Bruce
Wayne’s chest and the night life in
Asgard, As a satirist, Simpson looks a
little deeper into what makes super-
heroes tick. His observations won’t
please many X-fans. In fact, it’s safe
to say—with apologies to Spirit cre-
ator Will Eisner—that this is not a
theory for little boys.
“This literal interpretation of su-
perheroes dominates Marvel and
DC,” Simpson explains. “The editors
ask very literal questions: ‘What if
Batman really existed? How would
the universe be different?’ They’re not
aware how dumb that is.
“The last thing superhero stories
are about is crime,” Simpson contin-
ues. “To me, they’re a sex fantasy.”
As Simpson describes it, super-
heroes are generally ordinary
schmucks, little guys like Clark Kent
and Peter Parker, who react to ex-
citement by leaping into alleys and
tearing off their clothes. Then. they get
much bigger, and all their muscles
and veins stand out. Sound familiar?
“It seems pretty clear to me what
that’s all about,” Simpson says. “The
most blatant image is the Hulk: The
idea that he has to rip out of all his
clothes to leap into action, and the ex-
aggerated musculature, the popping
veins. After my Anton Drek work, I
know how similar drawing that su-
perhero anatomy is to drawing the
veins in a throbbing…” Well, you get
the idea.

This is the one hundred and twenty-second post in the Entire Kitchen Sink blog series.