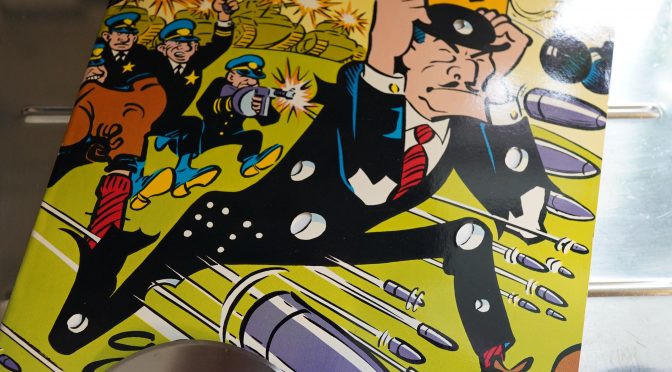 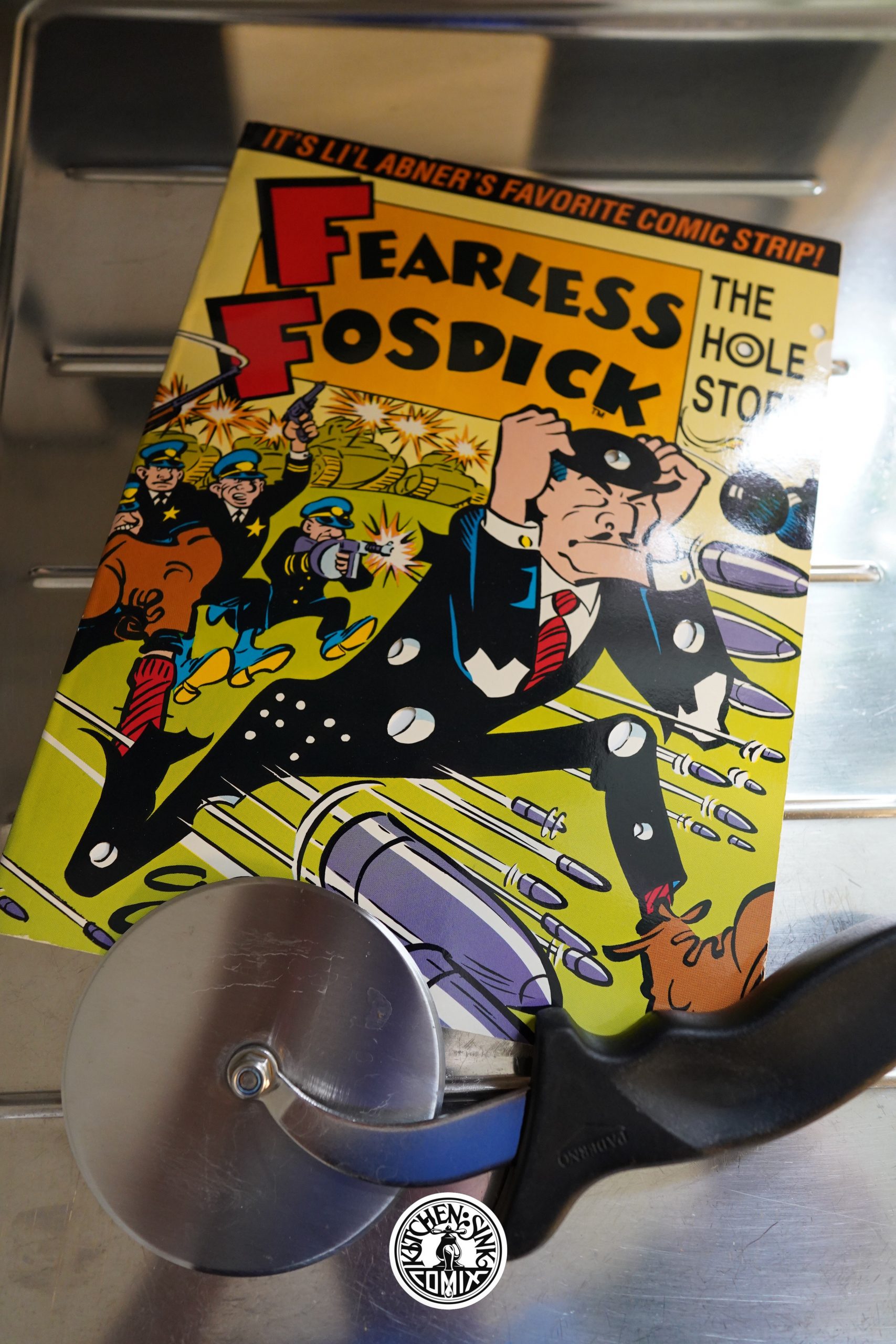 The cover here is kinda fun — those holes in Fearless Fosdick are die cut. 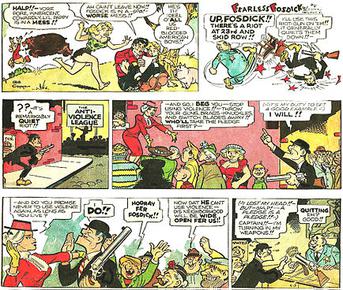 These strips originally ran as a strip-within-the-strip in Lil Abner. Kitchen were collecting all of those anyway, so I guess it makes sense to do a separate collection of the Fosdick stuff (even if people who already had the Abner collections already had all these strips). 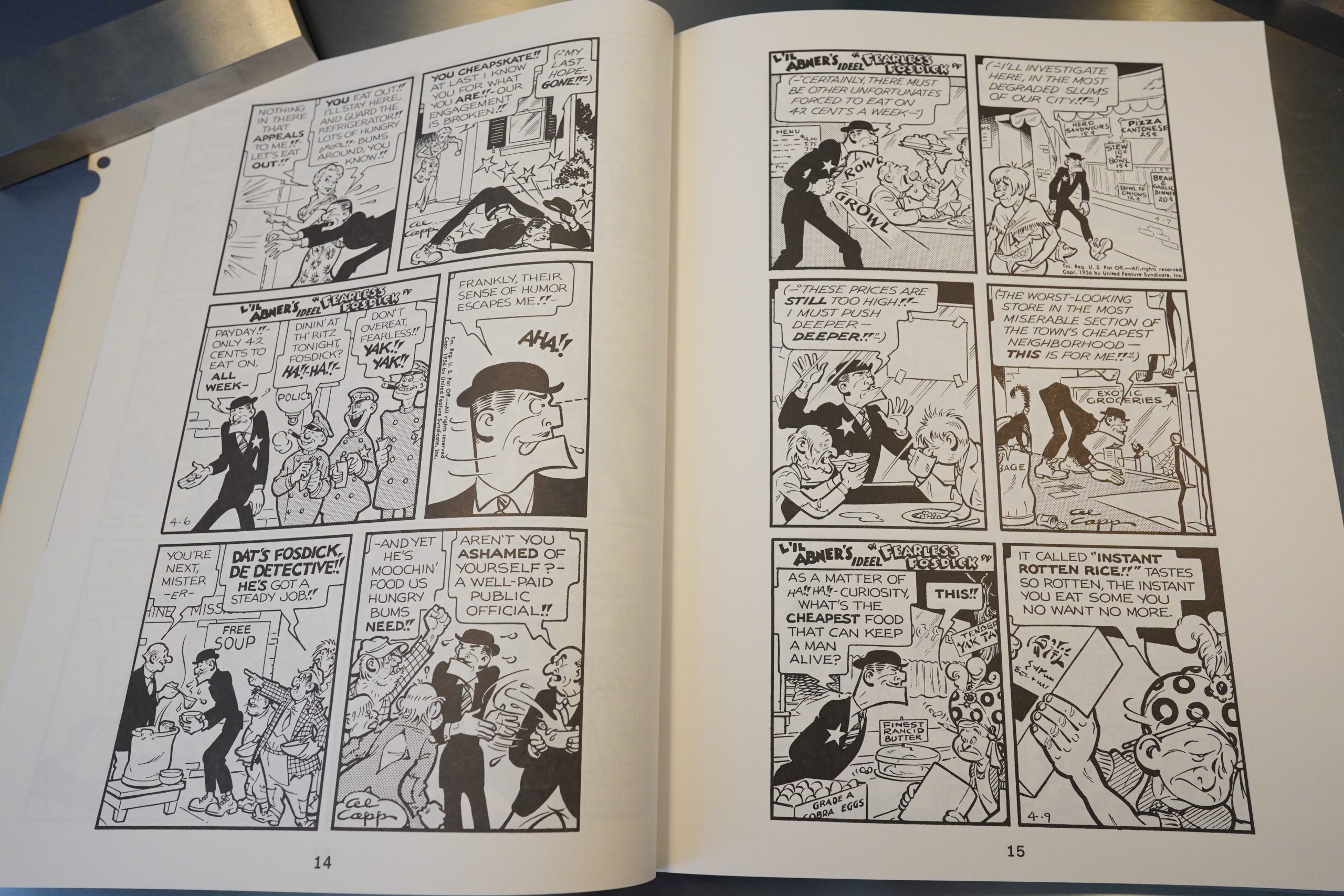 Reading these Chester Gould parodies out of their natural milieu works fine… I guess… but I’m not much of an Al Capp fan anyway, so I don’t really have anything to say. 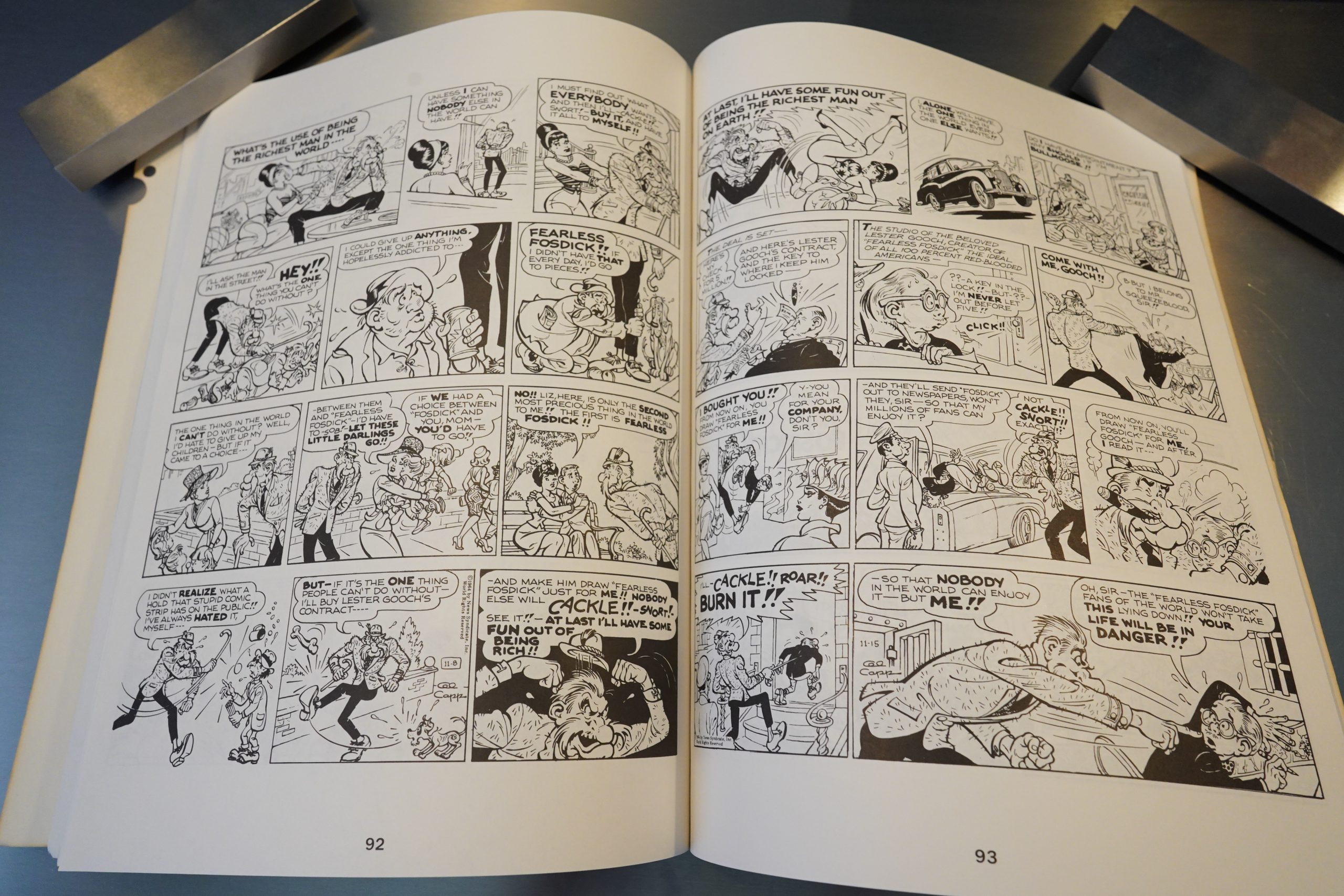 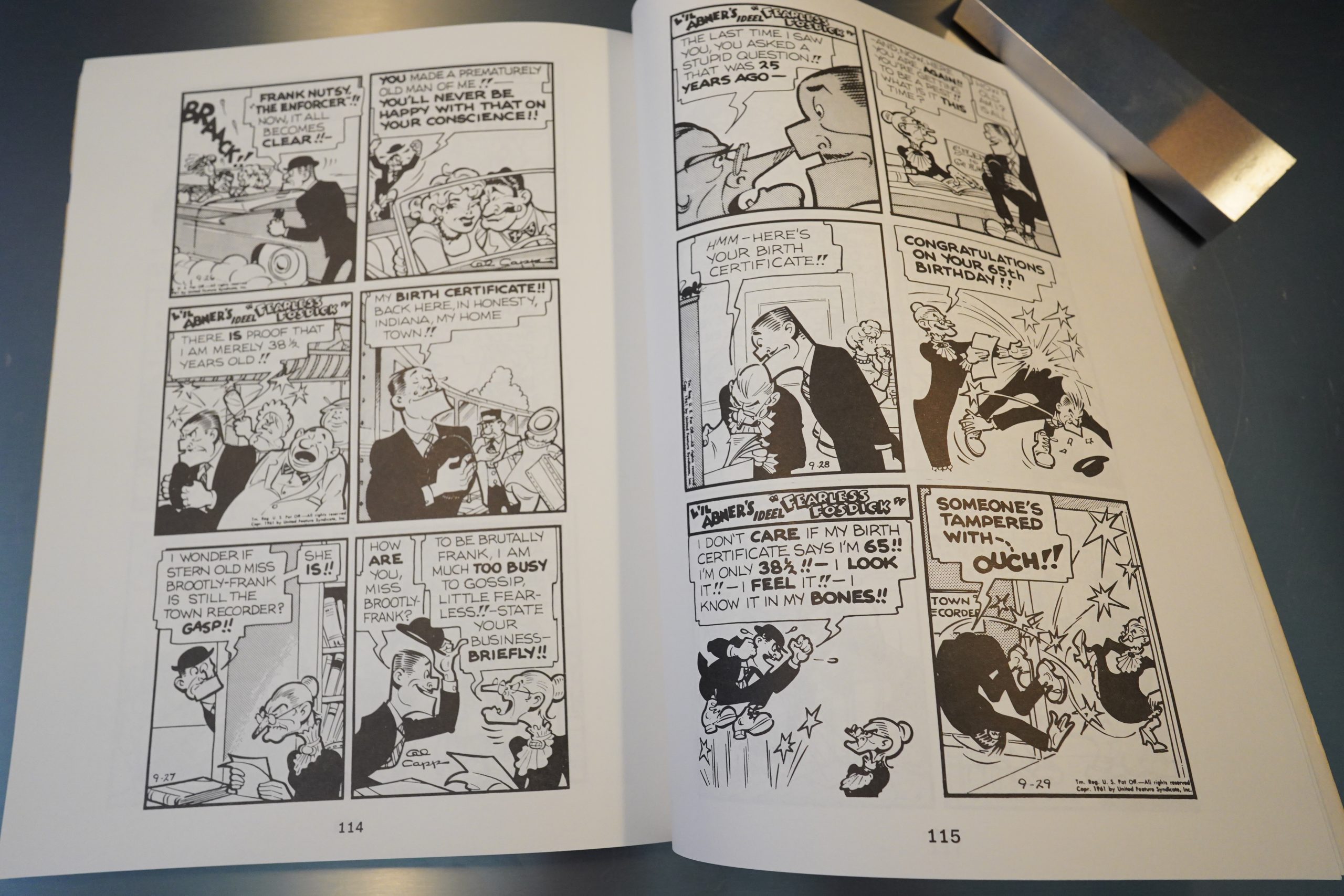 I know that most of you
felt like you were force-fed the “Tracy
craze” (Batman this wasn’t), but if
you’re looking for something a little
different from the mainstream Tracy
junk, this anthology from Kitchen
Sink may be just the thing.
The character Fearless Fosdick is,
clean and simple, a takeoff on Chester
Gould’s Dick Tracy. Created as a strip-
within-a-strip in 1942, Fosdick was
Li’l Abner’s “ideel.” According to
Max Allan Collins, Fearless Fosdick
was initially designed as a “one-shot
throwaway affair” that evolved into a
running parody of the square-jaw de-
tective that would last into the ’50s.
Fosdick is identical to Tracy except
that his jaw was squarer, his hat was
yellower—actually, Fosdick was more
Dick Tracy than Tracy himself. SNO
gimmick was left untried; Gould’s
signature, and even Gould himself
were fair game as Fosdick’s eccentric
and slightly insane comic-within-a-
comic creator Lester Gooch made fre-
quent appearances.
Fosdick’s adventures, not unlike
Tracy’s, were done as cases, and five
of them are presented in Kitchen
Sink’s offering. And, as in Gould’s
strip, the villains are.. .well, al-
most.. *grotesque, or at least Lester
Gooch’s definition of grotesque. There
is Anyface, whose name is self-e»e
planatory; Sidney the Crooked Parrot;
the Atom Bum, who could blow up
at the drop of a pin; and the most
twisted of Capp’s villains, the Chip-
pendale Chair (you’ll have to read
this).
Capp also parodied the violence in
Gould’s strip. In fact, he parodied it
and parodied it and parodied it to
death. Capp’s one undoing is that he
didn’t know when to stop. Fosdick
killing civilians in the line of duty is
funny once, maybe even twice, but
after the umpteenth time it wears thin.
In fact, interruptions in the Fosdick
strip by Abner waxing his faith in his
“ideel” were most welcomed by me.
Then again, if you’re a huge Tracy
fan, the excessiveness might work for
you. Which brings me back to the be-
ginning: Fearless Fosdick only func-
tions and thrives in the context of Dick
Tracy, and, in this case, the movie. So
love Tracy or hate him, Fosdick could
work for you, but if yellow fedoras
don’t do anything for you, neither will
Fosdick.

Ah! That explains a lot: This book was published to cash in on the Dick Tracy (the movie) craze at the time (which I didn’t really knew existed).

As noted, in real life Fosdick would be a
monster. In a live-action movie he would be hor-
ribly menacing. But in Capp’s strip he comes
across as what he is; an abstraction, the logical
extension of a certain idea, a certain legal theory.
Thus, it is absurd to maintain that he is either
sympathetic (as Collins does) or unsympathetic.
He is neither; he is an inverted “ideel,” a
satirical construct. Of course, according to the
current critical cant, to say that a character is
an abstraction is to condemn his creator;
everybody, low-, high-, and middle-brow, wants
his characters “realistic” these days — which
is one reason why satire is practically a dead art.
On the other hand, one could argue that even
satire, no matter how abstract, presents, like
every other artform, a view of reality; and that
the “universe” presented in Fosdick is one in
which life is cheap, pointless, and meaningless.

This is the one hundred and fourteenth post in the Entire Kitchen Sink blog series.