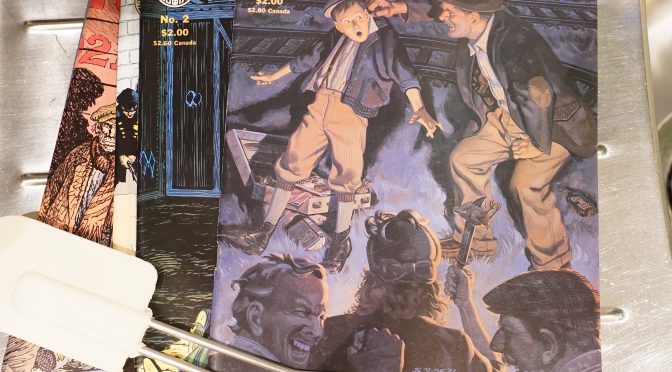 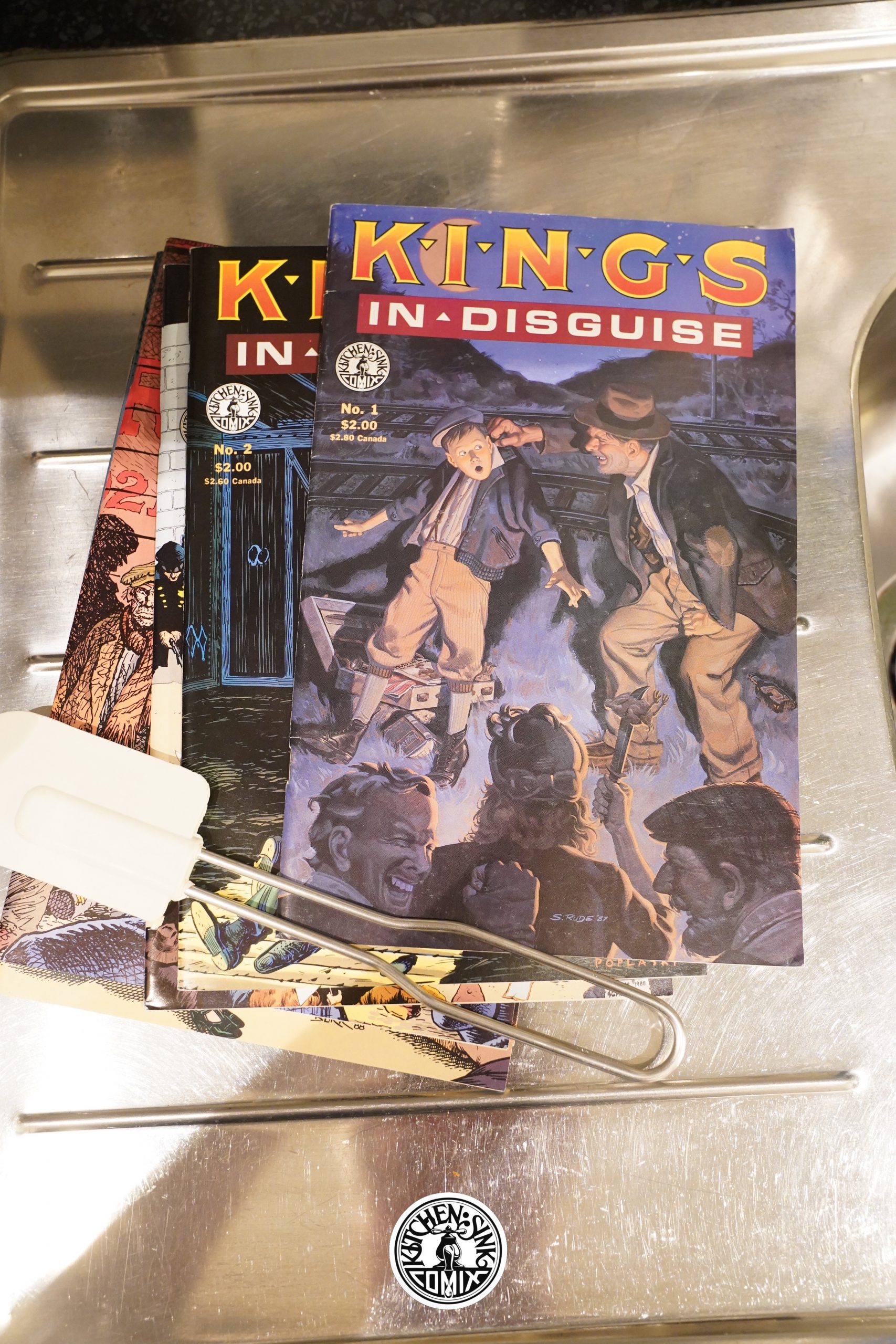 I remember this being a kind of big deal at the time — it’s one of the first American non genre graphic novels serialised in this way (six 32 page comics). Other publishers were also attempting to, as it were, Maus it up at the time, but most fizzled after a couple of issues, because they didn’t sell in the direct sales market, and the publishers didn’t have the funds to publish them at a loss.

Kitchen, on the other hand, has a pretty good track record in publishing these things — probably because they published many other things (Spirit reprints, tin signs, and soon chocolate bars and the like) to be able to subsidise the more serious comics.

(In a letters column, the editor says that Kings in Disguise (surprisingly) didn’t sell that badly, so perhaps that wasn’t actually a factor here.) 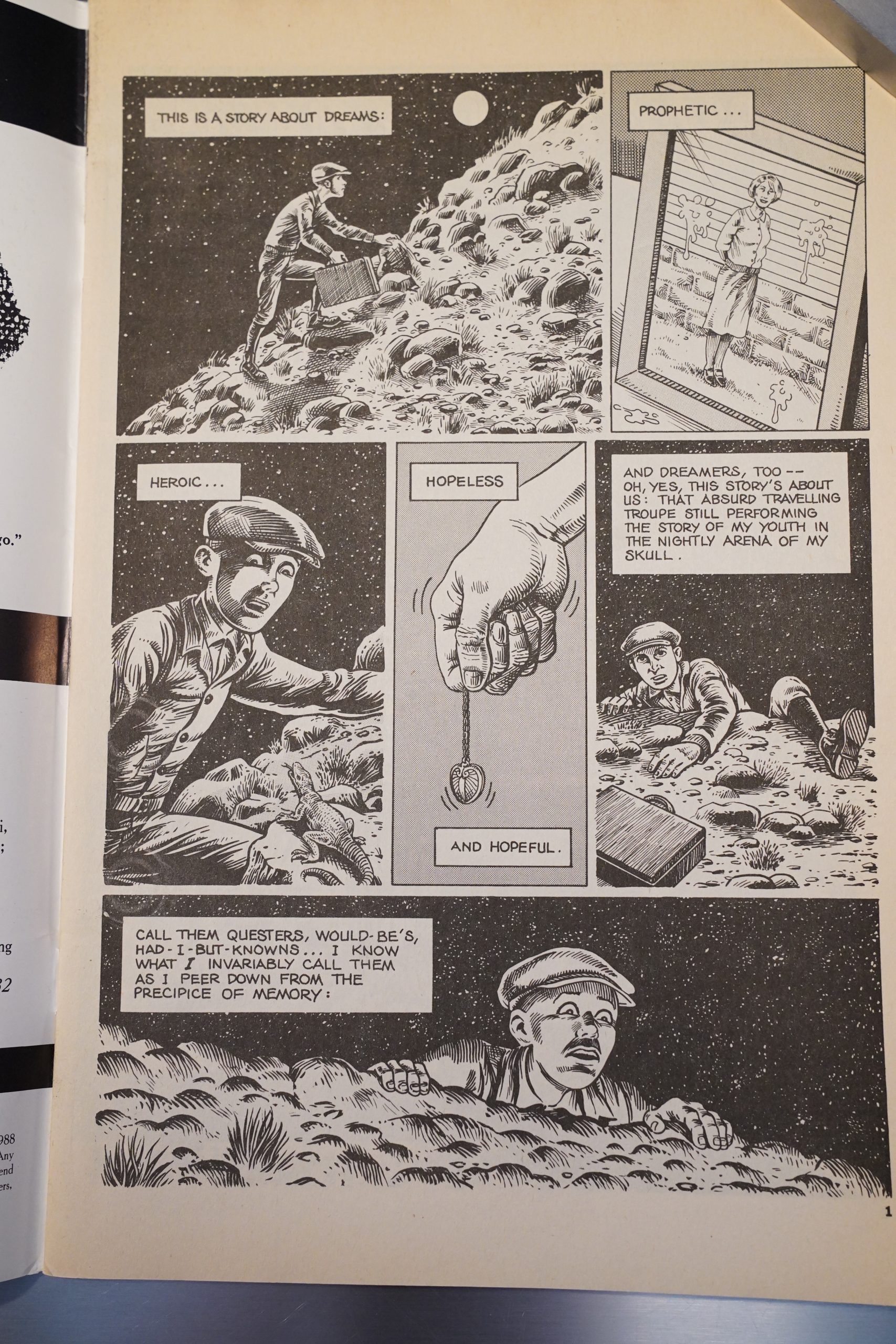 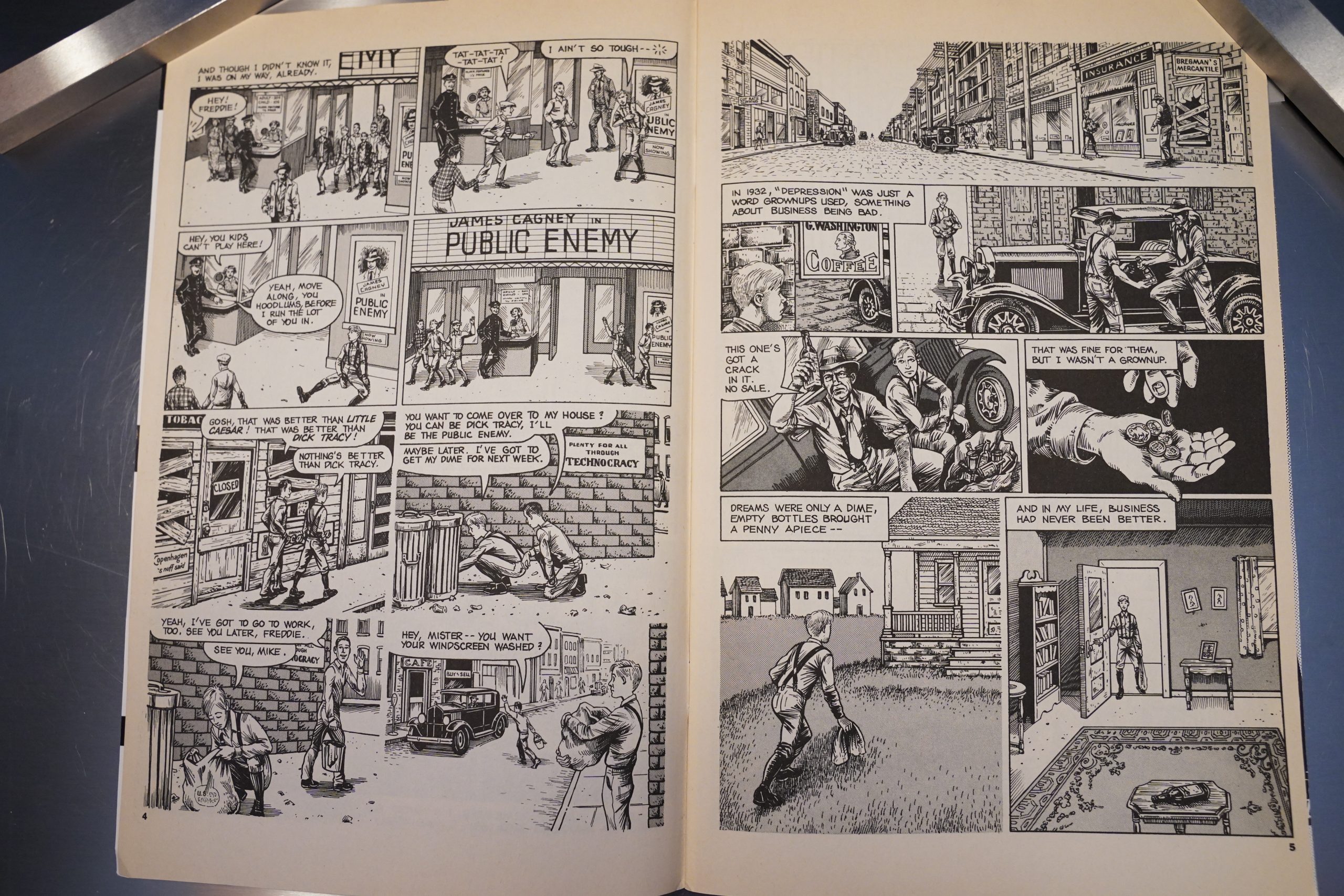 And the reason I didn’t love it is because it’s a bit clunky. Dan Barr’s artwork is perfectly serviceable, but it’s not very pretty or exciting, is it? 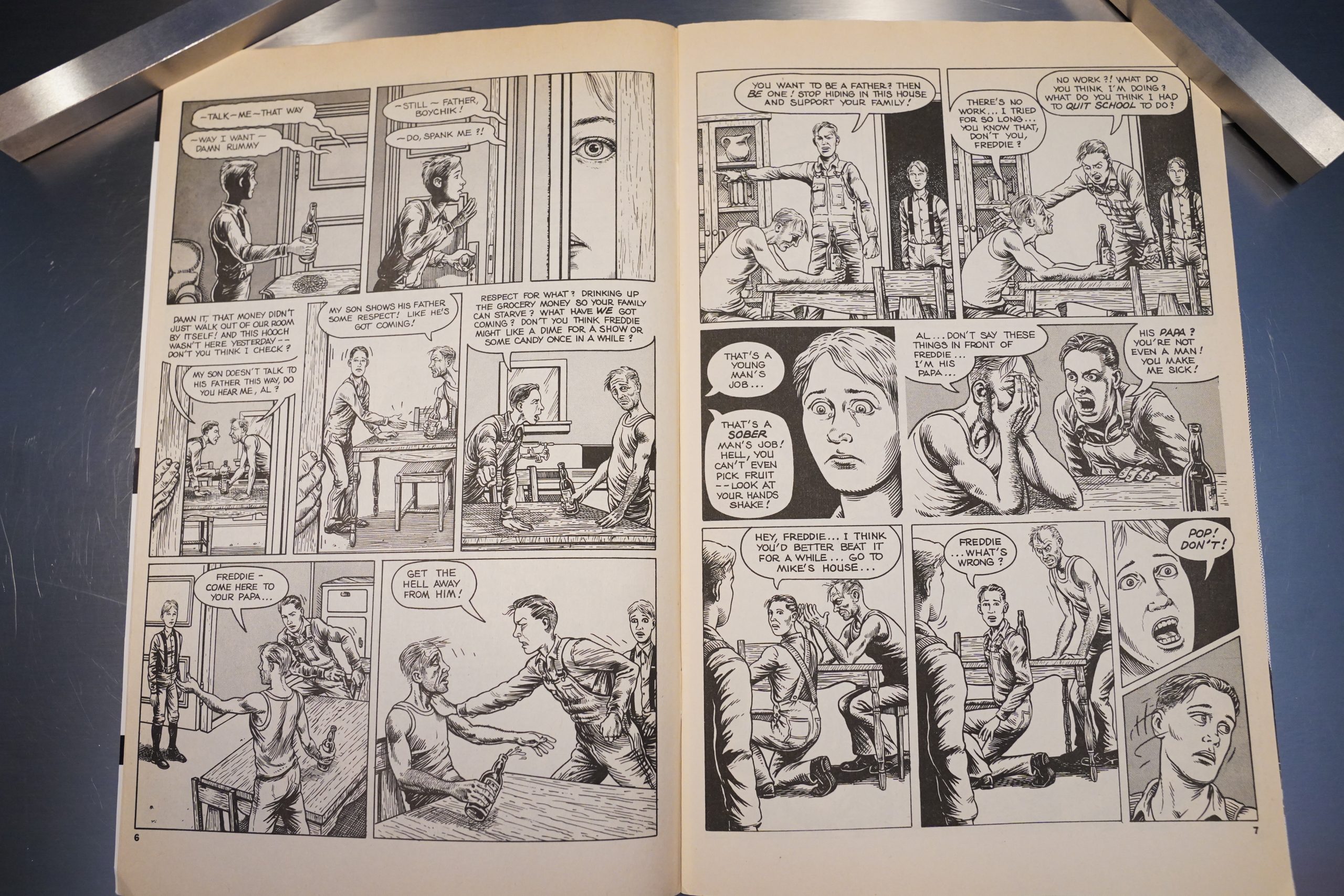 And the dialogue is extremely mannered and unbelievable. These are phrases randomly assembled from memories of how people talk on daytime drama soaps.

Still, you have to hand it to them — this book was very out of time in 1988. It does things that nobody had even shown an interest in doing: A melodrama about being a hobo (that’s what they’re called here) in the 1930s, and not done as an adventure story, but as something that feels more real. 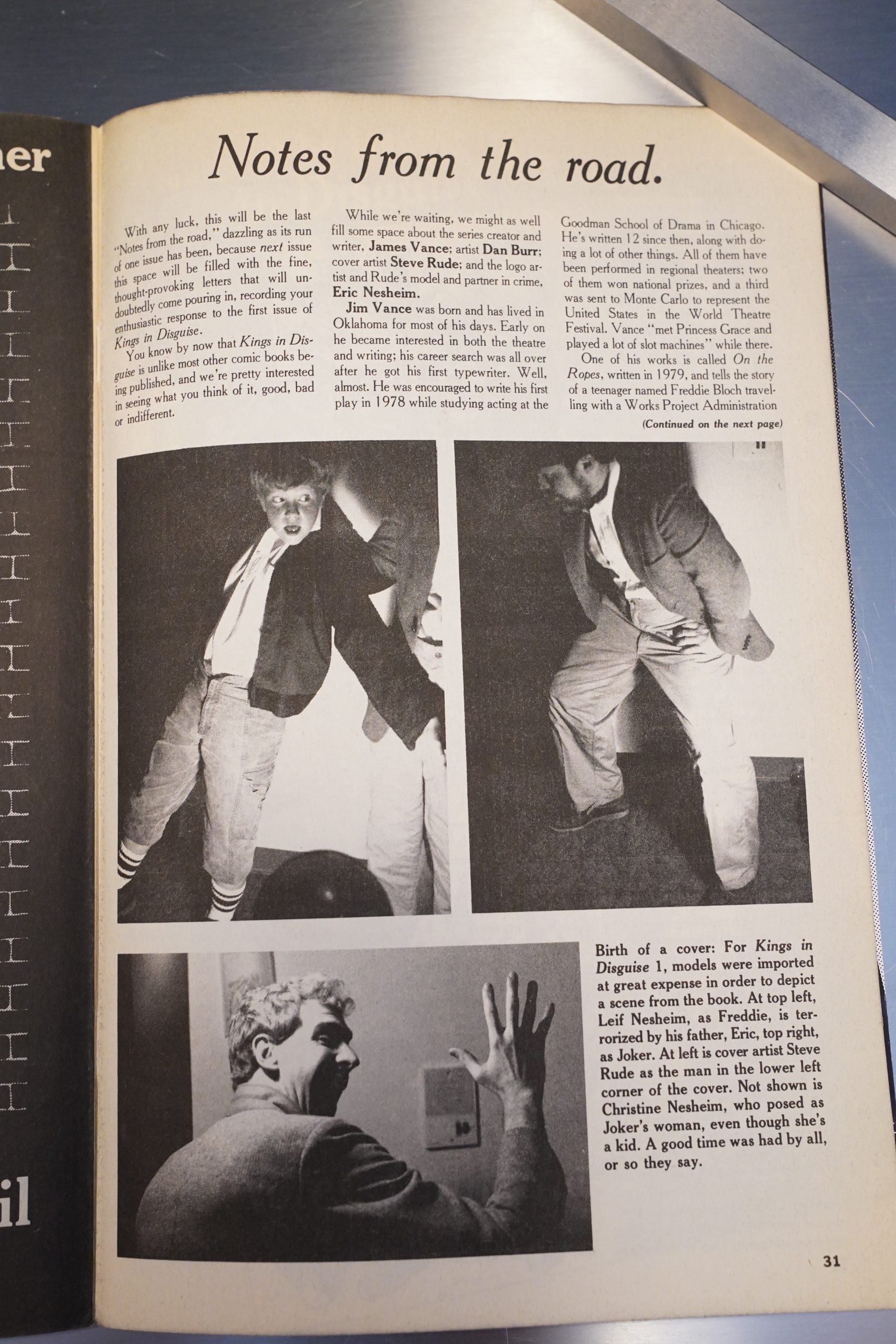 The first four issues have guest artists doing the covers — Steve Rude, Kurtzman, Mark Schulz and Jaxon — which makes a lot of sense from a commercial point of view, but had to sting for Dan Burr. 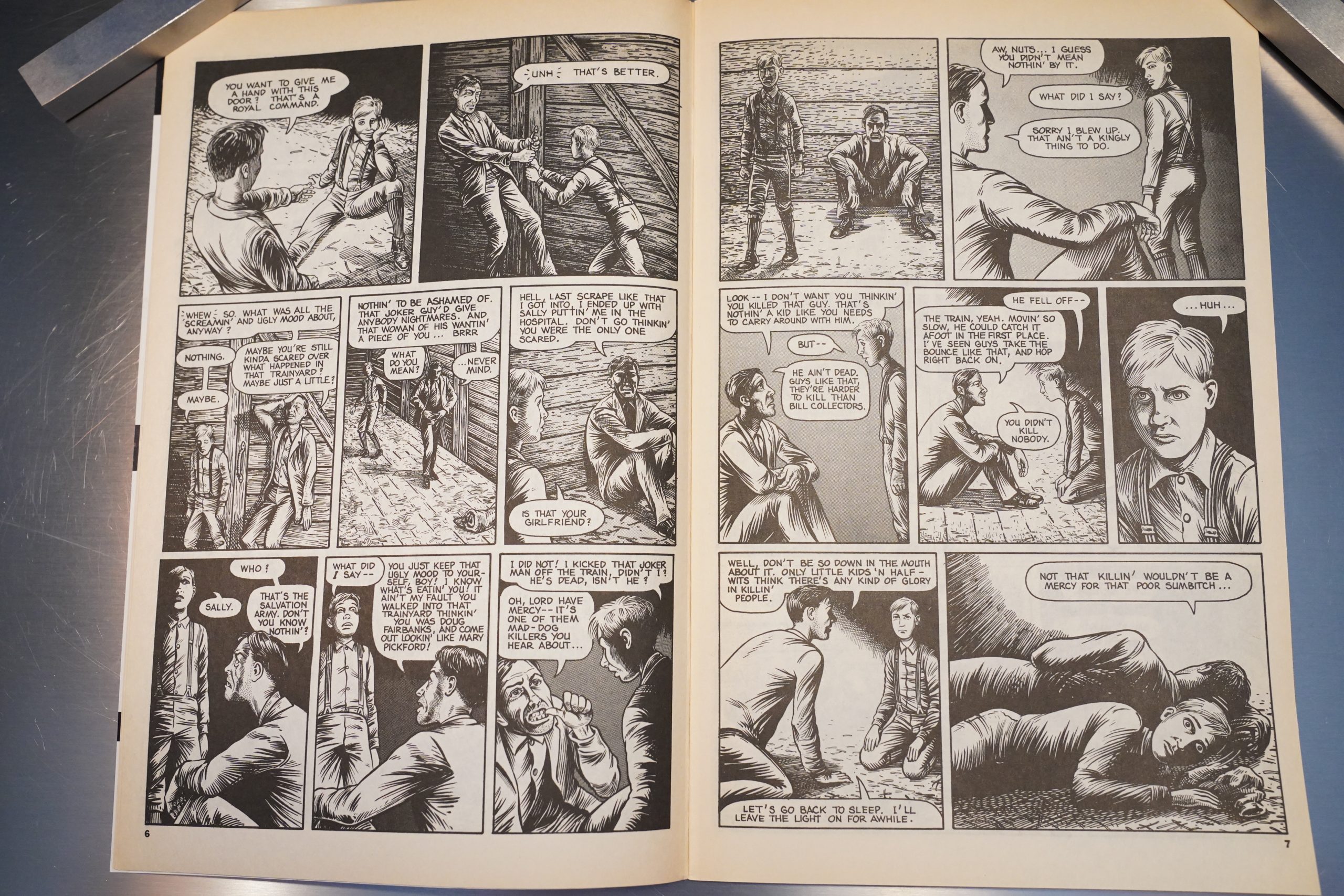 The second issue takes place in a railway car, and was adapted from a stage play that Vance had written several years earlier. And it does read a lot like a play… but it’s good. 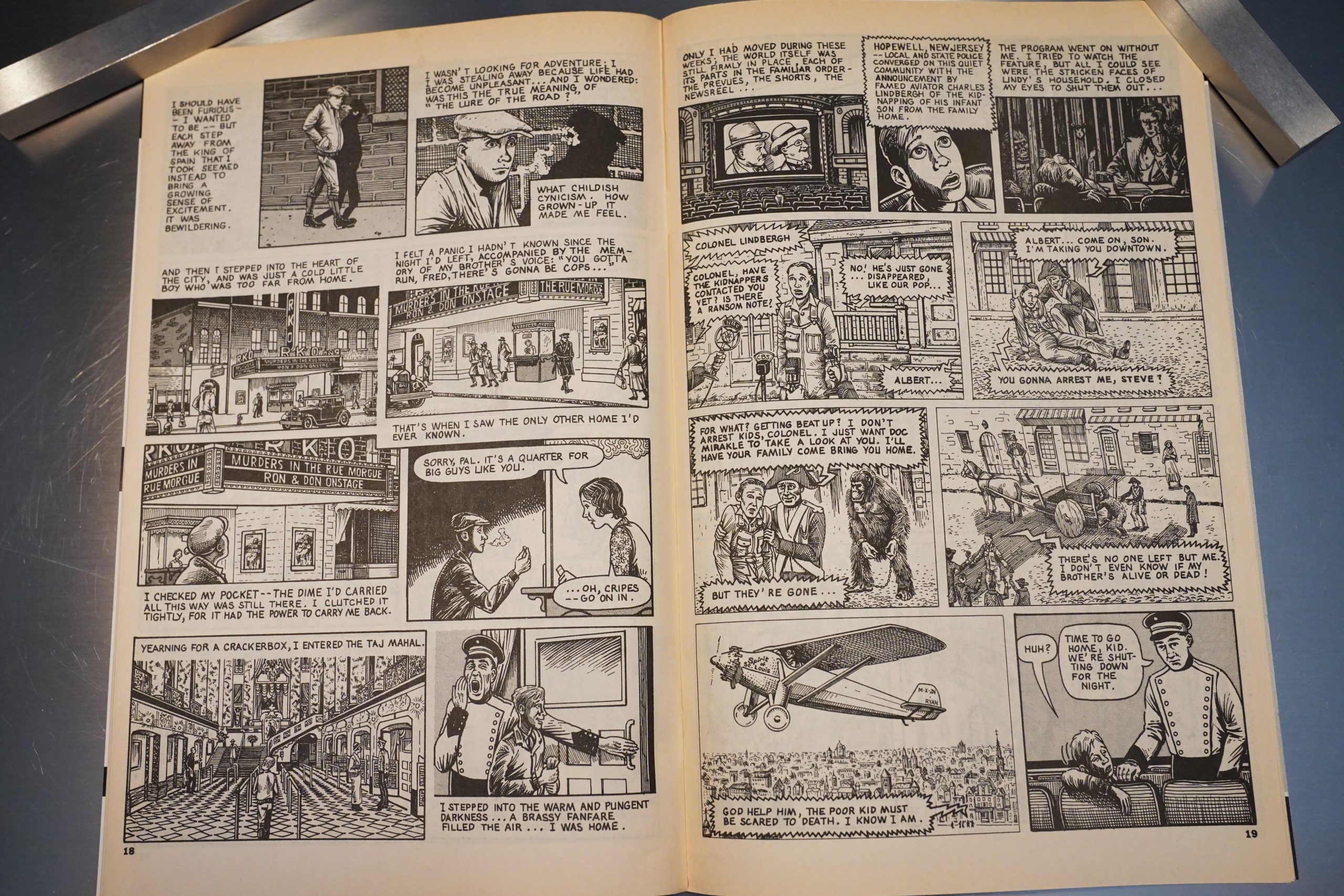 The series is somewhat episodic: Each issue is a distinct chapter, although the series tells one overall story. Reading it now, I did enjoy it, but I have to say that it felt a bit aimless? Like Vance had these scenes in mind, and issues he wanted to cover, but didn’t quite have all the connective tissues in between. 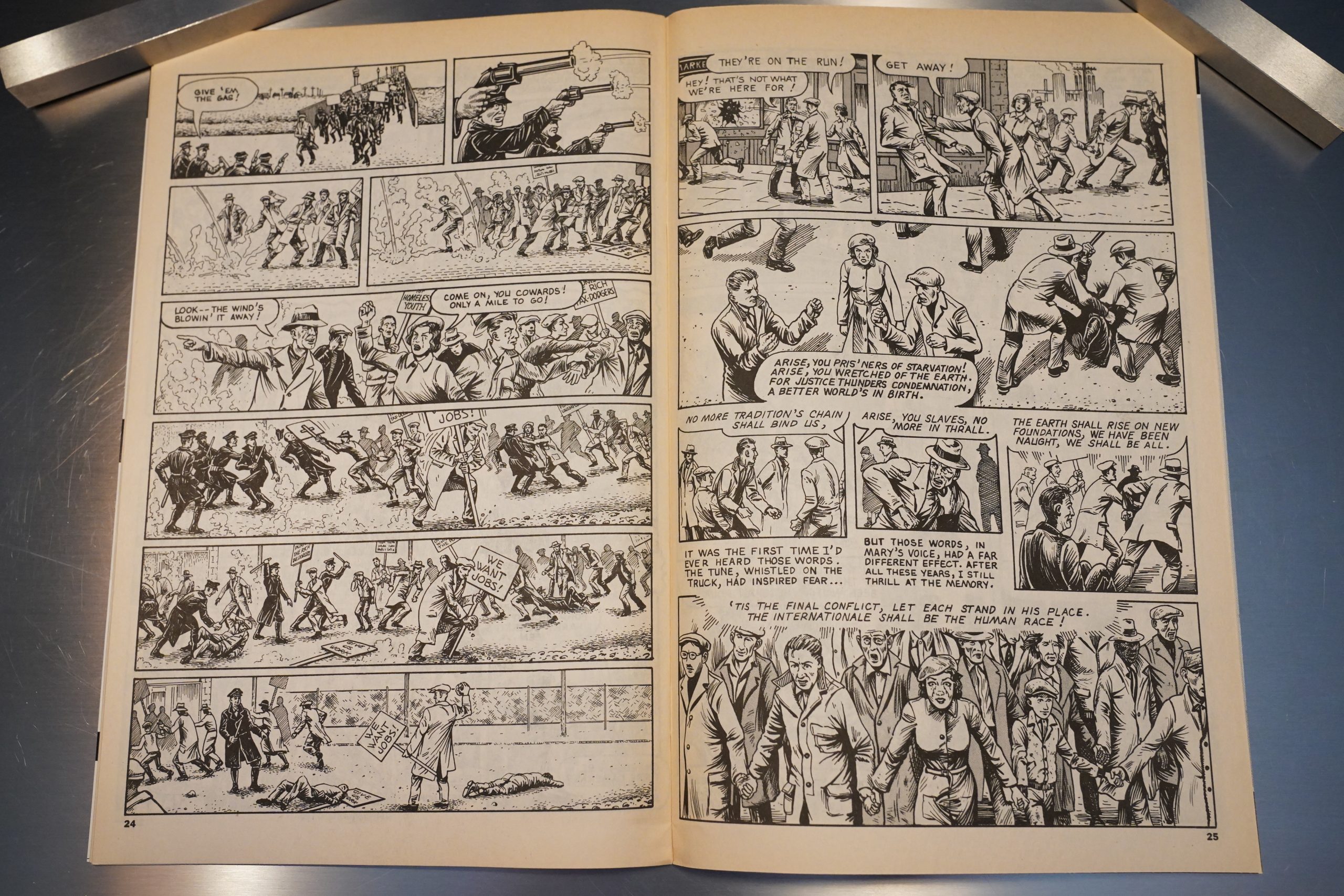 But some of these scenes are pretty powerful anyway. 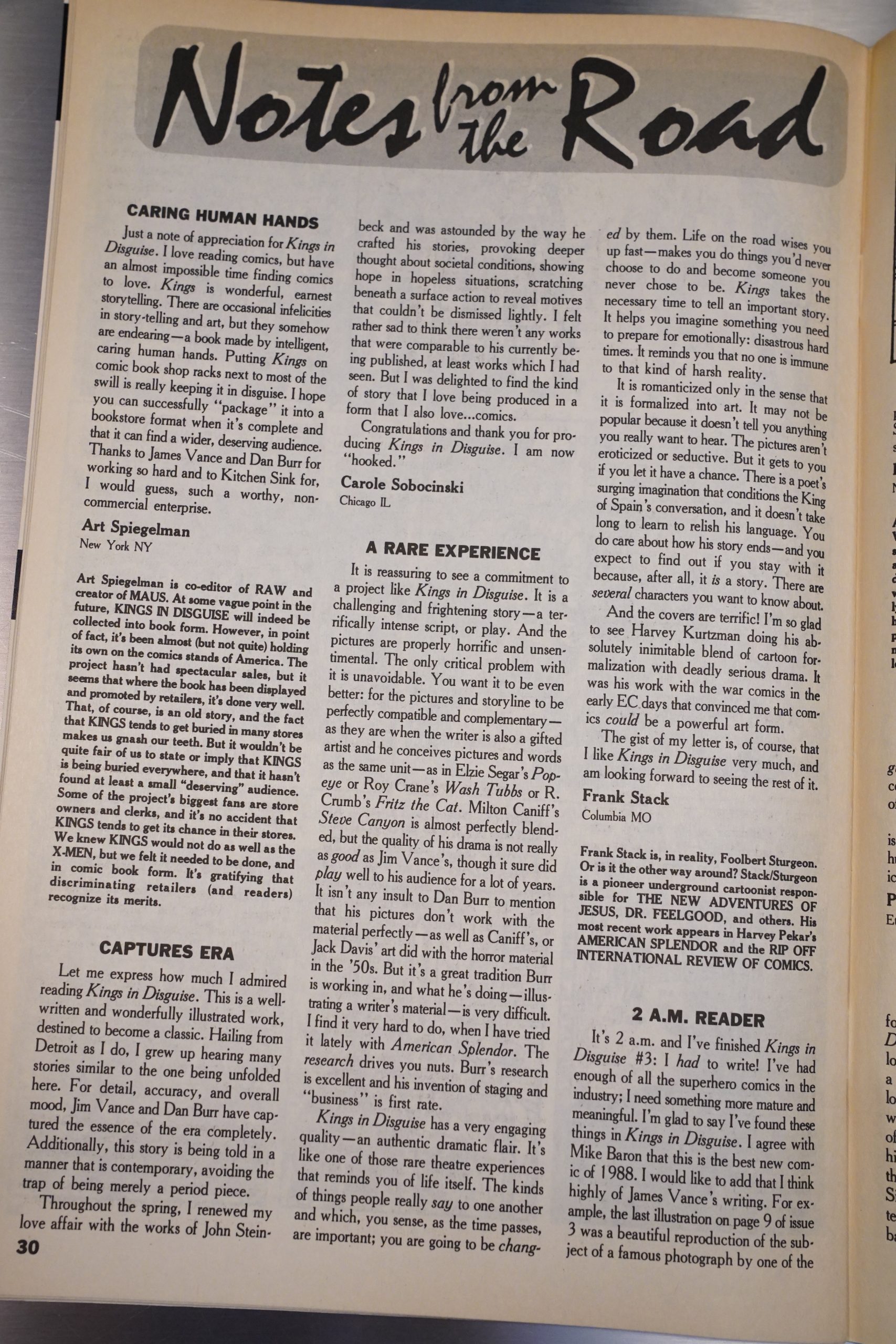 Heh. Art Spiegelman writes in with praise (but with some caveats)… and Frank Stack and Carole Sobocinski. All the famous people are fans. 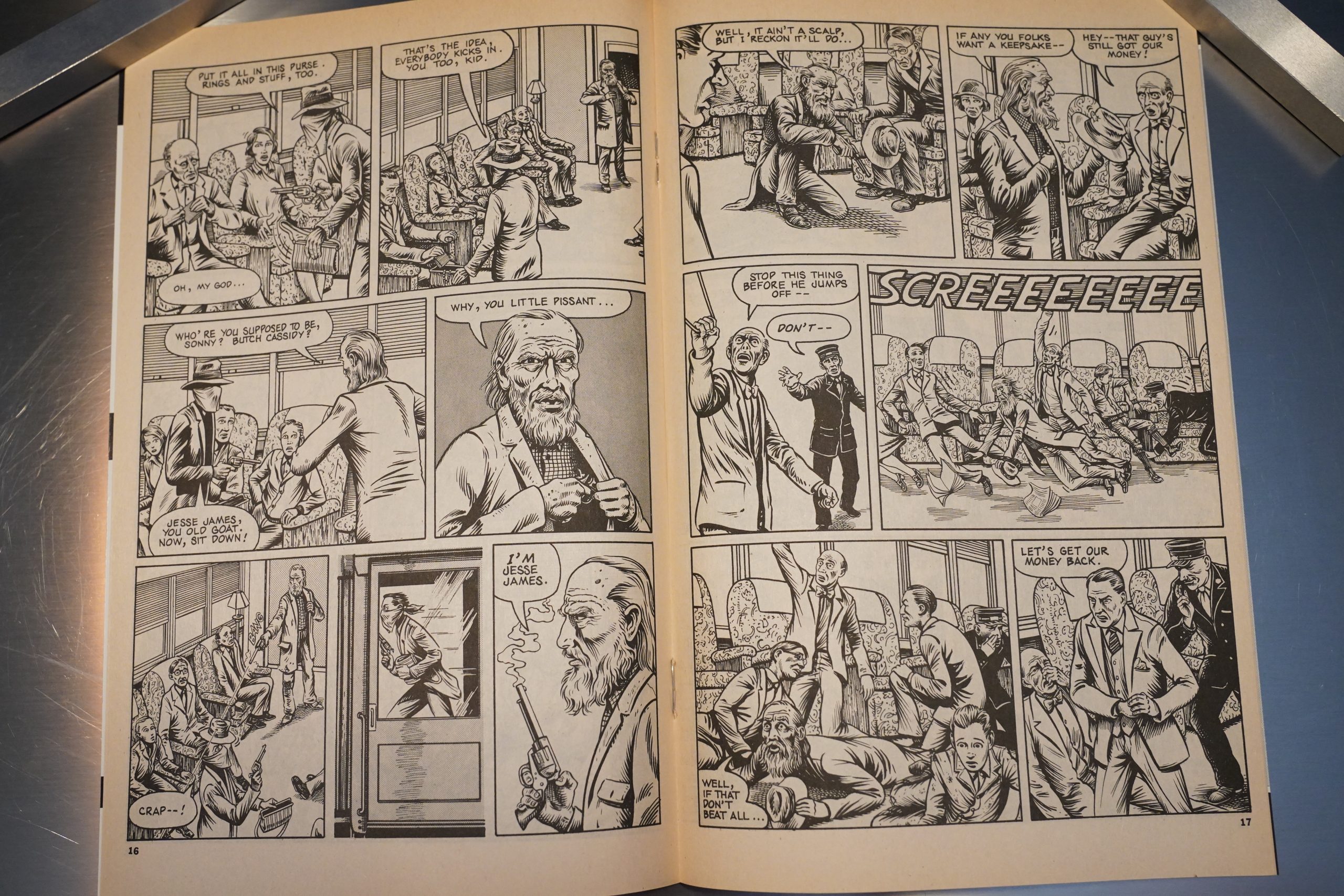 The final two issues are a somewhat separate story about setting up a hobo village, and they randomly encounter a guy who says he’s Jesse James (who turns out to be one of the main characters’ mentor)… Something slightly lacking in the segues here.

As is often the case with series like this, the final issue is published half a year after the previous issue. It’s like when the end is in sight, everybody relaxes a bit, and the issue is going to sell whatever it’s going to sell — you don’t have to worry about affecting the sales of the issue after that, either. 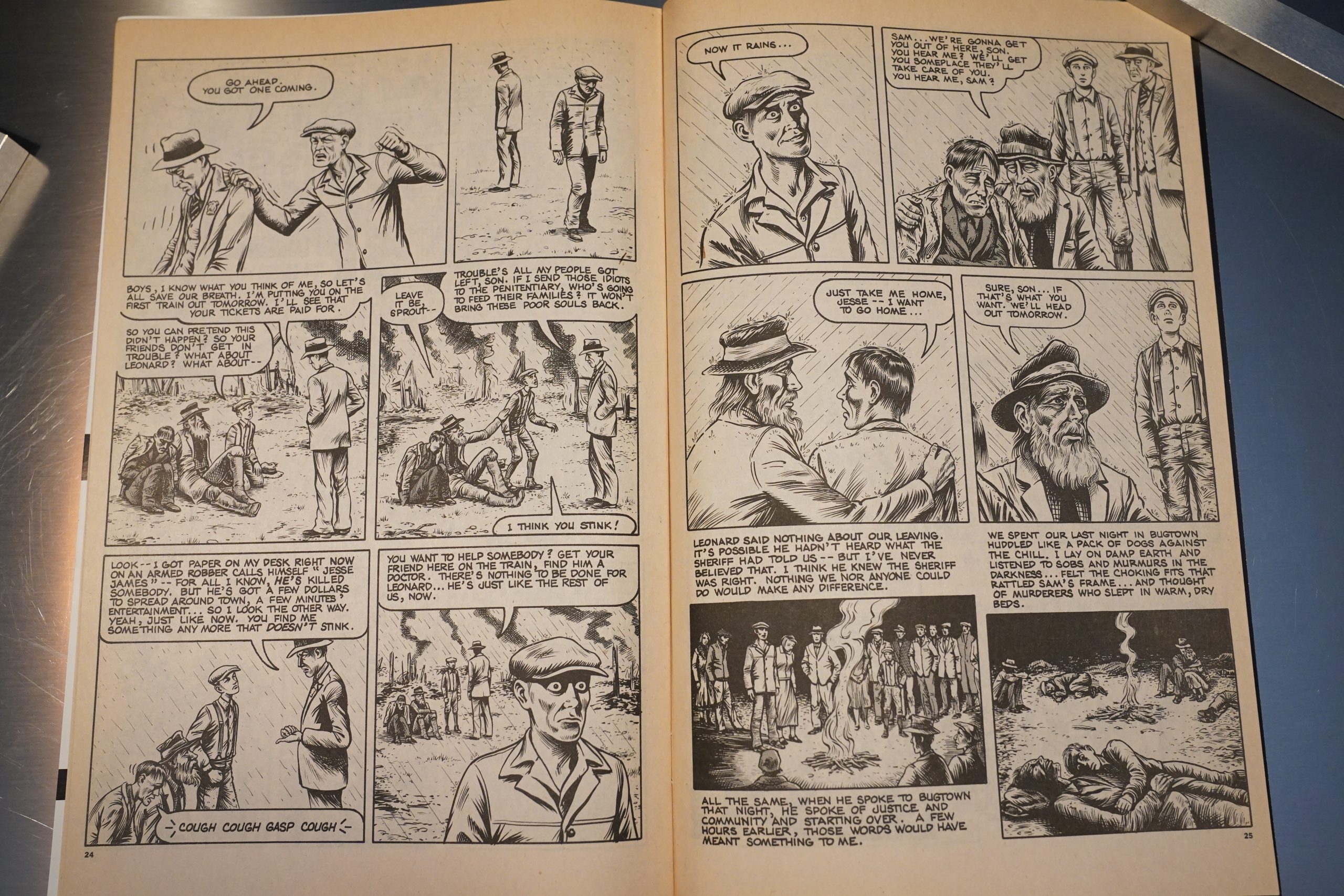 Vance and Burr manage to end things in a pretty satisfactory way — there’s some closure, but not so much that it feels fake. 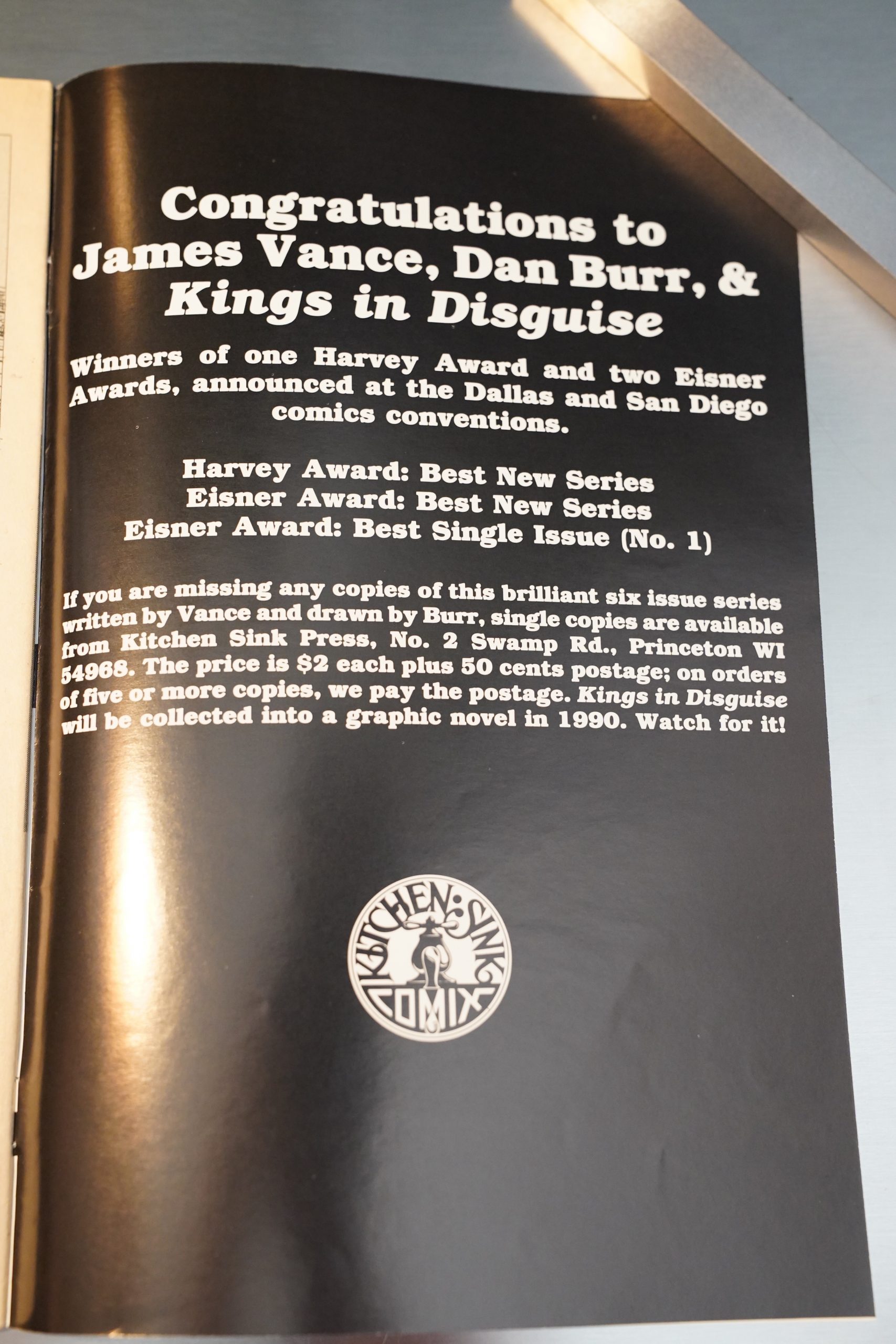 Like I said, this series was a big deal in many ways — it won three awards in the awards season. “Best New Series” is pretty impressive.

Vance and Burr are happy with the
way Kings in Disguise turned out, but
they would still make some minor
changes. “I’m enough of a nit-picker
that I can go back and point out all
sorts of things that I don’t like,” admits
Burr. “I did go back to issue #3, which
was the one I was most dissatisfied
with, and made a number of little
technical changes here and there [for
the trade paperback reprinting, now
available from Kitchen Sink Press],
which nobody will probably notice ex-
cept for me and maybe Jim, but I feel
better about correcting them!”
im Vance and Dan Burr are going
ahead with plans for a sequel to
their acclaimed six-issue mini-
series Kings in Disguise, the tale of
Freddie, a young boy growing up in an
America ravaged by the Depression
and encountering hobos, labor riots
and much more. But the storyline for
the follow-up was actually devised
long ago.
“This sequel will come from one of
the first plays I wrote,” explains Vance.
“Kings in Disguise was written years
later, although chronologically, it hap-
pens before the other one.
“The second full-length play I wrote
was in 1979. It was called On
the Ropes, and it was the first thing I
wrote about Freddie. Actually, I called
him Fred there, because that was when
he was older. I had been thinking
about how he got where he was. He
obviously had been on the road, and
had all these experiences, and in 1980
or ’81, I wrote this play called Kings in
Disguise, which in Hollywood terms
was a prequel.”

Kings in Disguise epitomizes Kit-
chen Sink’s quality modern comics
line. I had never heard of James Vance
or Dan Burr before this series began.
When Kitchen Sink announced they
would be publishing a mini-series
about the adventures of a young hobo
in 1932 written by two newcomers to
the comics field, I ignored the book.
I had no idea what I was missing.
Kings in Disguise is a great graphic
novel, and one of the few current
books truly deserving of being called
a novel.

This is a novel about real life. It is
easy to imagine that these people
really lived during this time. Vance is
adept at placing period details in his
story, making the setting come alive
through his use of just the right slang
and dialogue. Artist Dan Burr is also
ideally suited to this novel. His char-
acters seem to be alive through his fine
depictions of body language and facial
gestures. Burr’s art has an earthy,
realistic style that is well-suited to this
type of novel. His art is reminiscent
of Harvey Kurtzman’s finest E.C. war
comics art. There is no higher compli-
ment I can pay him.
Kings in Disguise is a great graphic
novel, ‘Worthy of inclusion in the same
breath as Art Spiegelman’s Maus.

Clearly, Kings in Disguise stands in this tradition of
comics as literature. Comics may not really be able to do
whatever novels can, but they certainly can try. Kings tries
ecerything possible, taking its source stage play and send-
ing it on the road, passing by ewery important event Of
the Depression, like Forrest Gump without schmaltz.
well-drawn characters grow and change, and when they
find what they were looking for, the Story ends. Oddly re-
alistic and mundane dream sequences underscore Vance’s
themes. As much as I find in the book to admire, 10 years
later it seems less affecting than affected. I would like to
spend more time with the characters and less with the
literary devices they trip over.

While Burrs pencils and layout are suit-
able yet subtle, his inking styles are delight-
fully rich and varied. Most of the story is
told with a flowing, feathered brush line,
with the characters often emerging in the
night from scratchboard-like shadows on
the edges of the frames. Broad daylight
scenes feature the same rich brush strokes
against stark, bright backgrounds and small
earth shadows offering hints of depth. The
main character Freddie’s dream sequences,
except for those of the first chapter, where
one could assume Burr was feeling out his
technique, are told with a greyless outline
style that sets them apart from the rest of
the book. During the last portions of the
final chapter, Burr’s inking is utterly mas-
terful, and he deliberately punches in with
an assortment of styles for the flashback
scenes, conveying ever deeper emotion from
all the characters with visual clues. The
strength of Burr’s art comes from his avoid-
ance Of close-ups. The few
that he allows into the story
serve as emotional punctu&
tion and provide maximum
impact. Through progressive
re-readingofKingsinDisguise,
the success of Vance’s choice
of artist becomes more and
more apparent.

Yet, to my point of
view, Kings in Disguise succeeds as art
because it is a comic book. It wouldn’t work
as well as text, film or stage drama. The
seamless integration of Burr’s artwork ex-
plicitly conveys the subtle moods neces-
sary to convey the depth of the characters.
While truly great comics on this level are
indeed overwhelmed by the sheer number
of trashy titles out there (which is not to
say that one cannot harbor an appreciation
of trashy comics on their own level), the
climate whereby comics that relate and
expound on the human experience exists
in greater measure today than ever before.
And on that basis, we can expect to see new
generations of creators willing to use the
medium as a means of serious selßexpres-
sion. When that time comes, comics like
Kings in Disguise will still be exceptional,
but not the exception.

Such a book, published by Kitchen
Sink in a series of six comics, is James
Vance and Dan Burr’s Kings in
Disguise. It flies in the face Of
simplistic entertainment, although it
is interestingly executed and poses
simple questions that are, indeed, the
hardest. It is a book that is the very
converse of escapism: it is an unplea-
sant challenge to hedonism in comics,
a confrontation of the hard lineaments
of what one’s life means, what mat-
ters, what others mean to oneself. It
is classic drama, the construction of
epiphanies in which the whole signi-
ficance of life is concentrated in one
acute moment — the evocation of
resources that the commonplace con-
ditions of life only hide from us.
Vance’s story captures classical
ethical issues, embedded as they
always are in the particulars of life, in
the matrix of desperate needs, acrid
uncertainties, seething injustices. See? It was a kinda big deal back then. But is it still?

W W Norton has reprinted it:

It is so sad the pair produced so little work together, as art and writing enhance each other here in a way few comics achieve to produce a moving story that can stand up against any classic coming of age novel.

I can’t really find much chatter about the book, though, so my feeling is that it’s been mostly forgotten.

This is more of a 3.5 for me but I feel bad beating up on a book that’s made professionally and sides with the angels. It’s a rambling, disjointed account of a young boy’s experiences as a hobo during the Great Depression—a story that ends up both fascinating and a bit paint-by-numbers.

Anyway, I’m an asshole for not absolutely loving this, I get it.

This is the ninety-eighth post in the Entire Kitchen Sink blog series.