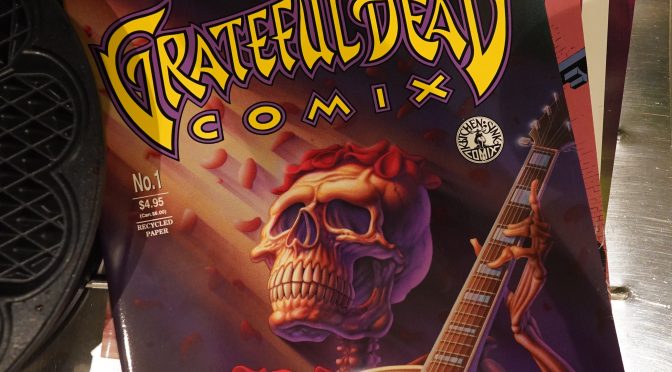 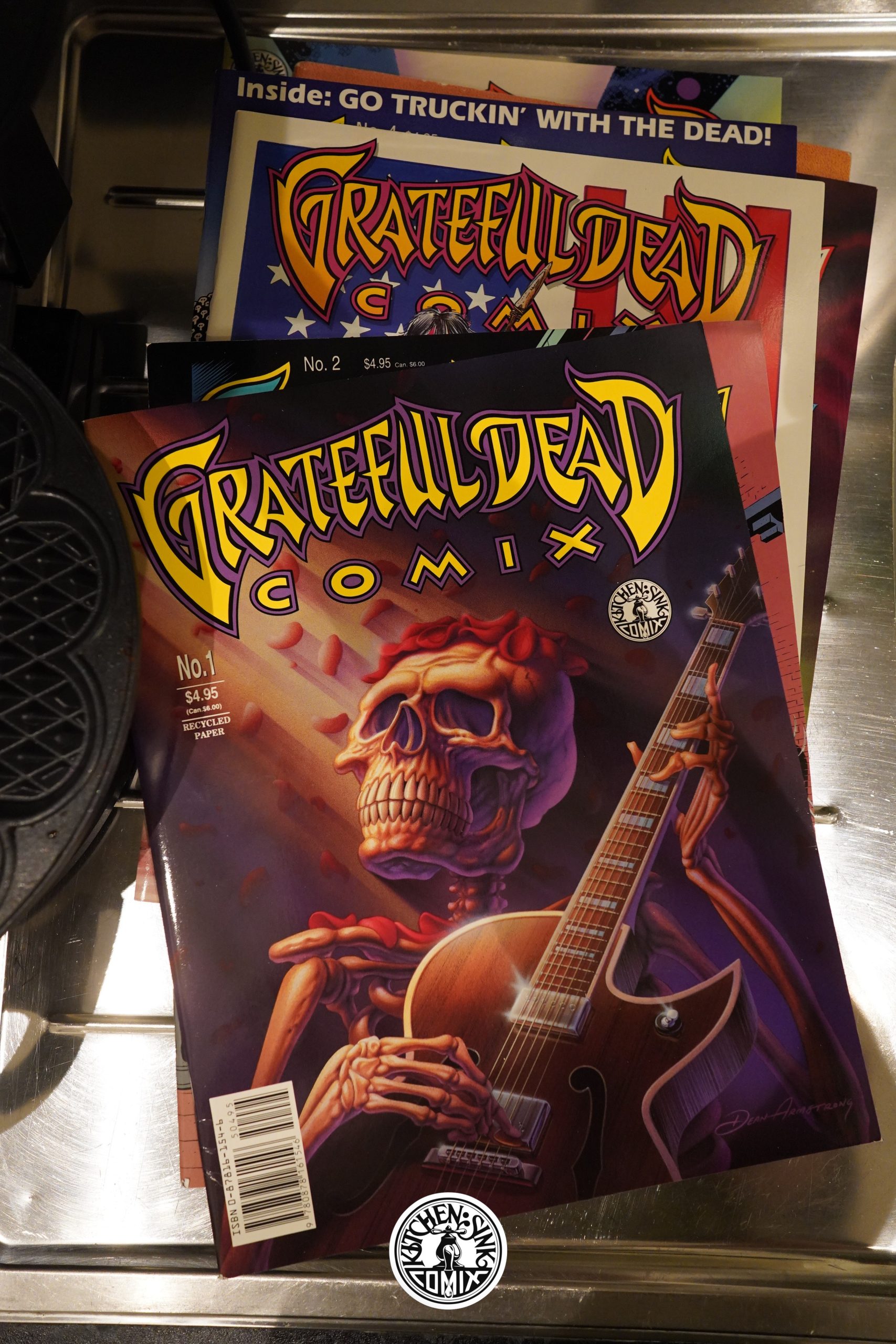 Welcome back to this blog after an unexpected half-year hiatus.

Let’s see whether I remembered how I used to do this… I’ve got a new lens for the camera, so hopefullythis will be less out of focus now. 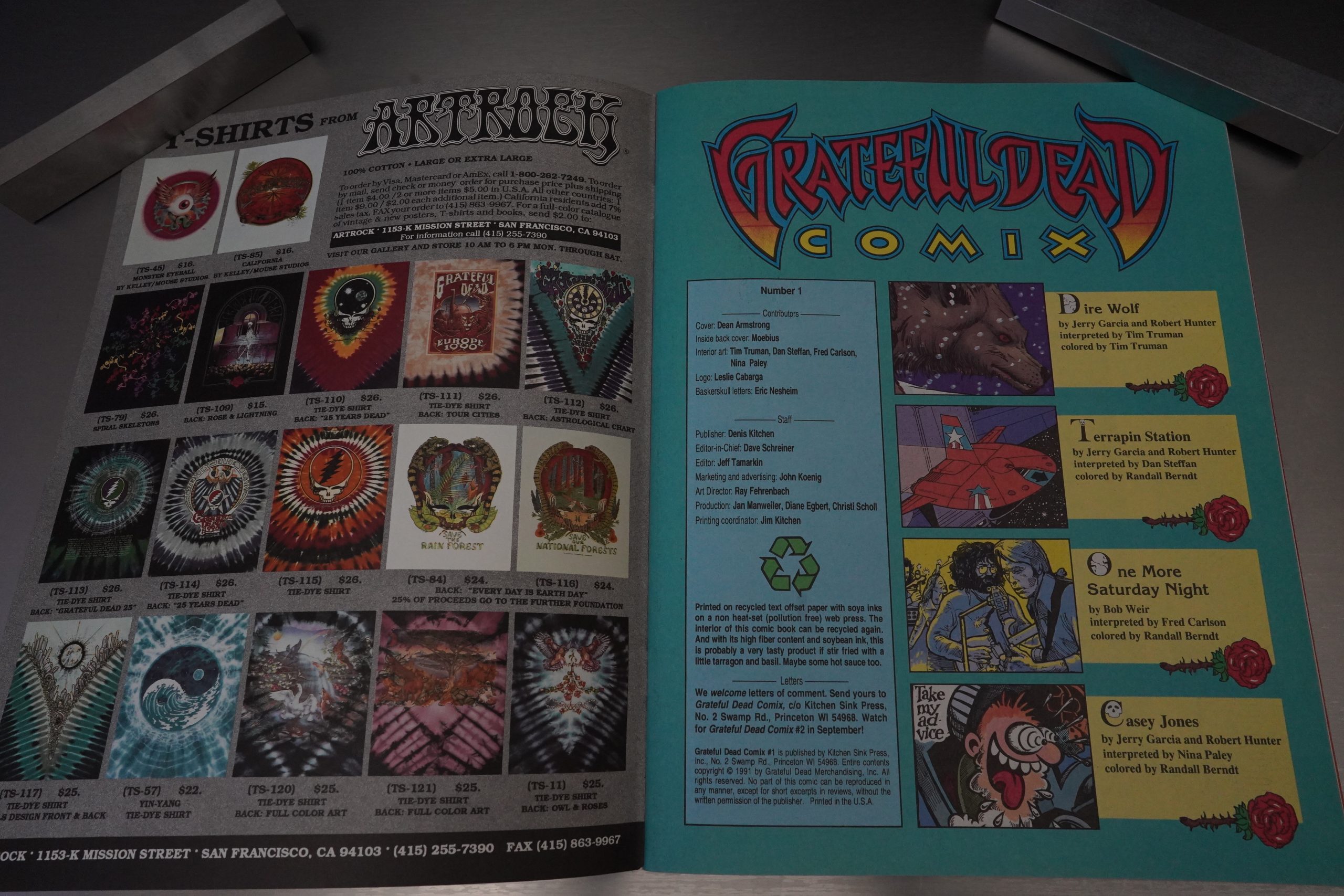 Uhm, a bit on the dark side… I should have more light when snapping pics. Oh, well, I’ll fix that for the next post.

Anyway, this is a 40 page magazine sized book with cardboard covers. And it’d printed on recycled paper, with soy inks, by a non-polluting printer, apparently. Right on! (It may even be edible.) (For $5, which doesn’t seem to be unreasonable if it also gets you a salad.) 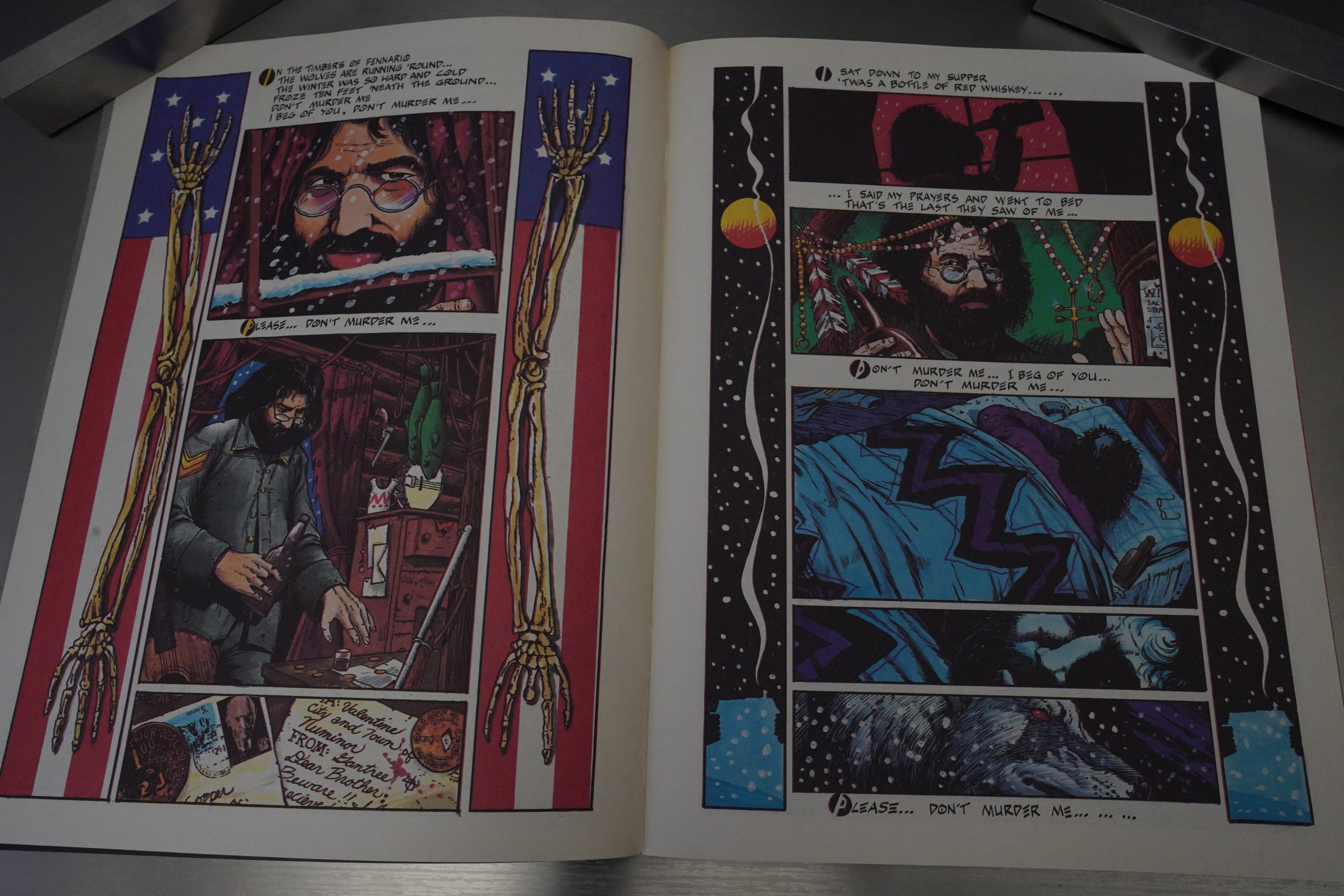 But what is this? Yes, indeed — it’s a collection of illustrated lyrics. So we’re talking about a publication that’s for the most hard-core of hard-core Grateful Dead fans. Of which I’m not — I’ve barely heard any of their songs. I think the music they’re playing is something called “rock”? I don’t know from that.

Tim Truman is in every issue of this series, and I’m not surprised that he’s a fan, and the grizzled artwork works well here. 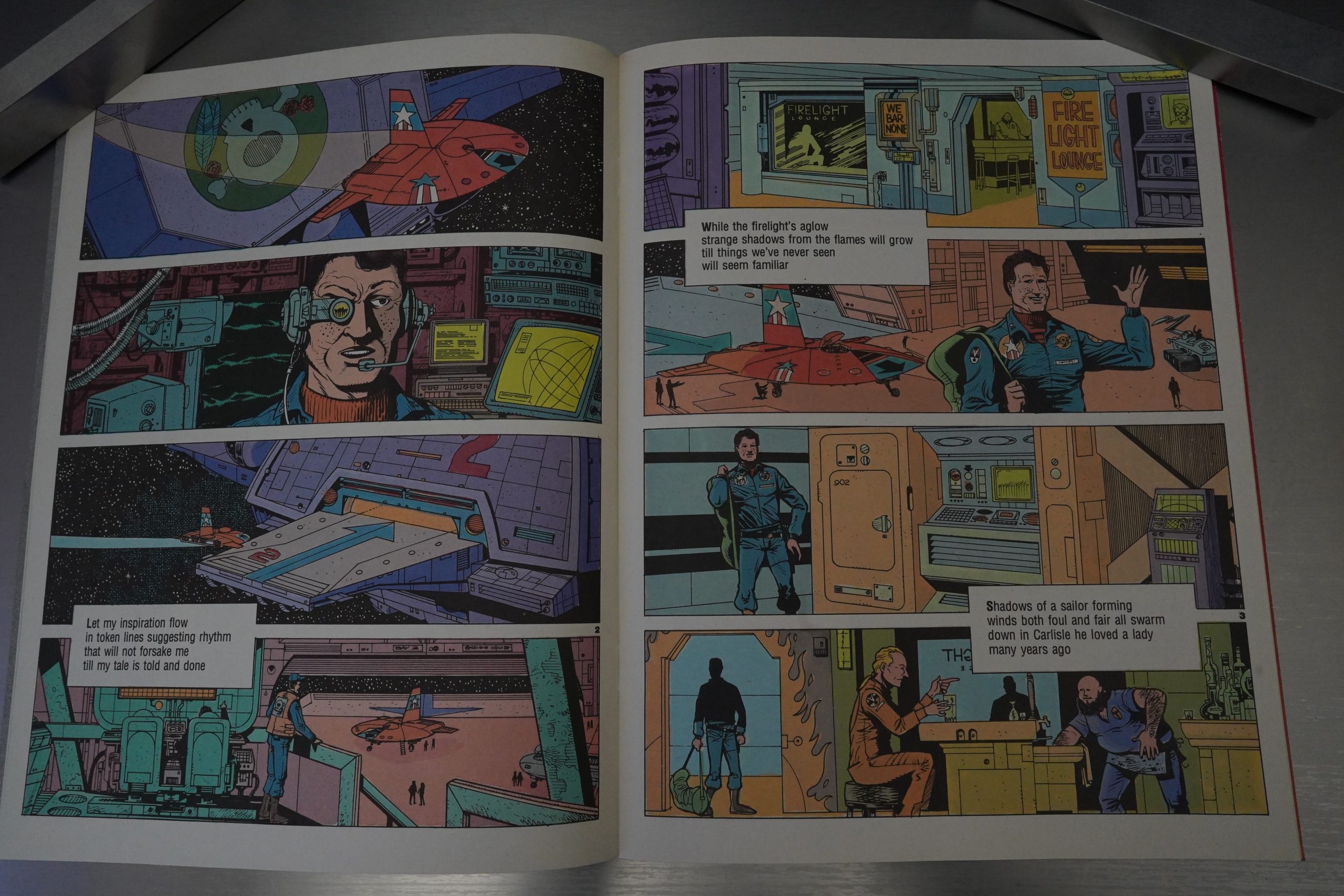 Dan Steffan takes on Terrapin Station with a totally different, sci fi approach. And it’s bizarrely spread over two issues — there’s four more pages in the next issue, for some reason. 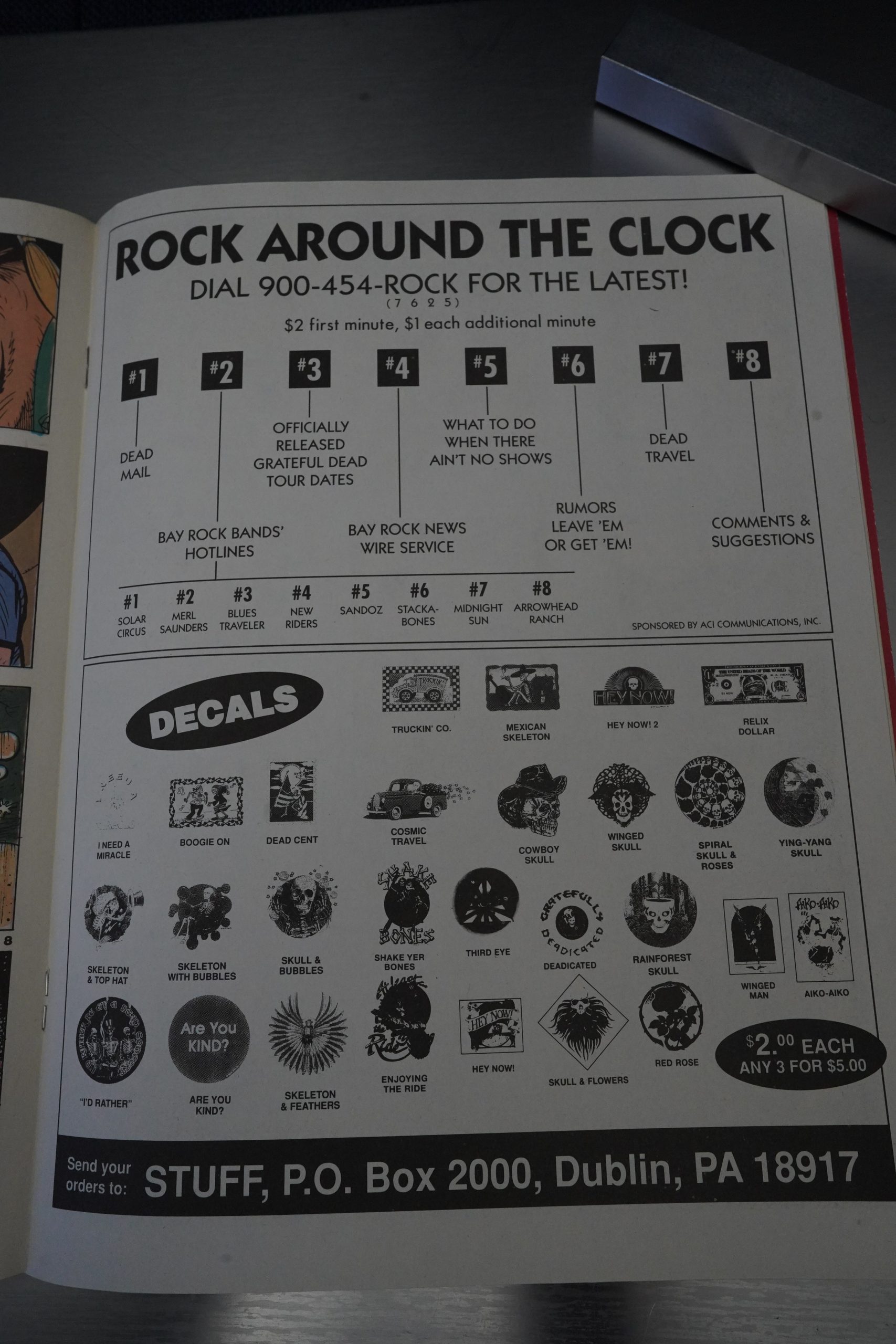 There’s a lot of ads in these books, for various related Grateful Dead merchandise. About ten pages per issue? Which seems a bit odd, since these books otherwise seem kinda high class. On the other hand, doing merch seems to be part and parcel of the Grateful Dead experience, so… 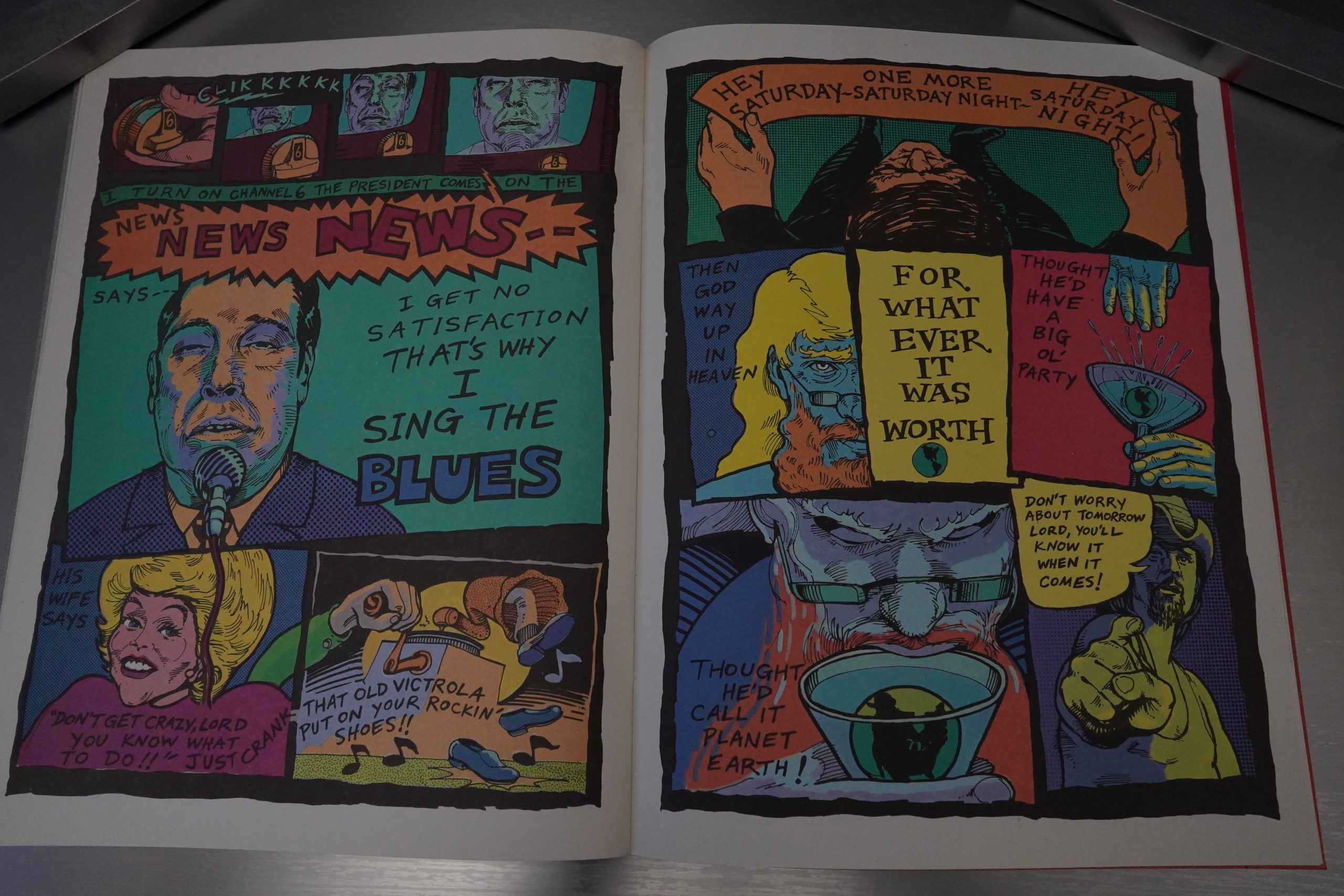 You can’t say that they go for a unified art style. (Fred Carlson.) 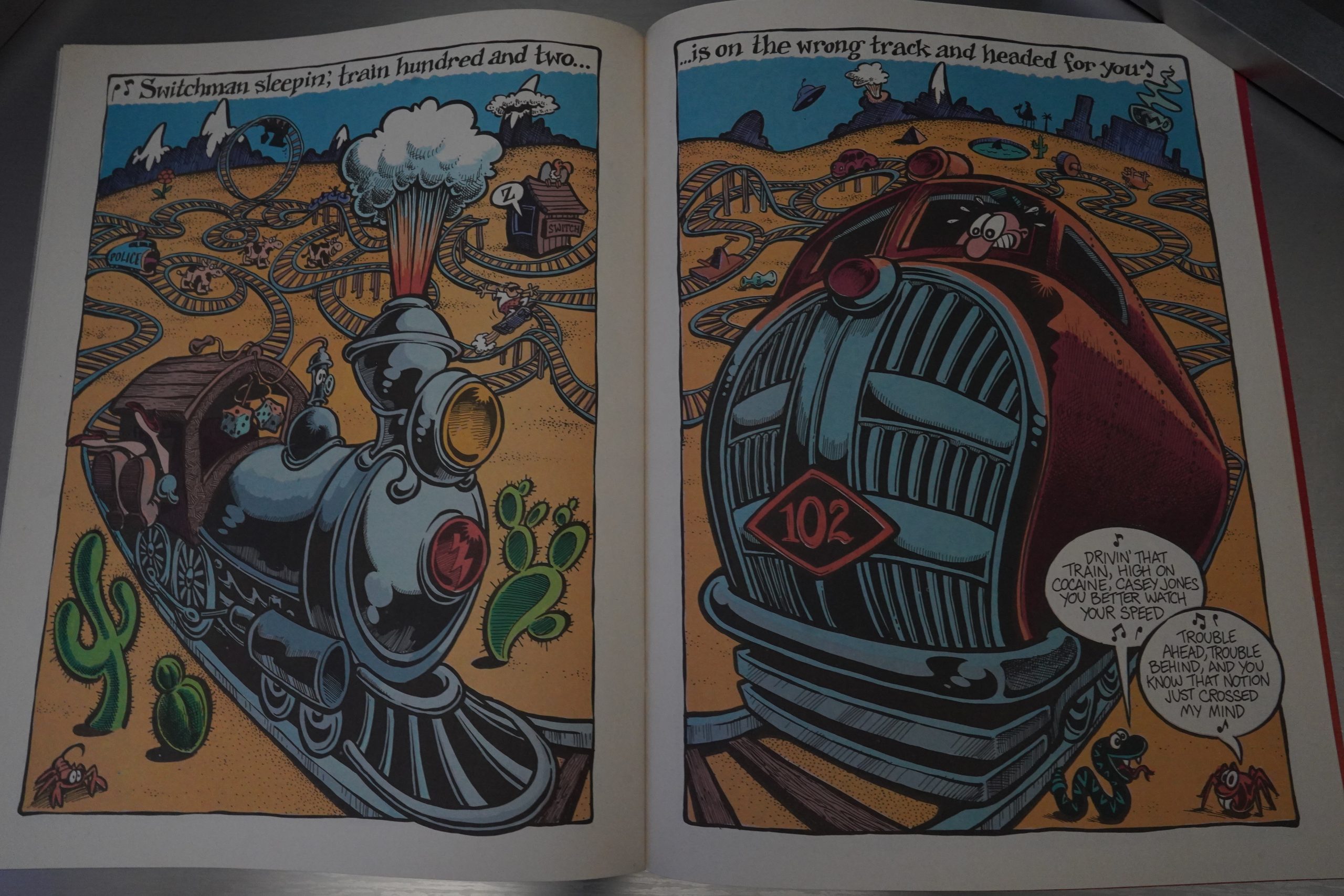 But they’re all quite straightforward in their approach to adaptation: They basically illustrate, panel by panel, what the lyrics say. I expected a more diverse range of approaches — for instance, telling an opposing story, or doing… something. But I guess I’m totally outside the intended audience for this, so what do I know. 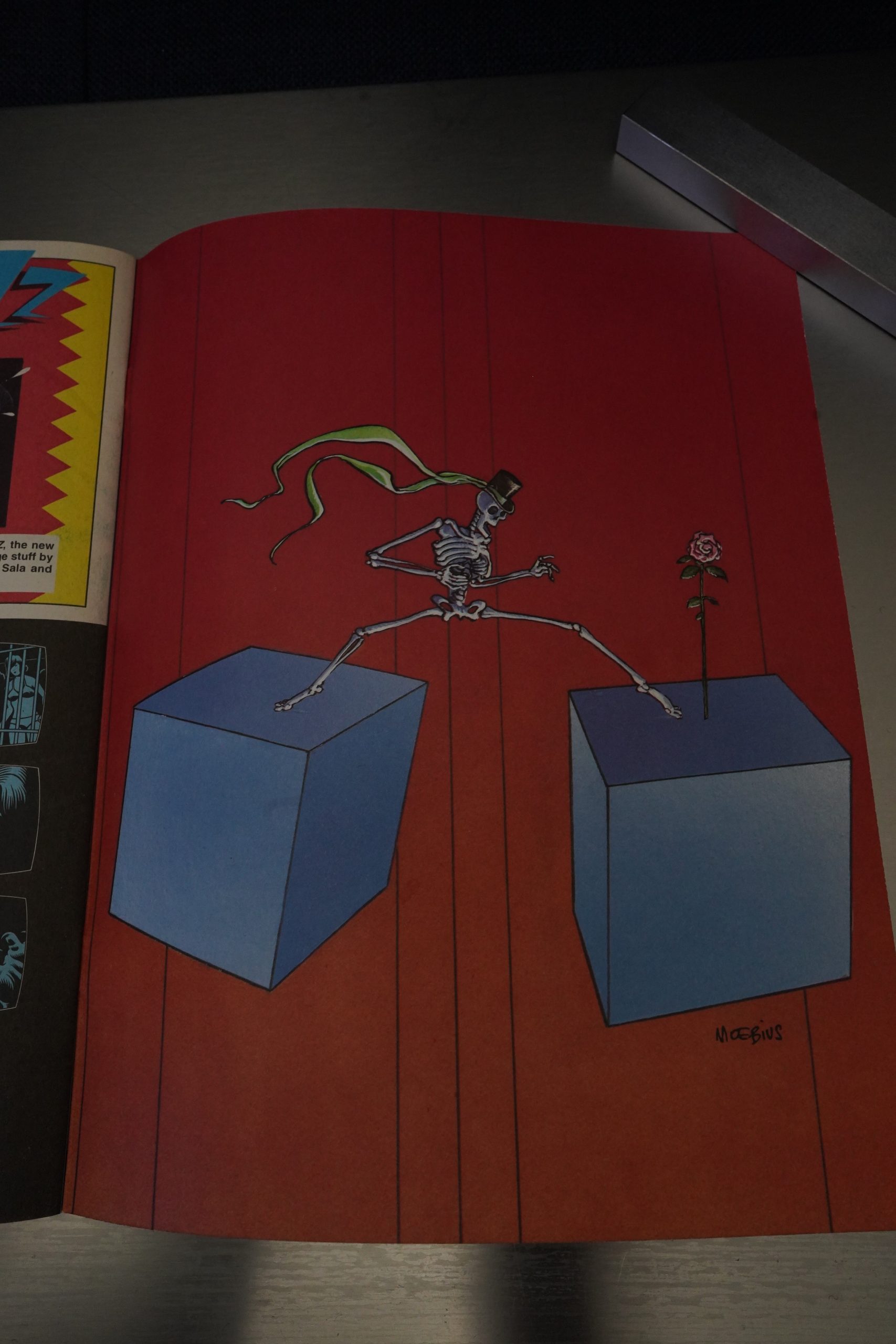 And Moebius shows up for a page. 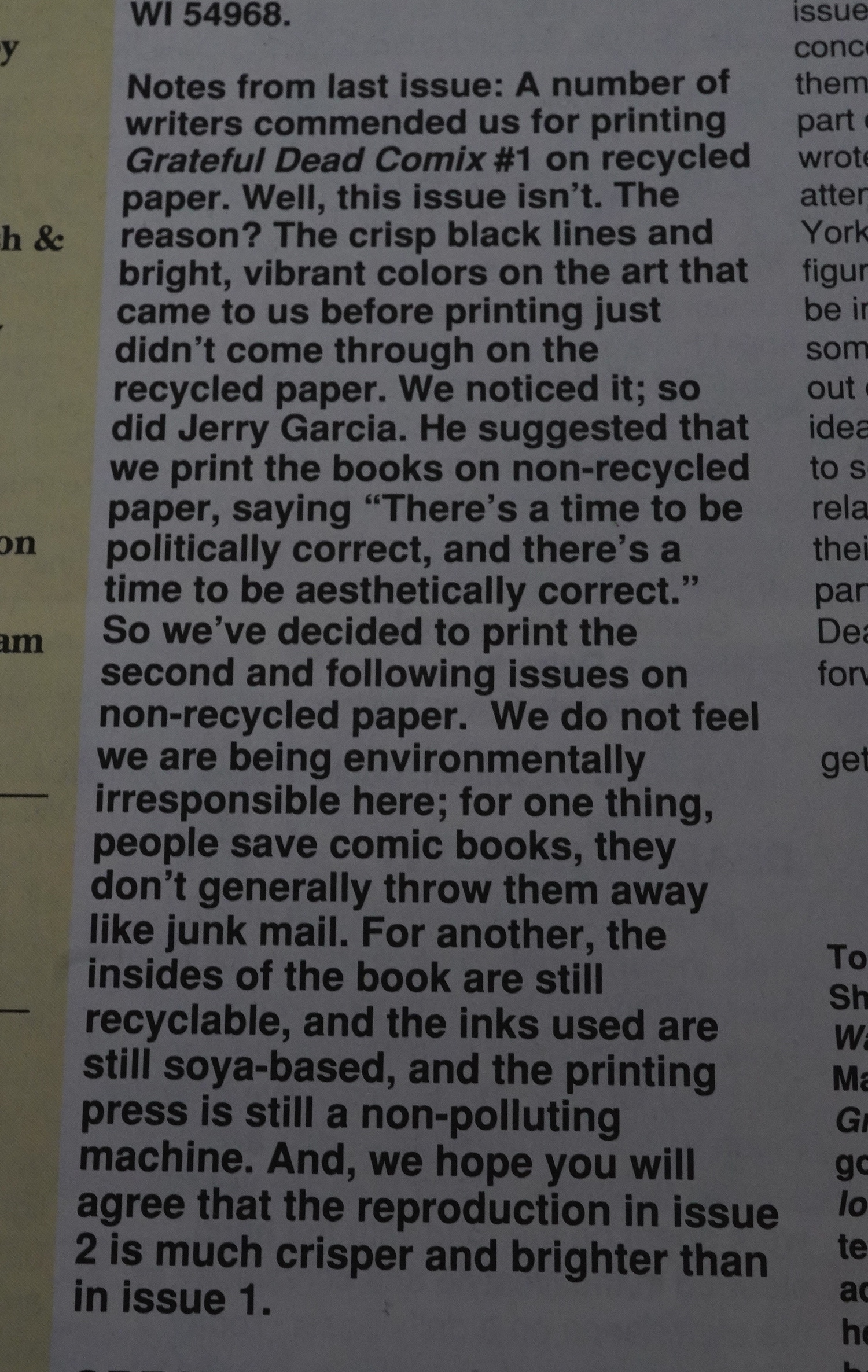 Only the first issue was printed on recycled paper, because that stuff sucks. (I’m rephrasing slightly.) Right on? 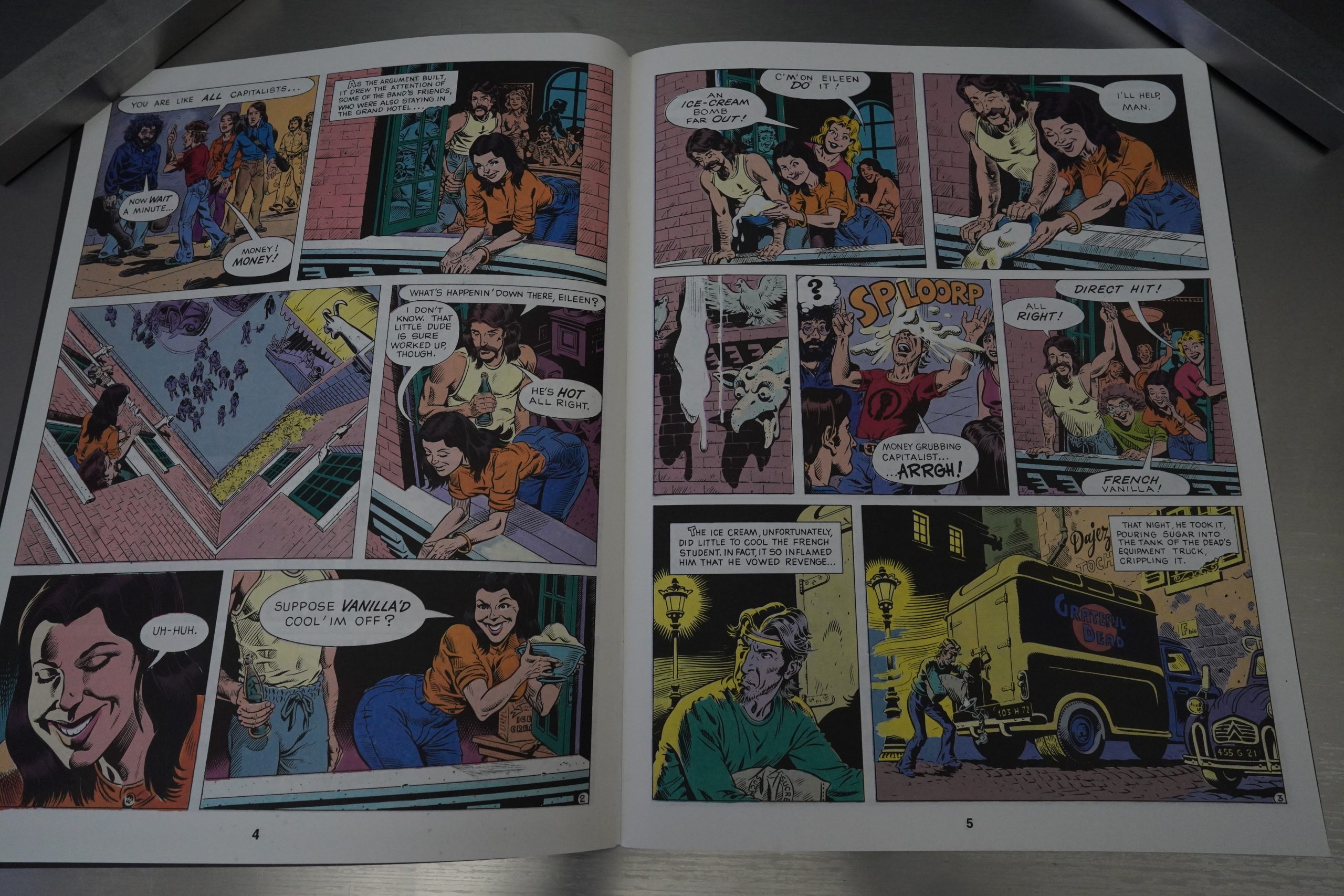 Rand Holmes does an anecdote from the band’s history, and this is kinda more what I imagined that this series was gonna be like. But it’s so slight an anecdote that even Holmes’ artwork doesn’t really help much. 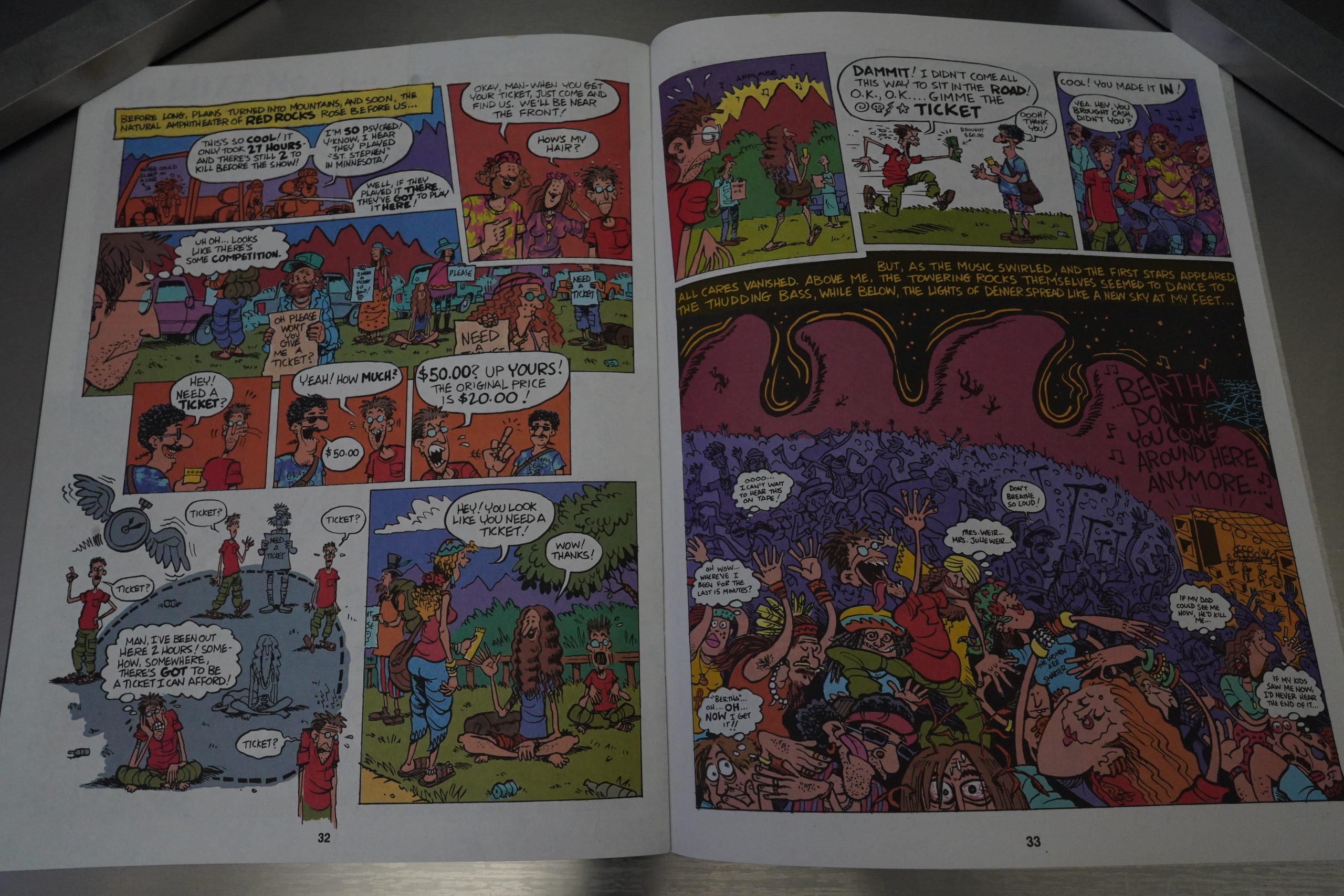 Finally! Some good comics! Terry LaBan (who’s been to over 200 Grateful Dead shows) does a story about going to one of their shows. And it’s fun. He does a handful of these bits over the length of the series, and they are (for me) the best bits of the series. 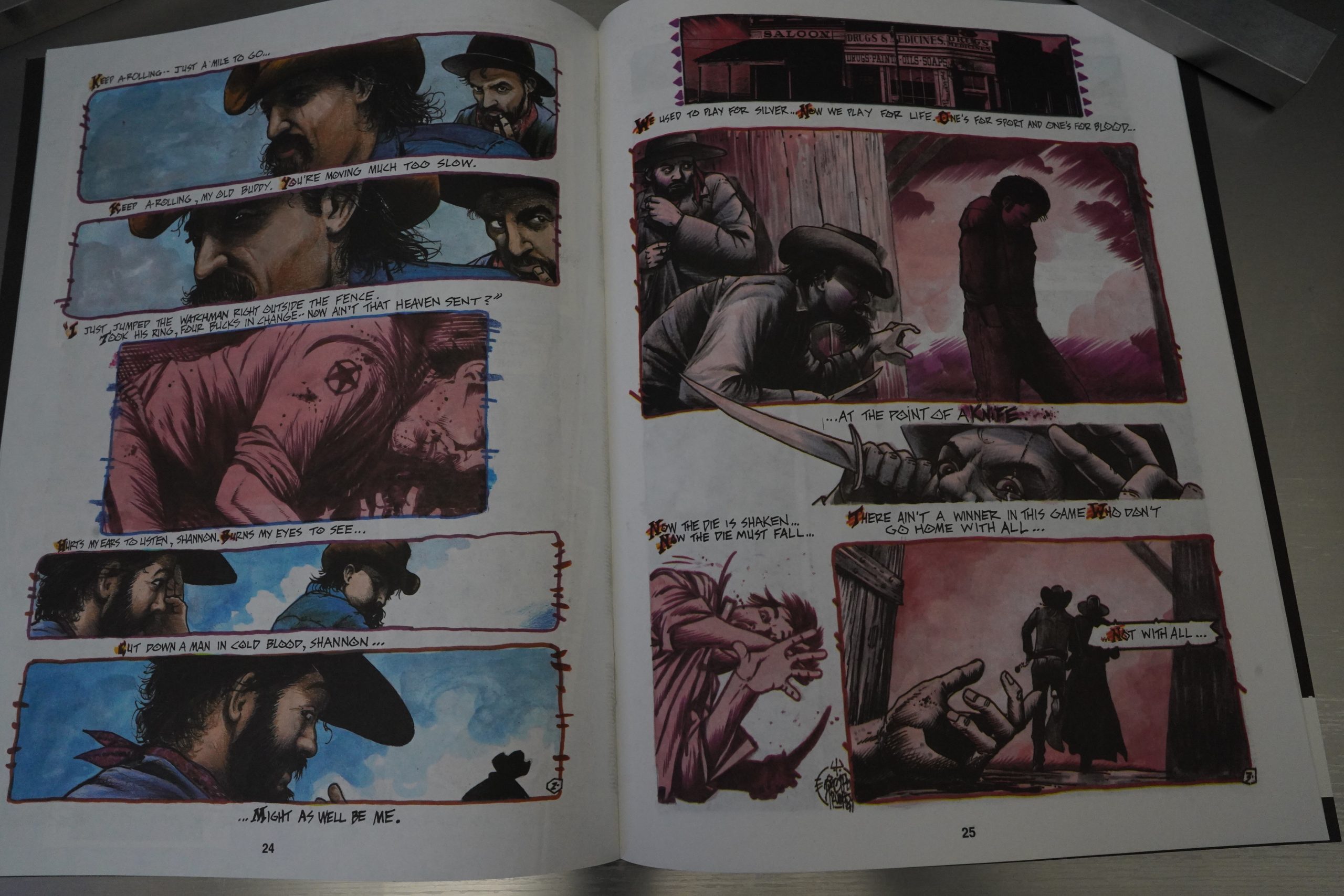 Tim Truman, like I said, is in every issue, and he does vary his choices quite a bit. All the stories are somewhat Western-inspired, but they look nice. But what’s up with the colouring here? Kinda unusual… but looks nice and organic. Mary Fleener! Well, I guess I should have expected that, her being all psychedelic and stuff.

Oops. Out of focus! Need more light… Darn. Anyway, this was originally planned to be a four issue series, but sales were apparently unexpectedly good, so the series continues. 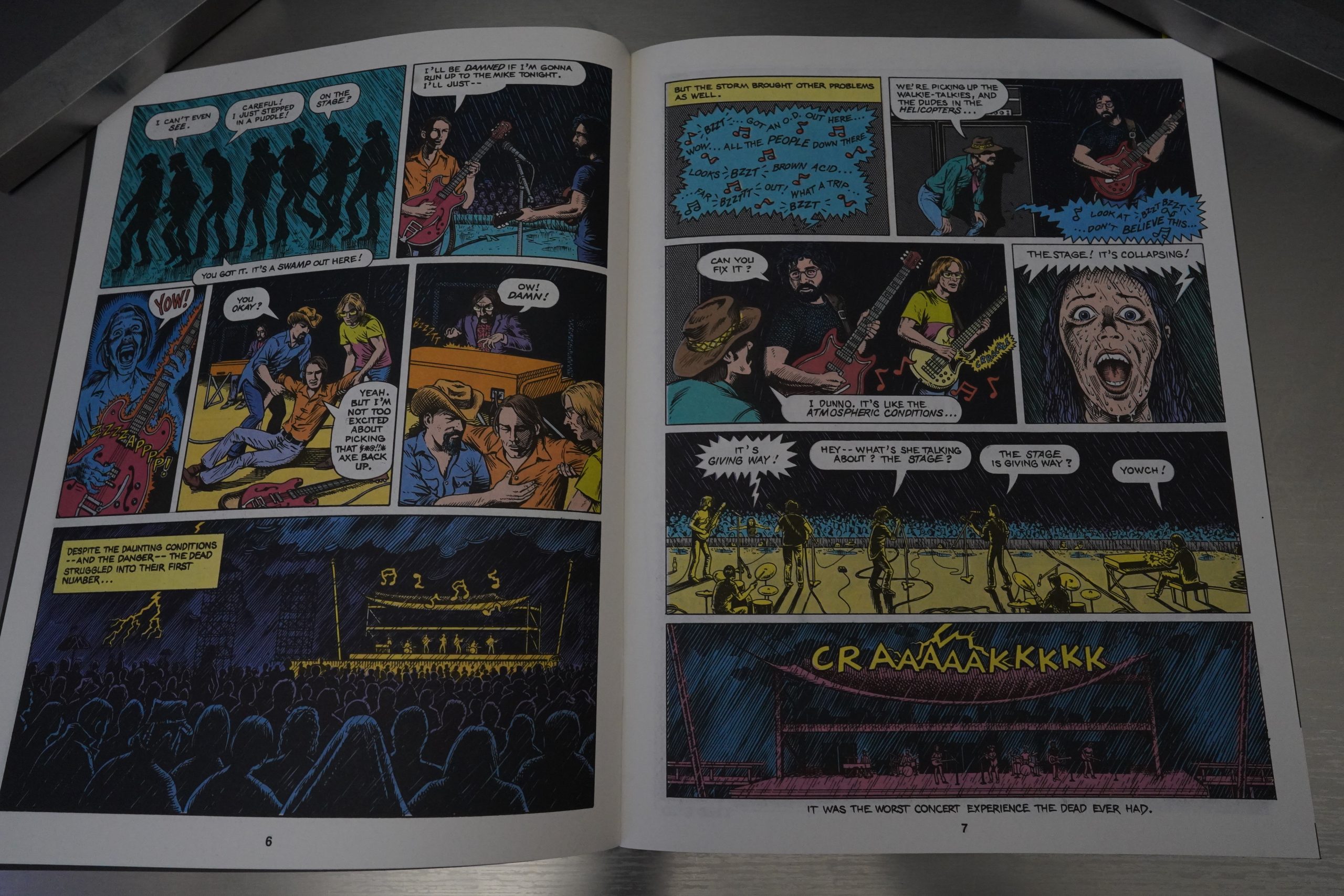 John Wooley/Dan Burr does a couple of stories of Grateful Dead anecdotes, and… They’re OK? But not really thrilling. 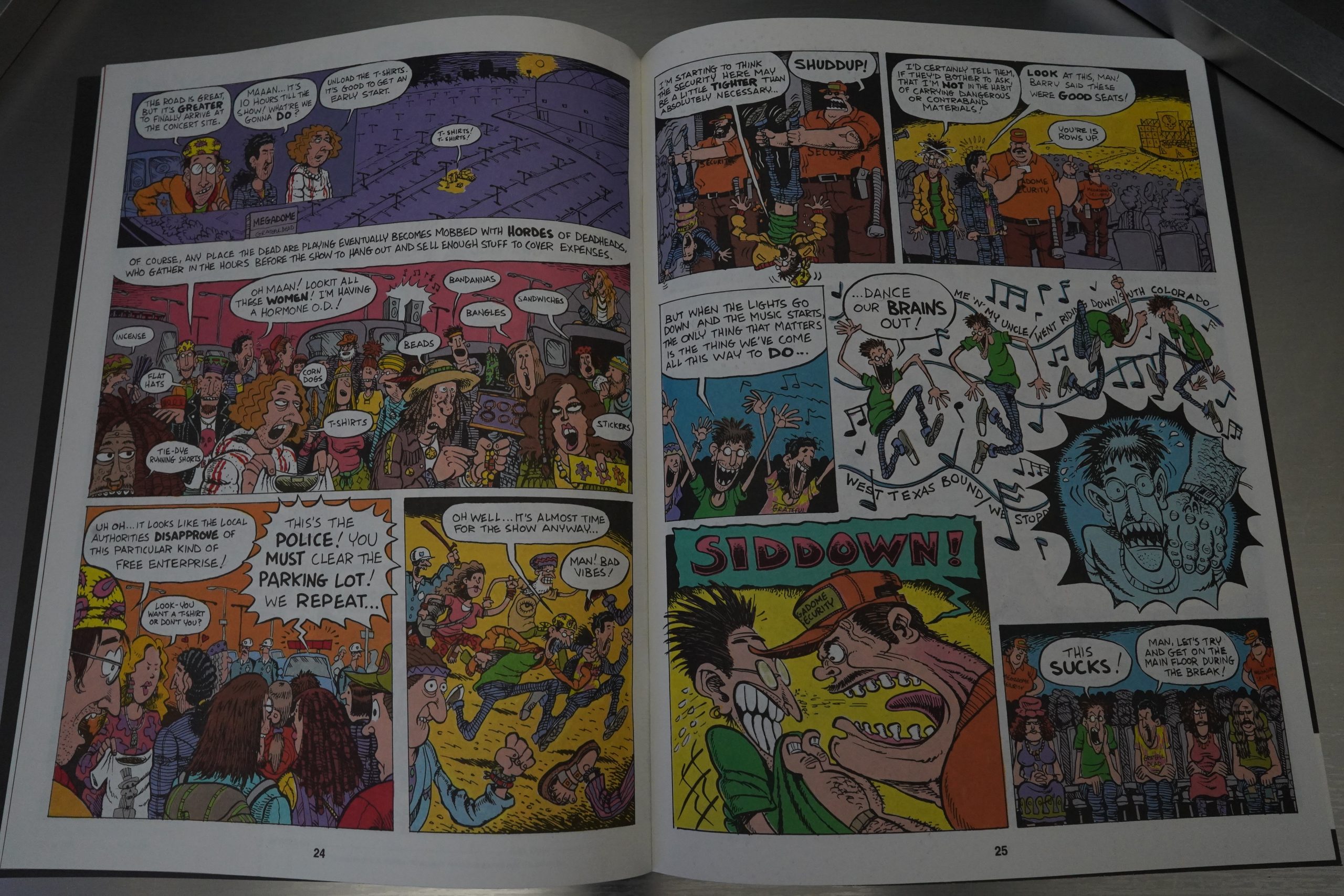 LaBan’s stories are a lot of fun — look at those dance moves. Just look at them! As with most any anthology, people get tired of doing short pieces, so they start a four part serial where Tim Truman adapts a mooted Grateful Dead opera. It’s still basically the same stuff, though, so it’s neither better nor worse than what’s gone before. It’s just… more. 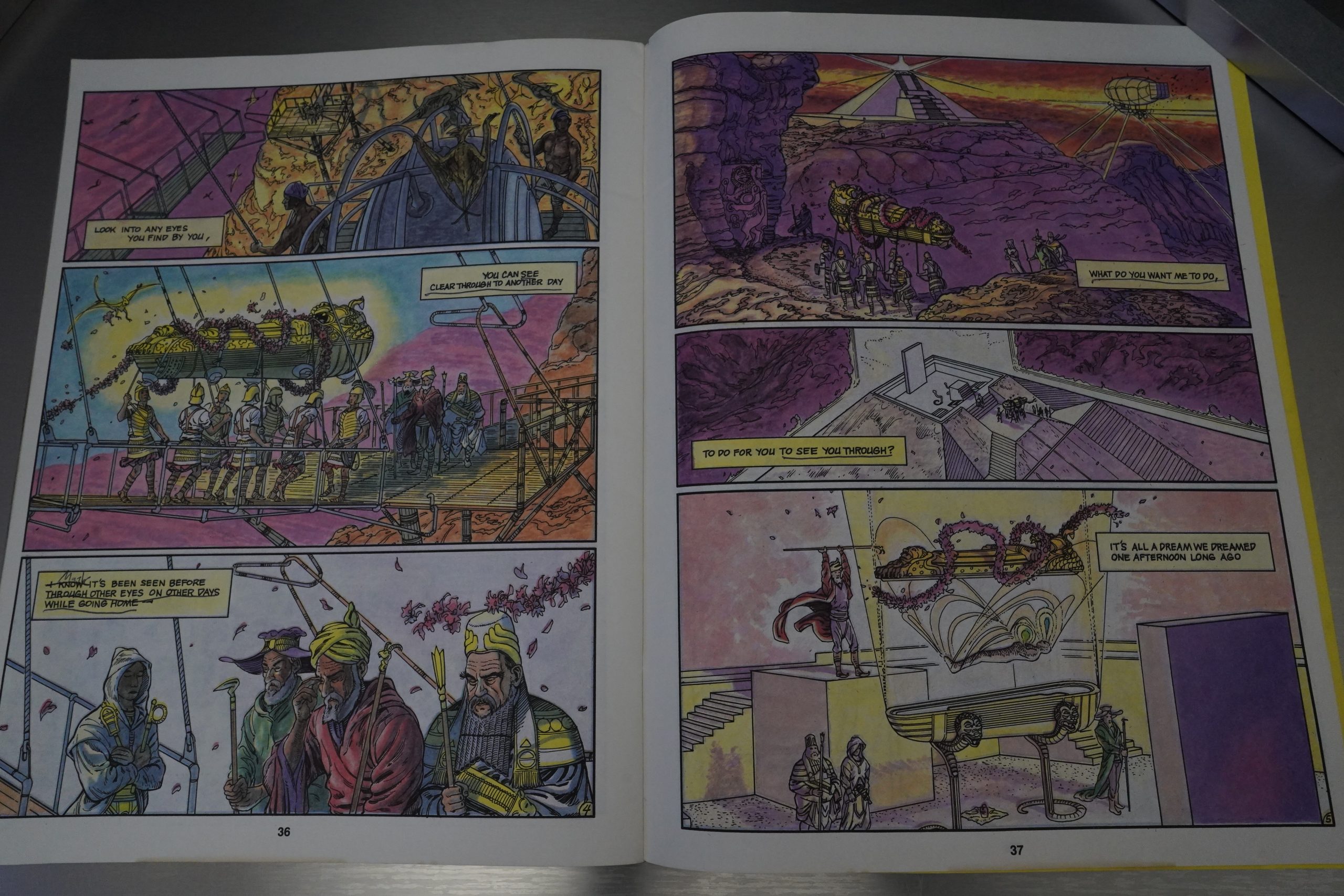 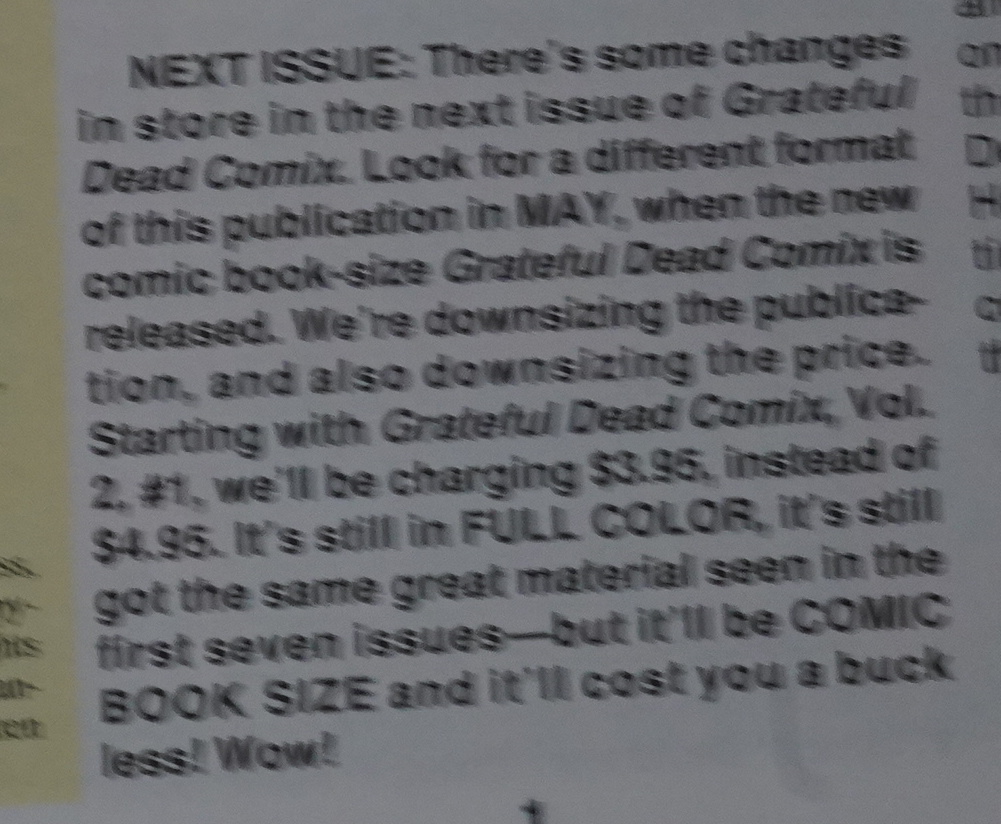 Anyway, after issue 7, they drop the 40 page magazine, and start a 32 page standard comics version. Presumably the sales had been dropping, and they’re trying to see whether a format change will help? 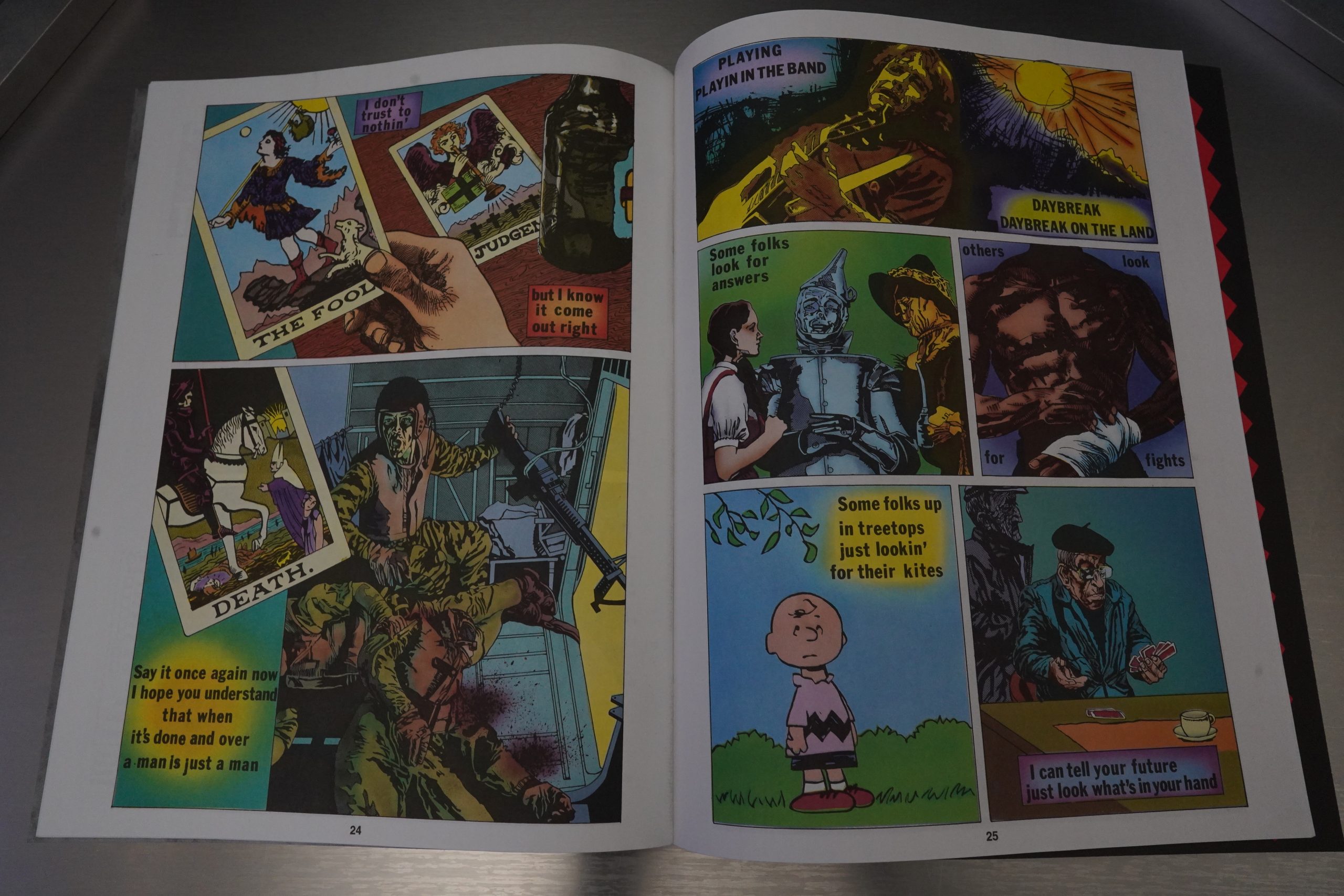 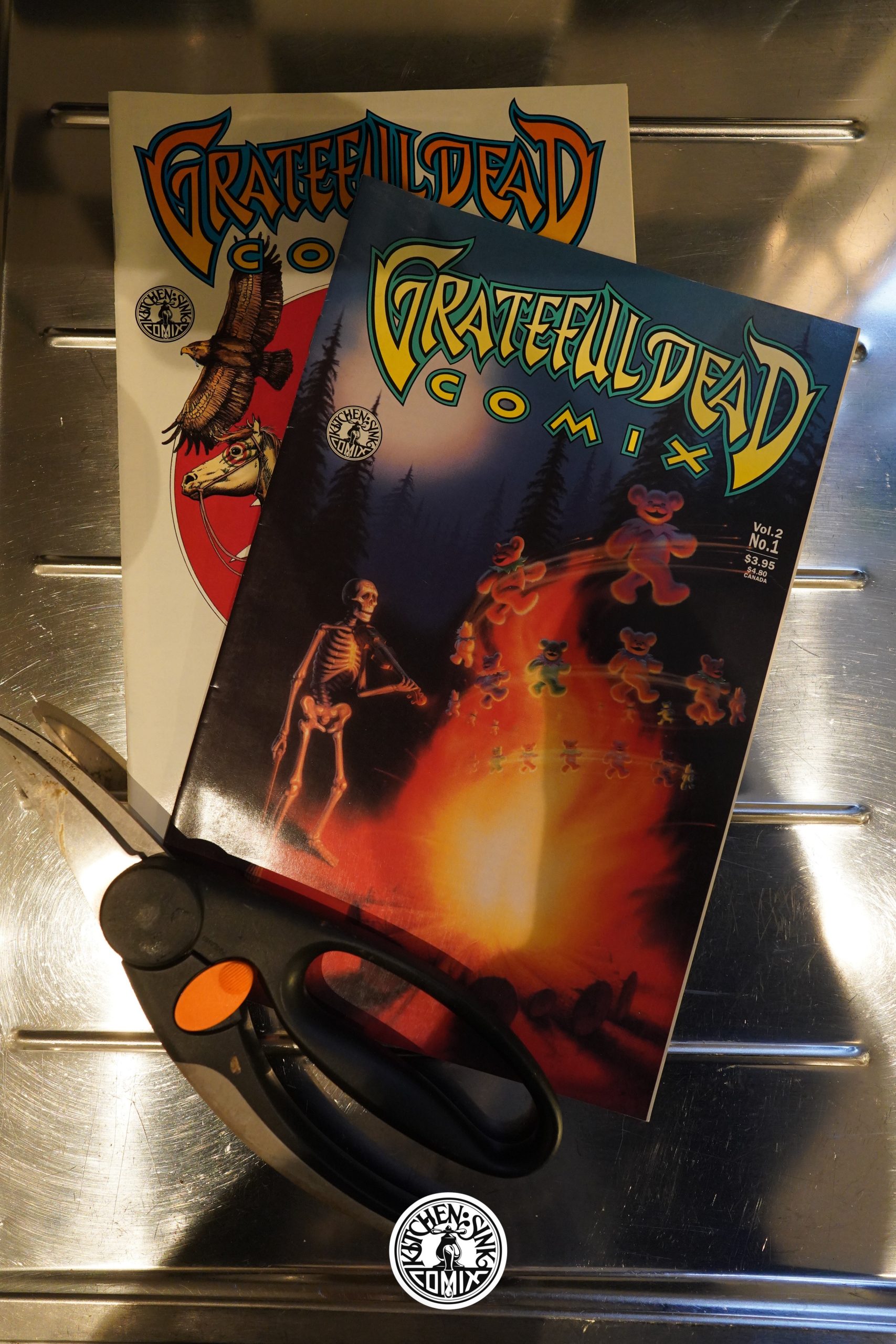 So we come to the final two issues, in a smaller format. 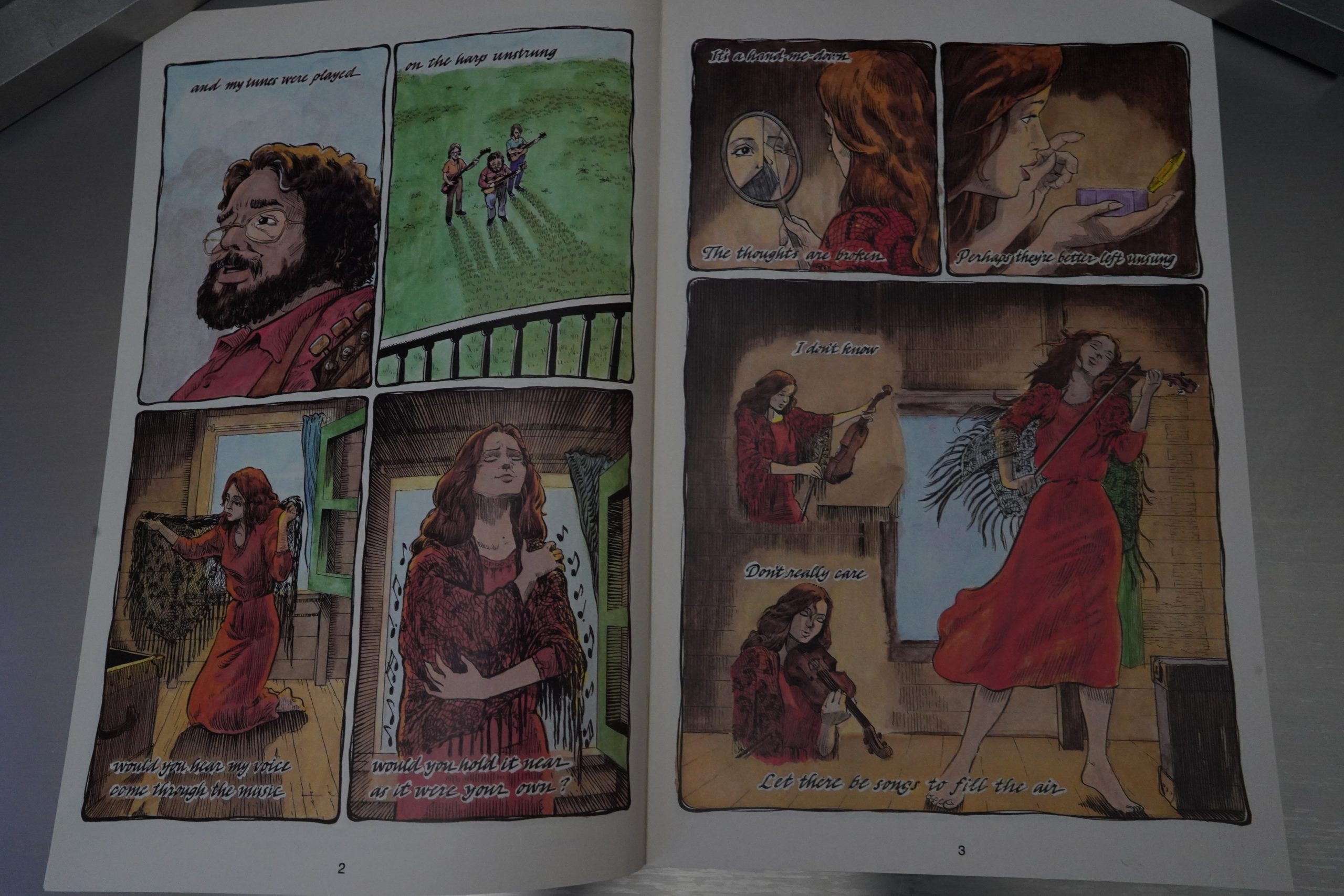 It’s printed on glossy paper, too. And… Reed Waller can draw people, too!? Not just anthropomorphics? Huh! Paul Ollswang. I wouldn’t have guessed it’s him, but it’s really cool. 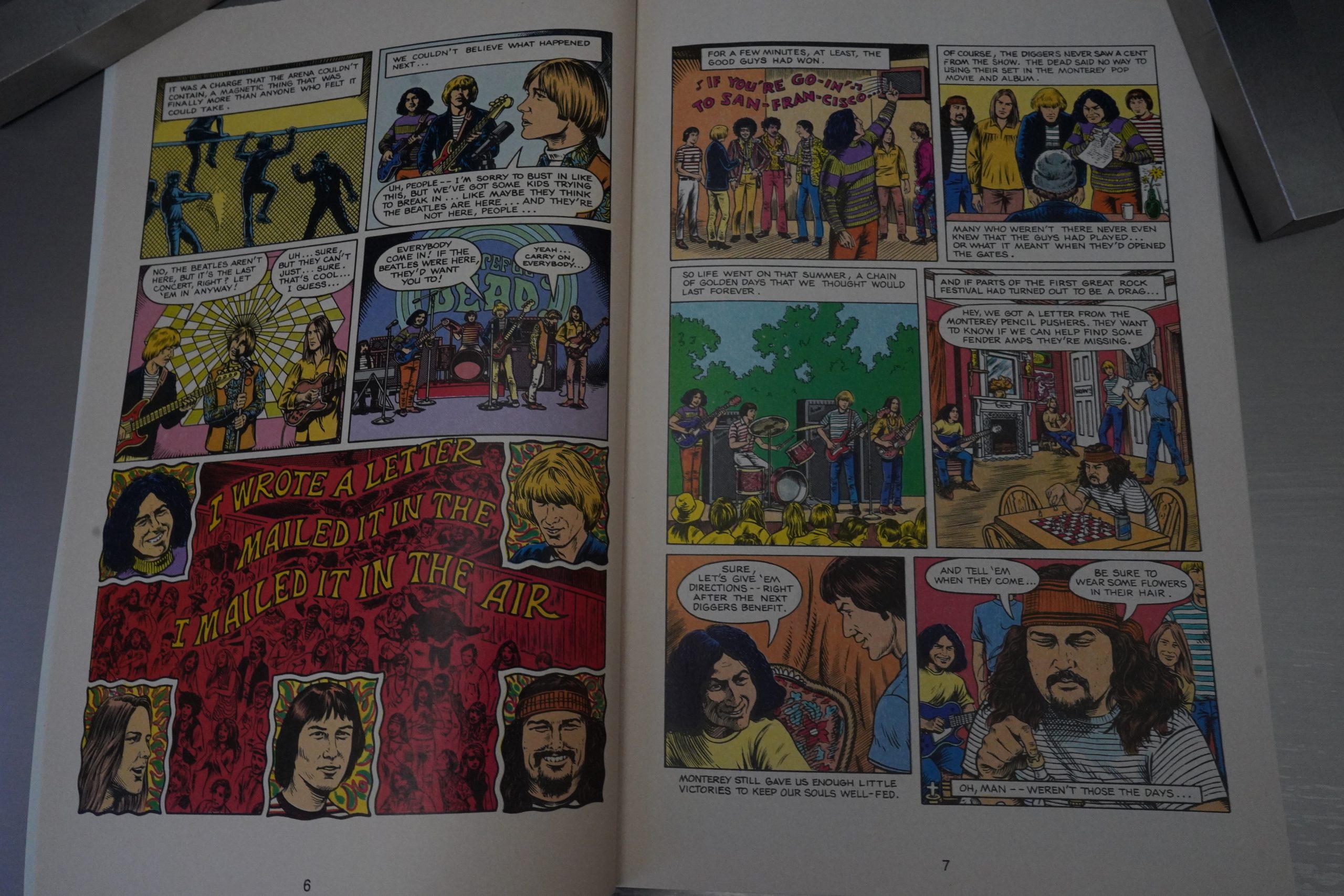 The final Wooley/Burr anecdote is the most substantial one. 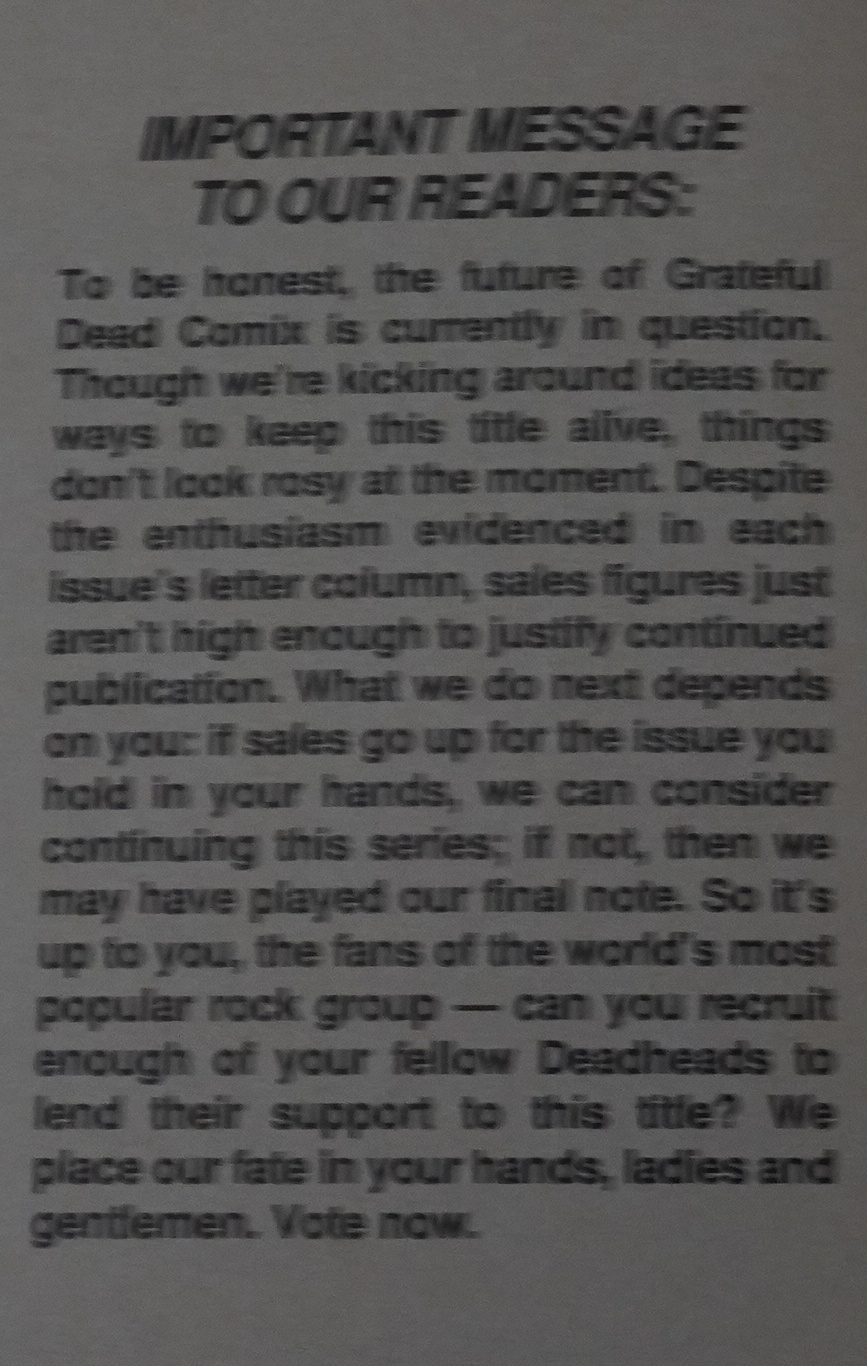 OK, when I’m taking close-ups I have my camera too close, I think?

Anyway, they announce that this is possibly the end of the series, and it is.

This series was somewhat controversial internally in Kitchen Sink: Grateful Dead, as part of the licensing agreement, demanded that they own the resulting comics fully. This means that the comics had to be done on a work-for-hire basis, which Kitchen hadn’t done before: All the comics they’ve published have been creator owned. (Except some of the reprints.) In addition, Grateful Dead demanded full approval rights to everything, which was also a hard pill to swallow.

Another Band May
Sue Revolutionary
Revolutionary Comics’ Rock n ‘ Roll Comics is
being threatened by another band that doesn’t
want an unauthorized comic book to bear its
name. The Grateful Dead, like New Kids on the
Block before them, are claiming that three soli-
cited issues of RRC about them constitute a
trademark violation. Both the Dead and the New
Kids have their own licensed comics: both have
the same merchandising agent, MCA/Winter-
land Productions.
As of Feb. 6, the Grateful Dead Merchan-
dising Corp’s attorney, Joseph A. Yanni, has not
yet sued Revolutionary. He has written a “cease
and desist” letter demanding that Revolutionary
publisher Todd Loren not distribute the issues.
Loren says he will proceed with the comics. “Of
course, if they do take legal action,” Loren says,
“we will fight them, as the industry sits back
and jeers us as they have in the past.”
During the New Kids case (which ended in
a letter of judgment banning Loren from reprint-
ing the New Kids issue of RRO, Loren applied
for legal and financial assistance from the Comic
Book Legal Defense Fund. He was turned do’,vn,
on the grounds that he was fighting a trademark
case, not a First Amendment case. The fund’s
administrator, Kitchen Sink publisher Denis
Kitchen, is also publishing the authorized Grate-
ful Dead Comix. Kitchen says that if Loren
Kitchen Sink’s authorized Grateful Dead Comix.
makes a new request to the fund, he will refer
the decision to the fund’s board of directors.
While the decision to take any legal action
against Loren would be made by the band’s rep-
resentatives, Kitchen does have a few words
about the dispute: “We’ve gotten a lot of good
publicity and reviews for our Grateful Dead
Comix. The argument is going to come down
to confusion in the marketplace.. .We’re not say-
ing he can’t do unauthorized biographical com-
ics; he just can’t do it with the band’s name so
dominant on the cover that it’s creating confu-
Sion with our series.”

Right on? And… it’s a small comic book world: Loren wanted help from the CBLDF with doing a Grateful Dead book, but CBLDF is run by Kitchen, so…

Grateful Dead Comix #1-4
KITCHEN SINK
It goes without saying that anything to do with
the Grateful Dead is for the faithful only, and
for that hardy fraternity buying Grateful Dead
Comix should make just as much sense as hoard-
ing hundreds of hours of concert tapes. It’s a
slick color production, all quite snazzy except
tor the socially responsible but still slightly
cruddy recycled paper (abandoned after #1).
Most of it is given over to rock video-style in-
terpretations of song lyrics, often featuring band
members as characters. For what it’s worth, let
history record that the foremost interpreter of
Grateful Dead lyrics is Tim Truman. Truman
perfectly captures Robert Hunter’s smoky, sepia-
tone Haight-Ashbury version of the old west,
and reveals a grittiness that you might not have
known was there. Truman aside. the best inter-
.pretations are the ones that take the most liber-
ties. particularly Frank Gresham’s berserk take
on “Friend of the Devil,” which is reminiscent
of the poetry “interpretations” in the old MAD
comics. and Mary Fleener on “St. Stephen.”
Fleener has a knack for capturing rhythms on
paper, and while you usually have to supply the
soundtrack in your head. she is the only one pre-
sent who seems to have incorporated it into the
strip. breaking away from all psychedelic cli-
Ches. Unfortunately, for every highlight there’S
a pedestrian performance, usually by someone
trying to recapture underground comics styles
with neither the energy nor the originality. The
song interpretations are sometimes (though not
often enough) leavened by tour and concert an-
ecdotes. Here, again, the one good/one bad pat-
tern holds; Rand Holmes’ “Lille Story” doesn’t
have much of a point. but Terry LaBan’s “Red
Rocks •82” is one of the best things in the series.
The opening line encapsulates the secret shame
of this band’s followers: “To be honest, I don’t
really think of myself as a ‘Deadhead,’ and it’s
hard for me to believe I’ve seen them 200 times.”
Sounds like something you’d hear at an AA
meeting. doesn’t it? But there he is, riding hun-
dreds of miles, sleeping in the rain, and trading
his friend’s spare tire for tickets. It’s the sense
of humor that both the band and the fans have
about themselves that keeps Grateful Dead
dising and idolatry. though if you’re really look-
ing for a cartoon equivalent Of the Dead
ambience, you’d be much off with any Old
Freak Brothers comic, which Kitchen will also
be happy to sell to you

Kind of hard to imagine that this
official (01991 Grateful Dead
Merchandising, inc.), deluxe (five
bucks, in full color, and on recycled
paper) comic book is based on one of
the most laid back, unostentatious
bands ever to hit the big time. But hey,
this is the ’90s, right?
It’s also almost clean enough to get
a “G” rating, which surprised me.
That the book seems no less entertain-
ing for this surprised me even more.
With a package like this I wanted
to see some pretty exceptional mater-
ial. I got it half the time.
This book, which adapts four
popular Dead tunes, has been a
surprise direct market hit for Kitchen
Sink, due in no small part its star
artist, Tim Truman. Truman, inter-
preting “Dire Wolf,” gets to combine
three of his favorite subjects: The
Dead, the frontier, and ornately
dressed psychopaths. It’s a typically
strong job from the artist, whose art,
as always, manages to look incredibly
gritty and unbelievably slick at the
same time.
At the opposite end of the spectrum,
but equally good, is Nina Paley’s
manic treatment of “Casey Jones.”
Paley is one of the foremost praction-
ers of the rubbery, underground
cartoon style that’s so associated with
the Dead and acid rock, and it’s a
wonder that she’s not better known.
She presents a funny, warped version
of the legendary locomotive engineer,
as viewed through a wide angle lense.
Fred Carlson’s “One More Saturday
Night” isn’t quite as good, though its
rough style grows on you. It’s helped
along greatly by Randall Berndt’s
psychedelic coloring.
The book’s only real disappoint-
ment is Dan Steffan’s “Terrapin Sta-
tion,” here interpreted as a space
station romance. Though the artist has
good draftmanship and a clean line,
his adaptaion is pedestrian and un-
imaginative compared to the work of
the other artists.
Since only half the book’s material
seems really worthy of this first class
treatment, Grateful Dead Comix does-
n’t rate as highly as it might, but any
fan of the Dead, Truman, Paley (and
Moebius, who contributes the inside
back cover), or mck comics in general
will find this a. fun read.

Some of these bits were reprinted in book form by Kitchen Sink, but some googling now seems to show that they’re not longer in print. I guess these comics aren’t as commercially viable today, since there are presumably fewer Grateful Dead fans? I dunno.

This is the one hundred and thirtieth post in the Entire Kitchen Sink blog series.