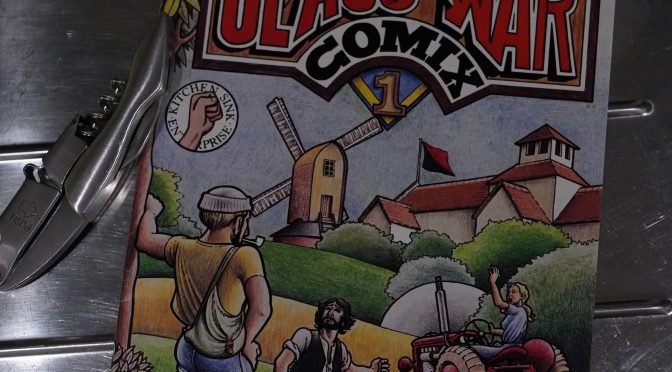 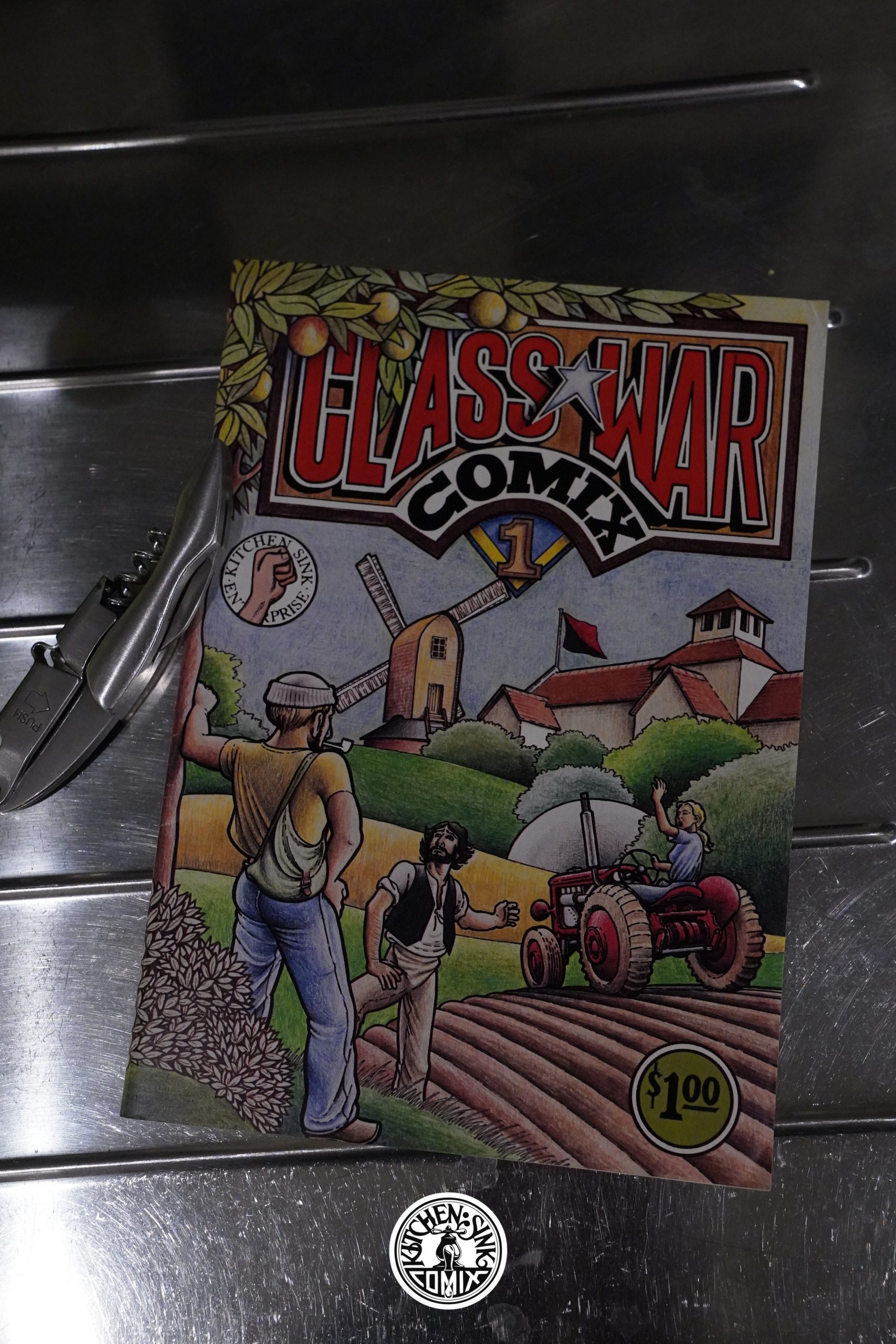 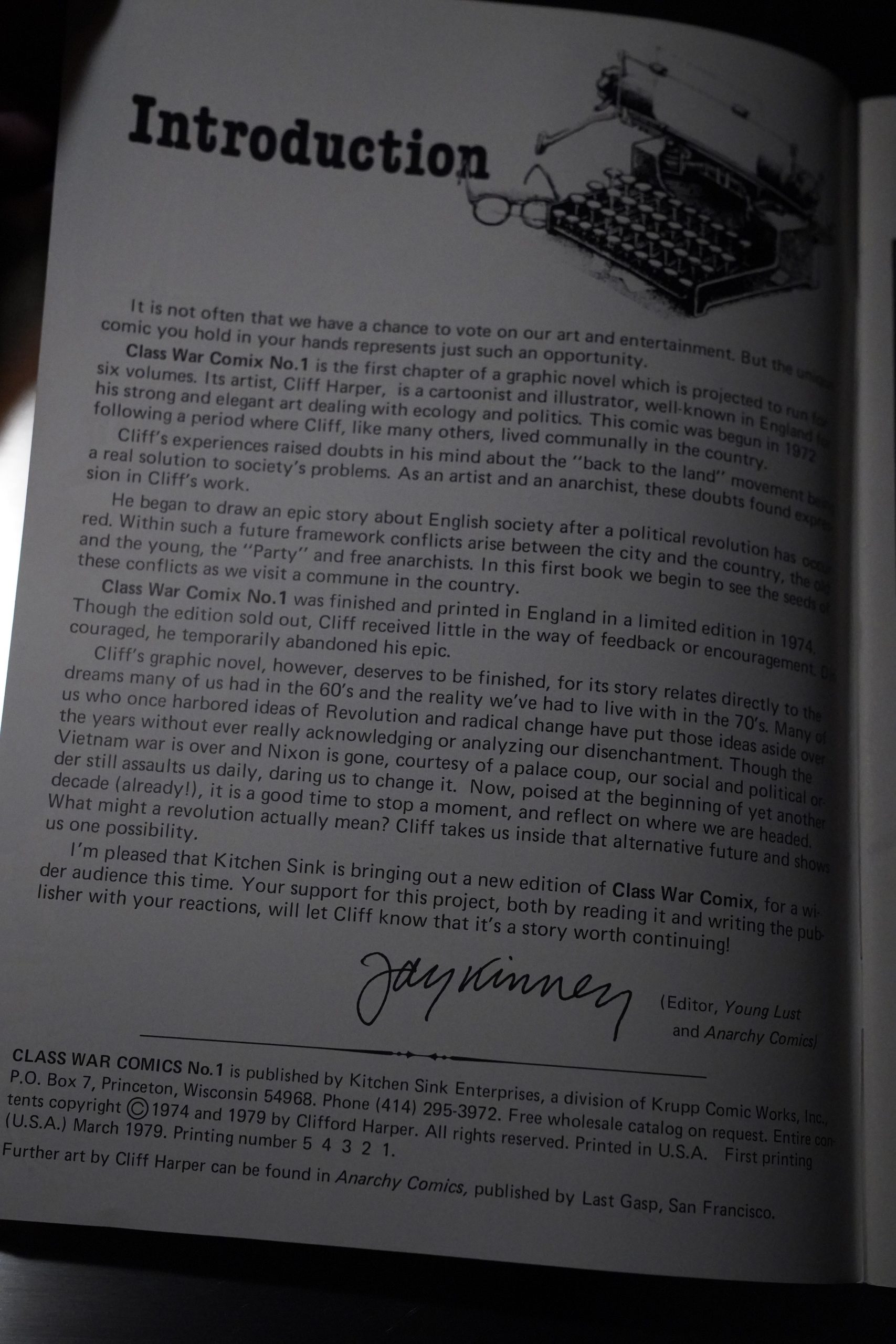 As with many of the books Kitchen was publishing at the time, this is a reprint of book published earlier by somebody else — but this time around, it’s a British underground comic (that was abandoned, Jay Kinney explains, because of the lack of reaction). 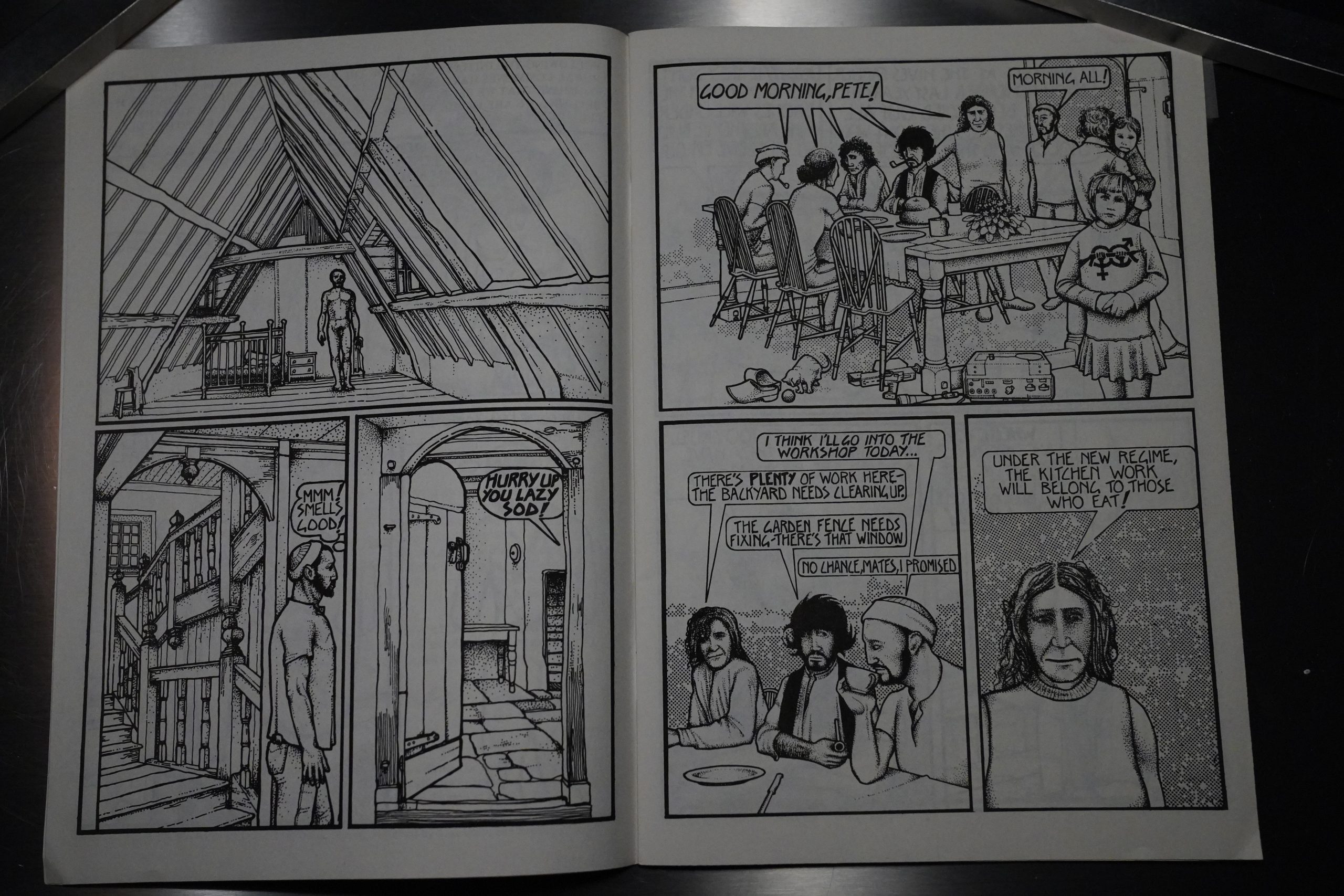 The artist explain in the afterword that the artwork was done before having a story (or script) in mind, but it seems clearly narrative, so I suspect that he meant that he hadn’t written the words. 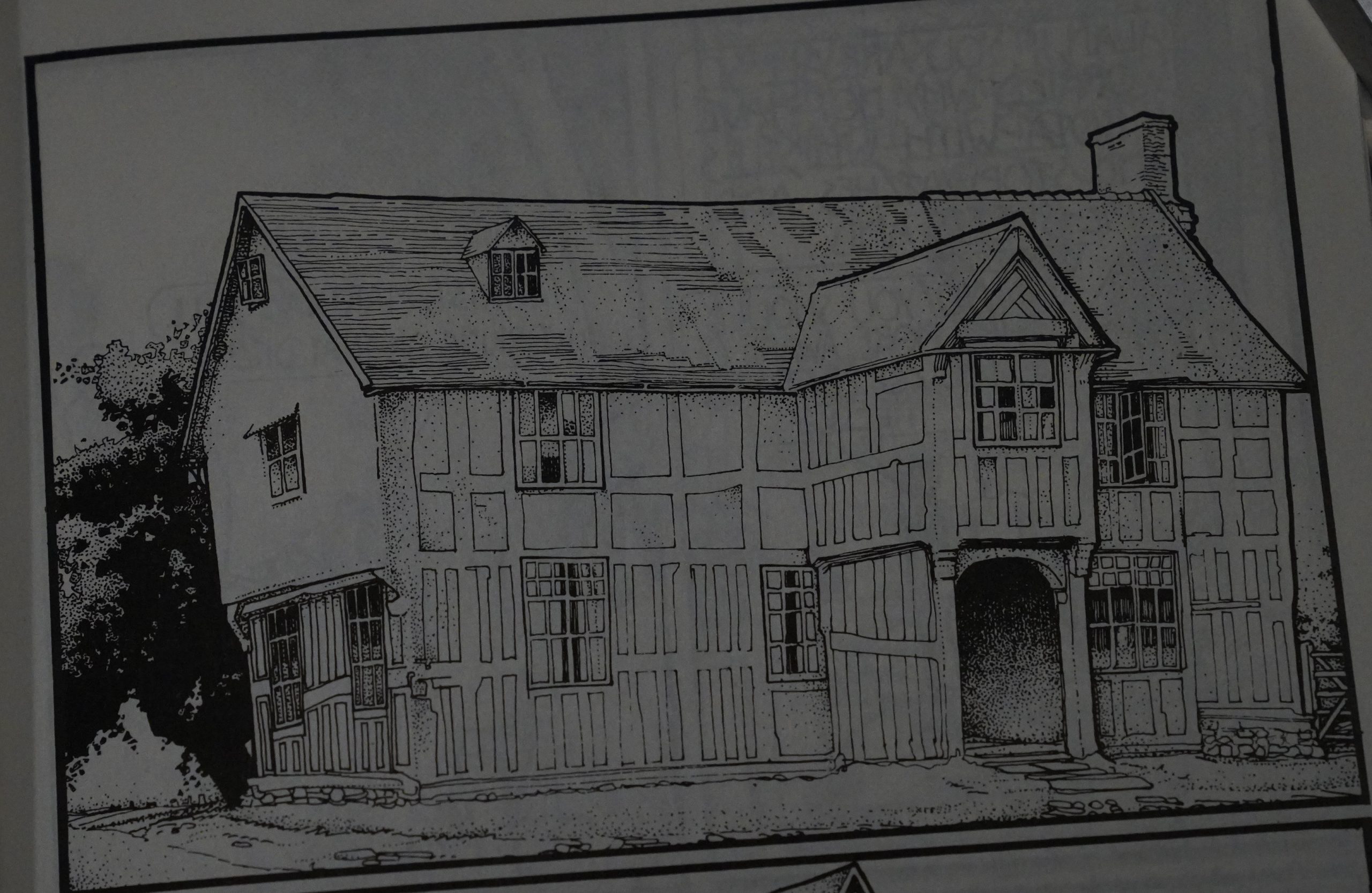 The artwork looks like it’s referencing photos a lot. Or rather — that he’s tracing photos. But that’s a very nice house. 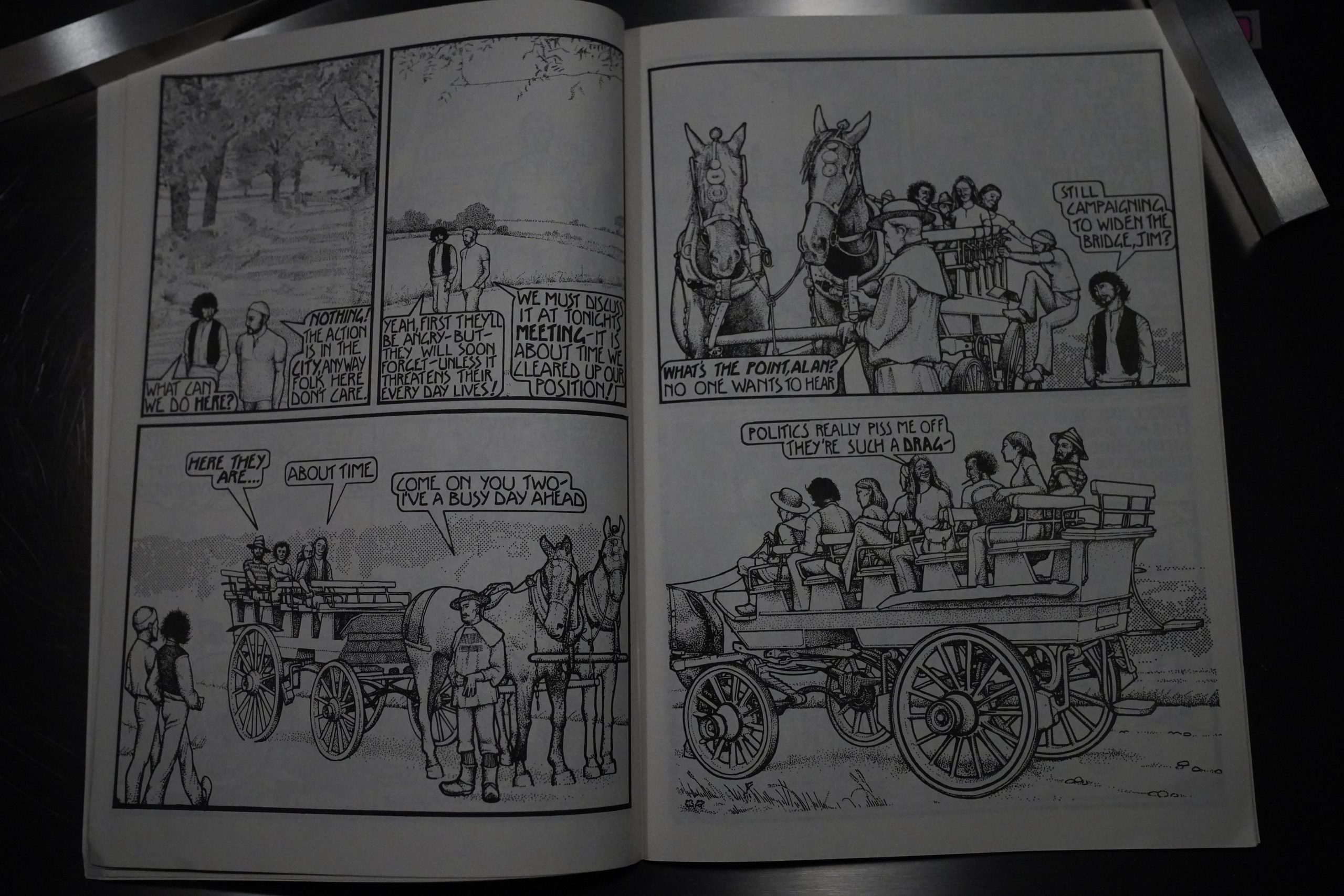 Whenever he’s not drawing people, it looks pretty good?

The storyline is about living on a commune in the near future (there’s been some kind of societal breakdown), and it’s pretty interesting. 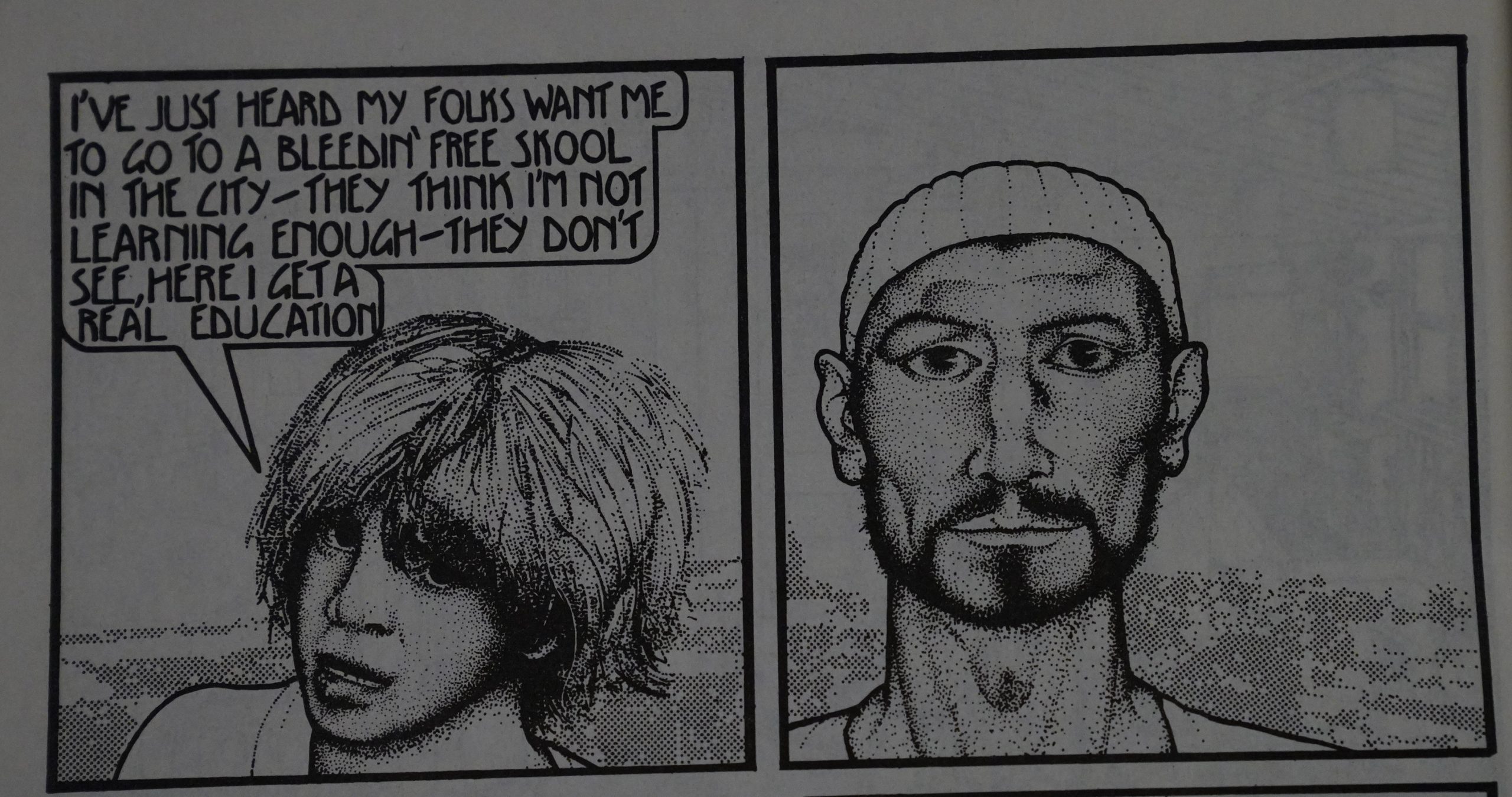 The faces go from very odd indeed to quite nice.

But… how on earth was this done? I guess that’s mechanical tone in the background, and then the linework looks inked as normal, but all that stippling… if this had been made ten years later, I would have thought that this had been (partially) printed out on a dot matrix printer, but surely that’s impossible in 1974. So it’s just obsessively dotted?

He’s spent a lot of time on the rendering, and not that much time in getting the faces quite right to begin with.

“A revolution does not march in a
straight line.
‘—Mao Tse—Tung
Class War Comics is the first of
six possible eomix about the
organizing of an embryonic anarchic
society after a successful class
revolution in Britain, and the
personal and political problems that
Would confront the participants and
beneficiaries Of the revolution.
The story takes place in a rural
commune, composed of several
autonomous collectives (carpentry
farming, etc.) , and the characters
are shown going about their activi—
ties, while expressing and debating
the Various organizational, political,
and personal difficulties they face.
The major developing conflict is
that the socialist bureaucracy ,
which replaced the former capitalist
system, is beginning to adopt a
repressive policy against the urban
workers and against the anarchist
elements determined to dismantle
the bureaucracy’s power. The
commune members are reluctant to
become involved in this distant
growing political battle, but they
are aware that they will eventually
have to, as it may threaten their
own autonomy.
Harper’s main statement is that
after a class revolution, the great
expansion Of freedom does not
entail a unanimity of political and
social views, but rather a diversi—
fieation. Unity exists in the desire
to create a better existence, not in
how to accomplish it. It is this
diversity of views that is at once
the wealth and retardant of an
ongoing revolution.
The main political conflict between
the party and the free anarchists
in the book is not new and has been
around since the battles between
Marx and Bakunin in the First
International. The question of
centralized power (the state) vs.
decentraUzed power (the rights Of
local organization and individuals)
has erupted in the past into shooting
Wars between communist and anar—
chist (for example the Russian and
Spanish Revolutions) . It will be
iriteresting to see how the conflict
progresses in the series’ possible
Harper’s beautifully detailed
artwork includes exquisite drawings
of English manors, farmhouses, and
countryside that superbly create
a believable rural atmosphere. His
stippled shadows and interiors Of
forms pr•oduce a light, open air that
is easy and pleasurable to view.
Simply, the book is a visual delight.
In his afterword/ Harper apolo-
gizes for the rhetoric in the book I
feel that the use Of rhetoric is
appropriate considering that it
would be bandied about in such
political situations, but if he wishes
to make it more elegant and eloquent ,
I certainly have no objections as long
as he continues to directly address
the political issues.

Harper didn’t continue the book, but he’s a successful illustrator.

This is a well-drawn, fascinating tale about real people, communal living and the potential complications of living outside normal society.

This is the fifty-second post in the Entire Kitchen Sink blog series.