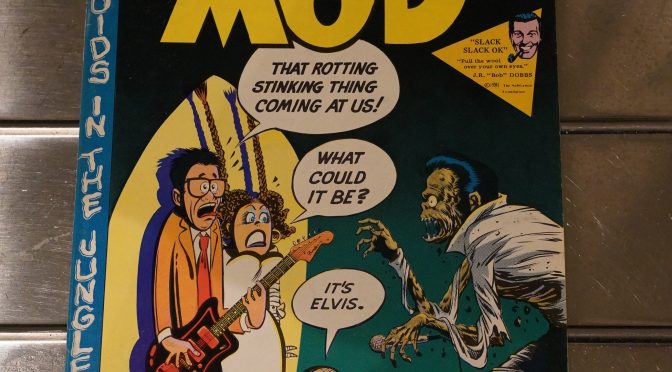 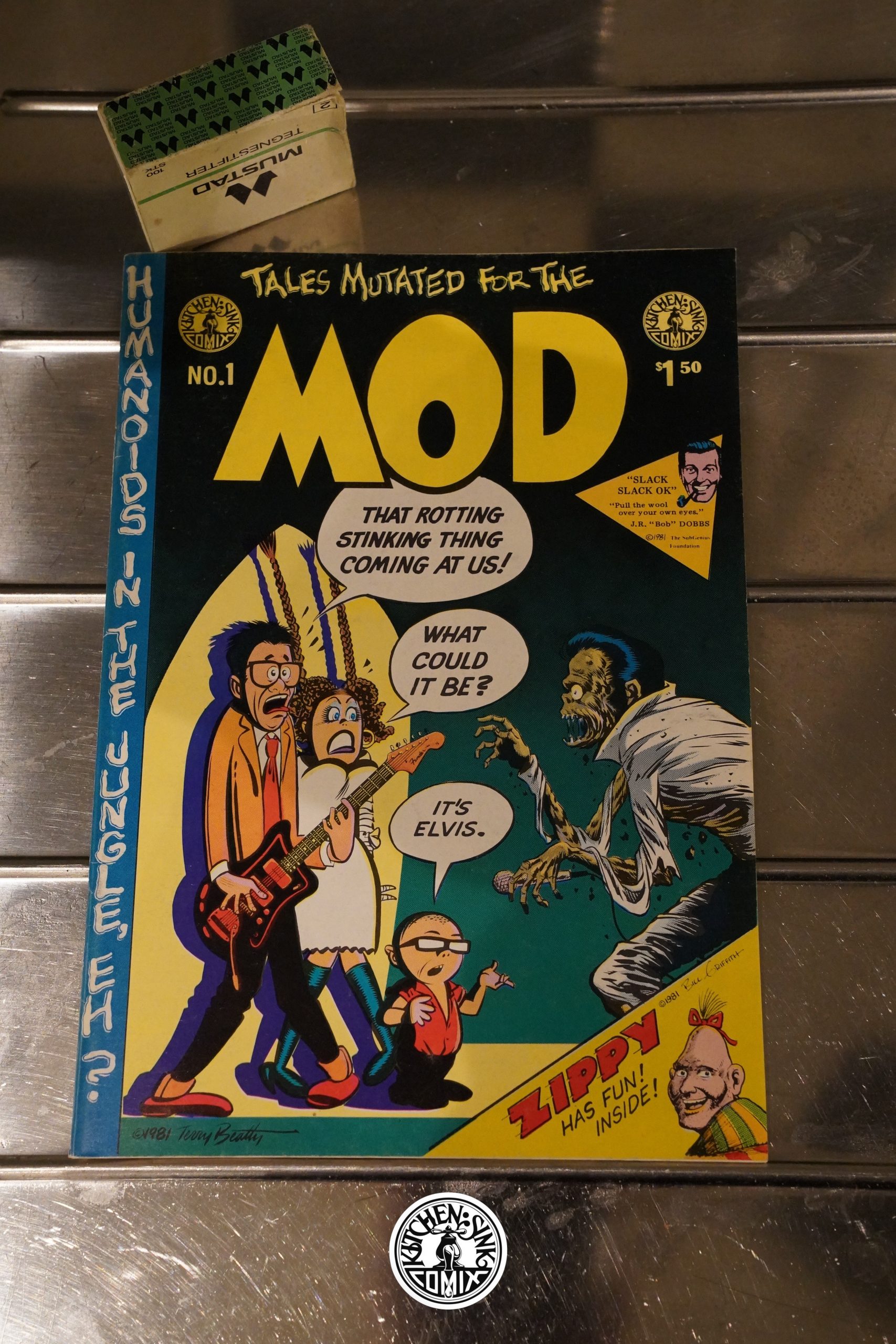 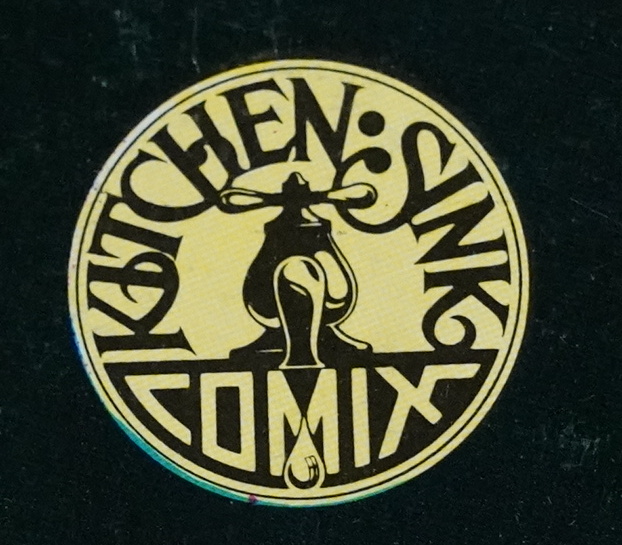 I think this is the first comic Kitchen Sink published with the new logo? A new logo for a new era. 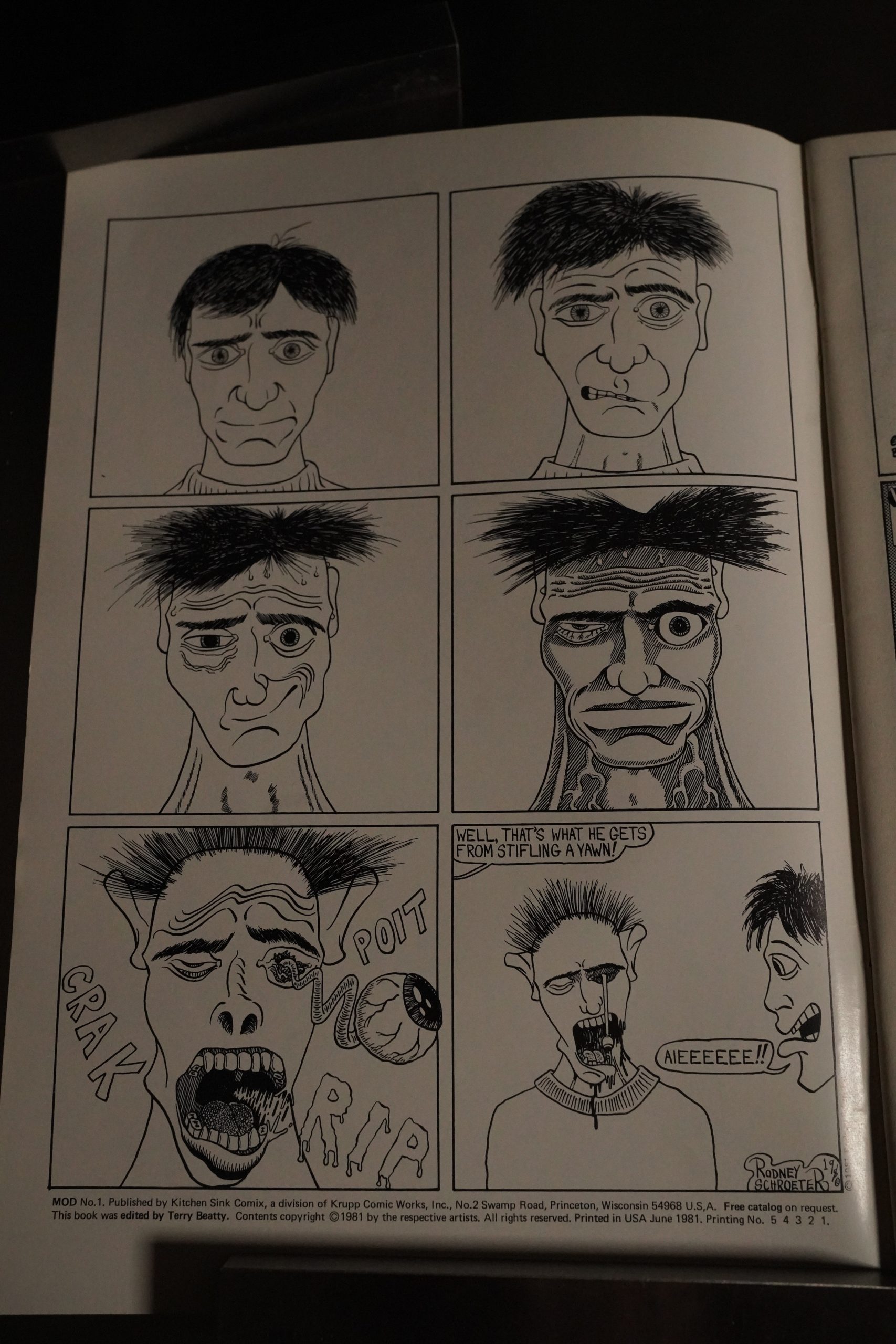 This book is edited by Terry Beatty, and he also contributes the majority of the pieces. So I guess it’s more like a solo book, but with some invited guests, like Rodney Schroeter above. 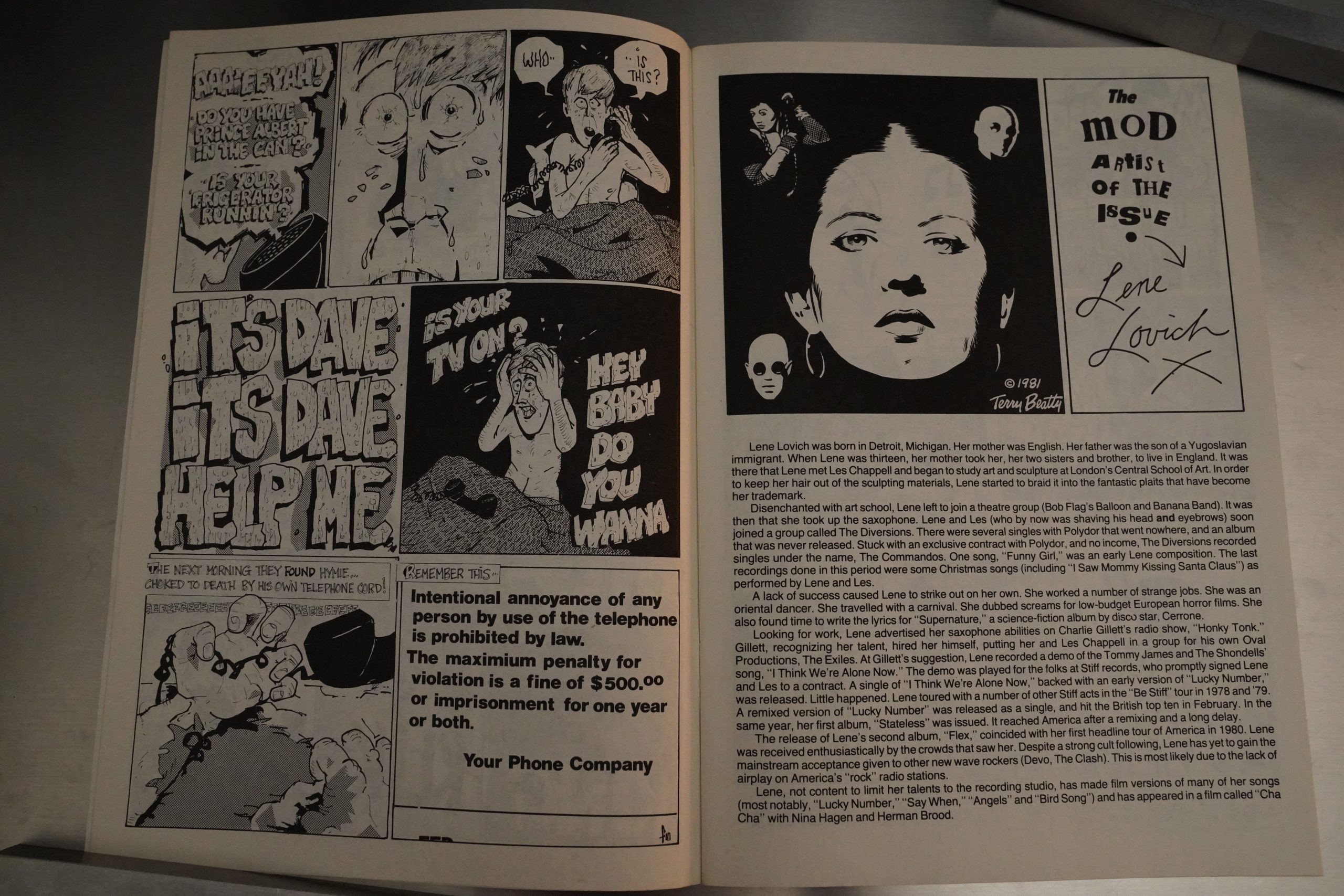 And it’s a very random collection of things. There’s a spooky story that doesn’t go anywhere to the left (art by Geo Cochell, if I’m parsing the signature correctly), and then a page about Lene Lovich? Well OK. 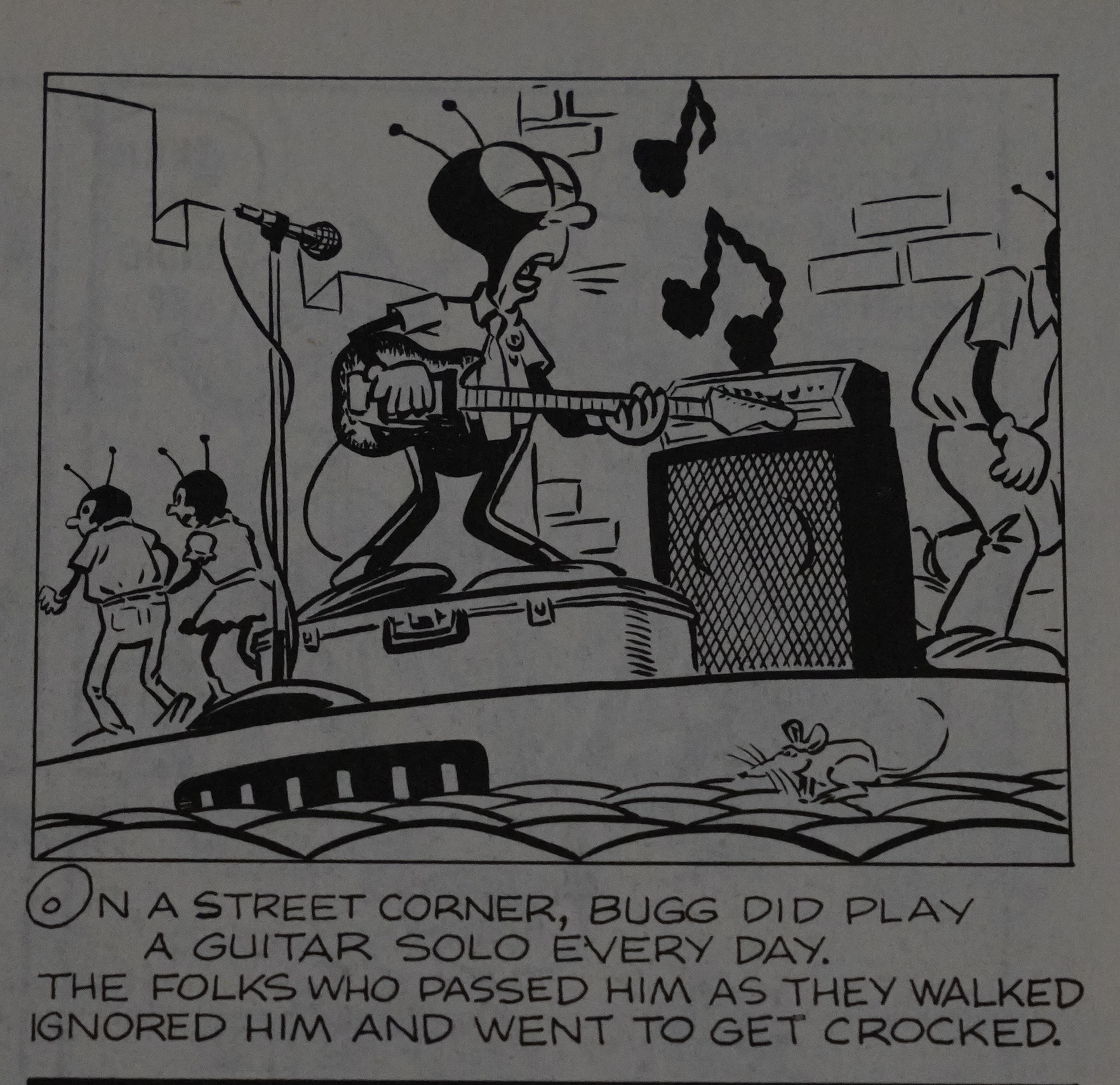 But it’s mostly a book where Beatty can strut his skills at emulating different art styles. 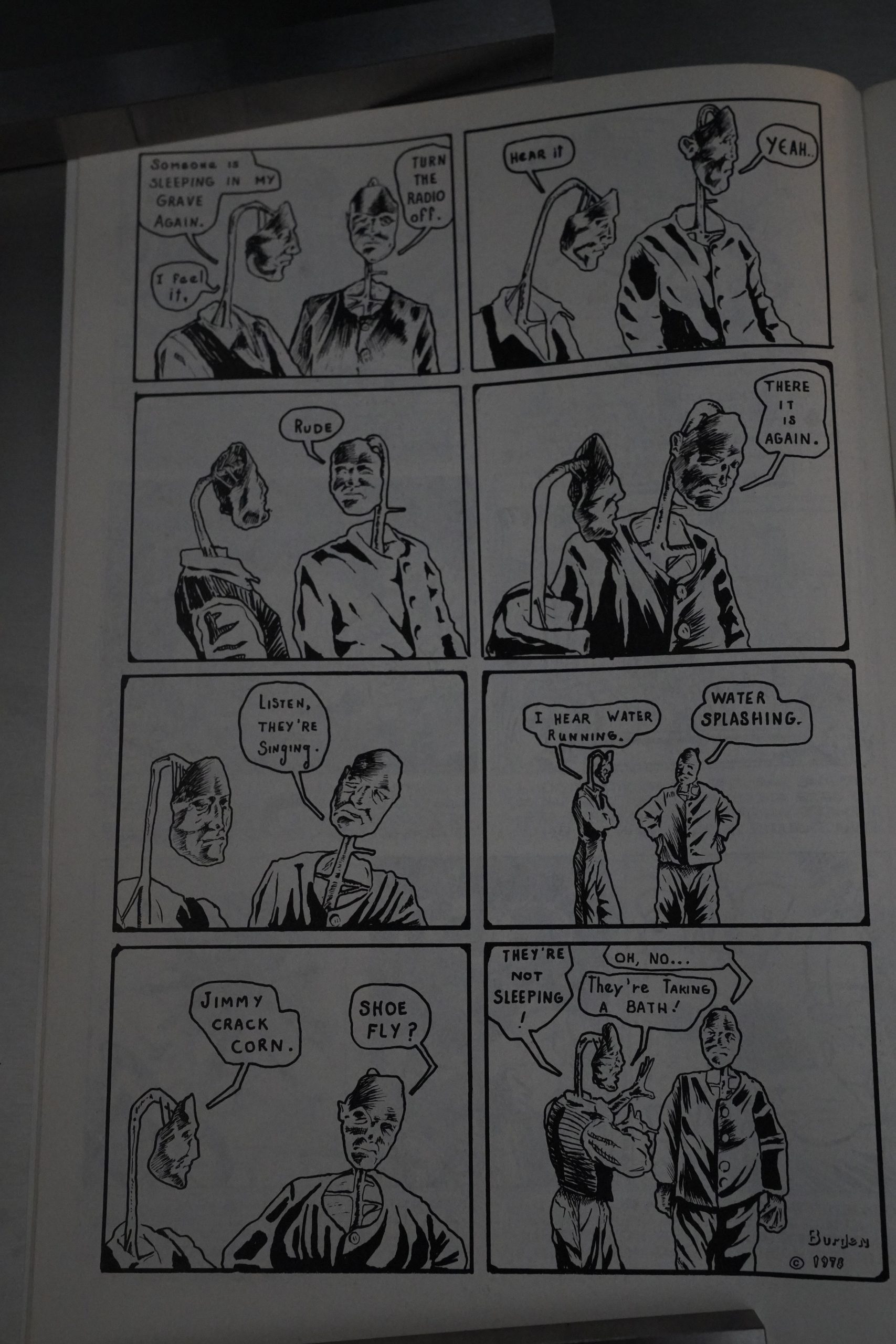 Bob Burden shows up for a few pages… 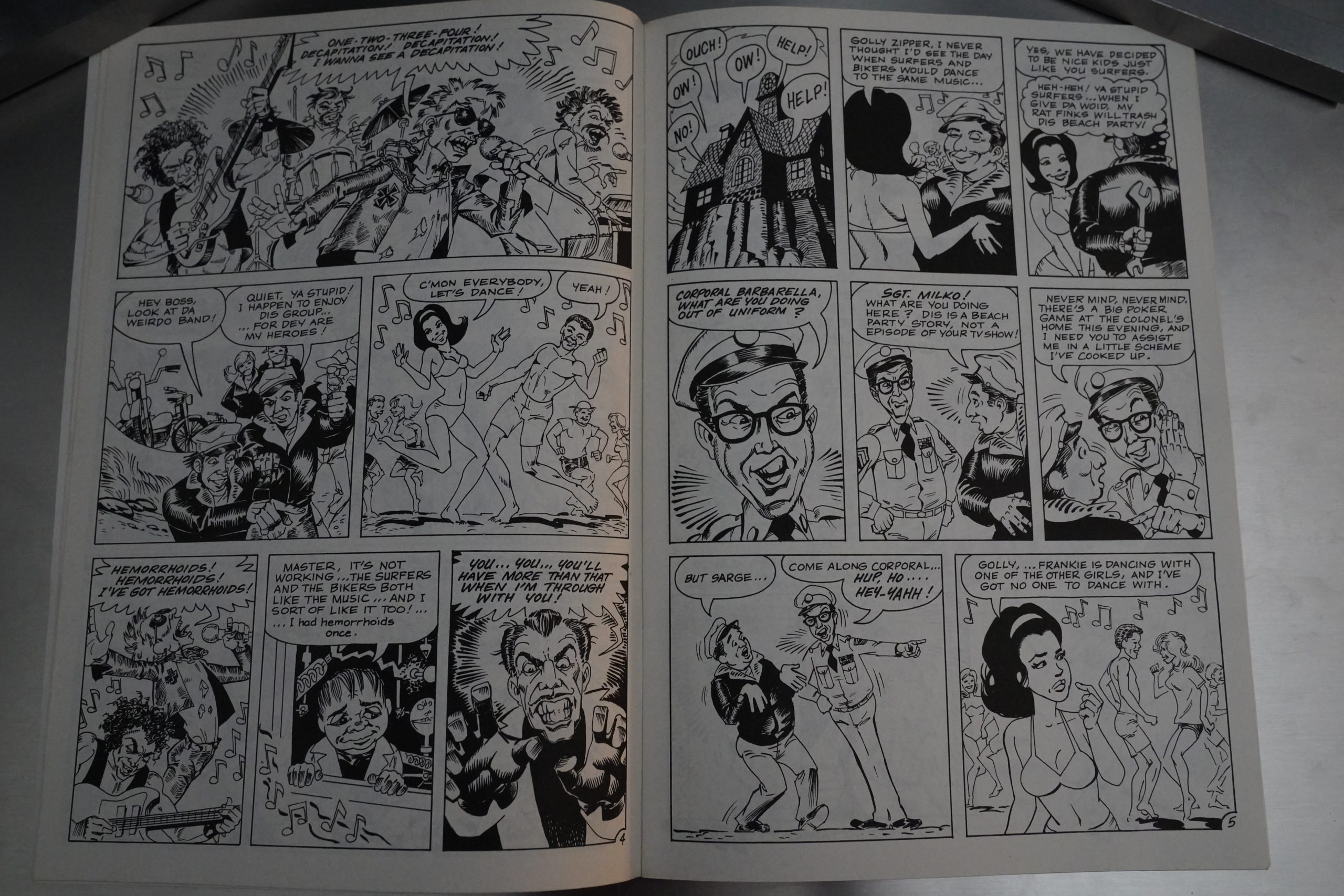 … and Gary Kato illustrates an inspired piece of lunacy. 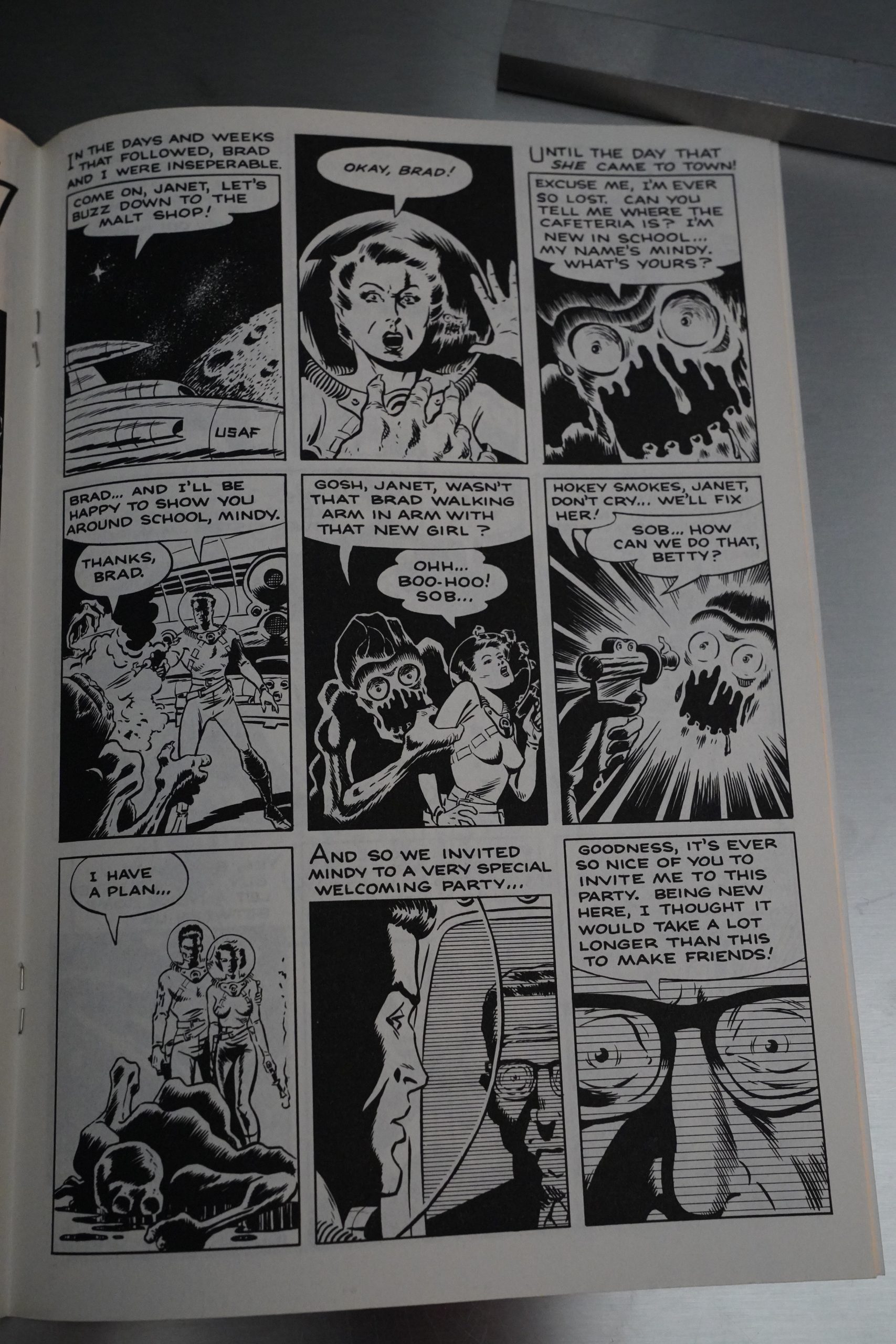 About halfway through the issue, it really clicked into place for me: It’s kinda brilliant? Like this mashup (by Beatty) of a romance comic (in the text) and a Wally Wood-ish sci-fi horror story (in the artwork). Was Beatty attending art school around this time? It’s really fun. 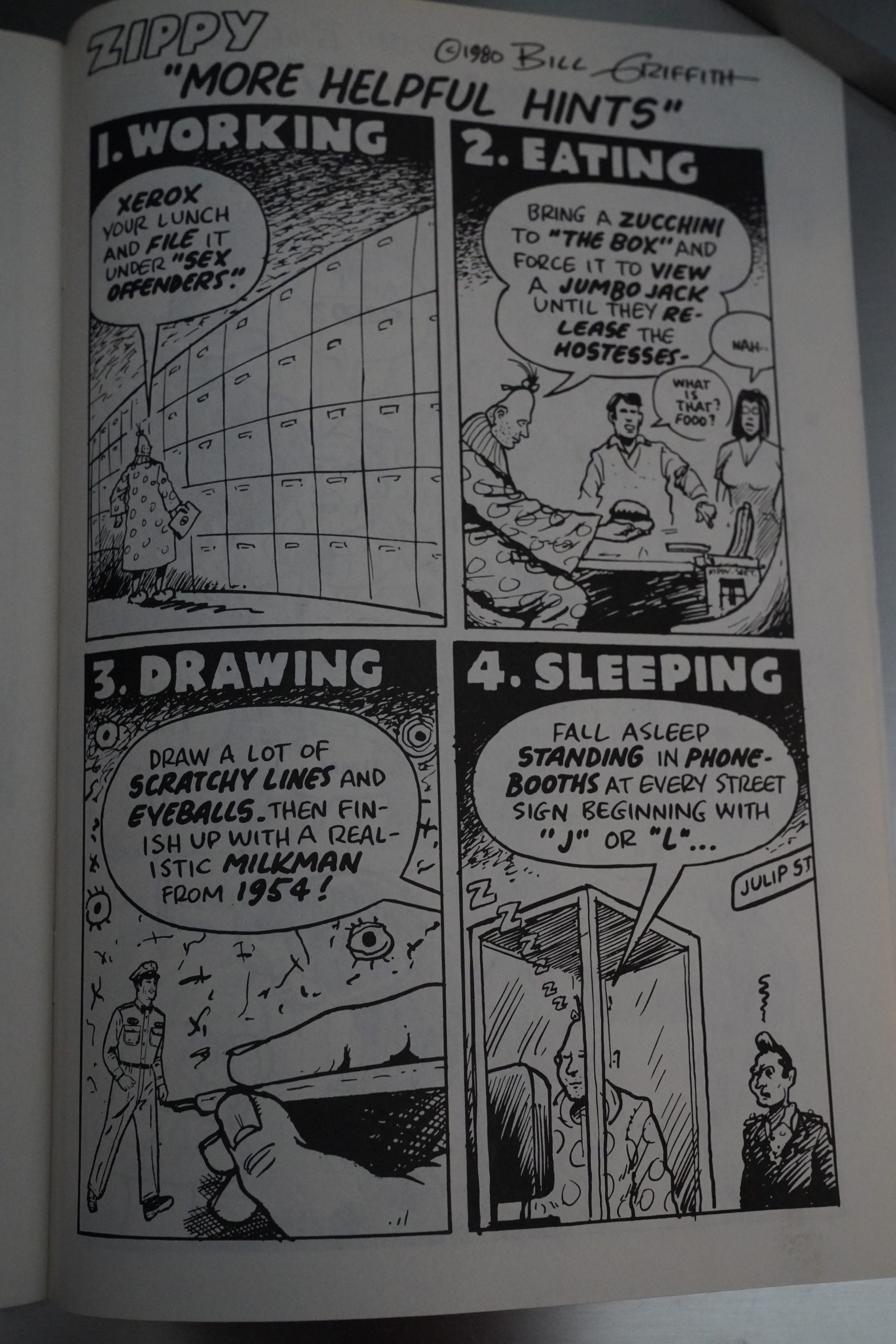 And finally, and incongruously, we get a handful of Bill Griffith pages.

Surprisingly, this book is a really good read. There’s a couple of things that don’t quite work (the inside front cover brought the expectations way down), but it’s a fine little anthology.

The titles before me are Mod and Com.
ical Funnies. The first is edited by Terry
Beatty , former Buyer’s Guide columnist and
presentday fan artist; the second is a
tabloid offshoot of the old punk fanzine.
The source of Mod’s title is especially tell-
ing: it works both as a parody of the Kurtz-
man EC title and as a reference to a mid-
’60s English rock movement (which en-
joyed 15 minutes of renaissance in 1979
England). Beatty’s cover carries at least
part of this punning premise through with
a parody of the premiere Mad showing
Kurtzmanian caricatures of new wave
rockers Elvis Costello and Lene Lovich be-
ing menaced by the corpse of Presley. But
he forgets about the second halfofhis pun:
neither Costello nor Lovich could be called
“mod” (a much more precise critical term
with clearer musical antecedents than the
broad *’new wave”). The results are only
half clever. •
But Beatty is less interest,ed in mod—a
fairly lean rock form exemplified by the
early Who or more recent Who-derivatives
like the Jam or Secret Affair—than he is in
the orotund phrasing of Mod’s patron
priestess Lovich. A highly theatrical rock
artiste, known for her broadly gothic man-
nerisms, Lovich possesses a style of new
wave that is crammed with self-conscious
pastiche. The singer is enshrined within
the premiere Mod as “Artist of the Issue,”
and Beatty seems to have taken her par-
ticular mode of art to heart. Just as Lovich’s
music is dependent on a recollection of
its sources (the eye-rolling theatrics of
German horror movies, cabaret) for full
appreciation, Beatty’s Mod material is
equally tied to its wellsprings.
Fully half of Mod devotes itselfto fannish
media parodies, an overdone form at best,
and has less to do with rock than with the
broader concerns of over-fantasized
‘American youth. Giant robot jokes,
Fleischeresque bugs, the inevitable EC
parodies, a beach party strip—the material
is familiar and rote like a Saturday Night
Live talk show skit. Beatty the scripter
(who’s responsible for most of the parodies)
may be able to inject some humor or out-
rageousness into this format, but it’s
dimmed by deja vu. Lovich, at
least. has chosen a sufficient-
ly arcane source for her pas-
tiches: Beatty’s material has
been done to death. What’s
next? A haunted house com-
edy strip?
Not all of Mod’s material
is so openly derivative. Brit-
isher Hunt Emerson’s back
cover discourse on English
rock fashion even contains
the book’s one genuine mod
reference (circa 1979) as he
discusses his own involve-
ment in rock’s
“sartorial
wars” through the ’70s. (“l
was too young to participate
in the first great mod move-
ment, but I did own an op•art
tee-shirt. ‘ Emerson’s in-
volvement as art designer for
the English Beat, a ska/reggae
band that broke through dur-
ing the British mod renais-
sance, makes him an apt corn-
mentator, but his discussion
of the British rock scene prob-
ably will only make sense to
an American reader weaned on the music
magazine Trouser Press. Still, his stylized
geometric fashion parodies are witty and
telling.
But newcomer Bob Burden’s five one-
page entries are the most happily indi-
vidualistic: non-sequitur parables set in
either Jean-Paul Sartre’s afterlife or a kid’s
desert.

This is the sixtieth post in the Entire Kitchen Sink blog series.