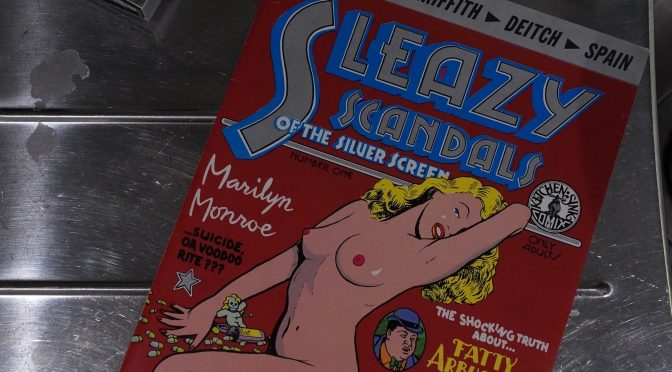 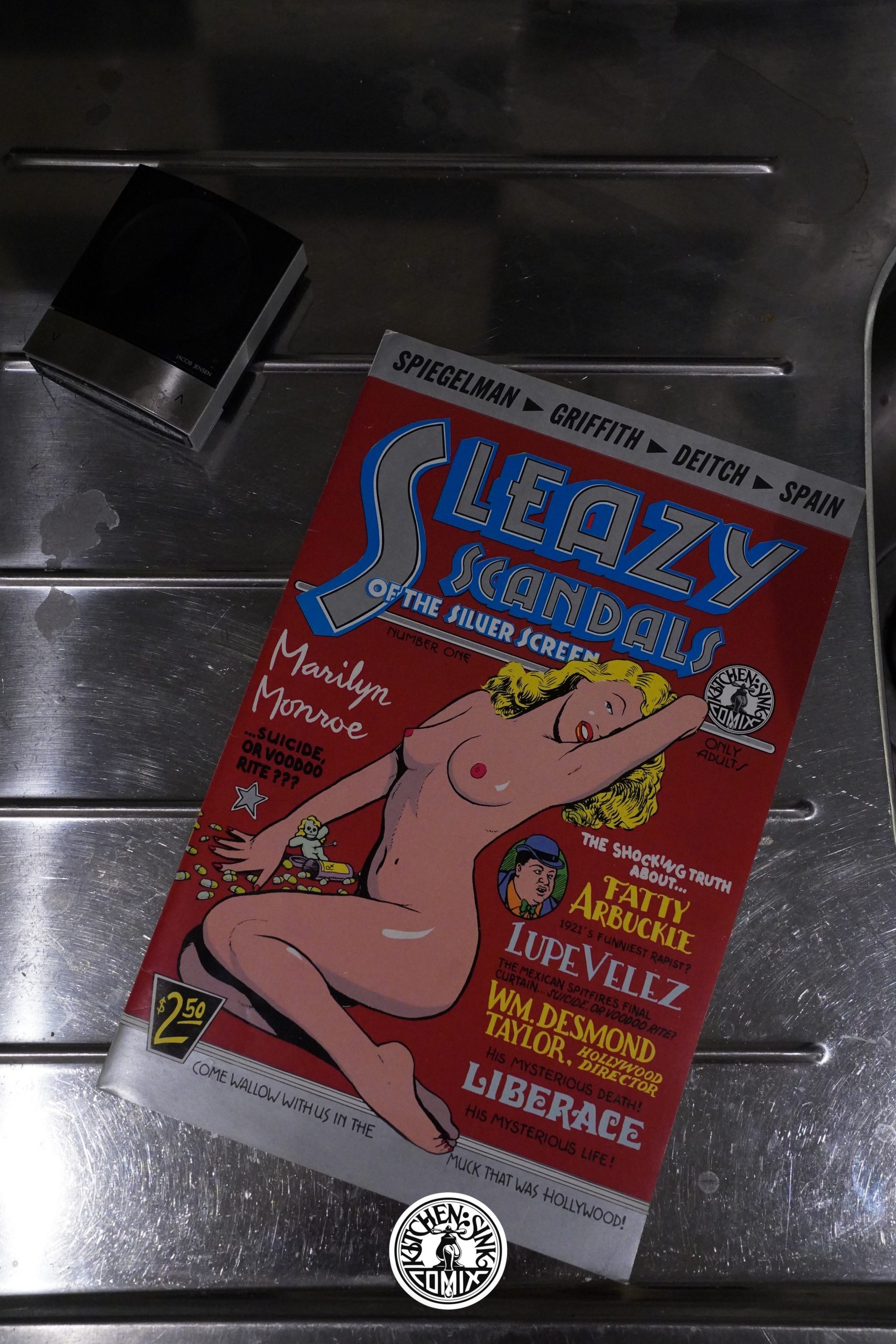 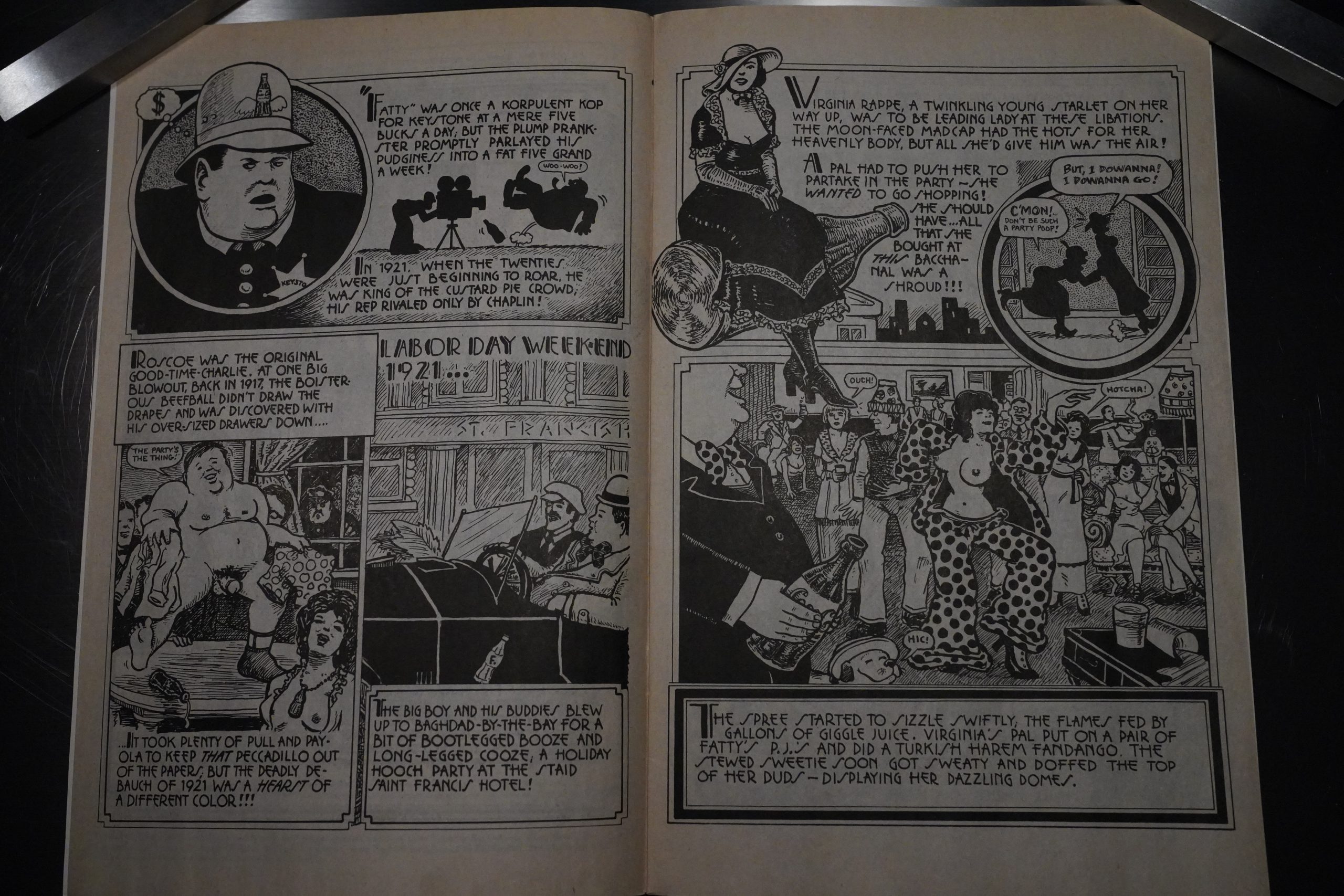 The cover proclaims that this is a collection of Hollywood scandals, and it starts off with one of the most famous: That time Fatty Arbuckle (possibly) killed a woman by (possibly) raping her with a coke bottle.

The story is signed Al Flooglebuckle, which is Art Spiegelman, and I wonder what’s up with the pseudonym. Afraid of getting sued? At this point? The artwork doesn’t scream “Spiegelman”, but the er “classy touches” like including a Coke bottle in every panel is very on brand. And also tasteless as fuck, as the story is played for yuks. 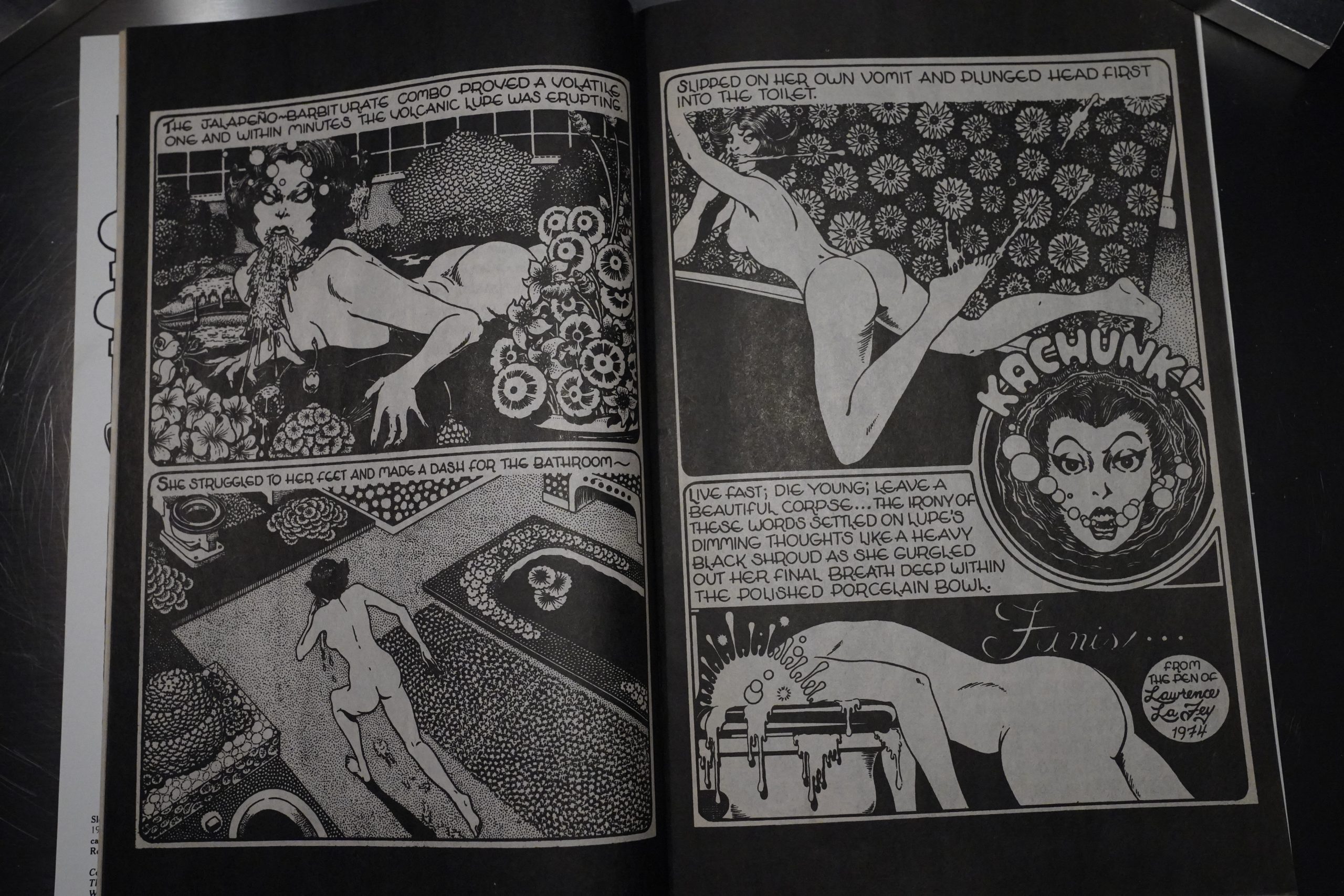 The second story, by Jim Osborne, depicts another woman dying, and again it’s for yuks, and I’m starting to wonder whether this is just going to be a catalogue of misogynist atrocities? 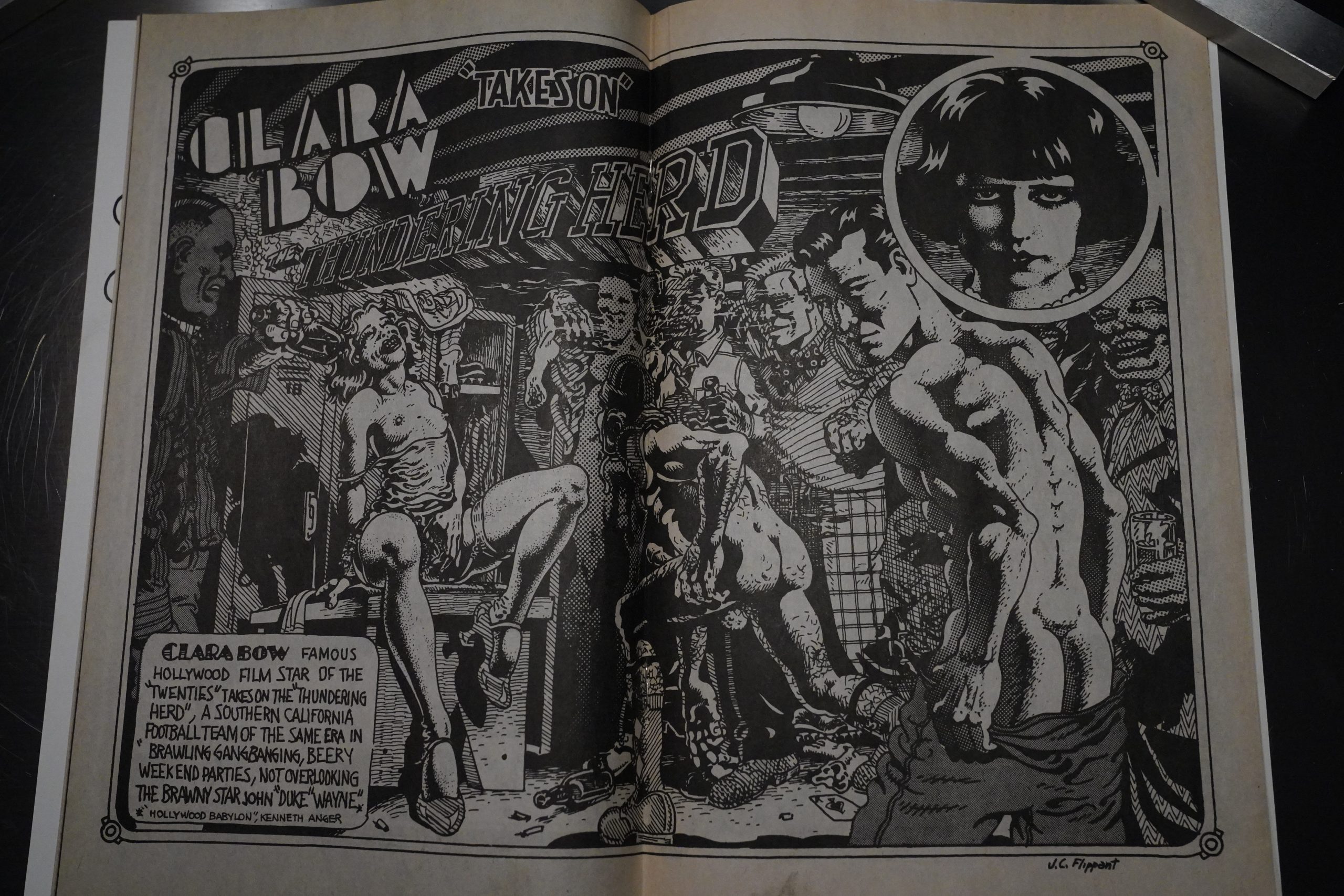 But at least Clara Bow has fun in Spain’s two-pager. 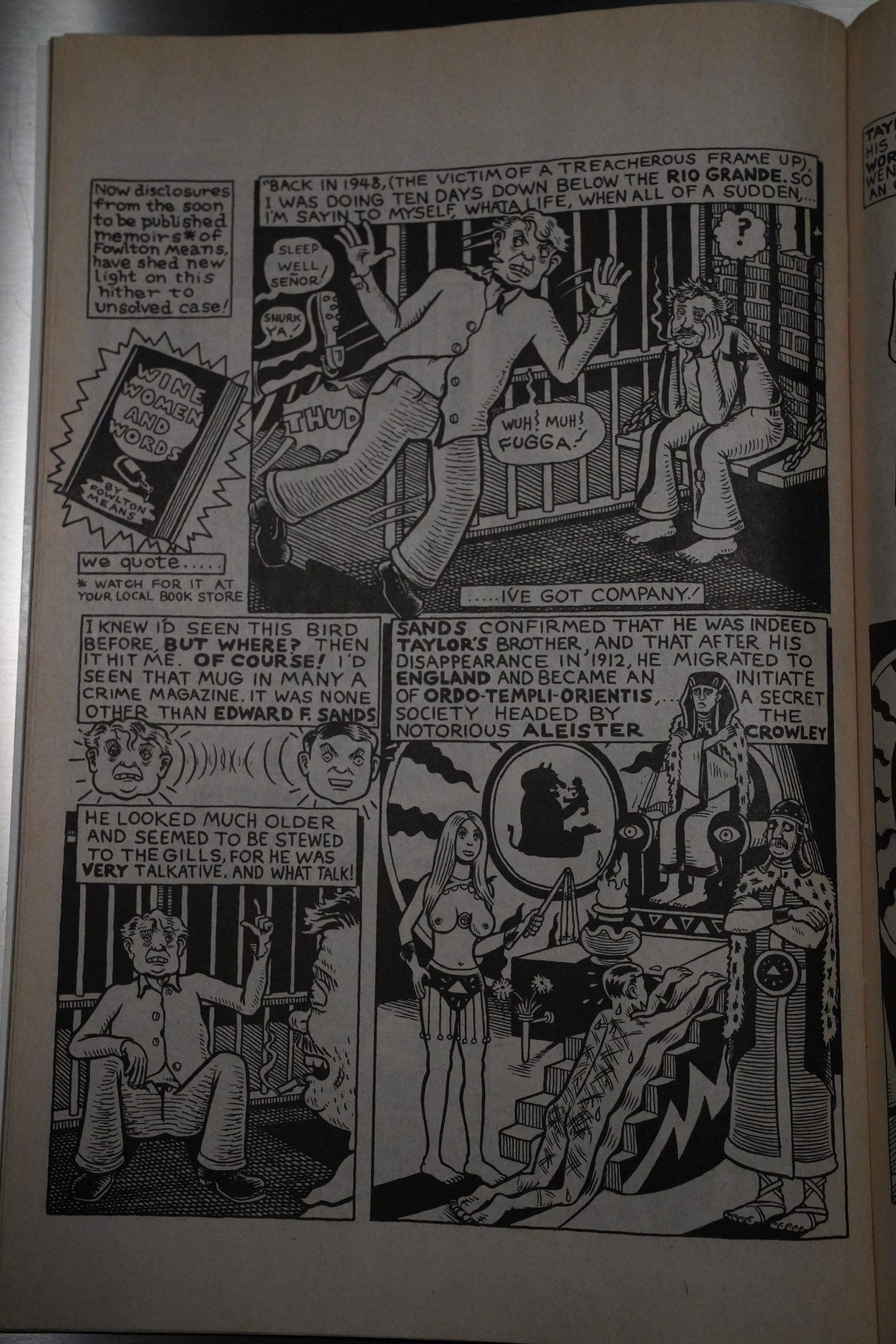 And Kim Deitch goes off on one of his oddball excursions into… paranoia. I mean, I love Deitch, but his pages here read like a plot recap of one of his longer epics, and it’s really tedious. 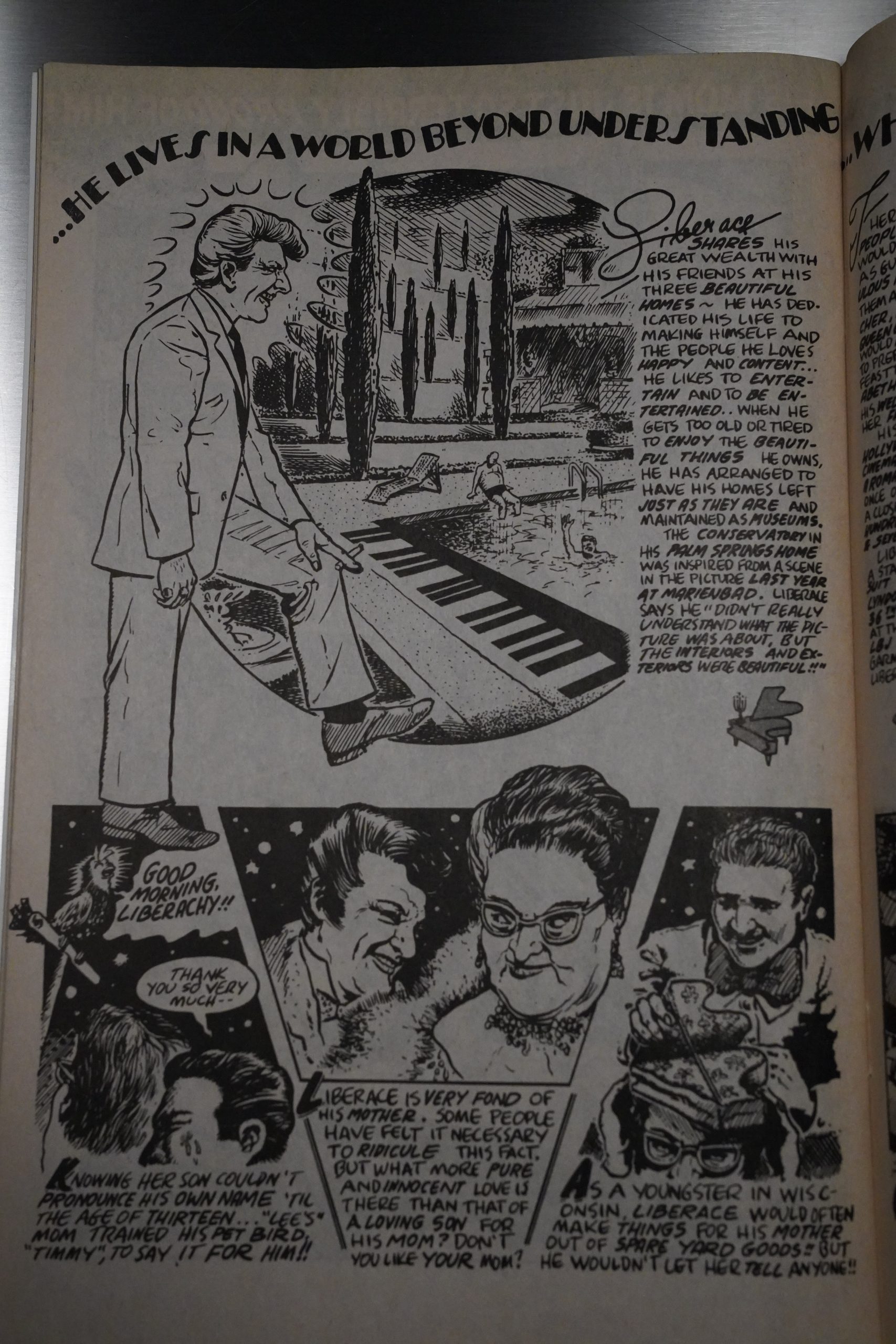 Finally, Bill Griffith does a piece on Liberace, which isn’t particularly scandalous. The subtext is, of course, that he’s gay, but it’s not stated outright, because he was still alive when this was published, I guess?

The weakness in Sleazy Scandals is the story about Liberace at the end of the book, which reveals no scandals whatsoever but simply the privileged life of a rich, eccentric celebrity.

This book is a showcase of stories
by some of the superstars of under-
ground comix and more than tarnishes
tinsel town tradition. It is a must-own
tour de force of sleaze for all fans of
great comics, and especially for those
familiar with the likes of Kenneth
Anger and the silent film era.
Maus creator and RAW editor Art
Spiegelman’s 8-page “Fatty’s Fatal
Fling” is terrifying, hysterical and sad
all at the same time. Spiegelman deftly
tells the sordid story of silent screen
comedian Fatty Arbuckle, whose
lecherous lifestyle proved fatal to both
his career and a young Hollywood
starlet.
Spiegelman’s linework is exception-
al, his layouts are innovative and his
script is chock full of amusing alliter-
ations that add to the overall richness
of the piece. Thankfully, the rest of

These pieces are all brilliantly writ-
ten and illustrated by true under-
ground masters. Though they make
light of the dastardly goings-ons, the
stories actually point out what a
strange, mixed-up evil creature man
can be.

I guess he liked it.

Deitch is interviewed in The Comics Journal #123, page 74:

BEAUCHAMP: Inoking back, are there any stories you
regret doing ? Stories that, nowadays, you nouldn ‘t Bunt
people to know you did?
DEITCH: [Laughter] Well, sometimes I feel twinges Of
guilt about that William Desmond Taylor story that ap-
peared in Sleazy Scandals of the Silver Screen. I don’t
really “regret” doing it, though.

This is the forty-sixth post in the Entire Kitchen Sink blog series.