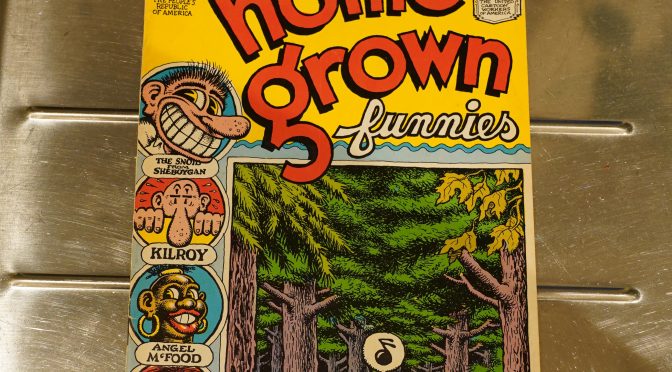 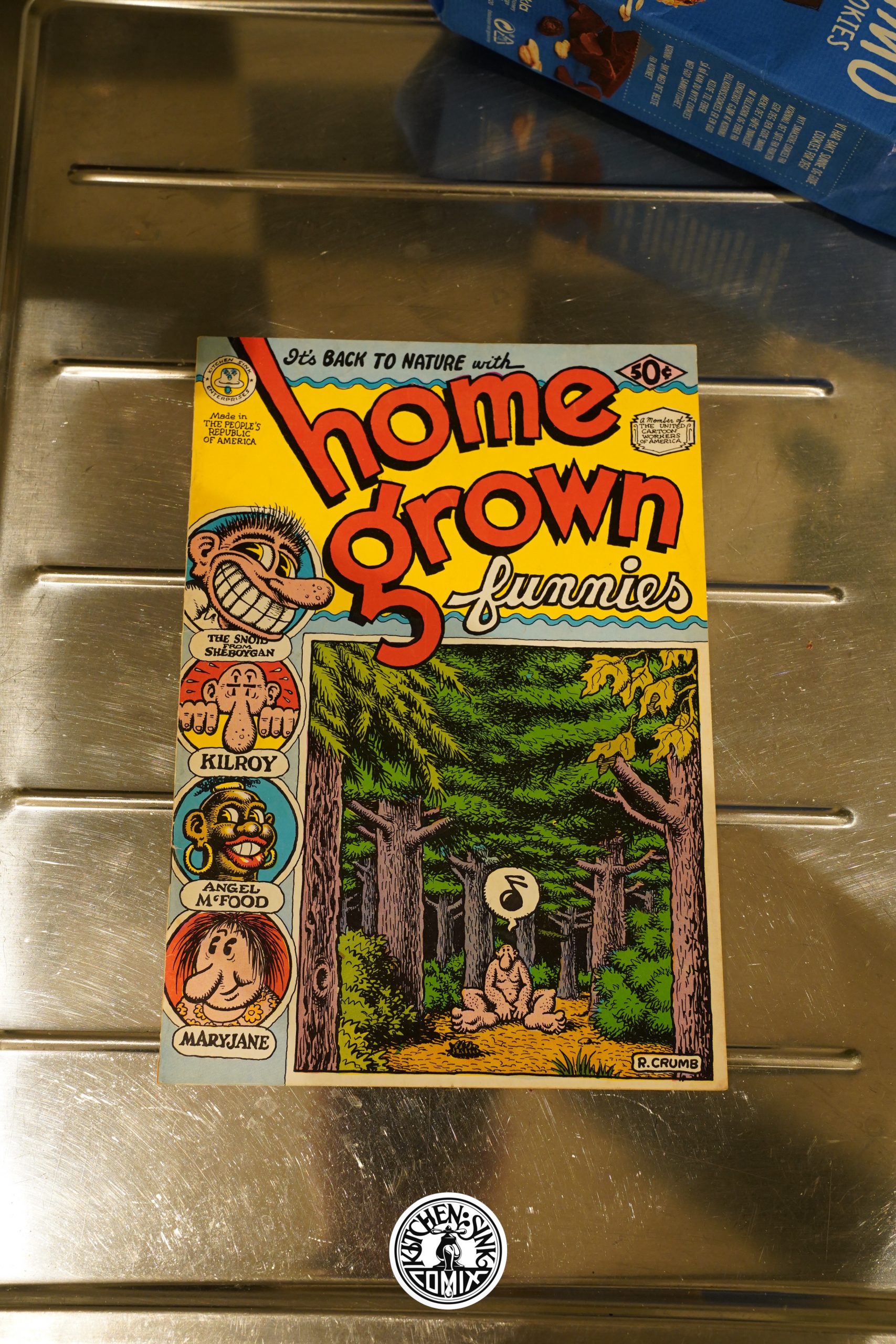 Crumb was, of course, the biggest commercial success in underground comix. I mean, by a ridiculous degree: I’m guessing he stood for a mighty high percentage of the total market cap.

So all the underground publishers wanted his books, and he ended up giving them books in a sort of round-robin sort of way: One for Last Gasp, one for Print Mint, and now one for Kitchen. 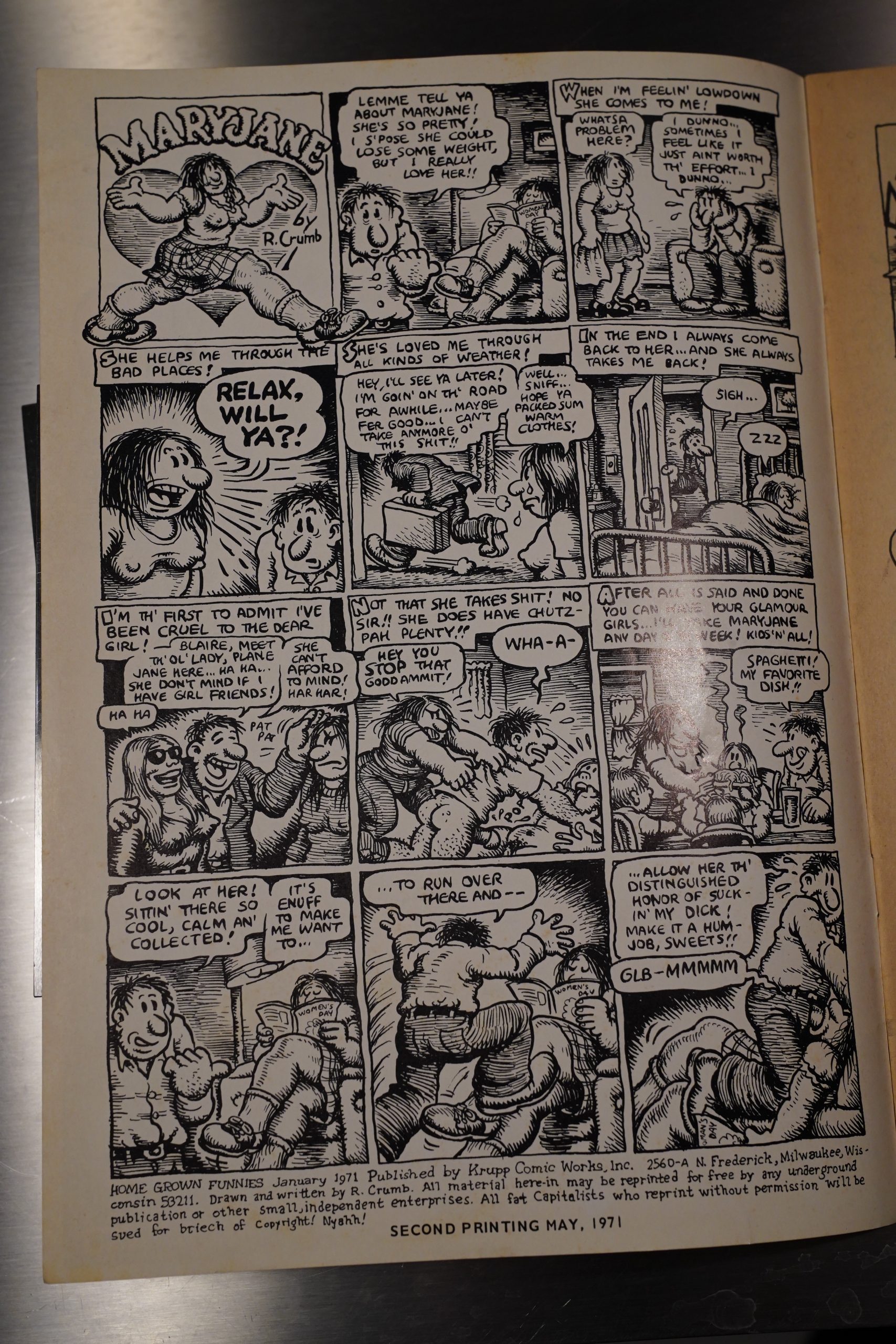 And it’s pretty thrilling to read this book. I read Fantagraphics’ complete Crumb edition the other year, and I was bemused at how unimpressed I was. I mean, I loved Crumb when I was a teenager, but reading the work again in that decontextualised manner was deadly.

But now, holding this 24 page comic, chock full of Crumb, it’s thrilling again. He’s putting so much into this — there’s no wasted space (while the previous Kitchen books I’ve been reading for this blog seemed to have more than its share of space-filling “will this do?” work).

And note that Crumb is giving all small enterprises the right to reprint the work herein. That’s cool. 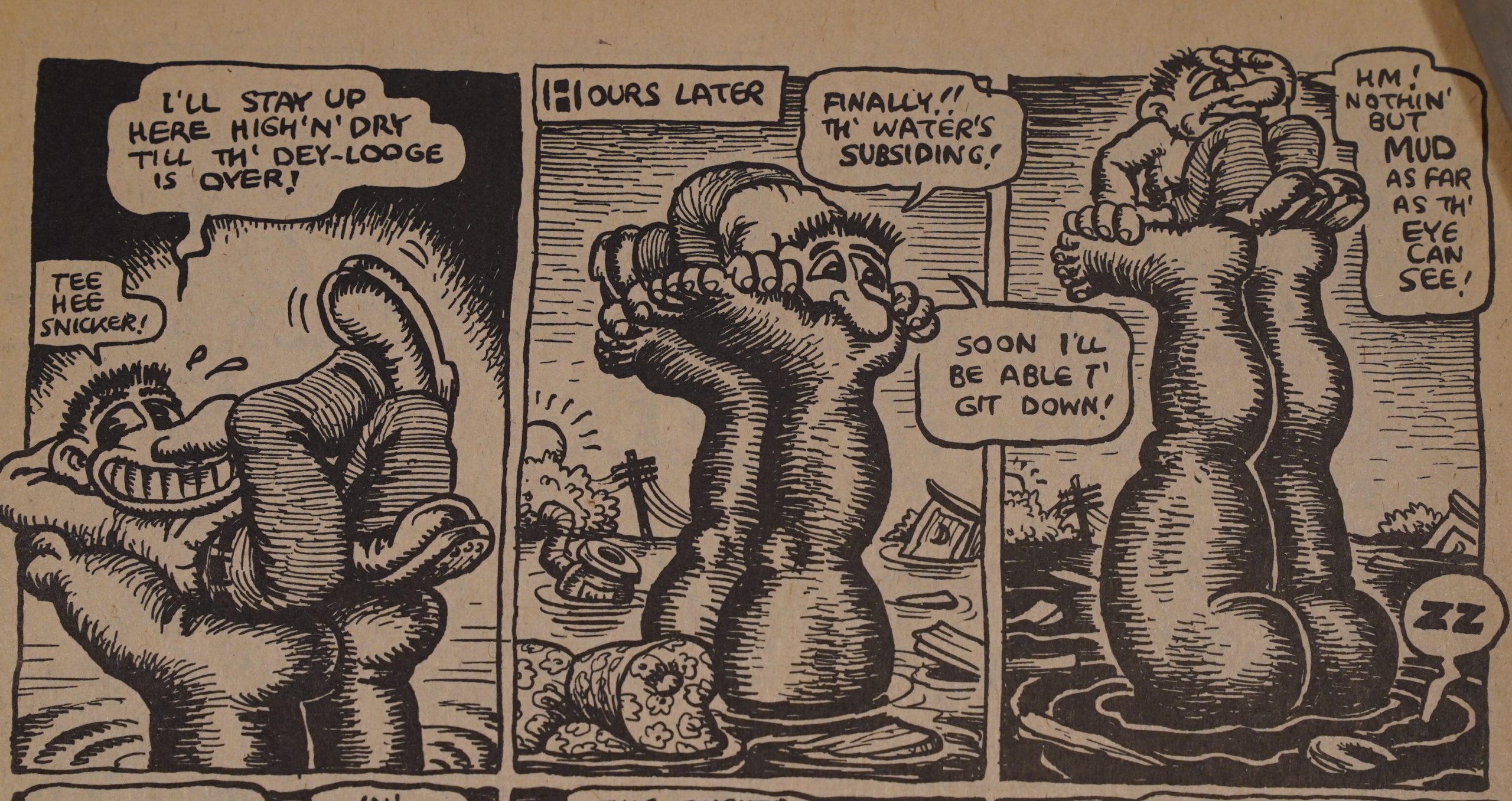 After the piece on the inside front cover, we get the infamous Angelfood McSpade/Snoid er “crossover”, and I’m not snapping any of the more… er… controversial bits for this blog.

I think this is probably the piece that get quoted most when people accuse Crumb of being racist and misogynist? And it’d hard to defend, and I hate doing anything that’s hard, so let’s skip it. 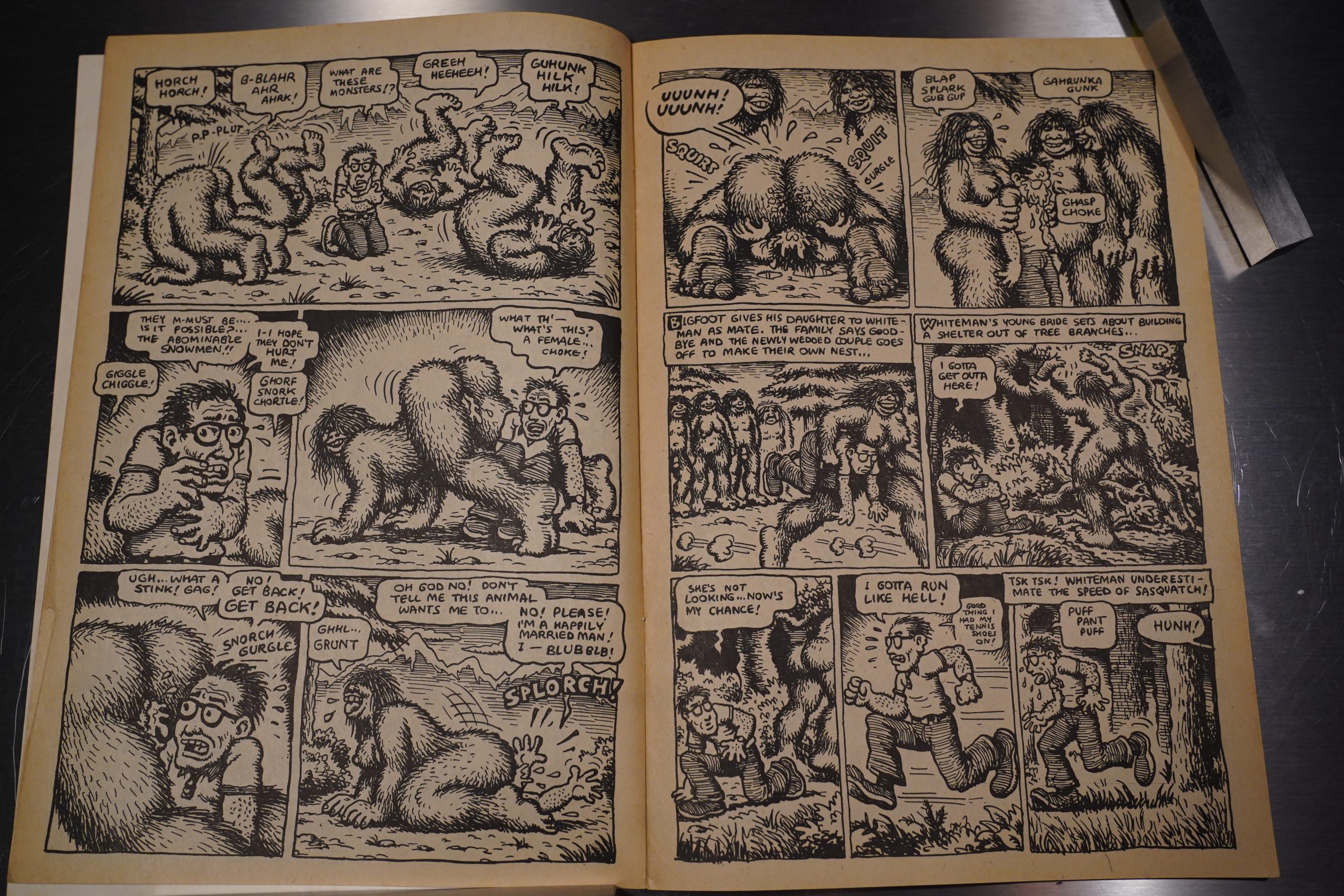 The bulk of the issue is one of Crumb’s most beloved stories: Whiteman Meets Bigfoot. It’s about a dull American guy who gets kidnapped by Bigfootses (Bigfeet?), but then he realises that he’s much happier living with his Bigfoot wife in a cave than in the city, holding down a boring job.

It’s a story that really tapped into the zeitgeist, and it’s just a perfect mixture of wistfulness, romanticism and sex. 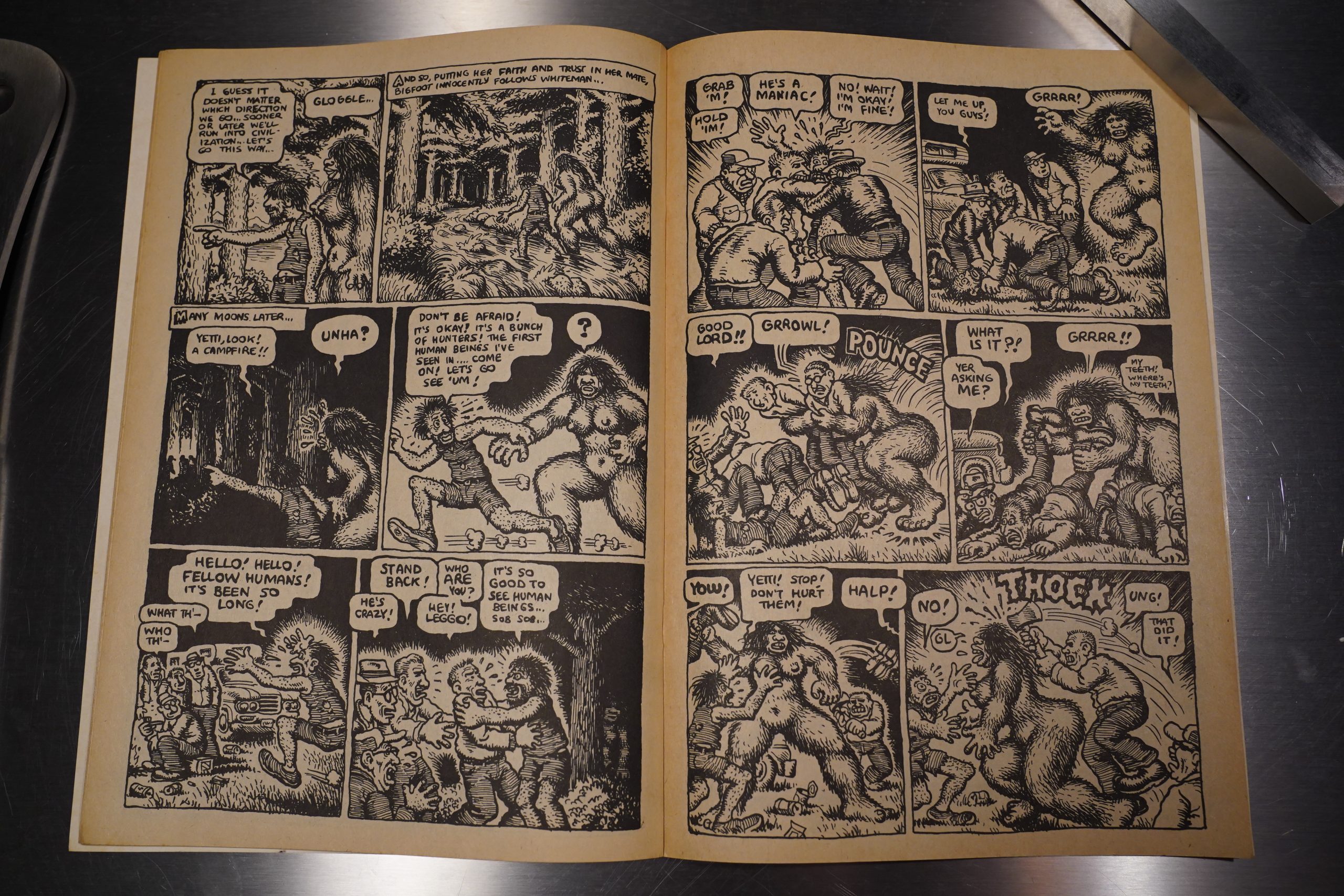 And, man, I’d forgotten how viscerally horrifying civilisation (here represented by some hillbillies) welcomed them back.

The story has been reprinted a gazillion times, and comics.org claims that this book went into 15 reprintings: 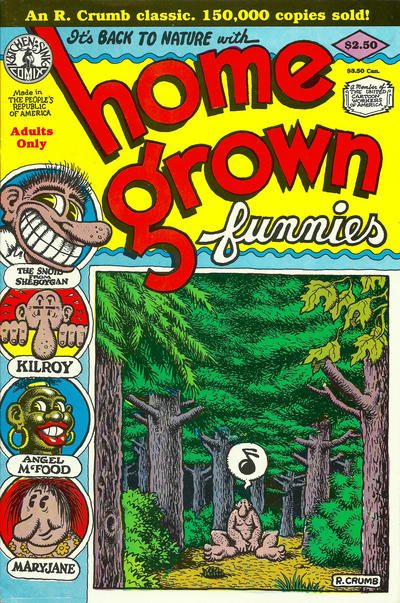 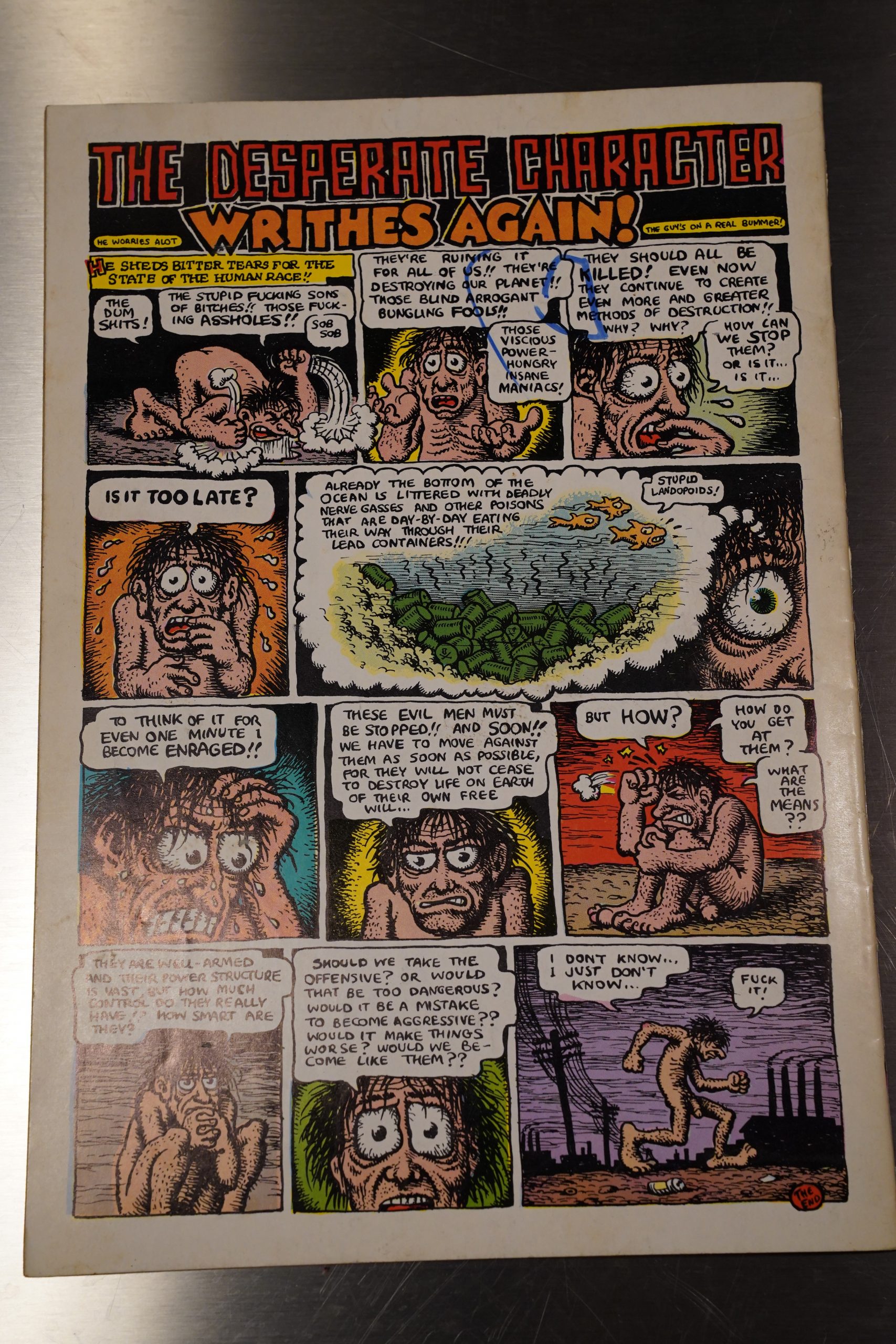 And we end on a note of confusion.

So with this book, Kitchen Sink Comix was suddenly a major player in undergrounds, from being on the margins (both geographically and commercially) for a couple of years.

ROSENKRANZ: Is Homegrown Funnies your
best selling title to date?
KITCHEN: Cumulatively. In fact, we’re just
starting the ninth press run. It’s been a
very steady seller. When it first came out,
it sold very fast, and then it kept selling
very steadily. A book that Will sell well for
over a year is a rare book. The Bijous are
steady sellers. The Bijous never take off,
but you can count on sales every month.
The last Bijou, #7, is still selling well on
the basis of its reputation and the fact
that itk solid.

Homegrown is the gem of the
three, featuring the full-length classic
“Whiteman Meets Bigfoot.” Reportedly
Crumb’s own personal favorite Story, it’s the
most bizarre love story comics has ever seen,
and it may be the most thorough synthesis
of the.most salient ingredients Of Crumb’s
best work—humor, violence, weird sex, and
pointed social commentary. The comic was
first printed in 1971, and 15 years and
140,000 copies later it’s still as fresh and en-
joyable as ever.

The 16th printing of Home Grown Funnies is now sold out, but you can find a newer copy plenty cheap on eBay. It’s one of those “required reading” items in any underground comic book fan’s collection.

This is the seventh post in the Entire Kitchen Sink blog series.