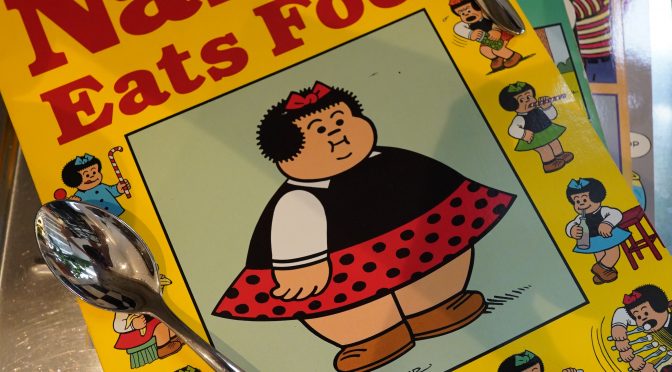 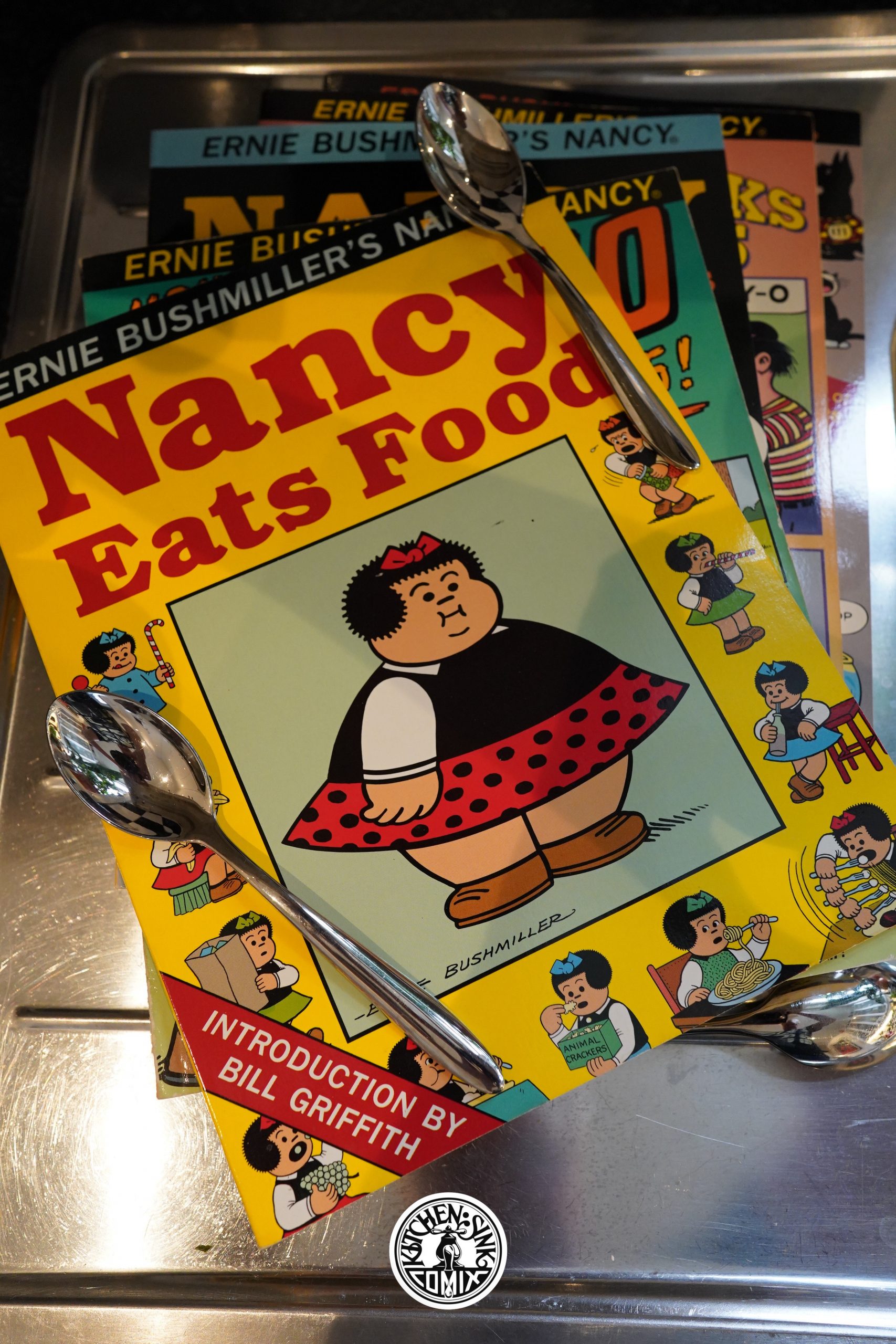 There’s been several books written about Nancy, and I think pretty much everything that needs to be said has been said about the subject, so this’ll be a very quick blog post. 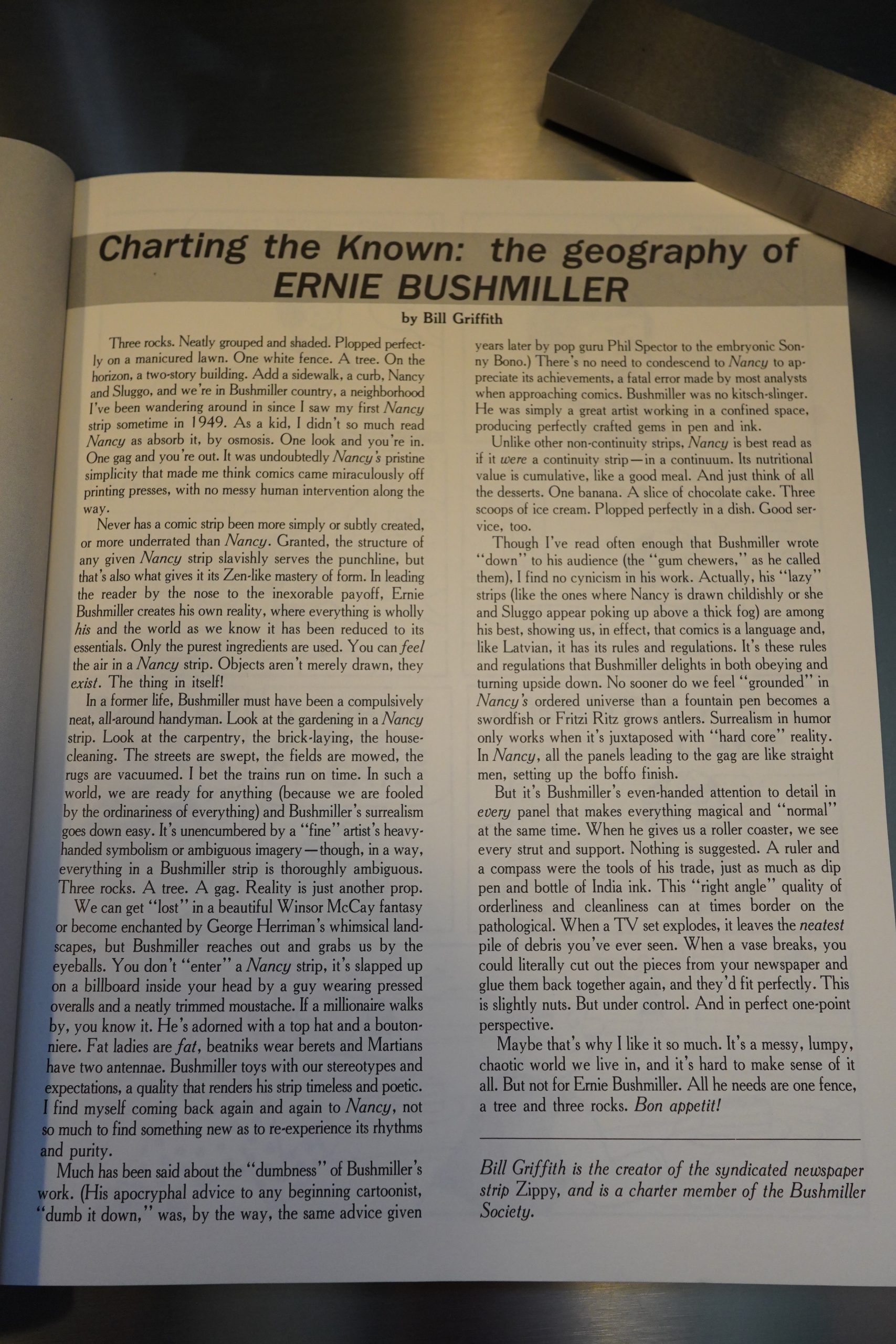 Each volume has an introduction from an artist that talks about the ineffable quality of Nancy, and Bill Griffith does the first one. 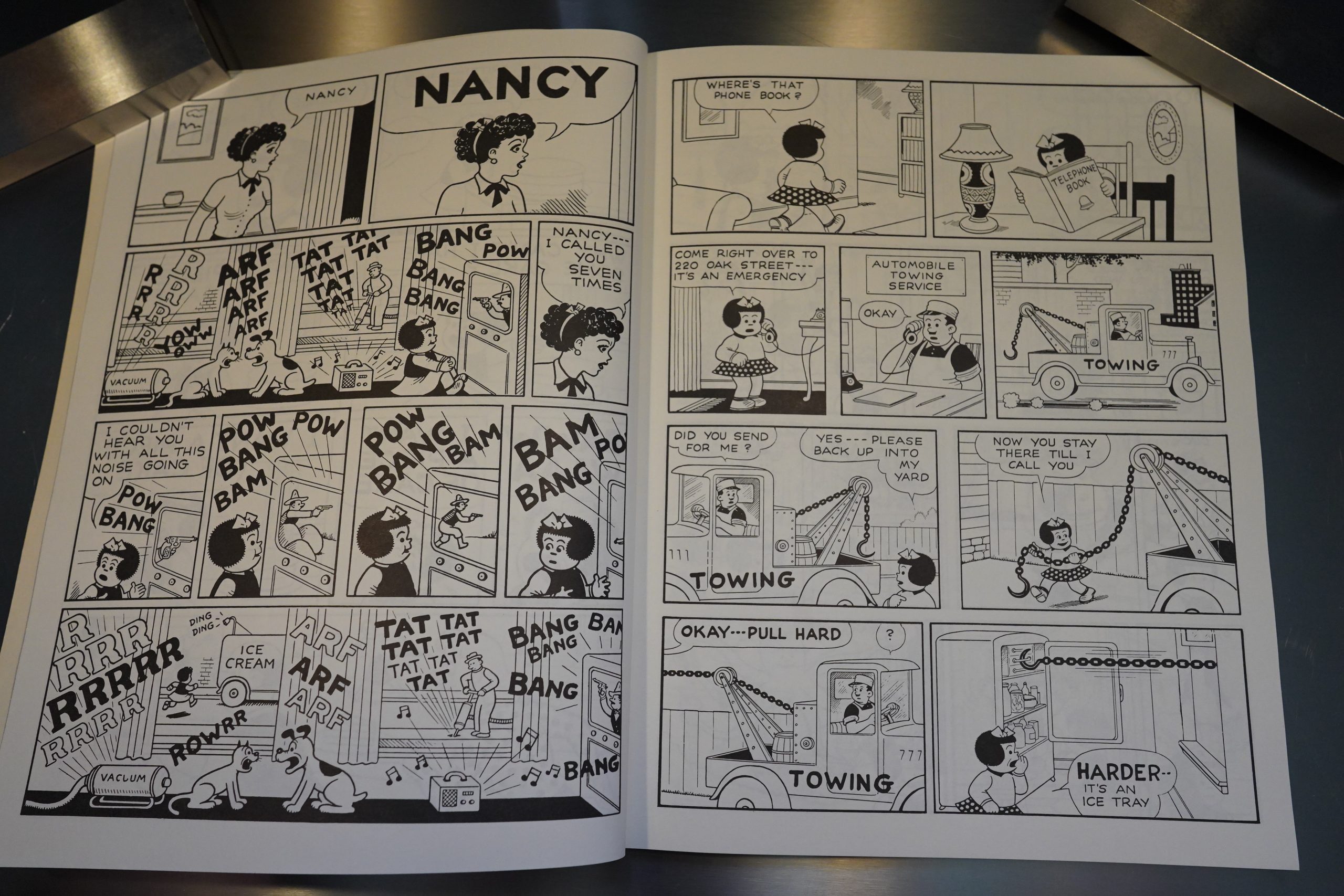 These volumes are arranged by theme. With most strips, that would have resulted in a rather stilted reading experience, but each Nancy strip stands very well on its own, and there’s a timeless quality to the strips, so it’s not too jarring to mix strips that were created decades apart. 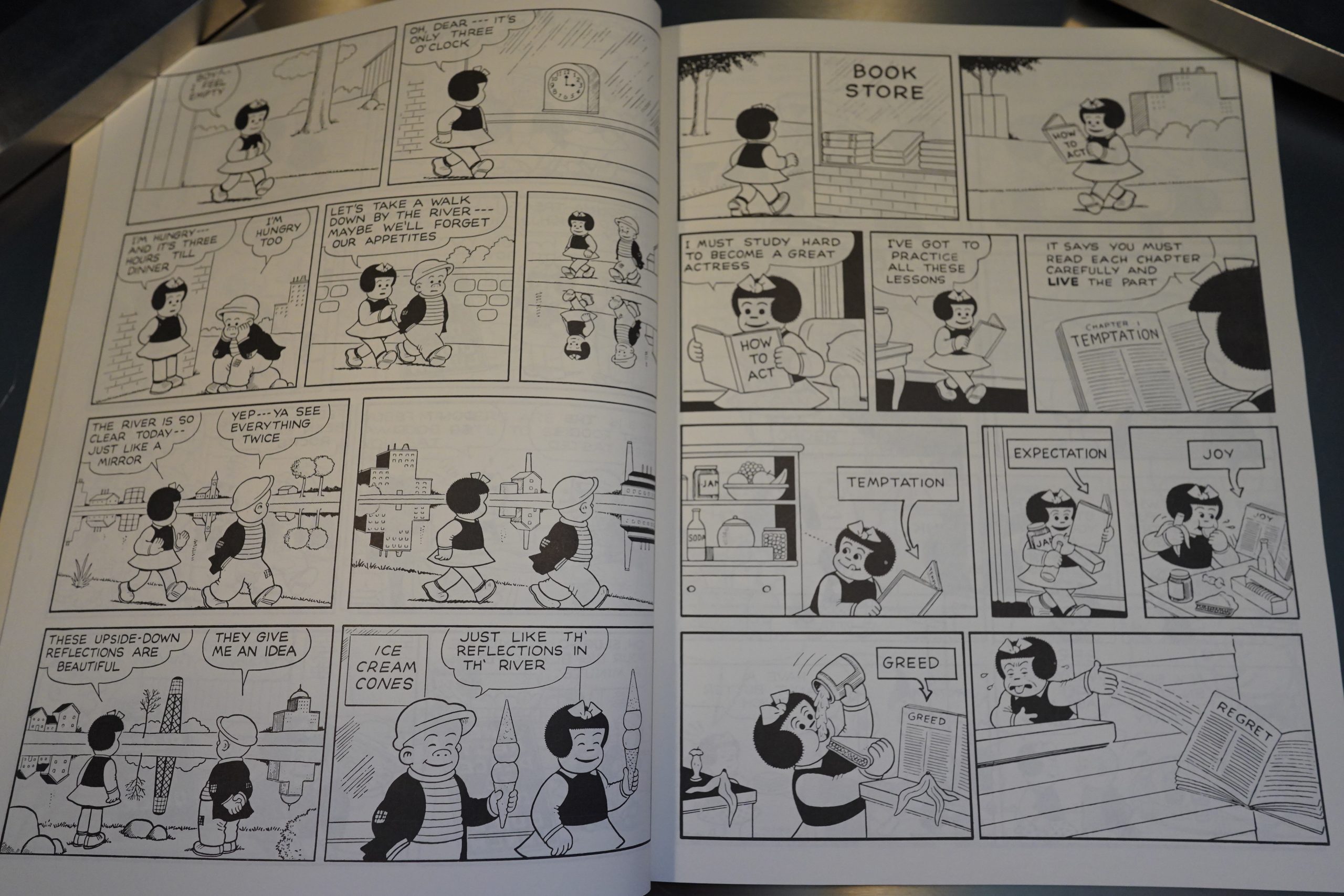 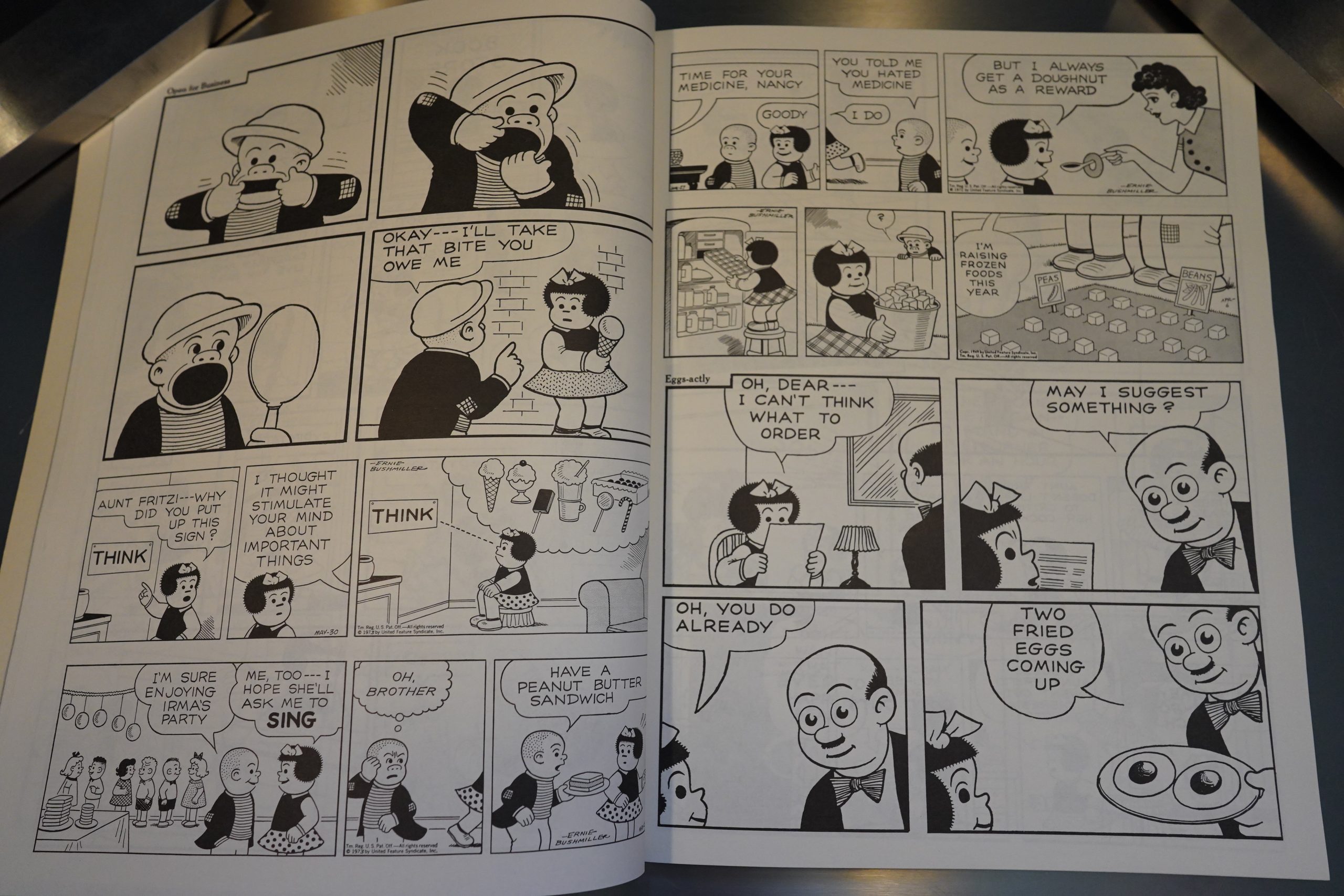 … and also daily strips, which are arranged like this, for the most part. Now, I’ve grown up with newspaper strip reprints that are hacked up any which way, but this does look a bit odd. Perhaps mostly because Bushmiller’s line is so consistent that it looks weird then some of the strips are printed much bigger than the rest, resulting in heavier lines. 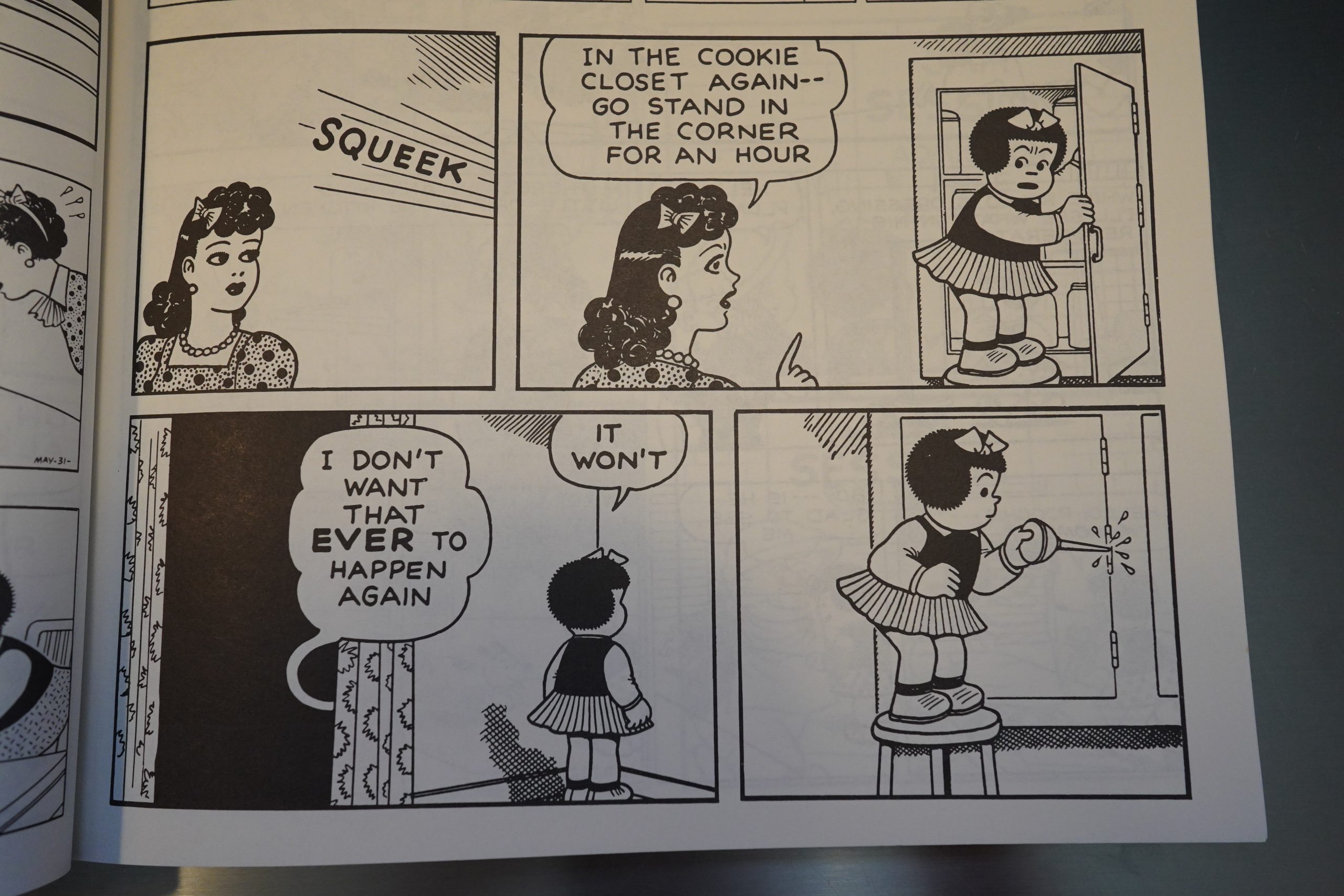 Nancy’s such an anarchist. 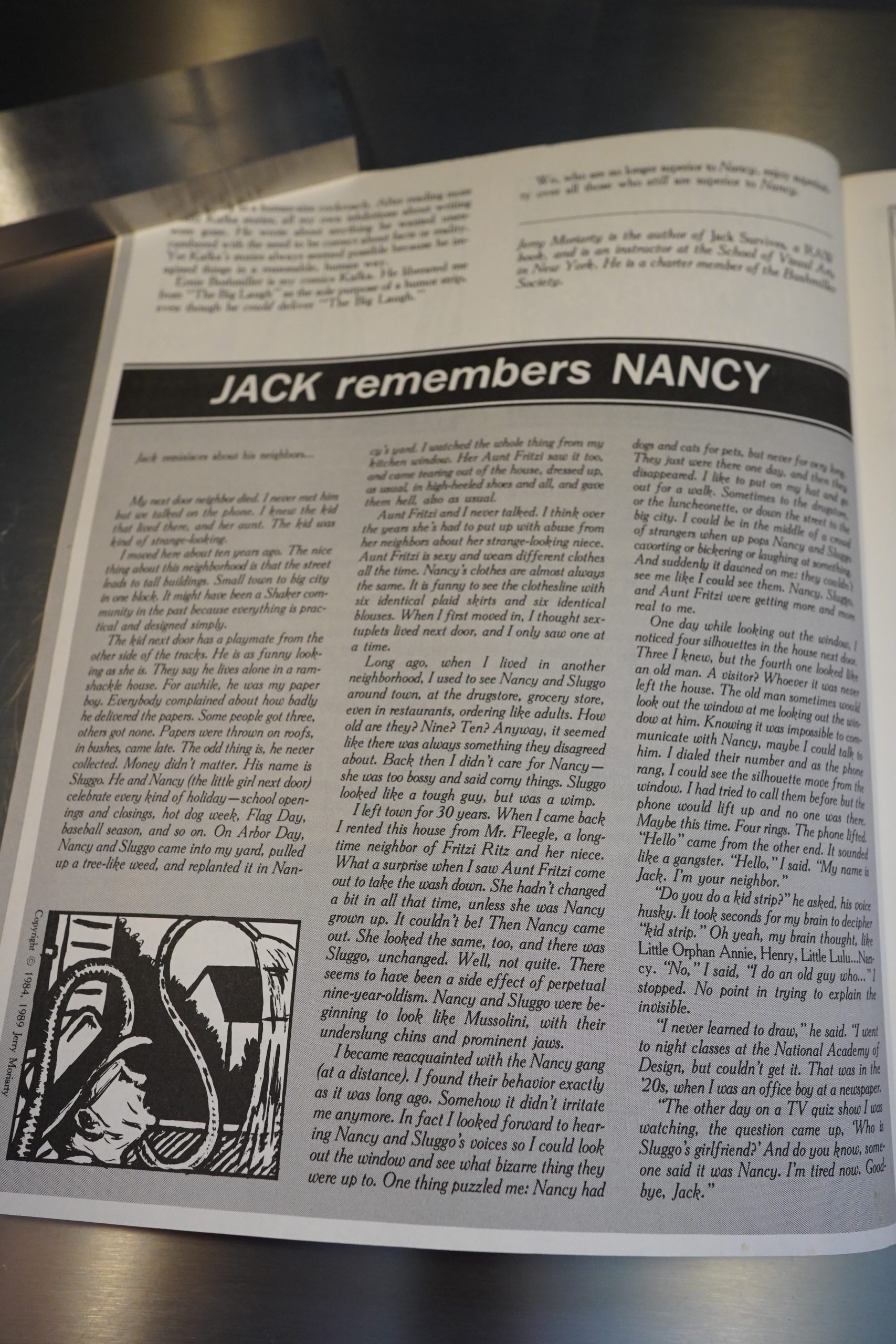 The second volume is called How Sluggo Survives, and they get Jack Survives author Jerry Moriarty to do the introduction. And then he writes a little story, imagining his “Jack” character (based on his father) living next door to Nancy. It’s cool. 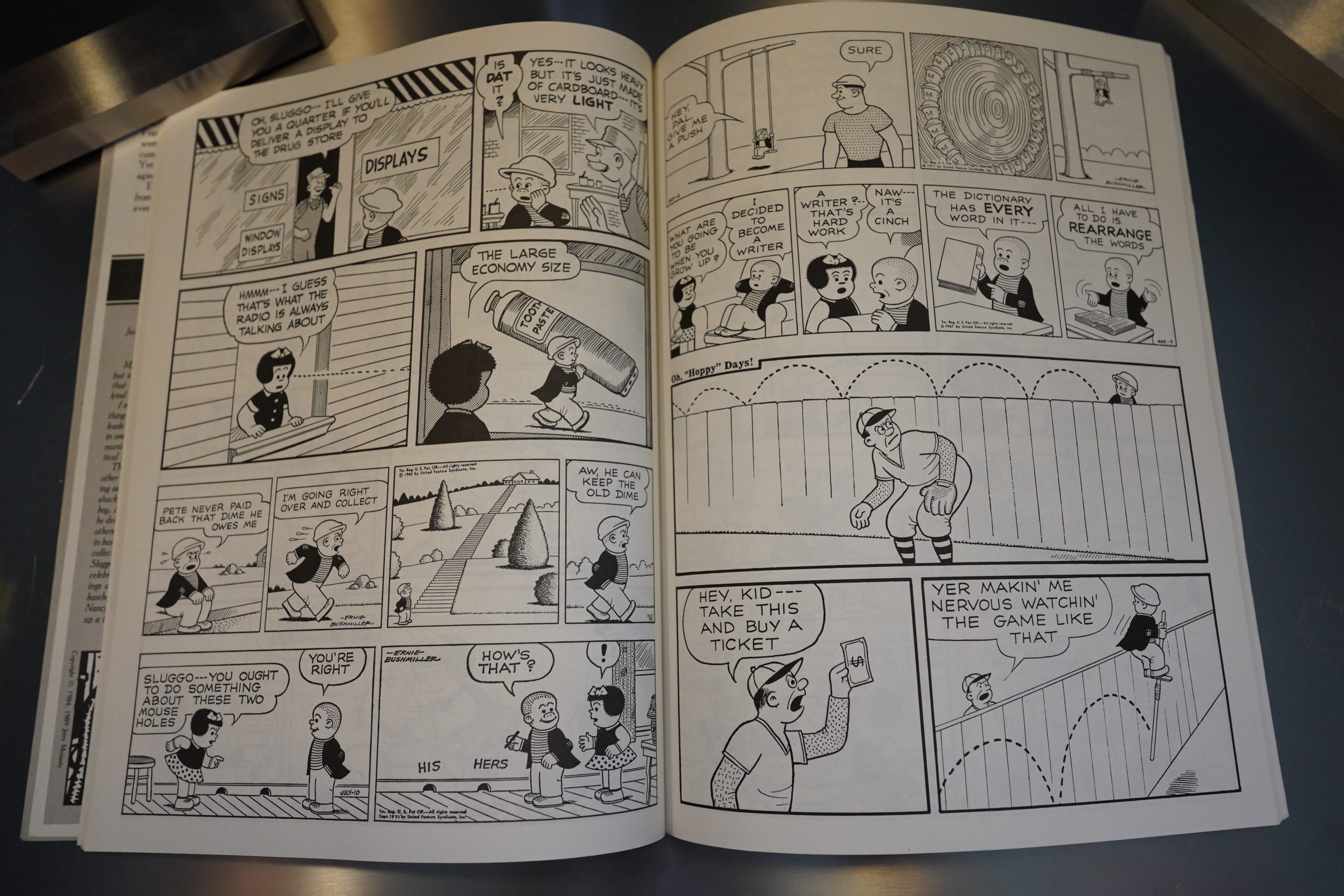 So the first book is about food, while the second one is about Sluggo. 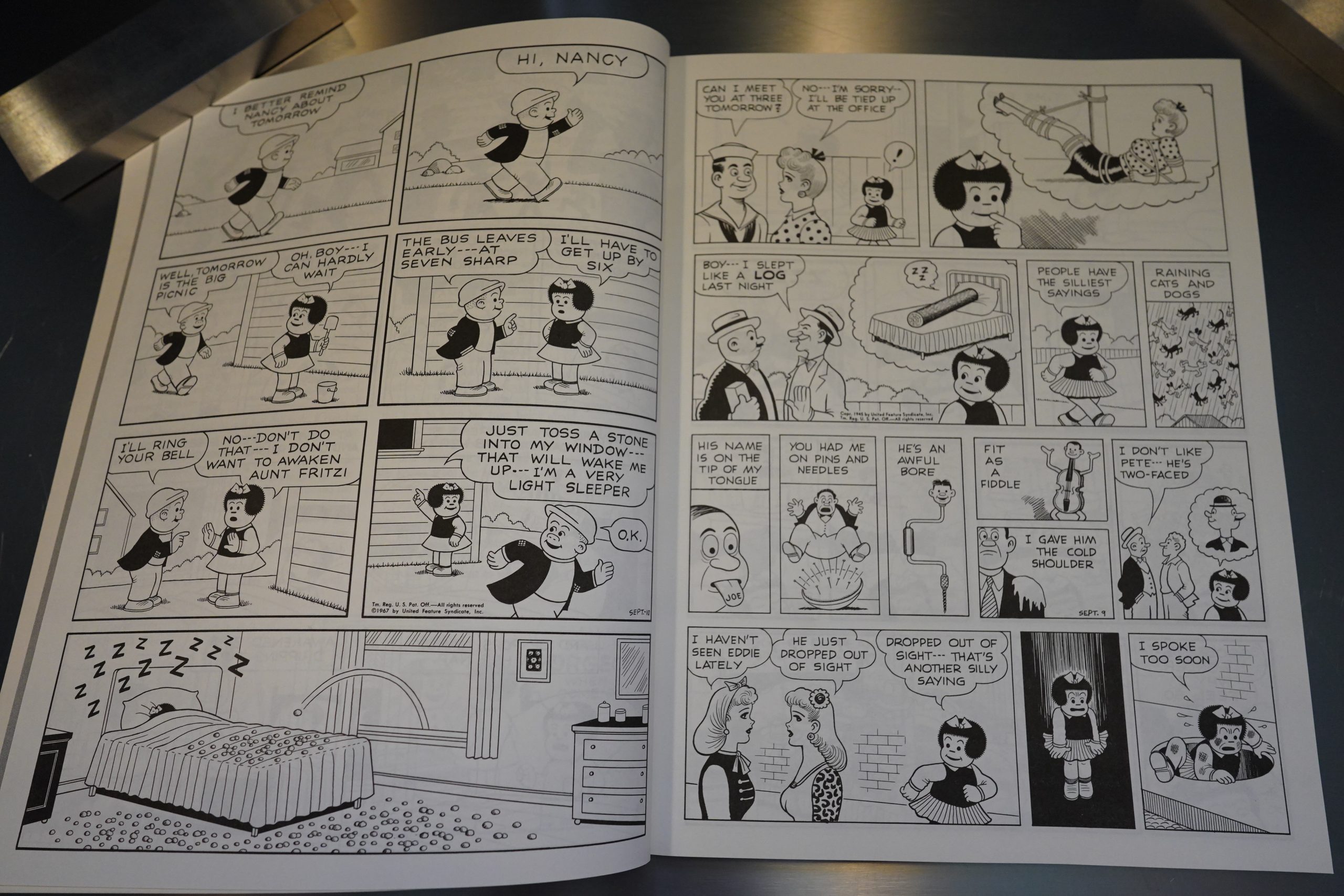 Third one is about dreams and schemes… 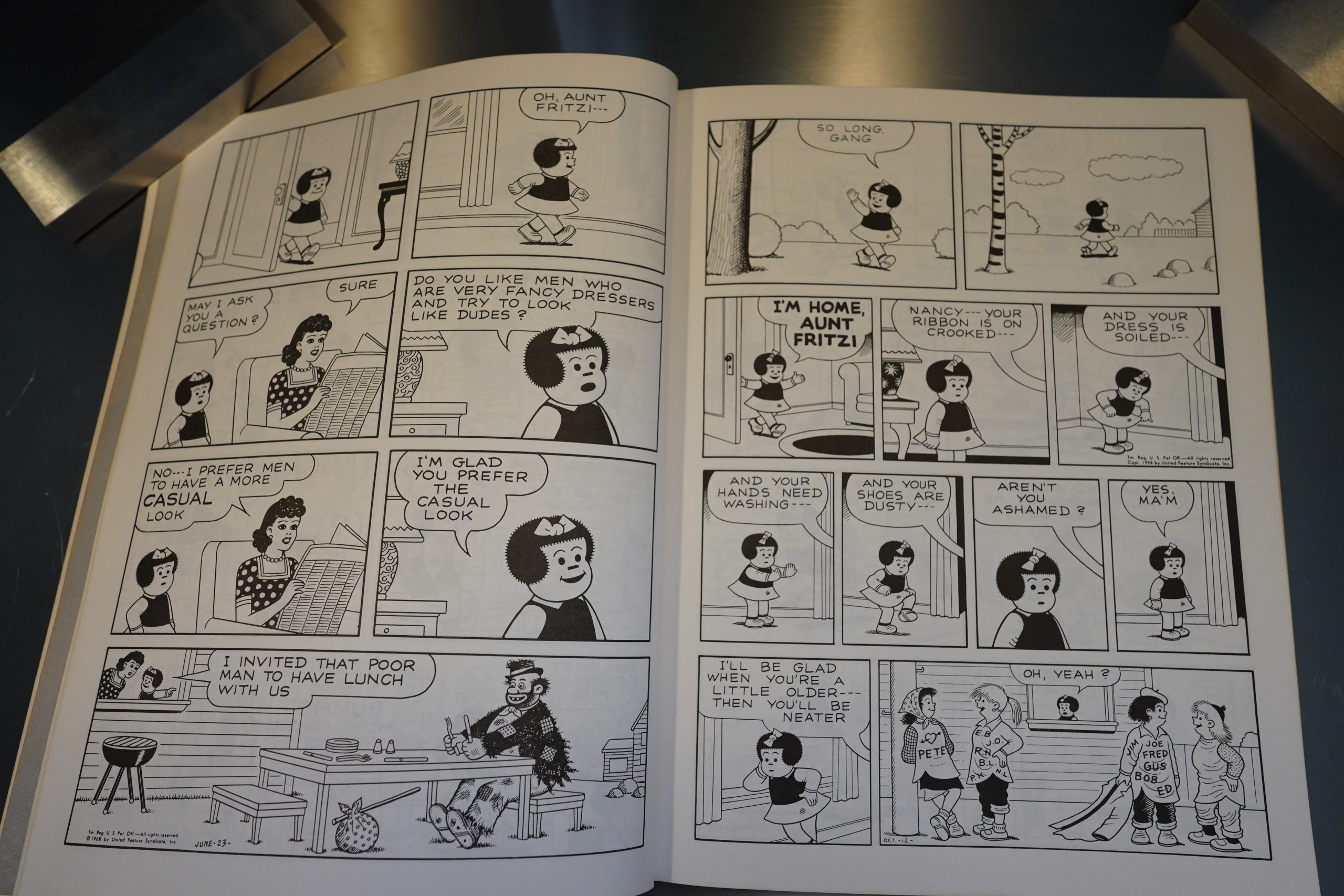 The fourth one has two themes: Hoboes and beatniks… 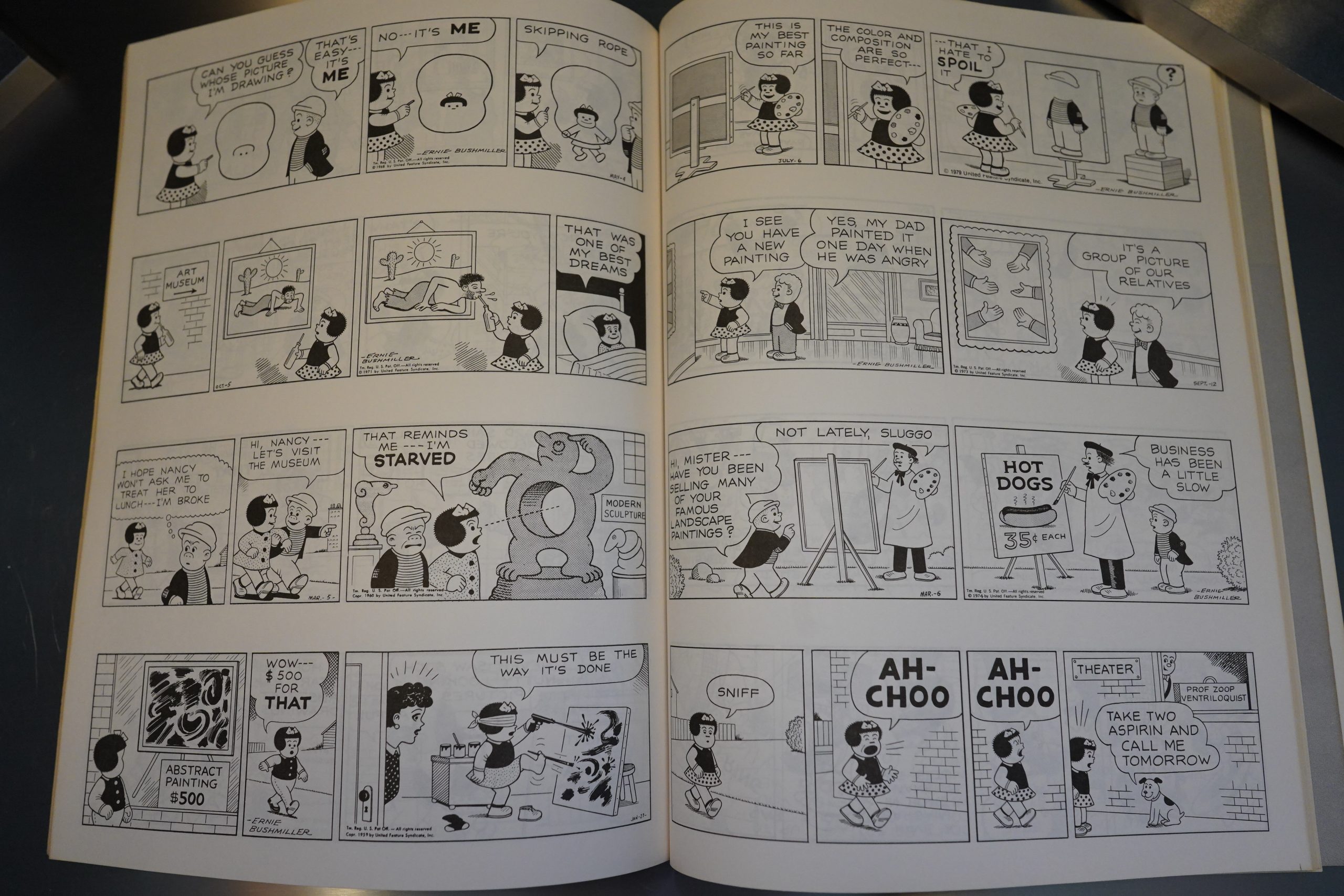 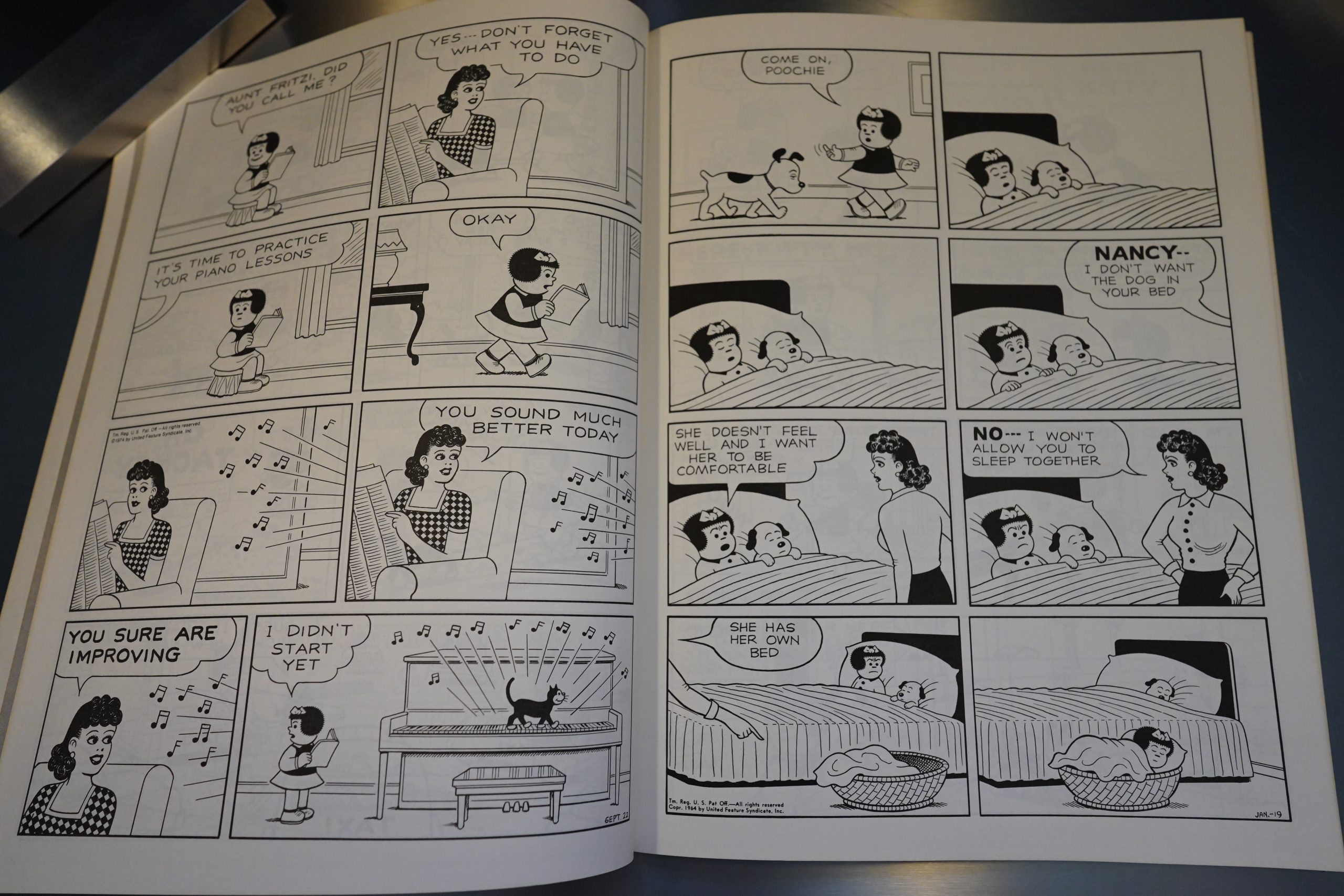 And the fifth and final volume is about pets.

These books are well put together, and the reproduction is good.

By the end of his career, Ernie Bush-
miller had become a prime example
of a stranoe species peculiar to pop
culture, a species that includes aniong
its mernbers Liberace, Tammy Fae
Bakker, and Tiny Tim: people so peur-
ile and yet so inexplicably successful
that their names become nationwide
punchlines. But most people who join
that species do so by appearing on tel-
evision, were by definition they’re try-
ing to call attention to themselves.
Bushmiller did it by writing and draw-
ing a particularly annoying comic strip
called Nancy—an activity which usu-
ally wouldn’t be expected to make any-
body’s name a household word. But
people knew who Bushmiller was.
Comedians were abe to use him in
routines. Saturday Night Live put him
on a list of people dolphins are defi-
nitely more intelligent than. When, a
few years ago, a small magazine I
wrote for at the time published Iny list
of 52 People American Would Like To
See Taken Hostage By Iranians, the
only way I knew anybody had read the
damn thing was the literally dozens of
people who congratulated me on put-
ting Ernie Bushmiller’s name on the
list,
I don’t know what possessed Kit-
chen Sink to publish an anthology of
Ernie Bushmiller’s cartoons dealing
with food. It might have been sheer
perversity: this is admittedly the sort
of idea that causes gikgling fits at three
o•clock in the morning. ()r it might
have been outright meanness: Nancy
relied on an exceedingly small number
of jokes, most of which were repeated
again and again to dimishing effect,
and deliberately showcasing one par-
ticular kind of joke is an extremely ef-
fective way of bringing the strip’s in-
herent redundancy into sharp relief.
For instance: On one page, Nancy
(who, incidentally, resembles a clerk
at the office where I Susan)
asks permission to eat some choco-
lates, and promises her Aunt Fritzi
that she’ll only eat one. She rearranges
about 3() of them into a big spelled-out
“one”, and eats them all. On another
page, she promises her aunt she’ll eat
salad and soup for dinner, and spells
out the words “salad and soup” with
spaghetti. And on a third page she
complains there’s a hair in her soup.
There is. The word hair in alphabet
letters. The joke wasn’t funny the first
time. The third time it makes us won-
der why Aunt Fritzi didn’t just kill the
little brat; with this anthology as her
defense, no jury in the world would
have convicted her.
Recently, an unbelievable number
of otherwise respectable people have
cited Bushmiller as a major influence
on modern an; one, Zippy the Pinhead
artist Bill Griffith, provides this vol-
ume with an introduction that gushes
eloquent about Bushmiller•s spare but
extremely polished drawing style. I
can kind of see his point there. But
nobody ever said Bushmiller couldn’t
draw—only that his comic strip was
painfully stupid.
In any event, if this anthology
proves nothing else, it’s that Nancy
was a prime candidate for bulimia.

But what does he really think of the strip?

Ernie Bushmiller’s Nancv seems to be
one of these things that people either
really like or really hate. I used to
think that it was the stupidest comic
strip ever created. But after Bush-
miller died and Jerry Scott took the
strip over, it quickly became apparent
just how good Ernie really was.
While I’m not ready to proclaim
Bushmiller a creative genius, I have
come to appreciate Nancy’s bizarre
charms. Whether he did it intention-
ally or not, Bushmiller’s characters
occupy a surreal little world, where
everybody and everything is drawn in
a tidy, clean-line style, and the same
dumb jokes and situations keep work-
ing over and over and over.
Nancy’s Pets is the fifth volume in
Kitchen Sink’s reprints from the
series. Each Nancy book is centered
around a theme (food, Sluggo, pets,
etc.), which makes more sense than
a chronological reprinting of the
strips, since the series has no real day-
to-day continuity. 9/hile you’d think
that 90 pages of cartoons on the same
topic would be overkill, grouping the
strips this way gives the books focus,
and helps to showcase the series’
quirkiness.
Each Nancy volume begins with a
short essay on Bushmiller and his
work. The essay here, written by
Bushmiller’s neighbor and friend
James CarlsSon, discusses the Bush-
millers’ pets, and reveals that some of
the animal gags used in the series were
based on actual incidents involving
Ernie and his wife. Illustrating the
piece is a photo of the Bushmillers and
their dog, and a few of the family’s
Christmas cards. It’s a nice “behind
the scenes” sort of thing.
As you would probably expect from
the book’s title, the strips in Nancy’s
Pets involve animals—Nancy’s pets
(which include a dog whose spots
keep changing), Sluggo’s pets, and a
large assortment of birds, mice, and
animals at the zoo.
Series editor James Kitchen has
chosen a nice mix of daily and Sunday
strips that are mostly from the ’60’s
and ’70’s, and presents them one
Sunday or four dailies per page. The
care and quality in the presentation of
this material is consistent with the
high standards set by Kitchen Sink in
their other reprint projects.
Bushmiller•s work employs a gentle,
sincere humor, and his love of animals
is very apparent in this book. Like the
previous four Bushmiller collections,
Nancy’s Pets is full of simple and
timeless gags that you can’t help but
get a smile or a chuckle from.

Seems like sentiment had already begun to shift, and perhaps these reprints were what started Bushmiller’s journey into Acclaimed Genius status?

This is the one hundred and tenth post in the Entire Kitchen Sink blog series.