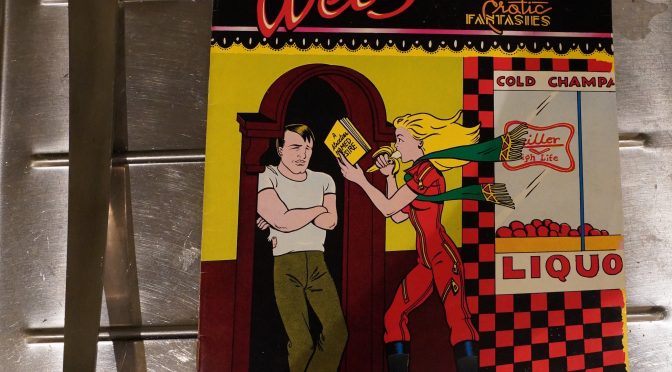 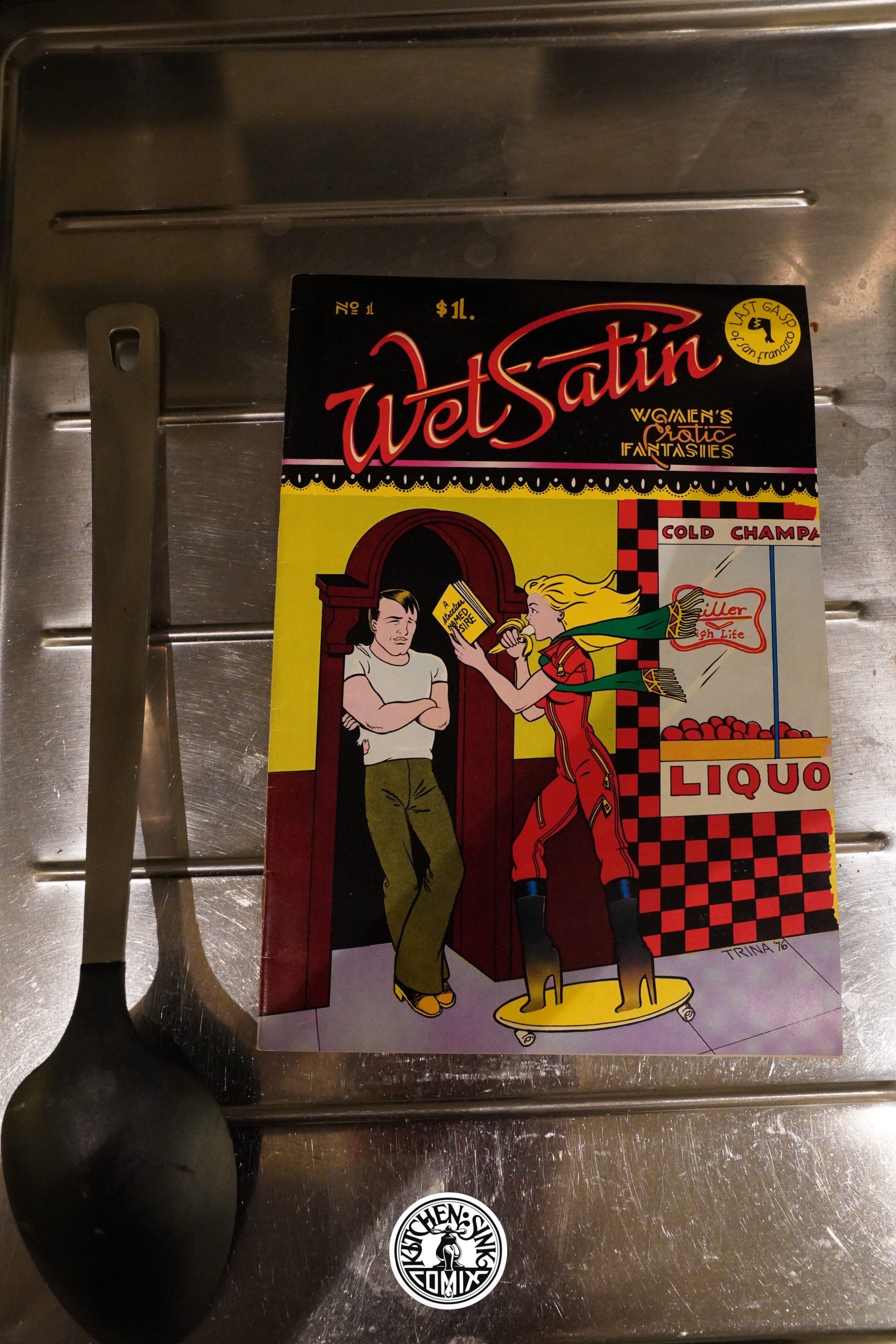 I’m not sure what the story was behind that, and ComixJoint mysteriously doesn’t list this series. 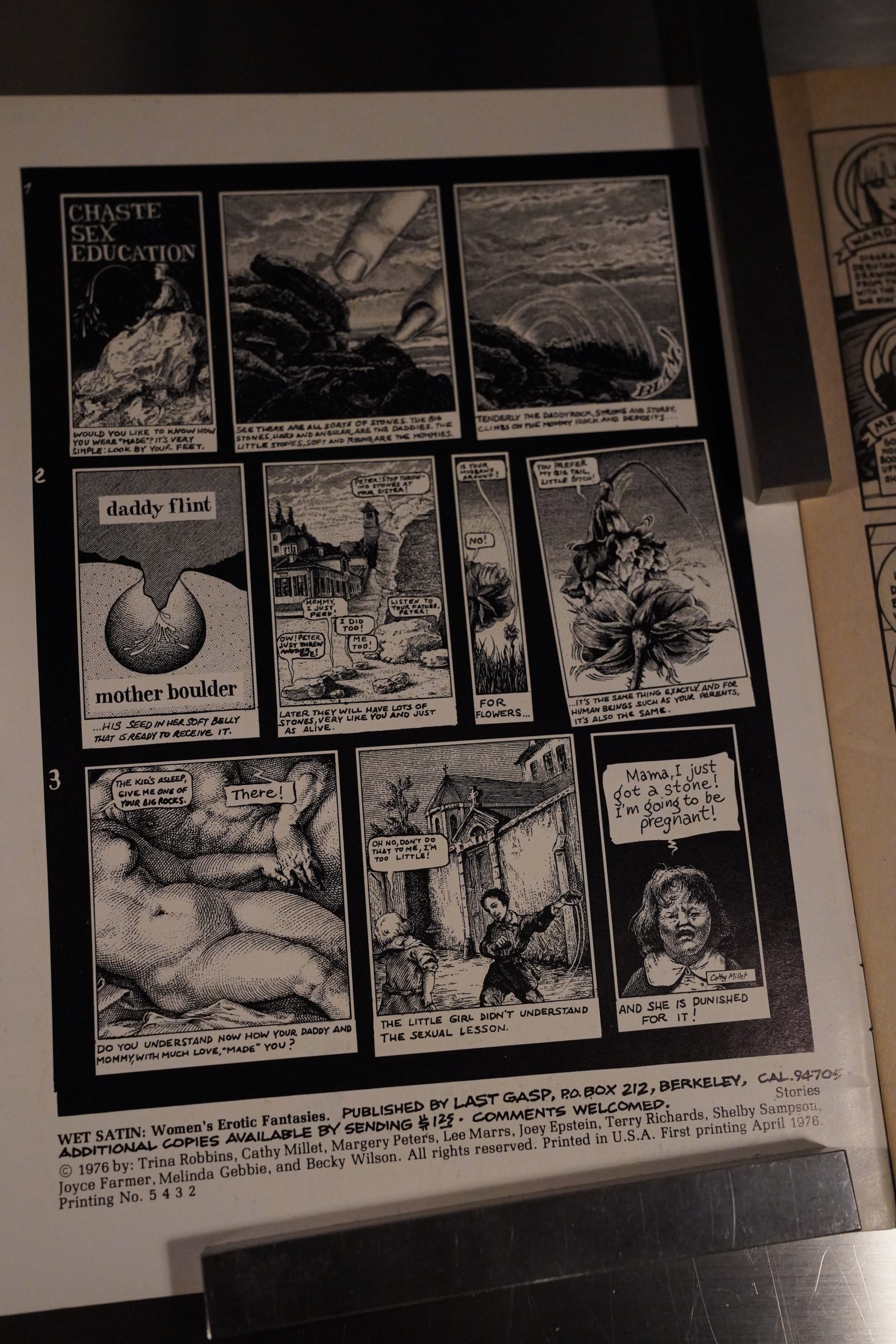 We start with a very edumacational page by Cathy Millet (a pen name for Christian Roux, but if I understand correctly, that wasn’t well known by people in comics at the time). 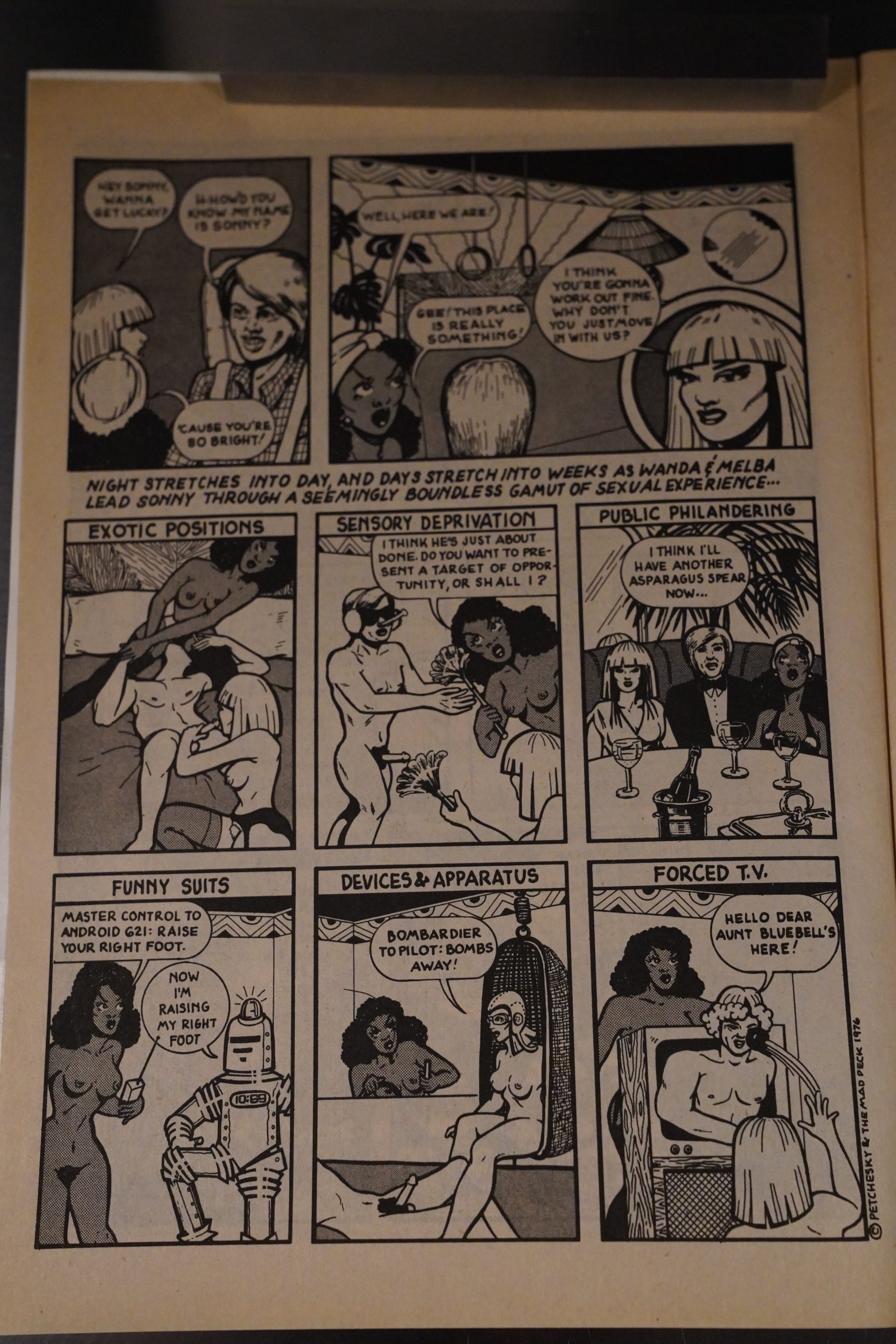 There’s a mixture of approaches here. I don’t know who Pechesky and The Mad Peck are, but they go for humour. 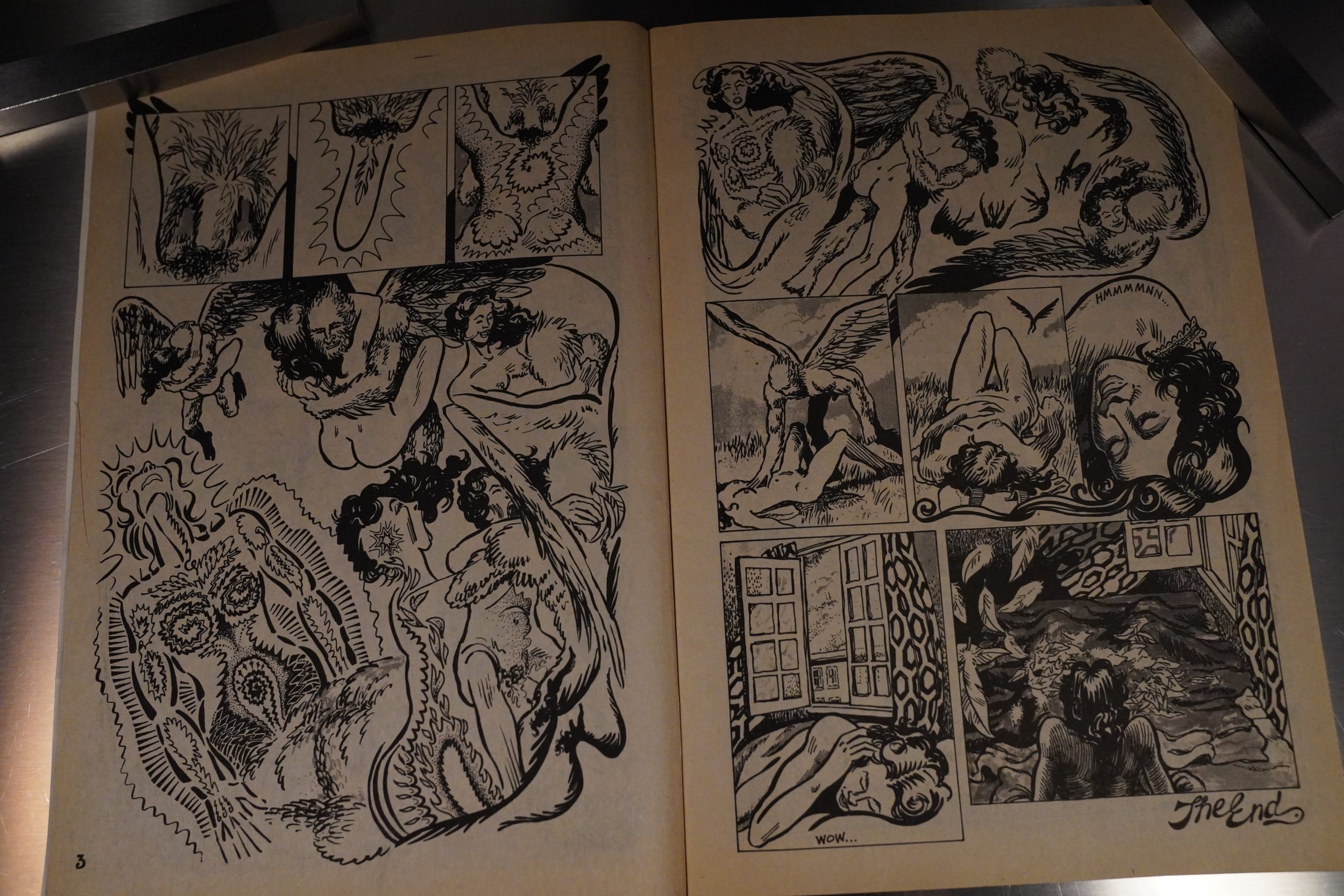 While Lee Marrs go for a kinda-not-that-explicit fantasy. 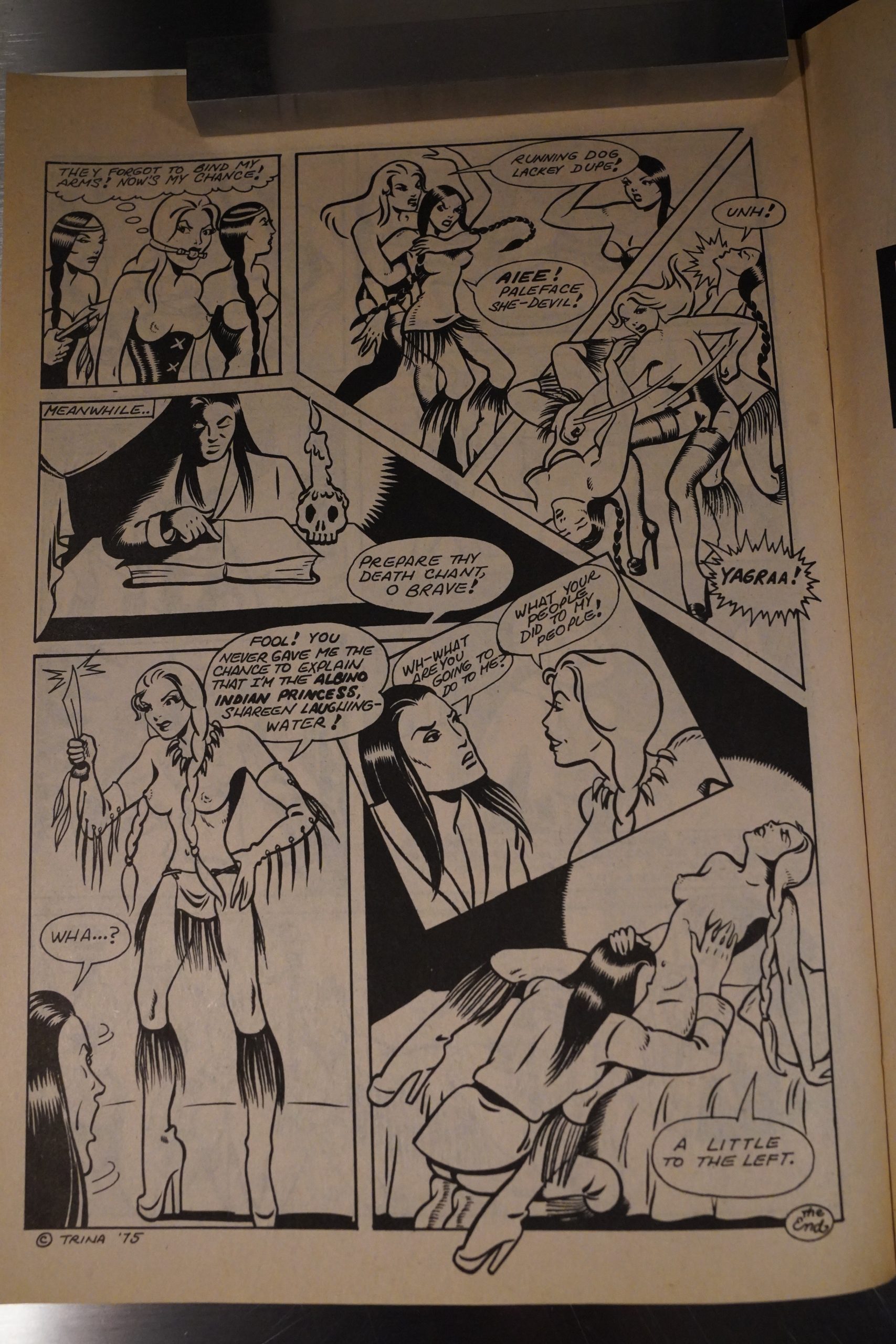 As usual, Trina Robbins brings a plot and a twist. 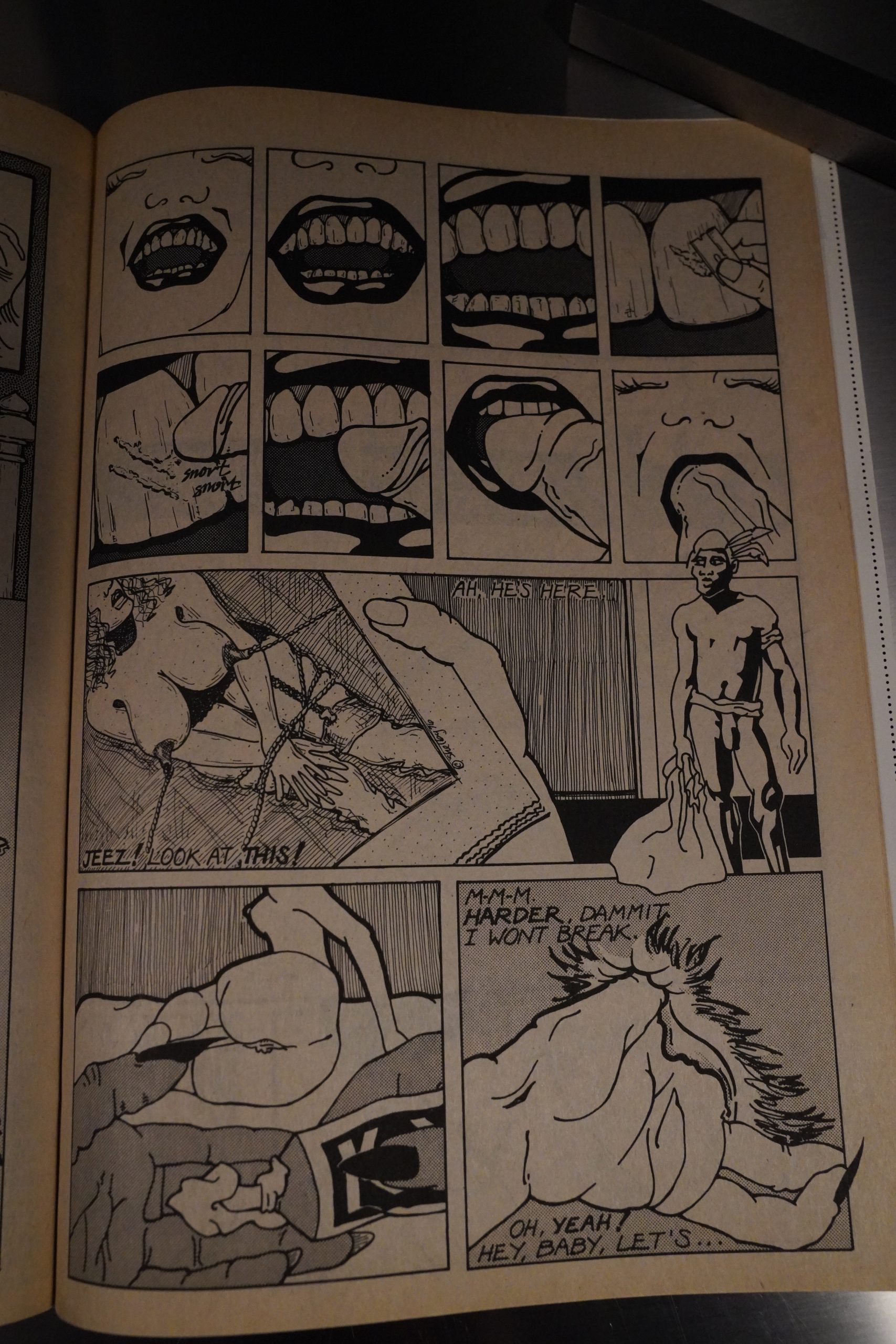 Shelby Sampson extols the pleasures of using coke and having sex. 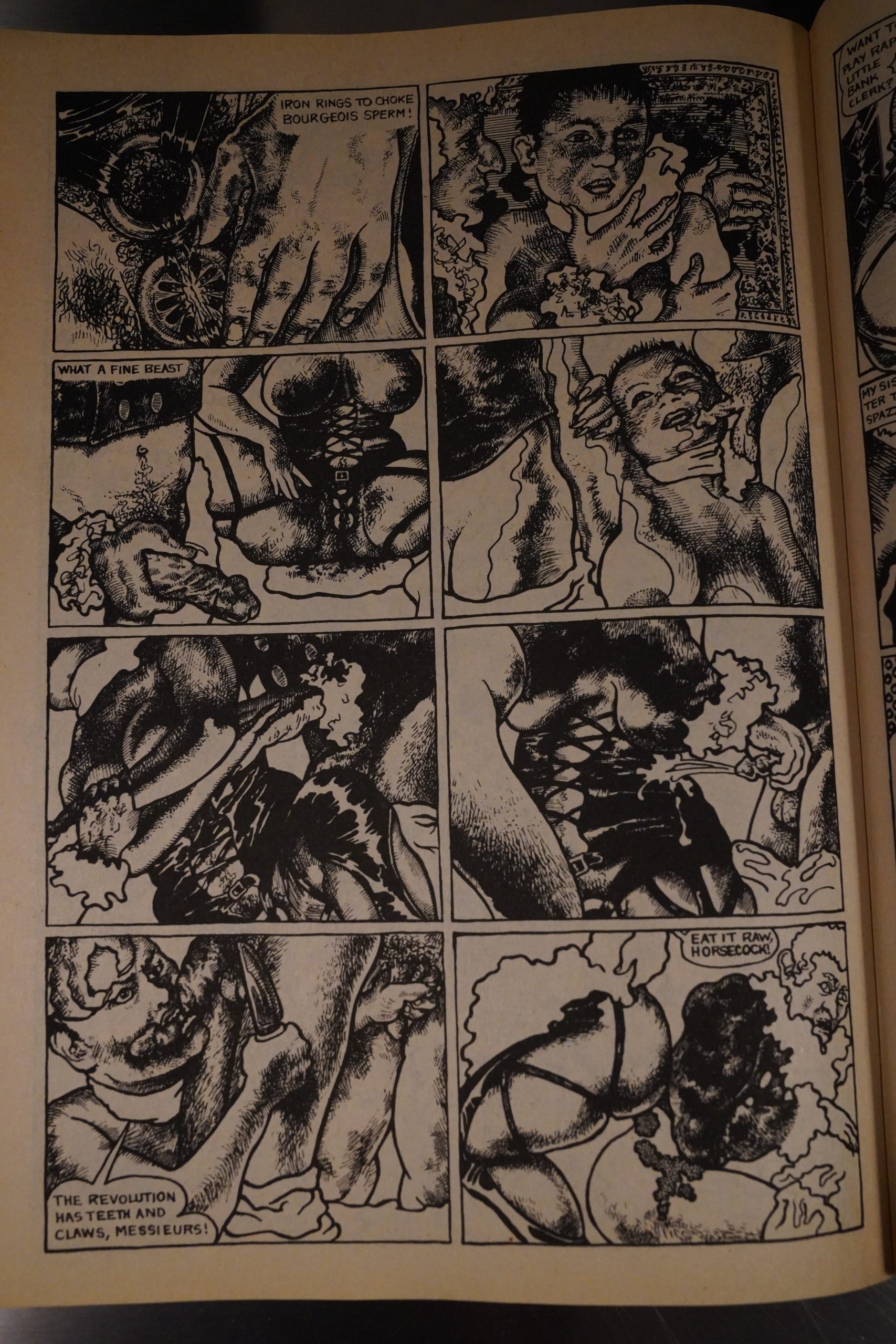 And as usual, Melinda Gebbie … doesn’t just go all the way, but beyond. This is the least rude page. I don’t want to get this blog arrested, after all.

OK, I was going to do the second issue of Wet Satin, too, even though Kitchen Sink didn’t publish that, but it’s still in the mail.

Robbins is interviewed in The Comics Journal #53, page 54:

SHERMAN: Wet Satin ran into a lot Of trouble getting
printed.
TRINA: so did wet Satin #2.
SHERMAN: I haven’t seen #2. yet.
TRINA: Oh, you must see it: I’ve got one of the classic
stories in there in which the male protagonist is the enemy
but he’s really lovable.
SHERMAN: Could you recap the difficulties you had?
TRINA: The printer, who was the midwestern printer
who has printed all of Krupp’s comix.
SHERMAN: Including Bizarre Sex?
TRINA: Including Bizarre Ser. Which 1 use as a classic
example because there was one cover of Bizarre Sex where
the cover was so awful it actually had to be covered with
a white paper cover on the stands. (Bizarre Sex
Came from Alpha Centauri Looking for Love , ” which had a
giant vagina attacking a city skyscraper. I He was willing
to print Bizarre Sex , but he wouldn’t print our book. He
called it pornographic. And when he was asked why this
was pornographic and not Bizarre Ser, he said, “Well. men
draw Bizarre Sea.” These are his words. t’ It was all in
fun. It was a satire.” And Wet Satin wasn’t a satire; it was
taken seriously. Yet, we have this review from Screw—I
have an editorial in Wet Satin #2 and in there I say that
Screw , which is by no means a feminist journal, gave us
this fabulous review in which they said that the whole
reason that Wet Satin was so good and what saved it from
being a really dreary feminist diatribe was the fact that we
all had a sense of humor and we were able to poke fun at
ourselves and that it was satire, that it actually was fun-
nier than the men’s books. So you see we’ve been censored
in the miawest.
SHERMAN: so #2 has been printed by. ?
TRINA: Last Gasp.

Ah, so that’s why they changed printers — the printer Kitchen used just wouldn’t print it.

This is the thirty-fourth post in the Entire Kitchen Sink blog series.